Shadows over the outpost 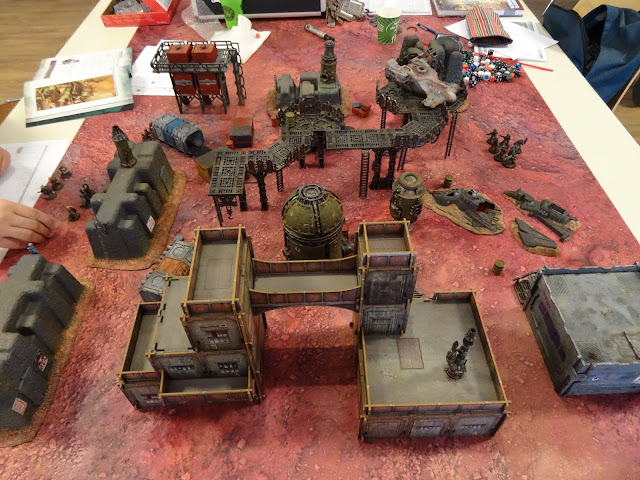 Following the adventures of Inquisitor Greyfax last Saturday, I got to play a few games of Shadow wars with my Shadow Legion.

For the record, they were played as skitari just because it was the closest thing I could find and it did work very well although I had to learn to play them in the first place.

The Shadow Legion has been contracted by guard an outpost where a delivery of a high importance is to arrive. They do not know the nature of what they're supposed to guard and they do not care, the orders were simple : kill all thos too daring, curious or careless to come nearby... 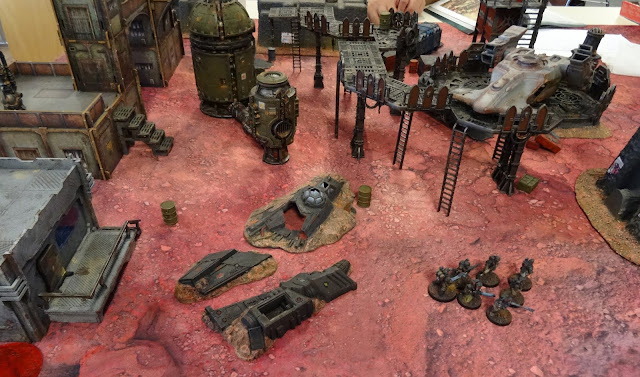 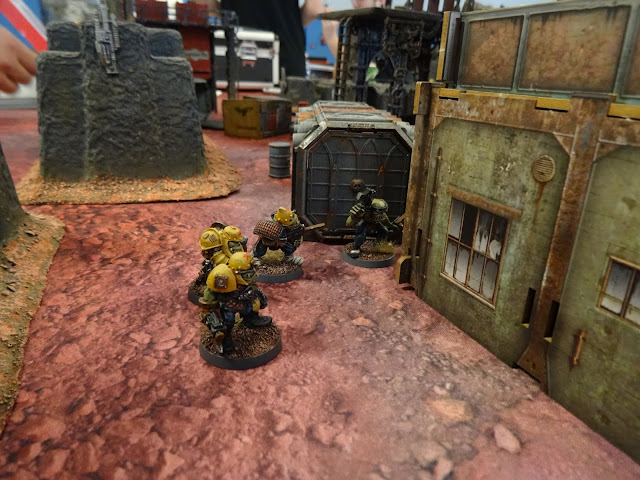 With their usual careless approach of things, the orks got in the place and proceeded to the landing pad. 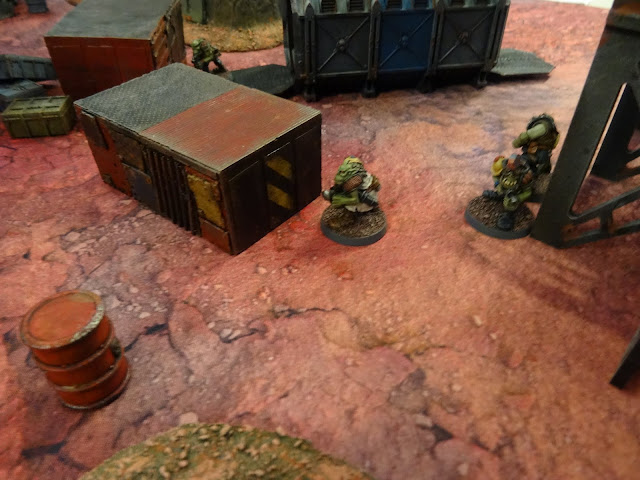 The amount of crates and containers all around was fueling their ambition to the max, they'd surely win a lot on this hit. 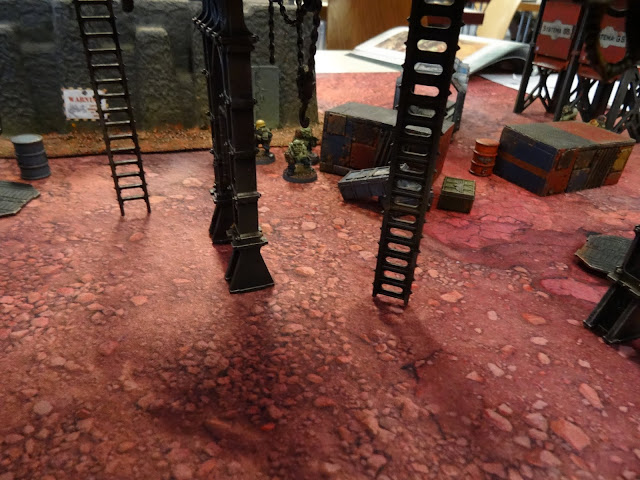 Other place, other time, they did not sense all of the setting was a trap laid by the legion... 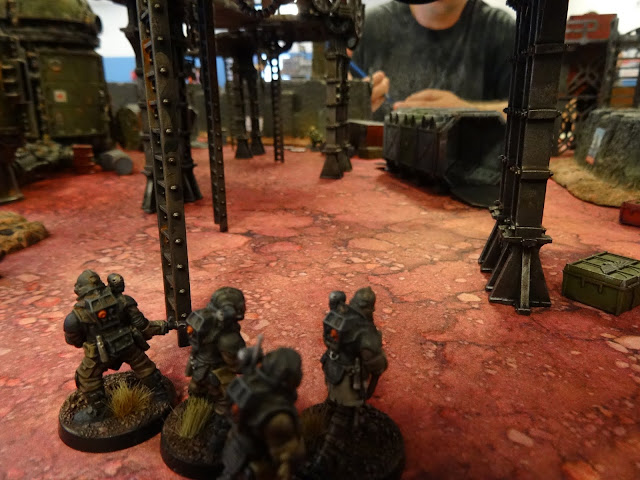 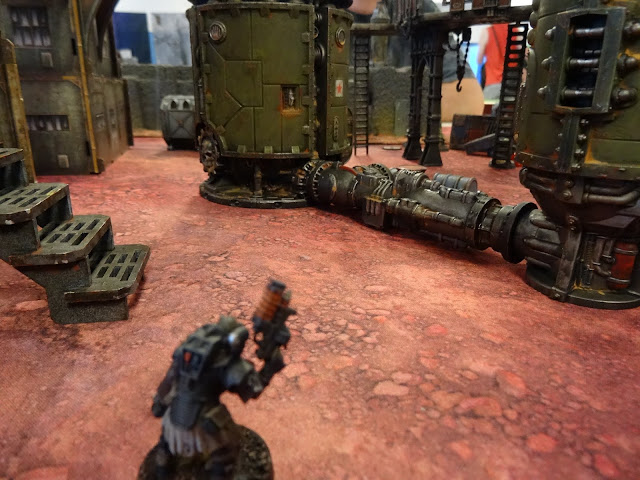 The decoy craft was guarded to force the orks out of their covers... 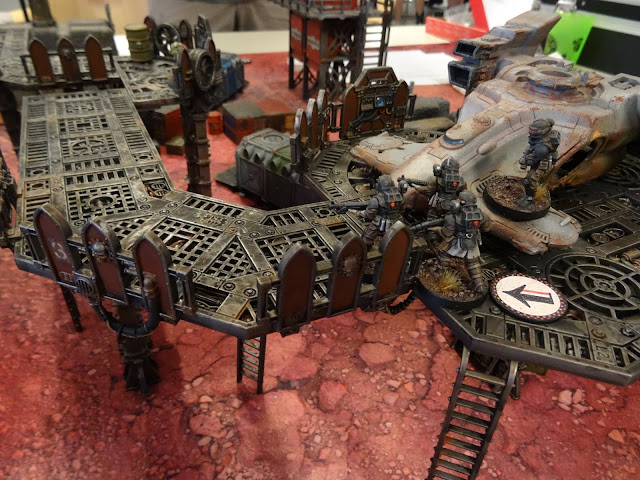 High on their feeling of superiority and probably some other sources, the orks move closer to what they thought was their objective... 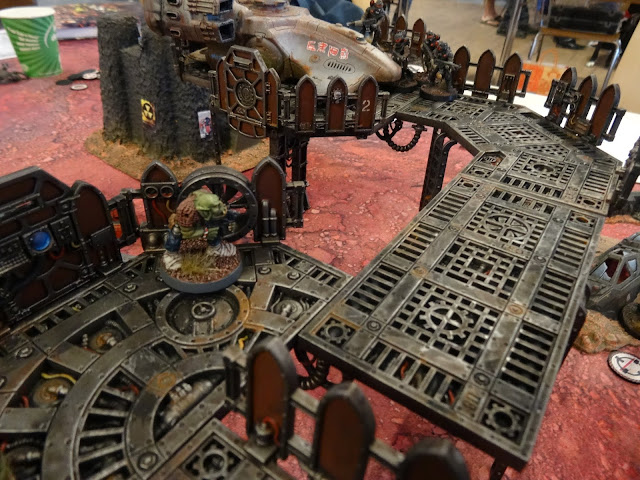 The ork scout should probably have examined the barrels laid all over the place though, he might have realized they were all explosive and placed at strategic points.
The troopers underneath would learn the same lesson the hard way... 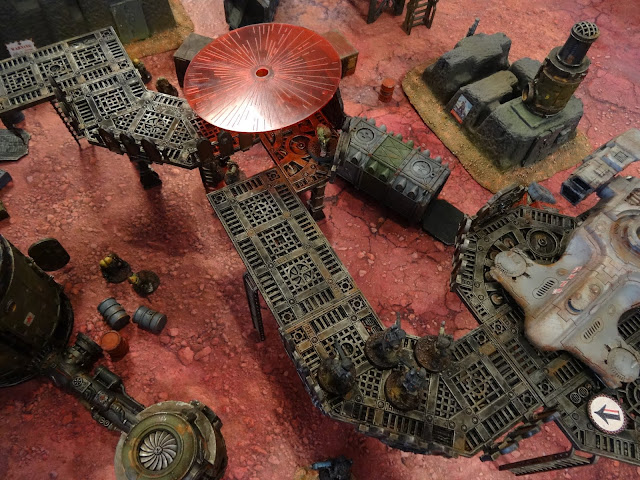 With a gruesome smile hiden by a mask, the Legionnaire with plasma carbine aimed at the barrels of Prometheum... 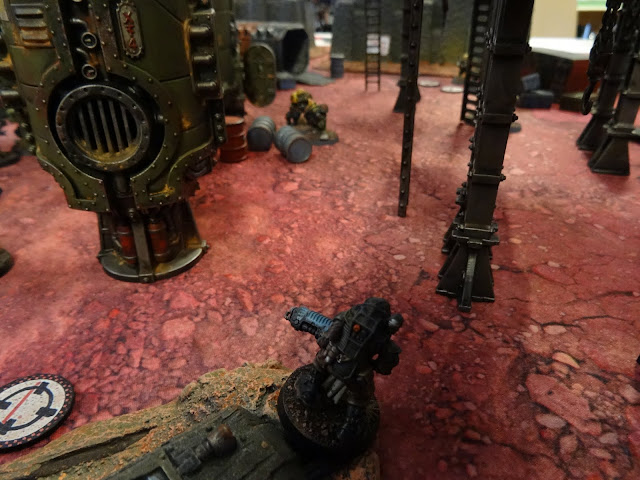 Meanwhile, another of the invaders who had decided to climb up the platform got thrown out of it by a volley which made him jump to escape the shots... only to fall 10m below... 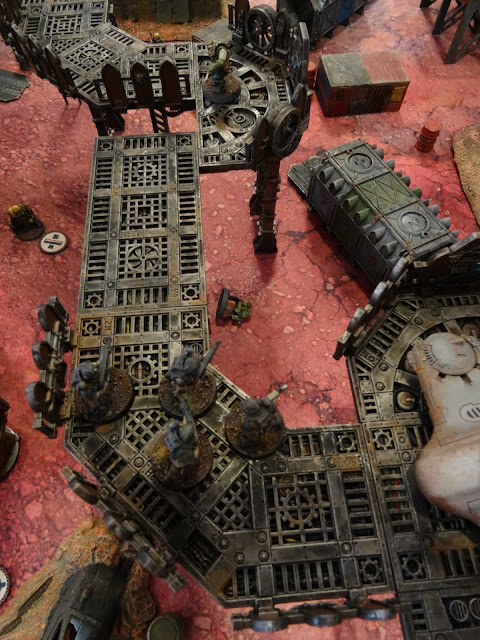 With his plasma weapon jammed, the specialist decided to stop the charge of the ork coming from the flanks on his own.
The orks had already suffered too many hits to continue any further and even their flawed intellect could grasp the inevitability of a disaster.
With their leader dead in a gigantic bowl of fire, the orks retreated and left the place to its former silence. 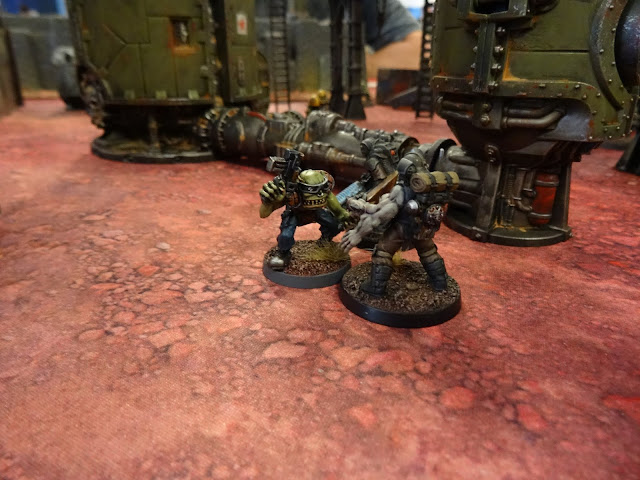 Not long afterwards, some of the hybrids who had just rebelled on Prastok tried to seize the opportunity to earn something to help in their rebellion, weapons, food, gear, anything would help their cause at that point...
The Legion was already prepared for more though. 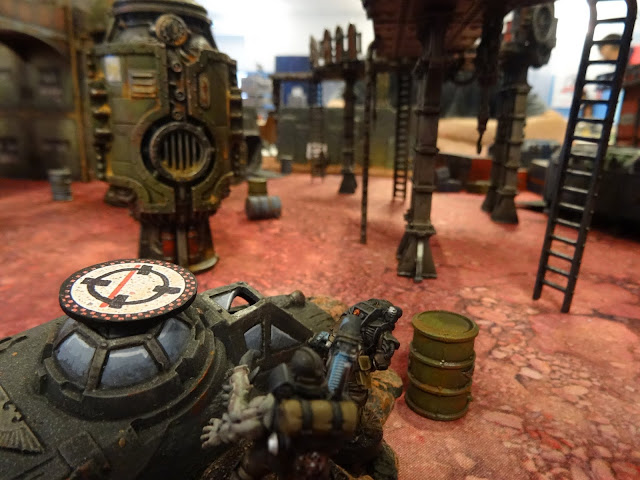 From the experience learnt with the orks, they quickly secured the strategic points.
Without any surprise, the outcome was very similar, the hybrids proving to be far more organised and dedicated to their goal though. 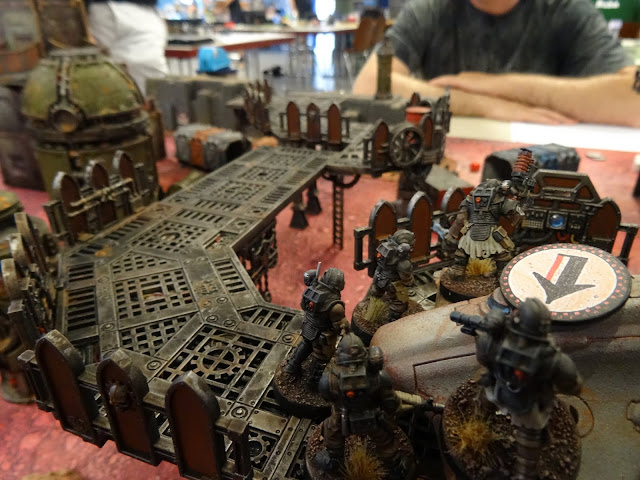 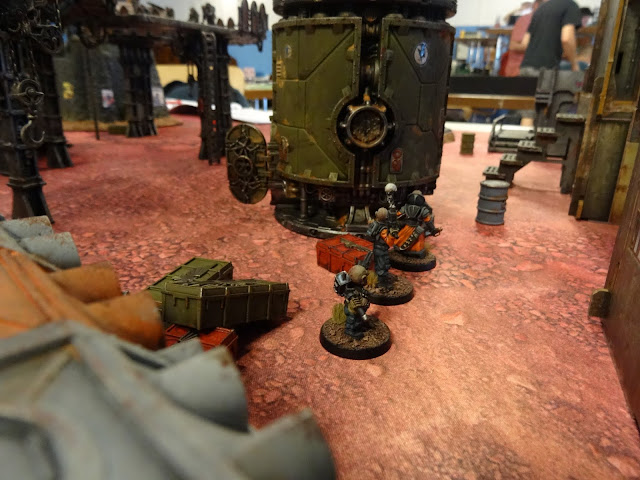 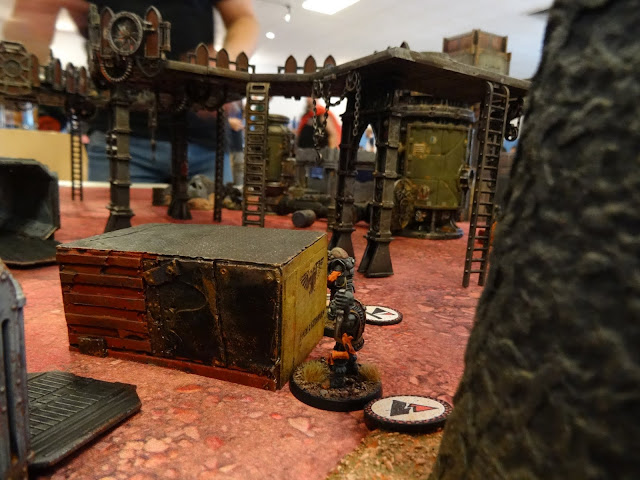 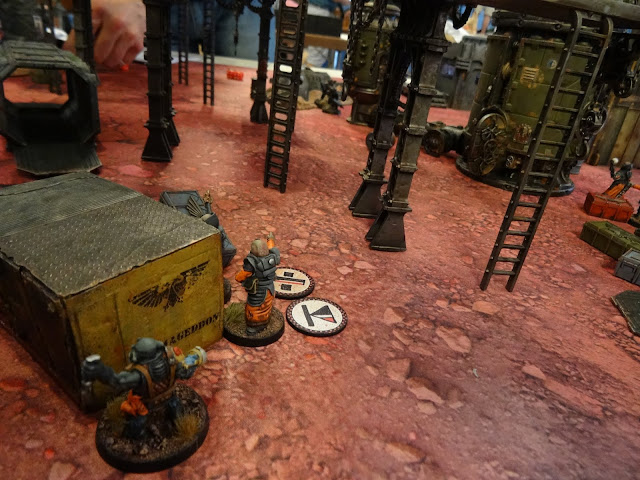 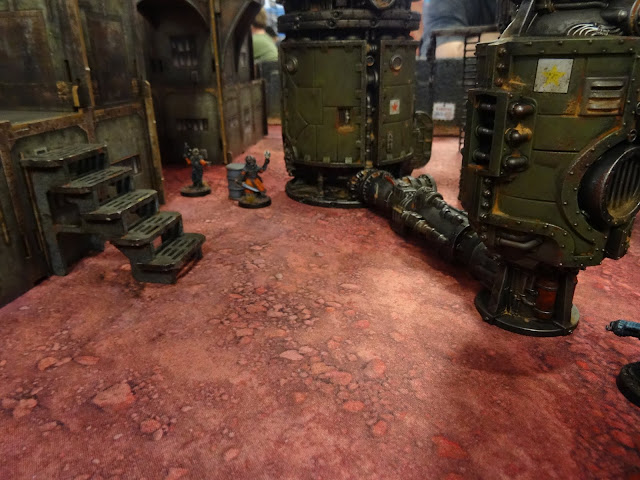 So here we are, 4 games of Shadow wars played over the Week end, some with only 2 players, one with 3 and another with 4. I enjoyed all of them and was glad to get the rules in my hed once and for all. I really need to play to get things, I just don't get rules otherwise.

This was also the perfect opportunity to play with some very nice guys I like and to play with models which had never seen a tabletop yet so that's multiple wins at once as far as I'm concerned.

It's definitely got me even more excited about all this than ever !

Of coure, this is not all we've played over the Week end so expect another battle report for the Oldhammer side of the WE !