Imperial Guard Commissar - Save your models !

Yo may remember the late mutant I painted some time ago...

This model was offered by Colin from the Leadpile and I had great time painting something fresh. I decided to launch an operation to get all those models we convert but never truly finish, done once for all.
The idea is simple : you just drop pictures of models you started but will unlikely finish and someone picks one or more to finish them. Everybody wins, those who post pics can pick some models and the time they've spent has ot been pointless since the model got finished in the end. It's also a great opportunity to work on something different thought and prepared by someone else and that's what I like most about it.

This is the model I picked in the lot from Theresponsibleone : 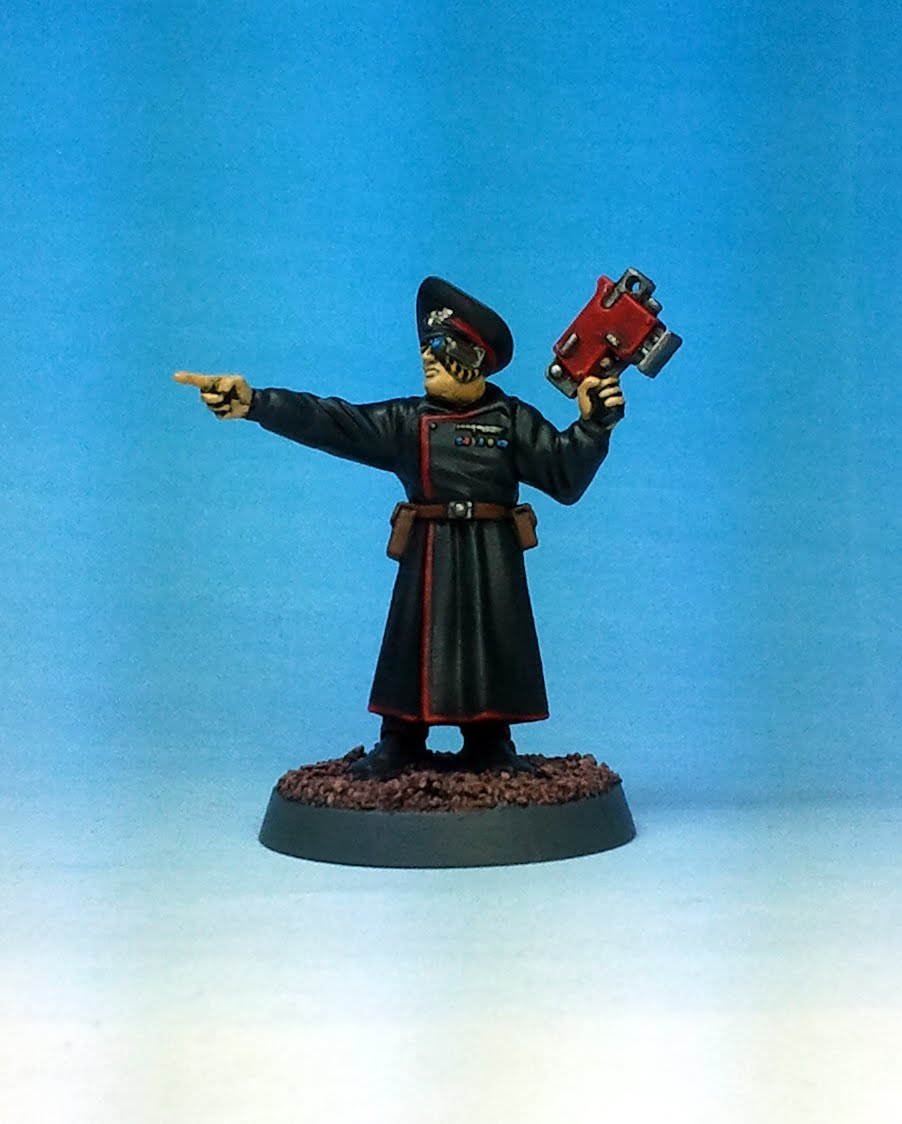 What I picked was this : 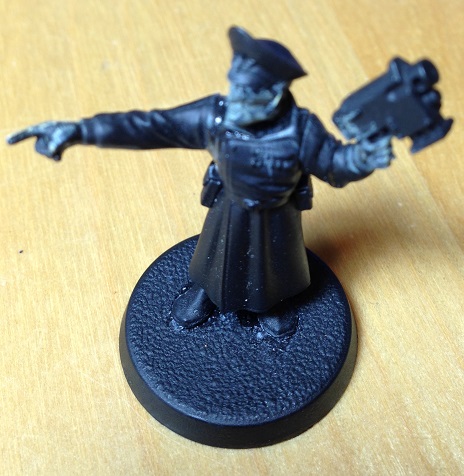 A solid kitbash, well prepared (though I had to remove some mouldlines and drill the gun barrel) with a very neatly applied basecoat. It took me something like 2 or 3 hours to get this one done and it was a pleasure, time well spent really !

Painting wise I opted for something really simple as I think commissars don't need to be covered in bling to do their job. Though its is a plastic model I think it' smore in line with the Rogue trader range than any modern model. It's simple an dthough the gun is a tad on the large side, I think it works wonders.

If any of you feel like giving a second life to some of your models or are willing to finish what others couldn't, head for the Oldhammer Salvation Army page : HERE

Marauder Venator - Test and first on the line 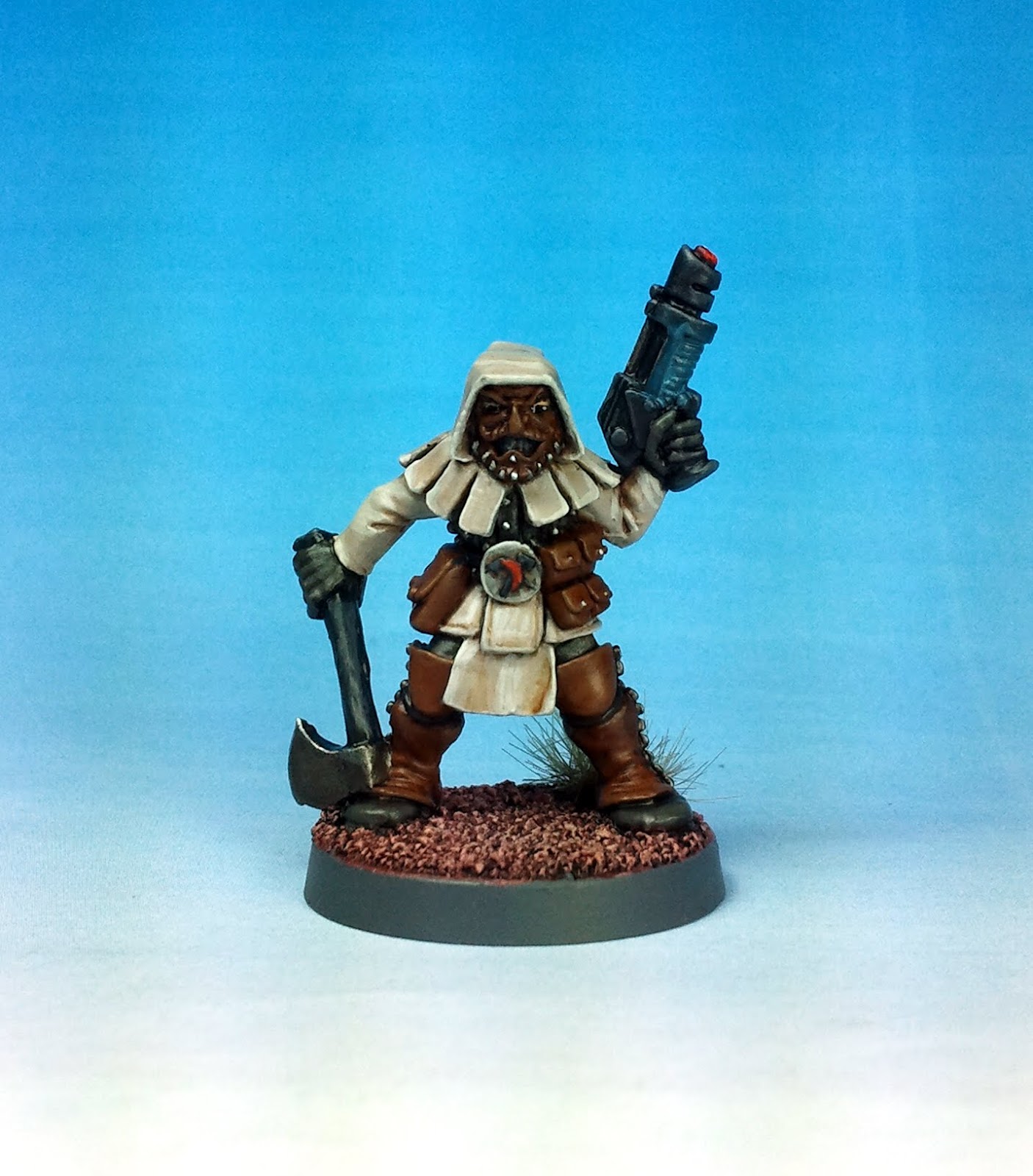 Venators... Funny how these guys have been playing with me since 1996 when I first discovered them in the White Dwarves where the confrontation rules had been published. I had just bought this lot of old magazines in a hobby shop and when I came home my mind was blown into atoms.

Venators and confrontation aren't familiar?, Have a read at THAT first then ...

Rogue trader Squats - The return of the Heavy Industrialist Union

After their summer adventures in the foreign lands, the ranger squad of the Heavy Industrialist Union have finally got the last bits of paint and have even gained a friend in the process.

If you want to read their summer adventures, here they are :

I hope you'll excuse me the poor photos but I haven't bought another camera and have to take my pics with my wife's phone for now (Christmas should hopefully solve that matter...) 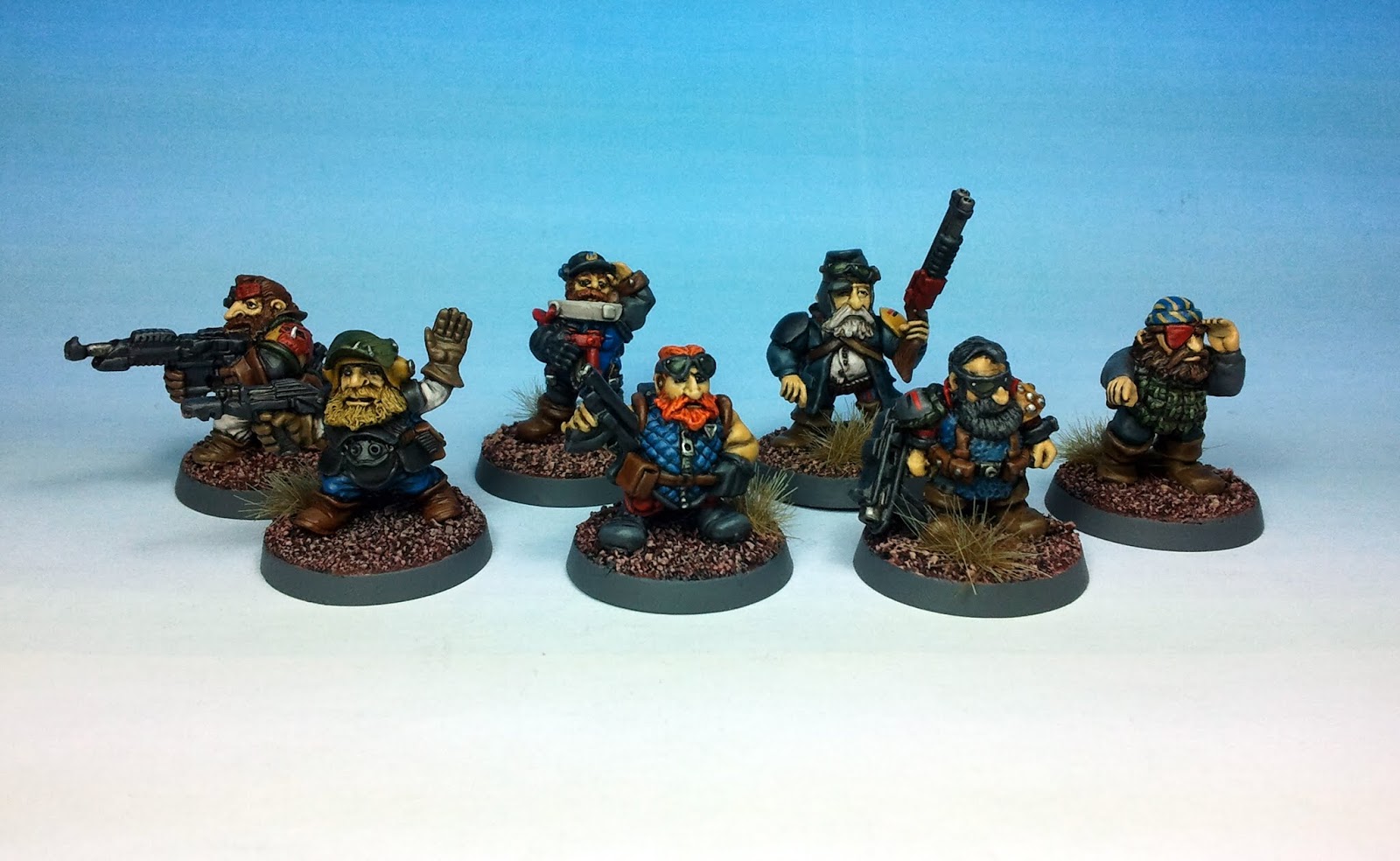 Although it took me almost 3 months to complete this little war band, I had real fun with them. The aim behind building this gang was to have a team of scouts or rangers, the sort of squats you send on remote locations to explore hence the limited militaristic look of them and the fact that 2 of them don't even have weapons.
Read Moar Skullz »
Publié par Asslessman 14 comments:

I need a drunk - How to turn Willy Pewken Rogue trader ?

You know what? this world is far from perfect, and I'm trying to make it better any time I can. Today I 've realised we are in dire need of drunks in Rogue trader, why don't we have any? WHY?

Warhammer has got some :


Well that's enough, by the power vested in me by Green Stuff, here's a drunk hobbo for Rogue trader : You can recognise Willy Pewken form the picture above. His face, his pose and the way he seems about to fall added to that bottle hidden in a bag leave no doubt about his state : he's totally Boracho.

For those of you sensitive about altered old models, let me just say that the model was not damaged in any way and I only added some putty here and there, a good acetone bath could make it good as new if needed !

How to make a fantasy model look futuristic ?

- Add a digital walkman but beware to leave one with a wire, otherwise it will look like one of those stupid bluetooth kits. No you want the real deal, the one with a cassette player and an ear plug at the end of a wire !


For now I'm looking for critics and comments, do you think it does teh job, I'm balanced about changing the head set and adding another speaker on the other ear to have a real retro 80's look...

A lot will be achieved with painting (I plan on using the sleeveless shirt to perform so silly freehand but have no idea of what so far (ideas welcome too).

EDIT  :Just to make things a litle clearer, her'sz what the model looks like BEFORE : 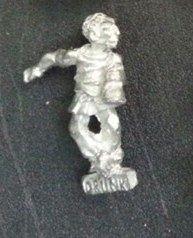 After enjoying one of those week ends where some shitbags decide to break into your house to rob you of all your technological possessions with the photos of the kids and music they contain I somehow felt like changing my mind with something relaxing. I have a squat warband on the line but felt like taking a break.
Good thing is humanity is not entirely made of human waste. There are actually some people who just give you stuff instead of robbing it...

A while back, my pal Colin Murray of the Leadpile had a mutie feeling lonely... He took the decision of letting it go to clearer shores so that he might gain some attention. 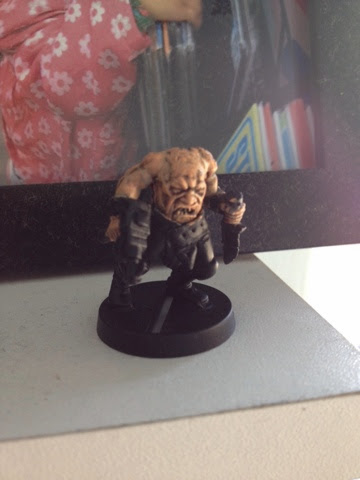 Well, while I have tons of unattended models myself, I just couldn't resist the look of that one. He's definitely the kind of kitbashes I'm not able to come up with and he would make a perfect mutant for my Rogue trader Setting.

For some reason, some postman (we will never know on wich side of the channel) decided to use the package to play rugby or something but not only did the model take a month to make its way from UK to France, it arrived in the state you're seeing below... 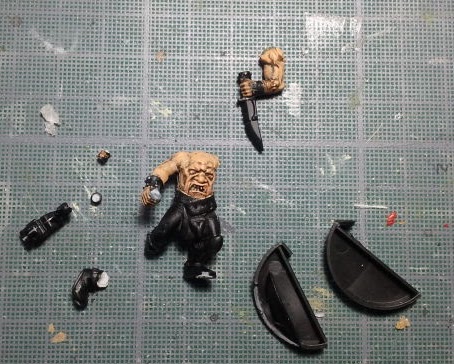 Nothing like the view of a defenseless model smashed to bit by some indelicate post officer to help you gain back your faith in humanity.

Well, good thing is, seeing a gift in this state left me little choice but to fix the mess because it just didn't feel right. So a couple (or two) of hours of modelling and painting after that, here's what the mutie looked like :

The mutant you see is called "Big tooth Ed", he is natural mutant born in the underhive, he's a nice guy with a bad temper but yuo have to know he's been mocked by everyone because of his rather particular physique. His left lower canin is indeed far bigger than it should and this gives him a peculiar face. The cruelty of men knows no limit and time earned him his nickname "big tooth"... 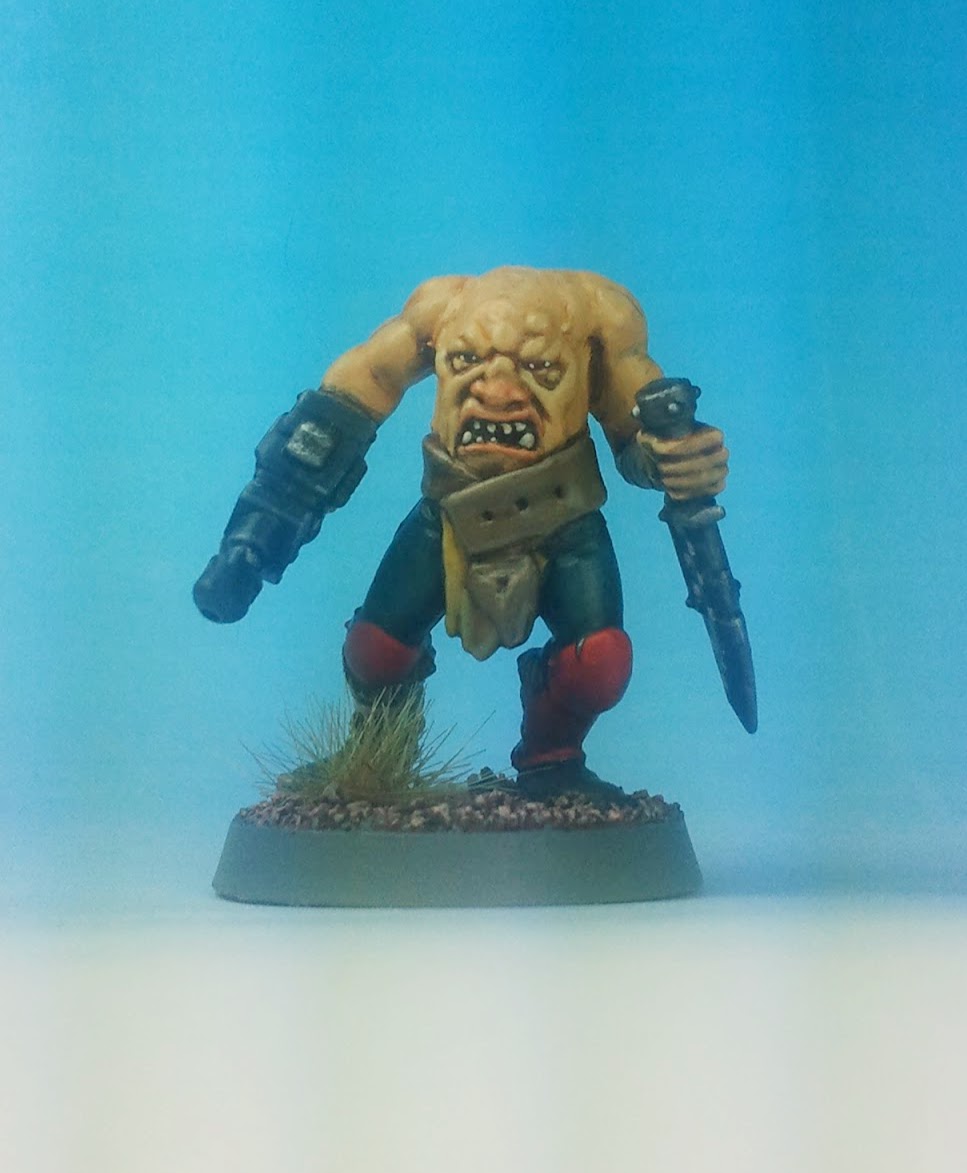 I hope you will excuse the rather poor quality of the photos but I had nothing left but my wife's phone to take pictures right now...

Well, now I've completed this one, I'd really like this idea to evolve a bit. I mean we ALL have unfinished models, part done conversions or models we converted but which never saw any paint... I think it could be really cool to exchange those with people enthusiast enough to finish the job. What better way to share the mojo around ? Anyone who has those kind of unloved models lying around, take a pic and ask to the community ! I'll be looking for some to share and look forward to painting some done by others !

If you're looking for a place to exchange thjose unloved models, here's the place, the Oldhammer Salvation Army  has its arms wide open !