...and sidekick with panache ! 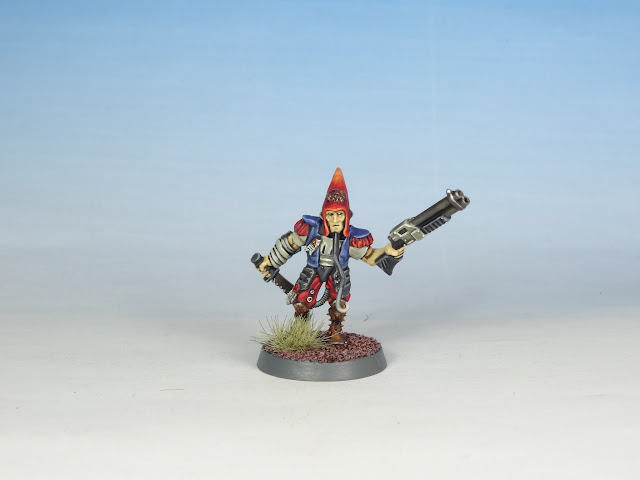 I absolutely hate deadlines, with a passion really. But it seems they do get the best of me and force me to pull the fingers out (of whatever you might think worth pulling out from).
With Knavecon nearing I had a model left to paint and very little time to do so, since I'm on holidays with the kids right now. You will read more about the game involved but I needed a sidekick for the Rogue Trader I showed the other day.
Read Moar Skullz »
Publié par Asslessman 16 comments: 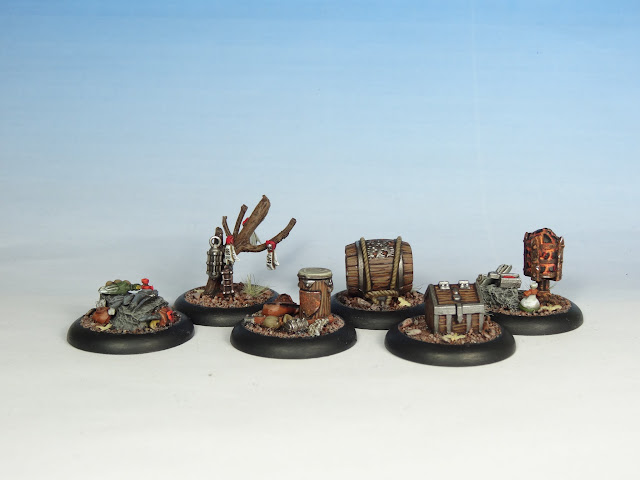 Since I'm about to go to Ireland to meet some of my WIPster buddies at Knavecon, I'd better get all my gaming accessories ready !
Since a good part of our reunion will revolve around Frostgrave I had to make some tokens. Good thing since tokens are usually handy on many games so I'm pretty sure I'll find a use for them outside Frostgrave.
Since these are just tokens and not "proper" models (I'm sure some will cringe reading this) I didn't really feel like spending too much time, energy nor money on them.

A quick look into my bits box informed me I'd have hard times making 6 treasure tokens...
Thing is, I actually found many interesting bits instead. That's how an evil plan formed in my evil mind.
What things do warbands need ? Gold sure, that's the easy one, but they also need to eat like any other guy, they need weapons and equipment, magic ingredients and all sort of stuff which they'd need to buy with the gold they find.
So why not make those things they need directly as tokens ?
Read Moar Skullz »
Publié par Asslessman 22 comments: 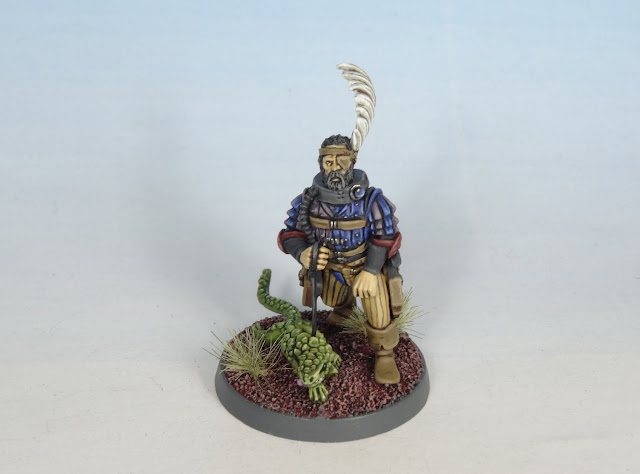 This is a bit of an unusual model today. Not that the style, inspiration or genre are particularly original for me but it's just that I'm not used to base my whole work on a single illustration like I did here.
But why did I do that ? That's a fair question to ask.
Once again, it's because I was tempted by another of my WIPster colleagues namely Axiom. You might remember the excellent eldar pirate he built, based on an illustration from the Rogue Trader Rulebook. Well as soon as he had published it many of us decided to do exactly the same and that's how I ended up with the project of creating a Rogue Trader from scratch.

An odd couple - Ogrynn and Goeblynkynn from the realm of Zhu

First of all here's an album that inspires me and helped me get into the right mood for those who fancy some good old inspirationnal music.

Now you might remember that some (long) time ago, I had the pleasure to change this blog's head banner from a Blanche rip-off for an unique artwork from Zhu Bajiee. Now I intended to repay him in some way from the start and the only real thing I can do is paint models really (don't think anyone from the hobby would be much interested in Kendo lessons or foundation designs...). So I offered to lend my painting skills in exchange.
To my surprise I received two very different models (at first), one big and old, the other small and new. A close look at the models first indicated that both were marvellous sculpts (no surprise given the sculptors really) but that they actually matched each other very well and that bonding one to another would be a very nice exercise.

Along with the models and some visual references, I got a hand-written letter giving a bit of background for both characters to pick hints and clues about how those 2 should look like.
I have to say I absolutely loved this way of doing things, challenging one's imagination rather than being bluntly direct about colour schemes and all.

"Aeldwurth the Belch and Skungevinger Runtbottom are accustomed to a life of pig-sticking, mug-raking, mushroom thievery and occasional bouts of low-level thuggary. It's on account of this that they have been selected in the King's militia and honorable body of able bodied men, holbyts, dverger, gobblynkynn, urucks and of course ogrynns..." (Source from Zhu Bajiee) 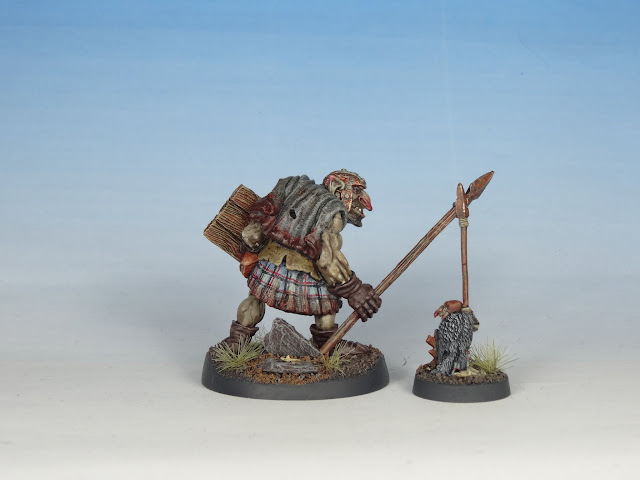 That meant taking risks though as what I did was an interpretation mostly. I tried my best to get into the right mood which led me to very different choices and way to do things compared to my usual work. I surely learnt a lot in the process and I sincerely hope I managed to capture a bit of what Zhu had in mind.
I've tried to stick to a soft earthly palette and though I switched the greens you could expect for a light blue tartan to add some more vibrance I think the spirit is here. I painted the base rims in a dark grey rather than black to avoid any disturbance.
The cape was weathered with pigments (which have unfortunately lost some of their quality after varnishing).

The ogre is an ogre hero from the Fantasy Warlord range and was sculpted by no other than Bob Olley (you could spot his style from miles away).
I'm a great fan of a lot of Bob's work but I have to say this is one of his best work here, just the right ratio of insane details with still fun for painters (without having to guess what's what). Despite a very annoying casting issue (which I stupidly didn't fix correctly) it was a blast from beginning to end.
If you want to read Zhu about those and see where to get those (still produced by SHQ miniatures) head to THIS POST.

Here are a couple of illustrations that inspired me :

The goblin is a goblin spearman from Redbox Games, and sculpted by the very talented Tre Manor. I don't think I've ever painted such a fine model at that scale. Definitely the first time I paint eyes on such a tiny one for sure !
Despite its size, it's absolutely brilliant and I will definitely check other models from Redbox if they're all as pleasant as this one.

Here are the main inspirations for the goblin :


Just for fun , here are a couple of WIP shots to show how the model looked before any weathering : 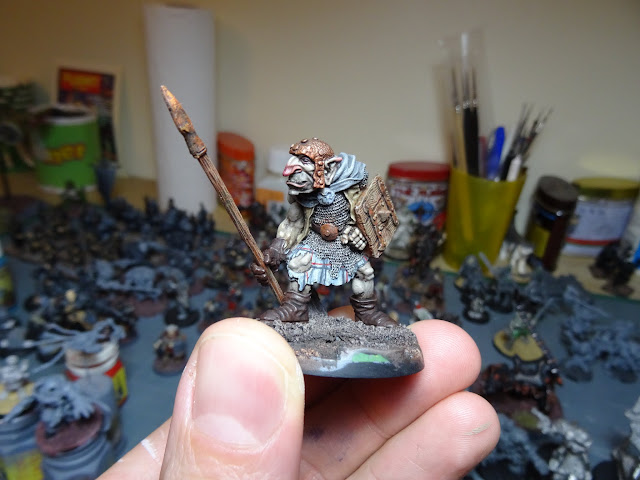 I also had a go at playing with artificial water to add the feeling they dwell in the middle of nature. So I built this casing around the base with adhesive tape (there must be better solutions really) : 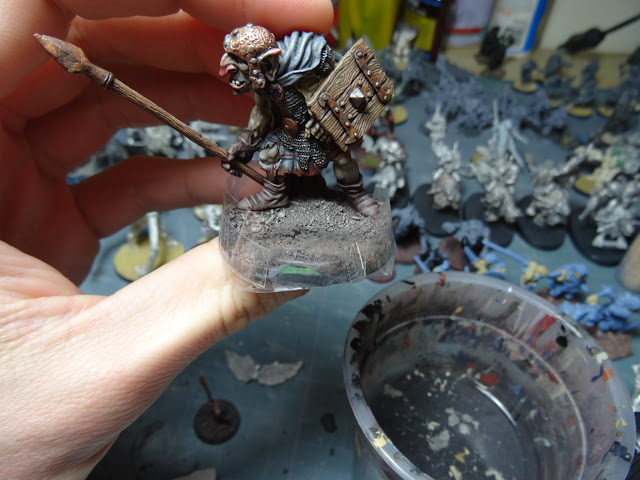 I used brown and blue inks to give a nice taint to the artificial water and build the effect layer by layer (about 4 IIRC) with each layer a bit more translucent than the previous one : 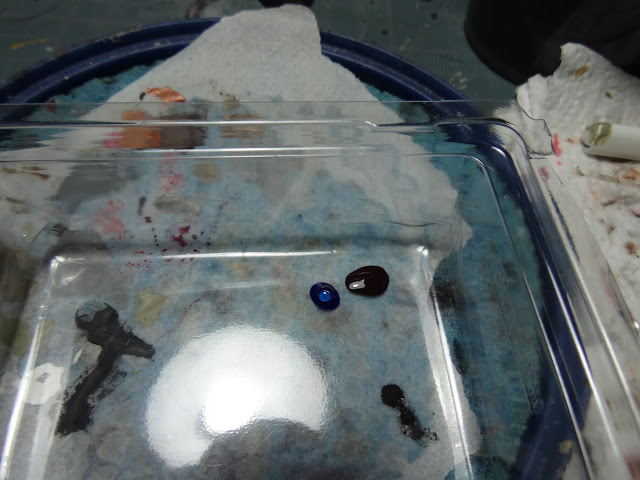 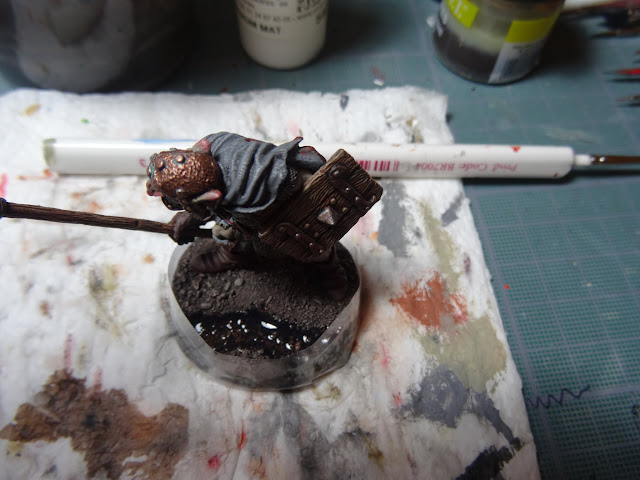 The rest of the model just consisted in finishing the base with grass tufts, birch seeds as leaves and some ground tea to represent humus. The guidelines indicated twigs would be a nice addition but I never managed to find the right size or disposition for them. The base seemed too busy and messy, catching the eye from where the real things happen. I considered doing a display base too but this would have been a project in itself and I didn't mean to delay the painting any longer. I will have a go at that sort of thing in a while though, I have the perfect model for it ! ;)

I've taken a little picture with some other models just to put them into context but I realise I cruelly lack good scenery now : 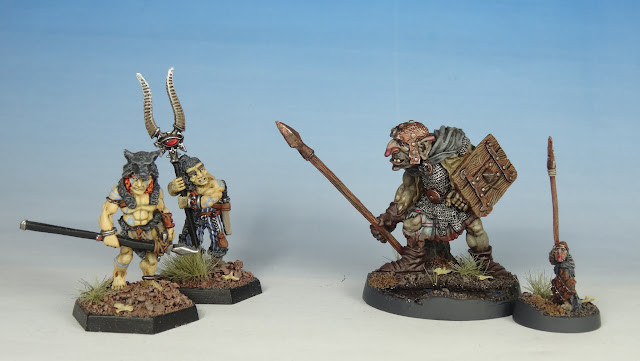 For more collaborative work, check Airbornegrove's blog Give'em Lead ! and the excellent banner he also got done by Zhu :

So that's it for now, I've spent a little more time than I usually do on these but I've had plenty of fun and pleasure doing so ! 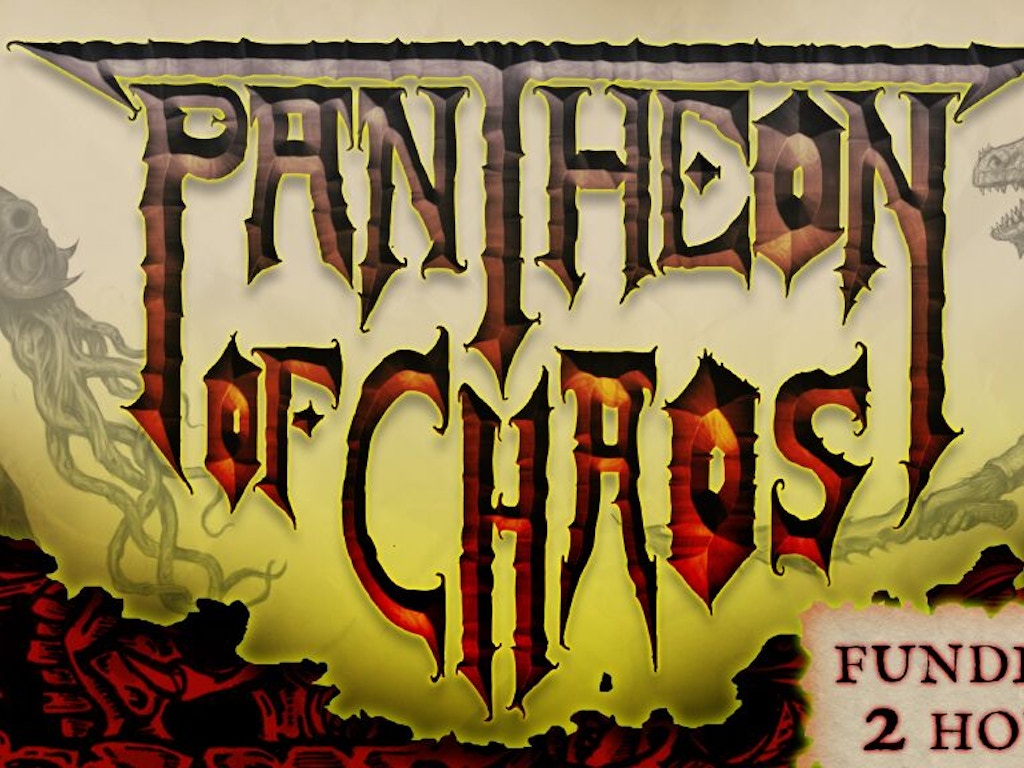 Every now and then comes a project that leaves my panties wet, today's in one of those : PANTHEON OF CHAOS. 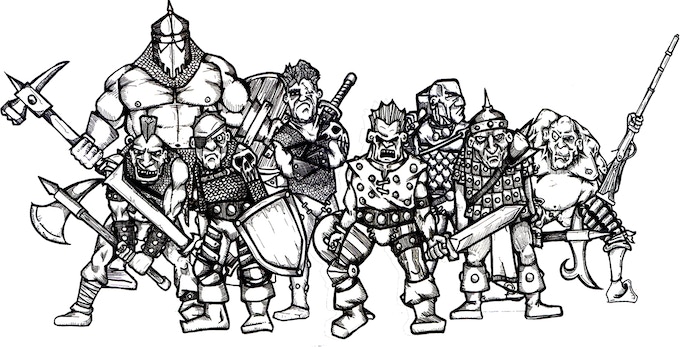 I've managed to grab an early bird pledge that should give me a lot of opportunities since chaos has always been my favorite faction of the GW lore.

There's a feeling inside... - Martial artists in the 40k universe. 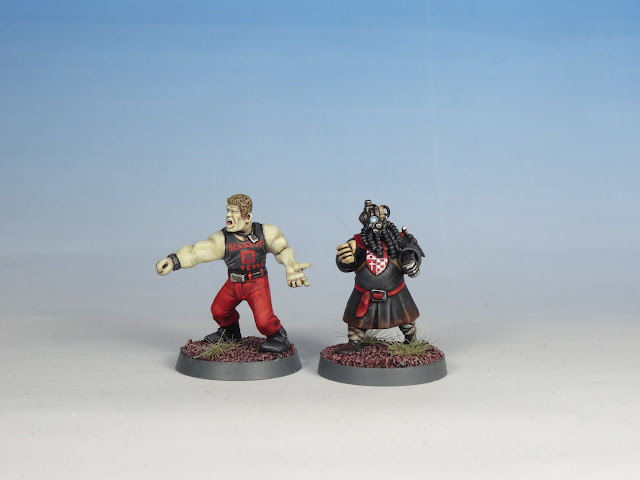 You know what ? Lately I've felt the urge to have models of Martial artists for my 40k games... Why is that ? Well that's one long and sordid story really... I'll tell more about it on the Scale Creep though as it involves some of my WIPster colleagues...
Read Moar Skullz »
Publié par Asslessman 14 comments: