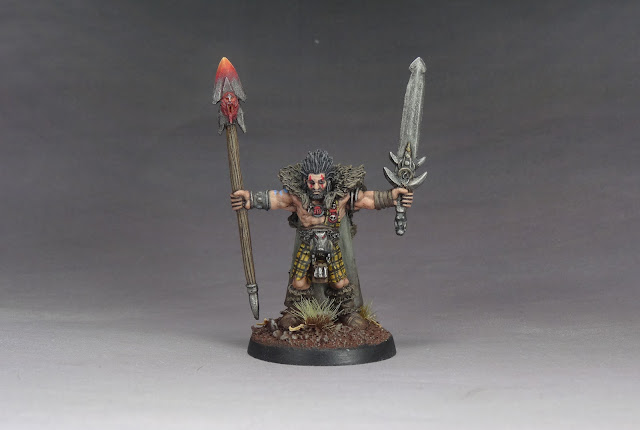 Today's entry is a litle breal from painting 22 models at a time ! I was recently on holidays in Ireland and had the opportunity to meet some dear friends of mine, I'm not going to tell you about how wonderful the country was but one unexpected bonus was coming back with a model of Sláine, eponymous hero of one of the comics from my youth (I even had a pair of yellow tartan cargo shorts).

Anyway, the most important point here is that when given such a lovely model, you just honour the gesture and this was the perfect break from large scale projects lately, it really felt like a break while still boosting my mojo. The model itself is now OOP and was previously released by Wargames Foundry, I really wish more of them in that style would have been released since that one was nice.

If you're familiar with the setting, you will have recognised Sláine as bearing two of the treasures that make him the King of the Celts, as beautifully illustrated by Simon Bisley in one of his greatest works : 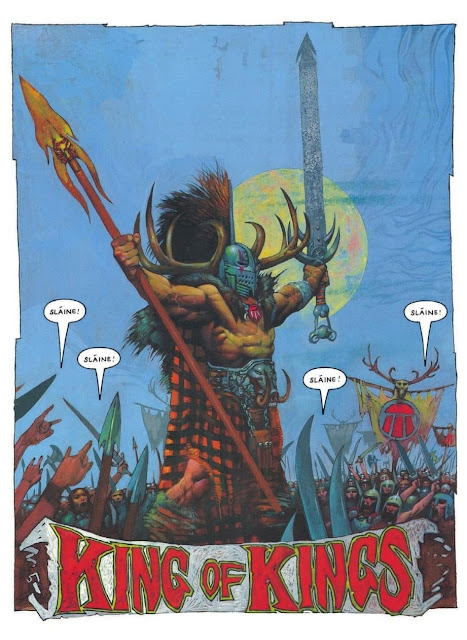 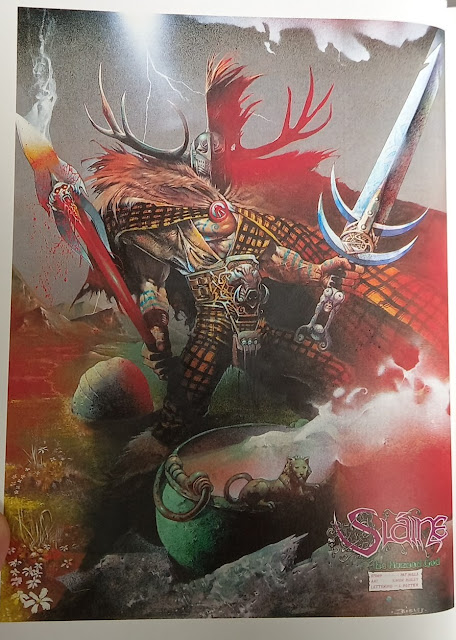 Now of course the model is a rendition of a specific moment (and looks like it's from the rehearsal of that scene when he doesn't wear his horned god helmet or Sessair tartan cape) so I might want a Vanilla Sláine with Brain biter (his trusted axe) at some point. I tried to be faithfull to the illustration without being a copy, the cloak would have been too confusing in yellow so I swapped for a regular one.
I do regret not more carefully preparing the model though despite the time spent, I thing the sword could have used a fair amount of sanding to look smoother like it's supposed to be, I already spent a lot of time filing and sanding the weapons into shape (the spear looked like a shovel at first).
I have to say I'm quite happy with how the burning hot end of the spear turned out though. 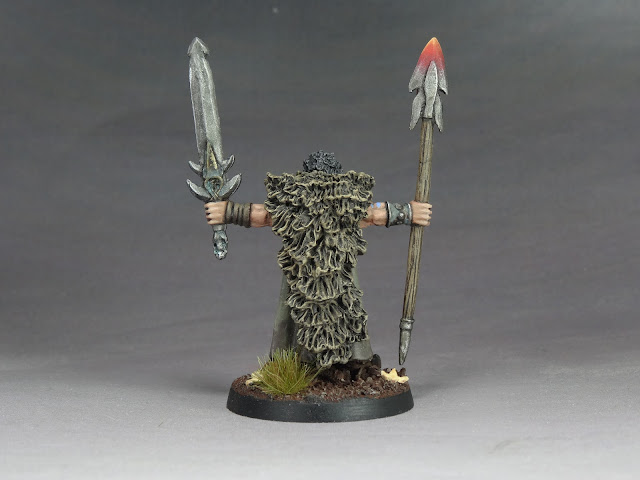 I don't have many formorians or el-deamons for our hero to face at the moment but this has surely fired the will to fix that in my heart ! 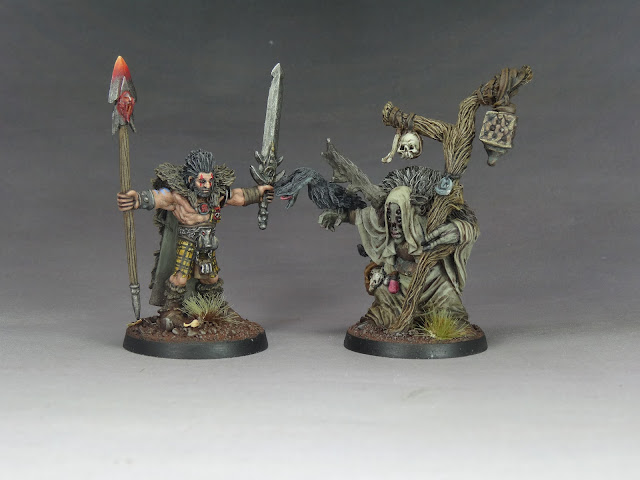 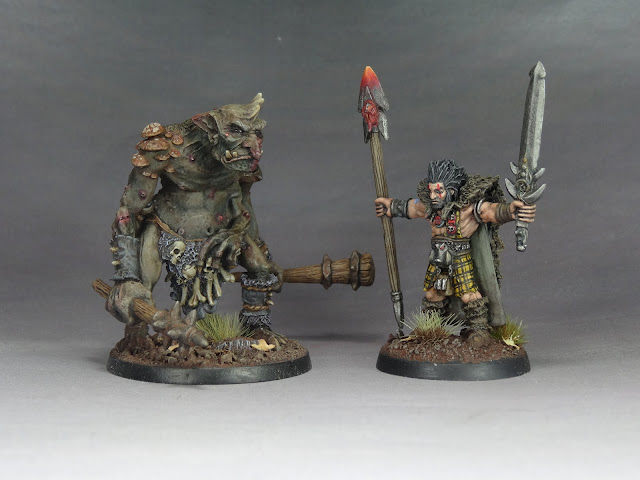 Now on top of getting a nice model, I more importantly got to play the recent game from Warlord with my friends and got to play as Sláine !

The first scenario is a sort of tutorial to train and get the basics where Sláine and Ukko are tasked with stealing loot and leaving from a table edge. 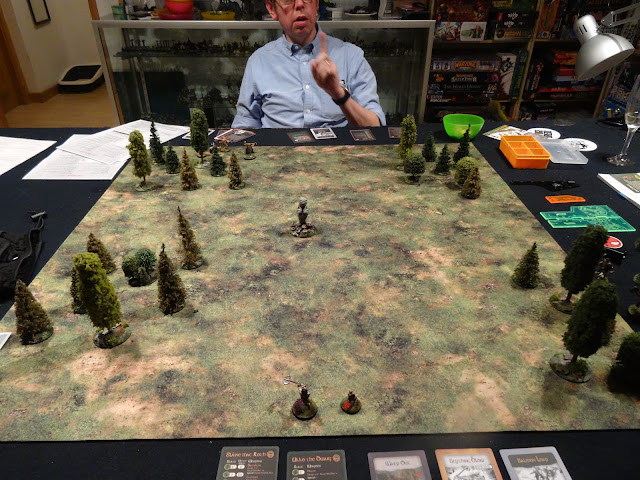 Sláine is an absolute monster and his will power ensures you can activate him several times, which I did, thus getting to the loot before anyone else ! 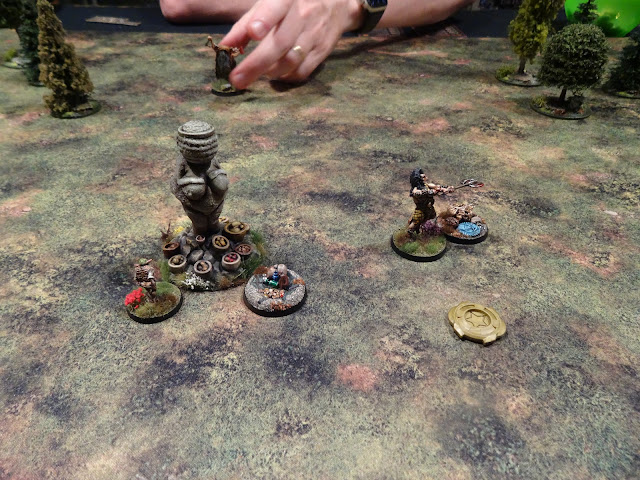 As the table edge was nearing though, I felt it wouldn't feel satisfactory if I just fled so dropped the loot at the edge just before the goal and went back for some action ! 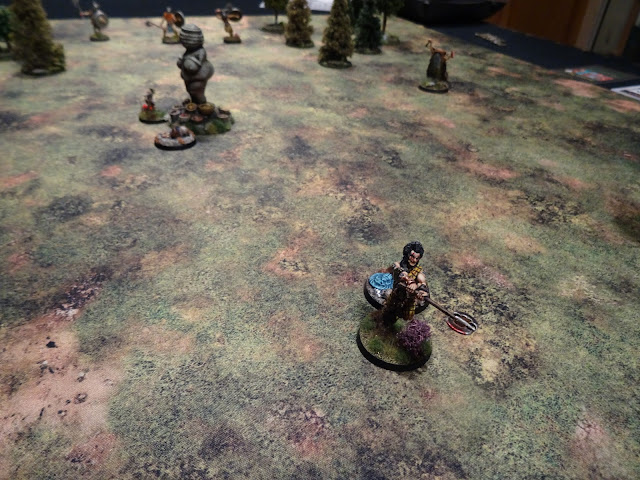 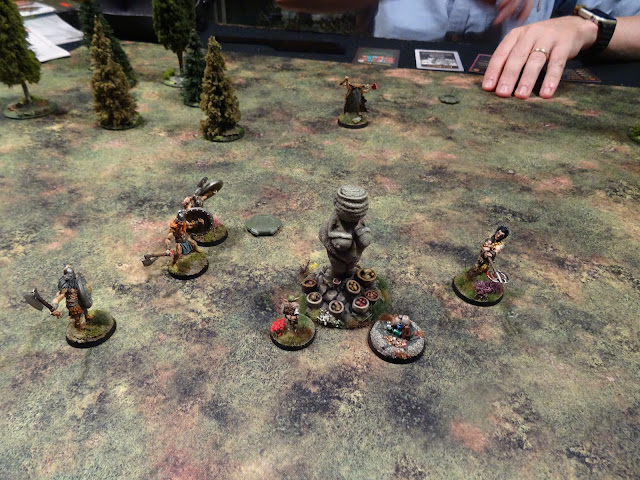 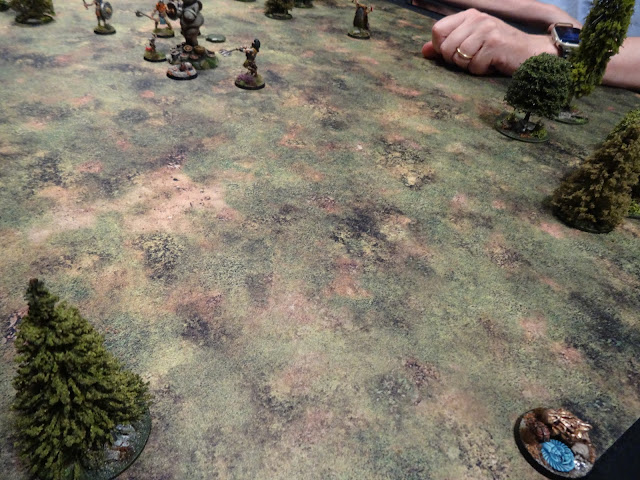 Maybe it's the haircut but Sláine is the best at what he's doing, you can expect him to mowe down ranks of warriors ! 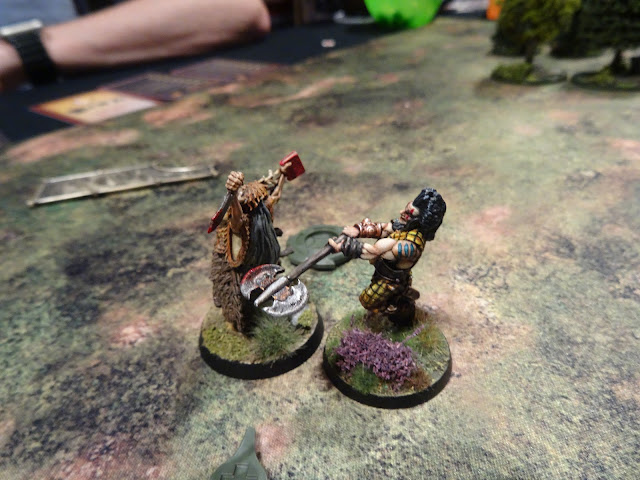 The first scenario wasn't difficult and I reckon designed to be won by Sláine and Ukko pretty easily. 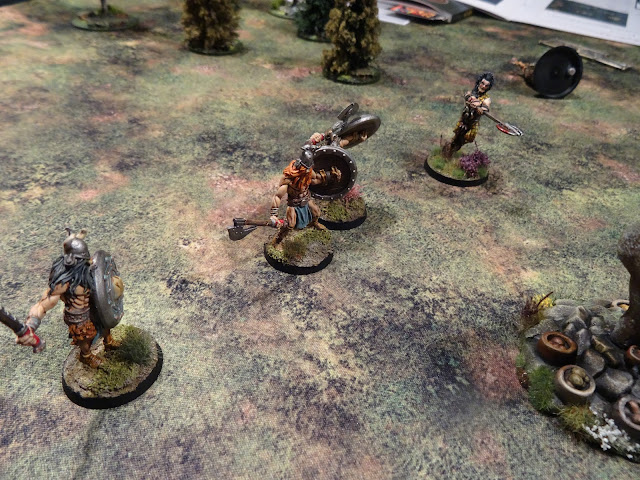 Now the second scenario had Sláine and Ukko protecting sacred stones of the goddess from the drune forces trying to desecrate them. Sláine would not let any of them soil her name ! 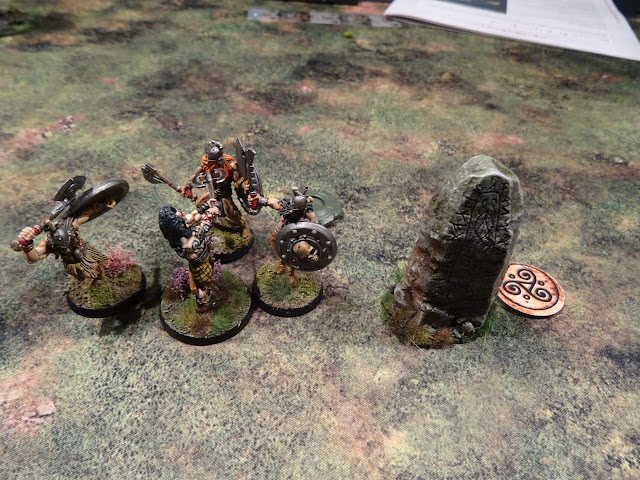 One by one though, the Drunes stuck boogers on the stones, ran fingers dipped in feces along the stone as they were passing by or rubbed their genitalia on the shrine, with our poor heroes unable to stop them !
Once again, I feel like this scenario is kinda meant to go this way, the powers Sláine gets (they change from a scenario to the other) clearly weren't designed to counter the desecration but more to be stuck in combat with many enemies (which happened) 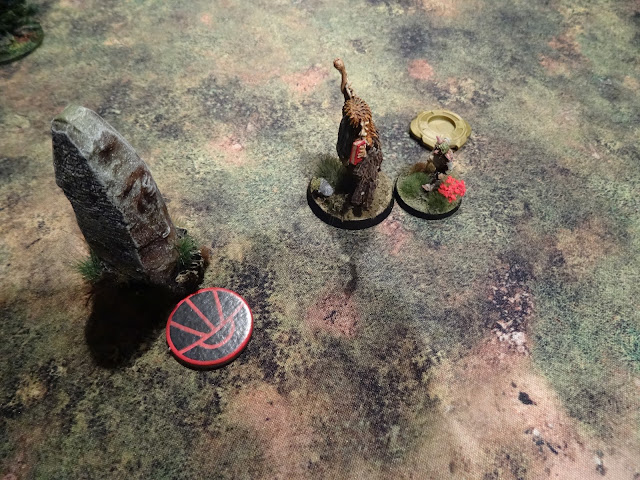 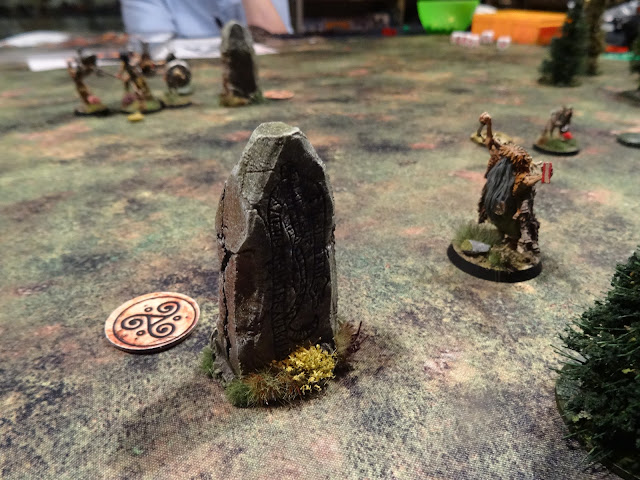 Now the third scenario (it was a long night) had us with Sláine, Nest and Ukko protecting a shrine but with the introduction of blood points on both sides and therefore magic. This scenario was the one when I managed to set Sláine into a war spasm and it just felt like in the books,  Ukko (less then a mediocre fighter) can easily trigger Sláine into a spasm (by automatically failing a will power test against spasm) but all sorts of tricky powers to block ennemies (not to mention insulting ennemies to gain blood points) 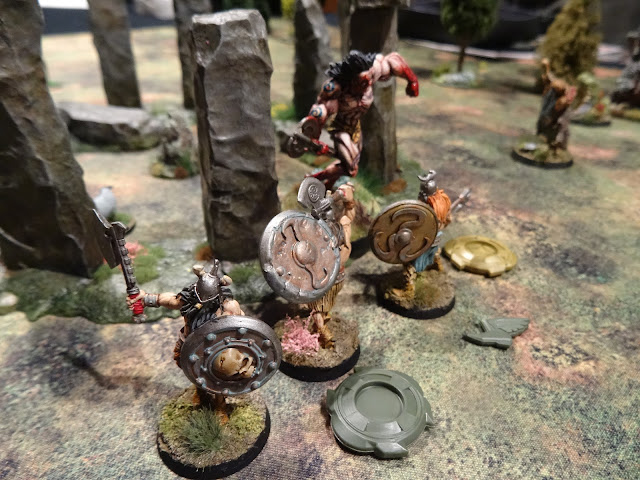 I quite like the balance in combat between overpowered heroes and the power of numbers, it can really all fall to a sucessful or failed will power test to see if you can still rain hell on your foes or just get outnumbered, there's a real tension that helps build the narrative I found. 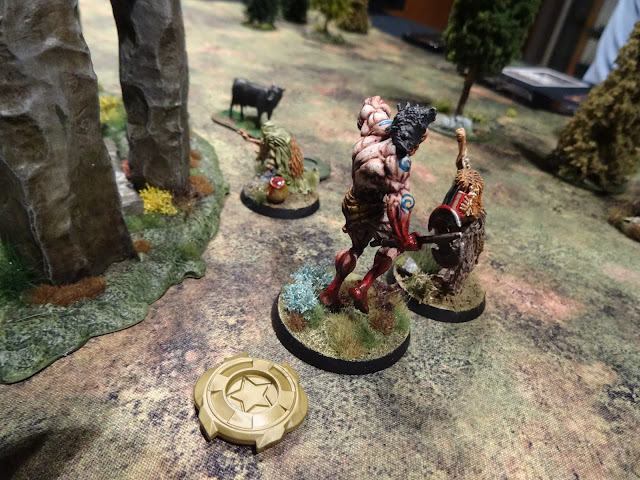 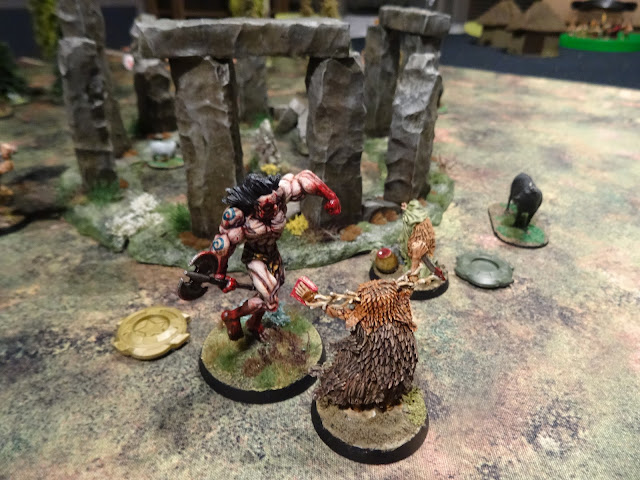 All in all that was a perfect way to end holidays and what more fitting souvenir that coming back from Ireland with stories from Sláine!