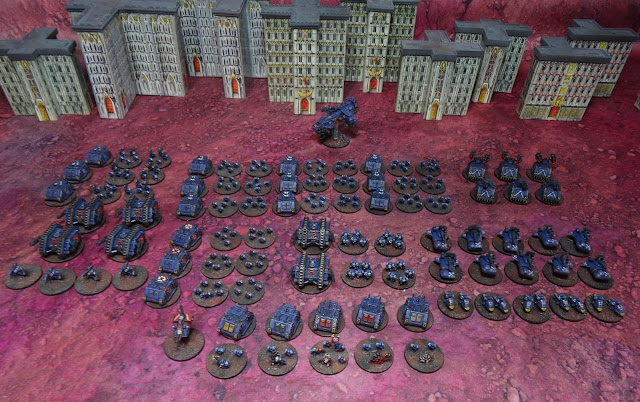 Hey everyone ! So I've been busy clearing the desk from all sorts of half finished projects to get some closure and free space !
Amongst the long term sources of guilt, my epic force (I'm not painting an army, my armies days are over). This started in 2019 and has been sitting on the corner of the table for too long a while ! 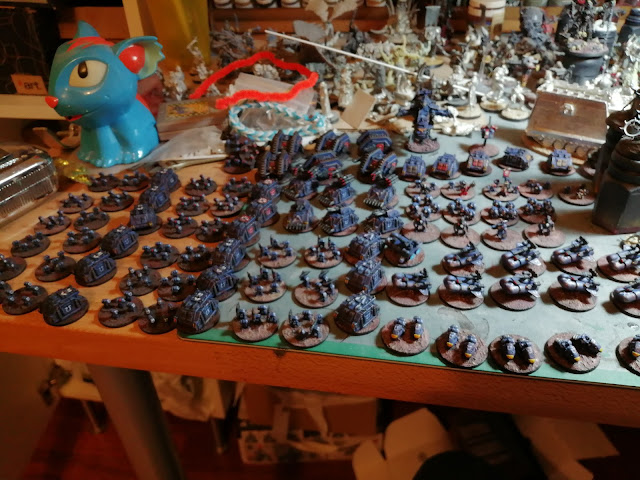 It all started with a lot of motivation and the idea was to make the best of the 2nd edition space marine box (thanks to the generosity of a dear friend) and to give it a more modern take.
The first thing was obviously to get rid of the square bases, I've had a life time's worth of those so I'll skip any occasion for something else.
My plan was to use Renedra bases, they're pretty low profile which I reckon suits epic models better given their height and since most epic infantry models come on an integrated 6mm base, the idea was to simply drill 5 holes with a 6mm drill bit in the base, the aim here was also to give a random pattern to avoid having all bases identical. Since all the marines would be the exact same pose, I thought it was a good thing to add a little variety. 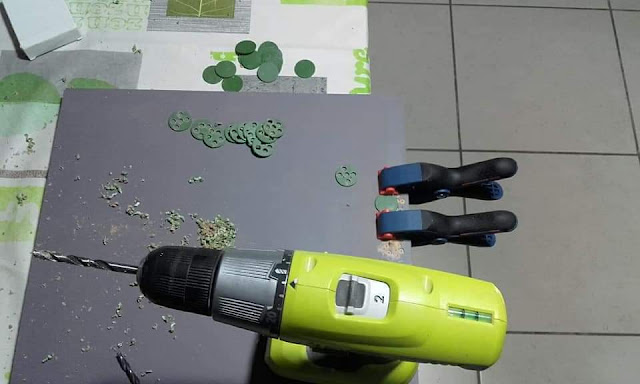 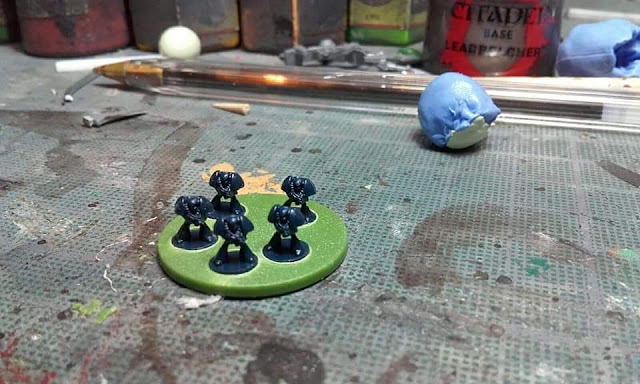 That done I had a small force quickly painted up to base colours, merely a company card and a couple of reinforcements. 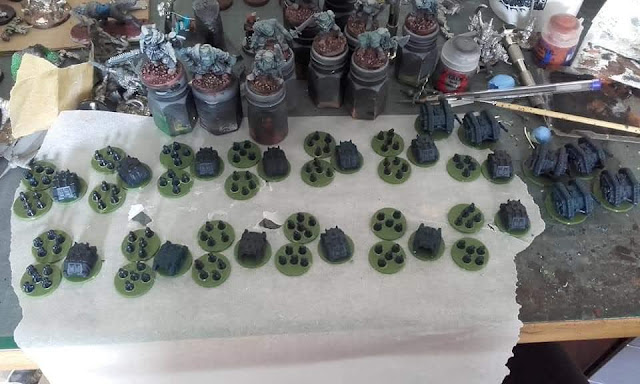 And those even got some play time at BOYL19 although incomplete...
But my friends being what they are, I came back from that wonderful WE with even more models than I had come with : 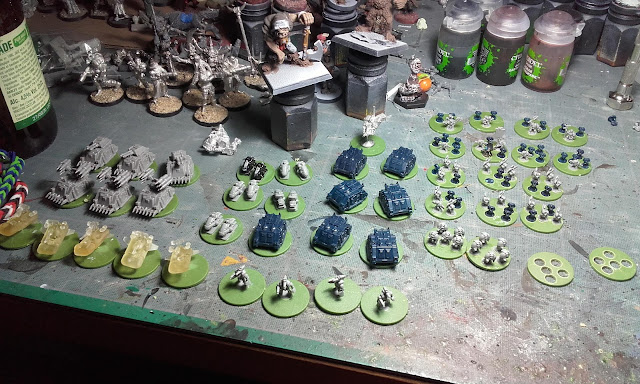 So I took the cards out and tried to design the most efficient plan with the miniatures I had available (not willing to go look for others).
I did cheat to get a Thunderhawk in all honesty ^^' 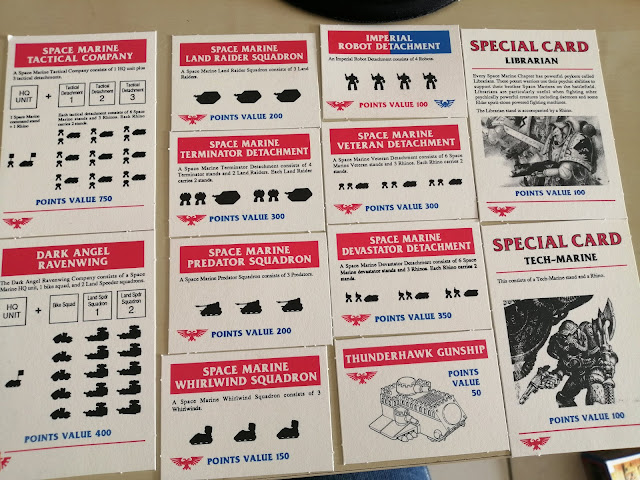 So here you go, let's take a look at the units individually ! Now I'm sorry but epic models seem to be an absolute pain to focus on so some of the photos aren't top notch, there's honestly not much to see though, these are all old scupts with little detailing and I opted for a fairly basic paintjob for the bulk of the force. ANd I wanted every model to have markings which meant A LOT of freehand. A LOT !!!
Remember this force was started in 2019 right before the appearance of contrast paints, so I had to stick with the same basic methods until the end. I would totally do things differently now though and contrats paints would definitely be the main base for this job.
Now these were done last but they're the ones givig the identity to the force, I wanted one of every character (or at least as many as possible). In gaming terms, I'll either use them as regular HQ for my 2 companies or as dedicated special character cards depending on what I want.

Now the tactical company is probably the least intersting one since there are only 3 different models in it, the rhino, the captain and the basic marine. I reckon it gives that sens of mass though and at tabletop distance I think the varied dispositions add just the right diversity (or maybe I'm trying to convince myself here). 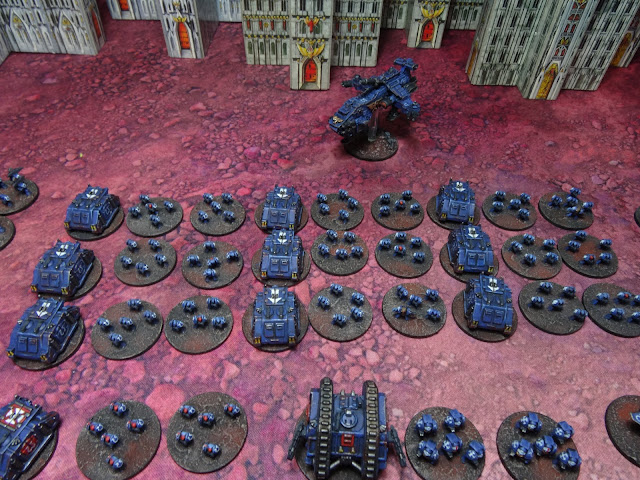 You can also enjoy the Thunderhawk in the back. Now I know there's a clear break of date cred here. I just couldn't use the old flying brick, I ... just couldn't. And the second ed TH is not exactly easy to come up by so I settled for this one which is pleasingly heavy and looks exactly like the gigantic iconic lead TH ! 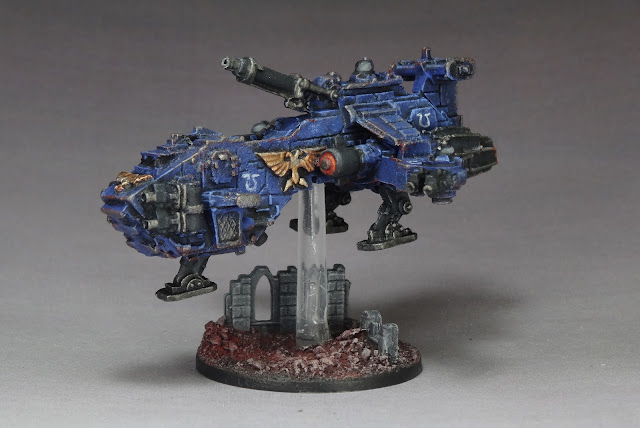 Now even better, how do you tell veteran from regular marines when they'll use the exact same models ! Well my answer was to add a colour to the mix and I think it works well enough to tell them apart. 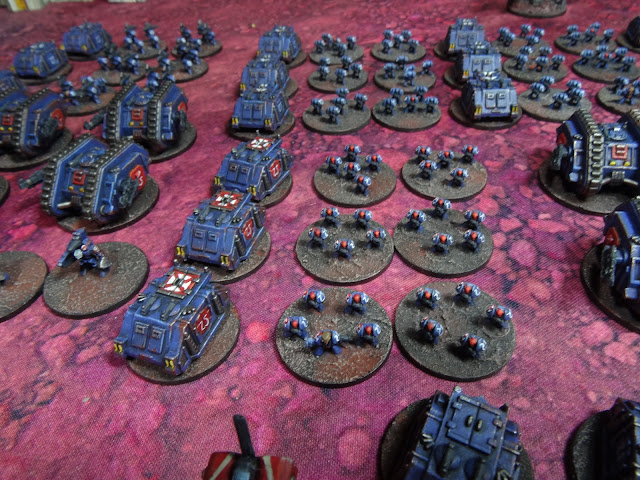 The devastators have the same problem but at least they have an alternative model with missile launcher which helps a lot : 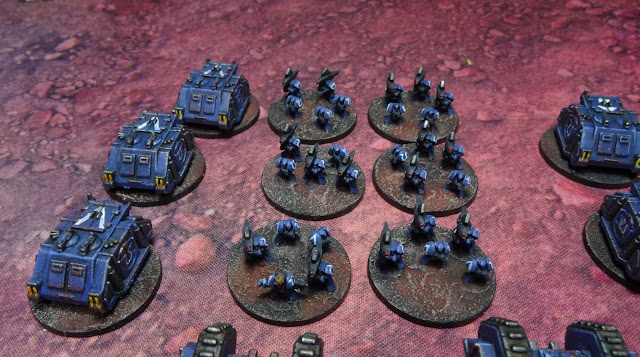 Now land raiders are cool, no questio, so I kinda had to have them. I initially built 6 to have é cards of them until I realised I'll need some for the terminators leaving me with one too much or missing another 2... Who knows, maybe I can fix that later ? 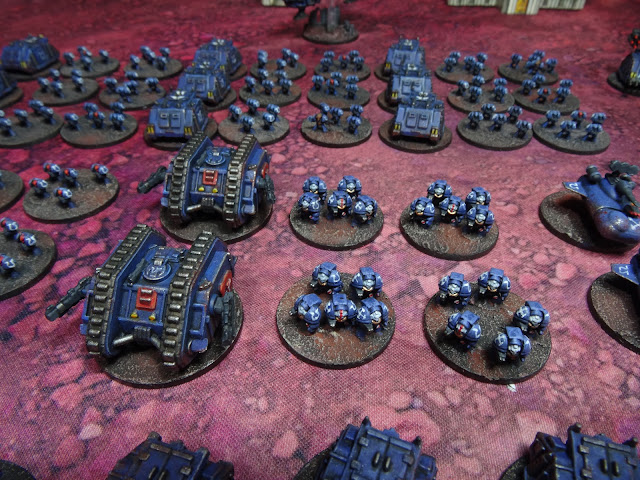 Oh and since we're talking aout the terminators, here you have them along the colossus robots ! 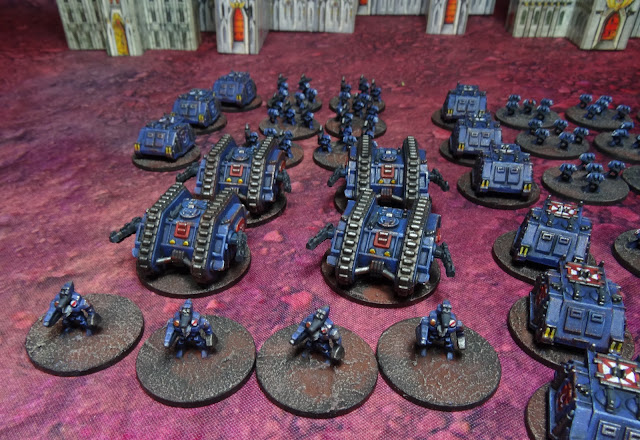 I didn't have predator models but I did have a few whirlwind models and spare turrets for the Epic40k land raider, a little conversion and I think despite missing the side turrets these say predator clearly enough (clearly enough for me at least).
The whirlwinds are just the regular thing and they looks cool although I've seen some with only one missile pod and thought it looked cool. 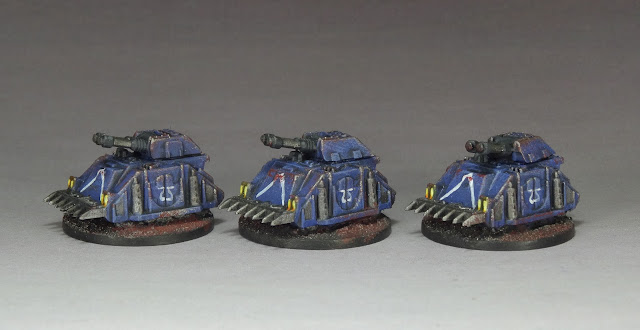 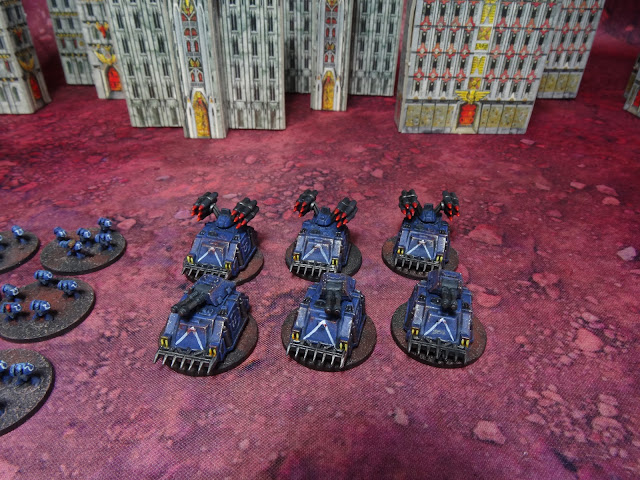 Now the Ravenwing company... as you'll have noticed, these aren't Dark Angels... well I reckon it's just fine to count them as, I didn't want several colours, I've always been about strong colour coherence and the main appeal of building this arm... FORCE (I'm not building armies) was to have a strong vidual impact. So deal with it.
And yes, sourcing the land speeders was tricky but at the same time I fell on some talented chap online who had designed those marvellous Deo stick grav attacks and I just HAD to use them as land speeders ! 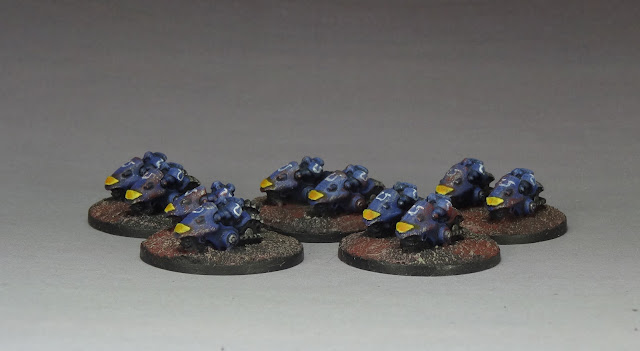 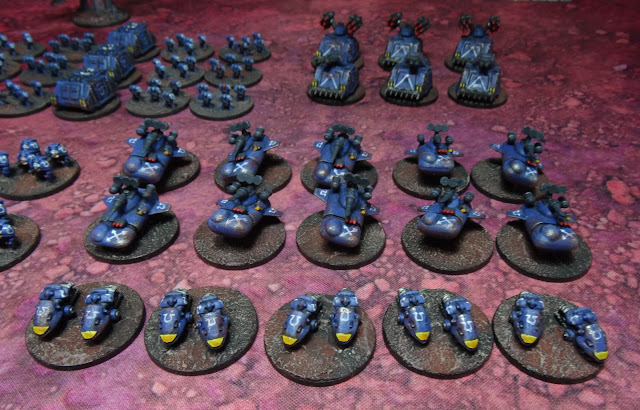 Now I just happened to have ONE land speeder and if you remember my previous posts, I needed one for my sneaky barrage warlord titan !
The shooting platform grants a free land speeder the titan can use to draw direct LoS even with barrage weapons, that's getting close to meta BS but I just had ti try ! 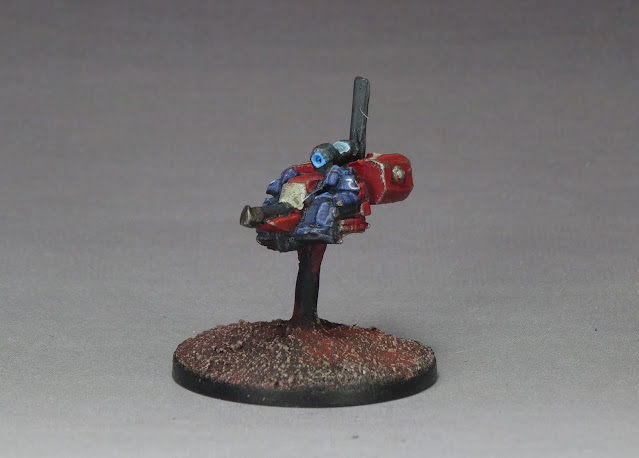 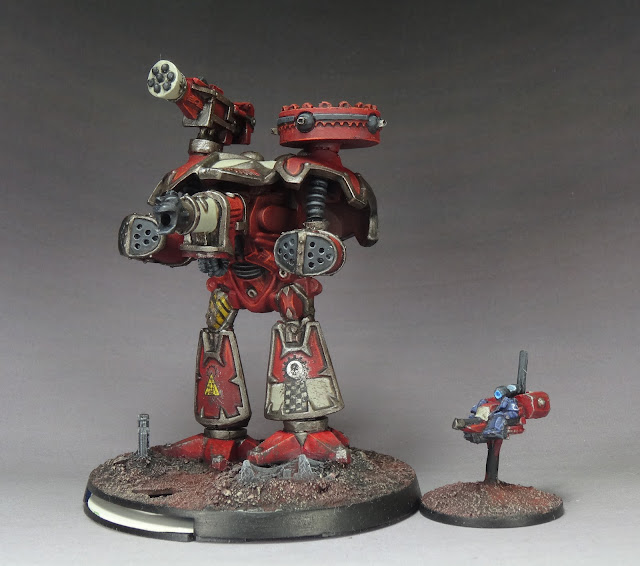 Now if you remember, the 2nd edition box comes with more than marines, there are orks of course but there are also buildings !
A few decades had taken a toll on them so I decided to fix and upgrad them a bit ! 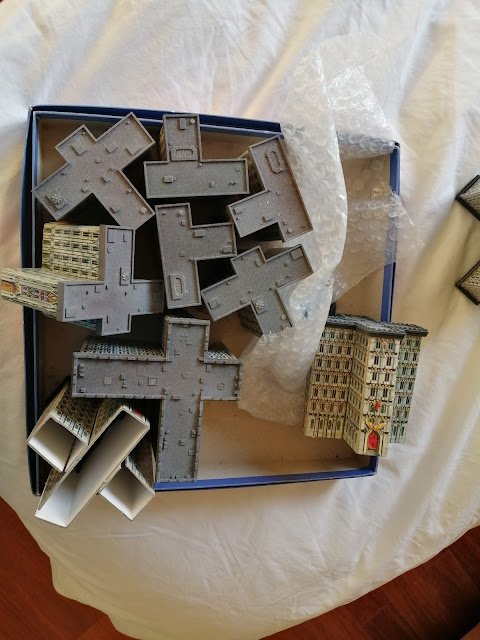 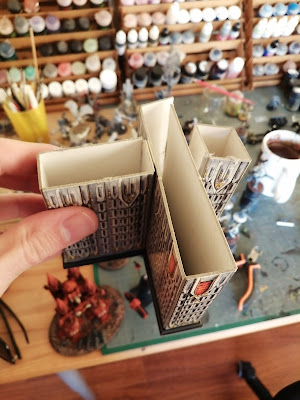 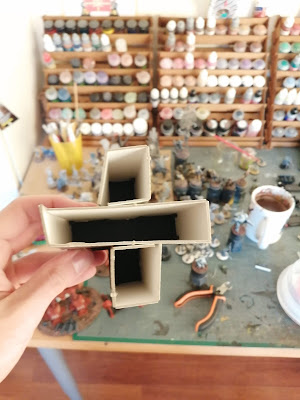 So I measured the inner space for all the sections and found the appropriate wood profiles to just cut and insert. 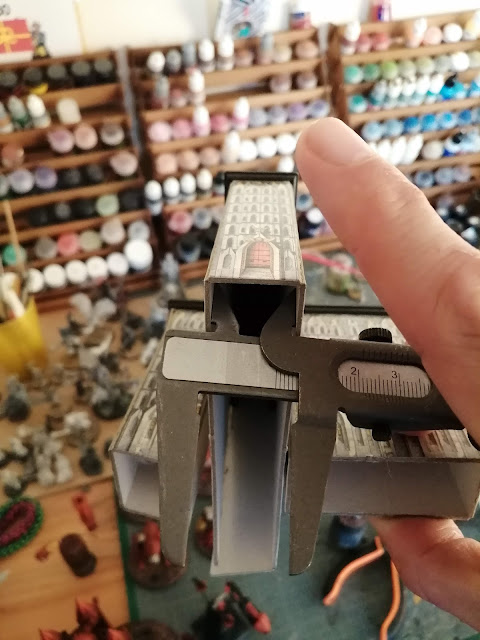 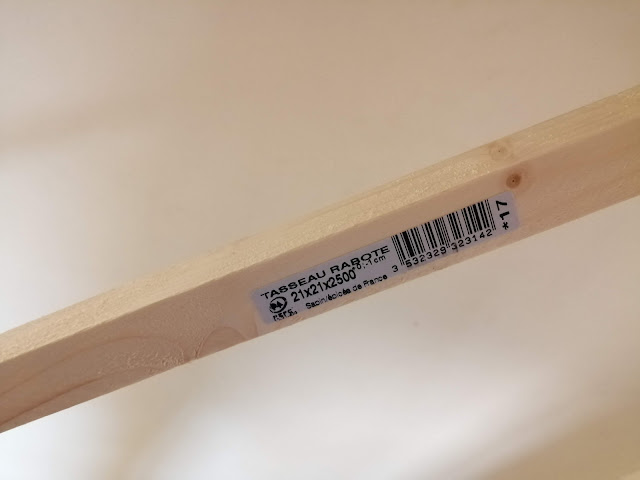 That solution has the benefit of being cheap, extremely quick and while making them considerably stronger, it also makes them more bottom heavy and hence stable. Win on all points ! 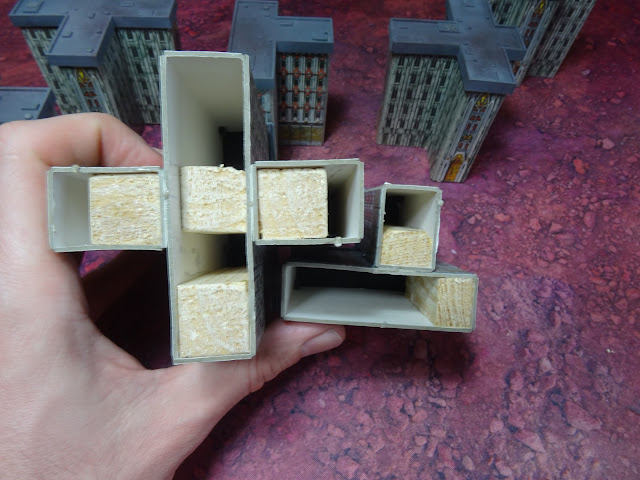 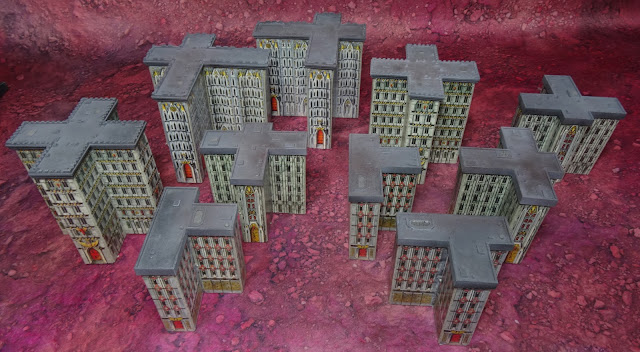 Now that's 93 models out of the desk and it's defintely left a void ! It does feel hugely satisfying though, first because because it gives me a huge achievement kick and I feel like doing right rewarding the generosity of my friends who provided most of what you see here. 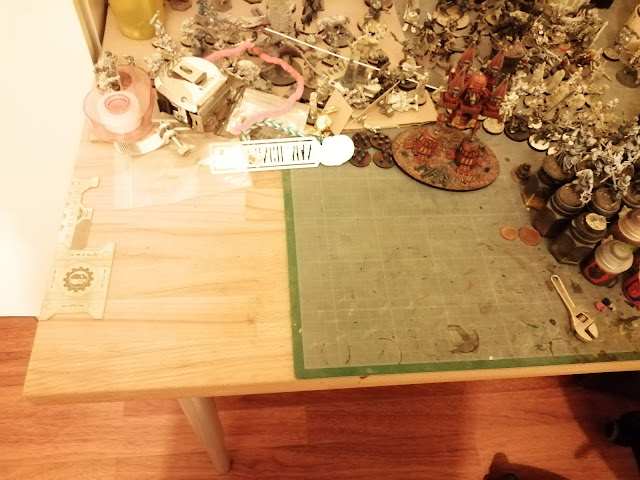 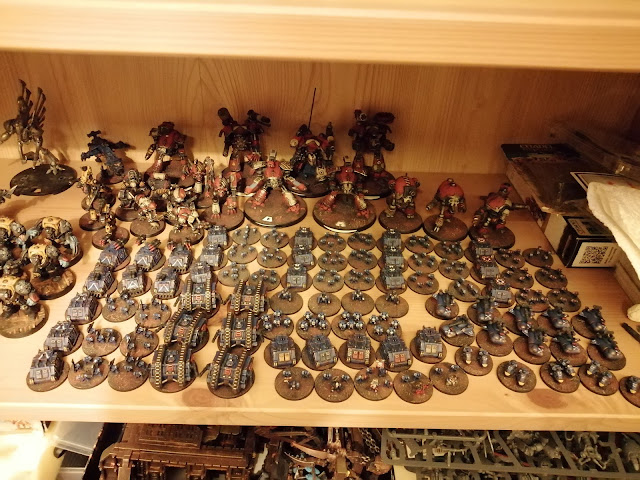 Now the eagle eyed among you will have spotted the possible following steps for that project and I have scenery well in progress which should be faster now that those are done !
I wish you all the best and a happy painting time to all !
Publié par Asslessman