I am not someone with a lot of personnality... Whenever I see a good idea, I feel like giving it a go...

You may remember Axiom and Colin recently had a go at creating little mutated creatures for rogue trader and this gave me the will to try to do some myself... 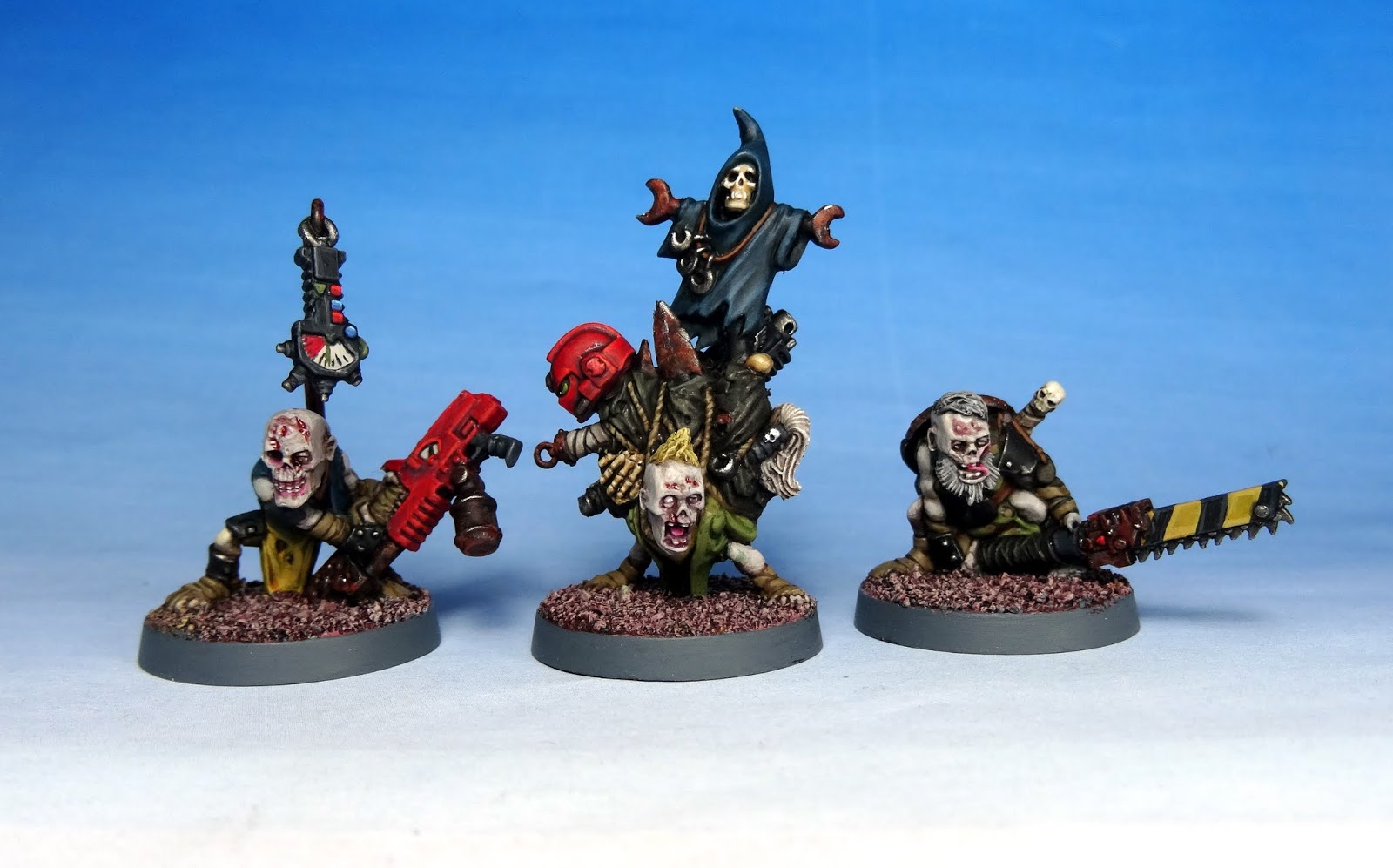 But why would one want to create small, weak, painful to watch, useless models ? Well because they sort of define the kind of setting you want for your games I guess. You want a world full of characterfull heroes ? Good for you. I do prefer (matter of taste) having a bit of everything making the average guys look handsome and villains making normal dudes look like heroes.

Besides, the older illustrations are full of those little creatures. Nomads have them :
Techs have some too : 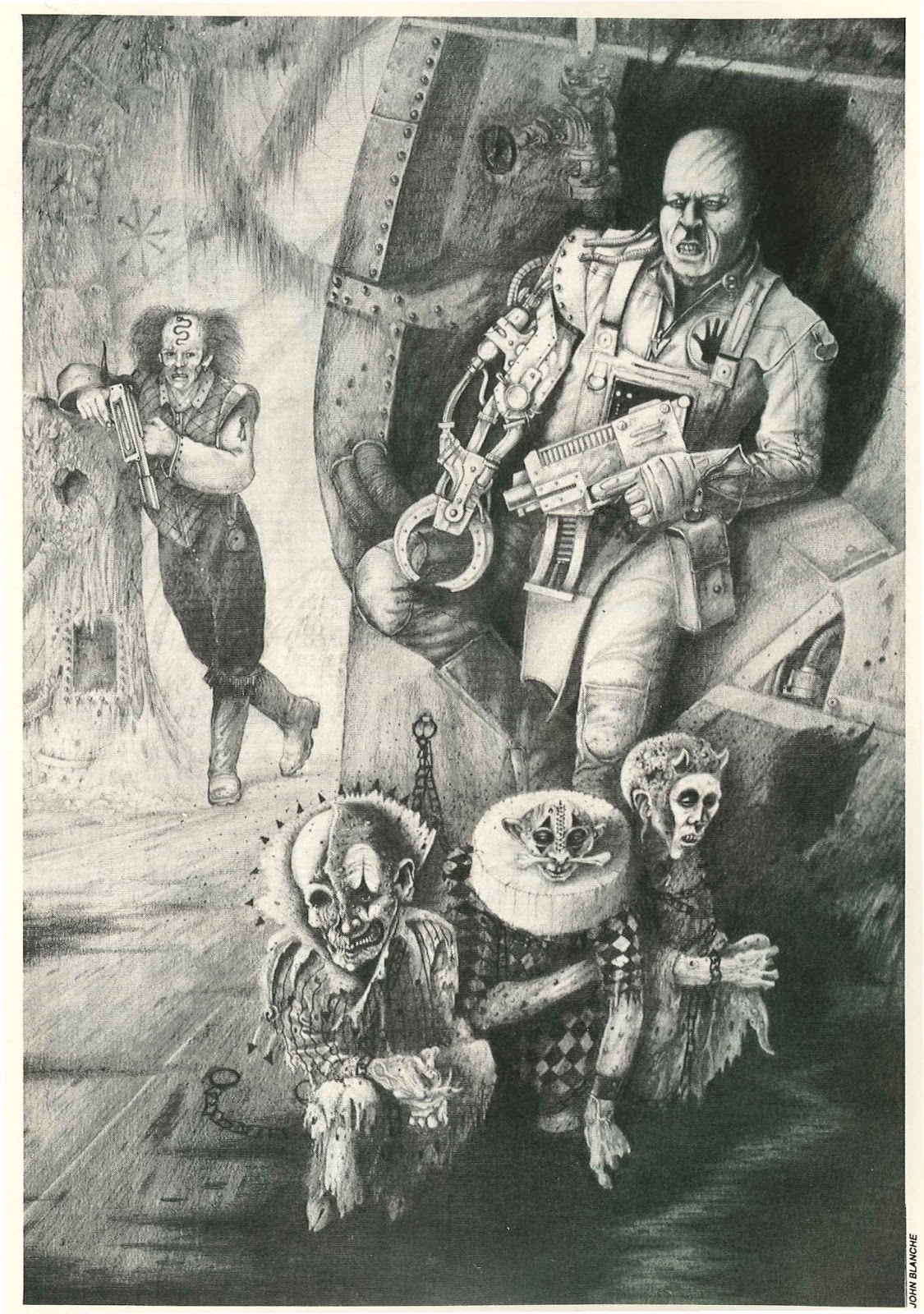 And even adeptus mechanicus priests have their own : 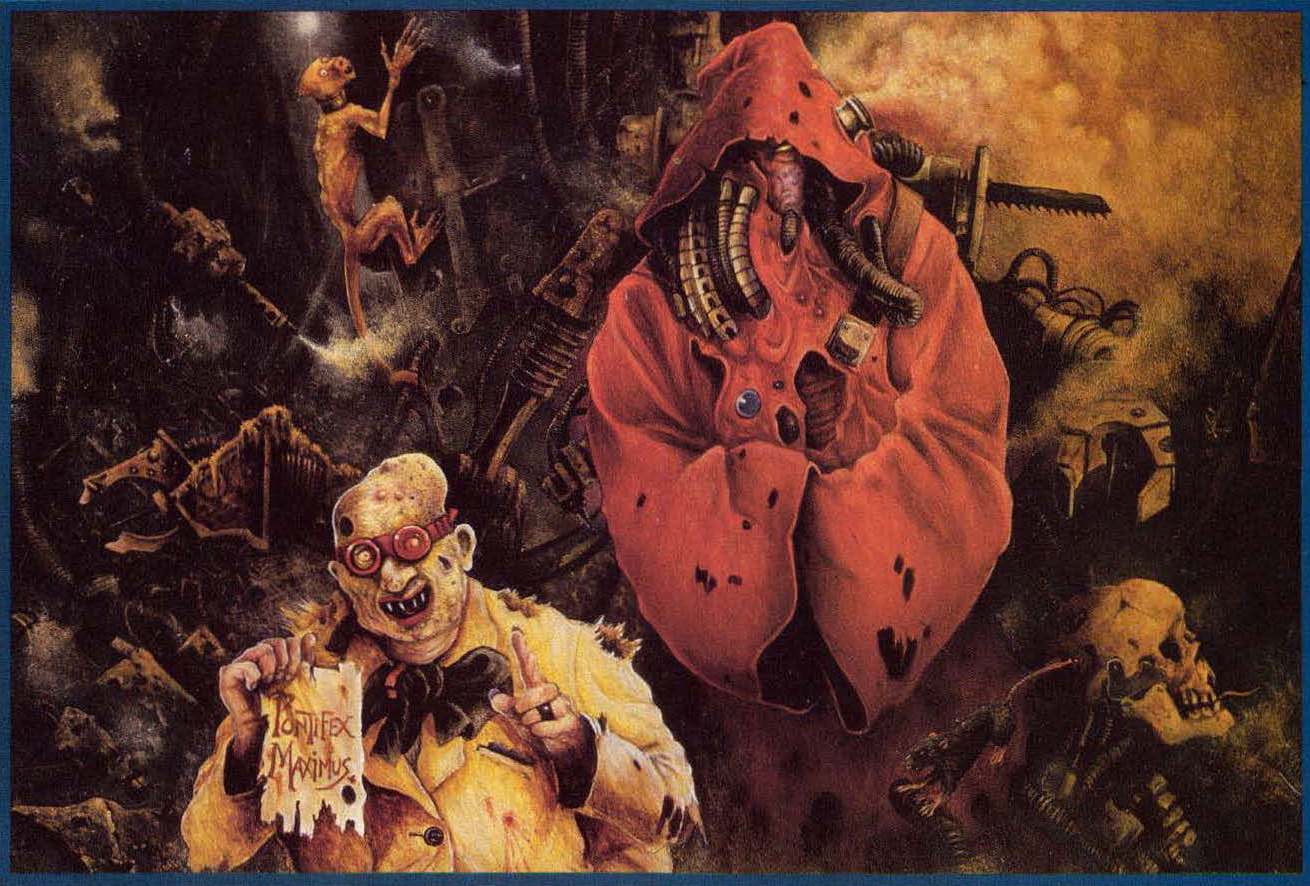 My base models were plastic gnoblars I must have got via mail order when the first ogre kingdom was released and I ordered bits for my chaos army. I did try to paint them at the time but they were so boring they've remained half painted for nearly 10 years...
Until I decided it was time to get some Punk stunties (let's call them stunks from now on). Adding zombie heads was the easy way and I have to admit I stole the idea from a WD with zombie pirates in it.
For the first one, I used what is probabaly my favouriute zombie head and replaced the mace with a reduced chainsword blade to make it look like some industrial cutter. An elegant hairdo done in DURO and filing the wood grain on the shield were the next two steps to the transformation : 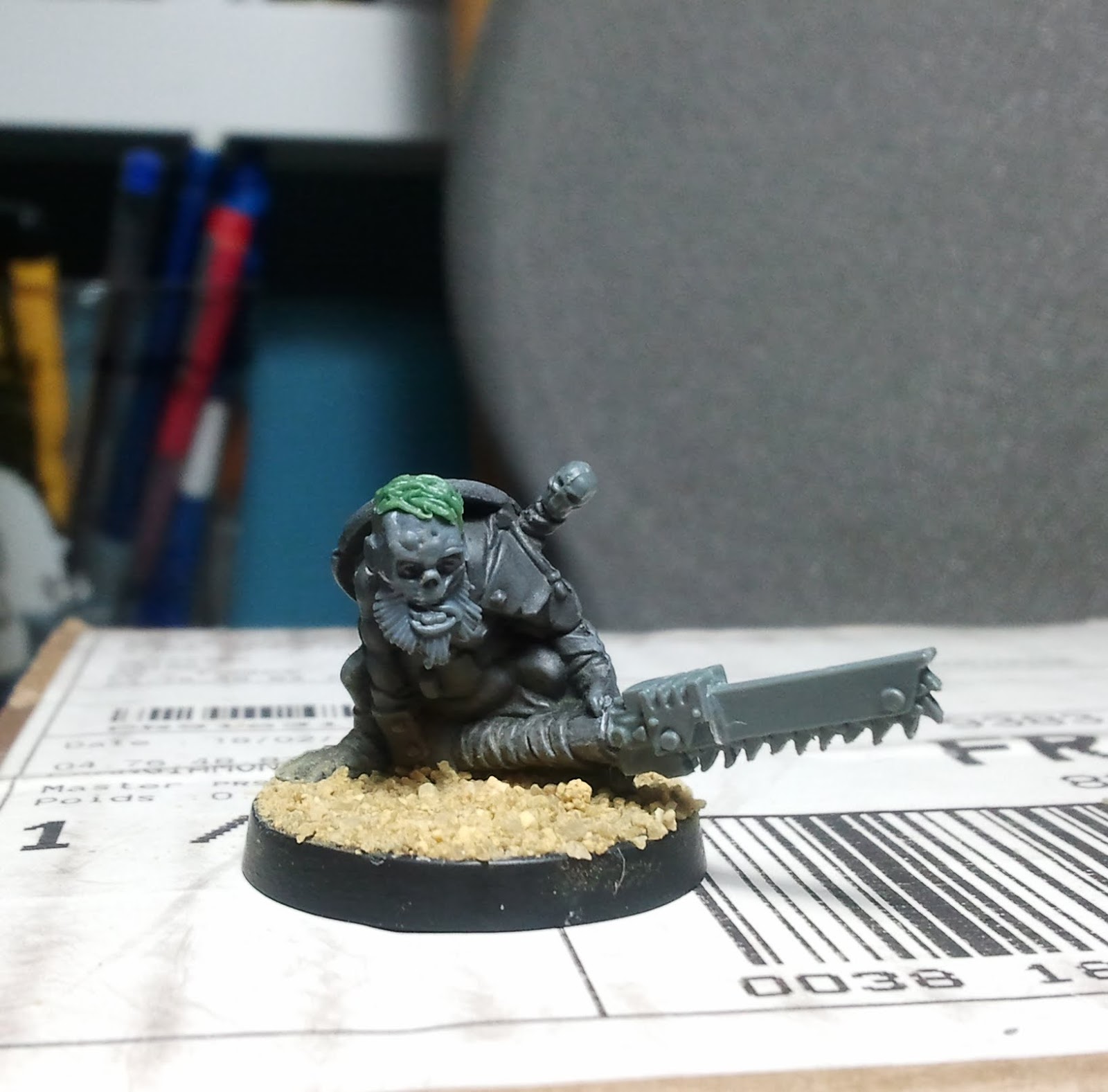 Painting wise, I opted for a very pale skin tone to represent the hazardous environment these creatures live in. You probably can't tell from the pics but this one is wearing a camo vest underneath his armour parts, probably remnants of clothing he found on a dead imperial guard...
Just to set the model a bit more in a futuristic environment, I painted the sanded shield as a "no entry" road sign. 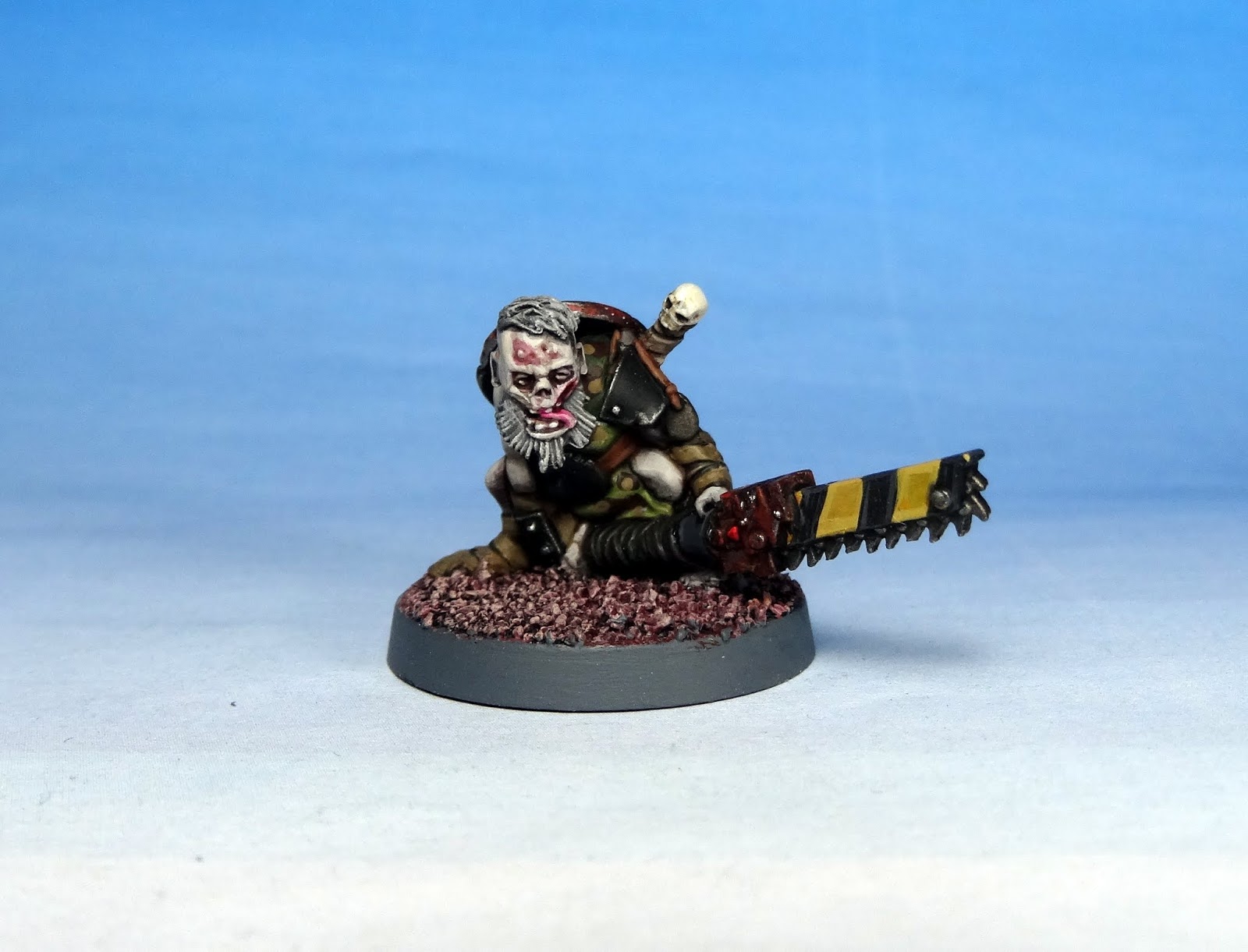 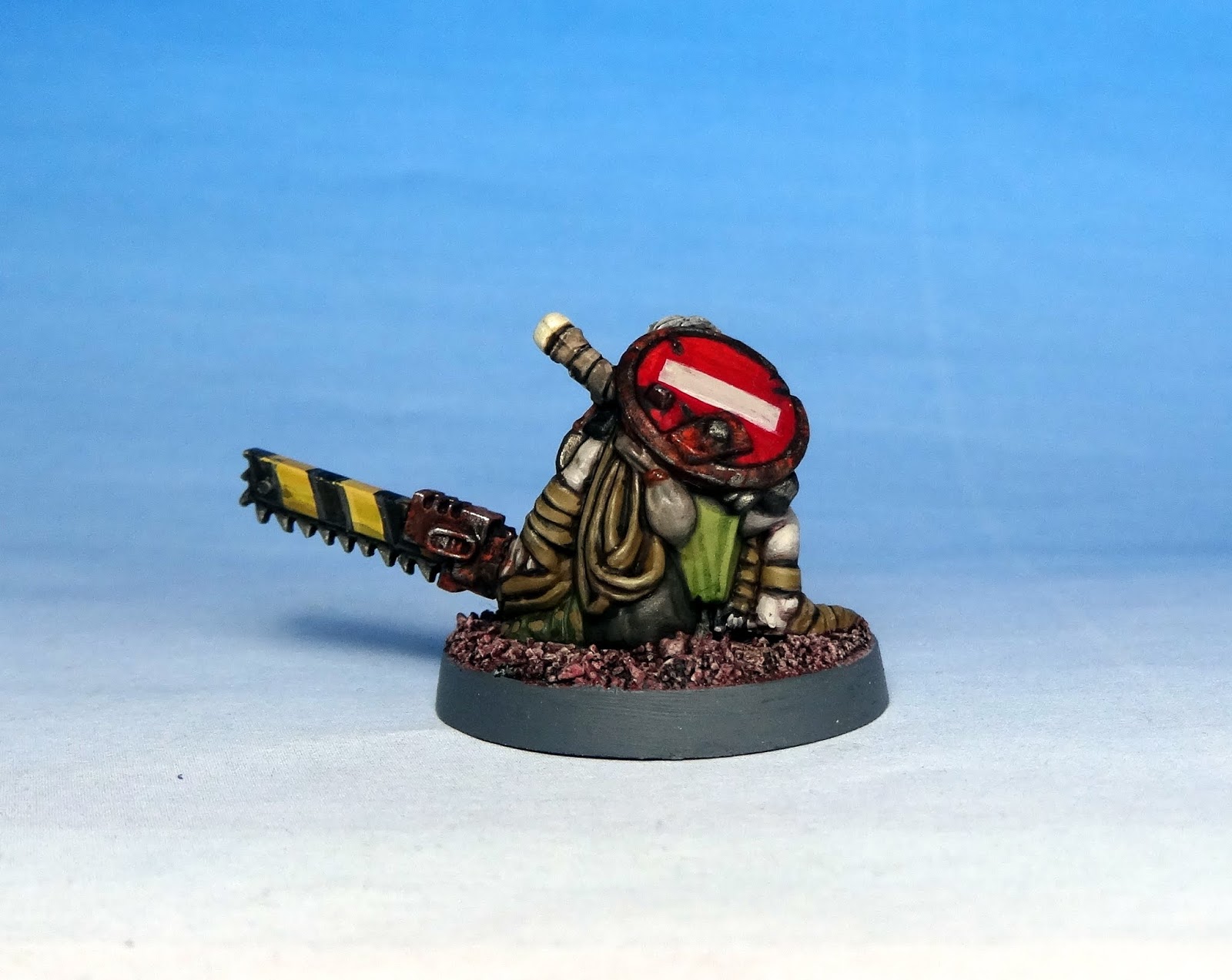 The second Stunk was also based on a plastic gnoblar with the addition of a zombie head but for this one the conversion job was a little tougher. I removed the mace the model is normally holding to replace it with a salvaged flamer like if the model was taking it from the ground. I also added a banner with an auspex in his back.
There are 2 reasons to this. The first one is I believe this little group lives of the sale of salvaged items from the underhive. Having such a handy item on display is a way of advertising their salvaging skill and the kind of items they can retrieve. The second reason is a bit more practical, the auspex is actually recording levels of radiation and toxic fumes around so that the party doesn't stay for too long in hostile places. Having it hanging from a pole makes the sounds of the geiger counter and toxicity meter audible for everyone in the group. 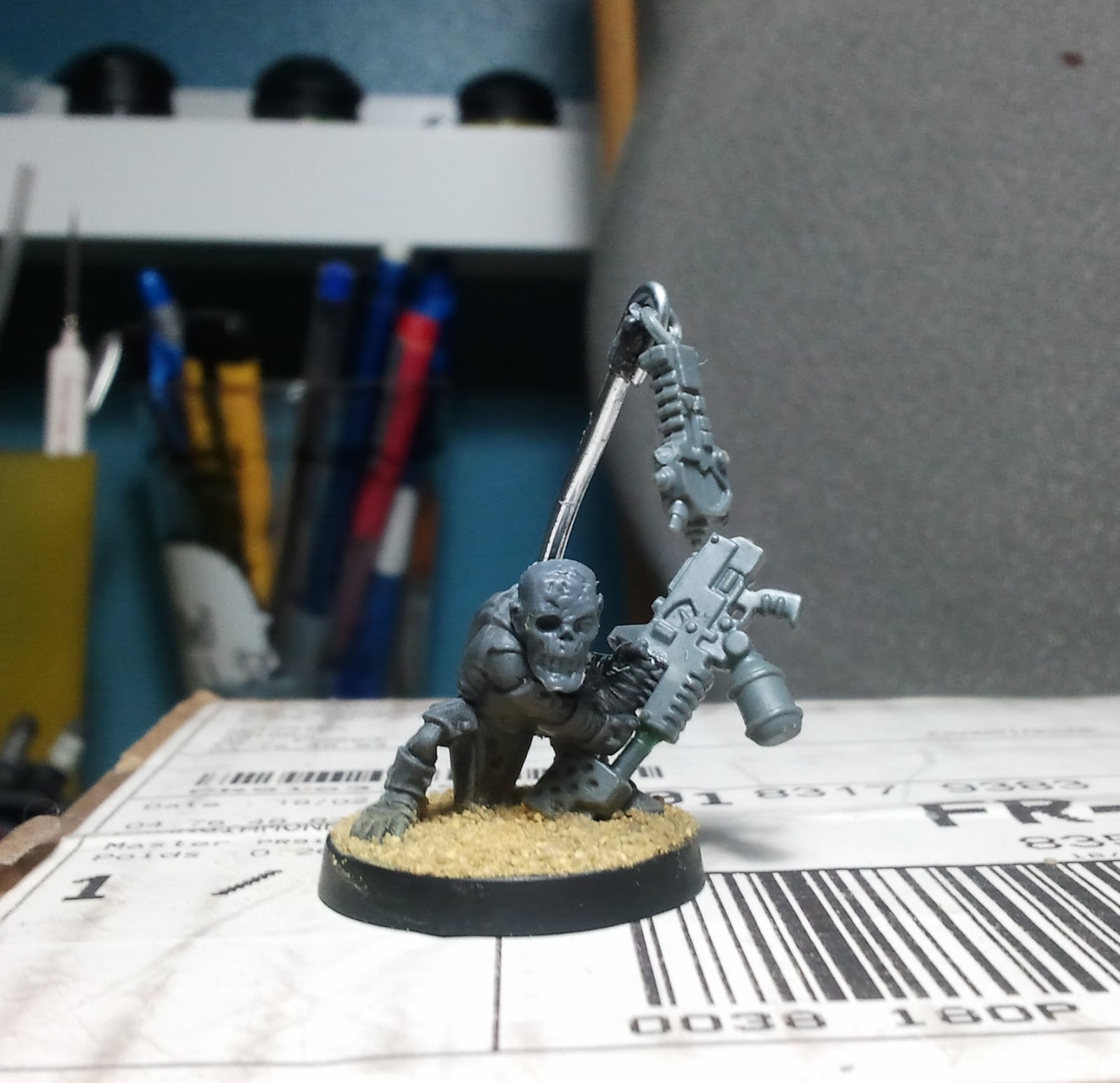 Painting wise I kept basing colours, opting for bright tones to show how those stunks want to show their pseudo wealth... (and their general lack of taste) 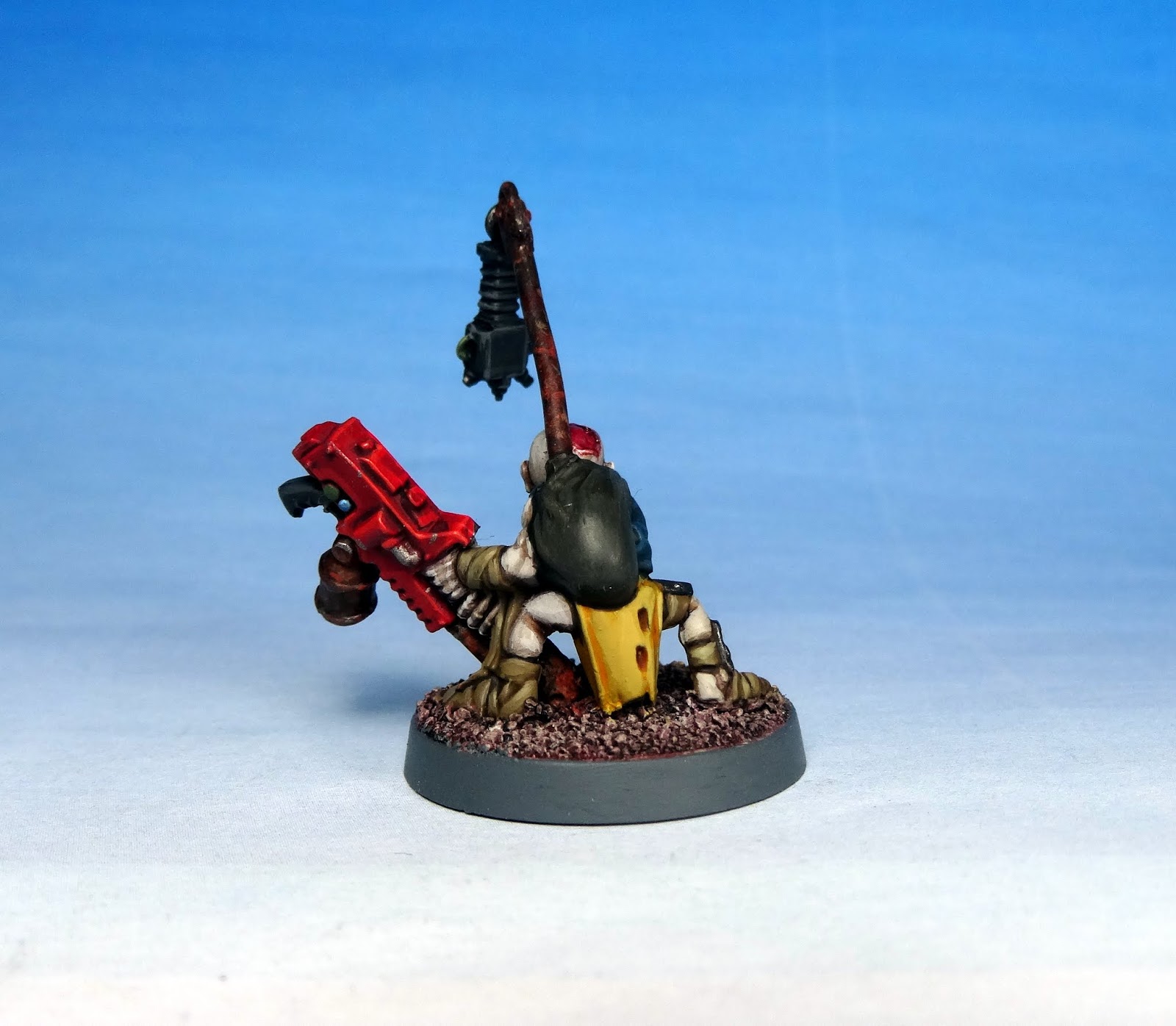 I hesitated a while before doing the last one, I thougt the original body was far too comedical for the grim darkness etc...but  after second thougts I came to realise it was probably what would make the other 2 even darker and creepier... (like the contrast I talked about above).
That's why I added him a night goblin banner (salvaged from a random bits box at my local hobby shop). I just added the mandatory zombie head and a couple of valuables in the form of space marines gear. 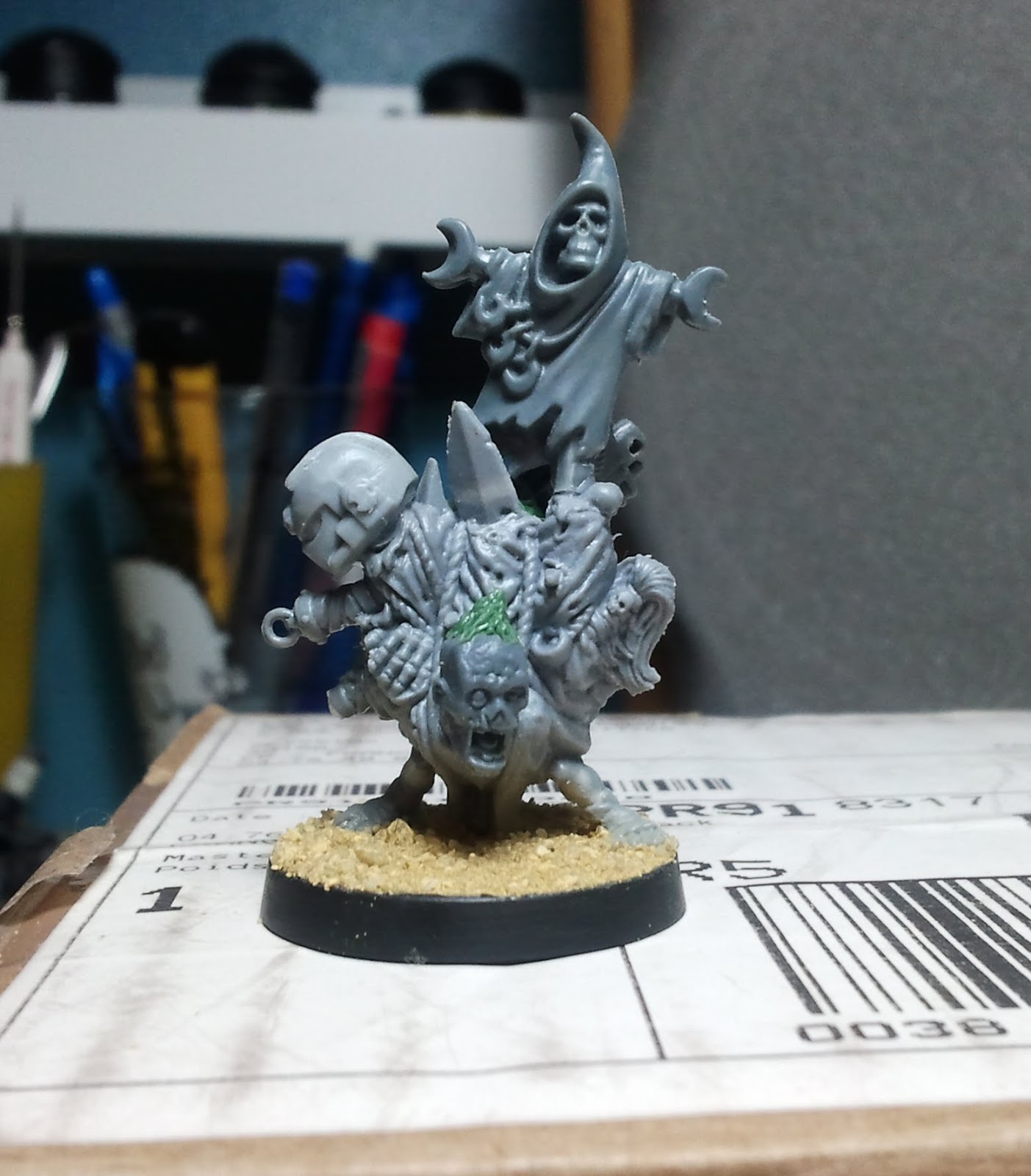 Painting wise, I decided early I wanted to paint the marine bits as Blood angel just to echo the picture from confrontation I know the helmet should have been a MK6 or "beakie" and the bolter doesn't match either but this is more evocation than slavish reference really. 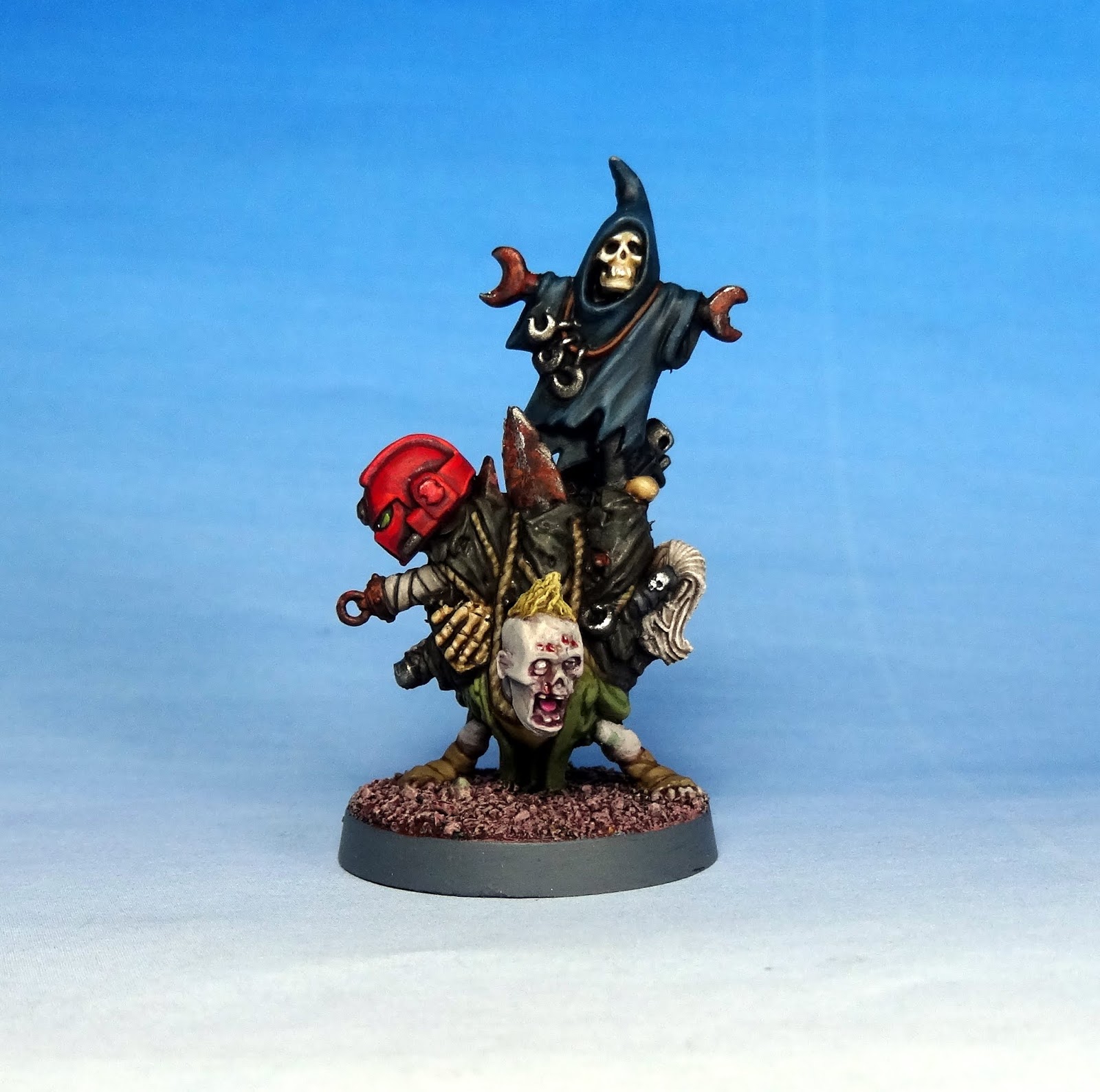 All in all, these 3 models will most probably be my last for this year which means I will probably right a review of 2014 in little time...

The real funny thing about this is that without any agreement between us, Theresponsibleone has just been doing the same thing HERE.

For now I leave you with a comparison shot of the Squat Hovercar from Bob Olley's Iron claw range...
... along the latest space dwarf sculpted by GW (to my knowledge)... 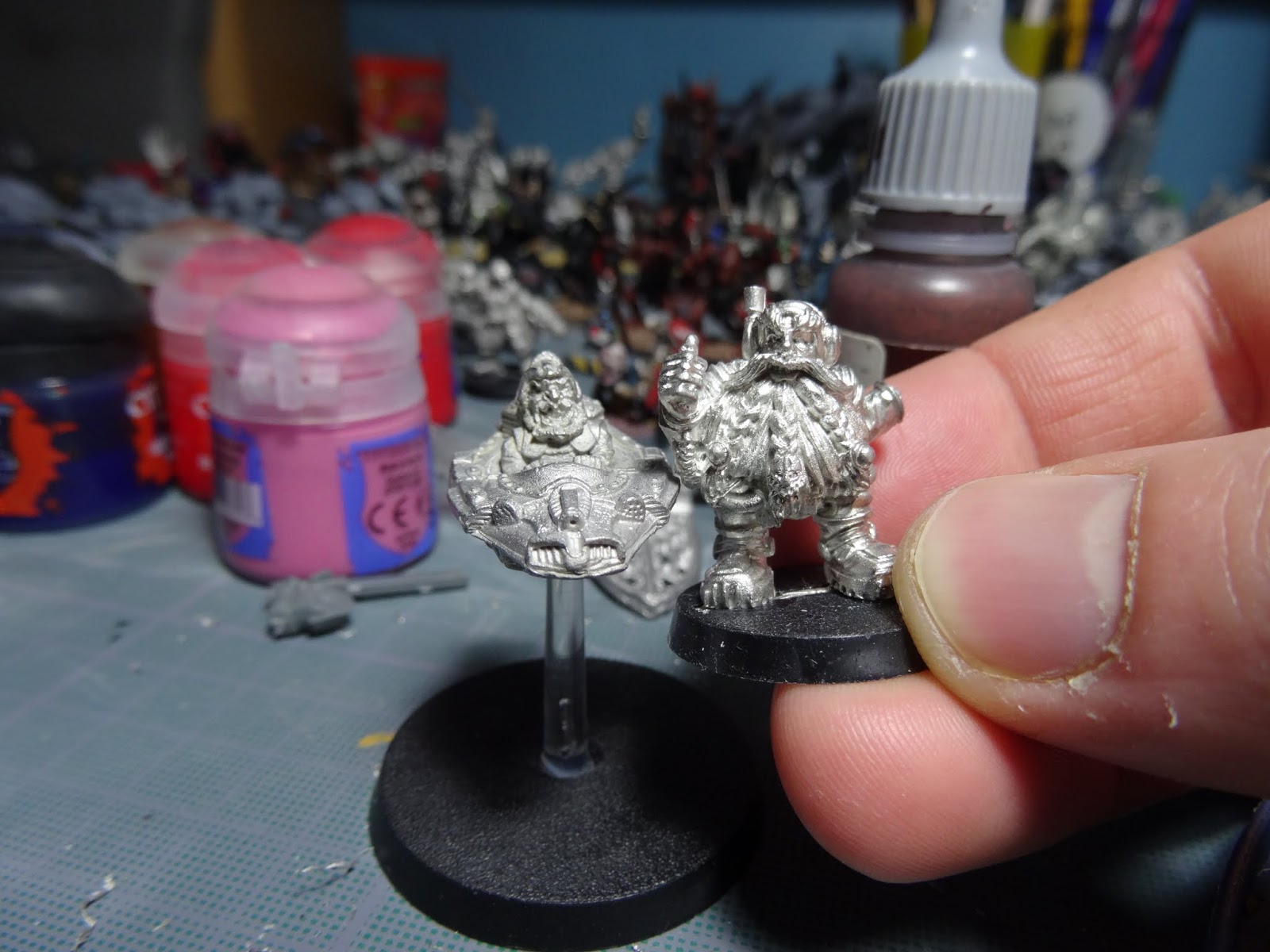 to be fair, the hovercar looks small even next to squats of the Rogue trader days... Guess we're going to count this one as a space gnome then...

Oh and while we're at it, I decided to remove the spear from this lad without damaging anything... 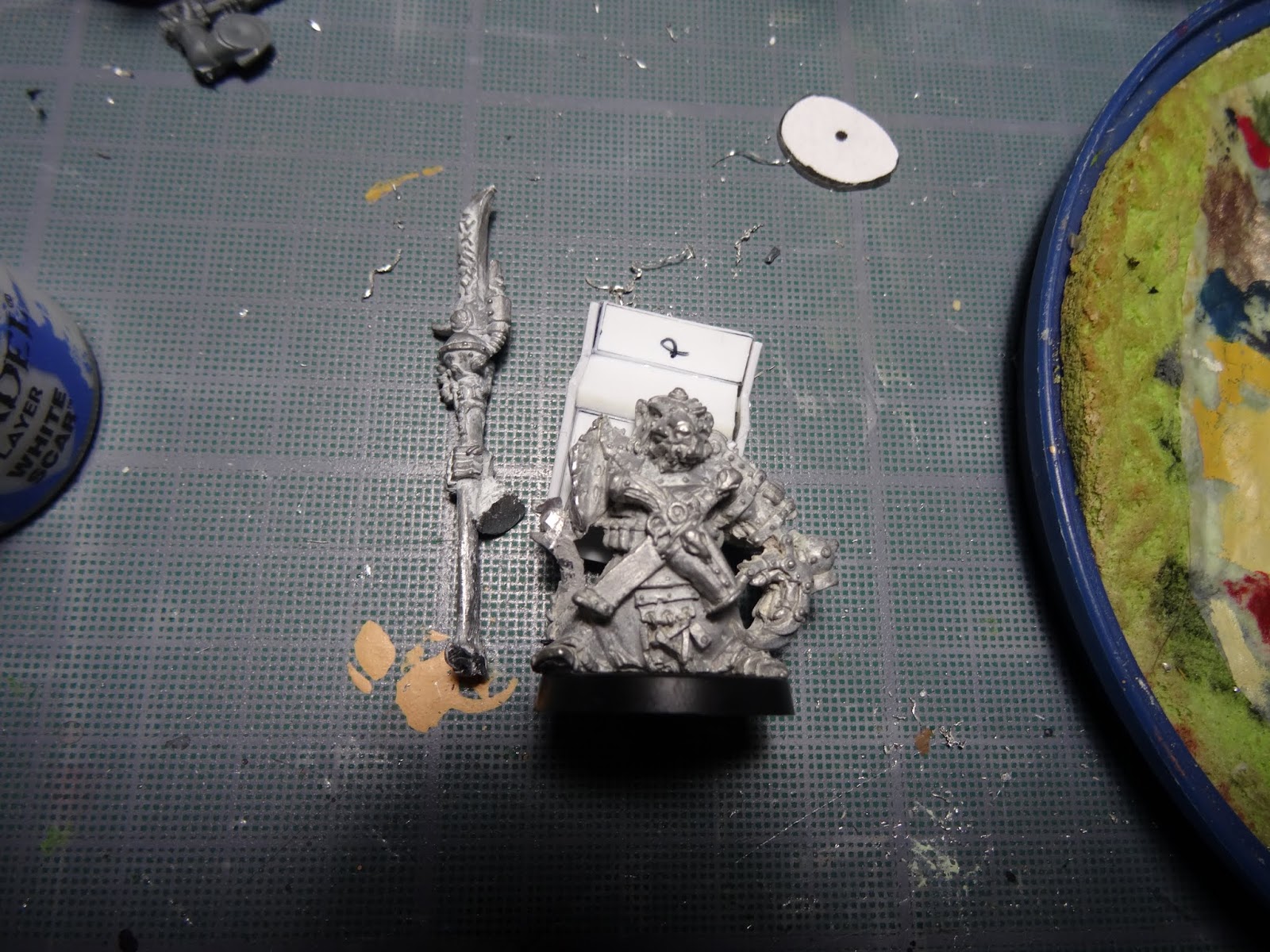 Successful but man what a pain... will it be worth the pain? We shall see that in 2015... for now I have some bounty hunters waiting fro some paint and preys...
Publié par Asslessman