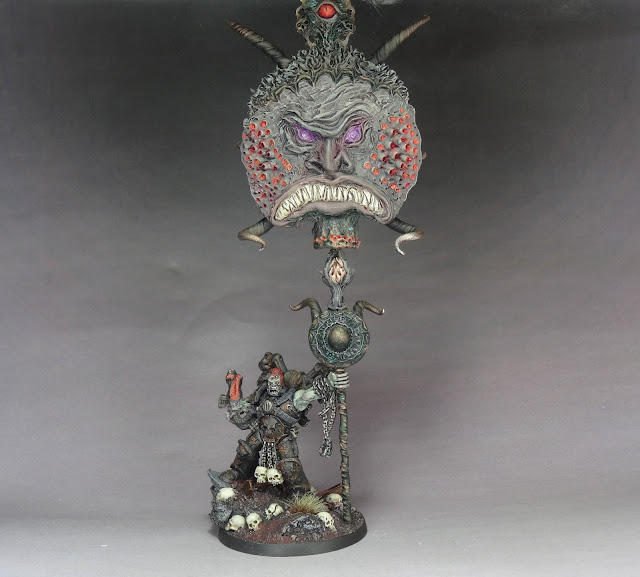 Hi everyone ! Long time since last time heh ? Well I've been busy moving house so getting some hobby time and a proper desk has taken a while but all worth it !

I've decided that moving house was going to be the opportunity to move on and following the choixe to clear my desk as much as possible, I've decided to finish some projects that have had way too much desk time !
This one is probably one of the most iconic cases since it's already undergone 2 house moves. This project was started a bit before the 28mag Ian Miller project and although I was very into it during conversion and building, I stalled at the painting phase, not knowing where I wanted to go.

The banner was sculpted by the most excellent Roberth Breséus I strongly advise you to follow on Instagram who created this very unique piece for me.

Back to the start, I saw Roberth sculpting some splendid banner for his armies and saw the immediate answer to my banner needs. I've alwyas wanted a huge centerpiece for my chaos space marines without finding the right answer and here it was under my eyes !

Roberth has an impeccable talent to channel the imagery of behemoths like Ian Miller or Philippe Druillet : 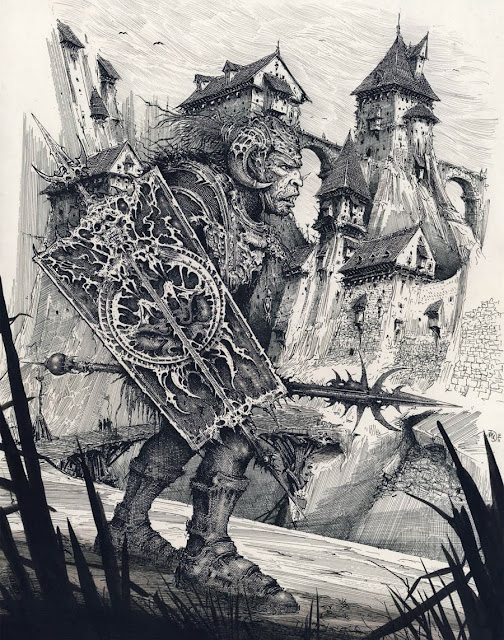 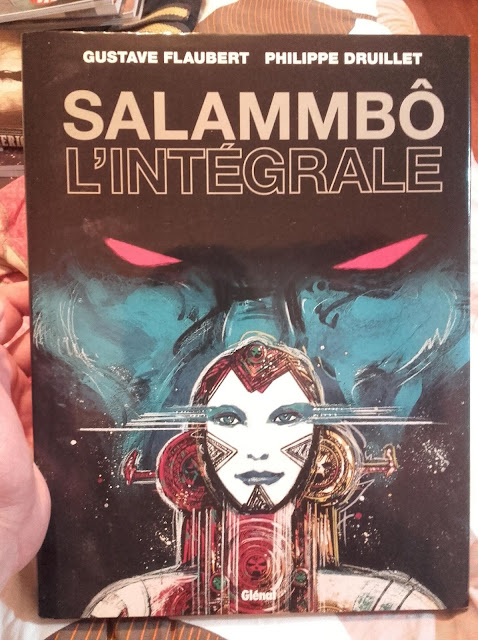 So here is the banner he came up with : 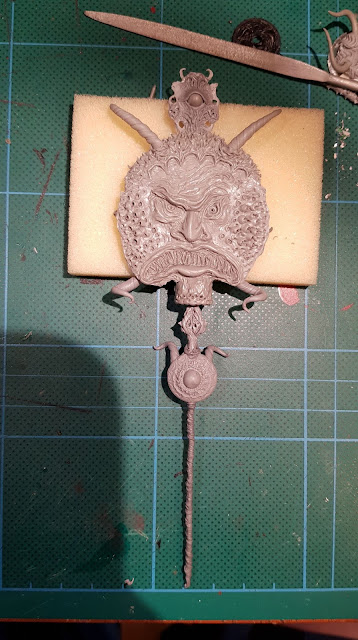 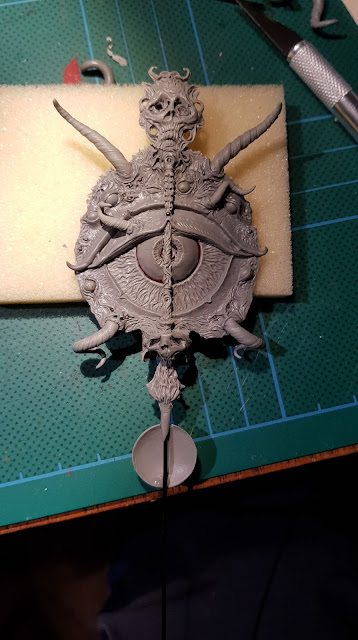 I had just painted Kharn the Betrayer so I knew his body would be the perfect donor for what I wanted, I needed a standard bearer who looked strong and firmly holding his position so I used his body, the mutated gun-arm from a khorne champion and a scavvy head (all from Jes Goodwin). I also did a couple of back packs and would later pick the favourite (made from a metal renegade pack and Ahriman's). 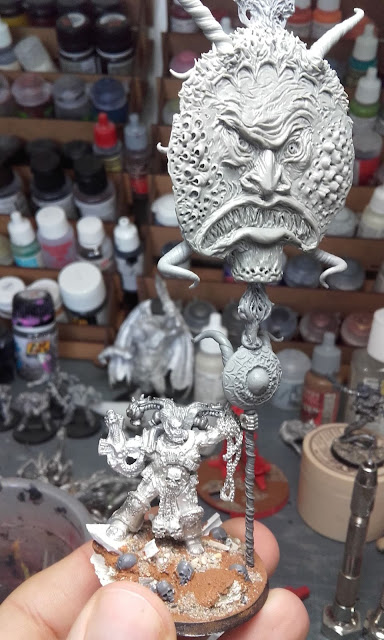 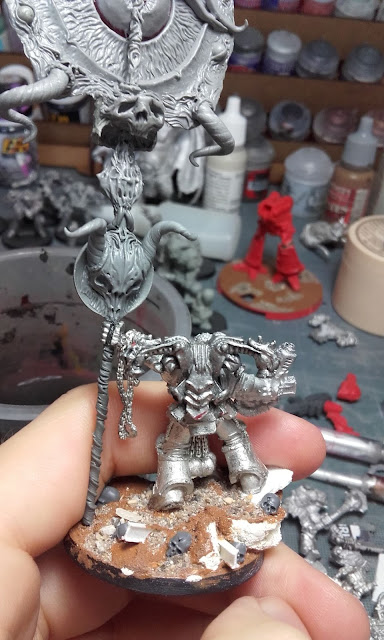 Then when the Ian miller contest started, this is where I got and where it stayed for years ... 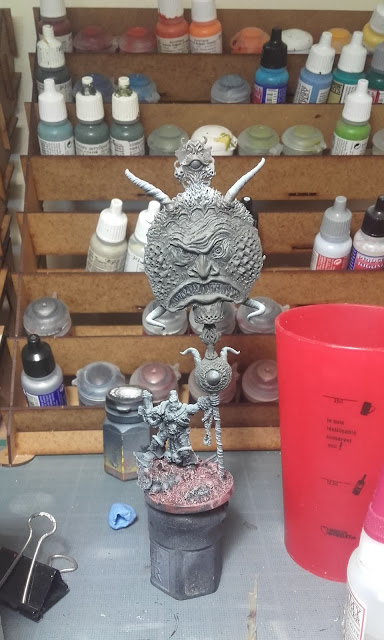 Some projects stall for some reasons I don't fully understabd, sometimes, it's too big, too time consuling, too difficult... I try to avoid getting frustrated over such problems because it's still a hobby for me so I just put things aside and eventually they just take your fancy again and something clicks.
When I picked this one a couple of weeks ago again, I somehow knew where I wanted to go and I got exactly where I meant to be, it just took me several years to figure it.
Now this model, as you might have guessed, is an absolute nightmare to photograph properly. There are nuances I would want to show and details that just seem like a blurr but my photo booth is definitely not up to the task for models of this size I'm afraid, I hop you do get the idea.
The idea was to blend organic and inorganic, metal into flesh, into bone, all fused with malevolent warp energies. 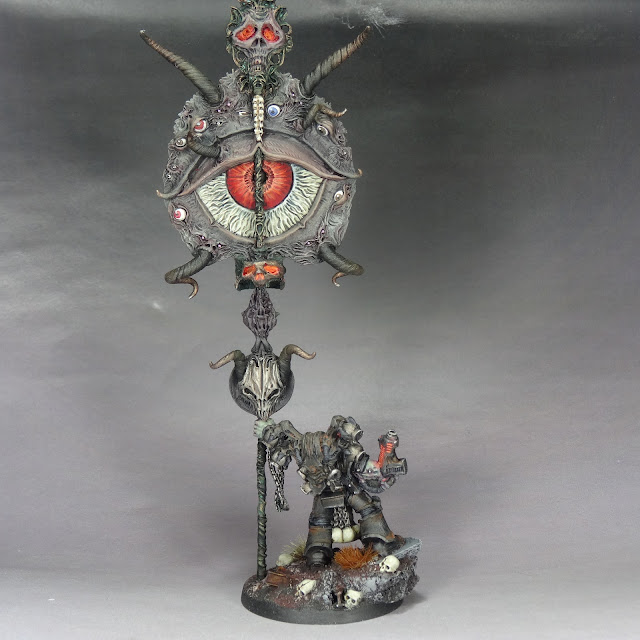 This might seem like a mundane element to some but I'm also very glad that despite being top heavy, the model is actually very stable thanks to the materials involved and the well balanced base. I'm not sure how much game time this one might get but I like to have the option ! 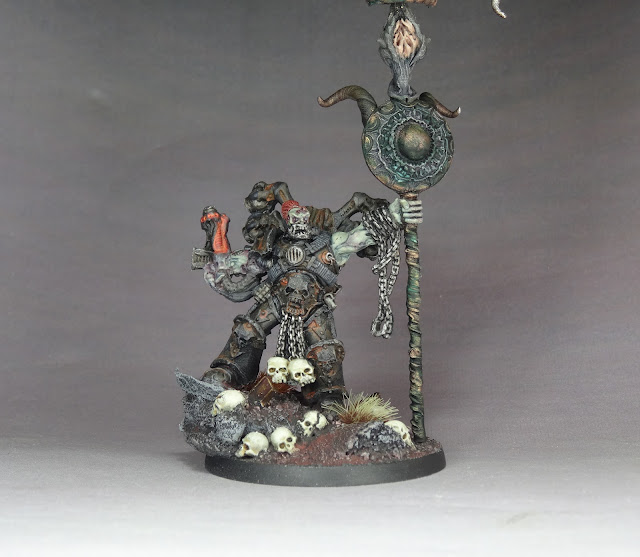 I'm really pleased with the general pose, the little nod to the "one foot on a rock" pose but with the sense of weight right. The banner is so huge that it wasn't easy to find a way it wouldn't overwhelm the whole model and I like to believe I managed it here. 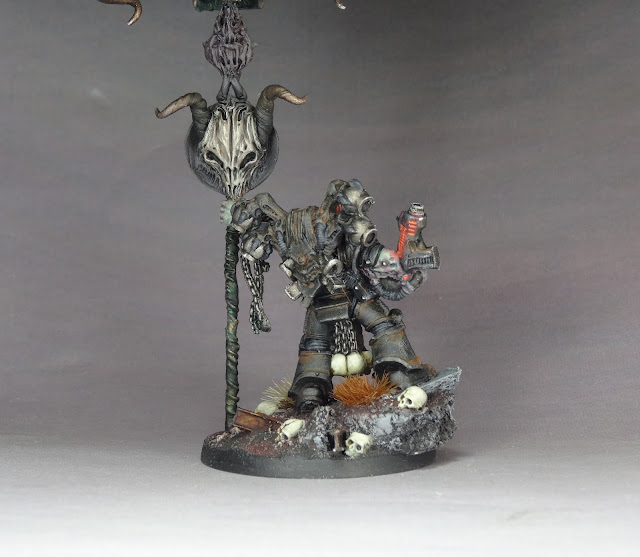 The main face looks a little pain here but I ensure you there are more nuanaces to it actually ! 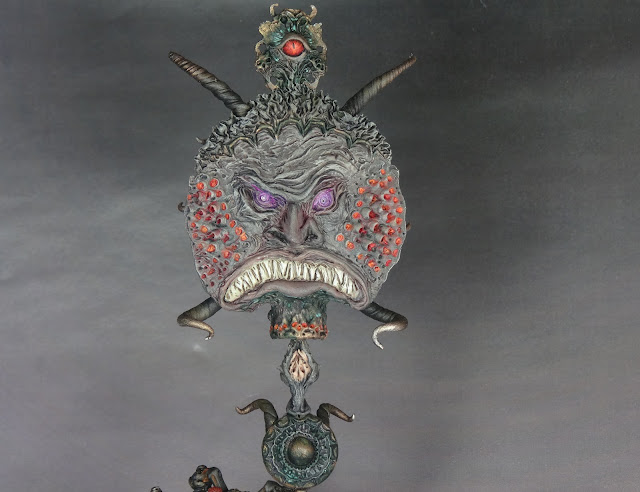 I absolutely LOVE the myriad of eyes in the back of the banner, like the front is here to scare the ennemies and the back is here to hypnotise and galvanise the army ! 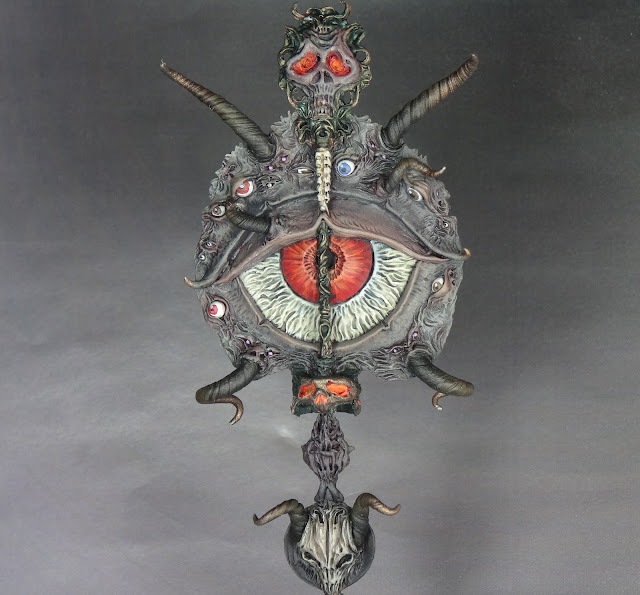 I wish I could take a photo with more models but most of my painted models are still stored in boxes for now, I'll do a proper photo with the whole force as soon as possible though I promise !
Thanks for watching and happy painting all !
Publié par Asslessman