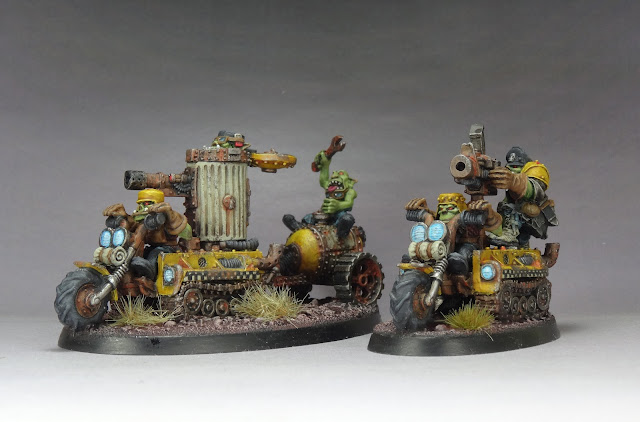 Hey everyone ! So you know what month it is right ? It's freaking october, you heard that ? OrCtober !
And what do we do on ORCTOBER ? WE PAINT ORCS, THAT WHAT WE DO !
Now to be honest, I had a few hundred things to pick from if I wanted greenskins so I picked some of the models I've had for a while and which really tempted me, namely the wartrak (minus field gun) and Scorcher !
Now these are the first iterations of their respective concepts and are pretty much the best sum up of what Rogue trader is. The designs are VERY compact, to the point where the ork riders are smaller than the gretchins and the Nobs are beefier than the vehicles !
They make no sense but that makes all the sense !

I was faced with a puzzle right from the start, should I build them entirely or break them into several pieces ? It turns out making the rider fit on the bike is the one tricky bit so I wasn't eager to do that whith painted parts that's why I put those in place at the very beginnning and the vehicles were pinned and based right away, I did keep the grot rider and the gunner aside to make my life easier and it turns out it was the best courseof action, I never really struggled reaching the bits between the rider and the bike (you can't see them anyway and it saved me a lot of hassle. 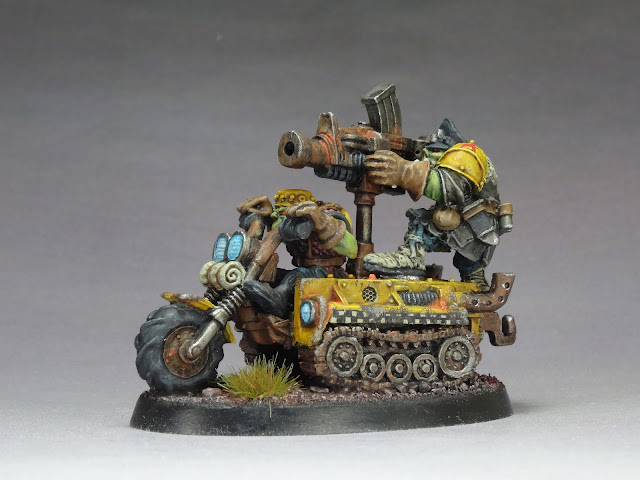 As you might have noticed, the gun I had was actually the one from the Hopsplat gun it's supposed to pull but that's how I got the model !
It's not a big deal even if I have the field gun coming and it means both will have the same weapon ! 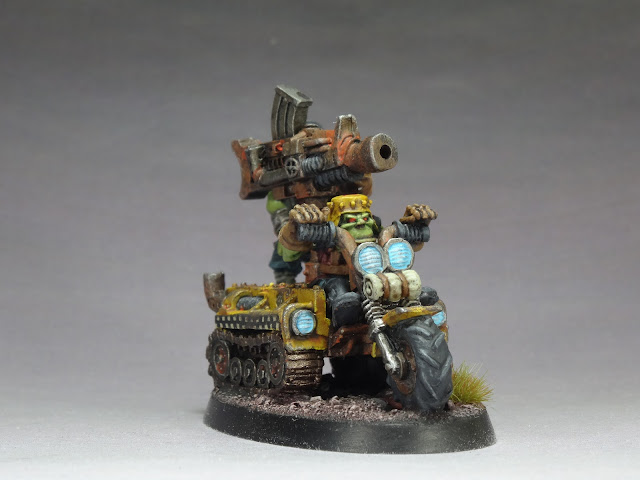 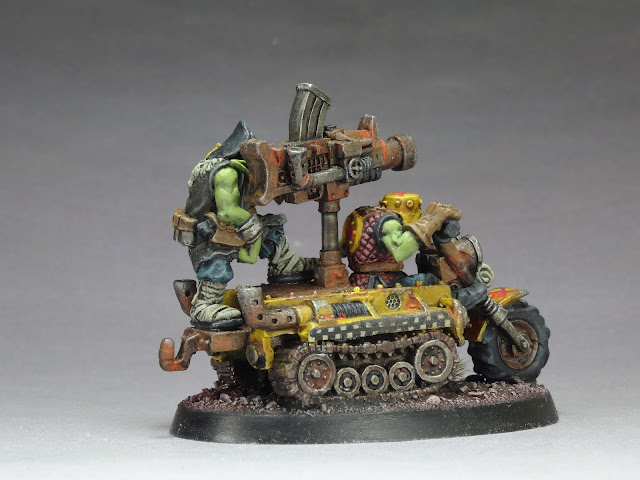 Now the Scorcher is even more crazy, just look at the size of the flame turret and how an ork could feat in here and you know how utterly bonkers and therefore genius this is ! 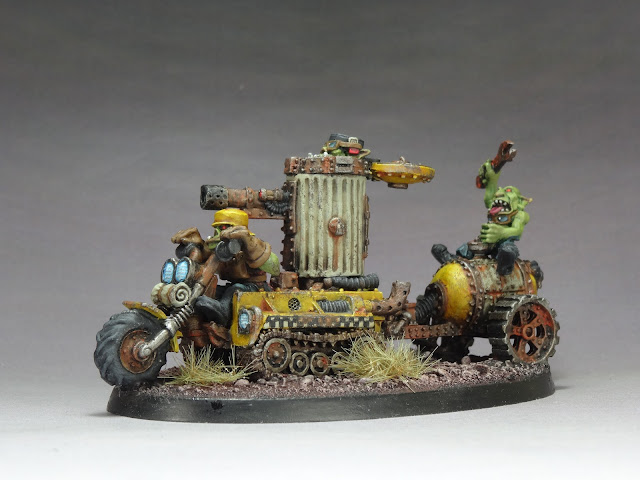 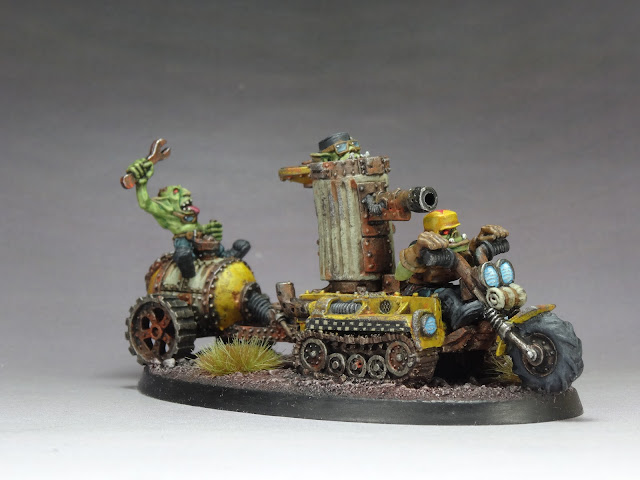 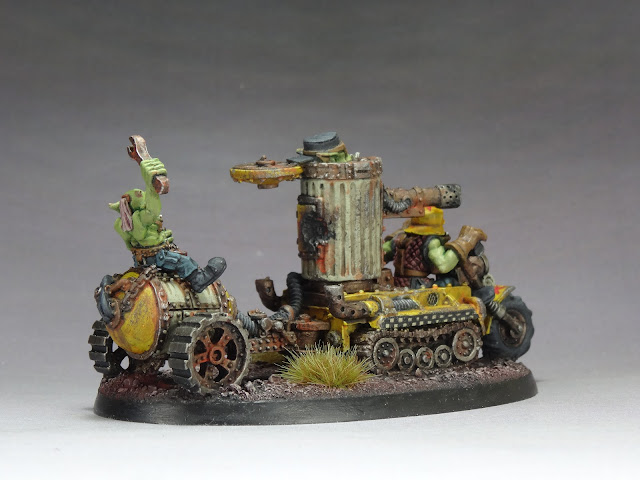 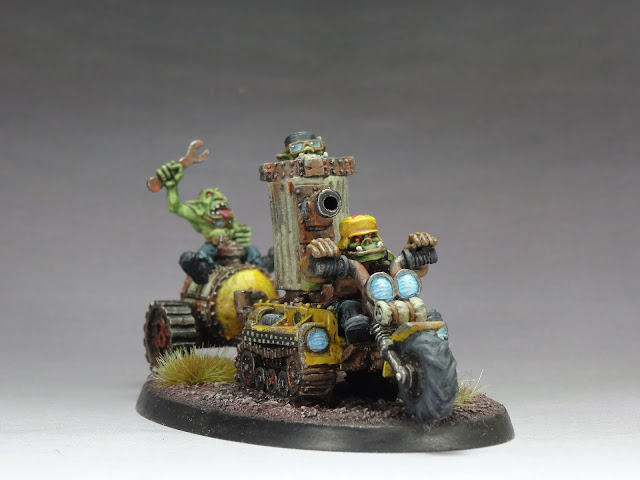 To be fully honest, I expected to struggle with these, being massive lumps of  intricate leas parts and old sculpts but they were actually extremely straightforward and painter friendly, it really felt as easy as painting 2 regular foot guys, which is partly due to me having the colours for this project well in hand but also to the simplicity and effectiveness of the sculpts themselves, another proof of Kev Adams's talent;
Here's a little pic with some of the orks of this project, it's really building up to something I like and shaping the exact way I wanted it if not a little better with the group effect.
This has really been one of the best Reward/effort ratios in a while, the pictures don't really show that with the depth of field but I'm just super chuffed about them. SO MUCH I got 800g of more of them including a catapult, buggies and bikes !

I wish you all to find that sort of simple happiness and see you later for some more Orctober probably ! 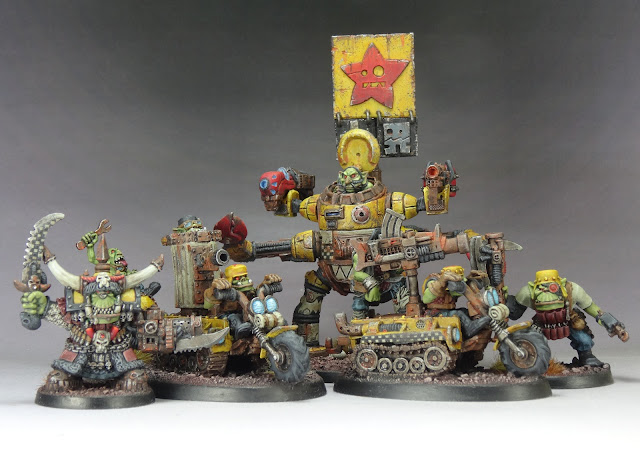