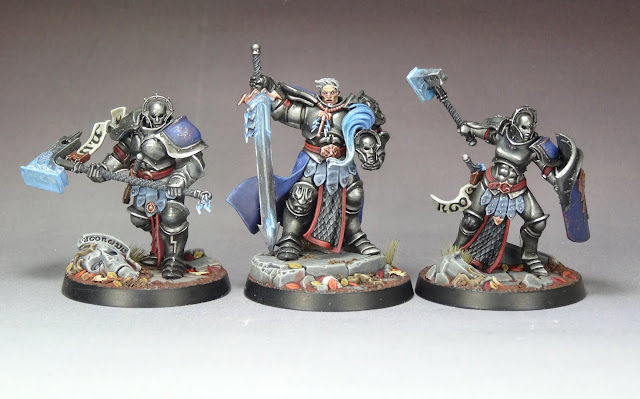 Guess what I'm back with ? Well there's not much to guess with a big picture to open the post but yeah, I've painted Stormcast. Again.
After trying Shadespire at my friendly local hobby shop, I had a really good time and immediately saw the opportunity to play this one with my non wargaming friends (the weird kind who like to play games but without miniatures only).
The bow set coming with 8 models and the bands being set as they are, I also knew there was little risk for me to say... start an new army or that kind of non sense.

Not having to paint an army is well and sound but I still had to paint the bands. Now As soon as I got the bug, I knew exactly what I wanted them to be like : 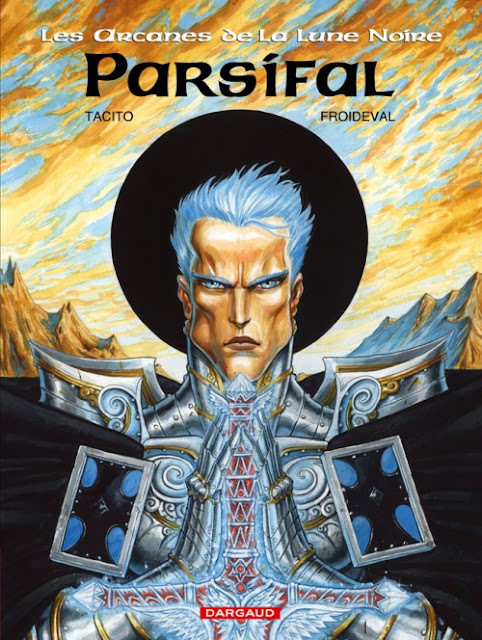 The black moon chronicles are always a good source for good characters and nice colour schemes.

Now of course, some of my fine friends suggested I tied those with my Champions of Law. Everything made that a good idea :
- The champions of Law were born as a twist to Age of Sigmar
- The colours would suit them perfectly
- With little effort I could have another unit for Dragon Rampant

Yeah but see, I see the Stormcast and Champions of Law as being no better in means than the Chaos they fight against, they just do it for a better cause or at least that's what they sell.
No, I wanted the real deal, real good guys, lawful good paladin who'll tear their cape to make bandages for those harmed, who will give their gold and food to those needing, that kind of disgustingly good character. Because I like that.
Oh and also because it would prevent me from thinking about painting more to fit with the Champions of law and I just couldn't get myself to paint models like in the box. That's the kind of rebel I am.

So here thery are, Sigmar's finest, I have to say I was puzzled by their body proportions and style. I still have to get used to how hair is sculpted on new models and I still cronge with some undercuts in plastic models.

Those guys are also HUGE, I mean, I first thought it would take me a couple of days to paint 3 guys in steel armour but the size of them and the number of details, edges and all makes them far longer to paint with my style (entirely built on vintage lead).
I'll have to come up with something else to paint others in that style really.

This set is a good start though since it's the smallest so far and all the characters have individuality and style.


Another new thing for me were scenic bases ! I've never painted any because I'm lazy and I want every model to be based the same way. Now here the models are meant for Shadespire and Shadespire only so I thought I could just go to town and have so fun !

Just look at those bases with just a quick wash over a grey undercoat ! 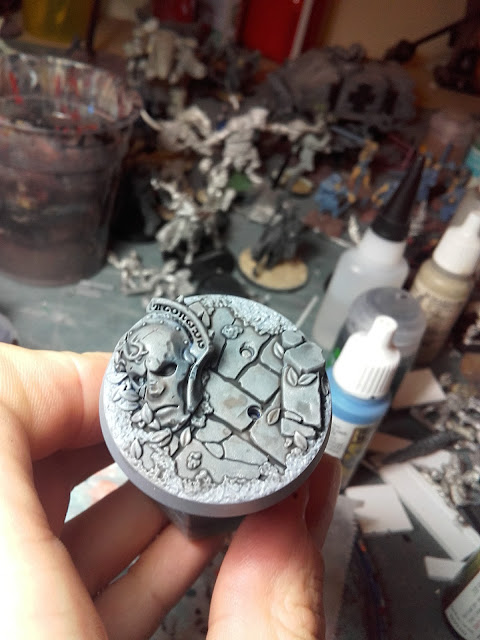 I've tried mostly all the techniques I could think of on those, ground tea, birch seeds, pigments, I wanted something autumnal to contrast with the blue hues of the models. 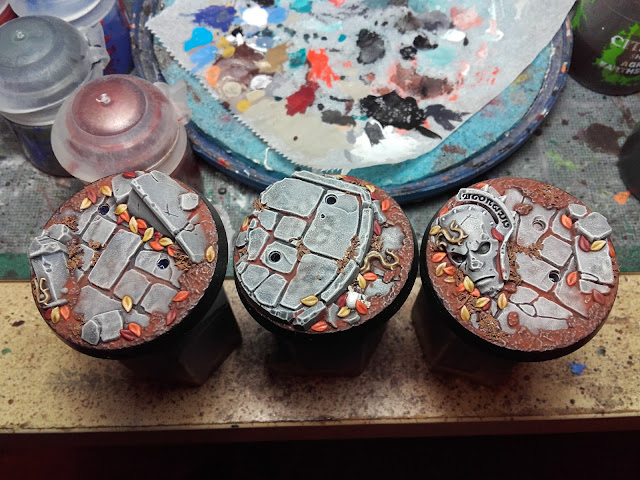 Like very often I did rush them in the end as I'm not used to spending so much time on models and I really thought they'd take no time. I know I coudln't paint a Stormcast army just like I wouldn't paint a Space marine army but I'm really glad to have those done though.

Now I had big plans for this month's painting schedule but everything has been jeopardised by the arrival of some weird fellows.