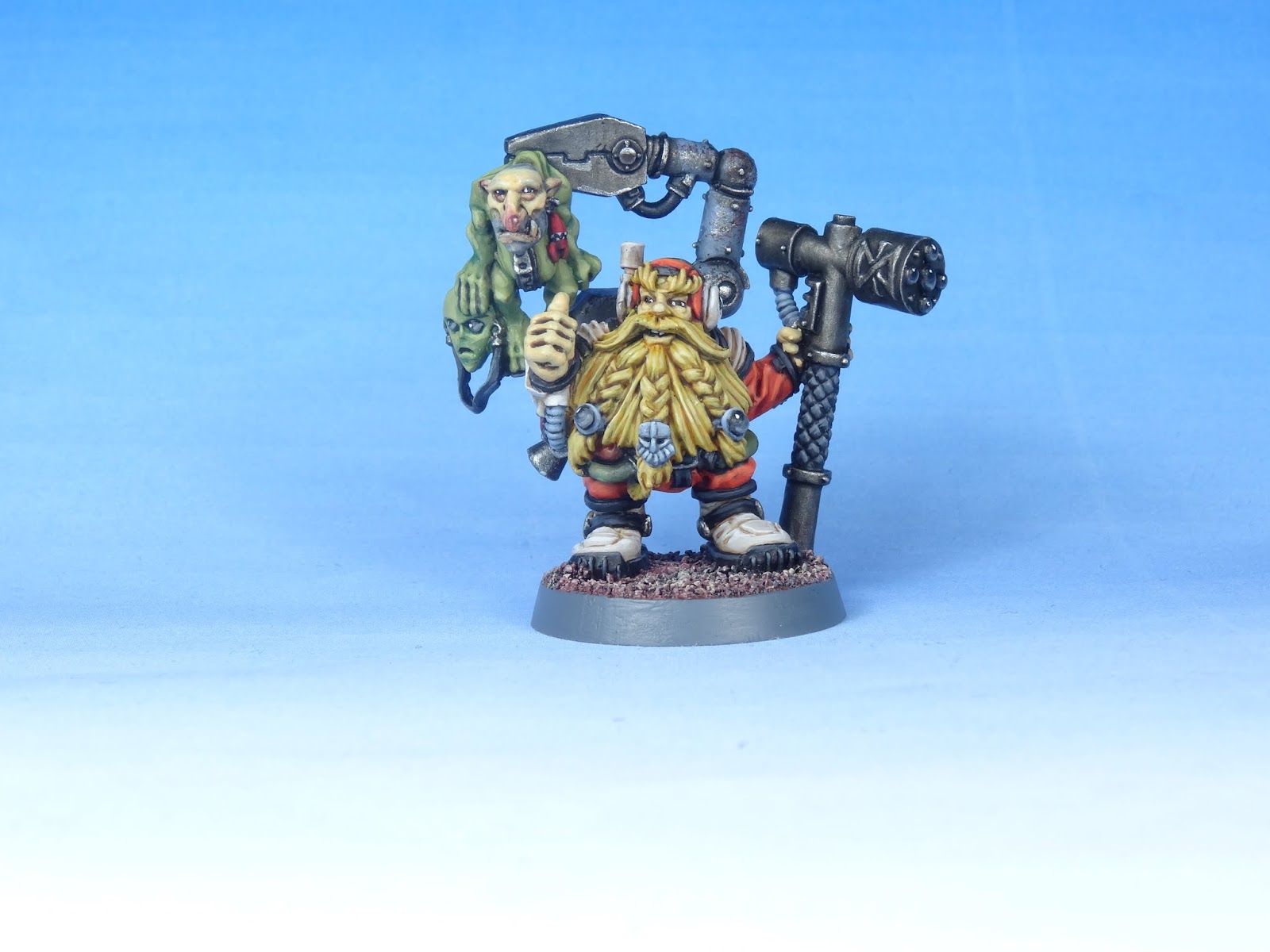 After painting some quite old references, here is a not too old model. The Space white dwarf was released in 2010 and available as a subscription gift.
My sources tell me that the sculpt is from Dave Thomas and I have to say it is one wonderful model to paint. I really had tremendous pleasure with it as it has that particular balance between detail and simple areas. It is not too full of insane details but the ones present are very fine and a treat to paint. Really a painter friendly model. Thanks Dave.

Tis really inspiring sculpt has really got me to up my game a bit and take a lite more time. You will spot some shortcuts here and there (especially in the metallics).
You also have to remember that for a time I struggled with finding what colour to paint the beard...


From the pictures above you will have noticed that I painted the goblin with human flesh instead of painting him green. Well, this is simply because as much as I respect Bryan Nelson, I have to say I prefer the older orkoid look to his take. That means if I want to have greenskins, they'll have to tie with those :

Another point was this allowed me to paint the model a little differently from all the others you've seen elsewhere which is always nice. As a joke though, I painted the alien costume green to reverse what the model is intended to be. This is a sort of abhuman wearing a green suit to pretend he's an alien. You may have spotted his earring which is a remote nod towards Tintin's rocket... 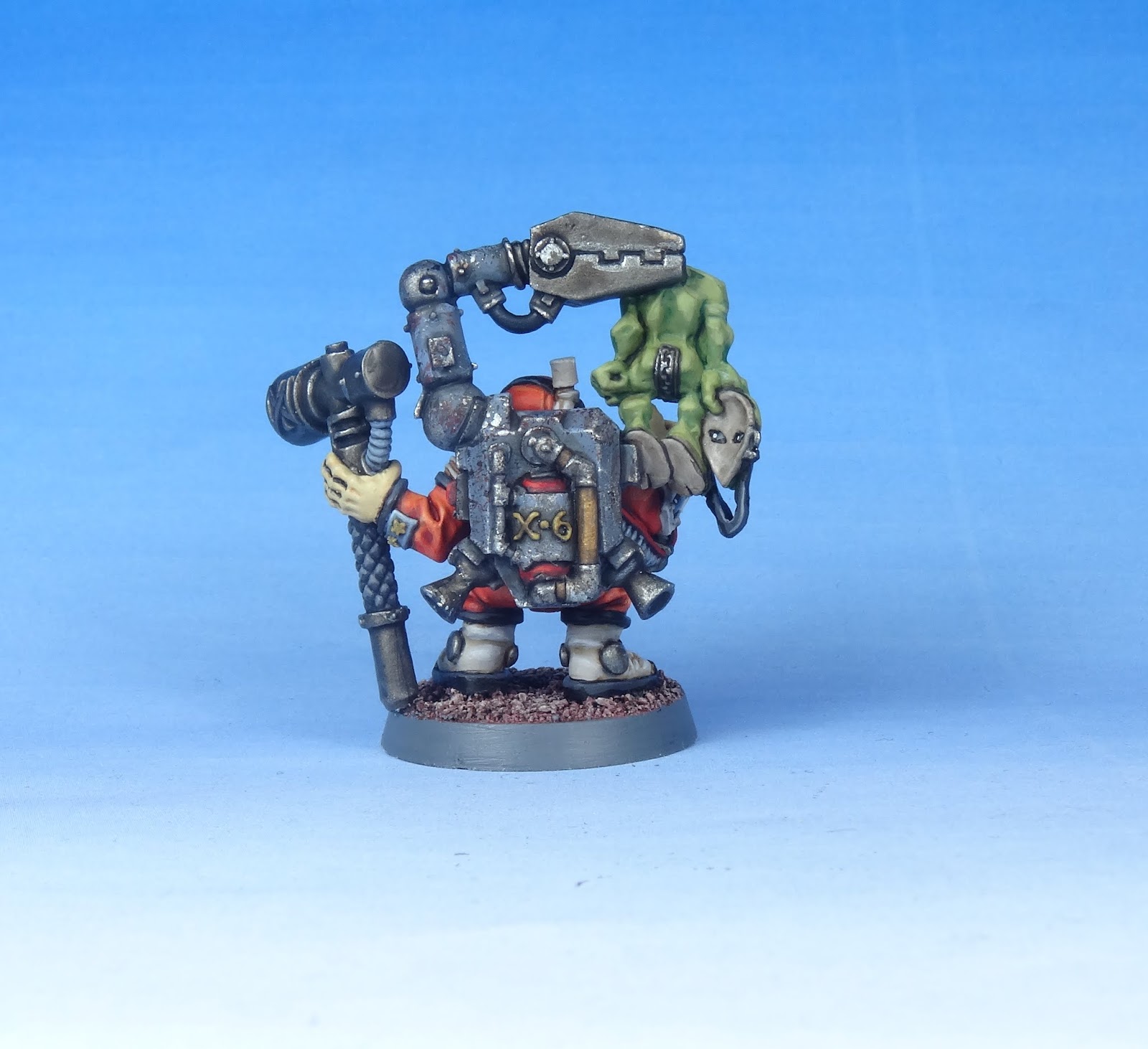 Painting wise I tried some new techniques "just to try". for the backpack, I tried weathering with a sponge, tis was done by painting the backpack neatly first : 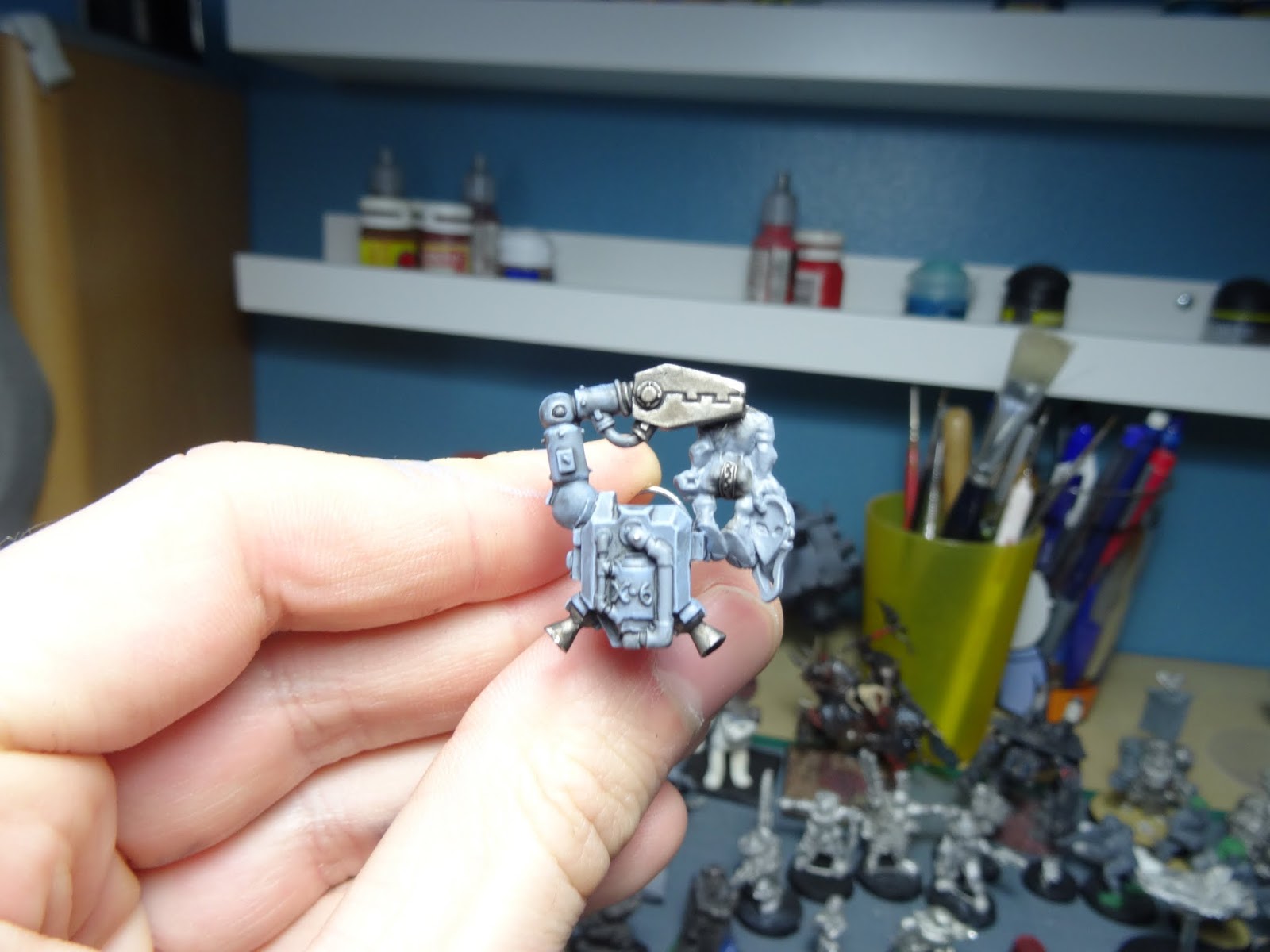 And then using blister foam dipped in black first to add random patterns of weathering. I then repeated the process with a reddish brown and then metal to reach this point : 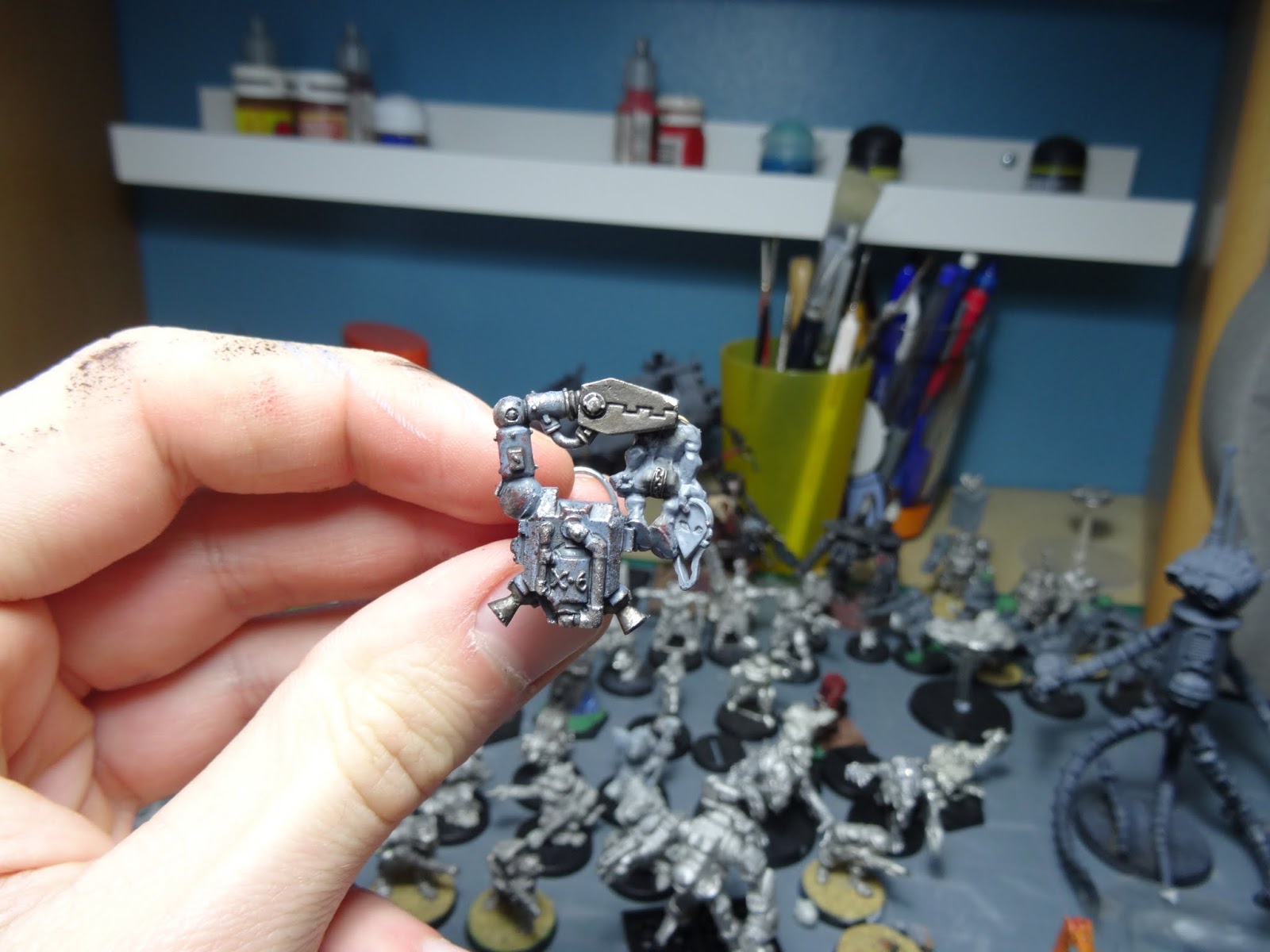 I might have overdone it a bit but at least I learnt something in the process so I fell I'll be able to put this technique to good use soon.


Toruna Ironwind is a peculiar squat in that he doesn't seek the exclusive company of his kin at all cost. One could even say that in fact, he likes to enjoy the broad horizons the universe has to offer.
Toruna was sent early in his childhood to an adeptus mechanicus formation facility to become one member of this powerful organisation. His natural skill and curiosity for technology could have make him a very influent member of the Admech cult if it wasn't for his strong thirst for adventure...
Before joining higher ranks and starting his transformation to become one with the machine god, Toruna left all that had been his life until then to travel through the galaxy and see with his own eyes the wonders of the universe.
Whenever he finds a place he enjoys, Toruna will make a workshop to use his skills to help people and earn what he needs to continue his journey, his servo-arm and powermace, remnants of is former allegiance have now found a new use.
During his journey, he has encountered Umba, an abhuman like him which has the cunning and greed Toruna's good nature lack. Umba's past is quite mysterious but offer him a pint of astro-beer and he will tell you the story of how his ogryn father "seduced" his ratling mother...
To gain quick notoriety, Toruna has often tried to use his former admech formation but few people have ever believed him... until Umba came up with the idea to disguise himself as a martian Toruna would have abducted during his period there (and natural martians are green as everyone knows). Surprisingly enough this seems to trick some people and Umba's personification seems to have mystified enough to get them far enough job so far. 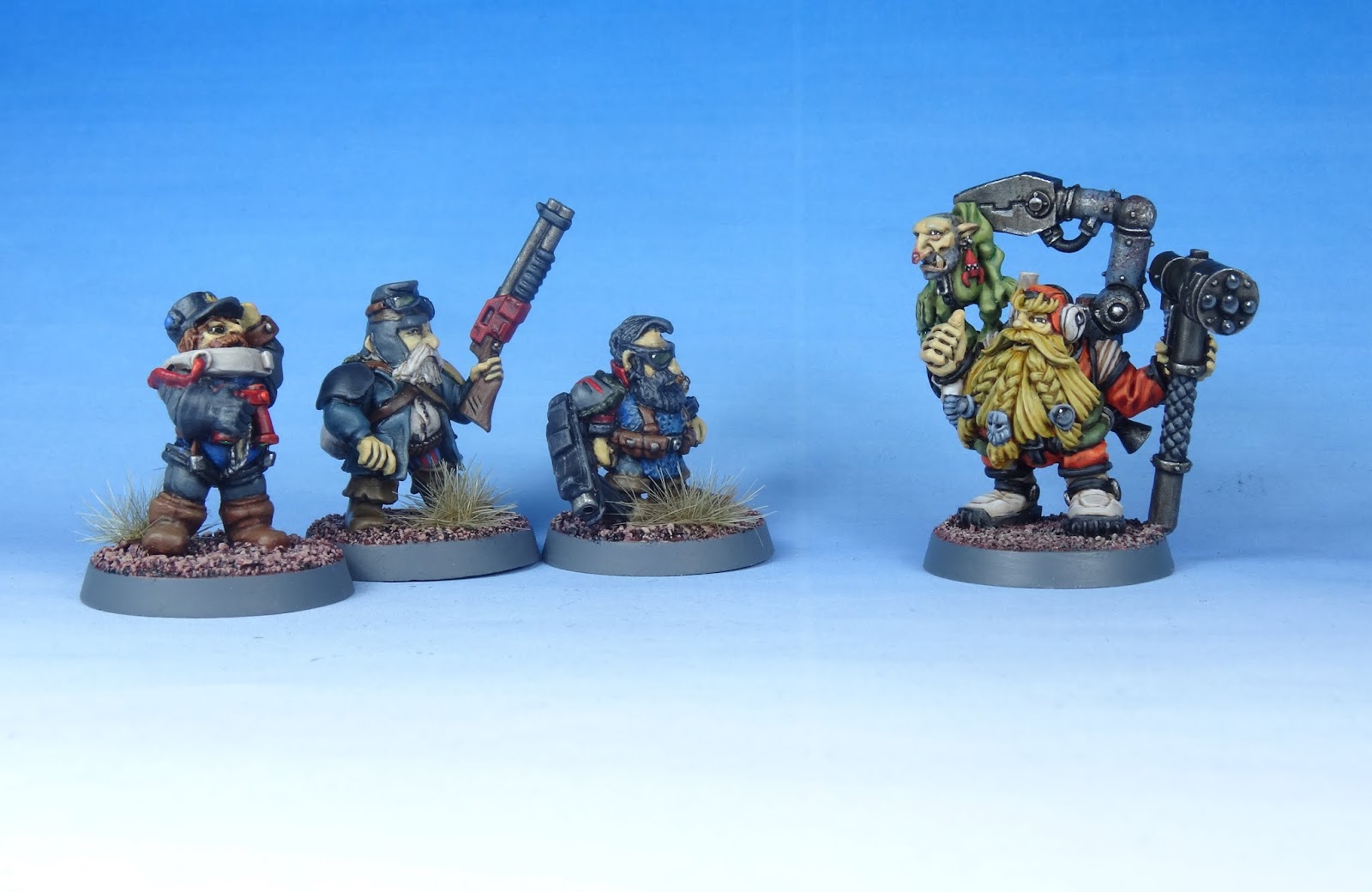 Whenever he can, he will lend a hand to fellow squats in the name of blood bonds (though Umba will make sure they pay just like any other customer).

I thought funny to have a picture of the very first space dwarf GW ever produced along the very last (to this date)...
I believe that picture alone pretty sums it all doesn't it ? They're both great models anyway and now I'm quite reluctant to varnish the newer, fearing it has to suffer from varnishing issues like his older counterpart. 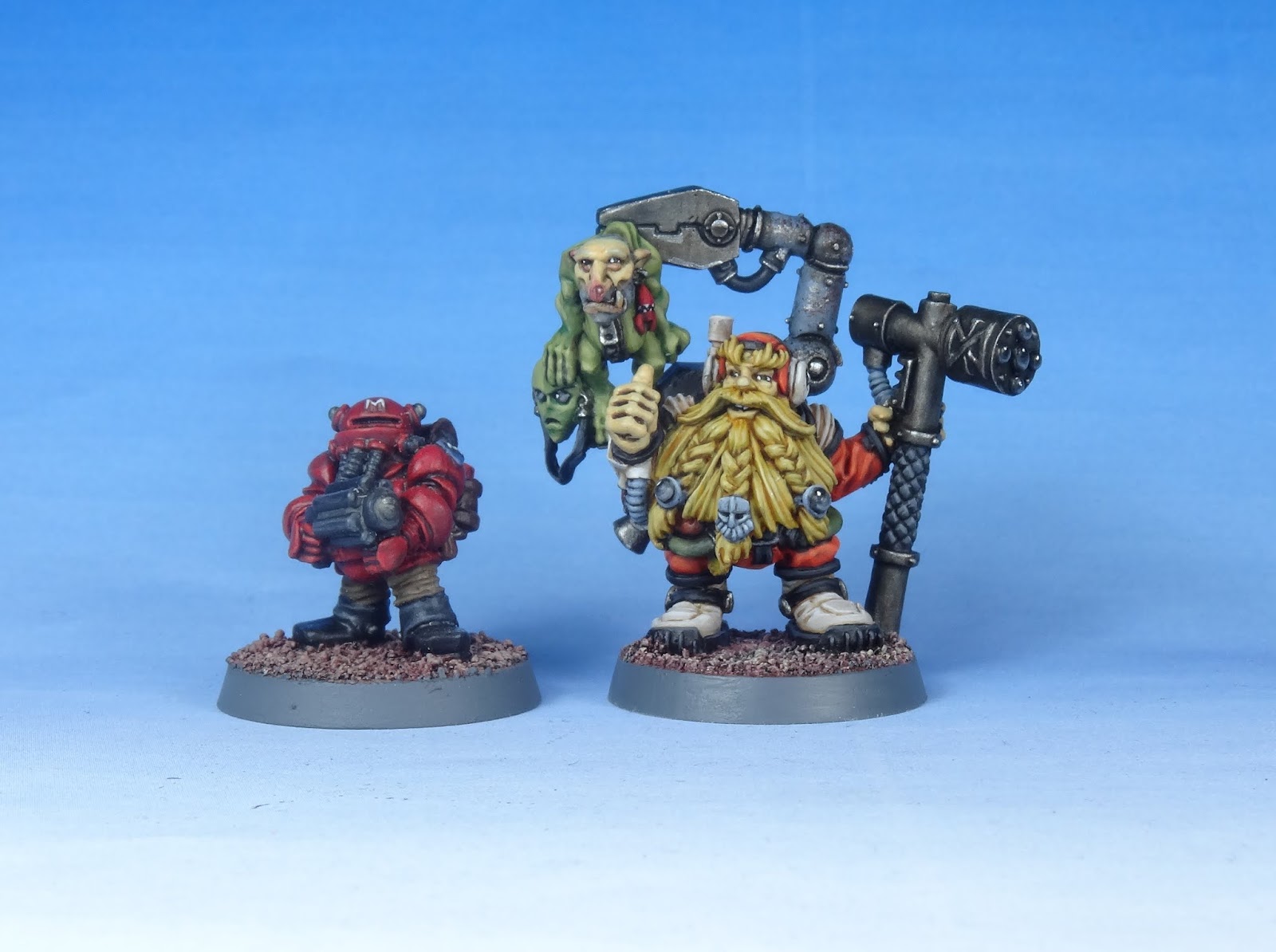 In the coming weeks, what will we see in those pages ? Like always, I'm not really sure, some old stuff for sure (old habits die hard) but some more recent too and many unexpected like often.
Publié par Asslessman