OK, you may remember from this post I engaged myself in a little challenge over the oldhammer forum.

The aim being to collect, model and paint a warband designed by another contestant.

The war band I was assigned (designed by Mr Phreed) was this one :

I won't go into the model selection since I already covered that part in the first post but I can explain a bit my strategy to paint this band.
I wanted to avoid the traditionnal use of purples, pinks and vivid colors. You will understand in the background story I built I needed noble colours and the other important point for me was to limit the palette to gain as much time as possible (since we had a month and a half to finish this challenge). I opted for dark red, black and bone colours because they go together well and suit my needs in terms of background.
I believe cultists in the cities tend to avoid displaying big Slaanesh symbols or signs which could betray them so the colourscheme seemed right, this is a reason why I opted for a more original path.

Being a Slaanesh warband, the idea to make it centered around the perverted pleasures was an obvious choice but I wanted to go further than that. The easy way to go with Slaanesh is to paint in bright and vivid colours and to show a couple of bare breasts.

I wanted my band to be centered around the quest for pleasure but I wanted it to be really evil. I wanted a band you don't want to sympathise with.

I remembered a book written by the "Marquis de Sade" while he was jailed in the Bastille (from which he was freed during french revolution) called "the 120 days of Sodom"
The text, written during his detention in very small script on a tiny roll of paper was lost during the revolution (which drove its author mad) and was only found less than a century ago.

Let's be clear about it, the purpose of the book is to list all the possible perversions and horrors a human being can do to get pleasure. It is the work of someone emprisoned, mad and I would not recommend reading it to any sane person...

That said, I've decided to build my band around this concept so the leader of the band is an old noble , the Duke of Blangis who was forced to exile because his passion for perversion and crime had been revealed to the authorities by a rival.

Years of occult ceremonies have helped the duke gain some magic powers (he is a level 15 wizard). His exile has forced him to rely on magic even more and it has not been without consequences for his body. His devotion for Slaanesh has granted him power and some followers but also some disadvantages like reduced legs (short legs mutation) and as a mark of Irony towards a man who used to charm others with his look and his words, he was given a distorted face from which every word comes out as a spit of acid (Acid spit mutation) in an intelligible way (silly voice).
Seeing these as a test from his patron, the Duke used all his will to take revenge from those who had thrown him in hell... (willpower increase).

Painting wise, I tried to show a form of decay in the Duke's look to show his former glory.  I painted him fancy striped paints (the kind you get in the Empire) and I designed a twisted S symbol with 6 dots to show his allegiance without being too much obvious (I think he got the habit to not display any sign of cult). the symbol is repeated on lots of the other models.

The crooked pose and the autumn leaves on the staff are here as a reminder of the Duke's own decay. 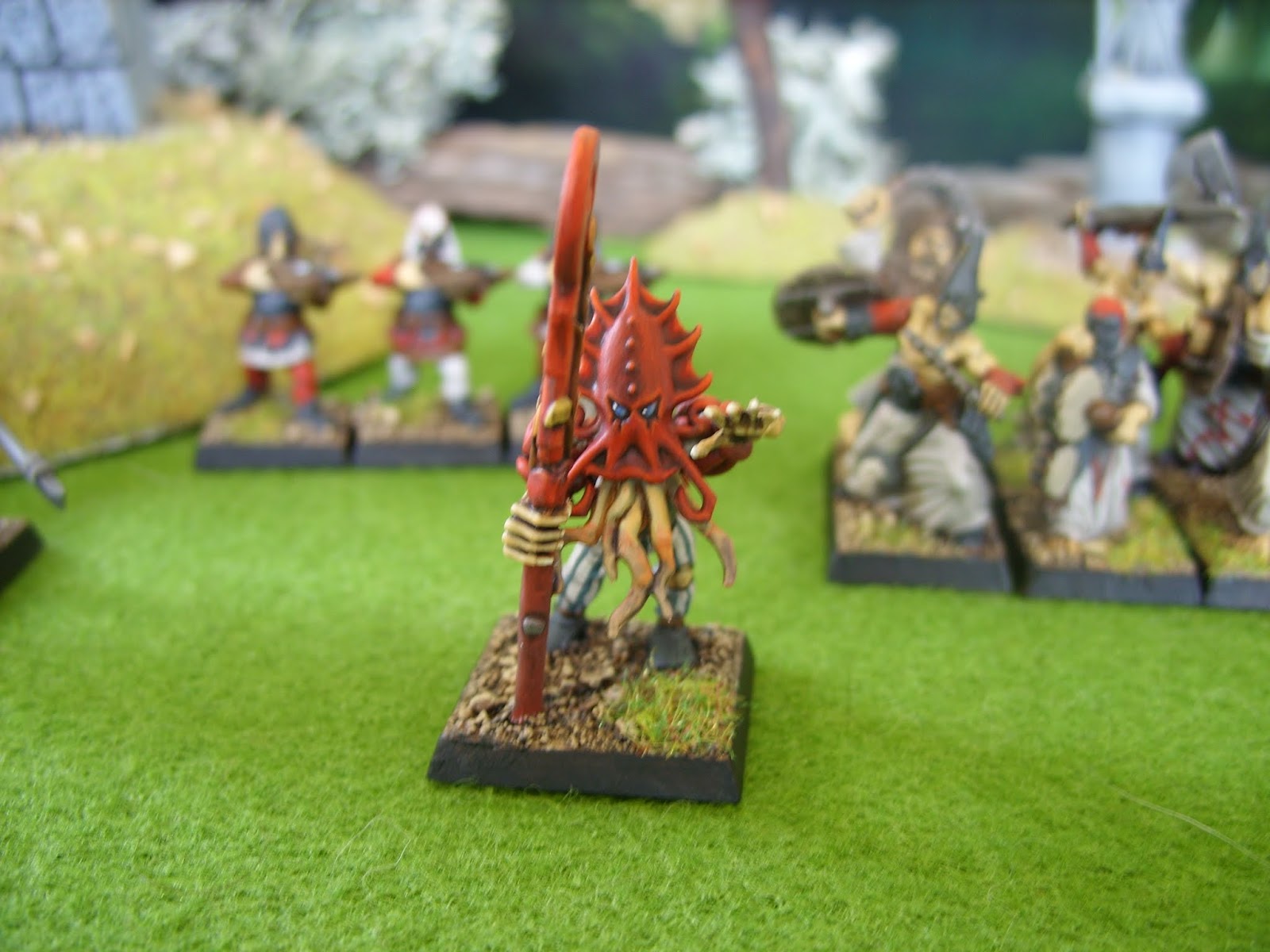 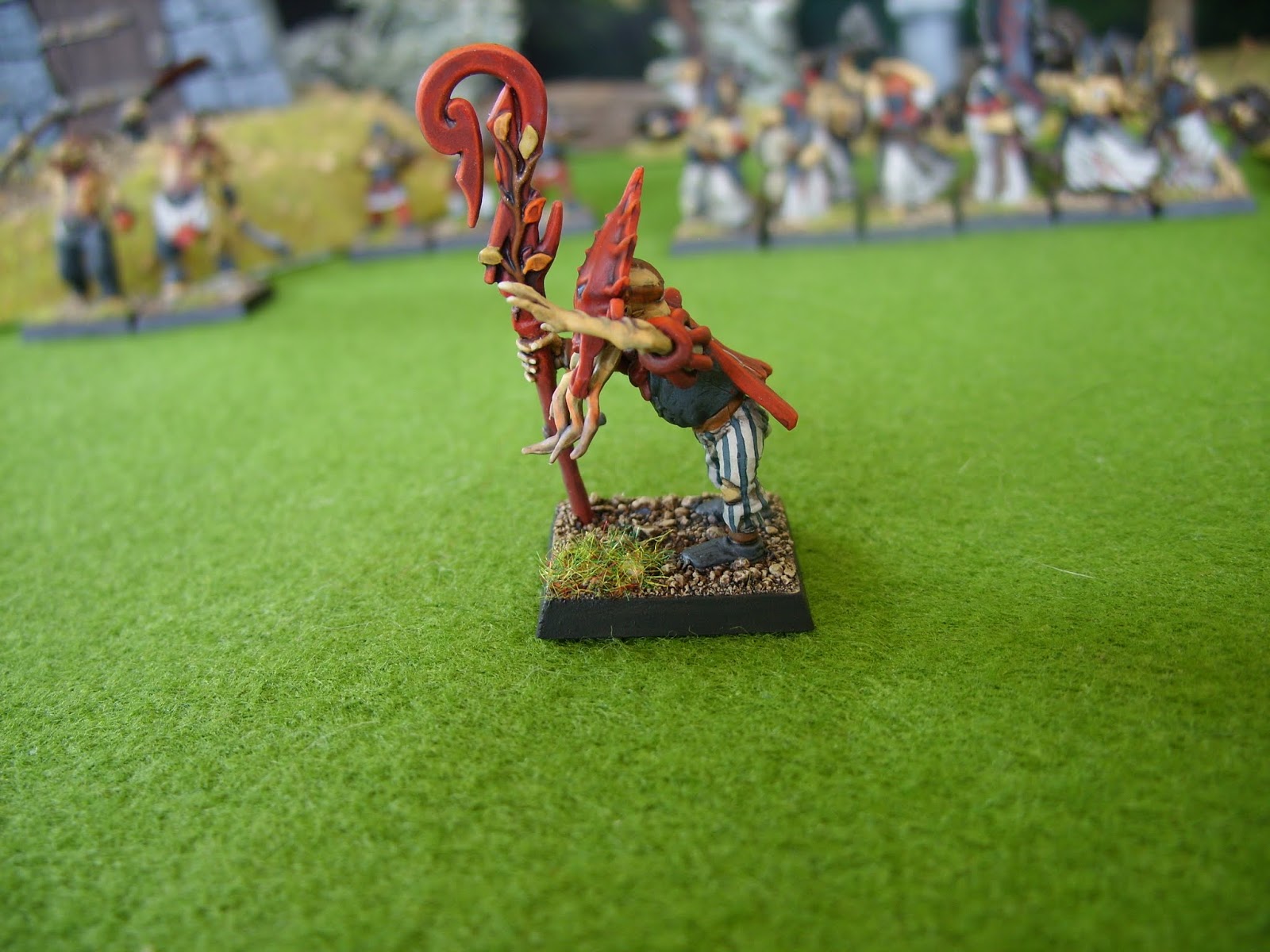 The duke left with very little and amongst the things he could take with him were 3 young dark elves. These elves had been abducted by the Duke when he was at the zenith of his might. He has used a considerable amount of time energy and power and drugs to forge these youths into loyal and obedient servitors. They serve him as bodyguards, assassins and slaves for some of his darker needs... 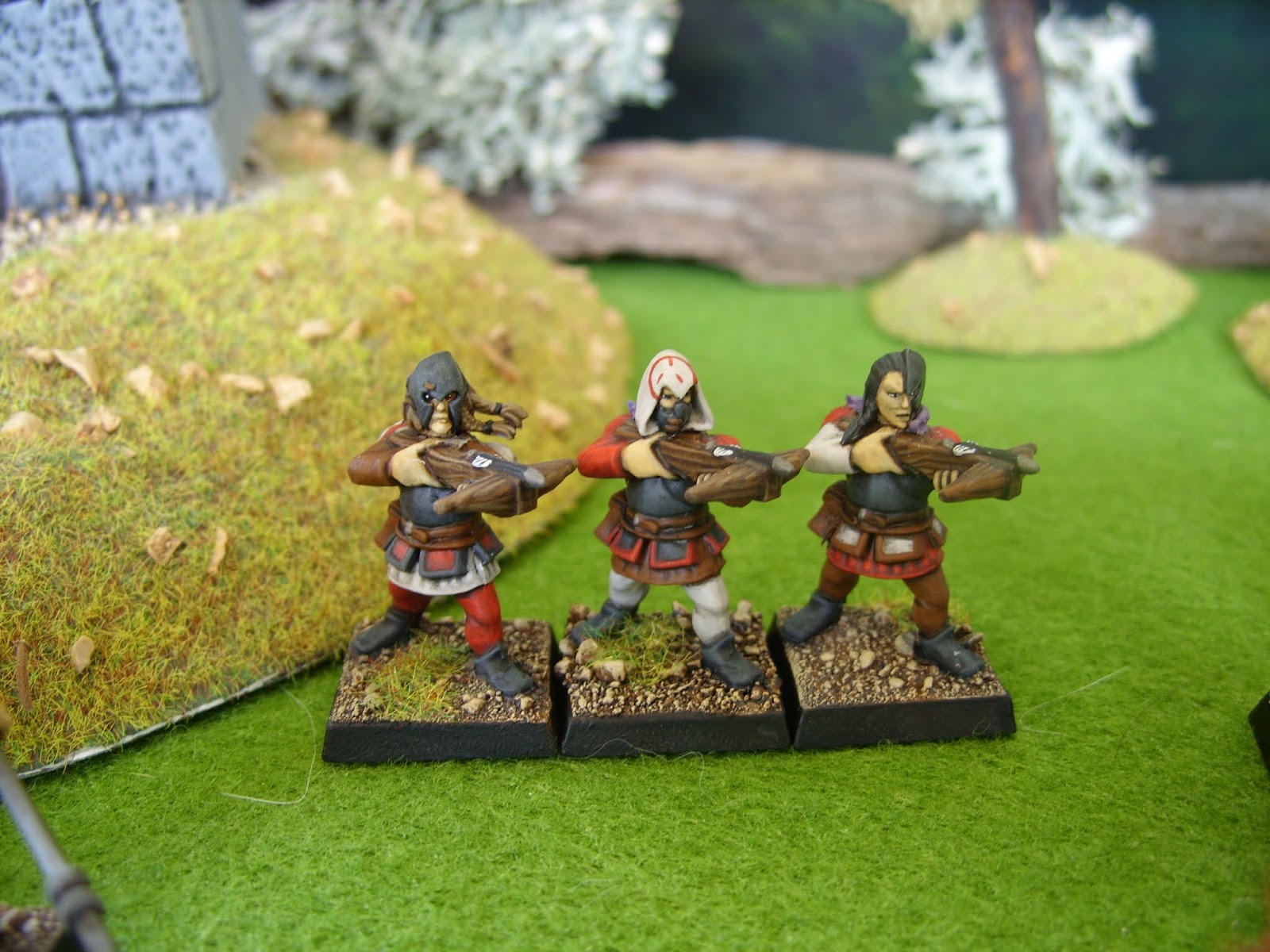 The duke left with little but his talent for magic and his knowledge of human mentality were still intact. He quickly formed a small cult around him to help him in the ceremonies and to protect him in his exile. In battle they go in a unit of 12 (2x6 as a token to Slaanesh). 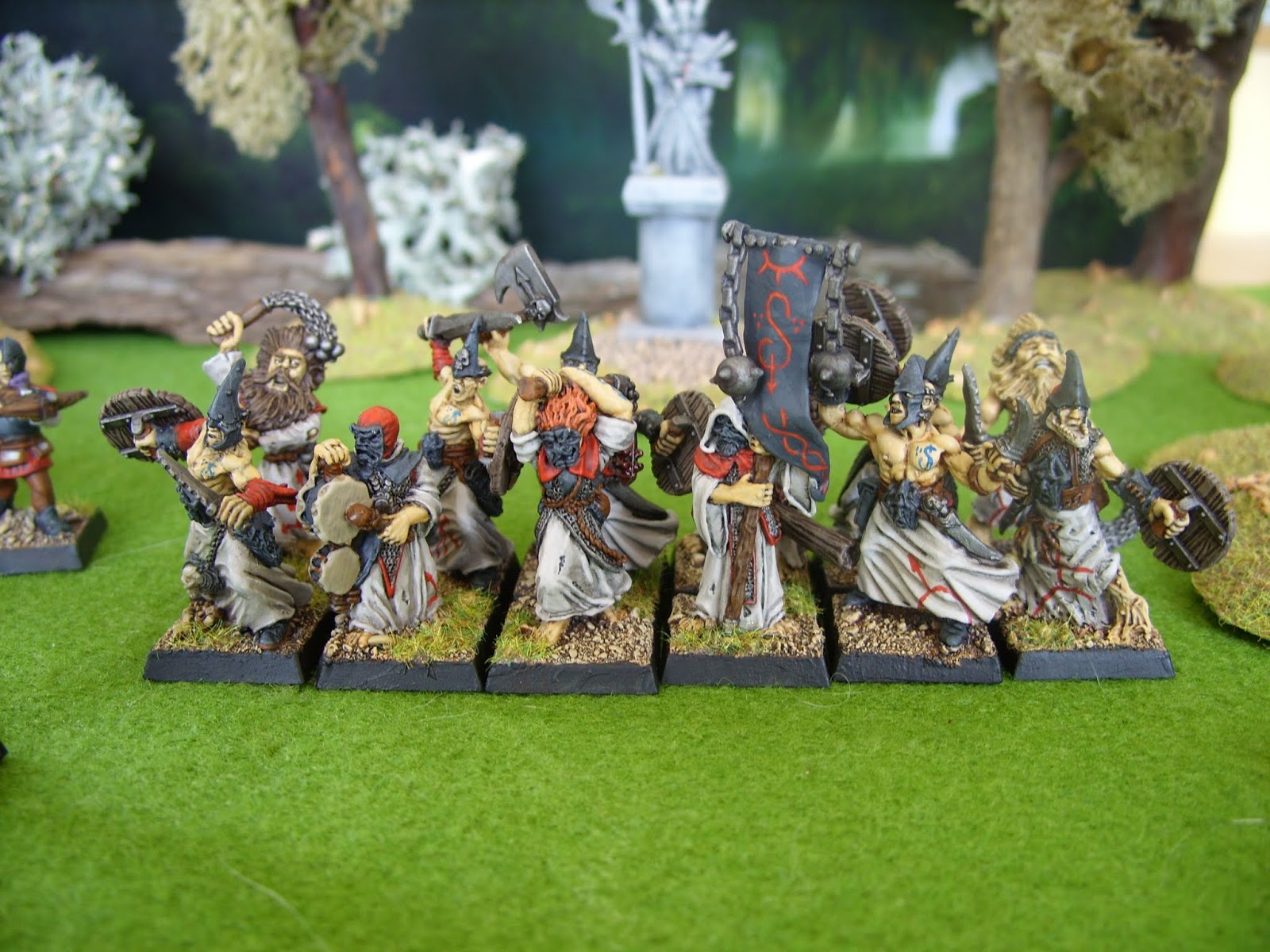 Amongst those cultists, the chief priests are here to command the others, to organise the ceremonies, perform all the rituals... They wear masks to hide the extent of their perversion but their sinister laughters leave absolutely no doubt about the blackness of their hearts.

The zealots are crazy and worship the duke as much as they worship Slaanesh... they record every action of their master in unholy tomes and profess them as a divine parole.

The servants are the most numerous of the duke's retinue. They are the ones who accomplish every sinister action for their master : robbing, killing, pillaging and worse... their soul is sold to the Duke's will and they are always the ones with the most blood on their hands. (they usually go in groups of 6 to gan favours from Slaanesh)


Life in exile has also brought a new form of power to the Duke in the form of 2 minotaurs, those goat-faced minotaurs have been expelled from their former tribe because of their look and because their manners tended to be slightly less brutal and somehow more perverse than those of their kin.

Their presence aside the Duke is no surprise and when these 2 monsters join the ceremonies, victims can only pray for a quick end... 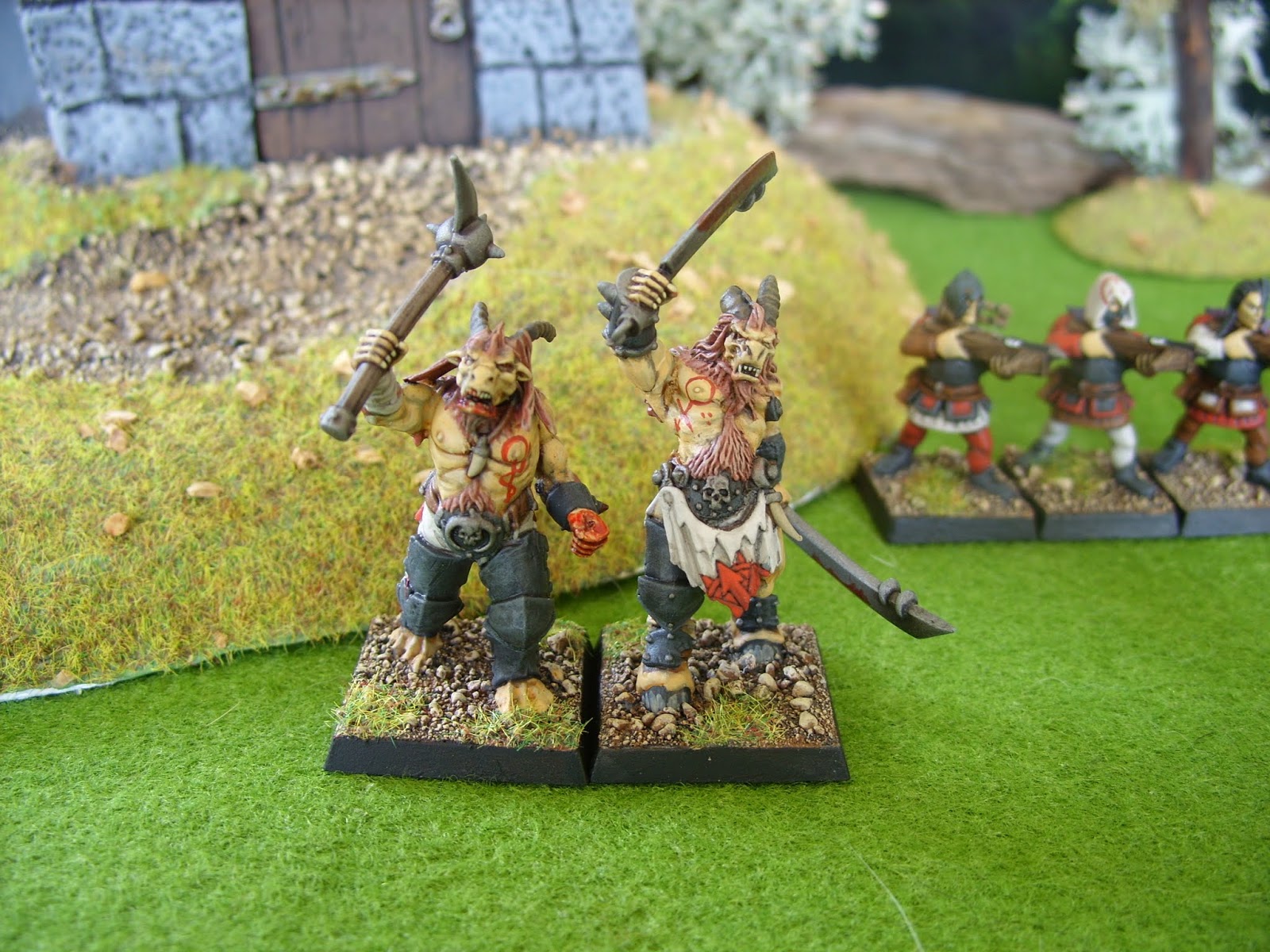 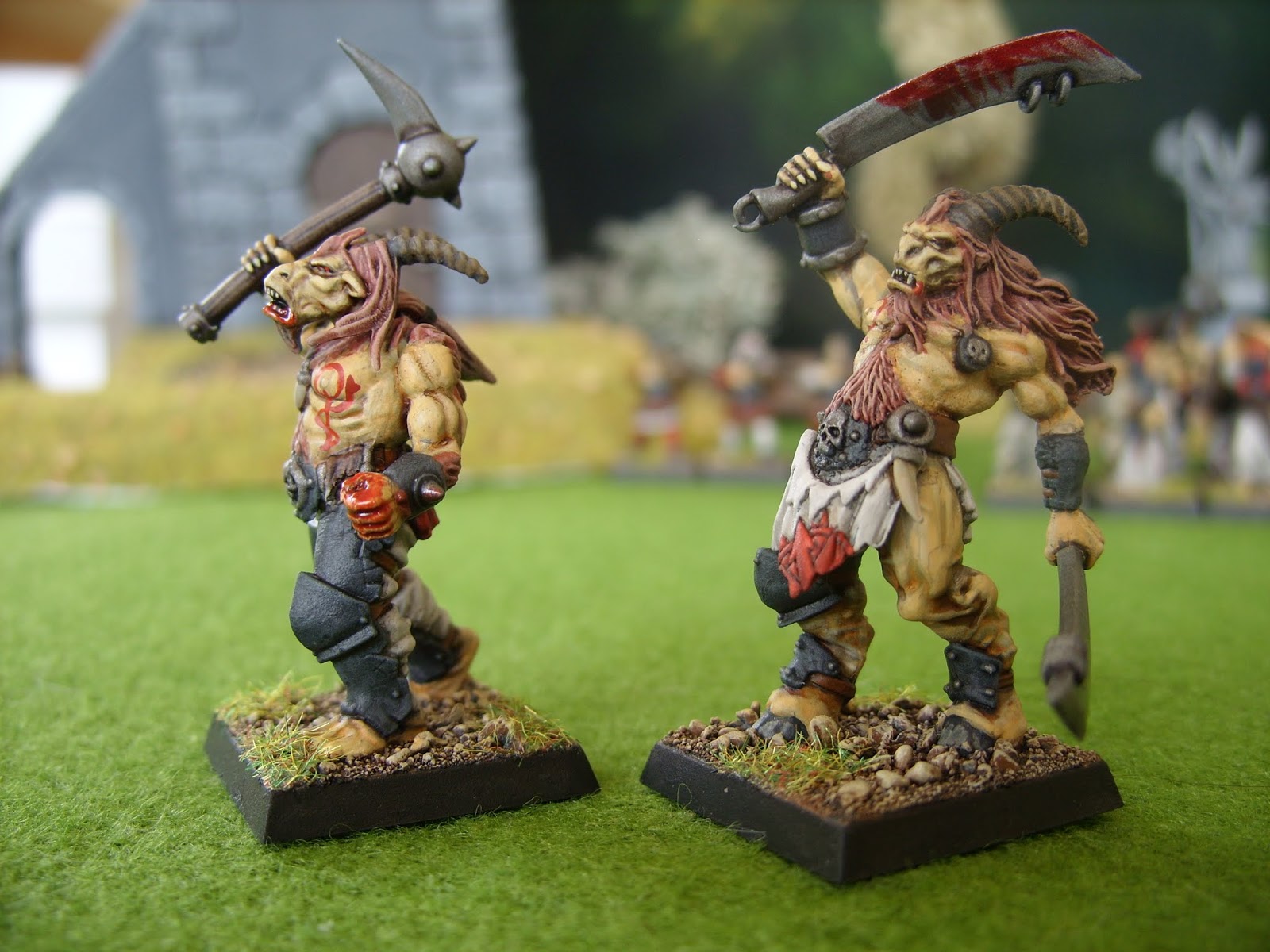 So here it is, the warband which has taken most of my time since mid-March (even though I managed to work on a coupe of side projects in the meantime). Now I can go on with more easy work. I have some regrets with this band because I have not spent enough time on the preparation of the models (hence some mouldlines you can see here and there) and I had to work with very straightforward methods without too much refinement. The very good thing is that in less than 2 months I have painted 18 models to a reasonable tabletop standard which is always good to play little wraband games with friends and that I 've actually learnt how to speed up some processes. It's also somethoing I would have never done otherwise so I thank the organiser of this challenge.

If you want to see what the other contestants have done you can see them HERE and why not vote for your favourite !

Now I'm looking forward to paint a bit more freely before engaging again in army painting and finishing some of my confrontation bands.