OK, with all the latest sexual confusion of last Week-end, I managed to get the finishing touches on the Sensei Master for my Sensei warband. This time you can be sure he is a man and has been so for a few centuries and even some millenia (no more phoenix non -sense ^^).

I've already covered a bit of the history and concepts of Sensei in a previous post so today I'm going to focus mainly on the leader of the band.

Let me present you Lucas Stern, my sensei master, leader of the sensei band that will arise in the coming weeks.

This is actually the second time I've painted this model. First time must have been in 1997 or something and I remember I did not enjoy painting him much at the time. It's why he has spent quite some time in a box of unloved half-painted lead until I rediscovered him a few months back and decided a good Acetone bath and some fresh eyes could probably do him good. 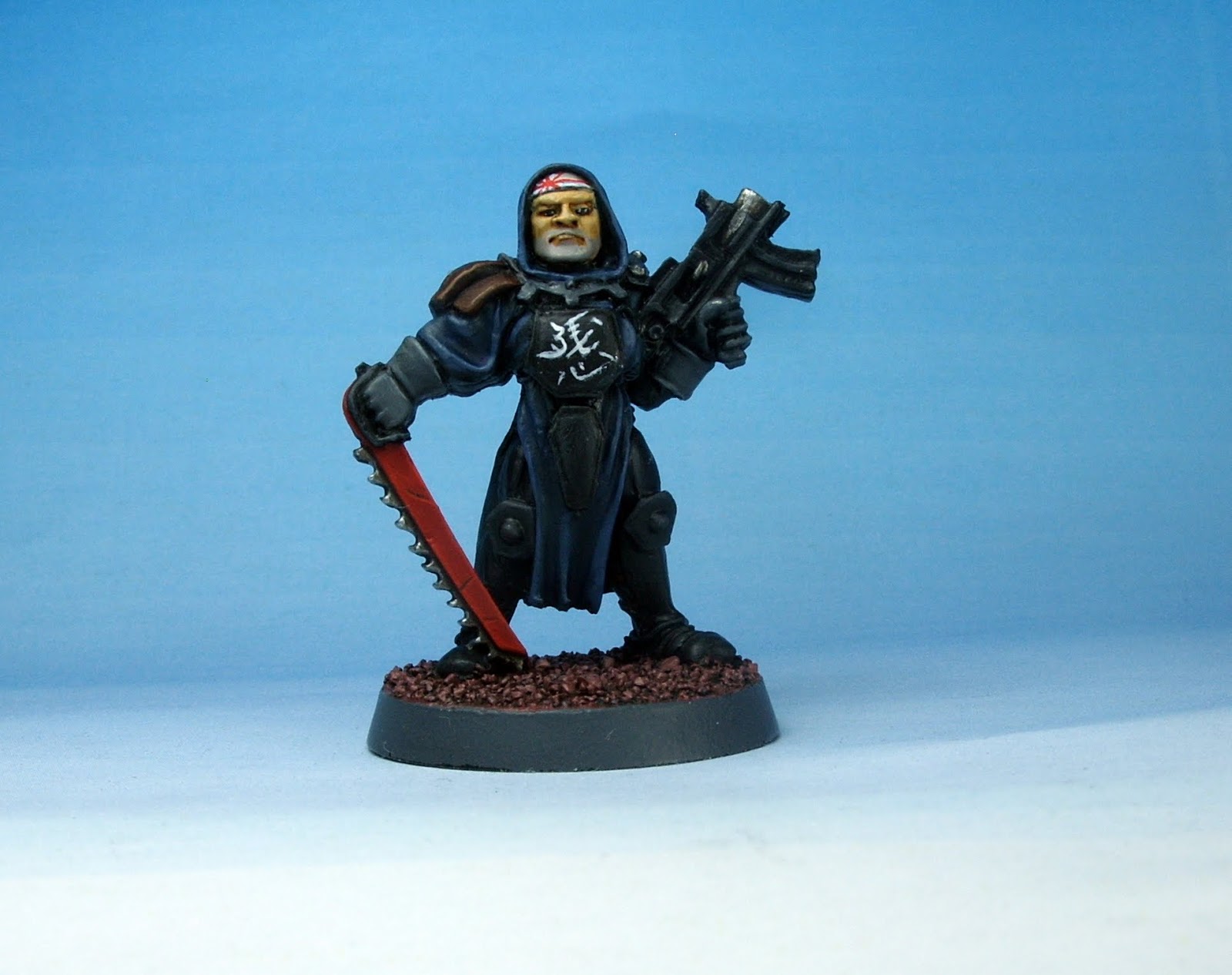 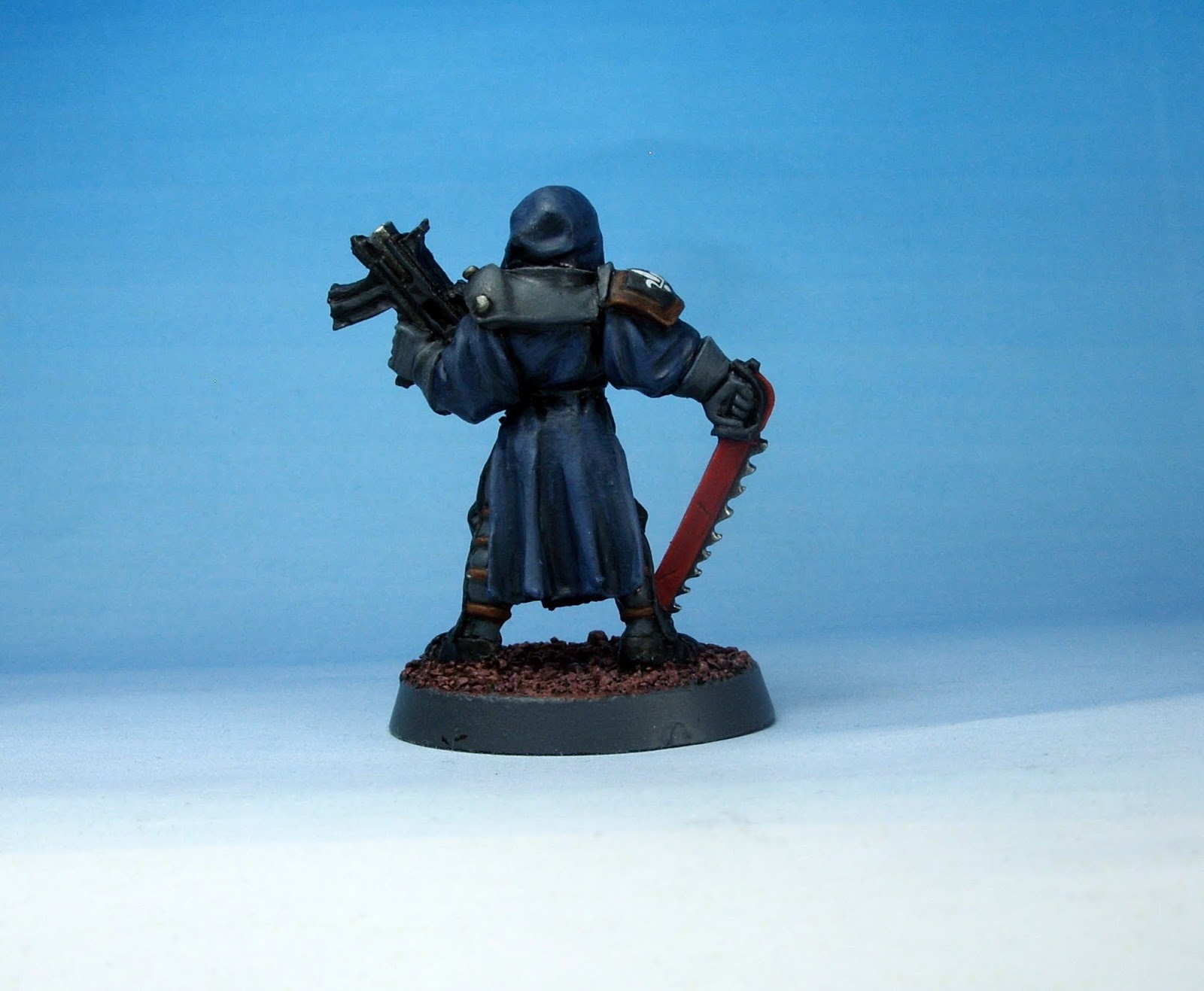 My main inspirations for this model were taken from this illustration (coming from the Slaves to Darkness tome) : 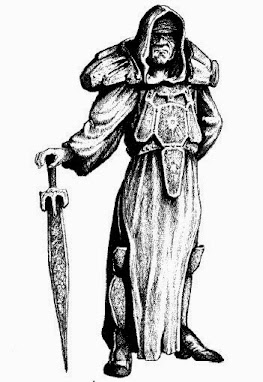 And as explained in my previous post, by the Japanese martial art of Kendo which I happen to practice. The real funny thing is that the first time I painted this model it was already with blues and greys just like it is now because for me that's the way Sensei have got to be painted (don't ask me why, I have seriously no clue).

Anyway, this time the choice of colours is justified by the feeling I wanted to give to the model.

The name sensei itself is a japanese word meaning "teacher" or which represents someone who has authority over you in a special field. The description of Sensei as very straight and honorable people in the Realm of Chaos books added to the japanese origin of the name immediately rang the Samourai bell for me and especially the Kendo one.

The picture below explains the different parts of a typical Kendo armour (in Japanese fencing, cuts and thrusts touch so you definitely want some protection to avoid broken limbs and cracked skulls). 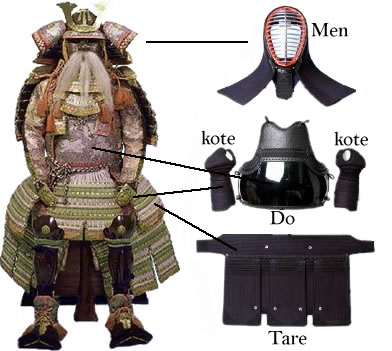 Note that all the parts can somehow be found on the original drawing and on the model even if in altered versions. I have serisouly no clue as to wether this was some real inspiration or not but I couldn't let that resemblance unused for my project.
Both drawing and model display some form of blade which is the essence of Kendo (literally meaning "the way of the sword").

So the blue/grey/black colourscheme fitted both my ways of seeing sensei and the colours used in Kendo.
I opted for a red chainsword to offer some contrast. The colours are volontarily not very bright because I beleive such a character has managed to survive for centuries by staying low-profile in the shadows and this model served as a basis for the rest of the band in terms of colour combinations. The poor "readability" of it made me work the blues twice until I got the result I was looking for.

I kept a nice armour and clothing and decided to add battle damage on the chainsword (don't know if that shows well on the pictures). 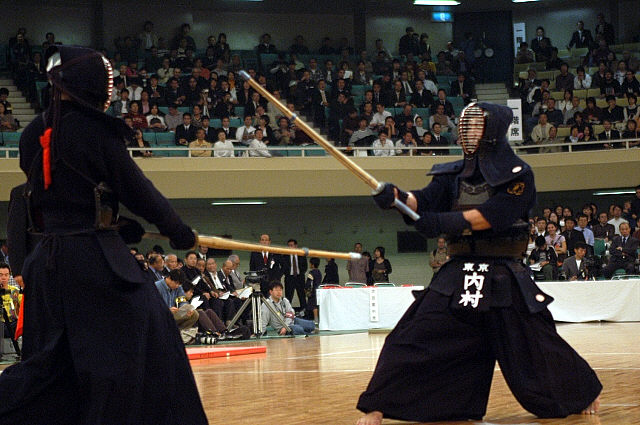 Some of you may have heard about Musashi Myamoto, a great swordsman and ronin renowned for his swordmanship and being the autjor of the Go rin no sho. 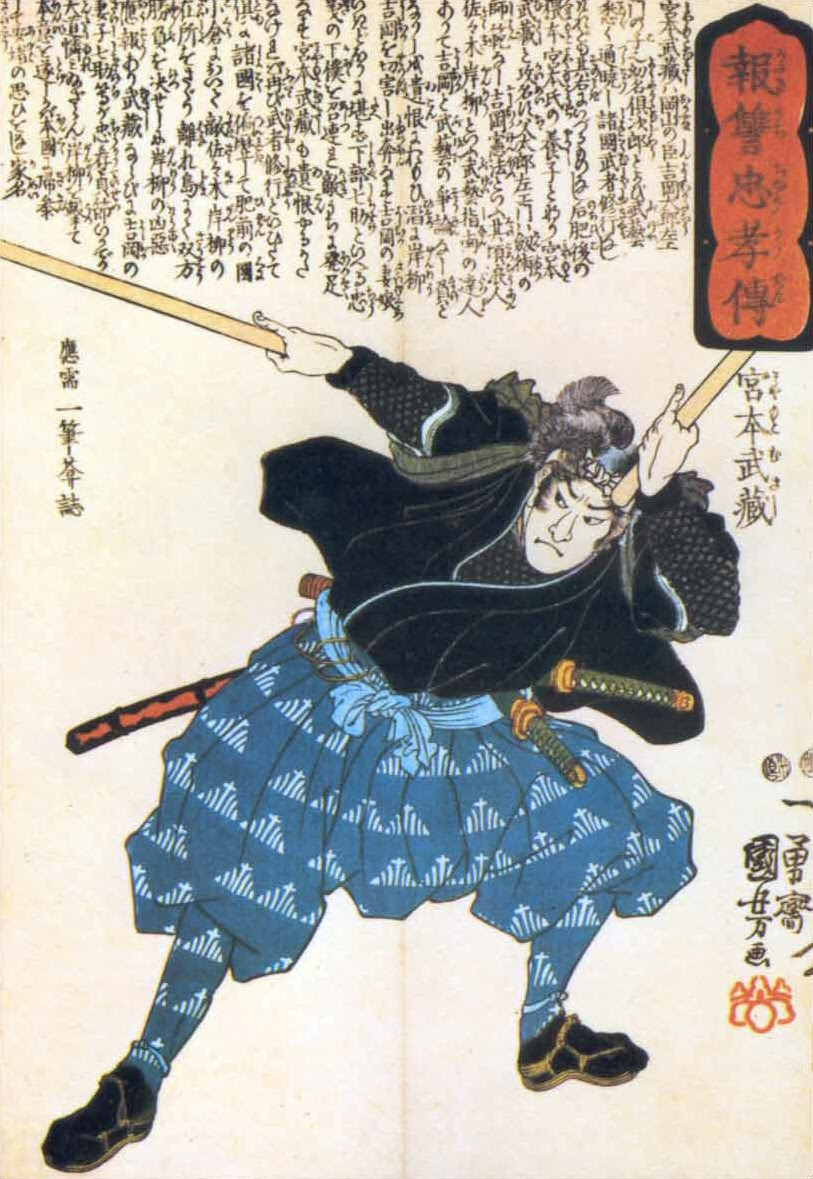 Well I wanted to use some of the philosophy behind this art to give my sensei some more depth and I decided to opt for the principle of Zanshin.

Zanshin (Japanese: 残心) is a term used in the Japanese martial arts. It refers to a state of awareness – of relaxed alertness. The literal translation of zanshin is "remaining mind"
zanshin is the continued state of spirit, mental alertness and physical readiness to meet the situation 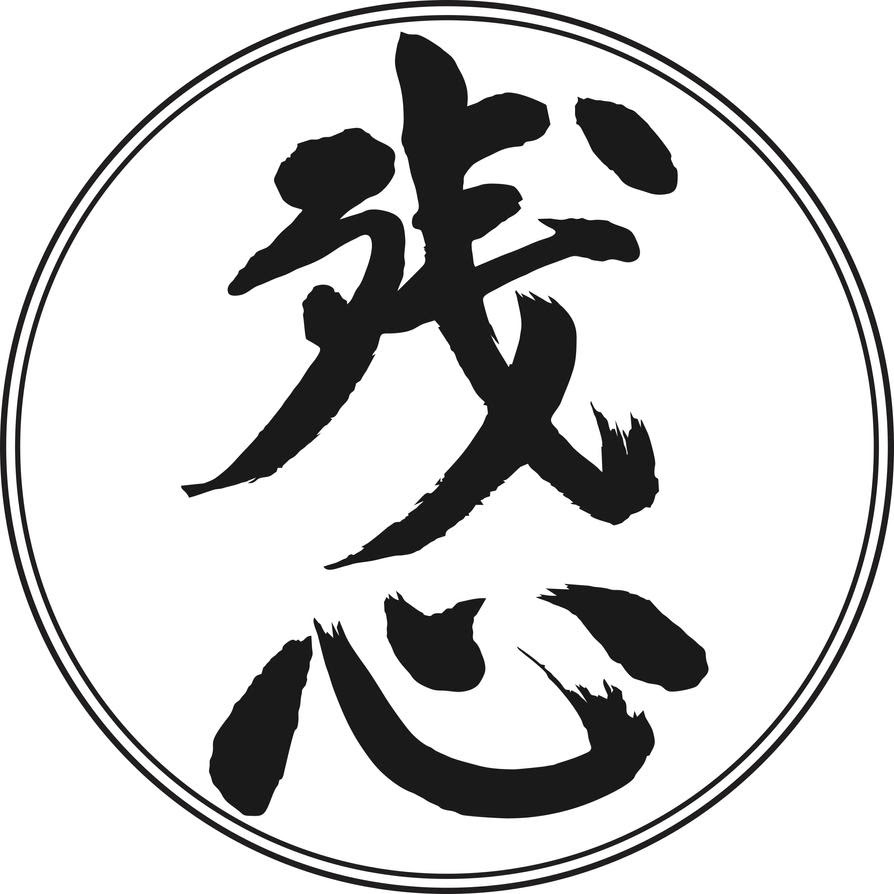 This principle is very important in the practice of Kendo but also in many martial arts coming form the Bushido and it can even be applied to arts. Permanent awareness and readiness is really how I portray sensei. Centuries and even millenia of training, surviving and thinking must have led to someting better than just a bunch of careless heroes.
I chose this concept because it embodies honour, respect, skill and experience. I realy see Sensei as the paladins of Rogue trader, with immortailty as little bonus.

I hope Japanese people or people who practice martial arts won't be offended by my poor freehand skills and attempt at calligraphy.
I actually tried to paint the Kanji (symbol) like I would have done with a big brush on a big sheet of white paper, trying to write the whole Kanji in one motion (actually 3 to reload the brush) in order to keep a good Zanshin while doing so (if you follow me).

From now on, I'll add a picture of the band growing little by little so here is Lucas Stern with his loyal ratling cook, ready to go explore the universe and serve the Starchild and help those who need hope. 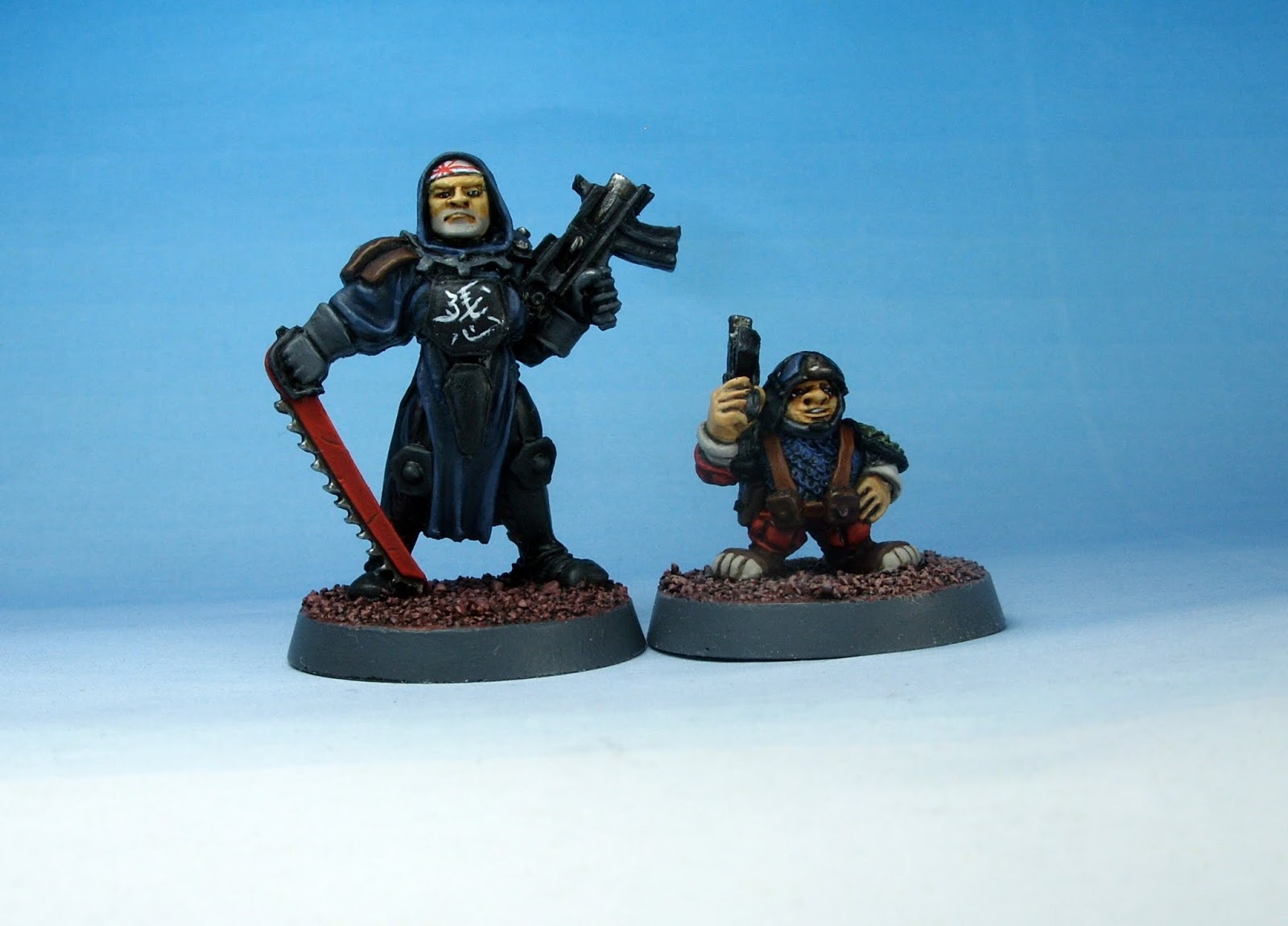 As far as Background is concerned, the Sensei leader will stay a bit misterious until his troops gather around him, for now, all I can say is that he's been serving th eStarchild cause for a very long time and that his time to come to light has come...

I don't know what other follower I'm going to do next but he should be ready soon (meaning before the end of the week).
Publié par Asslessman