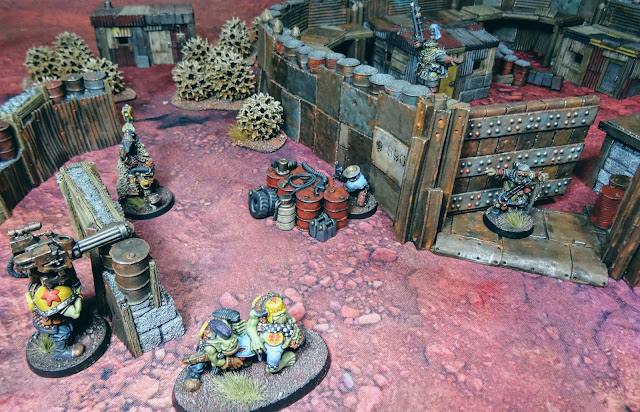 OK so I've been pretty quiet for some time now, several factors  could explain that but one of them was that I've been slowly bt steadily working on a lot of scenery for Fogou Models' upcoming kickstarter !
I had the chance to paint their former kickstarter last year so I was pretty chuffed to get to work on this new one !
This one is considerably more ambitious with a whole post-apoc fort ! 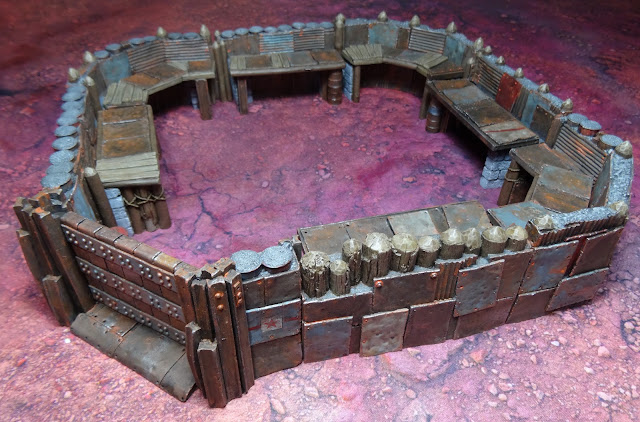 For starters, just take a look at the magnificent painting from Doti (from Katsina Miniatures) which sets the mood for the project ! 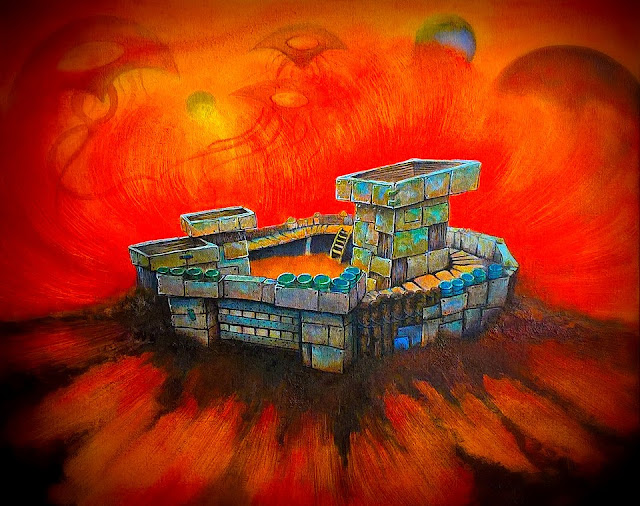 The pieces shown below are some of those that will be in the kickstarter but there's more and many variants !

The first piece here is the entry gate, this is the prototype version but the final one will be in the same mood. I really like that it's fully functionnal with the gate hinge being cleverly incorporated in the side pillar, allowing to remove the gate entirely and to open or close it. This is one of Fogou's main characteristics : the attention to details and clever design. 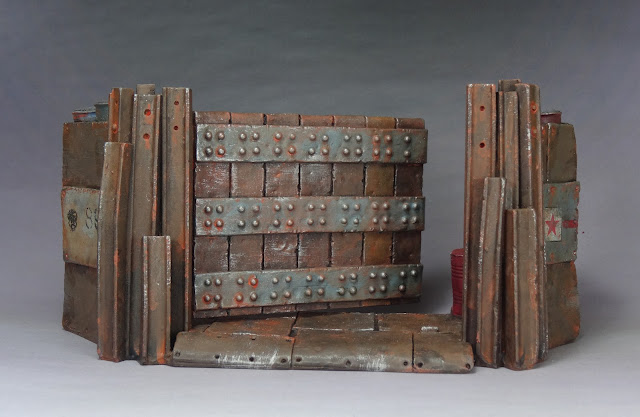 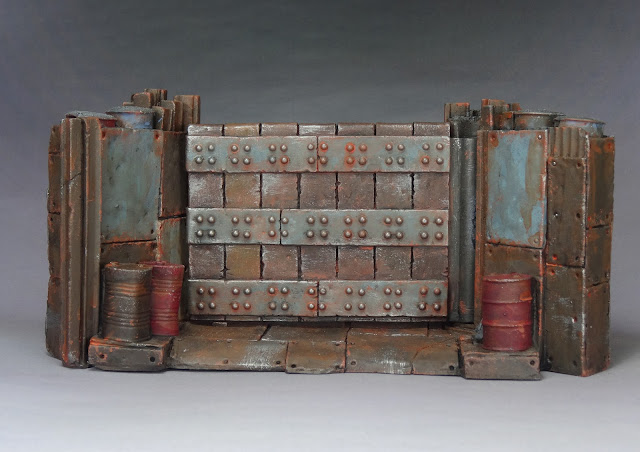 Then we have 3 corner modules (there might be more variants) : 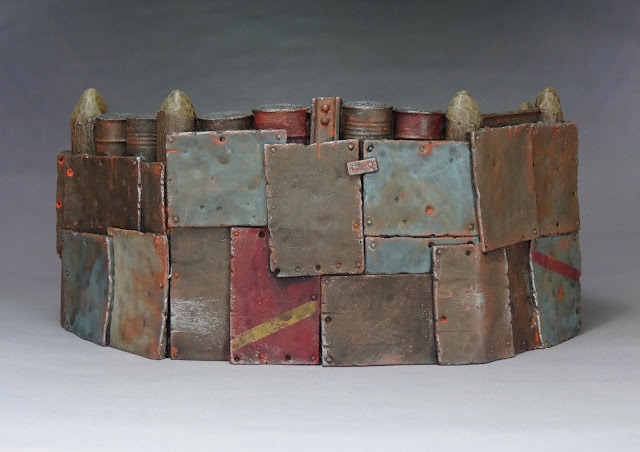 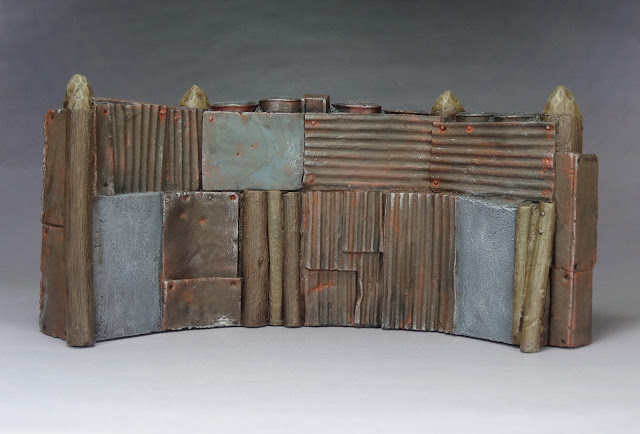 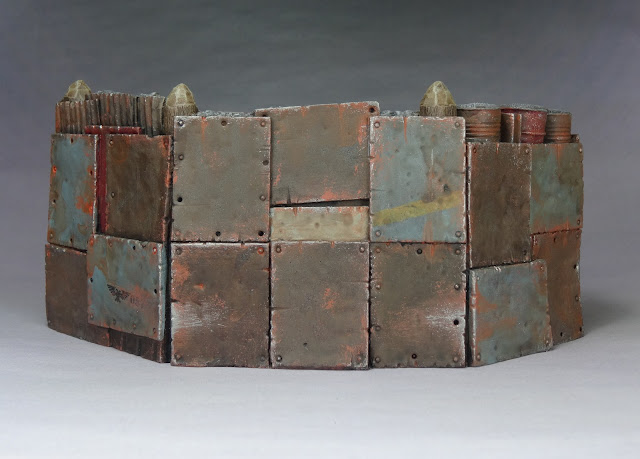 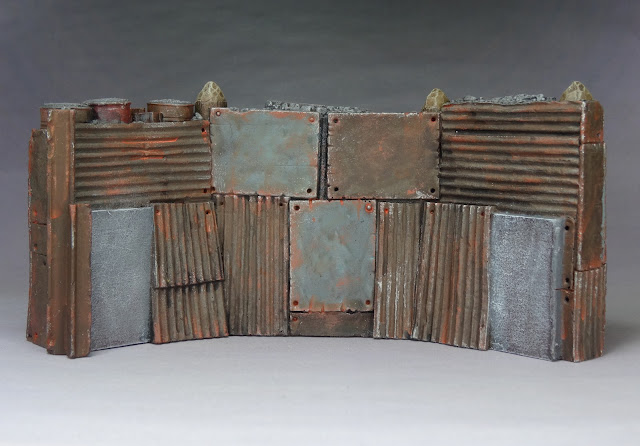 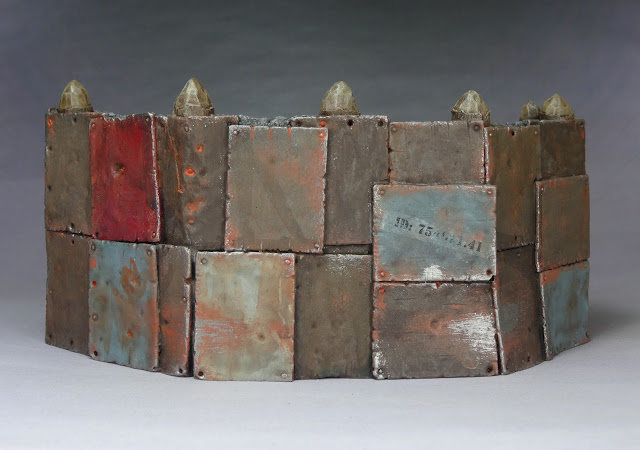 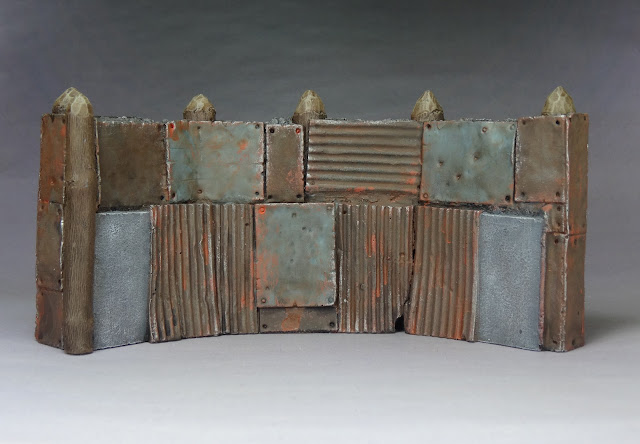 And of course we get several straight sections (4 of which I got to paint as you can see below. The straight sections incorporate very easily with the other sections thanks to a piece on the left hiding any joint so in effect; you don't even see where modules join (told you it was well designed).
All the walls have different designs and use different elements but they all keep the same feeling so they don't feel monotone and yet fit perfectly with one another.
All the textures really help the painter and if you're smart enough to use them as a help they will make you save precious time (which I only used to my advantage late in the process if I'm being honest). 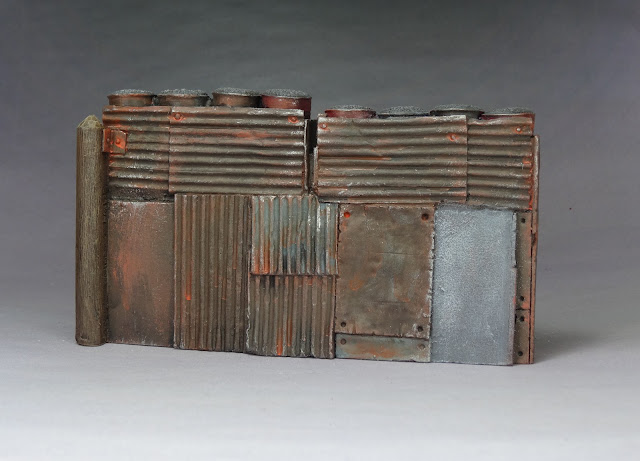 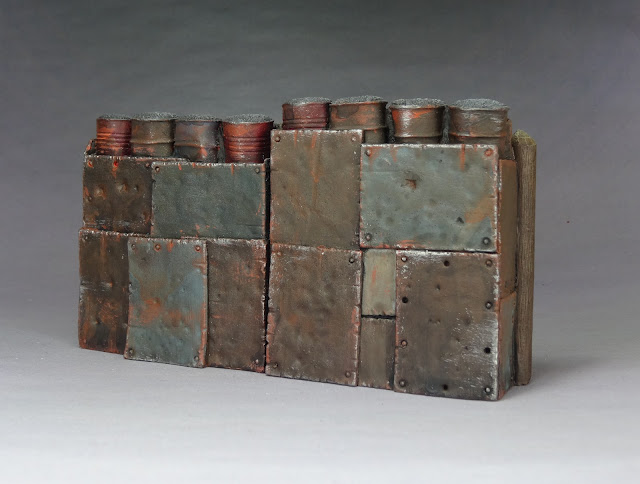 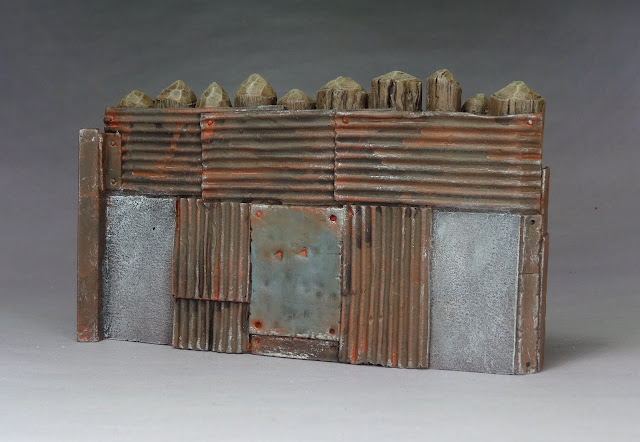 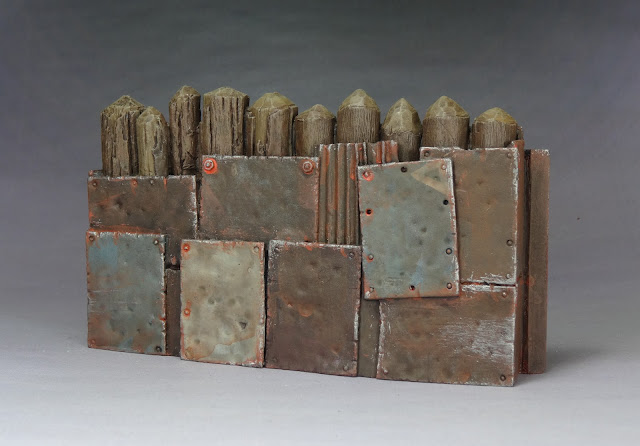 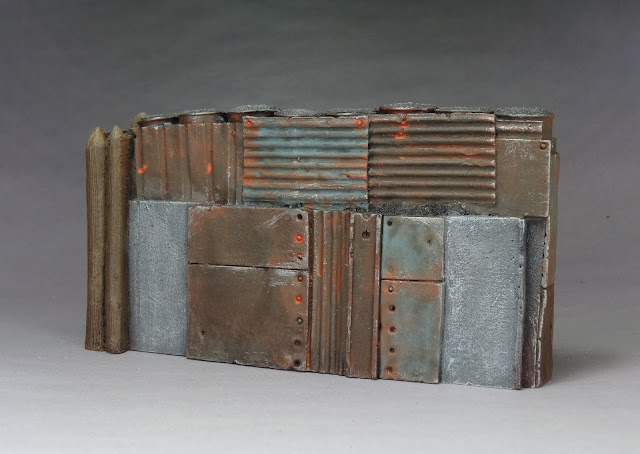 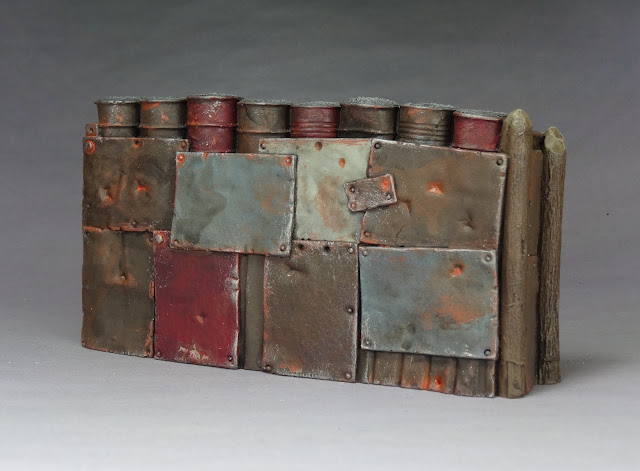 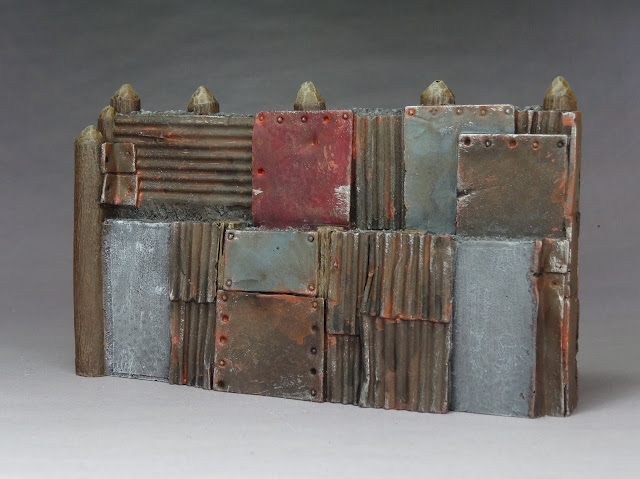 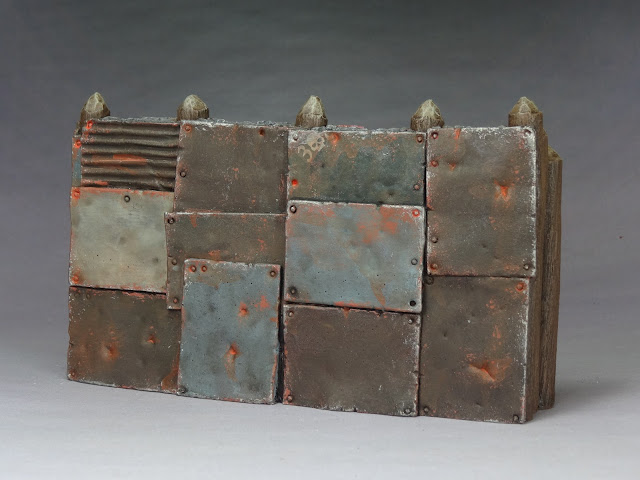 Now all wall sections also come with walkways that will help your troops defend the fort like any good castle ! Those walkways are composed of 2 mounts and a platform you can glue so you can choose which combos you want if you want some with a specific look. 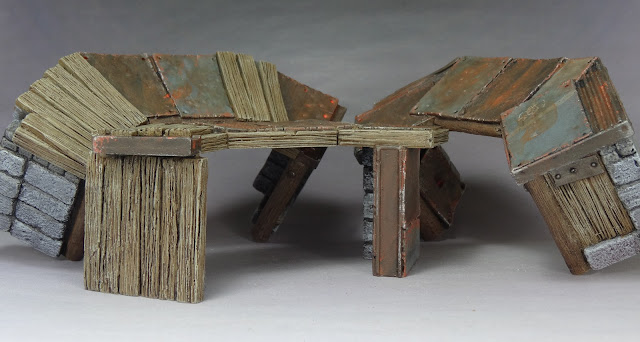 These are not specific to this KS but I had some small barricades from a previous order so I added them to what I was painting ! They're perfect human sized barricades to block lines of sight and add some visual interest. 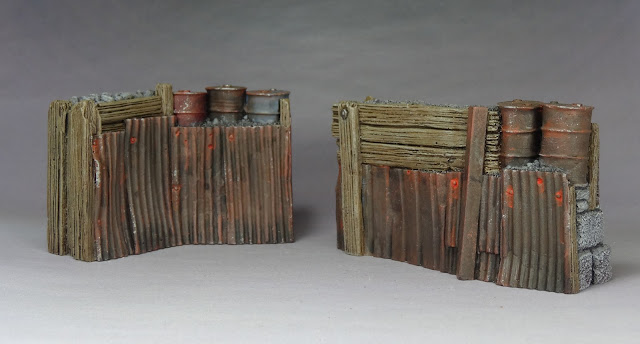 It's really fun to slowly get to a point where you have enough to create real cool scenes so I had to play with the pieces, combining them with what I had painted from the earlier sets !

Now of course, being the idiot that I am, I also took the opportunity to add even more to the already big load I had to paint so I took the barricades from the Ork Mek workshop (GW) and threw those in as well !
With a more humble and less eye catching paintjob, I think they don't look too ork specific so they'll blend pretty well with all the rest ! 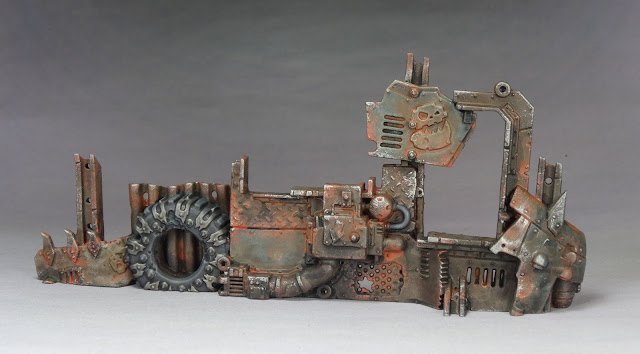 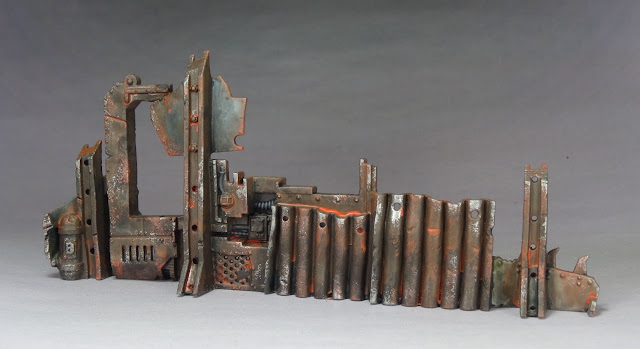 Now I told you I was an idiot, well I just confirmed it by adding even more to the workload and added these barricades from Kraken wargames. I got those in a KS some time ago and thought this was the right moment to paint them ! Although I ended having to chew more than I could swallow (explaining the quiet period), I now feel happy those were done with teh rest ad it all blends  nicely.

So here's everything I painted in one go ! 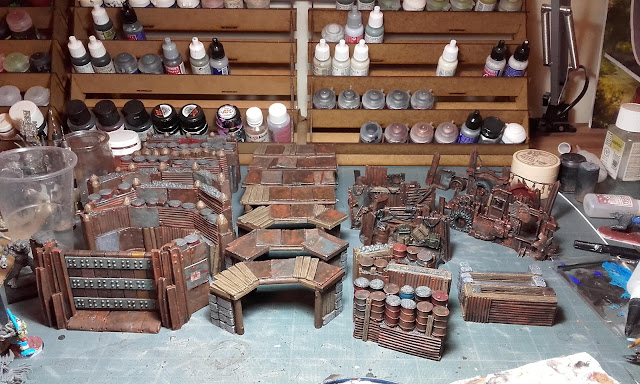 Fogou's Kickstarter is not out yet (but you'll know when !) and you might want to check my friend Axiom's version which is brilliant. I think the best way I can tell you  how much I love this set is that I actually ordered more before even finishing what I had ! Those new sections will be great additions to make my fort look even more imposing on the tabletop !
I really can't advise you enough to take a look at their stuff and save a few caps for it ! 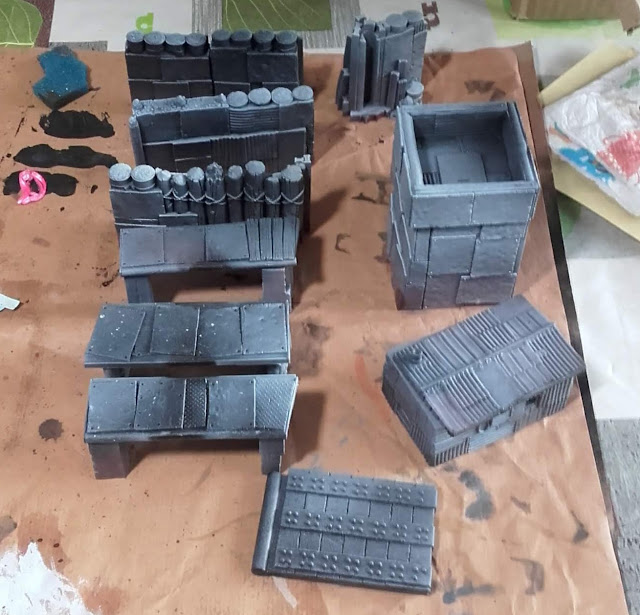