Alright people ! Some of you may remember that I am currently engaged in a 2nd edition Dungeon and Dragons campaign on the Oldhammer forum. This campaign is run by the most excellent Captain Crooks with fellow players Gaj/Weazil, Count von Bruno, Penddraig and Weismonsters.
The party has reached the 3rd chapter of its adventures and as the time goes by, the bound between players and the fun had is ever growing.

If you fancy having a good read with adventure, laughters, great cultural references and all, I strongly welcome you to give them a read. All the player's and GM's notes are hidden to make the story clear and nice to read but you can see how the work goes behind the scene (if you wish to) by clicking on the spoiler boxes. The 3 chapters so far are :
Back in March, I decided I wanted to have new models to represent our characters in the  campaign and while I clearly knew I was going to use the classic paladin from the Citadel adventurer starter set, I learnt that my friend Bruno found the devout cleric to be close to what he had in mind for his Spellsword Rambulge.

So here he is ! The devout cleric is now officially going to be a Spellword, or spellmace since Rambulge is more comfortable with a cudgel than with a blade. 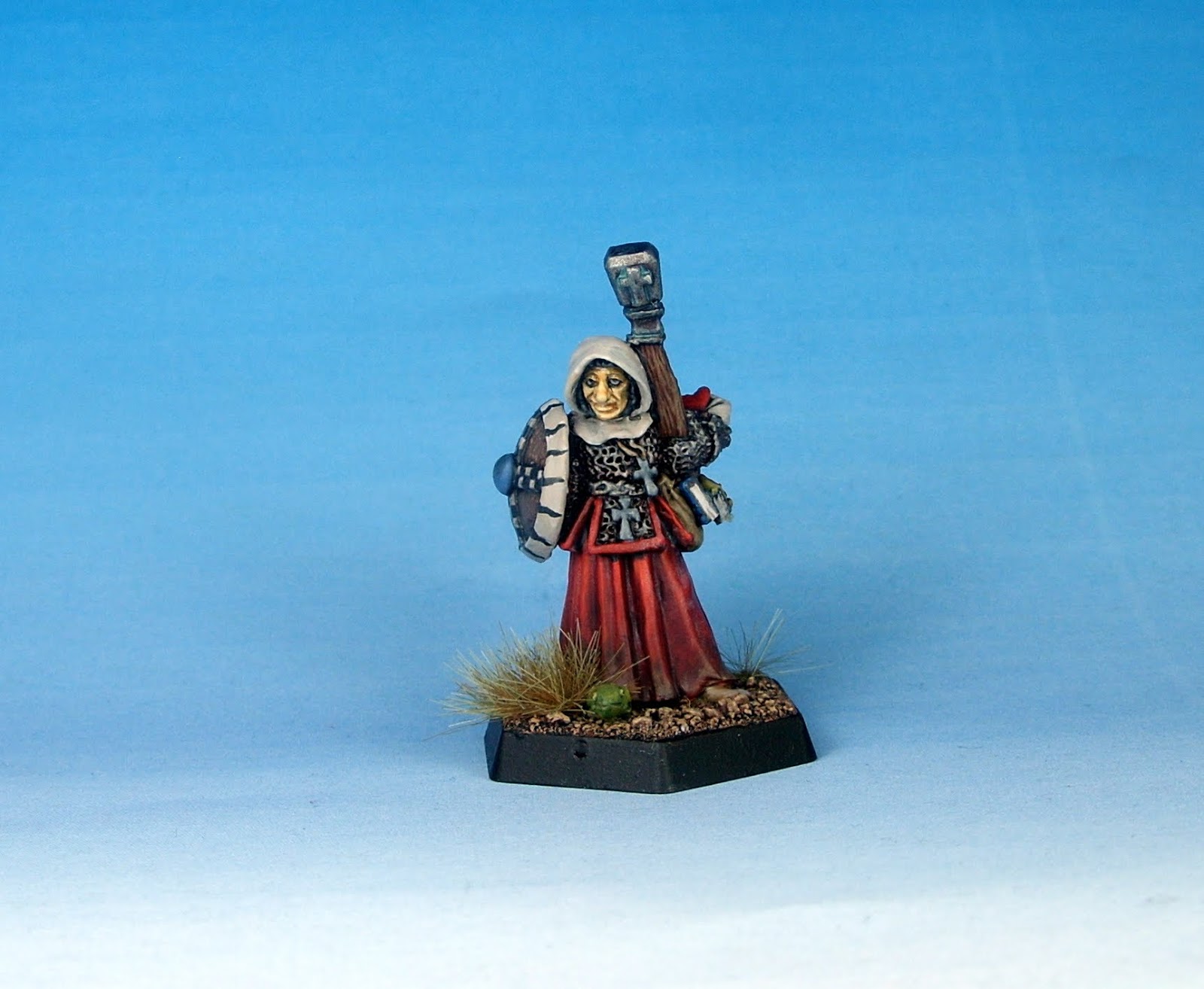 The adventurers starter set is a wonderful set which I happily got for quite cheap in a complete pristine state a few years back. All the models are archetypal and represent what you would expect from their race and class. They are really nice models though with tons of character and all.


As most of you know, the starter set came out with a wonderful cover by John Blanche which was the first part of a two piece drawing (the other one depicting the monsters from the monster starter set).

You can see I didn't go very far to get my ideas for the painting. Red for the robe with white for the hood and shield and black flames and checkers highlighted with some gold, typically the kind of palette you would expect from models of this period (will I ever get my own personnality and start painting my own way !. 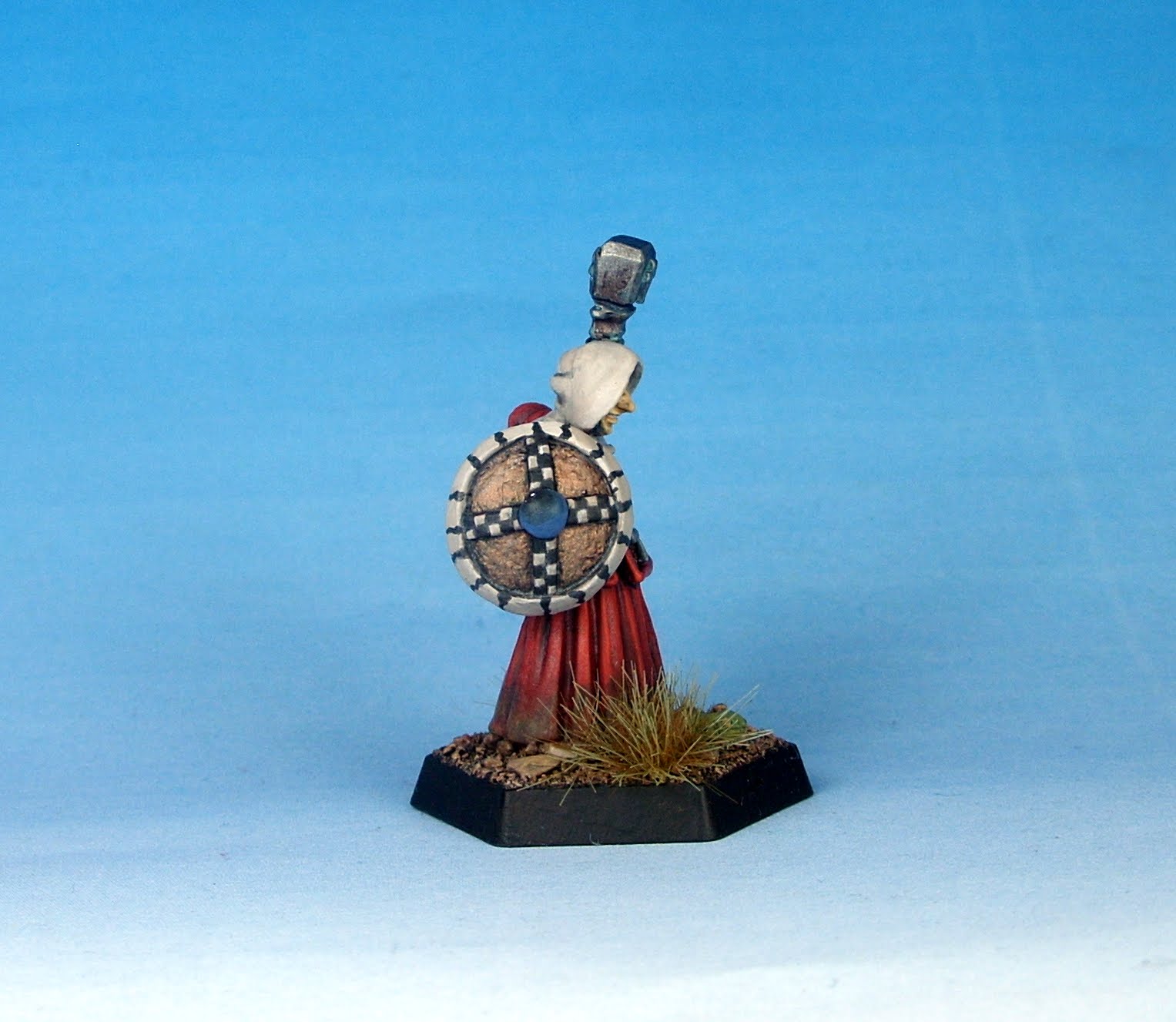 Only thing that puzzled me was that the eyes are sculpted which leaves no real margin to paint them and the resulting facial expression is not really to my liking. 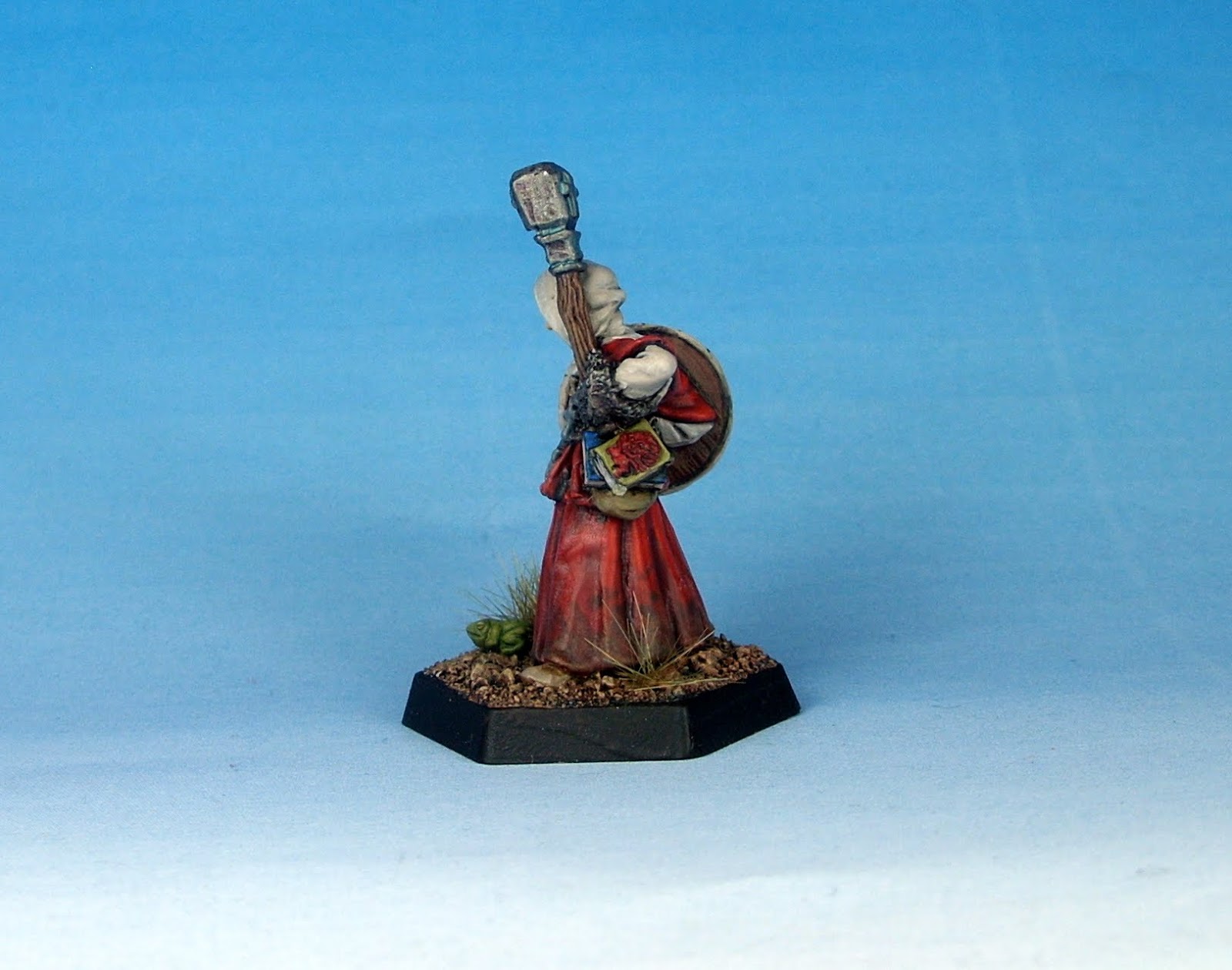 You may have noticed that a little guest had made its way on the base. This tiny frog here is called Lemmy and his Rambulge's familiar. It normally lives in the spellsword's pants but I thought it ought to come out for the photo !
It was the occasion to use those tiny frogs and the end of the drumsticks in the plastic bretonnian men at arms sprue.

At this scale it was hard to take a decent picture but I really stuck with basics for this one, I didn't want it to draw th eattentin from the real star and I wanted it to remain a bit hidden. 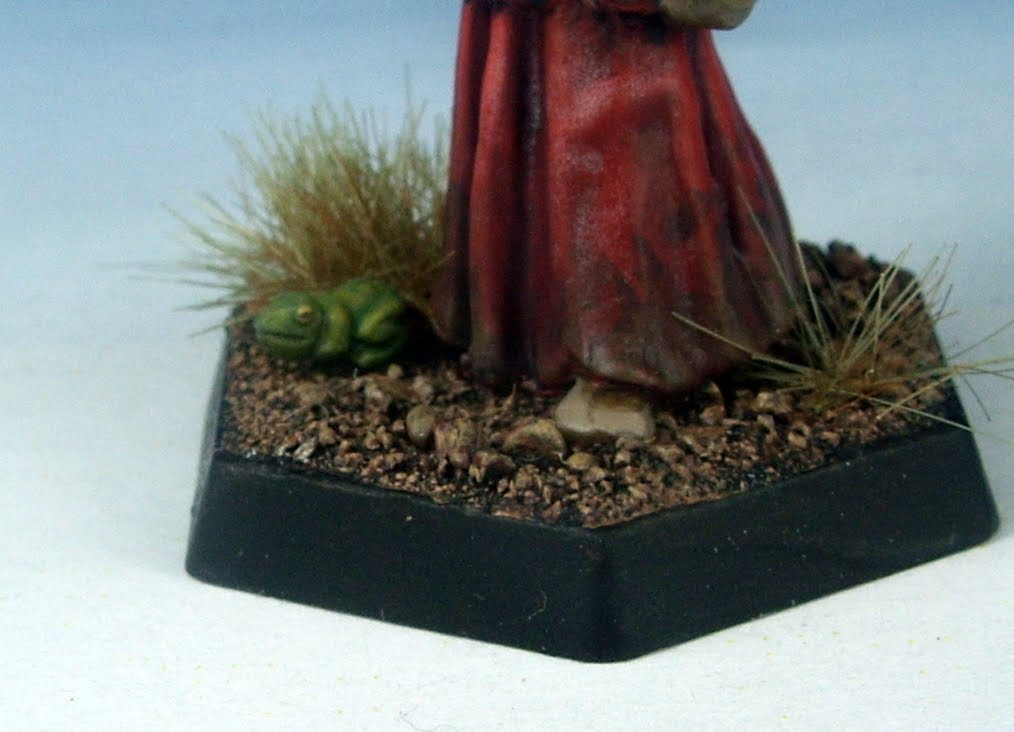 Like all the other characters of the campaign, Rambulge is one character I love to see developping and his relations with the softer gender are always a source of fun and sympathy ! 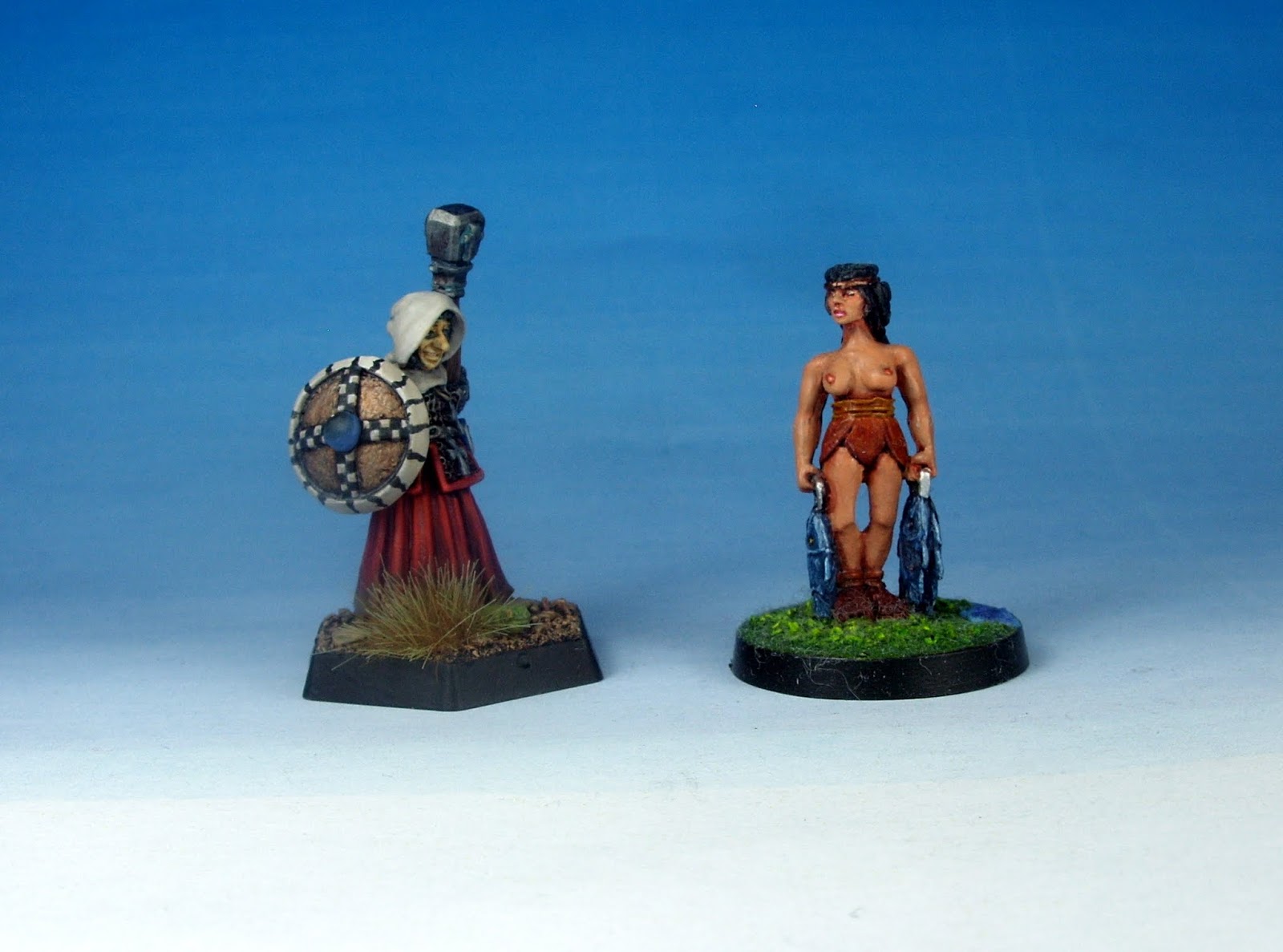 Rambulge offers more than meets the eye and he is always found at the hardest of the fight, facing strong enemies with no other concern than the good of the party. 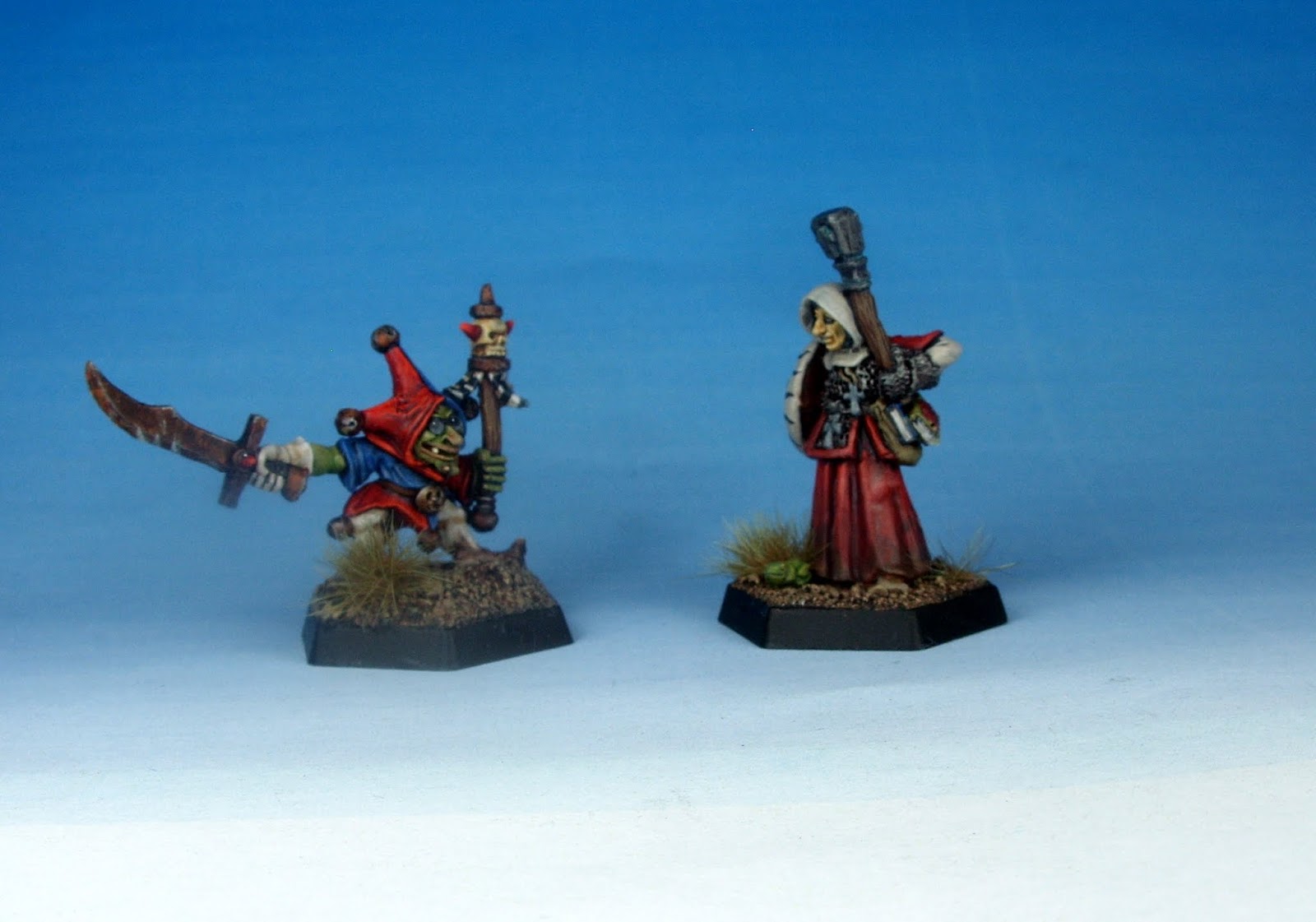 I hope you like Rambulge, to be honest I'm not entirely satisfied with the painting. It's been acommplished in too many sessions all seperated by too much time. This is not a method that suits me. I reallly need to finish models rapidly or at least in one go otherwise I tend to procrastinate and then I don't enjoy painting. After an hour getting back on Rambulge I was enjoying th emodel again but the end result would have greatly benefited from shorter work period. I hope Bruno will pardon me. After all my own character Seu is also a long way from being finished and I've set myself a personnal challenge of painting icons and freehands on him so now I keep delaying the model until I find the "right" moment...

Anyway, as usual, I just can't help myself ending my post with something totally unrelated...

I've received a few parts a while ago and I know have every part that's been made (and catalogued) for my chaos traitor terminators.

One things bothered though, there are 3 bodies in all :

Since I already used the terminator captain body to make a character,  I only had 2 bodies left to build my main squad. The first mody sporting a huge skullface mask, I thought it was apt to represent the unit leader which left me with only 1 body to build the rest of the squad from.


This meant building all the options from only one body. I really wanted to avoid building them in silly positions with the arms in the air or with silly monolithic identical poses. 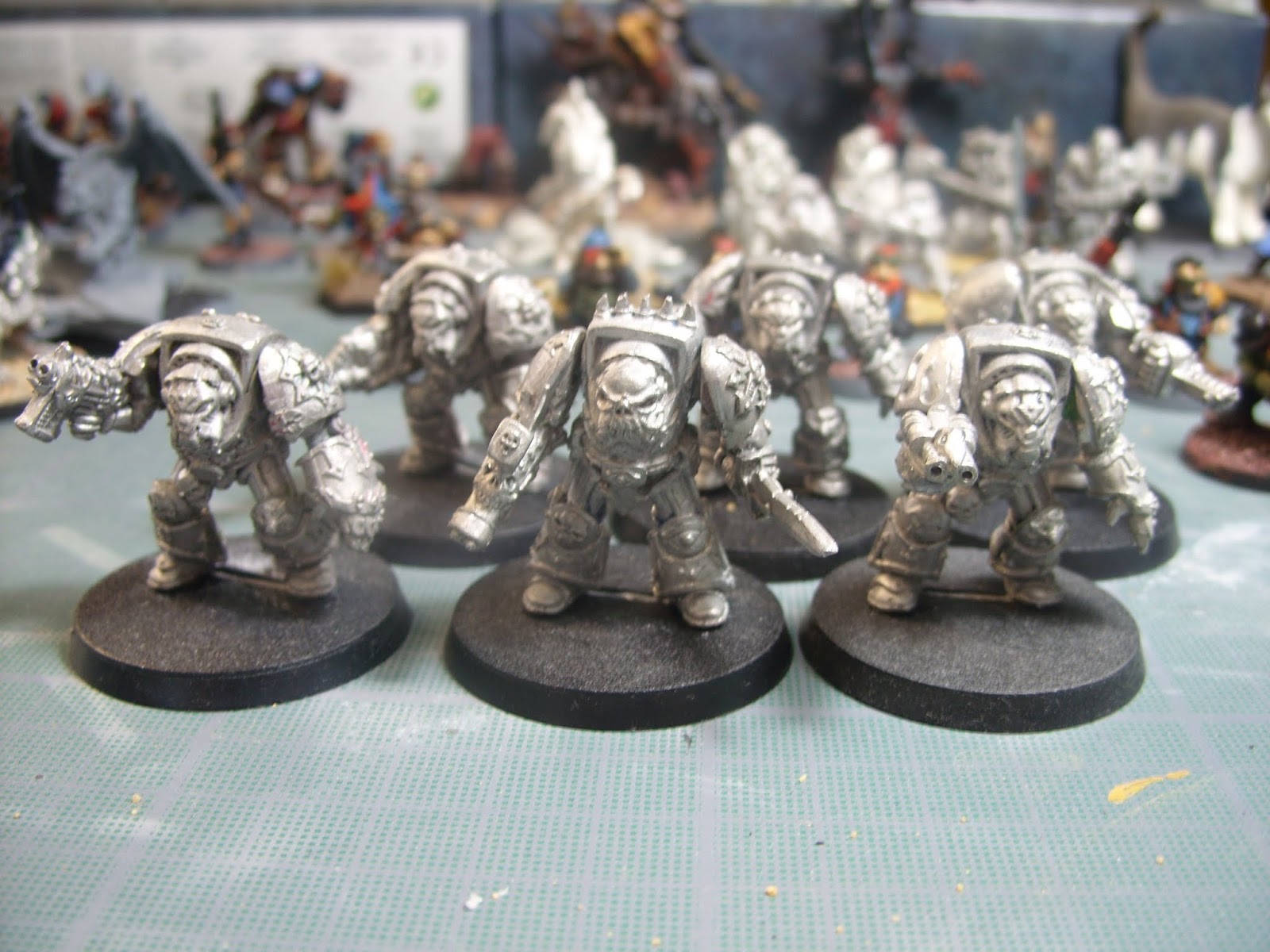 Some pinning and bending was used to give some variety to the poses without breaking the feeling of weight and might these model are meant to have. I'm quite happy with the result in the end since none of them look the same exactly and since all the poses seems "natural" or as natural as a man can look when his shoulders are higher than his head...