Rogue Quest Level One : The Fighter 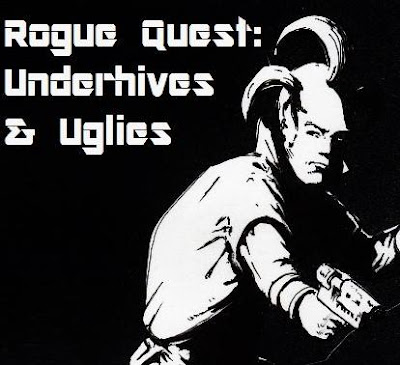 "Just what is Rogue Quest ?
JB, I want to know what Rogue Quest is ?
Hey what's that thing? I have no idea but I want to be part of it !"

Ahaha, calm down my friends, I am going to tell you about Rogue Quest right away, I have no will to torture the millions of you any further with that doubt.
I'm pretty sure most of you will have played some form of dungeon bashing at some point in your life, be it Dungeons and Dragons or any other RPG, Heroquest (and its advanced form) or Space crusade (and its advanced form too), Space Hulk, you name them...

Well I've had this idea for some time now to go back to the roots of dungeoneering but in the grim darkness of the far future. I know there already are some games to do just that (Space crusade and Space Hulk) but they lack something really important to me : Characters.
For me, the base of a good dungeon bashing is the motley crew which for some sordid reason decide to unite to rampage a dungeon.
Now I want that in the future now, I want a squat along an eldar with a marine leading the way in the corridors of a crashed space craft, the gutters of the underhive or the ruins of an old bunker. I want a bunch of heroes with their very own characteristics to seek treasures and encounter weird creatures.
I've talked about this idea here and there and one of my esteemed colleague Jon/Axiom has come up with the brilliant idea to make a group project between us to build a group of 6 adventurers based on the archetypes we all know :
- Barbarian
- Bard
- Cleric
- Fighter
- Paladin
- Ranger
- Thief
- Wizard

Inspired by the impressive work of Sho3box and Mr Saturday with their Judgement day project, we've decided to do something similar by painting a new model for our party one after the other.
That's how the Rogue Quest project originated ! Since we both are great fans of confrontation, it was only natural to replace our own dungeon quest in this setting.
For now, I'm still working on rules to play this and the choices so far are :
- Using Advanced Hero Quest (AHQ) rules and build characters and monsters based on Rogue trader and 40k in general.
- Using Rogue Trader rules with the dungeon generation rules from AHQ
- Using SPace hulk and giving more flavour to each character

So far I'm leaning for the first 2 options with a slight preference for the first one but this will have to be playtested and will be the object of future posts.

But let's get back to the point of this all : Characters !

To start this project, I somehow needed an evocative character, one that made sense. The perfect opportunity was this marine scout I had customised by the great Kevin Adams at BOYL this year. Not only is this model unique but it's also one meant to represent me and therefore is the perfect model to play in such a sort of game to me ! 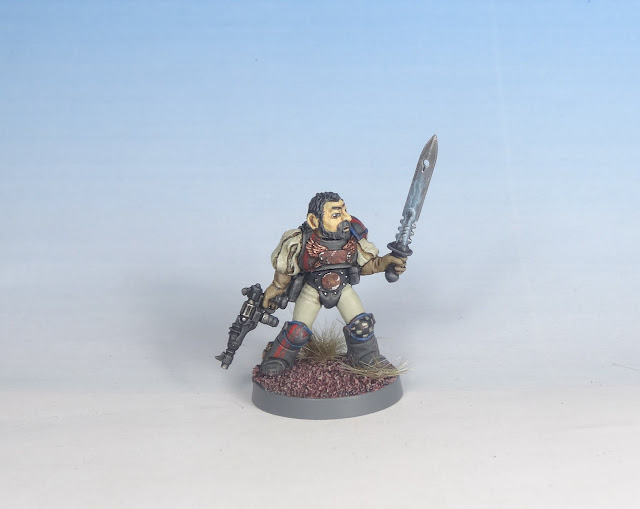 I won't lie, using a model Kev sculpted in front of me with a very dear friend and cider around while I could see Tony Ackland in the distance is absolutely priceless for the pathetic maniac I am. The model was one I got from Sho3box on the day and it was insane to see Kev build a whole replica of my poor self in the matter of minutes at the end of the day (I was lucky enough to be one of the very last to get my face sculpted) all of that while chatting with us and drinking. The final cherry on the cake is that all the funds gathered are meant for charity.  How right get this get ?


The very sad thing about it is that the model had only been partly stripped but since I had no other model, I had to use it for the conversion, the leftovers of paint were kept or removed dry which didn't help in some place like the arms... 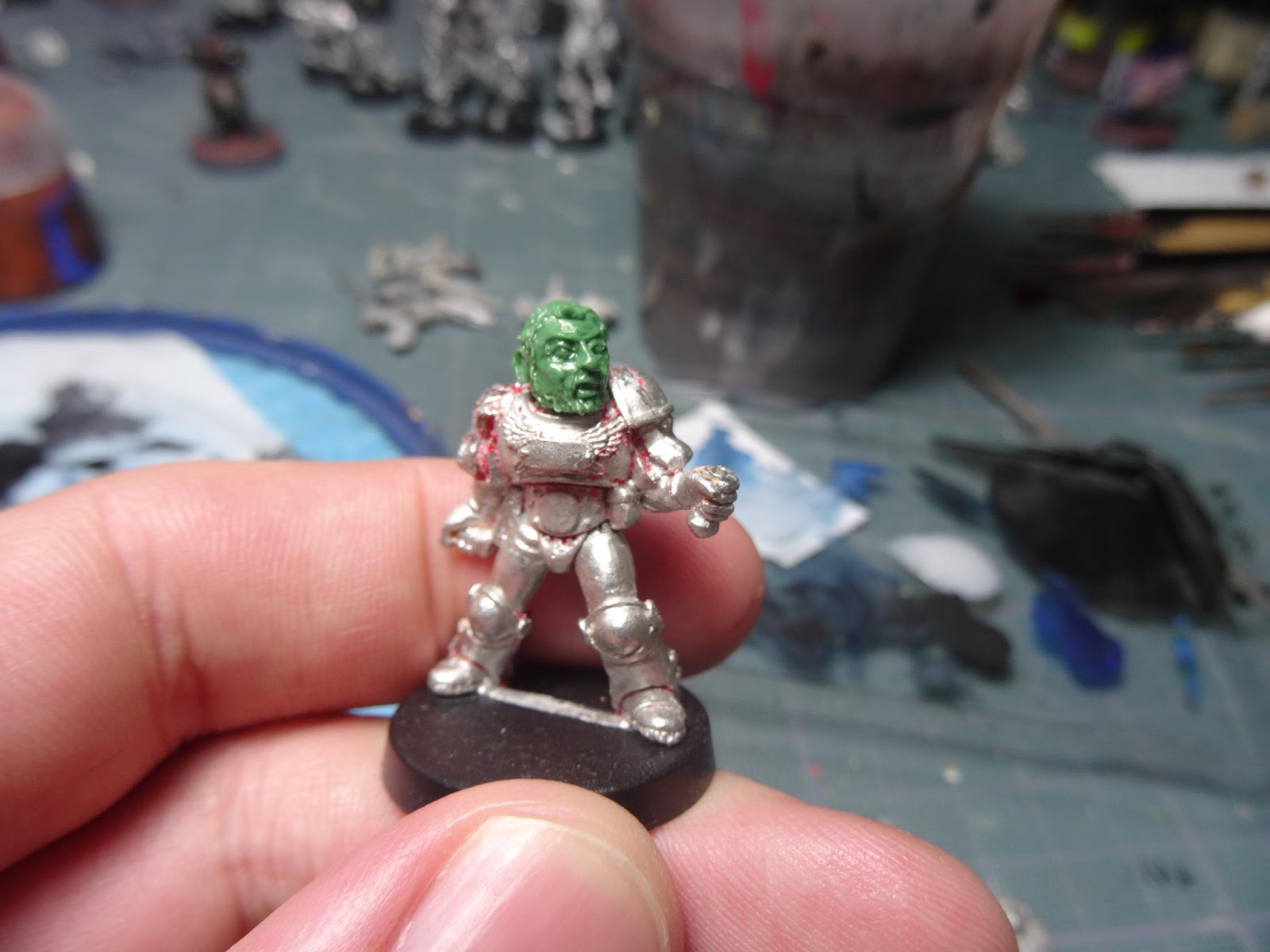 The model has also received weapons from the Skitari set (what a wonderful set really, perfectly scaled arms full of nice options and just all the bits you need to sci-fi up any model). 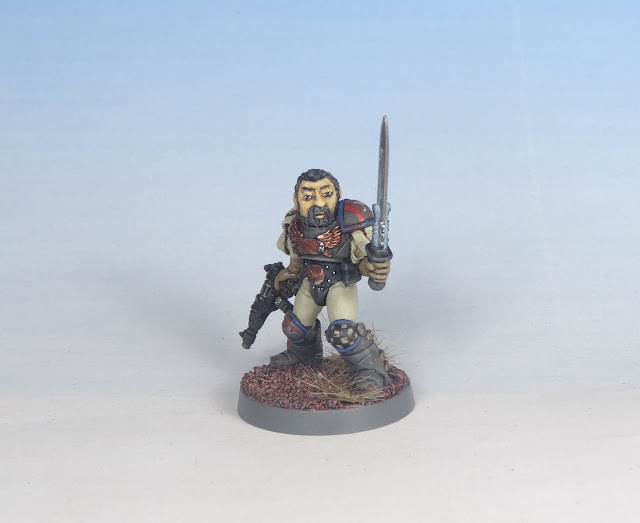 Now there's obviously a part of egocentrism in playing a model bearing my own face but I'm cool with it. In fact I remember some of the very first conversions I did were models of a friend of mie and myself to represent ourselves in games (Gods be blessed these awful conversion never survived...).

Now, I'll be honest with you, I don't really know if the model resembles me or not (I'm not really able to see if my own progeny resembles me...) but the head really reminds me of a very famous character I adore :

I'll let you judge which of the 2 is closest to the model : 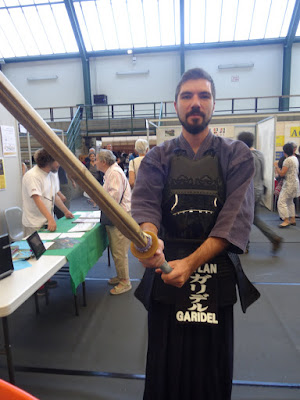 Aaaaanyway, enough of all this ego trip, the first character had to be one of the most simple and iconic and who else than the fighter ? There will be of course other classes represented : A wizard, a ranger, a barbarian, a paladin and a bard and who knows what characters my partner will come up with (well I may have a little idea but you won't get anything from me). 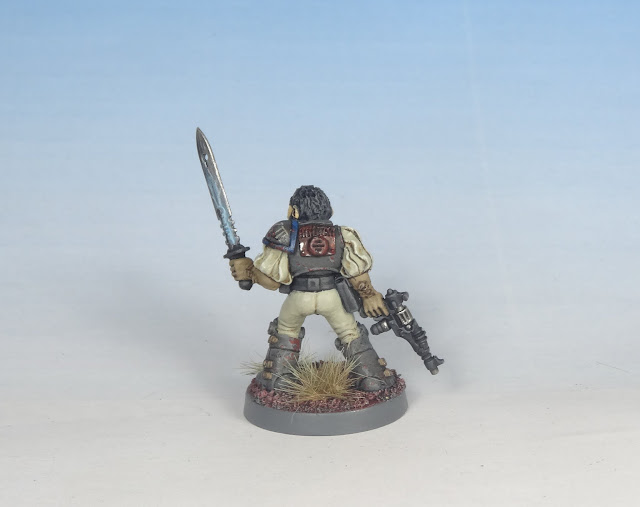 I wanted my fighter to be battle hardened and I wanted his armour to show he had already visited a couple of "dungeons" (gutters, space crafts and hidden facilities more likely) before so I weathered it a bit to show this one doesn't come right from his mother's skirt. 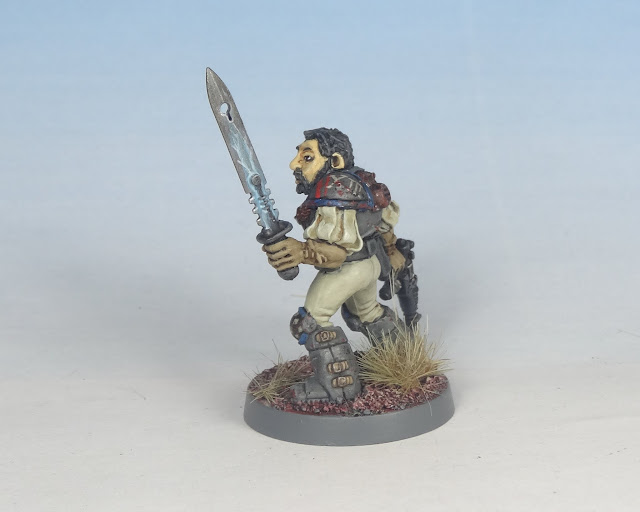 You can note I painted the plate on the imperial eagle rusted to show he may have tried to hide this sign how he could (either because he didn't want to give his allegiance away or because he is a traitor gone rogue... who knows). I also added a XIII on his left shoulder pad because 13 is a number I'm somehow familiar with for many reasons. Painting my name on the model would have been crossing a line and I think there was enough already.

Now since the model has a strong resemblance with Shintarô Katsu, I thought the model could join the ranks of my space samourai... I'm still not sure about it but if I end up struggling to find a 7th, he'll be the Gaijin of the group 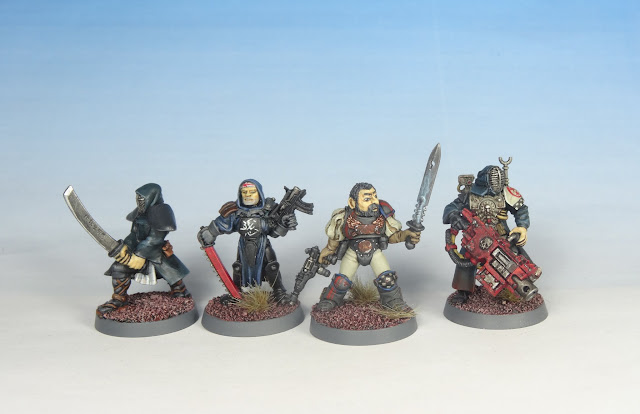 Now doesn't all this give you the will to explore the depths of the underhives ? Well I find it's time for  great fun exploring the darkest places now. In the Grim darness of the far future there not only war, there's also a ton of wonderful adventures for those who will make the first step...