Aenuroid - The sword of grim darkness

And here's another model done for a little group challenge ! This time there was no choice for me but to participate since I'm partly responsible for it taking place !
I've had an Aenur model for ages like many of us who once bought the WD that had him in it and like many people, I've never had a go at him because I simply didn't really know what to do with it...
That was until I bought the Adeptus mechanicus Skitari box and decided to try the simplest of conversions on him : a head swap. 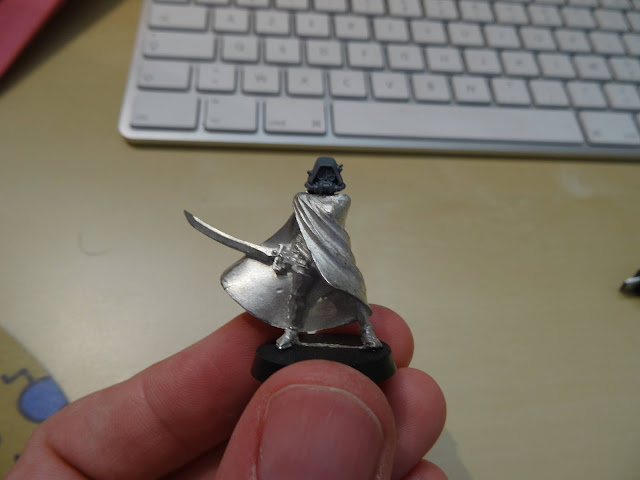 For some reason I really liked the idea of making the conversion as simple as possible and the fact I've been playing Dishonored a lot may have been an influence...

I posted the conversion on the 'emporium of rogue dreams', a FB page about sci-fi models from mixed origins (2000AD, GW universe, Starwars or others) and thanks to Evo Von Himmel, it quickly escalated into a modelling challenge for all to come up with their own vision of the model.
You may have already seen Jon/Axiom's excellent tech priest on his blog and I can tell you the other entries (the competition is ending this month) are all wonderful !

Modelling wise I kept the conversion simple as I said and I only removed the dagger to replace it with a gun when I was 80% done with the painting. This may come to you as an evidence but it was obviously a very silly idea which made me ruin a good deal of painted areas...
Anyway, since I wanted the modeling to be quite simple, I took the opportunity to push the painting a little and decided to try some freehands on the cape. This is obviously an equally silly idea to want to have a try at freehand on such a base with all the folds everywhere but hey, being silly has never stopped me from doing anything so far (unfortunately).
The 2D photos actually show the inquisition symbol a little more distorted than it is in real and apart from a little symmetry issue I'm actually quite happy with how it turned out.
The palette is one I've used on the Helmawr gangers and the imperial noble as well (maybe I'm in my Blanche period or something) but this time I made it far more connected to the 40k universe than I usually do by painting an inquisition symbol on it. I wouldn't be able to explain why though. That's a familiar design I suppose.


I also tried to make the sword look futuristic by bending it like a katana and by painting it with transitions like I did on Camilla's sword, the result is not as good though and I should definitely try to work on my blending on small areas like that.


All in all this was a fun project and I cannot wait to see the other entries that are to come ! For once I had the feeling to paint something a little different in terms of model and painting style though it may not shox since the palette is a familiar one. I tried my best at blending the red on the cape (which I then totally messed with the stains and all...) and he freehand on the cape was also a very nice try, all these are obviously time consuming but from time to time I do enjoy going whee i don't usually go painting wise just to learn new things and see how I can make my work a little more fun.

Next model will probably one of my most personal models ever and the start of a nice little project too (yes another project started I know).
Publié par Asslessman