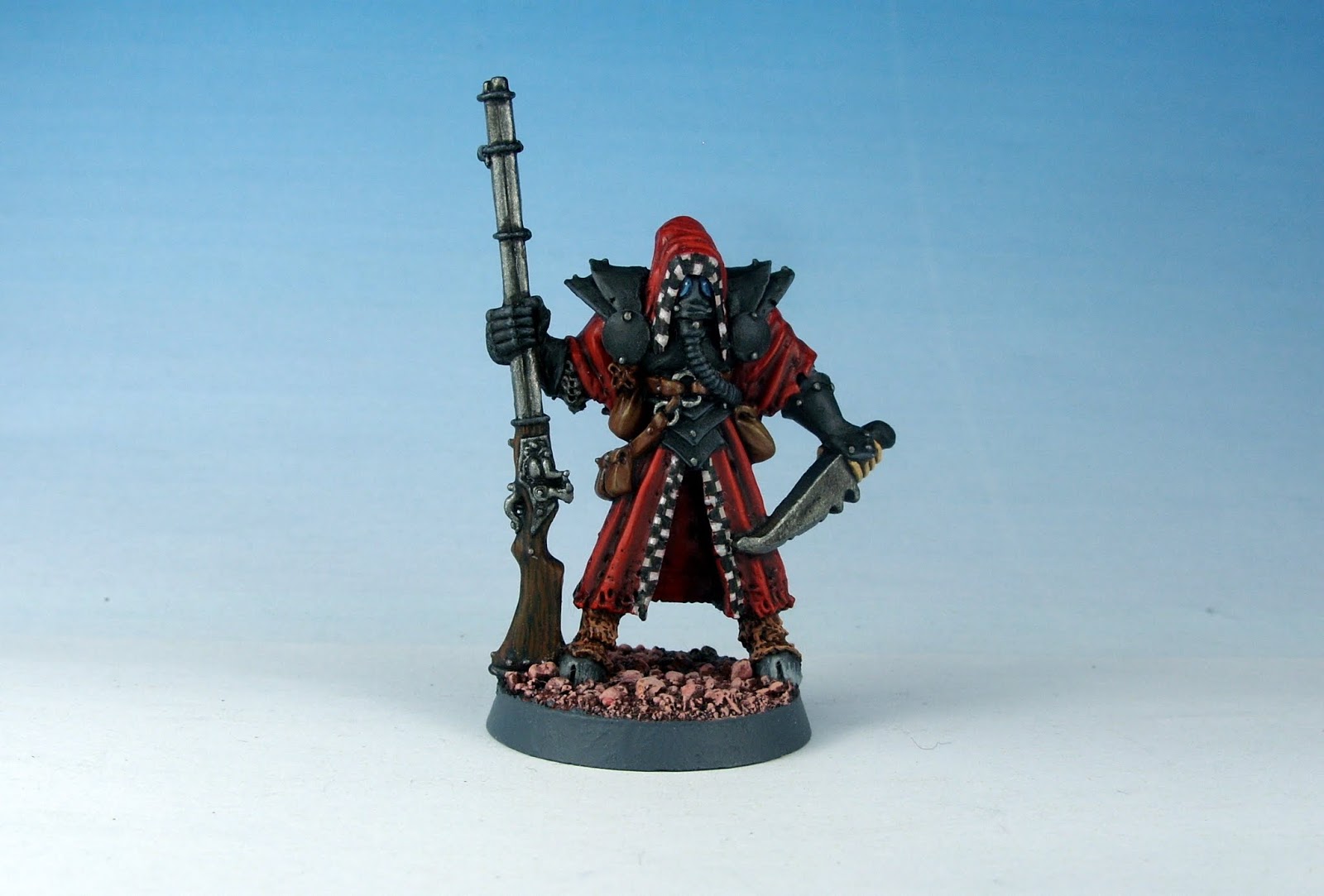 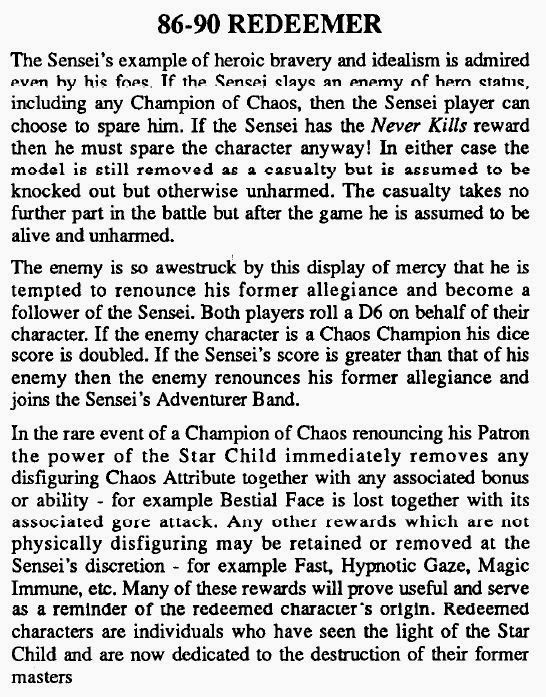 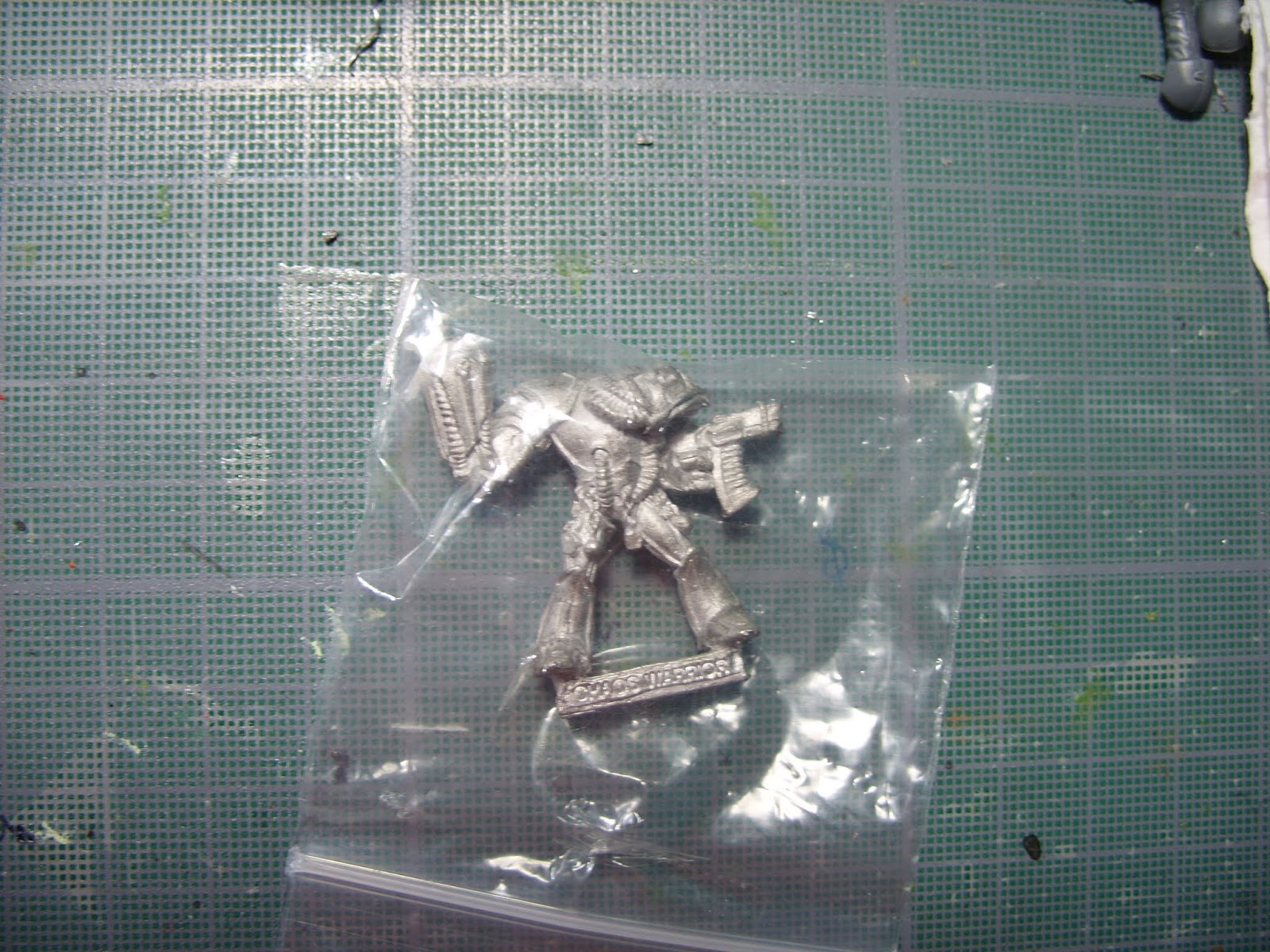 Part of my youth : the Fallout soundtrack

Today's post is only remotely related to the hobby but any of you who has already played the first 2 Fallout games will mostly have had the video gaming experience of their life.

I won't go into the history behind Fallout but it was first published in 1997 and was based on the RPG Wasteland by Steve Jackson (the american one, not the GW one...).

The game is a pearl and I can't count how many games my younger brother and myslef have played, using every kind of character our twisted youthfull brains could come up with...

Email ThisBlogThis!Share to TwitterShare to FacebookShare to Pinterest
Libellés : every minute counts, fallout 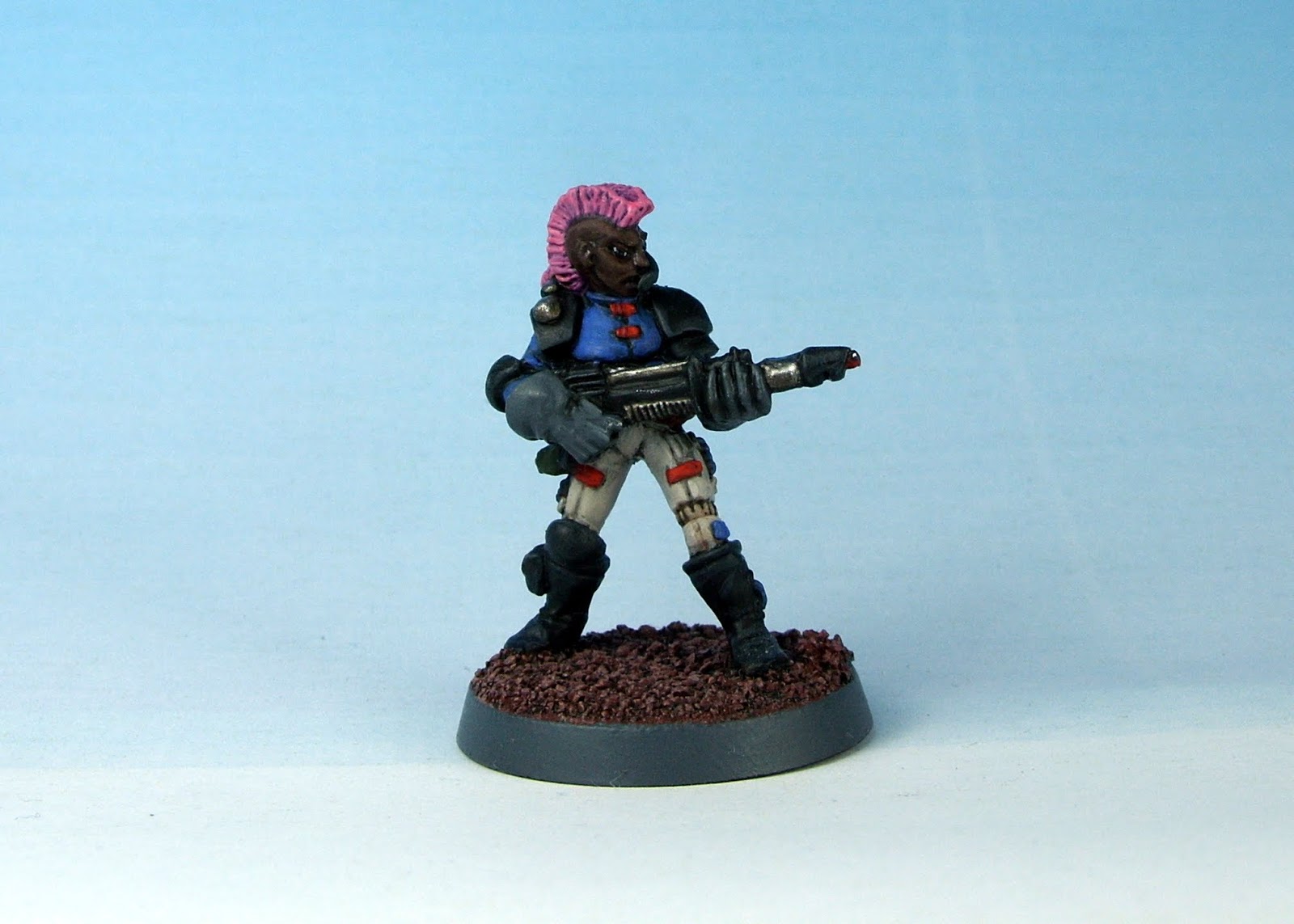 An here we are with another model. This one arrived last week in the mailbox from my colleague Cheetor/Shoebox and as soon at it arrived, it was based and primed and good to go.

The miniature comes from Interloper Miniatures who produce excellent anthromorphic animals. You can also note that the model has been sculpted by no other than Bob Olley which is always a sign of quality : 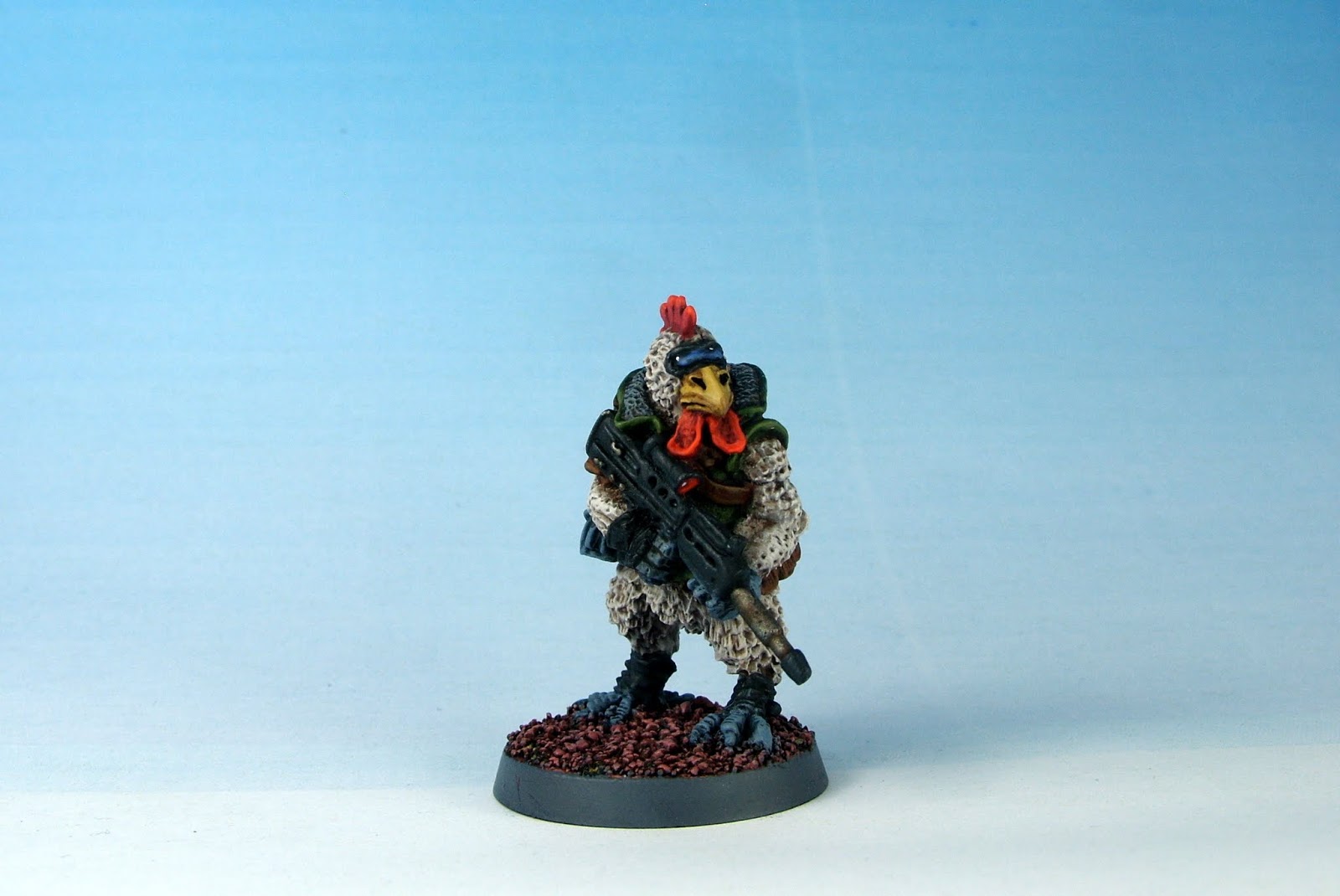 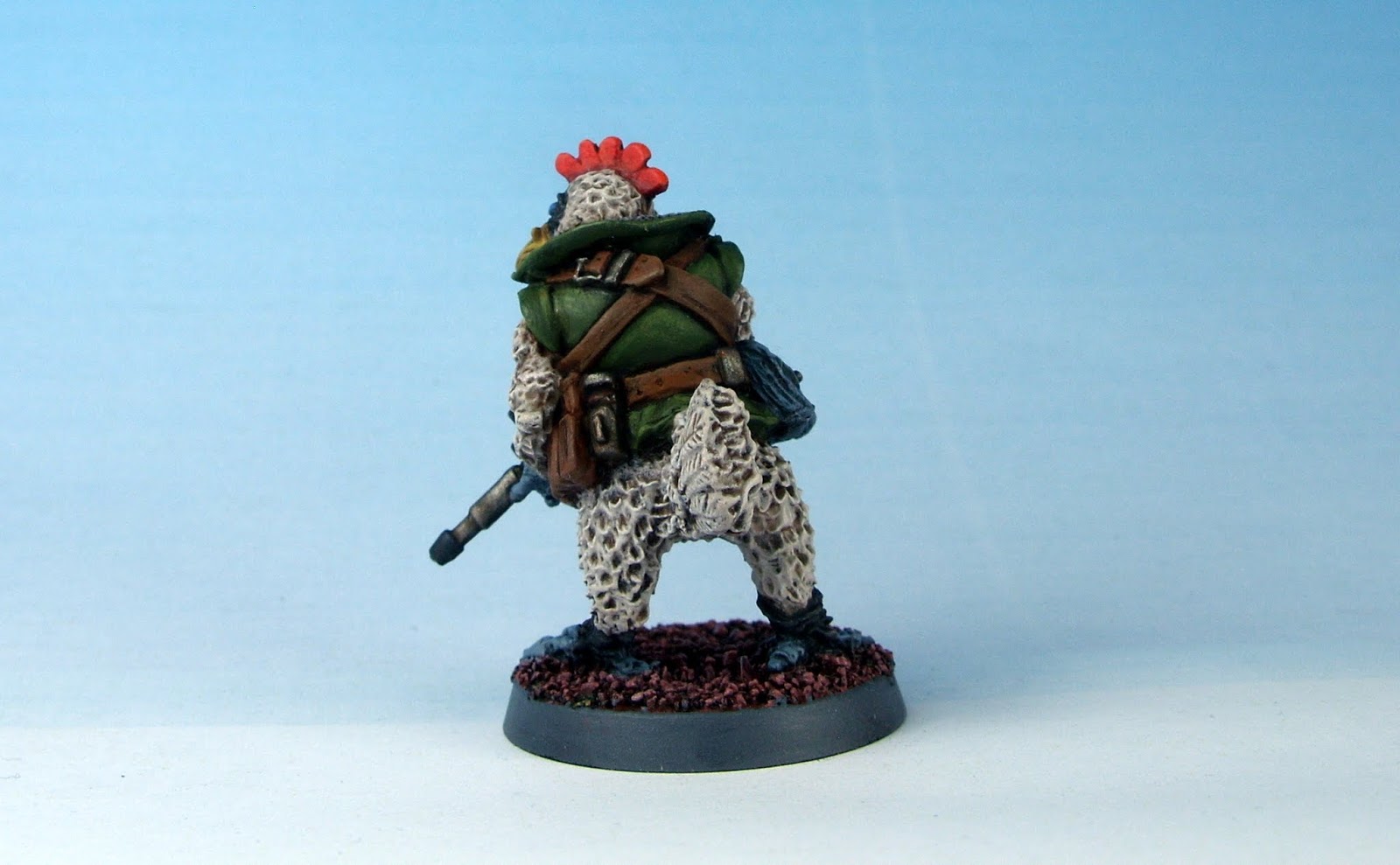 I did not mean to paint this one as fast as I did and it was actually very low in my priority list but when I had it in hand I felt compelled to prime it and work on it. in a couple of sessions, it was done to a reasonable standard thanks to the great proportions of textures and details (juts the right ratio to have an easy and lovely model).
Read Moar Skullz »
Publié par Asslessman 21 comments: OK there's been time enough for all the people who wanted to enter the competition to do so. Now is the time to decide who is winning the most sought after reward of all : an unloved model modelled and painted by no other than me with the winner's touch.

Having received nuemrous propositions, I've decided to list them in an Excel Sheet. Why would I do that?, well I'm a engineer during daytime so numbers the lies you can get out of them is part of my job and skills so I guess it came as the way to go for me. That and it is very convenient to actually draw a winner from the list.

Sooooo, here are the entries and their associated propositions : 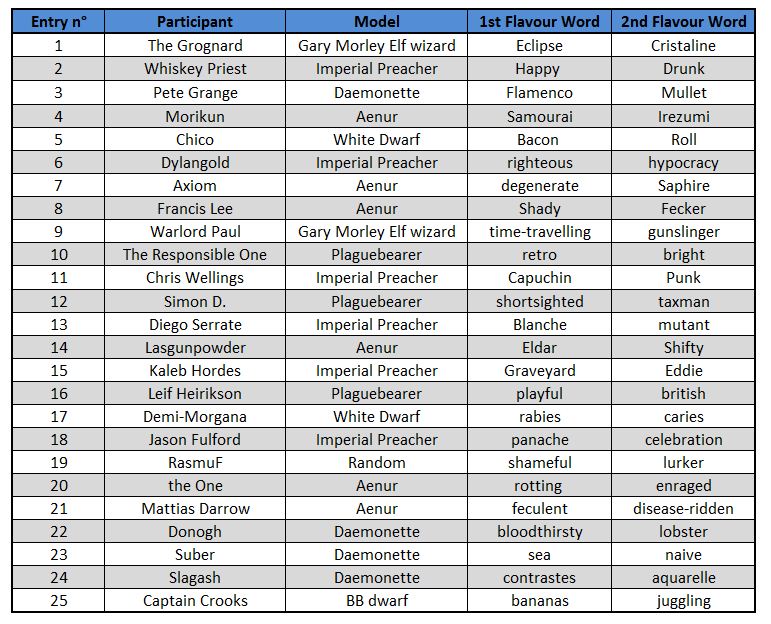 Looking at the Charts you probably realise that some models inspired the contestants more than the others : 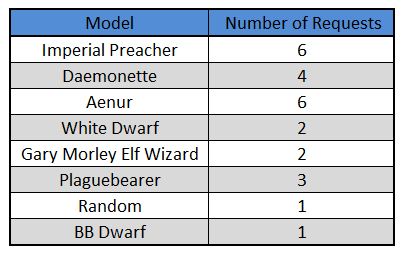 But let me show you in a more graphic fashion : 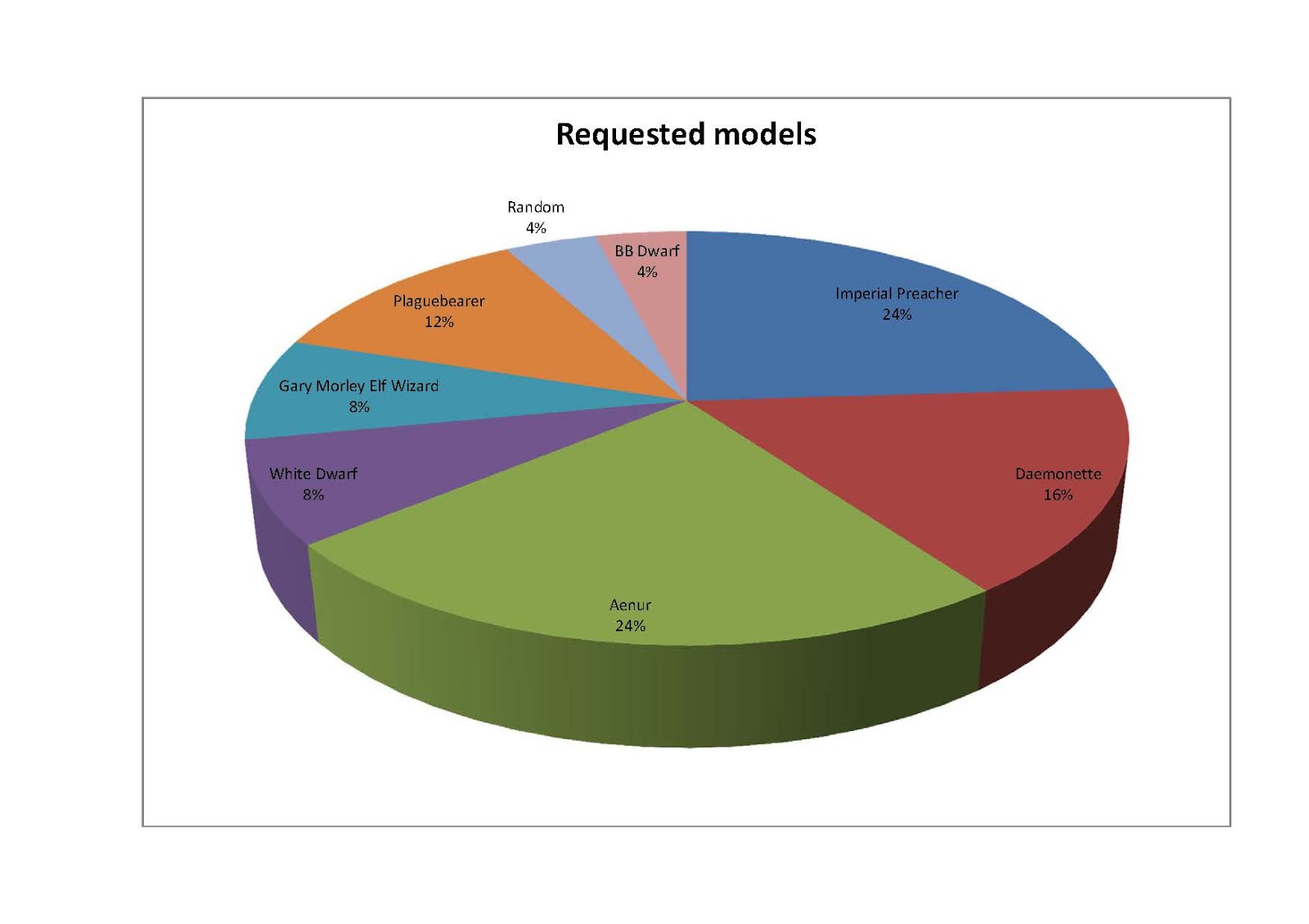 Everybody loves a good pie chart right? No? Ah OK, guess my love of numbers is not shared by all...

Funny to see Aenur and the imperial preacher were the 2 most wanted models with the Slaanesh Daemonette a close 3rd.

So maybe you'll like how I chose a winner ?

Oh yes you're right, with Excel's random command (that's the french version but I'm pretty sure the english one has it too :D) 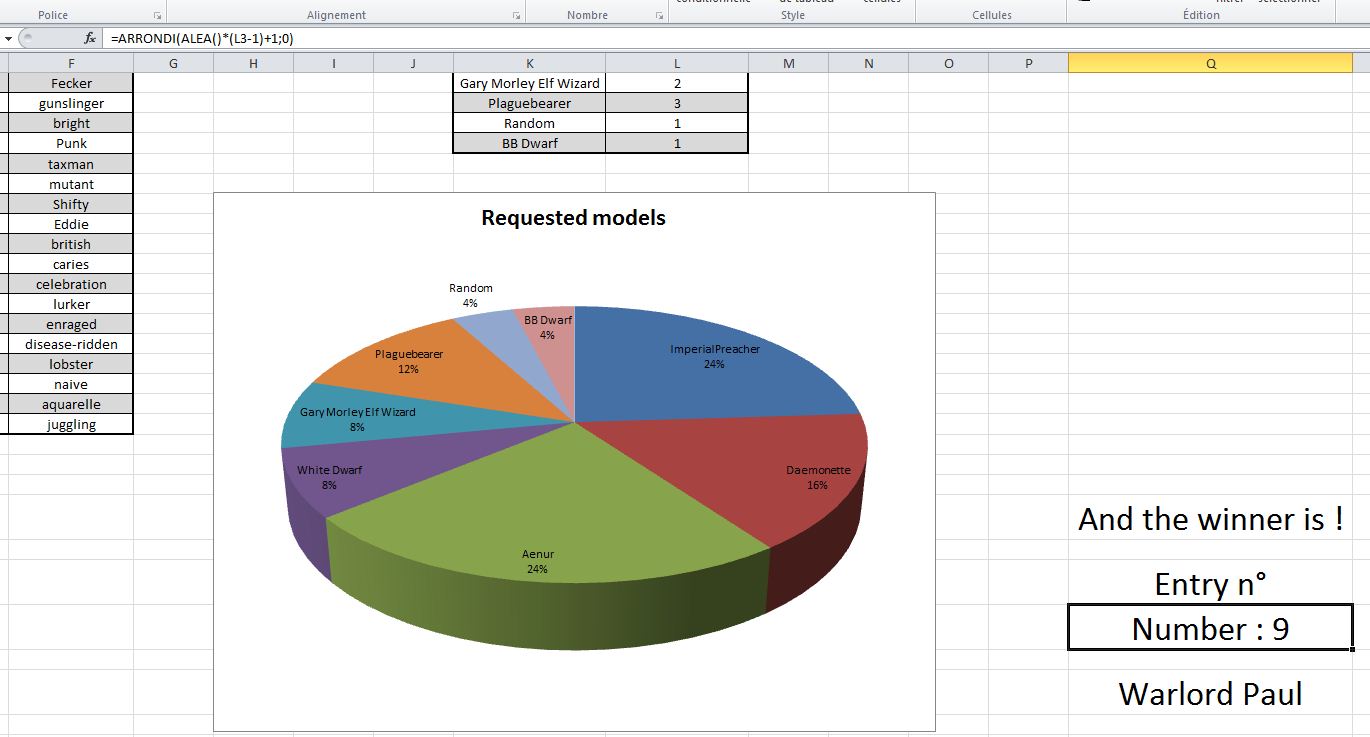 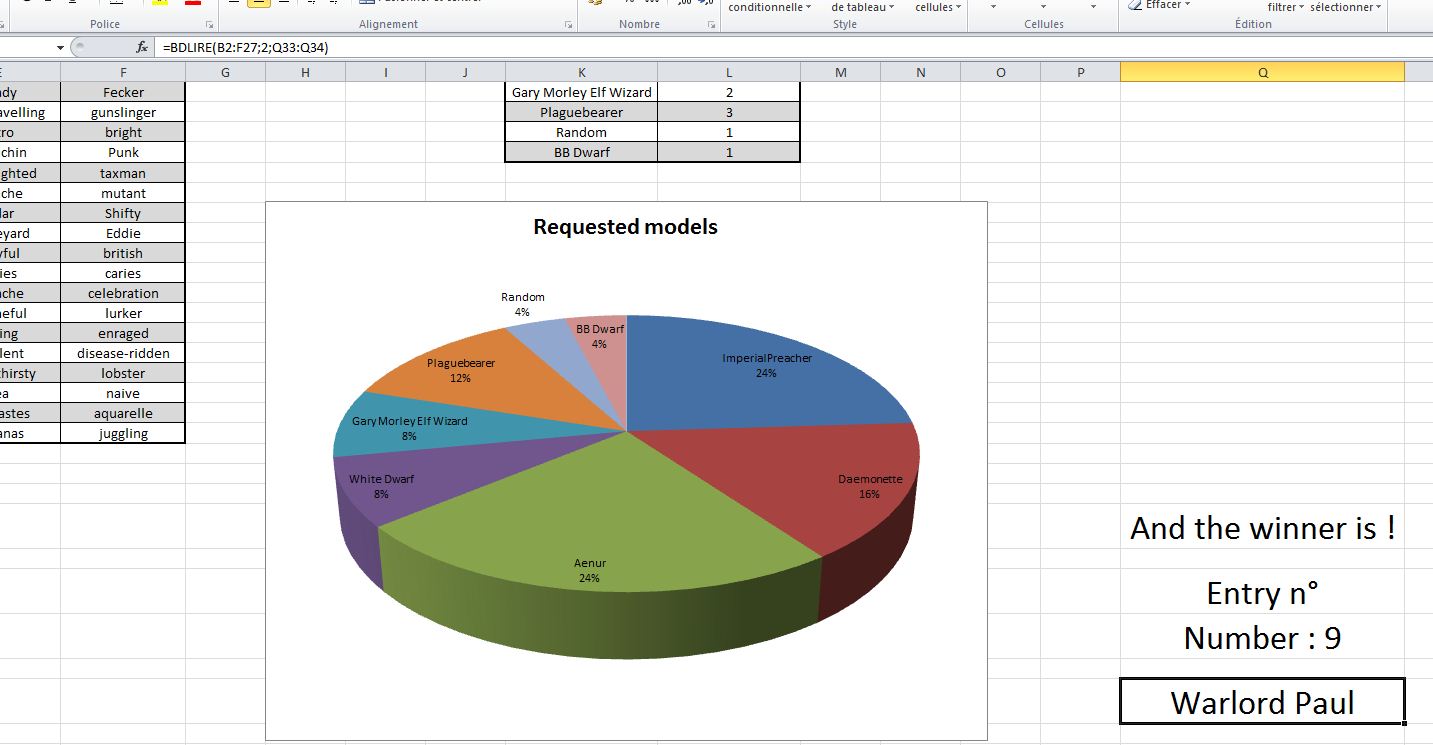 And we're good to announce the winner! (simple as that).

All it took was a lunchbreak of typing and a few formulas here and there, why give the task to an anonymous online random generator!

I have to say if I had a D25 I would have obviously opted for it but I'm pretty sure you'd have missed the pie chart even though you won't admit it.


Well you must have understood by the heavy Spoilers in the pictures above who the winner is . I am very happy that Mr Gates via his microsoft software decided to award Warlord Paul of this random because though I've had very friendly contact with most people on the list above, he's been a very enjoyable person to deal with via all this blog/forum/facebook/interwebz thing. (that and his proposition is one of the rare I can actually achieve in a reasonable amount of time...).
I'm also very happy that the model to get some love is one of those which would have been the least likely to get some attention from me so it's actually a triple win !!!

Now I have to find a way to tie this : 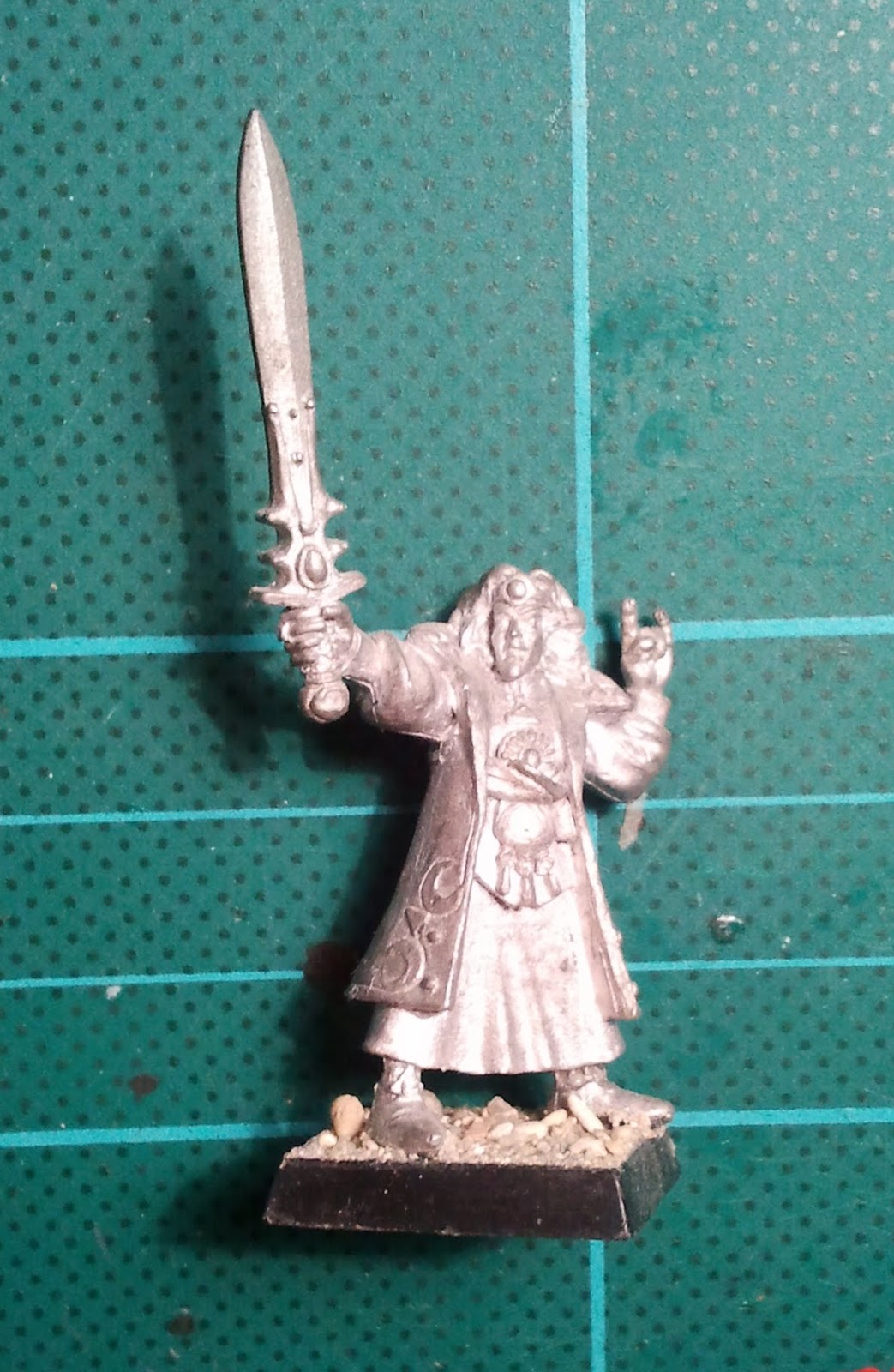 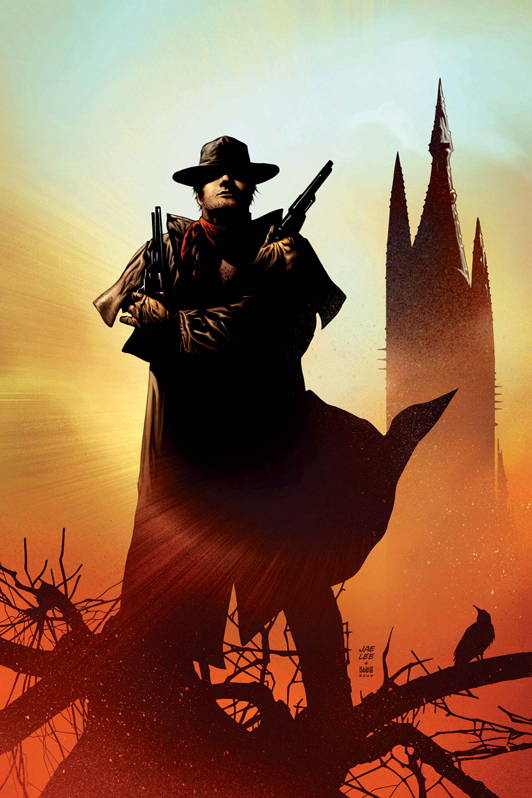 You can see there is already a little idea spawning here...

I've actually strated prepping and basing the model and there should be just some little conversion job to make this one look good...

Next post will probably be about another Rogue Trader adventurer OR maybe about the Grey Sensei I'm building for BOYL2014... Only time will tell...