The A teams and how to tune a ride

Ok people, I recently showed you what I was to make of my used deostic, well, I have made some putty work and felt the need to go the demonic way. The job is not finished (far from it) but it's taking the road I wanted... 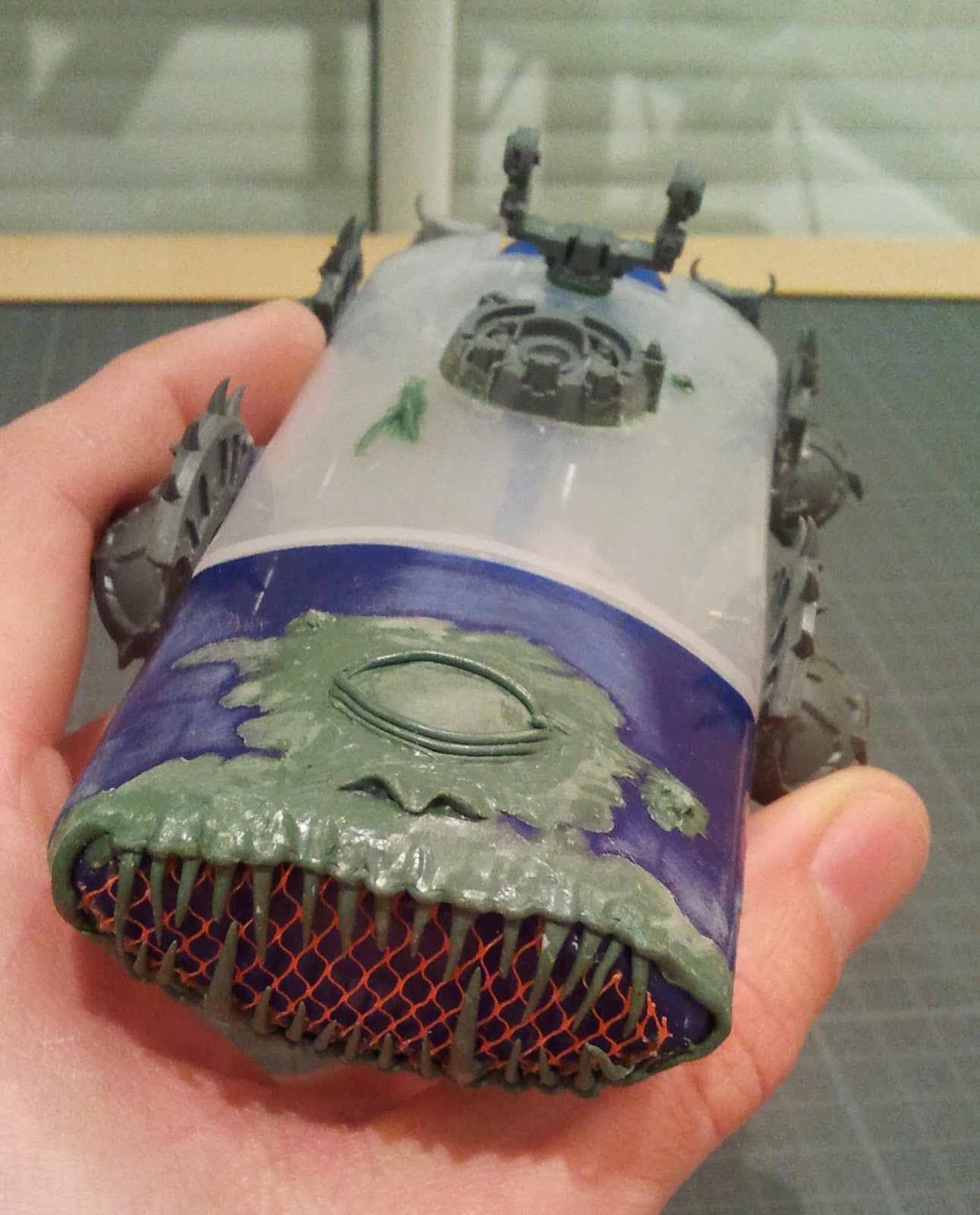 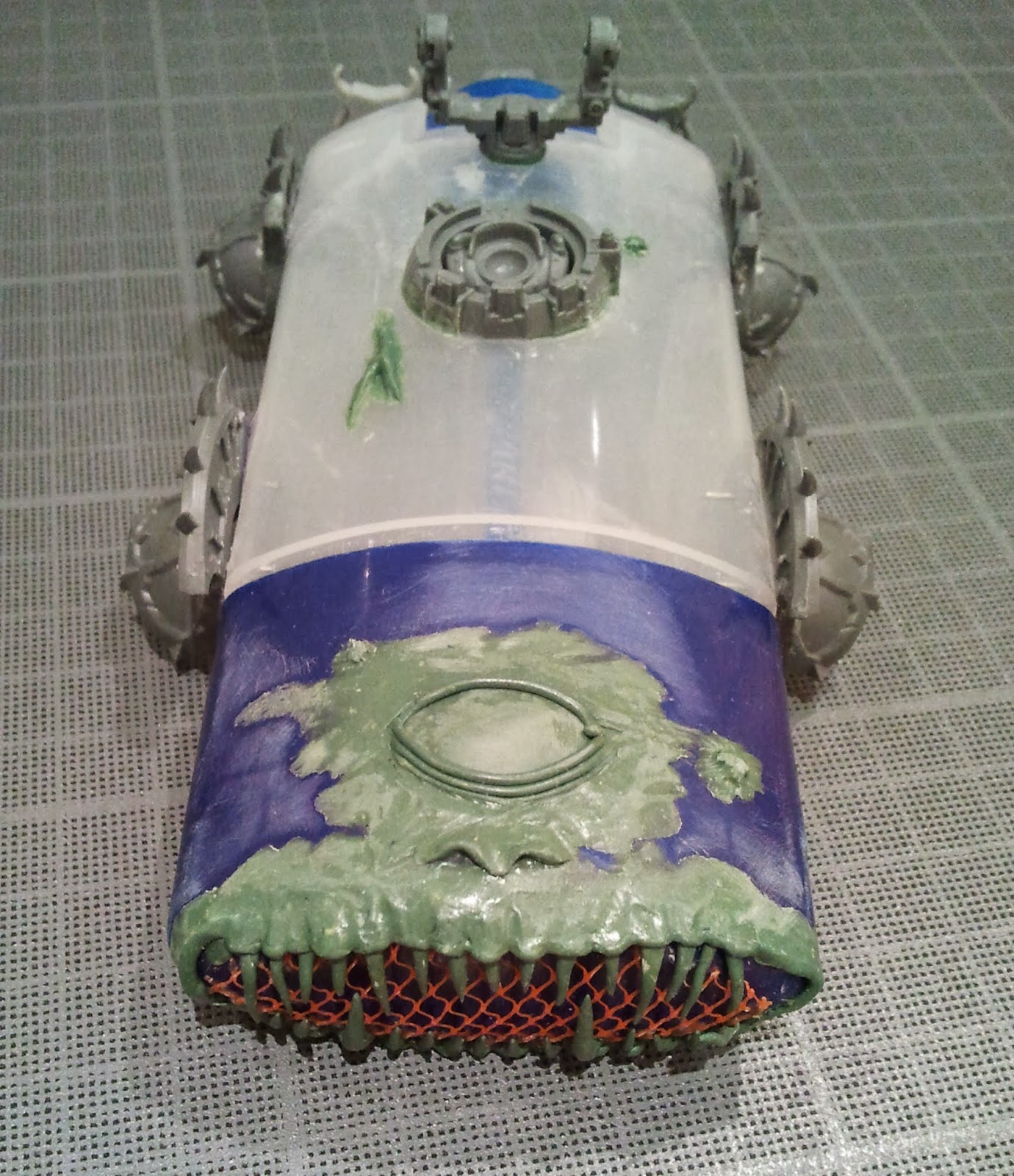 I am going to add some lips made from torn metal and I will also add some organic textures thanks to Strygianheart's excellent tips. I also have to find a good way to design reactors on the side but I don't have lots of ideas about it. For now it is heading towards weird sphincters with mechanic bits consisting of guitar strings and things of the sort but nothing carved in stone here...
There is yet a lot of work to smooth everything and blend what has been done and make details fine but I've learnt that you've got to make little steps one after another in these kind of projects rather than rushing and ruining what you've done before...

As you might have guessed from last post about the venator gang, confrontation and rogue trader skirmish has been on my mind lately. It's now a few months I'm trying to gather as much adventurers and hive gangers I can to build a campaign mixing skirmish battles (using either confrontation rules or inquisimunda's) and some role-play.
The gangs I'm building may also help me in a little side project I have to port McDeath to rogue trader but we'll talk about this later (for those interested it's on the old hammer forum)

I'm quite happy with the models I've gathered so far (OK, I'm really happy) and I've managed to assemble them in characterful gang/bands/teams/whatever. Some associations may not be as obvious to you as they are to me but I believe the painting and little background I'm building will tie them nicely.

I'm going to start with my favourite gang which is one I've been meaning to do for a long time (actually from when I first got my chubby hands on the lost and the damned book when I was 10).

This one is the typical "good guys" band. The band is lead by a sensei (I've had him for ages and now is the time to get him some action) who has spent most of his looooong life running from people trying to mess with him while trying to fix people's problems and saving orphans from burning buildings. He is surrounded by young and cheerful members who all share his genuine care for others and will do to good.
I will develop the story a bit further and present it later but let's just assume for now each of them has been saved by their leader at some point and that they bear an eternal gratitude towards him for that.
To represent this band I selected "shorty" the ratling so that the band has an abhuman which shows the tolerance of the band and because the model just look cheerful as can be. the 2 adventurers right to the ratling have been selected to add some youth energy to the group. The nerd guy and the 2 cheeks are also here to give diversity to the band. I want everyone to have a special place in this band so I'll keep that in mind when giving rules to them.

Having god guys means you also need some hard guys to throw at them...

I wanted a band of punks and outcasts. I decided to give the band all the weird looking guys I had including a mutant with the "silly walk" trait. Like for the sensei gang, each of them has a great character and the leader will be the scavvy model. I designed him as a former IG officer fired from his platoon for unknown reasons. I gave him a duelist sabre and a severed left arm to make him look tough. I like the idea of him charging with a blade in his one and only arm
Some people may remember I'm a bit One piece fan =>
So now you get where the idea comes from...
This band wil be painted with lots of colors to show the different origins of all members.
A little detail is that I'm going to play Loritta (cybergirl n the left) as a completely dumb cybernetised babe who thinks her gun is the reincarnation of her brother.

Space Roger and his galactic farers.

This one is another one I'm looking forward to paint and play.
Roger Ferrero (middle guy with the conic helmet) is a famous rogue trader who has travelled all across the galaxy to encounter hundreds of new lifeforms, discover new planets, give an end to cosmic struggles and so on...
His story is so great that a tele-vid of it has been made and most children of renowned spires have watched the show. The show has somehow been made in a old fashion way and the romantic treatment of the story (mainly to cover all the secrets invilved about Roger's activities) has made the galactic farers look like a bunch of morons. (think of some sort of galactic bonanza or rawhide)
Roger is the source of a lot of jokes and often serves as a poor comparison. The real Roger and his band though are a genuine bunch of tough veterans who've spent more time in space than any of the people mocking them.
To make this team, I chose all the models I had which had something resembling a space suit. The navigator has been added too because a rogue trader such as Roger needs to have his own trusted navigator. the model looks perfect with them with his pompous look and funny clothes.

Because we have good guys and because all the rest is "between good and bad", we need bad guys too. These will be the henchmen of a sinister organisation whose leading head is unknown (for now). All these guys could eat their own grand mother for breakfast so I won't go into any further details...

Because a man has got to eat, sometimes he has to steal and pillage. That's what these guys believe.

Life has gathered them all and I only gathered the models, they will be a perfect third party in some scenarios.

Do I really need an excuse for getting a brat gang in the ring? They have fancy hairdos, they wear "haute couture" padded armor and they are the worst kind of snobs you can get on the whole planet. That has to be fun to play, don't you think? (I already know one of the juves will be painted like Bily Idol while listening to "flesh for fantasy")

Nothing to say about them apart the fact that you will love to hate them...  bunch of rich arrogant vultures...

I've covered about half of the gangs for now so I'm keeping some for next time. I hope all this lead has brougt some smile upon your faces and if you have any ideas, suggestions, name ideas or desire as to which band as got to be the first to be painted, well, you're just one comment away and I promise I'll try to use them as well as I can.
Publié par Asslessman