Face off - How to start a venator gang for confrontation

OK, if you read yesterday's post, you might have seen some models captured in blue putty to get their faces copied. The mold has been made and the resin has been poured...

But what is all of this about?

Well, if you've ever read the confrontation rules published in a series of White dwarf magasines  between n°130 something and 140 something, you might have come across some of this :

And I am pretty sure it must have left a trace inside of you. It's evocative, it feels crazy and it's full of little details (like staff faces as you can see here).

Confrontation is getting a lot of interest these days and it appears it has never truly left people's mind (amongst those who've read and tried the stuff at least)
This game published directly in white dwarf gave birth to Necromunda and Inquisitor (which also spawned some unofficial but yet very good games likes inquisimunda and many others that enabled skirmish/roleplay in the 40k universe.)
I'm not to tell the story of this game for others have done it before and far much better than I could.

What I want to show you is the gang I plan to build from scratch which is the venator gang.
In the rules, they're described as bounty hunters who purge mutants, psykers or any other problem.

A bunch of sketches by Jes Goodwin were joined in the rules along the fabulous drawing by John Blanche opening this post. As you can see a lot of the design got into the later necromunda redemptionists and Cawdor gangers (GW never truly wastes good ideas).

Some miniatures were even released by marauder but they go for ridiculous prices on ebay. The other major drawback of this series is that it's not a very convincing one. It doesn't capture what I see in John Blanche's drawings.

Getting my hands on the right heads was going to be the main issue from what I could see and I selected a few potential donors. 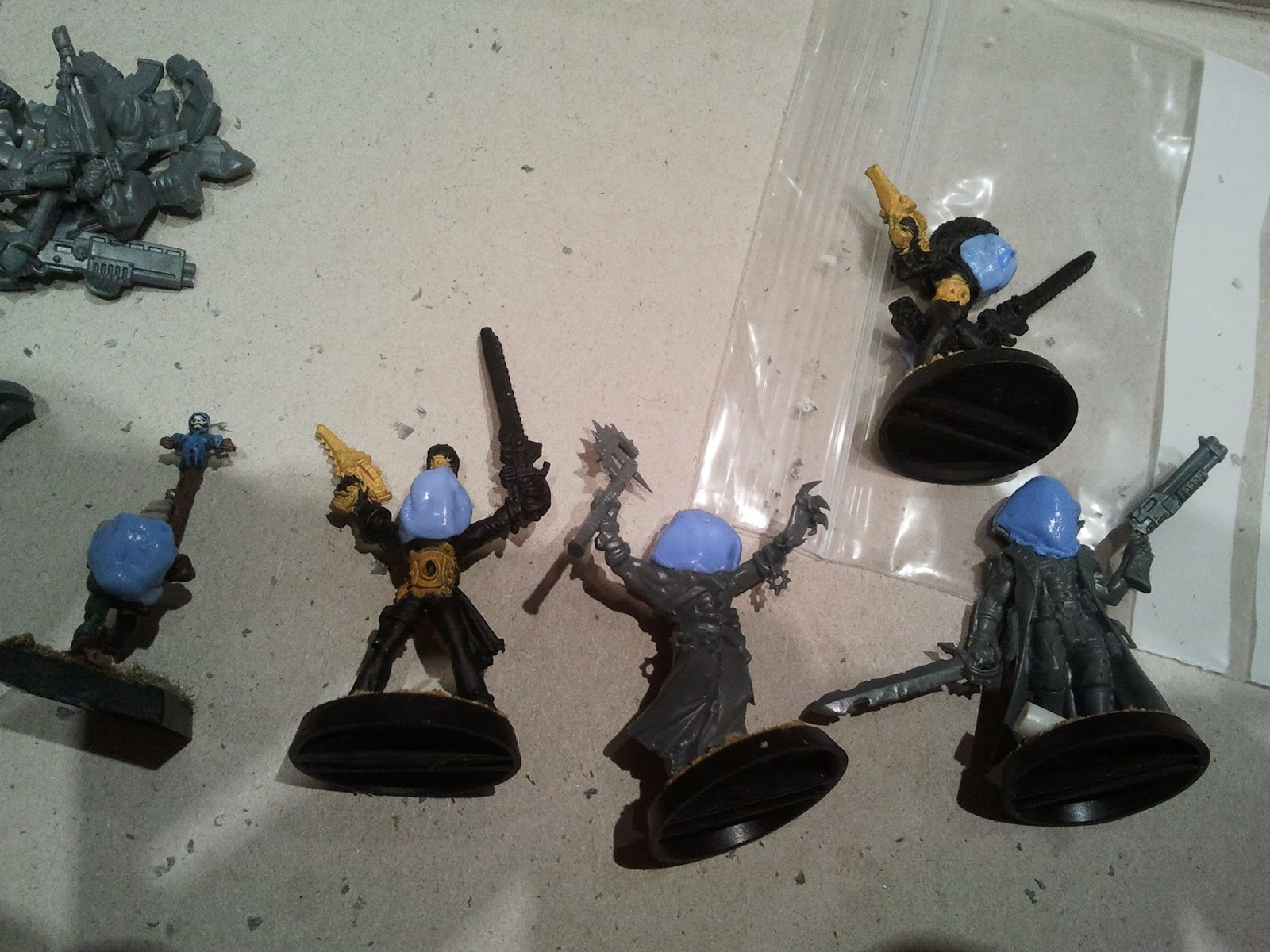 Now you know why I chose these guys.

As I wasn't confident in my casting skill, I raised the question on the oldhammer forum and I got a very positive response from theottovonbismark.

As you can see in his first and second post about the subject, he is coming up with the best version of the JB picture possible. (check out his other projects, I promise you some good time and many brilliant ideas to steal).

with a convincing test model

So how is my own work getting along in all of this?

Well not as good as I had hoped. The first batch was a complete failure with bubbles everywhere and the resin being far too fragile. (first row)

The second batch (second row) proved to be better on half of the casts (not far to a finecast result if you consider the bubbles...) but one of the models got serious troubles and I accidently broke the mould (good bye Lucrezia chest copies...) 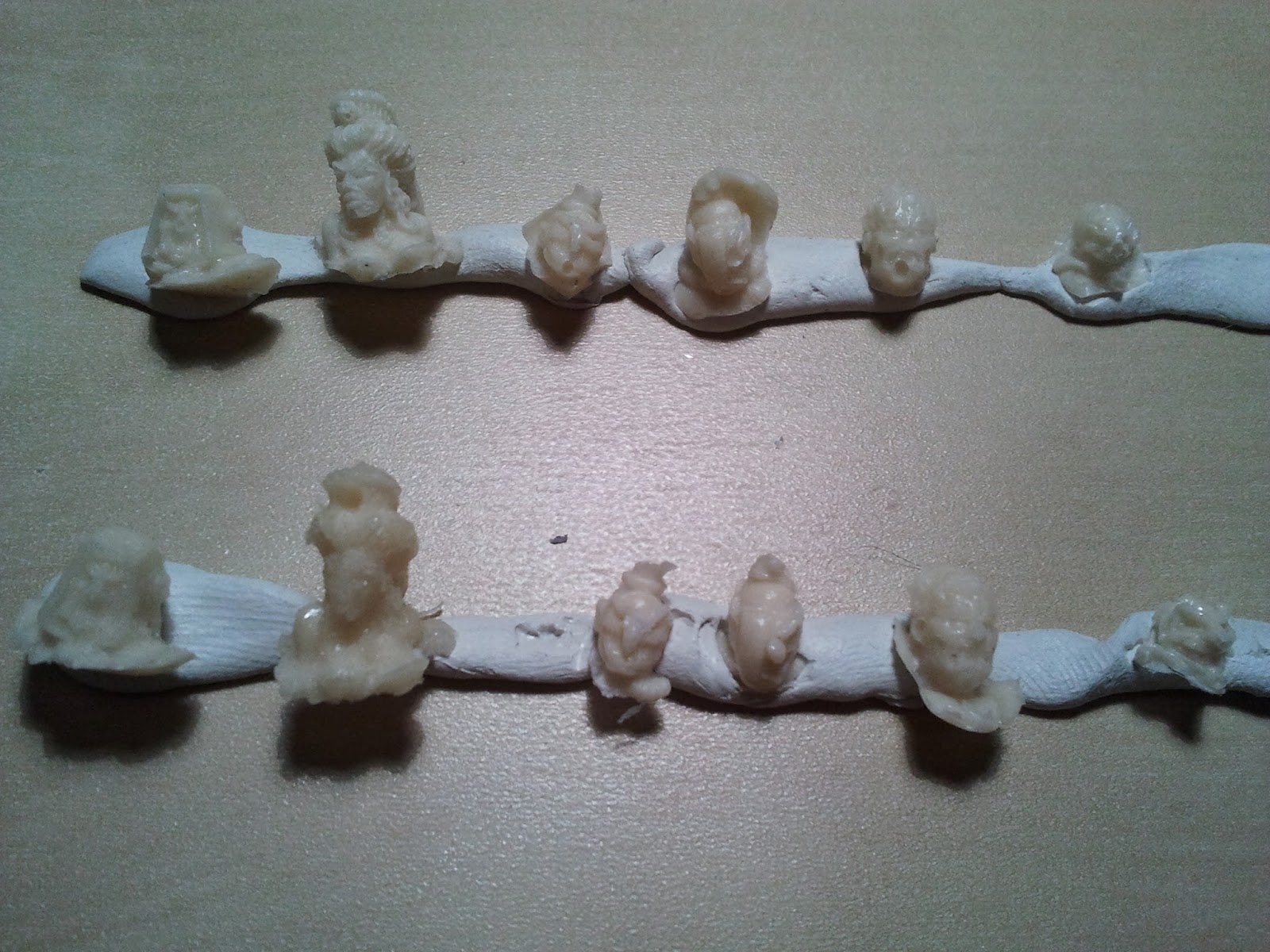 The result on the last 4 of second row are good enough to try something with since they just need some little putty here and there. Mots of the piece will be filed anyway to fit on a normal head.
I'm relly pissed it didn't work for Lucrezia because I actually already made a good replication of it before to make a female vampire : 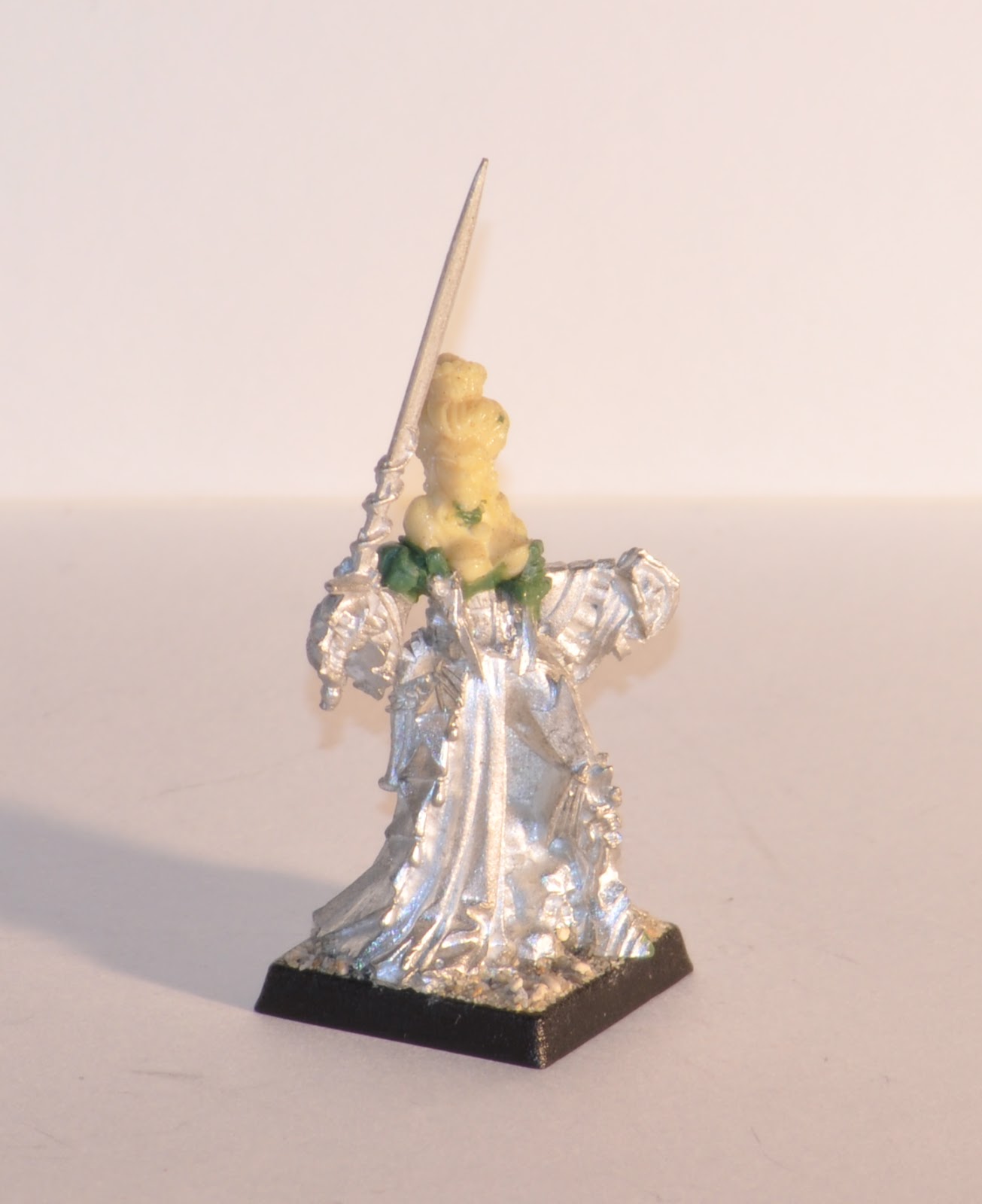 I blame the poor results on the resin. The bottle says it lasts 3 months after first opening and that it should be stored between 15°C and 25°C. My resin has been opened in 2007 and has been kept in the garage where temperatures must have come close to 0°C... The unused resin that cured in the mixing pot had a weird texture like I had never seen before. My bad, next time I won't try to use overaged resin and maybe it will keep me from ruining molds...

to sum up what I've learnt :

Once I have all the parts but the heads, I'll make a plan on how I'm going to build this and how I want it to look like. There is going to be some kitbashing but also some heavy conversion and sculpting job too (the hardest being done by theottovonbismark). I want to take my time to do the best job on these.

After (or even during) the creation of this gang, some more gangs will follow but built from existing models I've gathered here and there, mixing old references (some from the first rogue trader release) with soem very recent ones (Imperial guard still has some great models hidden even if the scale is not right)

On a side note (you have to occupy yourself when resin cures) :
I also started throwing some Green stuff on the grav-attack (with heavy Ian miller influence in mind) and some glue on pieces I've just received... 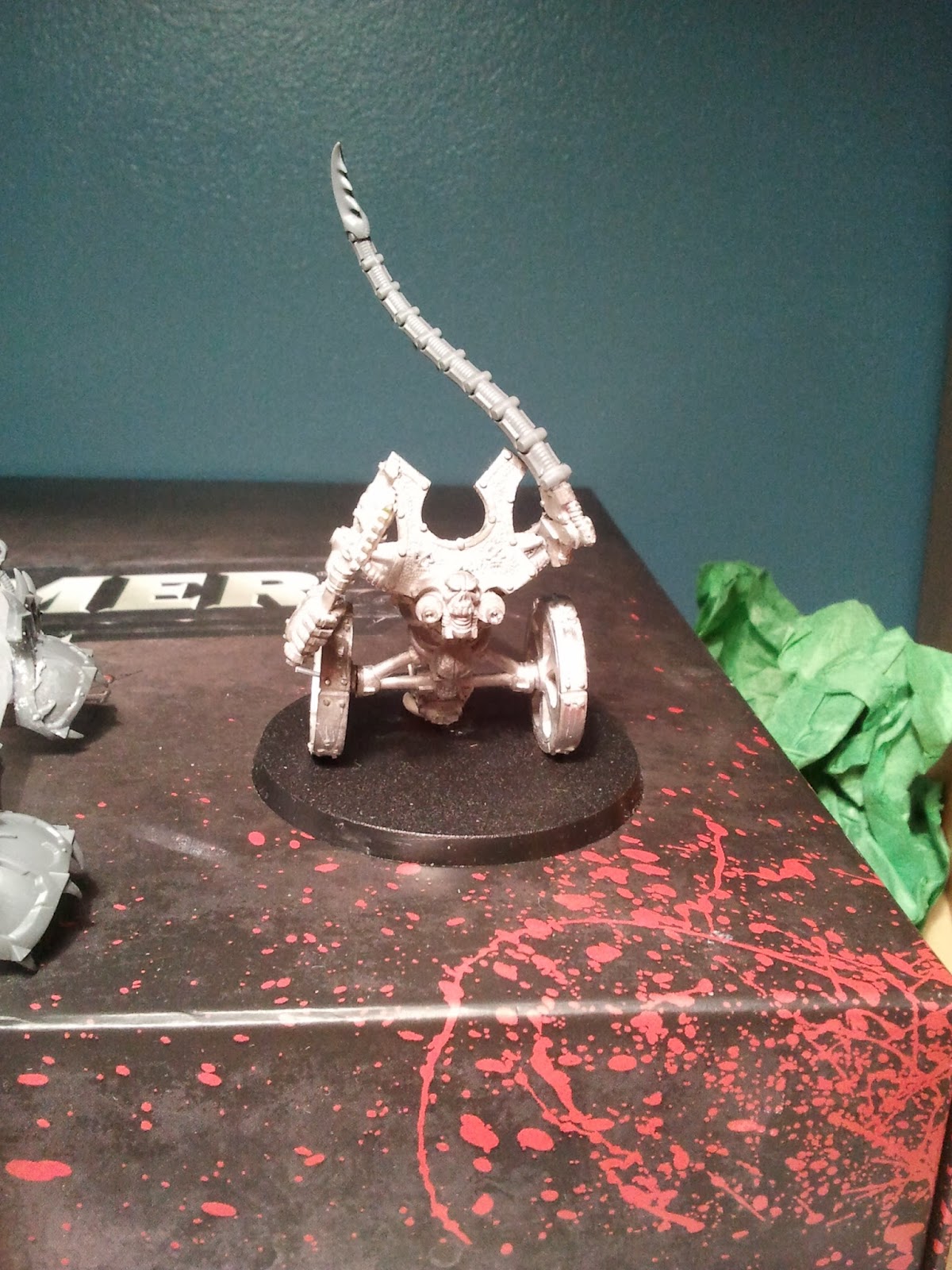 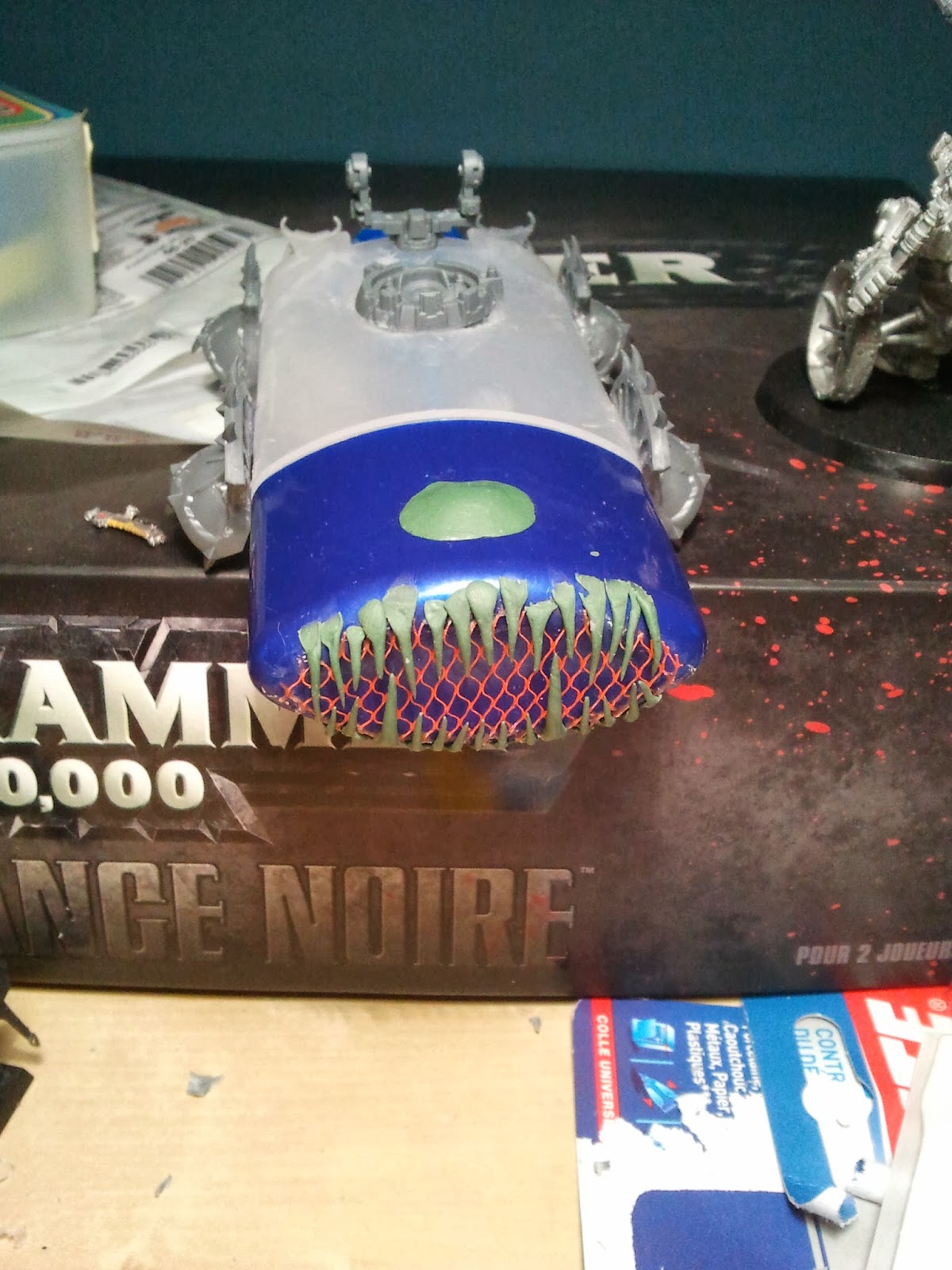