...where a father of 2 gets back to playing 2nd ed Dungeon and dragons...

You may remember from a while ago that I am a natural born Paladin. You may even remember that the paladin model I was using 9 years ago couldn't do the trick anymore... 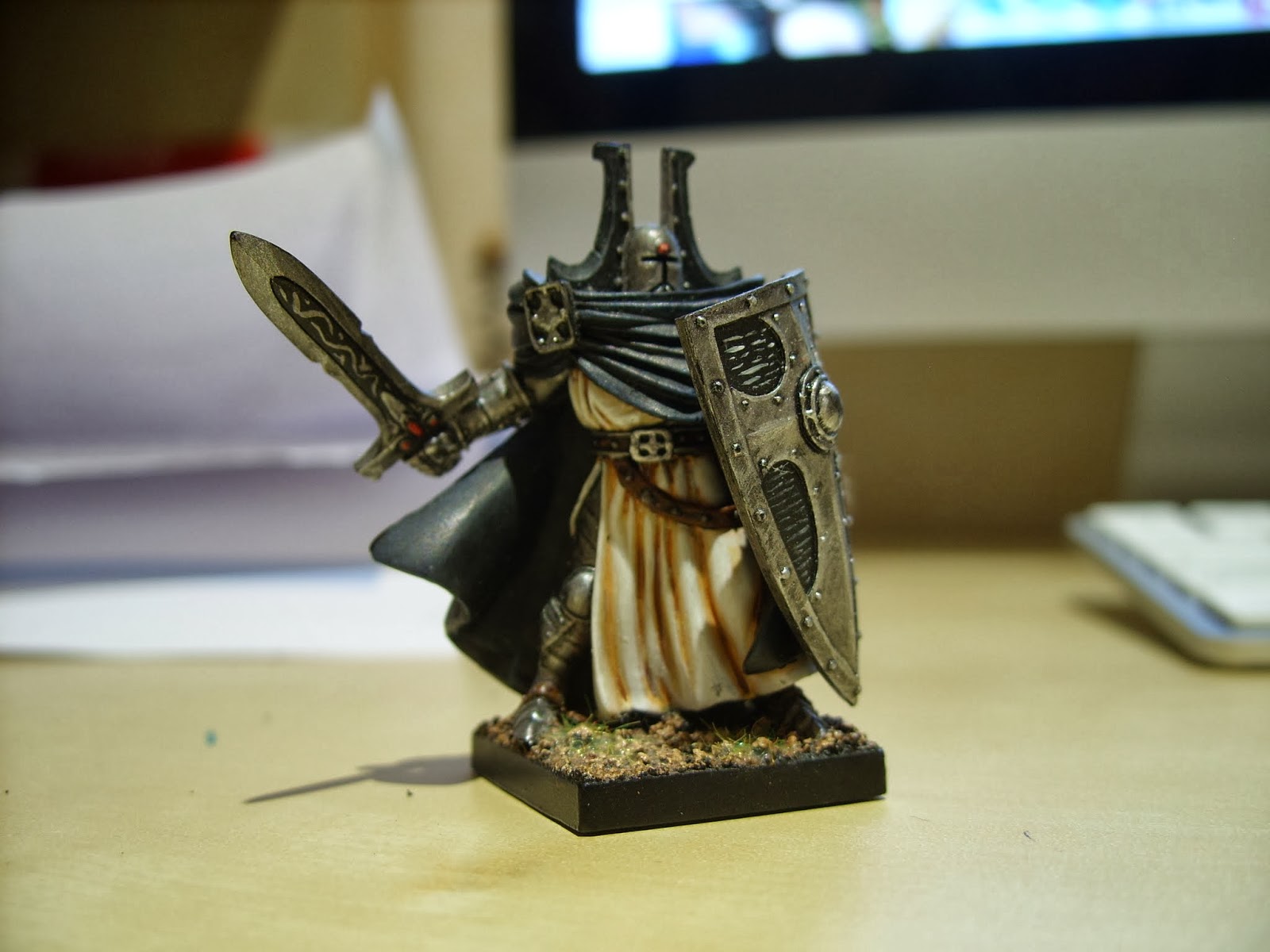 So good bye Seu, you have found the limit of your 32mm... it is time to let the old guard in : 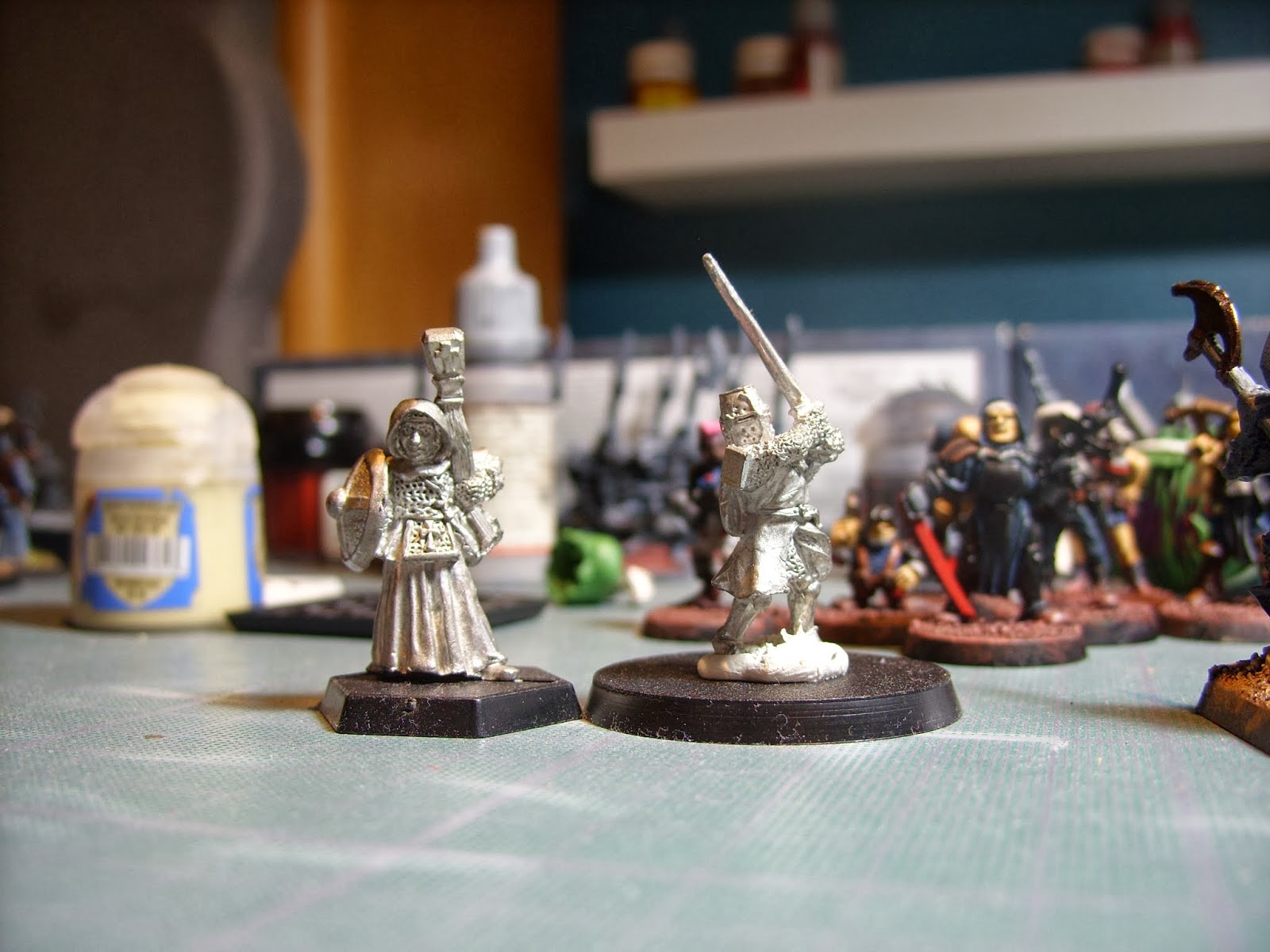 You may have recognised the model on the left is the cleric from the adventurers starter set.


But let me tell you about  THE QUEST FOR THE ABBOT'S CHEESE...

Here is the little pitch wrote by our DM about it :

"In a monastery near a small town an ancient tradition exists - the making of the Abbot's Cheese. Once a year this finest of cheeses is produced within the walls of the Holy Order of the Lady of the Lake monastery, and used in it's sacred traditions. This year however, the cheese has been stolen by an evil-hearted halfling thief!"

We have started this little journey with Seu Antheus, sent on duty to retrieve the Abbot's cheese who has caught the halfling thief, Bufo the black Hood. The problem is that Bufo has hidden the cheese where it has been collected. Seu is forcing Bufo to take him where he left the treasure.

Sir Seu Antheus, lvl 5 Paladin of the Holy Order of the Lady of the Lake

Seu is a tall and quite handsome paladin with quite a monomaniac point in life : Serving the Lady of the Lake. His will do to good will most of the time blind him to anything else. Though he is undoubtedly a charismatic and reliable person, he has been raised as a knight in a paladin boarding school and he has yet to learn how to avoid awkward situations due to his poor choices of words... (played by your servitor)

Bufo is an evil halfling and he maybe the closest thing to a black hole on earth considering how small he is and how black his heart is... Hopefully most of his evil energy is spent on eating and picking Seu whenever he gets the occasion... (Buffo is played by Captain Crooks who happens to be our estimeed DM)


On their way, Seu and Bufo encountered a spell-sword named Rambulge and a lone ranger named Robin. The 2 of them offered their help to get rid of the goblins raiding the villages around and this led the newly formed party to the entrance of a cave from which the goblin raiders seemed to be coming.

Robin likes nothing like the open air and the quiet beauty of nature. He suffers the presence of like minded companions but he truly shows his best when left alone in the wild. His instinct of hunter and his cool temper are gold assets for the party (played by Penddraig).


Rambulge is a spellsword who left his village after being accused for a crime he didn't commit. He certainly has in courage what he lacks in self-confidence. His heart his gold and he wants his actions to show it to the world if not to himself first... He is followed by Lemmy his faithful toad familiar. (played by Count Von Bruno)

Scouting at the entrance of the cavern, the party has managed to lure some of the goblins and their Orc master out by placing some cheese and provisions at the entrance :


The orc proved a hard opponent for the party because of his evil magical whip and solid scale mail armour.
For their first fight as a group, the party realised that teamwork would have to be learnt the hard way and they knew far more was awaiting them...
The smell coming from entrance of the cave left no doubt about where the cheese was...

Into the cave, The party found a deserted place which lead to a store room at the very end of the cave.

In that store room, they found the body of a man which was on the verge of death. The paladin laid his hands on the poor man who woke up and presented himself as Bari, Clerci of Jordann

Bari is a Cleric of Jordann, the goddess of love, I mean LUUURRVE, y'know, sweet luuurve. Every move he makes and every word he speaks is filled with passion and smoothness. When Bari starts doing his magic, the temperature rises and the air starts to taste like sugar. (Bari is played by oldhammer star Gaj from the excellent Warhammer for adults)

After saving Bari for the time being, the party discovered that provisions and food were leaving the store room like carried by invisible beings to the deepest part of the cavern... there was definitely magic at work here.
Using Bufo's incredible sneaking abilities, they discoverd the remaining path led to the chamber of a giant ogre magos. Bufo's spying activities unfortunately didn't  stay unnoticed and the magos sent some Hellhounds after the Halfling. The crew unprepared as it was suffered some heavy casualties from the encounter. They had to work as a group.
After making some preprations and even considering using some home made molotov cocktail : 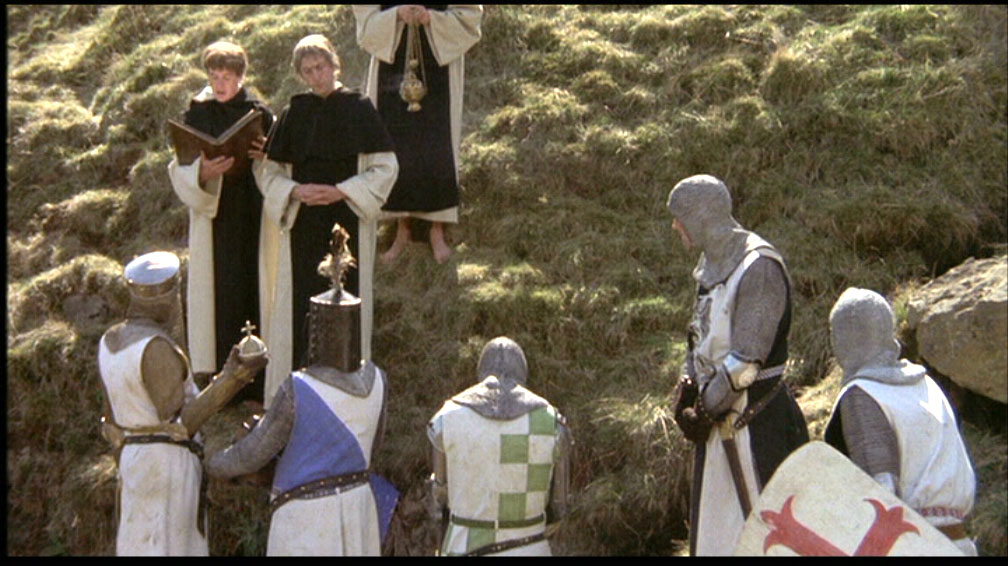 The party decided to look for a better plan, Since magic was at work, they got Bari to check for any trace of unwanted spell or illusion.
It turned out Bufo was under the charm of an illusion and that this illusion had made him steal the Abbot's cheese in the first place. The party got rid of the ring that was keeping Bufo under the illusion and they entered the ogre's cave :

The paladin smashed the door open and used his own body as a shield to protect his companions. Bari the Cleric cast his prayers on the group to boost them and the ranger and spell sword started shooting at the Hellhounds and Ogre who were awaiting them in the room :

This time, the party was clearly more prepared and the consequences showed rapidly. The fight was won with glory thanks to Rambulge's idea to cast DAZE on the ogre, preventing him to cast another deadly bolt of lighting at the group !

Like after any boss, the companions looted the entire room and took everything they could, (like good murder hobos...) But their victor didn't last long. The door that could lead them further in the cave was protected by a goblin faced knocker :

The only book about cheese they found in the ogre's bookshelf was a funny one :

There had to be a hint n those pages but reading through most of it didn't help. The party tried nearly half the vocabulary they knew until everyone abandonned...
Bufo came back from the store room from where he had gathered some food he kept for hismelf. After being asked in a polite but firm way by the paladin, Bufo handed some of what he had got :

The answer had been right here under their nose for all this time ! The paladin quickly stuffed the goblin knocker's face with some of the Nouveau Oriolles Taupinière cheese and the door opened !
They were clearly nearing the end of their quest !,

A few steps away from the goblin door, they found a quiet room filled with light and what appeared to be a treasure in the centre :

Though the room was quite welcoming and didn't feel dangerous, they got Bari the Cleric to look for any traps with his magic. They were right to do so since the magic revealed only one path was secure :

Seu and Rambulge went ahead to check the iron grilled door at the other end of the room but when they arrived midway, their feet got stuck on the ground an they could not move any longer!
With this, the form of a mouse appeared in the centre of the room where the treasure illusion had disappeared :

The mouse presented itself as being Waldemar Cheesethrane and as any good villain, it exposed its plan to conquer the world in front of our heroes! Every problem they had had lately was Waldemaar's doing. From the theft of the Abbot's cheese, to the goblin raids, even Rambulges' exile from his village was Waldemar Cheesethrane's fault! The Abbot's cheese was no more because Waldemar had transformed it into a magical gem to use its divine power.

Before any of them could move, Waldemar invoked Malthazar, a steam elemental with his retinue of steam imps. Now I'll tell you something... Fighting elementals when you don't have a mage in the party is really a BAD idea, steam elementals would have got their steamy ass kicked in no time if we had meen able to cast frost and ice at them but we couldn't, we had to endure steam shower ater steam shower, using healing potions and laying of hands whenever we could to stay alive.

Hopefully, the party understood that part of the binding spell was due to the strange staffs in the room. By breaking the jars filled with mana on each pillar, the party lessened the effect of the spell and managed to kill the remaining imps.

The companions were all severely burnt after that and though they took the time to heal the best they could, they quickly followed Waldemar...

The Mouse was  leaving through a strange portal and it invoked a mighty demon before doing so. Bufo (who was once again sent to scout the area first) came back with bad news to the group : they had to help the demon with personnal matters or they would just be sent into the depths of hell...
After an hilarious moment of roleplaying from Gaj, Bari the Cleric managed to solve the demon's sexual troubles and erectile problems. The demon in return granted the party a wish. The wish they made was to be sent towards where the mouse had left....

At this point the companions have been sent to another dimension but this part of the quest is still running.
I cannot emphasise enough how fun this quest has been thanks to all players and to the tremendous work (and drawings) by our Dungeon Master so I really wish to thank them all.

I tried to stay very factual because the jokes and silly situations are so numerous it would be impossible to tell them here without breaking the charm. There has been some very excellent roleplay here and all characters are really full of charm

If you have some time and you want to see a very nice and to,gue in cheek story take life, I strongly suggest you read the quest as it took place on the forum. All non-funky bits (like battle stats, player's actions and games mechanics) are hidden by spoiler marks so that you can only enjoy the roleplay part if you want to. Reading some of the quest notes will be very intersting to those who have already played DnD and want to see how to do it via a forum for example.

The next part of our adventures has taken the group to another dimension and we may have gained so new friends in the process !

I'll tell you about it when the party has moved on a bit more (and when all our characters have their models ready).