Over the oldhammer forum, there has been a challenge launched to build Warbands in the most oldschool fashion. The idea was simple, each contestant rolls a warband and gives it to the Challenge Master who randomly assigns them between all players.

You may have already seen Erny's warband start so I felt like showing you how I'm going to do this :


From what's above you can see that Mr Phreedh (who rolled my band) felt no remorse from rolling a huge band to be done in a month and a hal...

SO... Starting with the leader of the unit, we have
- a Slaanesh evil wizard
- short legs and silly voice
- spits acid

For the short legs part, I knew I just had to reduce a normal pair of legs to get it so I started using plastic zombie parts. Having short legs felt creepy so I enhanced this trait by giving a bent position, almost crooked, to the model.

Then I started looking for a head and I met this part which had been lying in my bits box for quite some time :

This was a revelation, what I saw in that piece was a mixture of all of this : 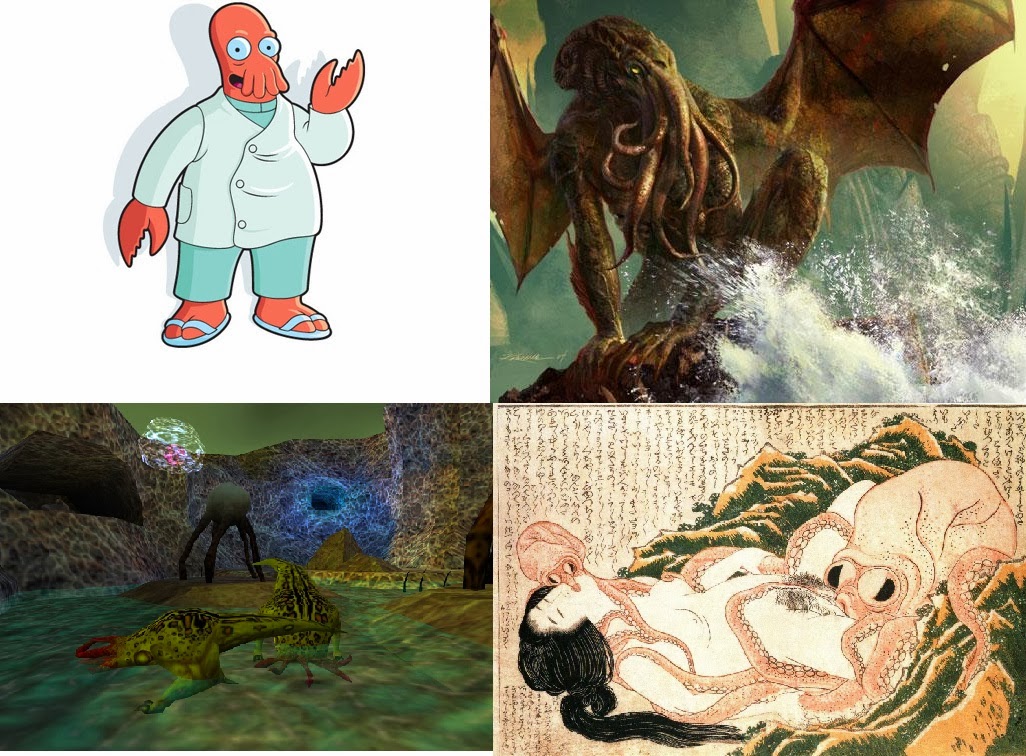 No doubt a character with tentacles on the mouth will have a silly voice ! The octopus also reminds of Cthulu's head and as Cthulu is the world's undisputed most badass villain in all history, I had to use it. The tentacles also reminded me of the Half-Life Bullsquid (what an annoying alien) and about a drawing from Japanese artist Hokusai (can't be more Slaanesh than this!) 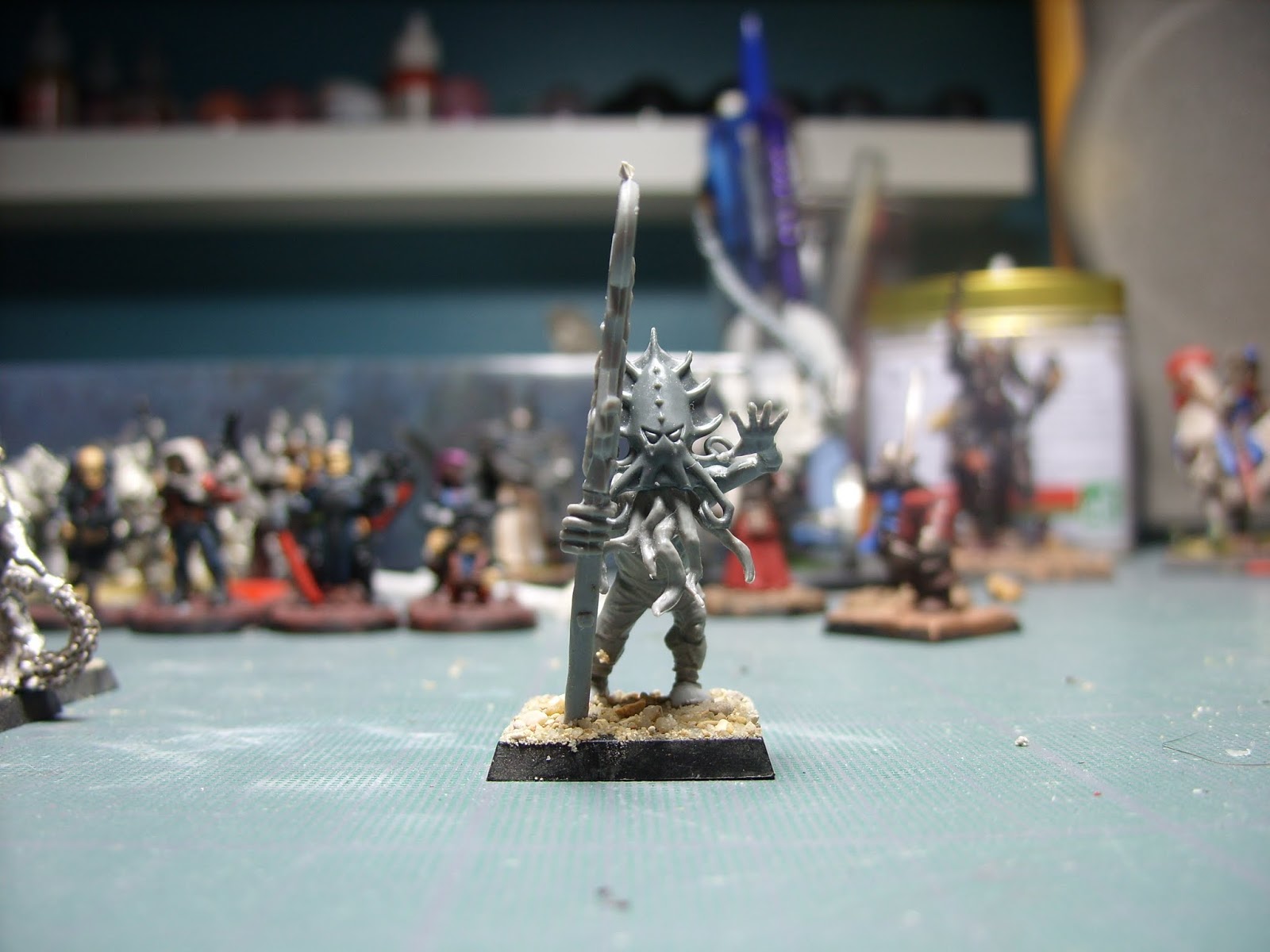 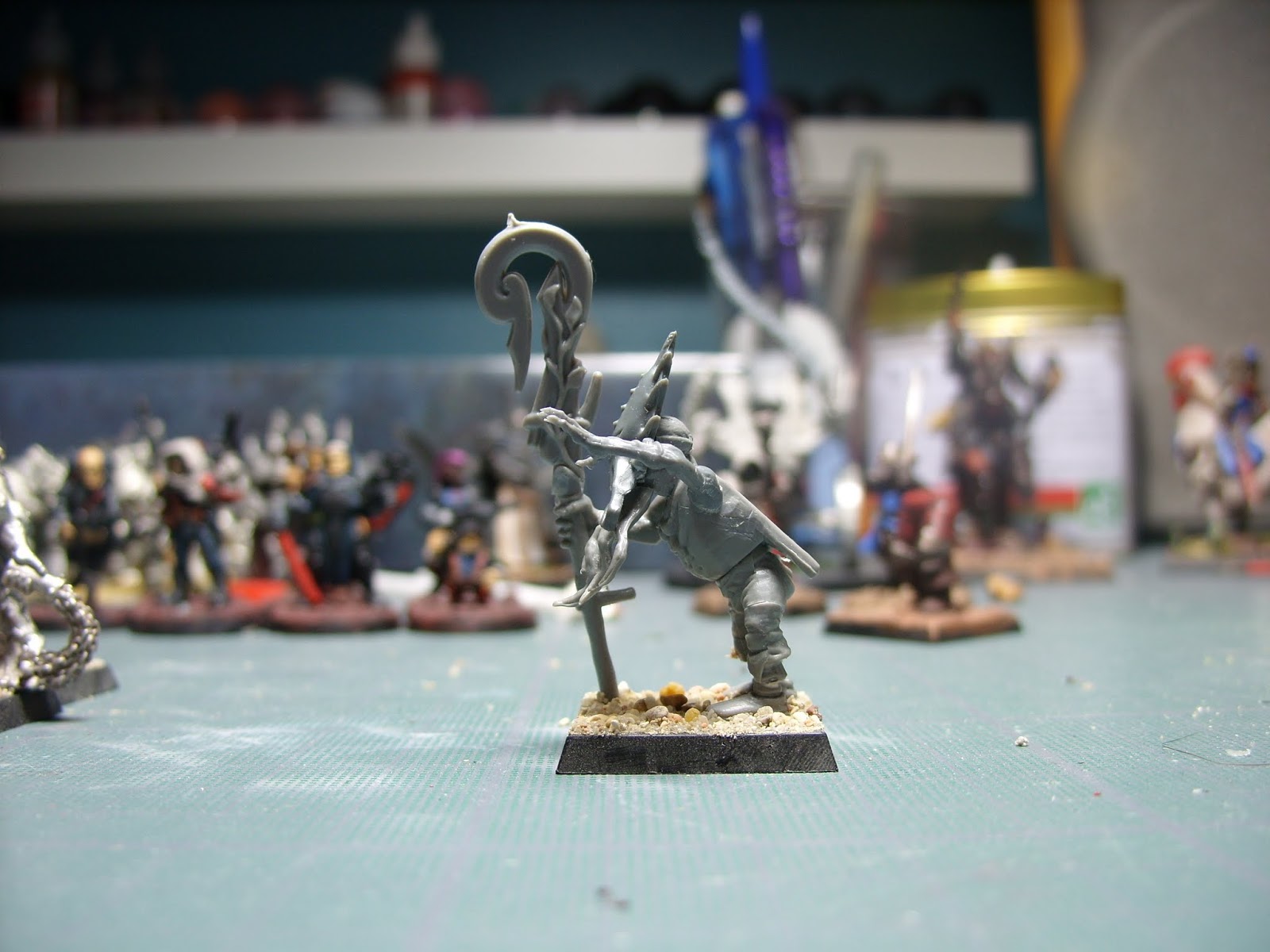 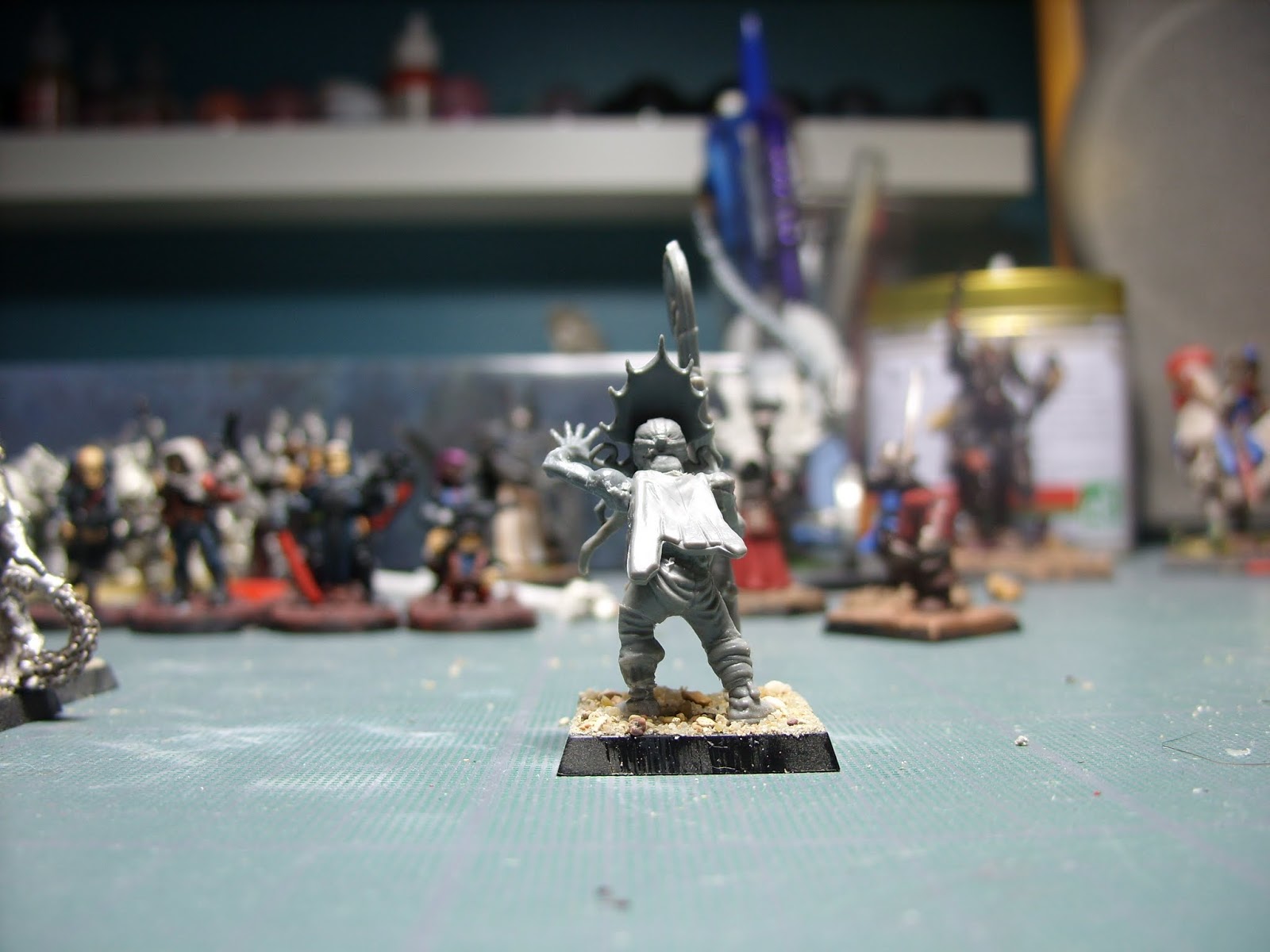 The staff will be painted like it's made of coral to keep the "deep sea" feeling. I love the cape behind him, it's too short so it looks ridiculous but after all he is just a level 10 wizard !

For the cultists I had to struggle to find 12 models in my leadpile. I decided to mix models I would never have mixed normally :

First, I took some of the red redemptionits I had left which is the best way (the easiest at least) to represent chaos cultists. I got them from a joblot for not much and the standard bearer was already damaged, nothing which can't be fixed though : 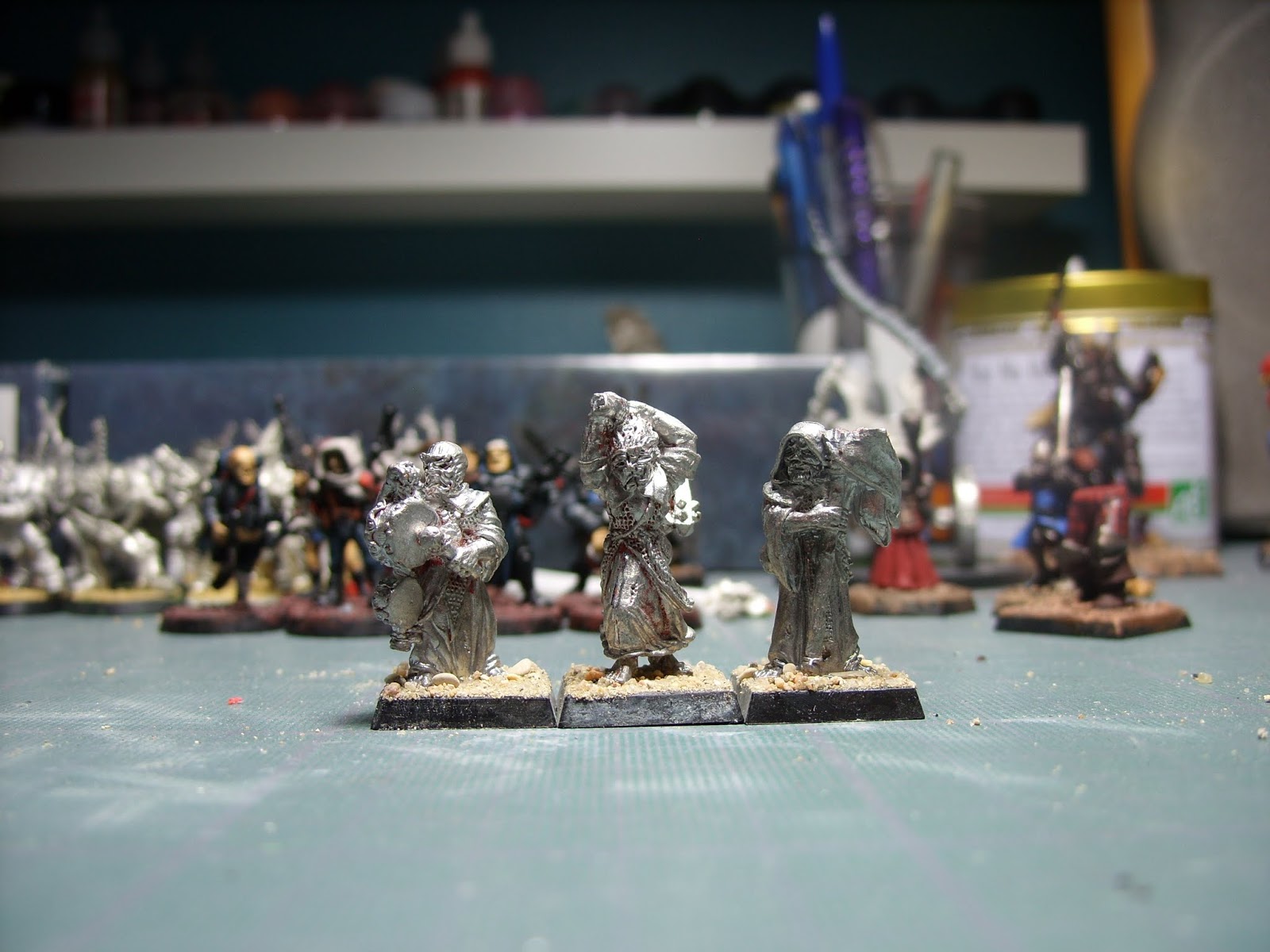 2nd choice were those 3 marauder flagellants. I have to say that I hesitated a lot using them since they are so bulky, their heads are enormous and they don't rank easily but I like them and I need them to get to 12 models. I hope once painted they blend a bit better in the unit... 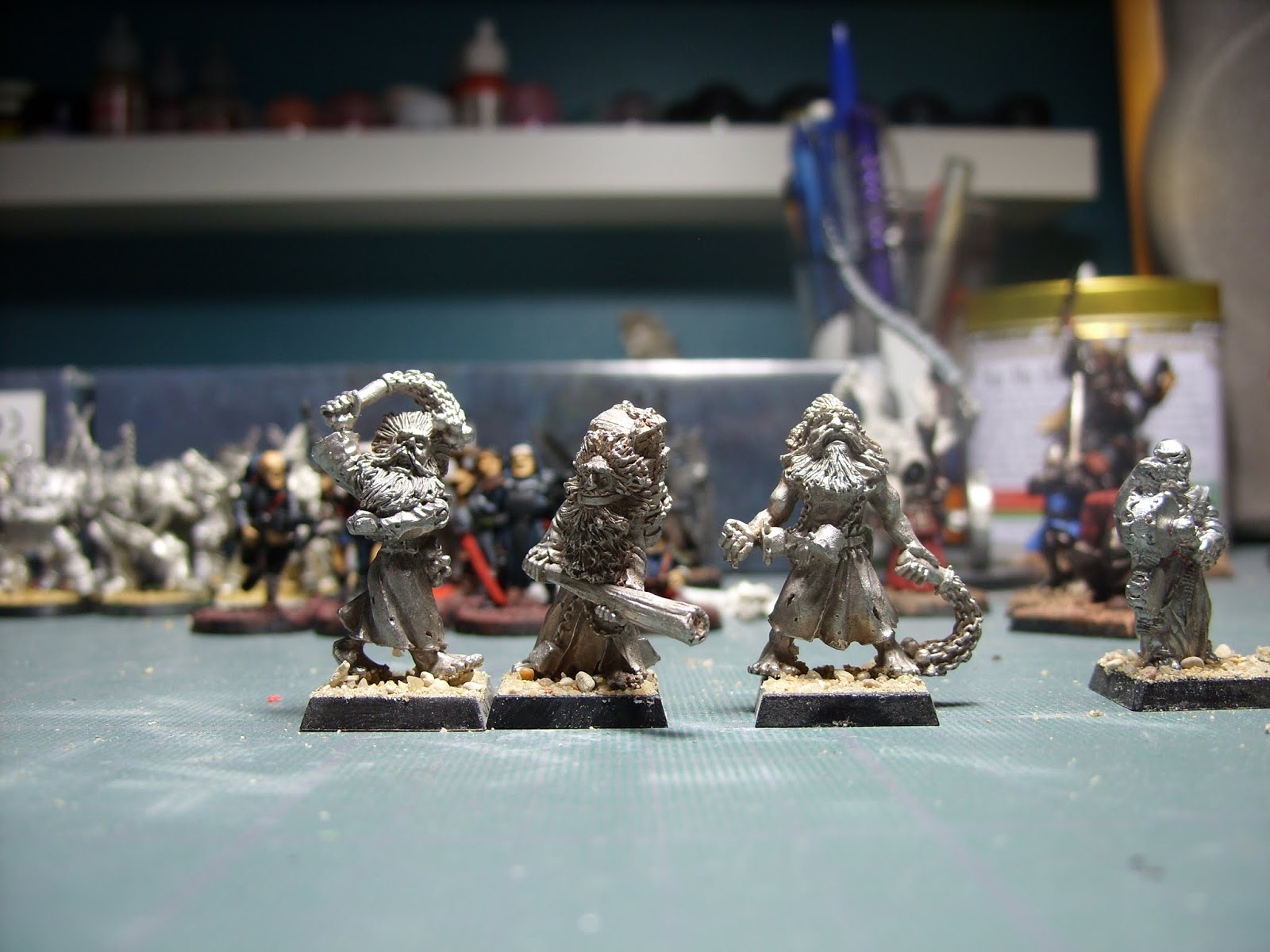 Last 6 were some 40k cultits I 've had for ages. I bought a truckload of them when they were released so I selected the easiest ones to convert. This will be the 3rd time I'm painting them. They are very nice models, very finely sculpted and elegant I think. I've cut their guns and tech weapons and I'll keep those for my confrontation gangers.
Here, I've just replaced the arms with plastic marauder arms and plastic beastmen shields : 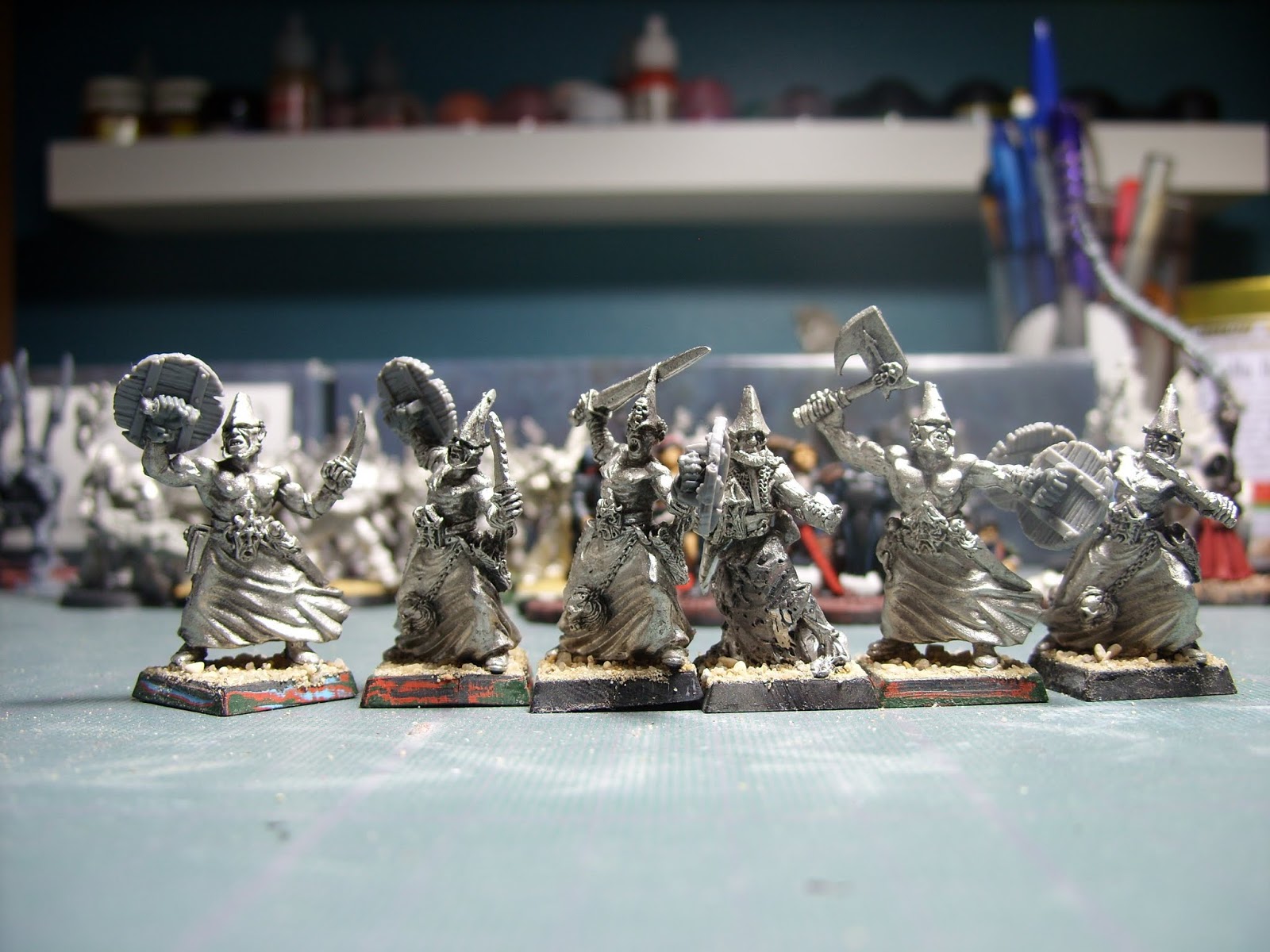 The whole unit looks quite nice and I'll have to write numbers under their bases because there are not many ways to rank them... 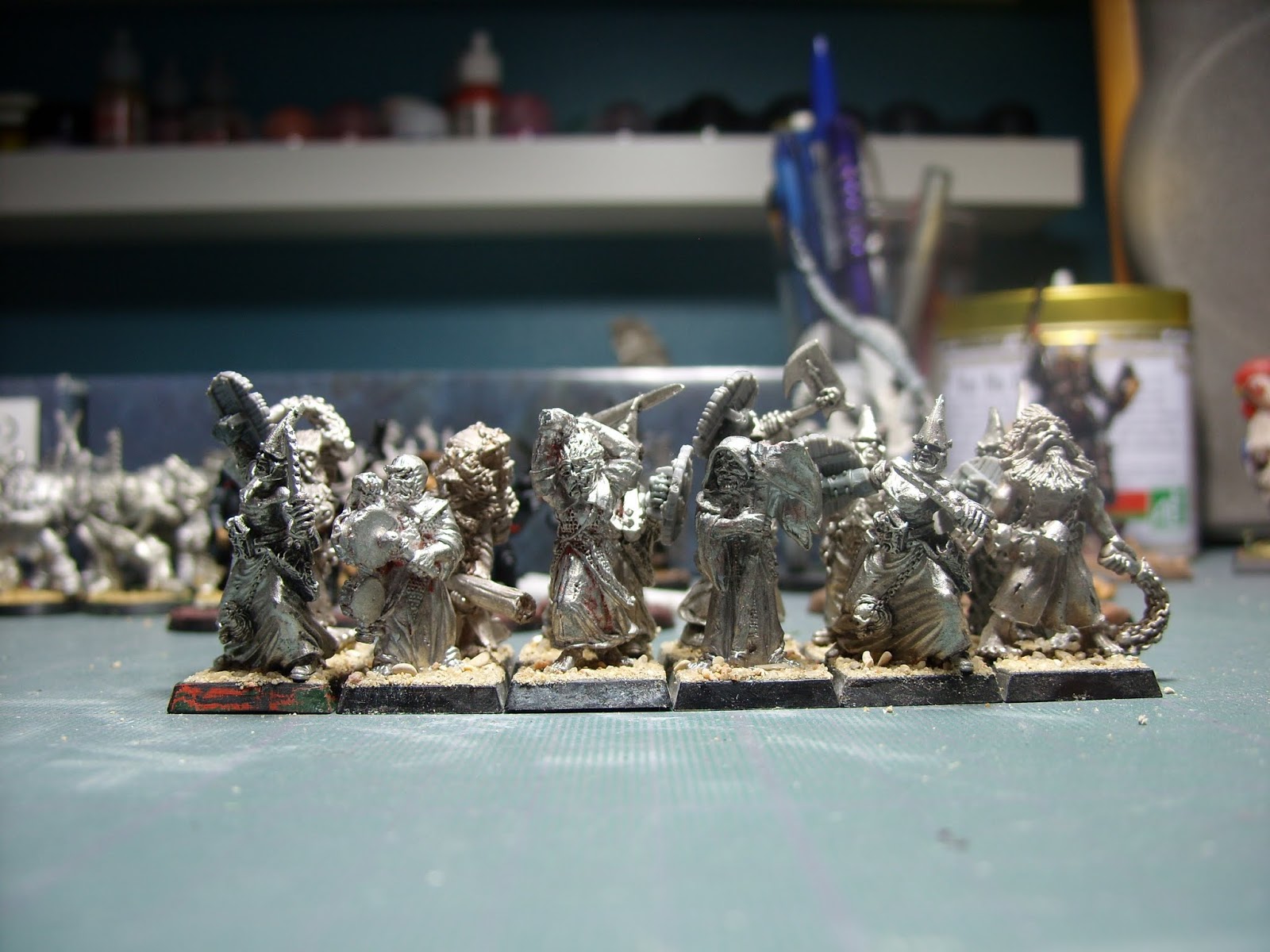 For the darl elves bearing crossbows, I had to cheat a little...
I don't have any dark elf model (apart from a rider which is impossible to convert - see in the trades section) and the very few high elf models I could have used didn't fit what I wanted.
I then remembered that I have this big "battlemasters" box from which I can pick things and which just happens to have... IMPËRIAL crossbowmen.

Since I recently beheaded all the marauder archers from the very same box, I'm quite confident in my beheading skills (being french helps for this). Some plastic wood elf archers after that, TADAAA! 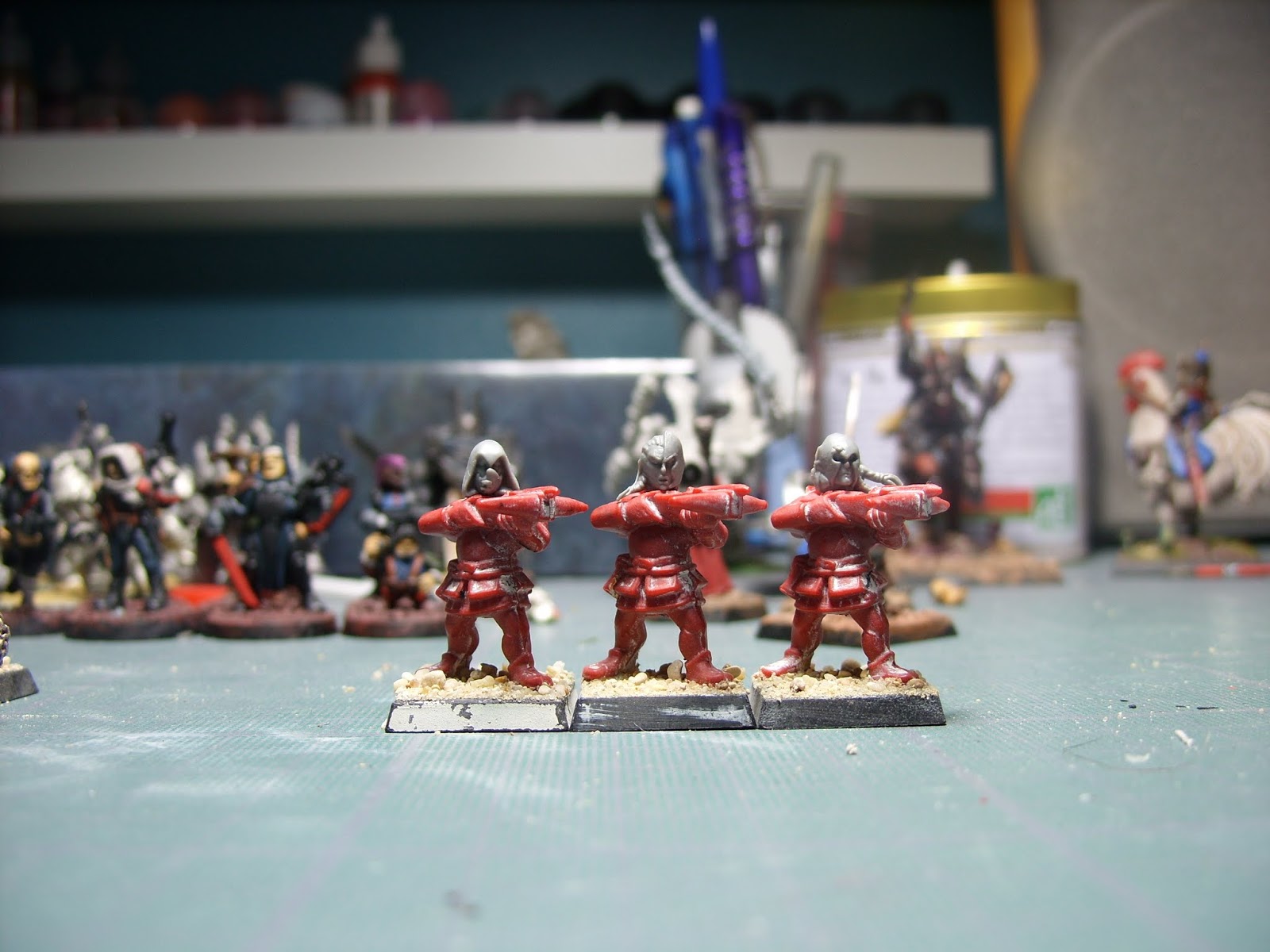 I know they look a little small but this is not a problem for me. I will probably consider them as very young fighters or teenage warriors abducted by the leader and raised as bodygards (and maybe more...)

So that leaves us with the 2 minotaurs...
I have to say tis one was not the easiest one. I do have Doombelow the warped (upper right corner below) in my leadpile, waiting to be painted but you see I didn't see him inthe band andthe other problem was I only had one.

Another thing is that what was rolled is a pair of minotaurs, not minotaur champions or lords, this means they should look a bit more like this (these are 25mm bases) :

So basically I had to build bulky beastmen. Since it's a Slaanesh band, I can quit the bullfaces for more goat-faced creatures. I took a centigor half I had from a lot and a plastic beastman and i just placed them on plastic chosen chaos warriors to make them bulkier and taller and I think it looks rather nice. 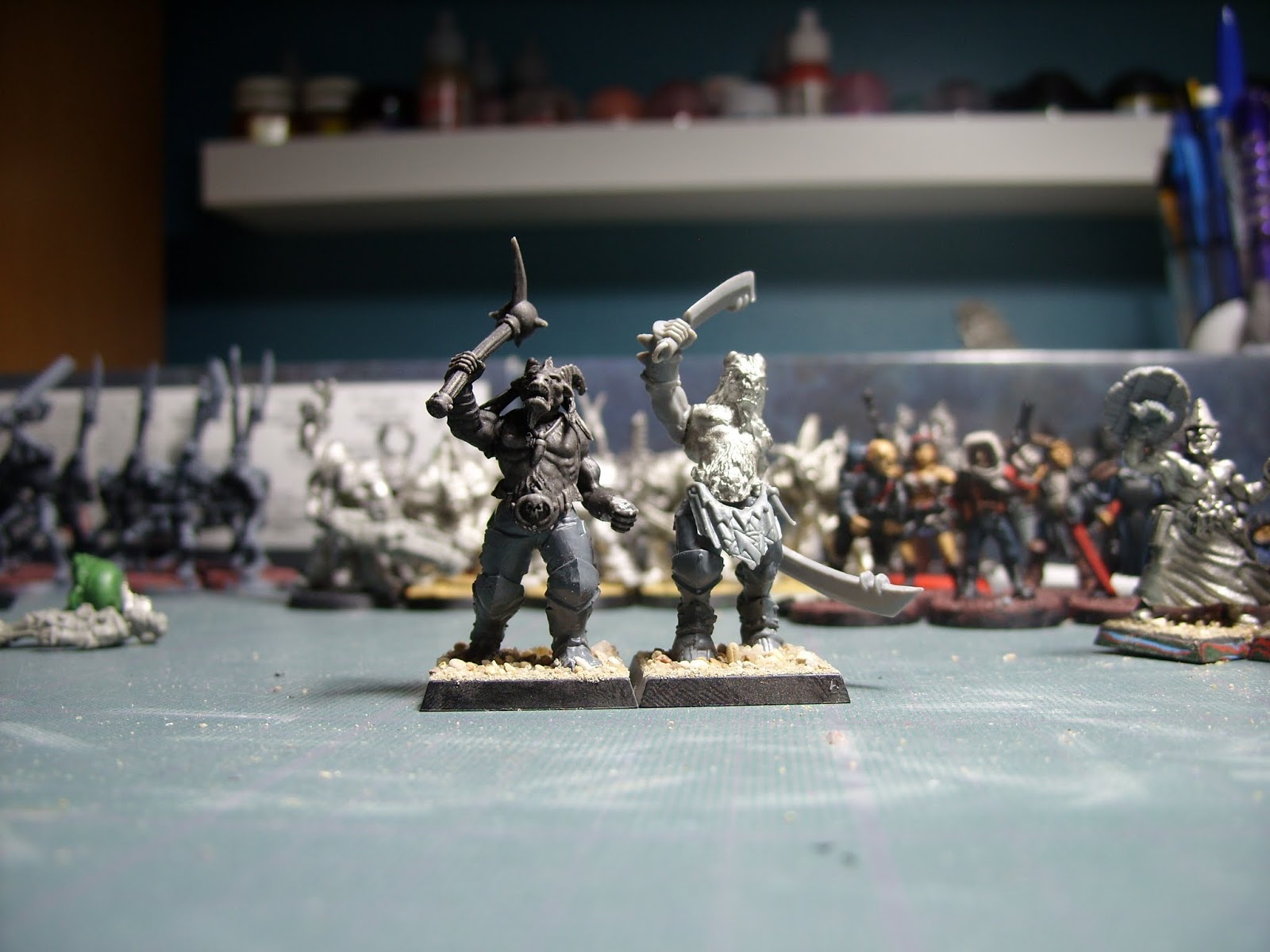 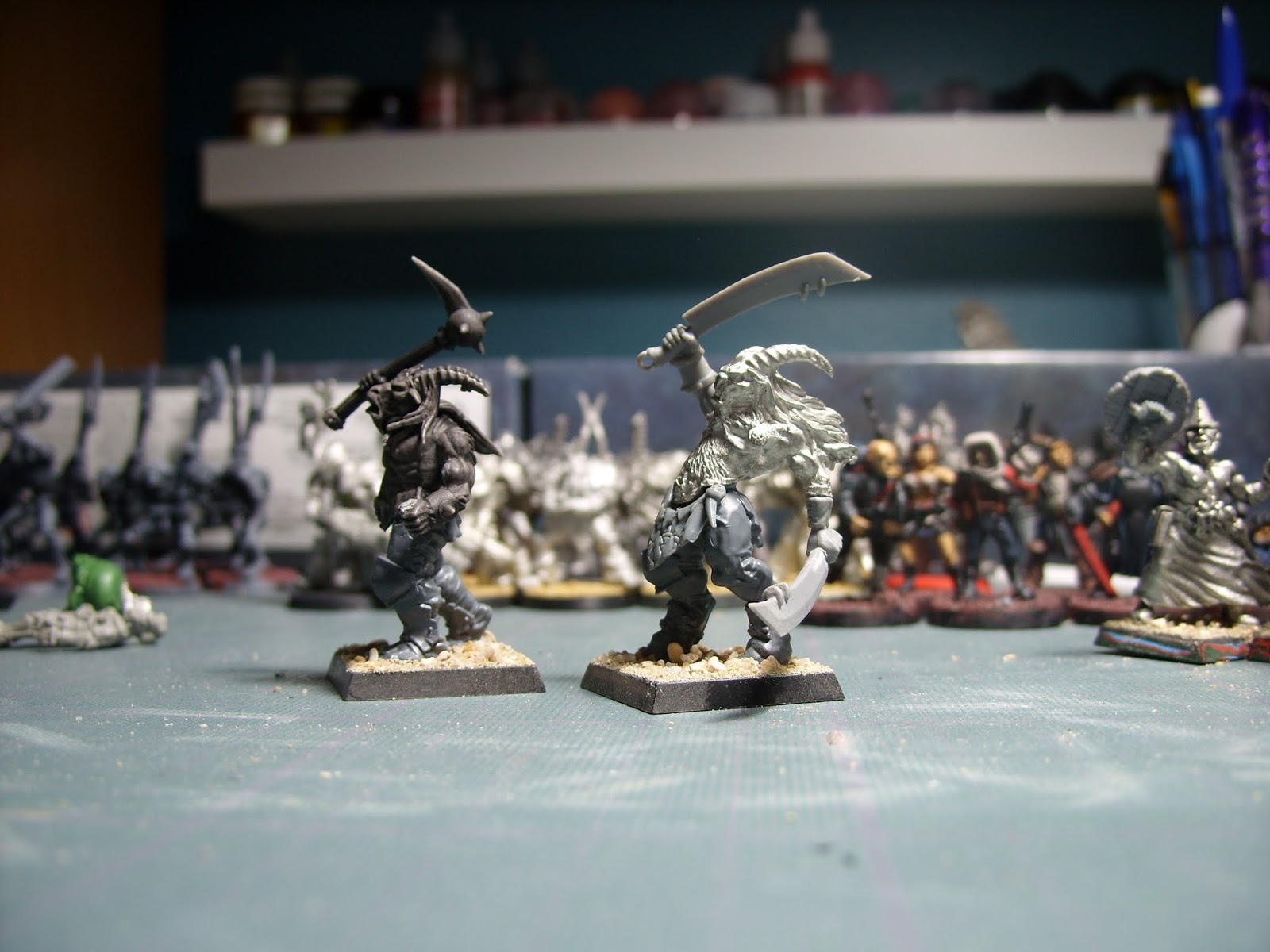 I am very happy with the band so far and I managed to build it in 2 night sessions without buying anything. Now it just needs greenstuffing where needed to hide the conversions, which should take another night. Basically at the end of the WE I should have them all preped and primed to start painting. This leaves me 5 weeks to paint them all so I 'll have to find shortcuts and ideas to make it humanly possible. You have to remember that both winter and spring are coming so that basically means 1hour per week will be lost for painting in favour of Game of Thrones and some WE time will be lost to mowing lawn and gardeing... 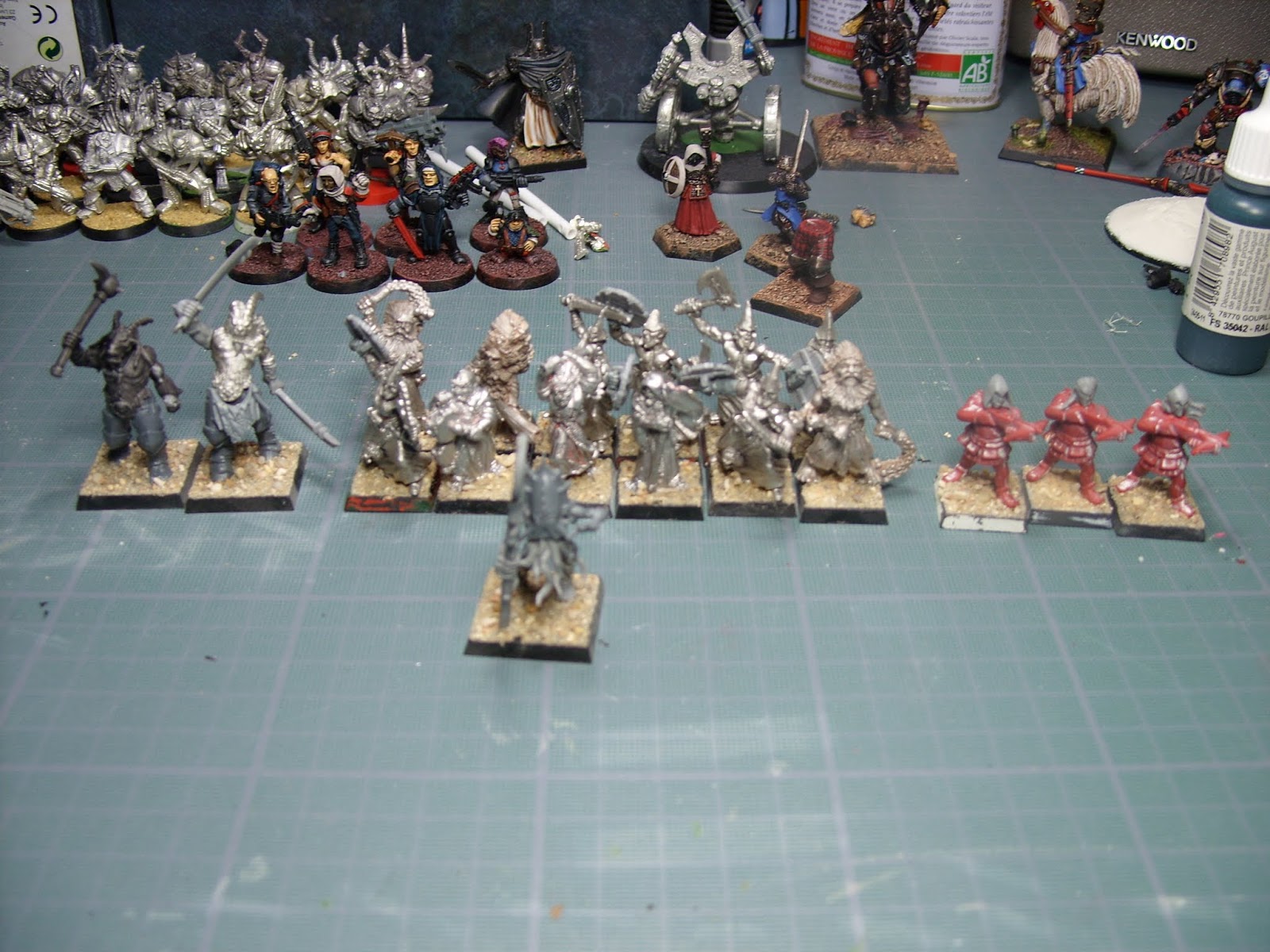 You can see in the pic above that the sensei band is nearly done, just like the cleric and paladin from the adventurer starter set are weel advanced too so expect finished models soon.


Oh and by the way, I won my second prize at the local hobby store, another 5€ in the bank which makes 10€ with last month's prize !
I've already placed another entry for March so we'll see about it in 2 weeks time...