Building Venators : A journey from Laserburn to Necromunda via Confrontation

A little warning before you start reading, this post is going to be a bit lenghty so you might want to get yourself a drink and sit properly before reading.

I've recently tried to gather all the information I could on the venators to capture them the best I could. I need to have a clear vision of how they were portrayed in the designer's mind to see what I like in them and how I can make my own interpretation.

My main source of inspiration will be the confrontation rules published in white dwarf in (information below taken from LEXICANUM). 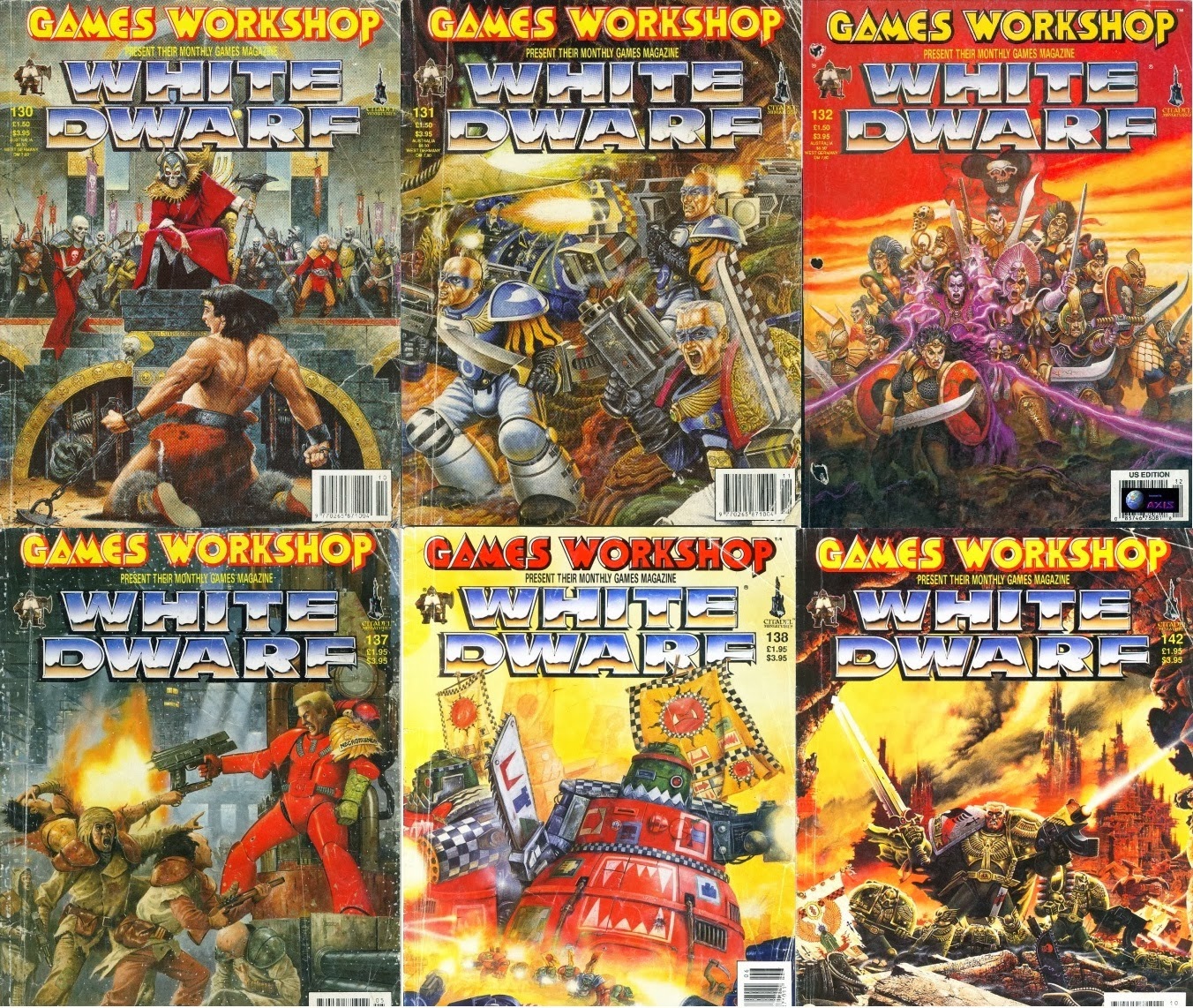 You can find pretty much everything in those articles but I'm going to concentrate on venators.

First mention of Venators in the conforntation rules is found in the characteristics of Hive gangs :

"The word 'gang' describes many different types of armed bands on Necromunda. Gang is a generic term which includes clan warriors, bands of ash nomads, savage gangs and mutant bands from the undercity, scavvies from the shanties, armed bands of techs, bands of fugitive psykers, unruly brat gangs of the upper hab layers, as weil as sanctioned gangs and professional bounty-hunters, guards and retainers such as the Venators and Custodians."

OK so from that we get that Venators are professional bounty-hunters. Next bit is in the description of clan warriors :

"The co-operation between the clans and Lord Helmawr is an accepted part of life. It operates at many levels, with gangs recruited into the Planetary Defence Force, given semi-official status as Venators and Custodians, or secretly used for Helmawr's hidden dealings."

So now, we also get that they are bounty-hunters with a semi-official link to the imperial commander Lord Helmawr who is the governor and ruler of the Necromunda Hive world.


Amongst other informations on Helmawr and his duties, you can find this part :

"Another important obligation is that Lord Helmawr sucessfully controls the numbers of dangerous psychic mutants. These psykers, or witches, are a mutation which is becoming increasingly common on ali worlds in the lmperium. On most worlds they can be dealt with fairly easily, but on a hive world like Necromunda with its vast population the matter is much more difficult.
(...)
If psykers were to go unchecked throughout the Imperium human society would soon coliapse. Indeed, this is one of the reasons why the Emperor clings so tenaciously to life, as only he understands the true dangers of possession and psychic destruction."

This information about psykers is important to understand the following which can be read in the psyker gang description  :

"Life is hard for psykers on Necromunda, as it is throughout the Imperium. Some fall prey to daemonic possession. More fall victim to the witch-hunting Venators and bounty-hunting gangs."

So now we have a group of  professional witch-hunters who probably hunt mutants and heretics too (though it is not mentionned yet).

What can be learnt form the rules? Quite a lot actually.
Looking at the Gang determination chart, you can actually see Venators are quite a rare gang with a chance of getting rolled of 5.5% just like Brat gangs and Tech gangs.
They are the second rarest gang after Psyker gangs and mutant gangs (both having a 2,7% rate of getting rolled), far more rare than Clan gangs who represent a 3rd of rolled gangs : 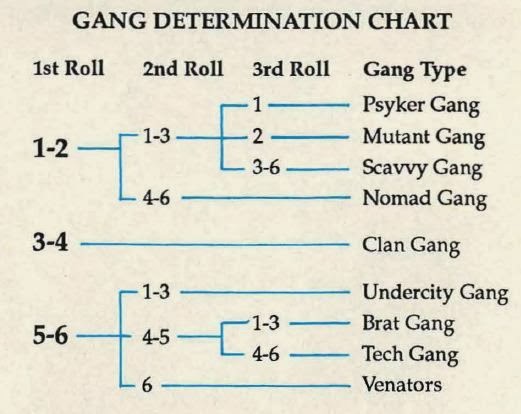 The newly rolled gangs receive a a number of credits (imperial currency) rolled from the table below. You can see the Venators do not appear in this table but an unknown gang called "Vigilantes" is mentionned instead.
Now here is something interesting. A vigilante is a member of a self-appointed group that undertakes law enforcement without legal authority so that does not fit the desription of the Venators we had so far. However there is a link between vigilantes and venators. Each one is meant to enforce law where the official forces can't.
Vigilantes may have been the original concept which was later turned into some bounty-hunters. The design studio may have wanted to avoid using such a concept in the final game but this would be surprising since at the time, penal troopers, commissars, inquisitors and other concepts of the sort were already romaing the table tops... this is mere suppositon from my part though.

Anyway, assuming the Vigilantes stand for the Venators, they are actually the second richest gang after the techs. They are at the same level as Brat gangs (gangers form Noble Households). 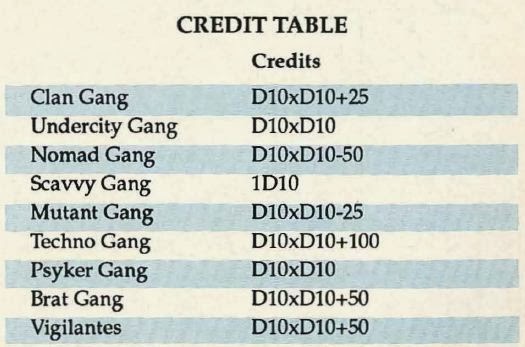 You can also see from the charts to determine equipment for your gangers that Venators do get to roll fancy stuff : 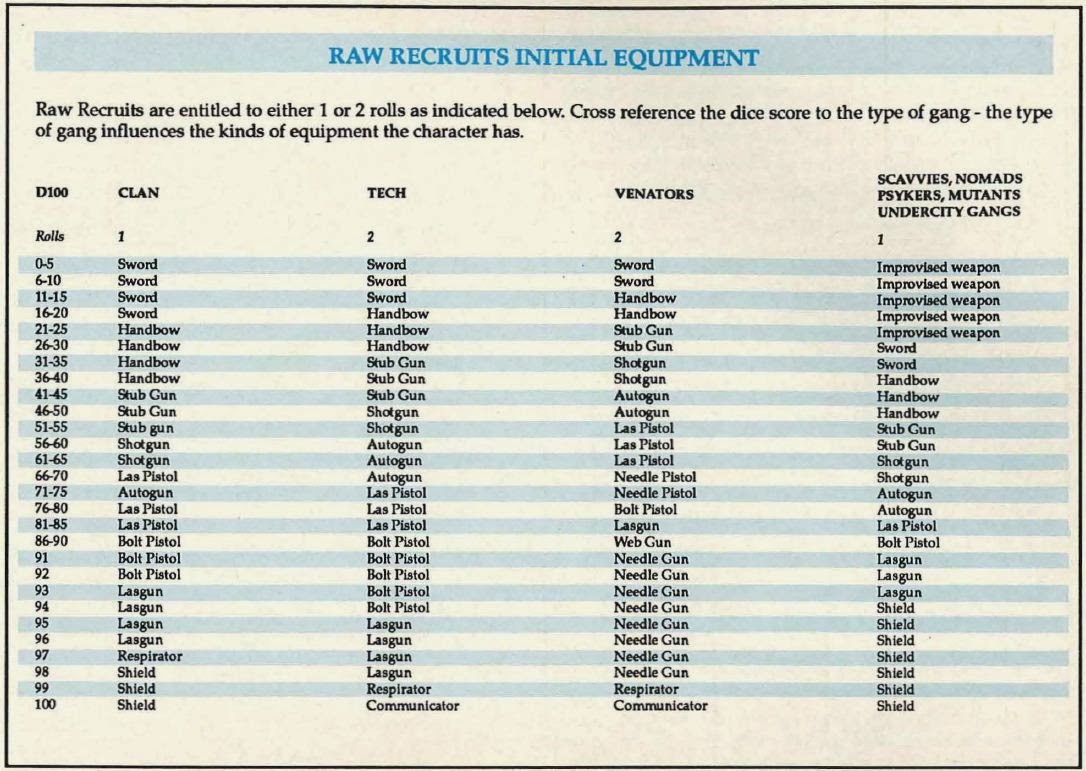 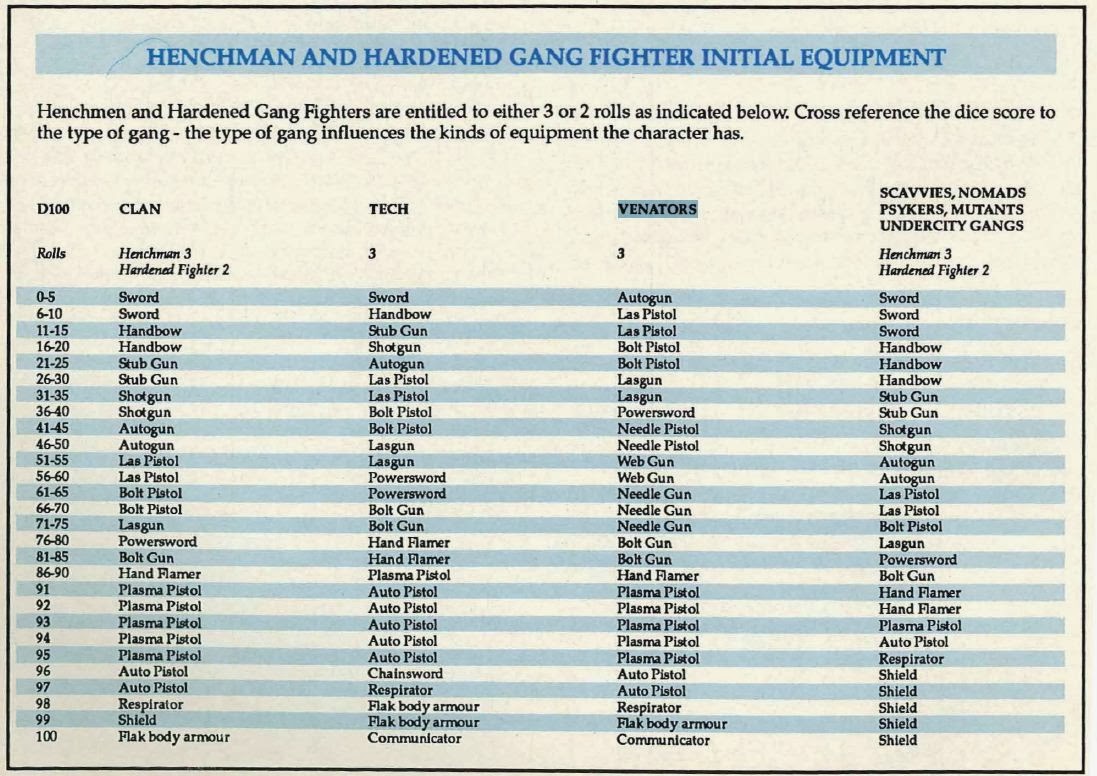 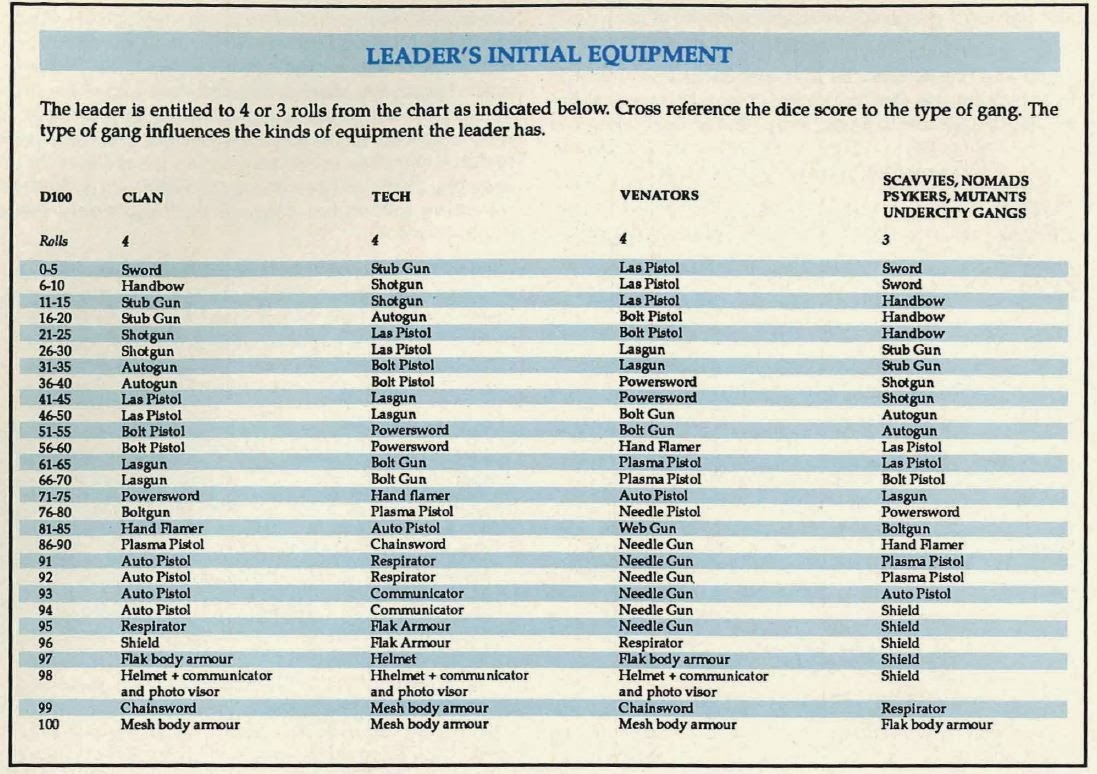 Their chances to roll fancy/pricey gear like power swords or plasma pistols is far higher than that of an average gang.
It actually reinforces the idea the Venators are actually a group of highly trained, reliable and skilled  professionals.

Much of the design we know about the Venators comes from the drawings and sketches by John Blanche . The most famous one is of course the one depicting a Venator leader with uzi with Jervis Johnson's face in the bottom left corner 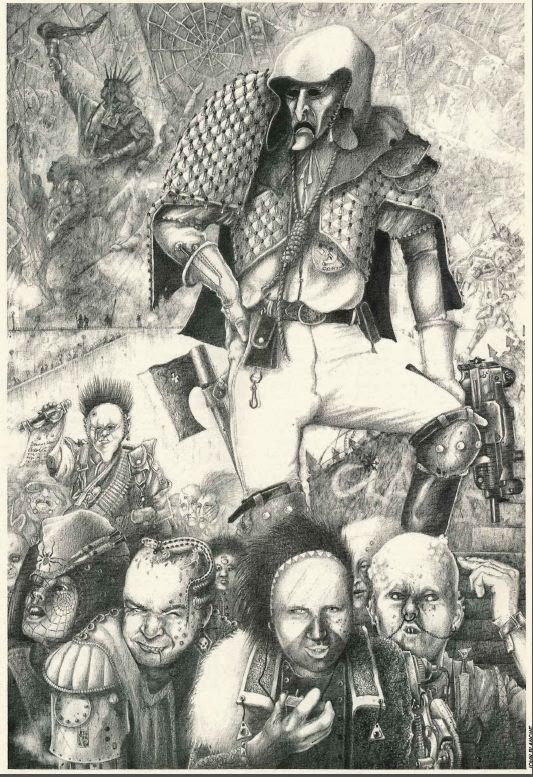 But the sketches you can find in the "Clan warriors" section are really helpful too.

All of these can be found in the sketch below : 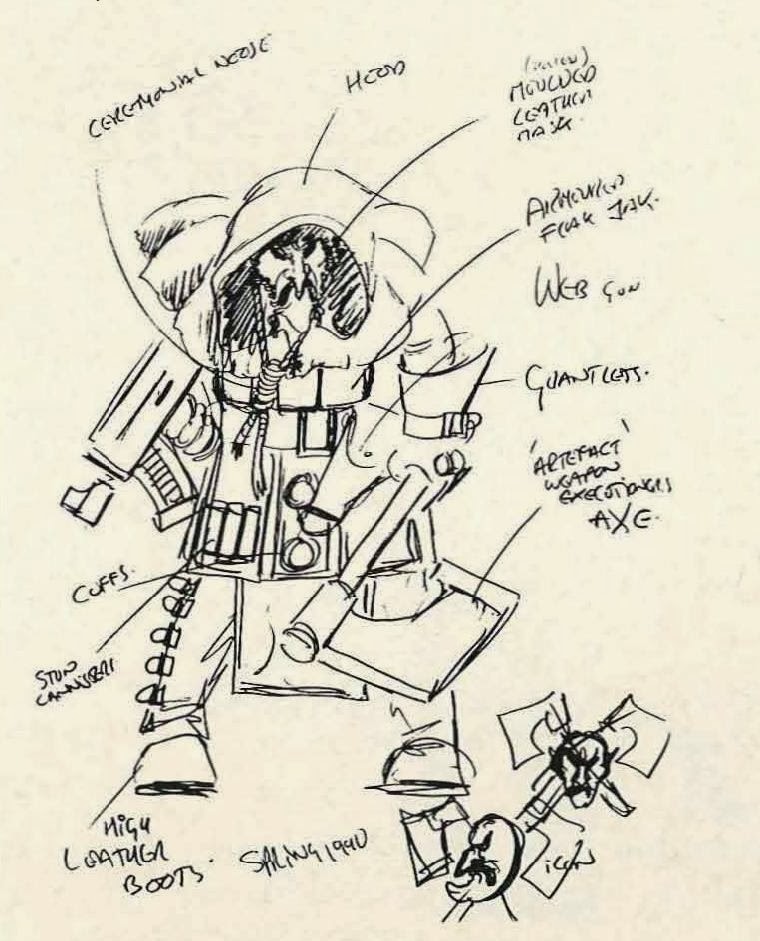 The other source about how the Venators look is obviously the models themselves :


You can find the hoods, grotesque masks, executioner axes, leather clothing and icons on them. Like most marauder miniatures though, they are a bit bulky and somehow lack the elegance shown in the drawing by John Blanche.

The reason I'm planning to build my own version of the gang is that these models are actually quite rare and hence very expensive and they somehow do not correspond to what I'm looking for with this band.

I thougt it would be interesting though to see what became of them. There is one thing we all know about GW, it's that they rarely lose a good idea, they always find a way to recycle it, even if the new version may sometimes (or always if you're a GW basher but I'm not) be less intesting than the original concept (but that's another story).

The future of Venators and confrontation :

Even if you were not familiar with the confrontion game to begin with, I believe you've now guessed it is the game from which Necromunda was developped.
The setting is the same, the principle is the same. The main differences are the rules and the  ambiance actually.

The confrontation background is tied with the rogue trader setting which was still in development at the time. I'll develop the background of the game in a later post but those familiar with the Rogue Trader universe get the cyberpunk vibe form this.

Necromunda on another hand derives directly from Warhammer 40k 2ed and was published in 1995. It actually comes at the end of the "Red Era" with its caracteristic bright colours. 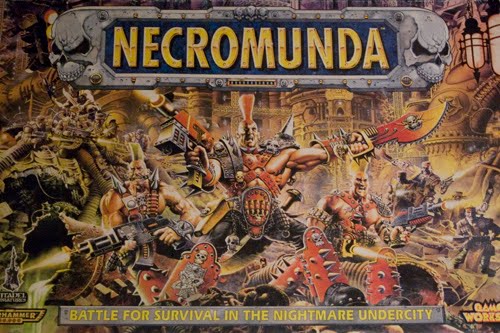 Amongst the numerous gangs available in Necromunda, 2 are actually really intriguing if Venators are of interest to you :

Here's the description you can find about them :

"House Cawdor is the stronghold of the Cult of Redemption. For this reason all of the gangers wear masks in public to hide their faces from the 'infidels' of the other houses. They are known to hunt mutants and heretics to the point of fanaticism (part of the Redemptionist influence) which bring them into conflict with gangs who would utilize them."

And here are the models available when the game was released : 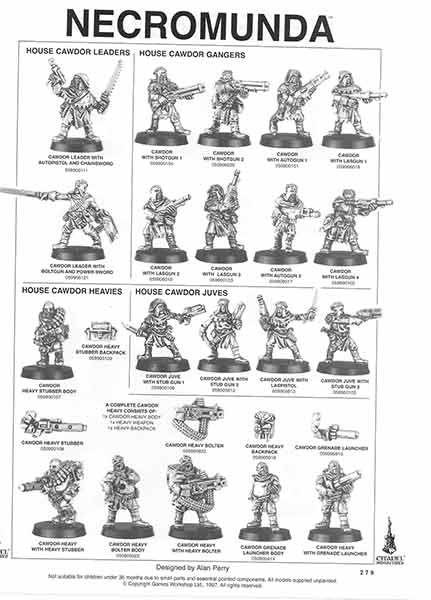 Funny How I see a bunch of mutant/heretics//witch hunters wearing hoods, masks and leather clothes very close in style to the marauder venators ! They even have the nooses all around !

Now let's move on to the redemptionsits which are tied to the cawdor.


- The Cult of the Emperor's Redemption

The Redemptionists are actually a nod to Laserburn (what a coincidence!). Here's the description you can find about them :

" They have an extreme hatred of mutants and deviants from the Imperial creed. The most dedicated among them take up arms and hunt these mutants and deviants. They often wear red robes decorated with flame motifs and favor incendiary weaponry. House Cawdor lends much support to the cult of Redemption and have gone so far as to adopt it as their official religion."

And here are the models made for them :

I see hoods, grotesque masks, nooses, I'm actually just lacking the axe here! You even can find one with the grotesque face like the ones on John Blanche's drawings :

oh but wait ! Here is the executioner axe !

So now, the witch hunters in Necromunda still wear leather clothes, hoods and masks. They still carry nooses to apply law as soon as they can. The main difference between them and the Venators is that they are no longer semi-official professionals, no, they are now just a bunch of fanatics who have decided to cleanse the underhive from its filth by fire and blade.
Doesn't that make you think of the Vigilante definition somehow? Looks like back to square one...

I think it is really interesting to consider the basic difference between Venators and redemptionists : The former do it for money and the latter do it because of their faith and belief.
It is quite an ironical position considering the venators come from the Rogue trader period caracterised by the freedom the designers had and by the fact the design studio was mainly a group of very talented enthusiasts and how the version created afterwards under the Kirby era is about fanatics...
Rogue traders have left 40k to leave the place to inquisitors...
Poorly shaved smoking Space marine beakies arresting punks have left the place for zealot mk7 monkmarines...
and venators have left the stage for cawdors and redemptionists religious fanatics....

Hopefully, Venators may have gone back to their origins, who knows (well Mr Ansell and Mr Priestley may...).

I think I'll be enjoying building my venator gang even more now I know all of this....