Today's journey into the golden age will bring us to a forgotten race amongst those who never came back.

I don't know much about them but would definitely learn and read aboud them with pleasure; One thing is for sure, these are great minis.
I decided to base mine on 40 mm square bases because the minis are quite long and need room. It's also a trick to play them counting as ogres or anything else whose rules would fit.
This article was the occasion for me to experiment new photo techniques (and use the fading blue underground) but I still can't find a way to get rid of the shining aspect which ruins a part of the paintjob... 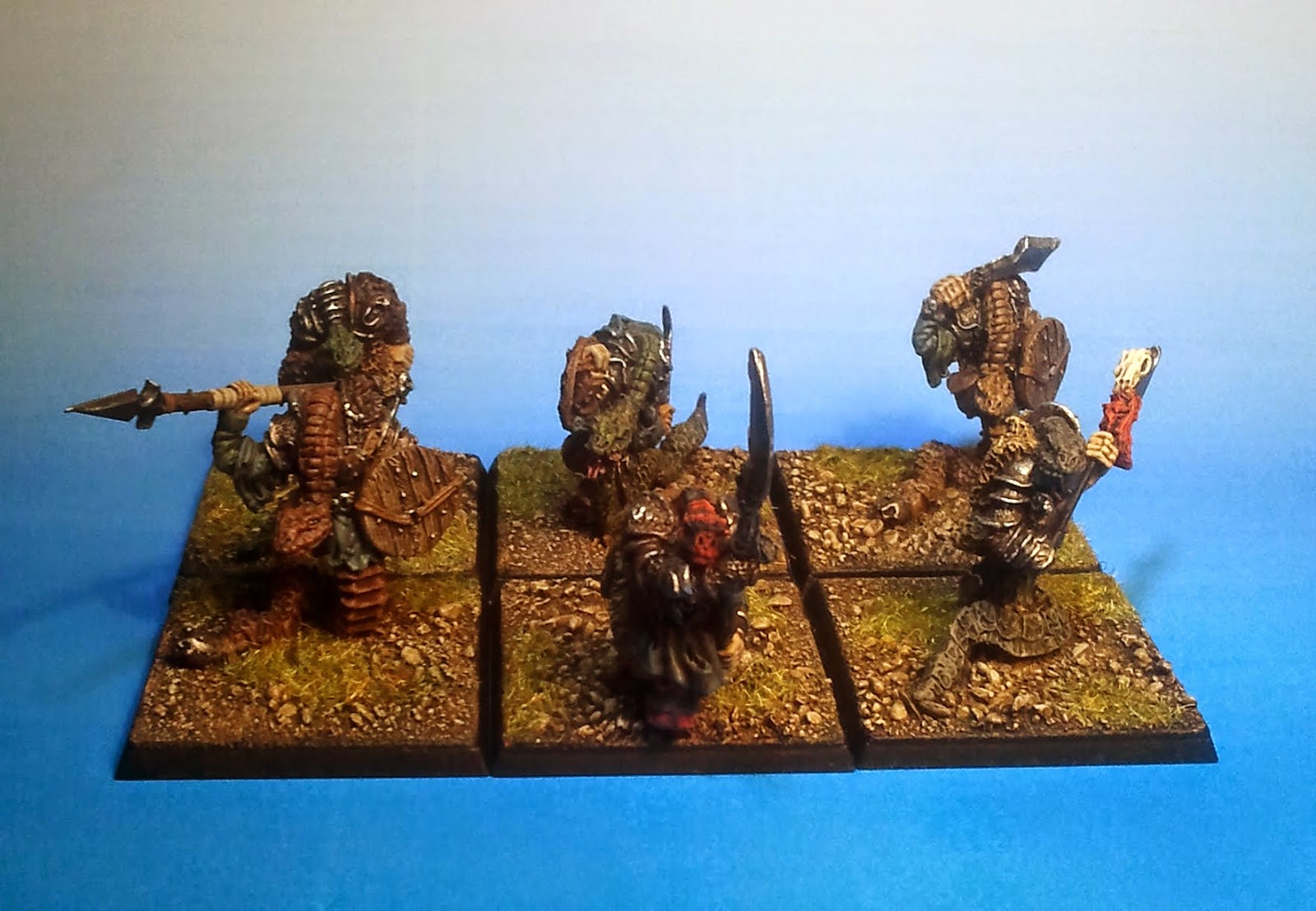 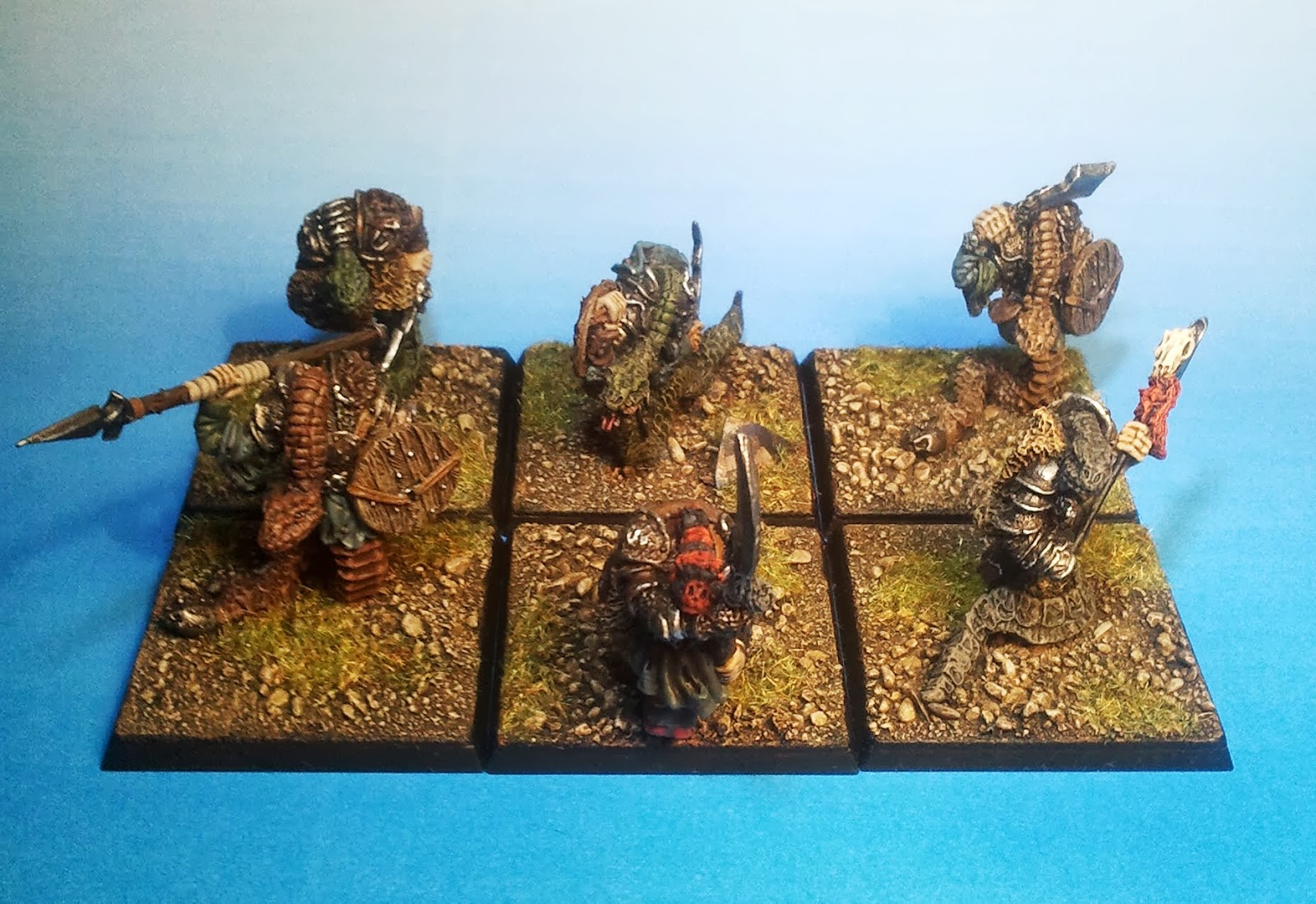 There are only 5 different minis so I had to get my hands on an extra one and commit the unspeakable : cut in the lead...

Saranth Elf Mangler is my champion for this unit so I decided to use a colourful skin tone to show his rank compared to the more classic colours of his retinue. I also placed him volontarly at the limit of the base to make him stand form the rest of the unit and give the feeling the others are following him. 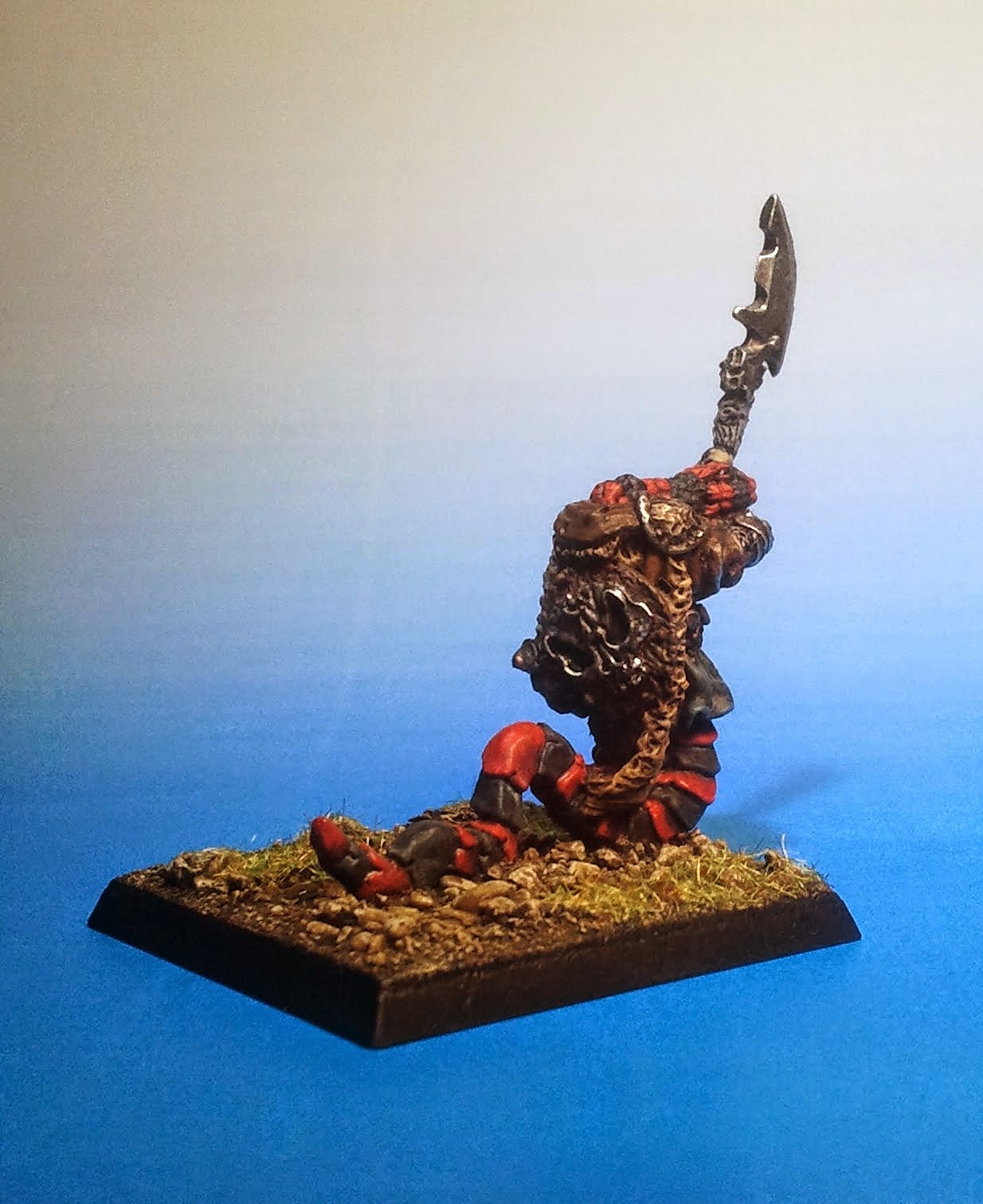 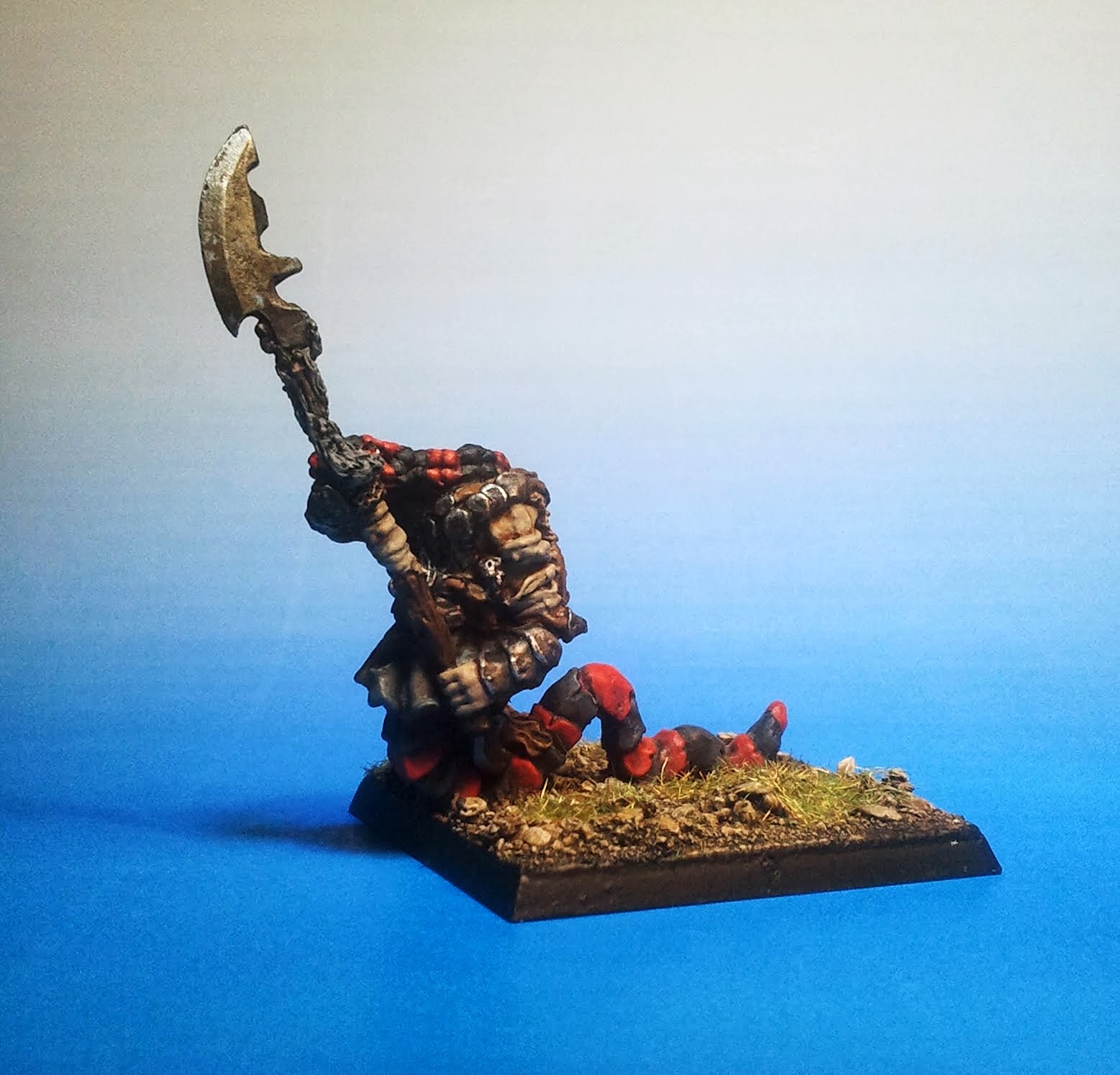 The second one is S'sirron Fangthrane and is my favourite of the 5. His noble stature and the overall look are a pure delight. He' also got the best sculpted scales imho. There are some kinds of tatoos on his left arm (invisible on the photos below) but I haven't treated them correctly and might have to get back to them with a bluish approach in a celtic way. 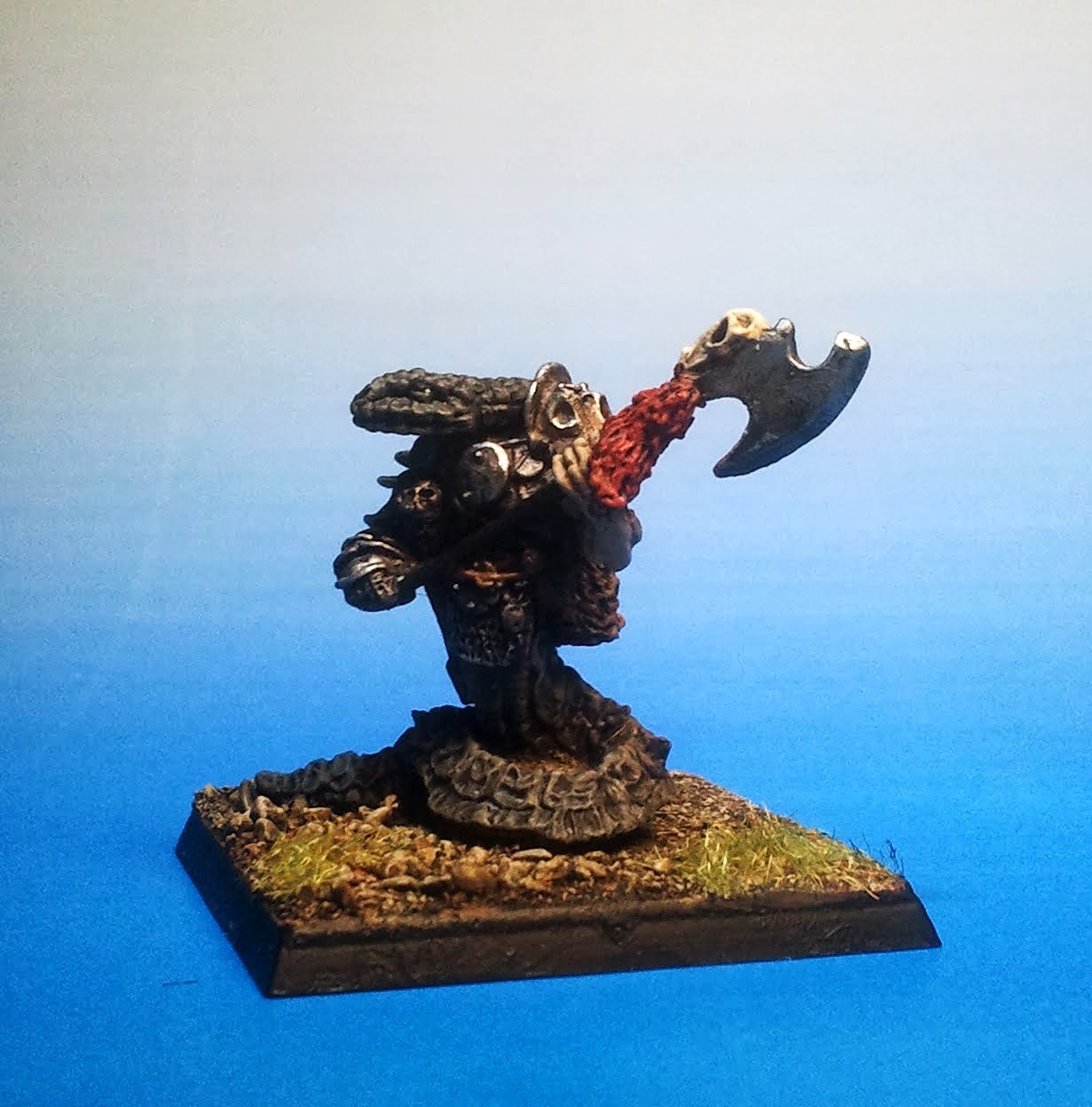 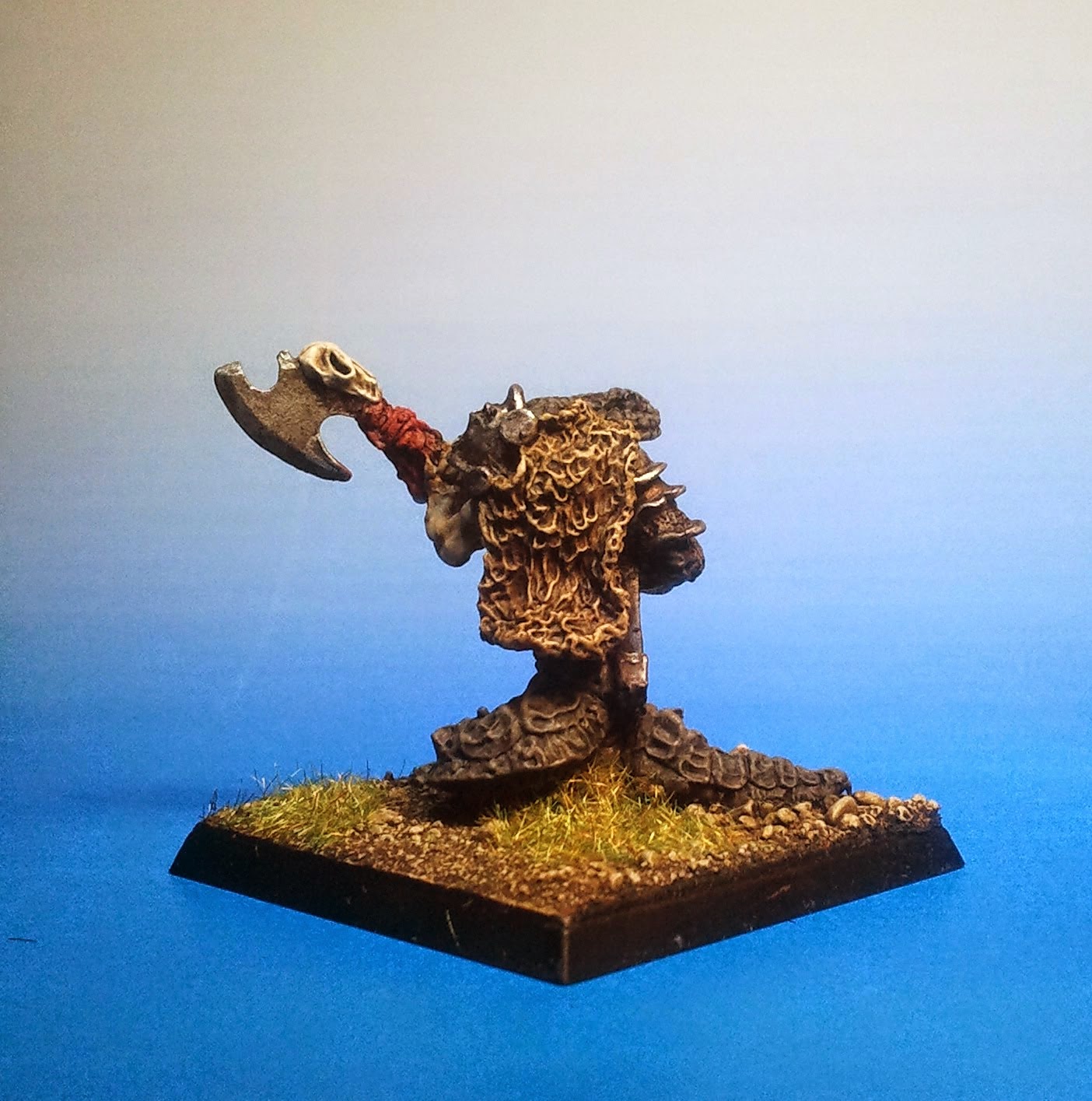 Third next is our dear Higgat Dwarf Slicer. Definitely not my favourite. The sculpt is to "flat" though the arlour is quite excellent. The broken shield is here to break the flatness of the mini and to link it with my brettonian army as well. 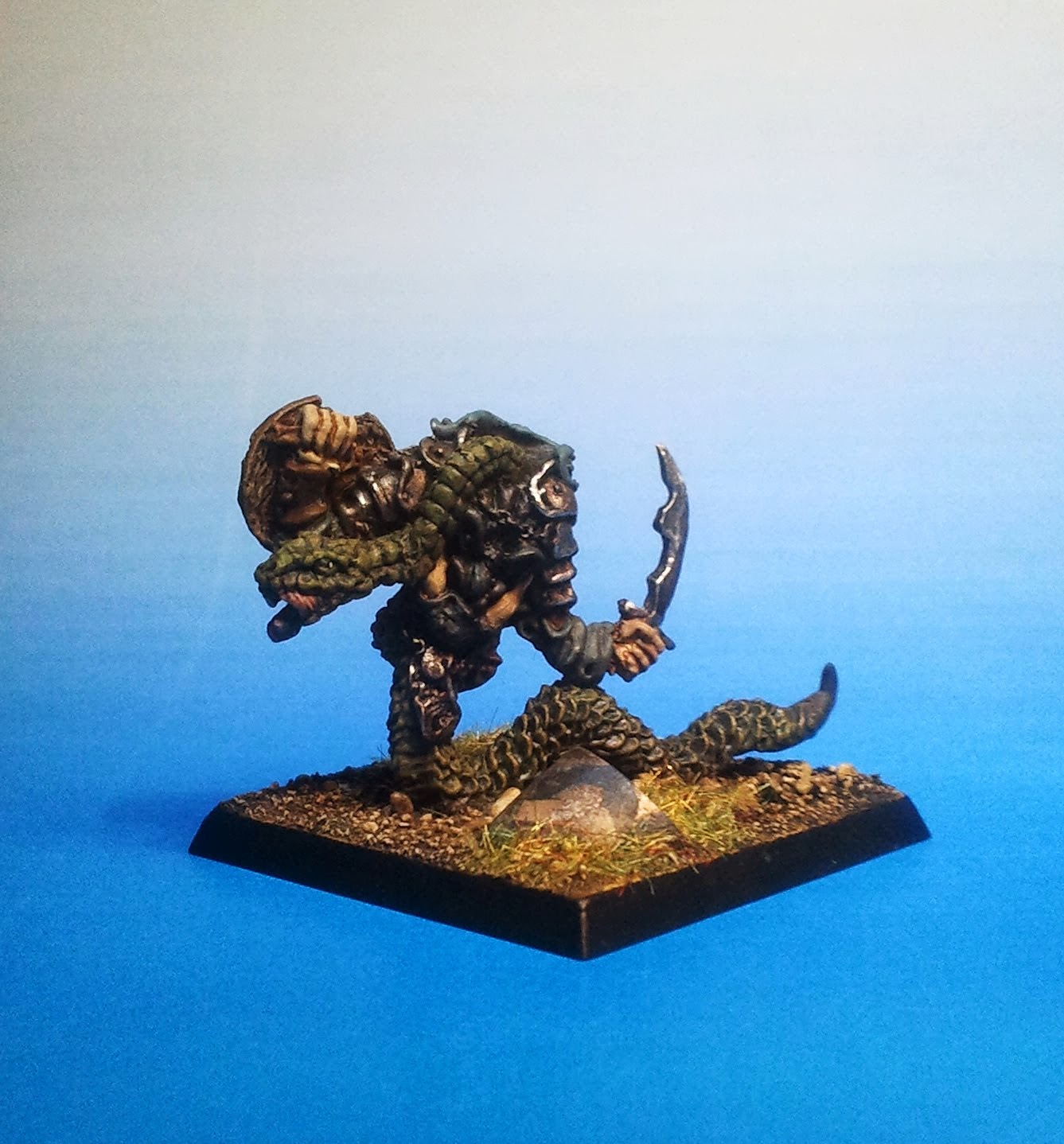 Fourth is S'Lon Life smasher, very sneaky or should I say snaky with his shoulders raised and the fact is seems to be going backwards. This one is the one who looks the nastiest to me. He looks like he's wainting for th eright time to stab the injured or the ones fleeing... 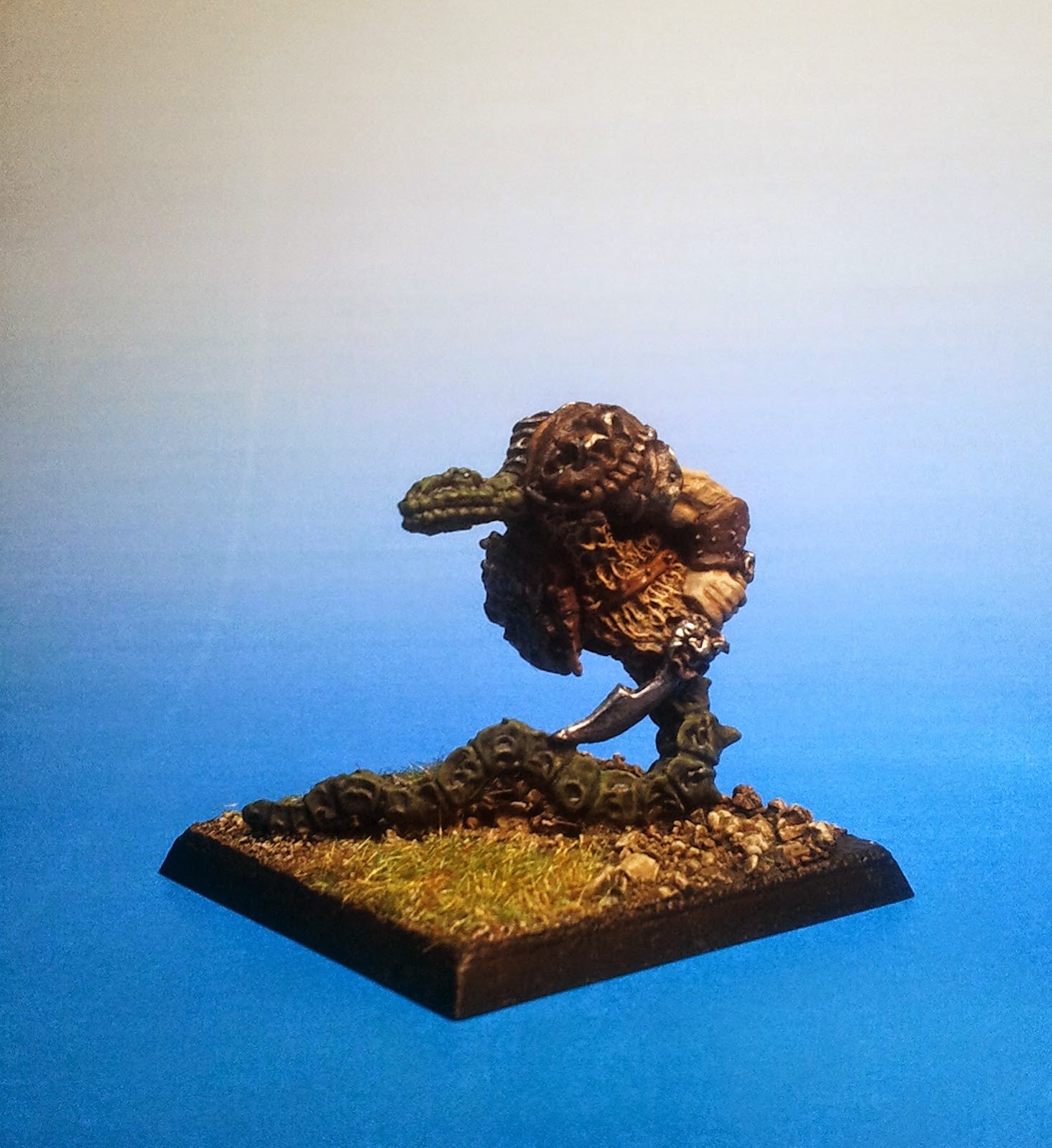 Fith and Sixth are S'Lararet Slintered Fang and S'Liip N'ot Bolt Thrower which are the same miniature, the latter having received a spear from a chaos marauder to make him look different from the former. 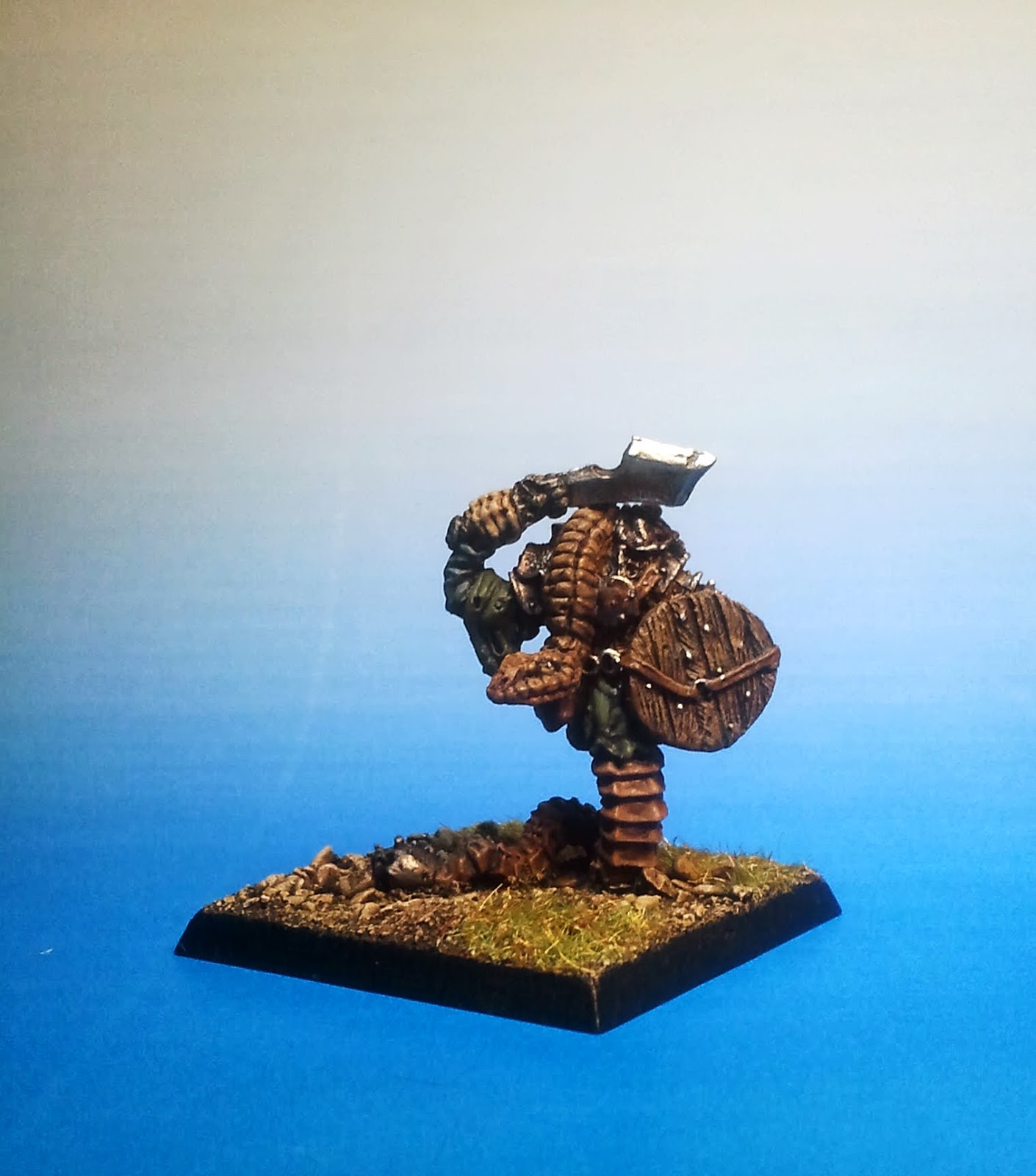 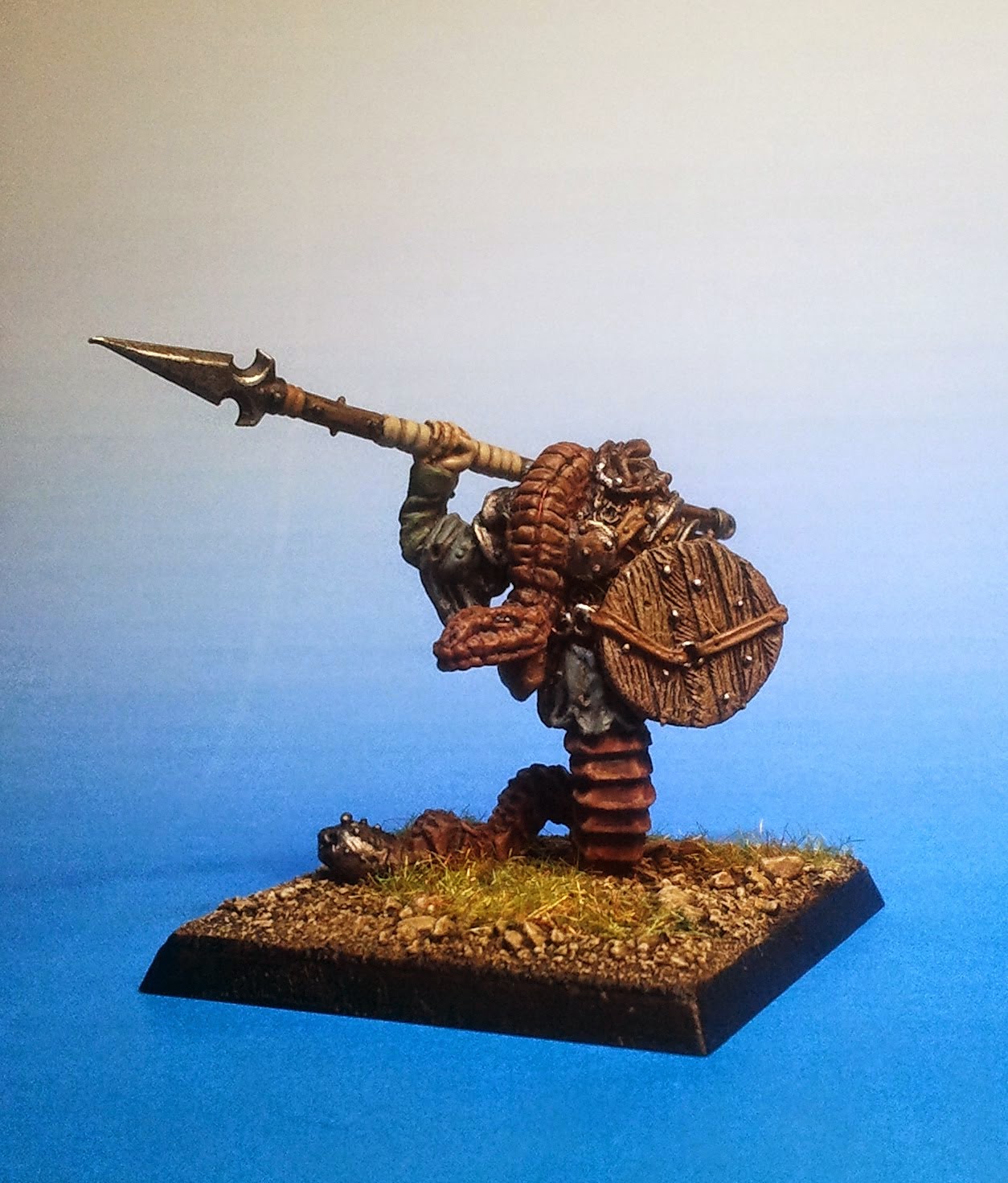 To finish this post, here is one of the only illustration of a snakeman I could find. It comes from the Slaves to Darkness tome of the Realm of Chaos books. 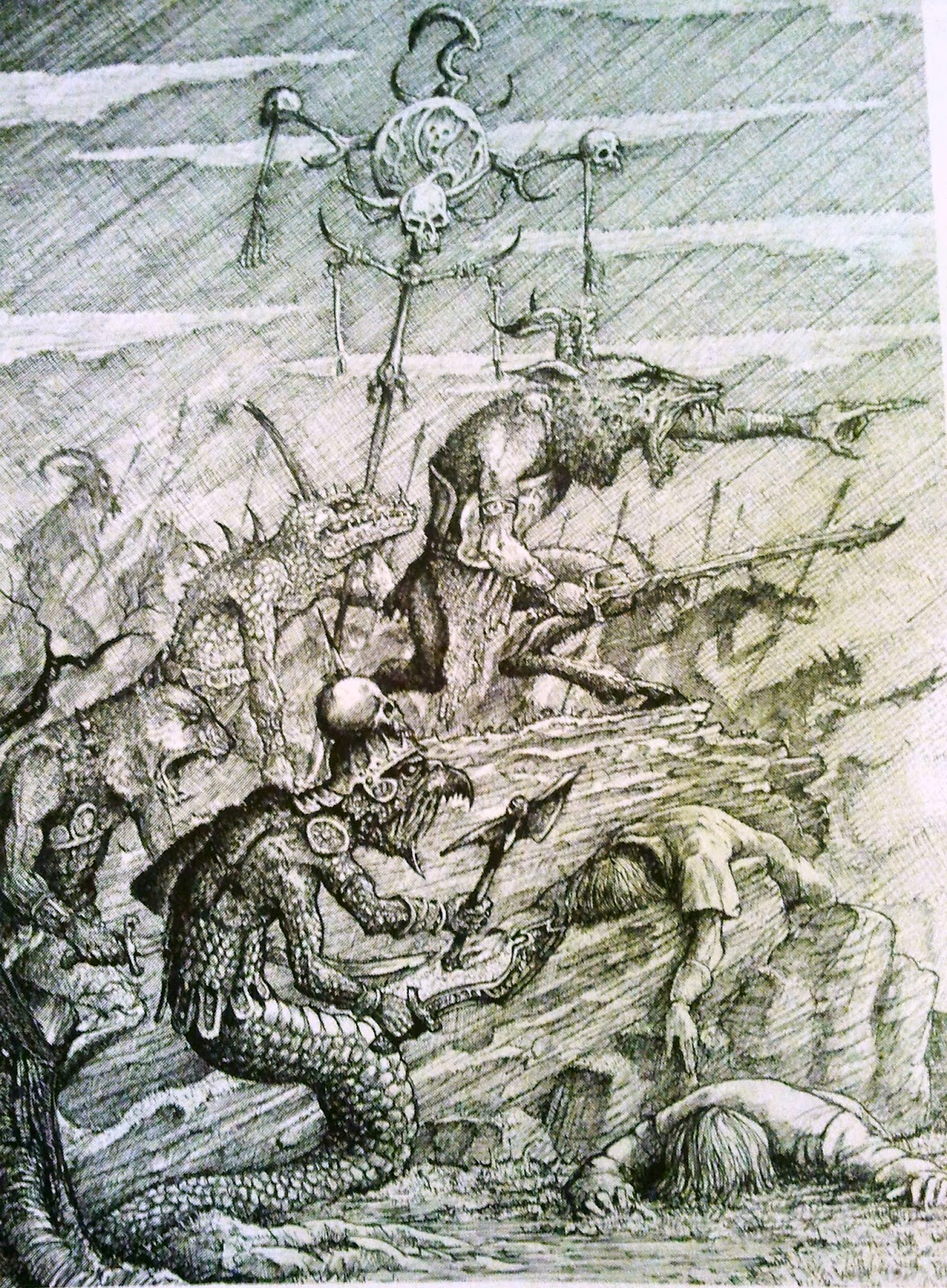