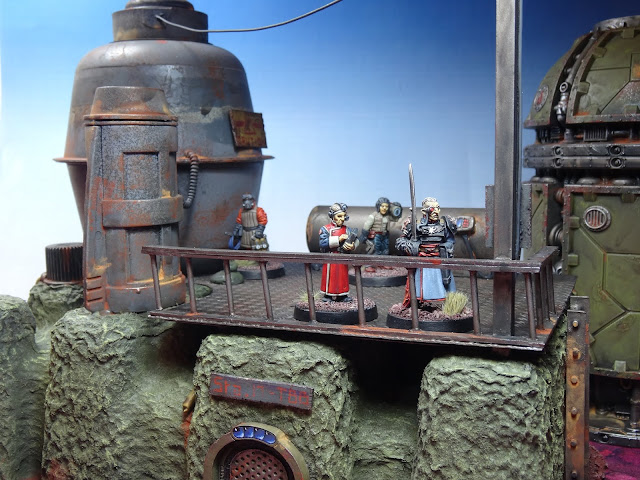 Brian Roe from Roebeast's magical house of sunshine has organised a new edition of the Trash Bash competition on the Facebook page.
I have to say trash bashing has never been my forte so I thought I'd use the occasion to take part and come up with something for once !

You can read the full rules on his blog but the main points were the following :

Contestants will construct and paint a vehicle or structure inspired by the terms ASSAULT/SIEGE. Concepts do not have to be military in nature and can embody any ideas that the entrant sees as viable.

The required bit is a medicine package. From pill bottles to blister packs, any bit that once held or dispensed some sort of medicine is valid

So I tried to look in my stash for suitable pieces I could repurpose and came up with those : 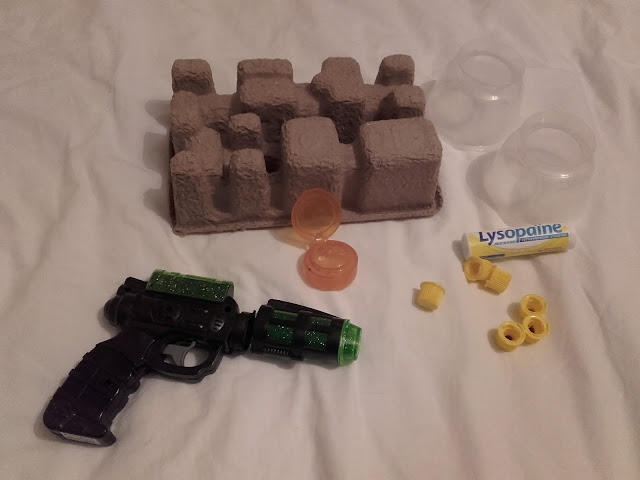 You can see the potential (most of the stuff is fairly obvious if I'm being honest so I quickly came up with a basic structure (Battlemasters orc for scale duely painted by my daughter). 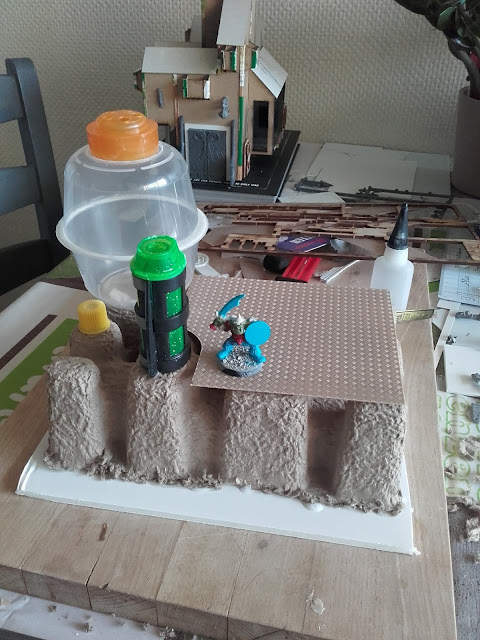 The next step was to add detailing like a ladder or rails so I used plastic card and rods : 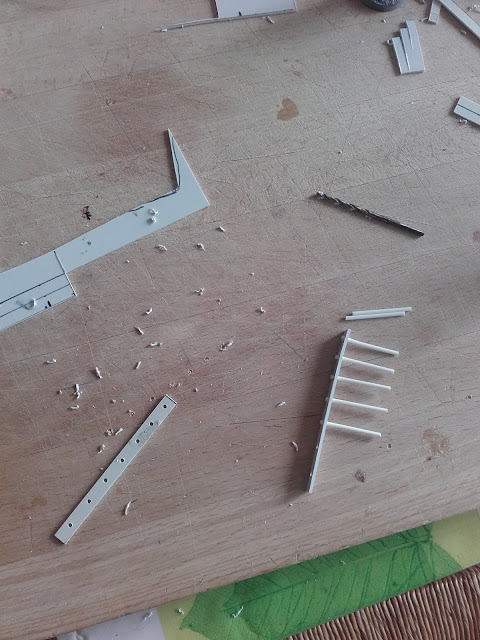 As a little nod to Brian's late KS I also used one of the doors I got in the Trash Bash Bits KS (although I know ready made parts wouldn't score that well in such a competition but hey !). 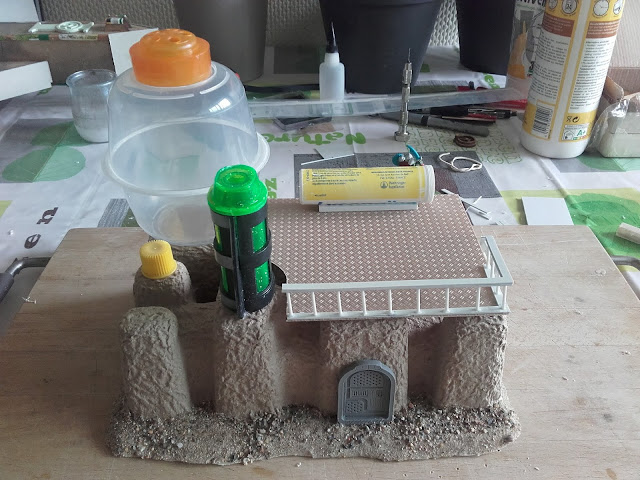 A few painting sessions afterwards, I was the proud owner of this fine building which looked "OK but". A quick chat with my beloved WIPsters made me realise I needed a bit more though... 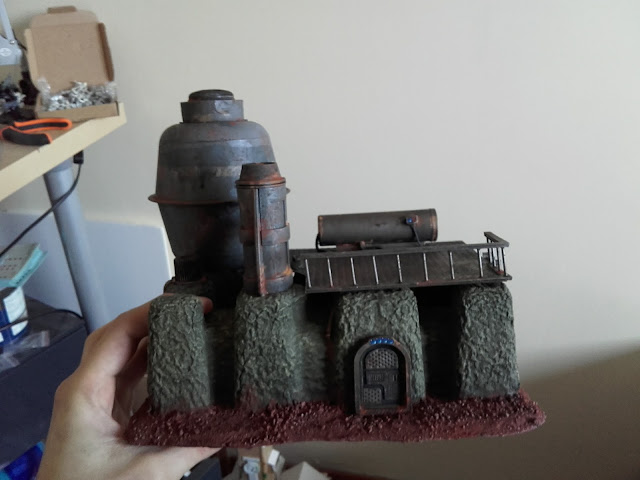 So I took a colouring pen out and some more plastic girders and worked again ! 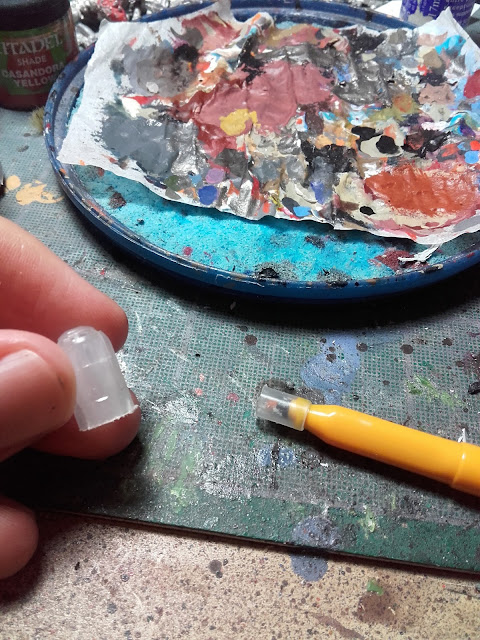 I think they were absolutely right and it really gave the whole piece another dimension it lacked before. 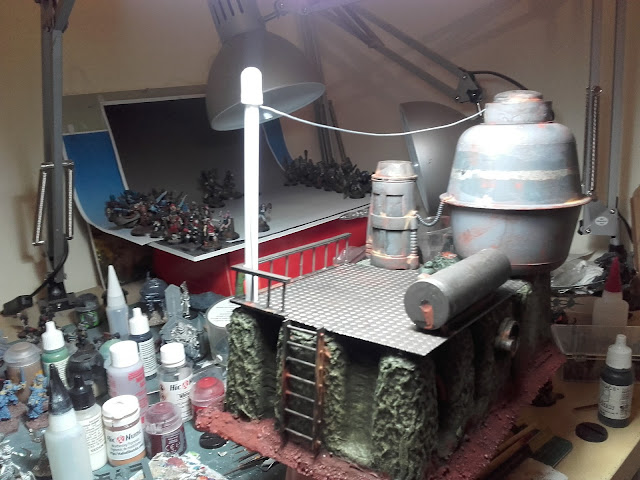 - One cardboard box (package of a modem IIRC)
- The plastic cap of a spice bottle (used to make the exhaust on top of the big tank)
- 2 greek yogurt pots (to make the tank)
- the canon of a plastic toy gun that used to shoot balls (to make the chimney)
- one door from the Trash Bash Bits part 2 KS (which although not a good way to earn points felt mandatory ^^)
- the plastic cap of an apple purée bag to do the heat radiator
- Green stuff Pcard and plastic girders to build the platform, signs, ladder and pole (late addition not visible on the first picture)
- The plastic pen cap from a colour pen (at the top of the pole)
- Green stuff and metallic wire to do the wires and pipes.
- Foamcore to do the base covered with gap filler and sand.
- The medicine bit is a tube of tablets for sore throats (Lisopaine)


So here are a few better shots of it, I know it's a nightmare to take good pictures of such pieces honestly so I tried to do as well as I could : 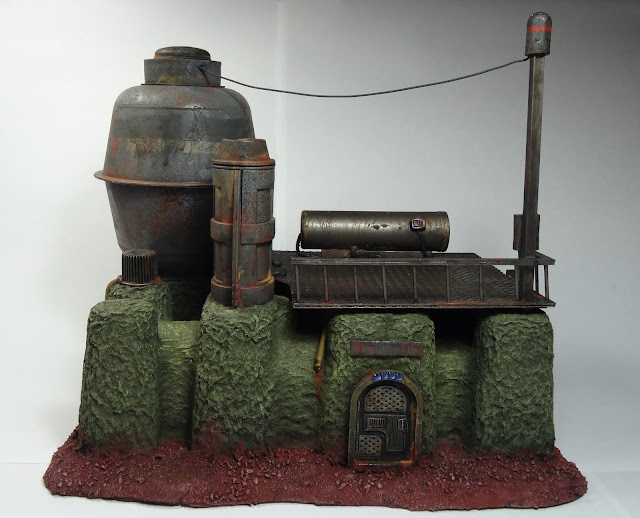 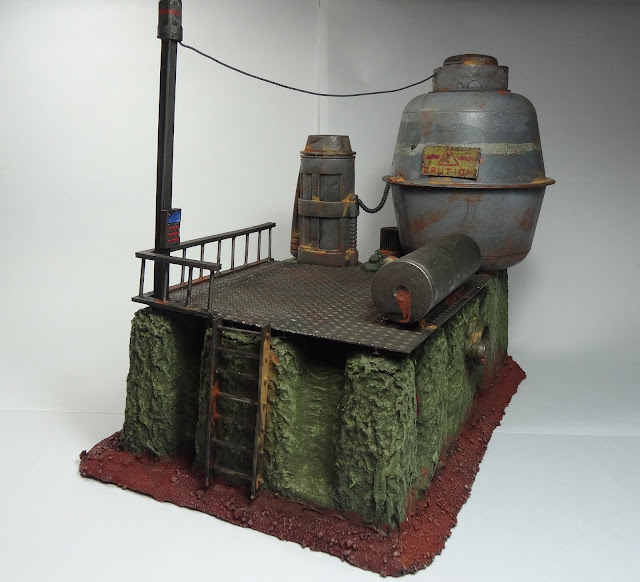 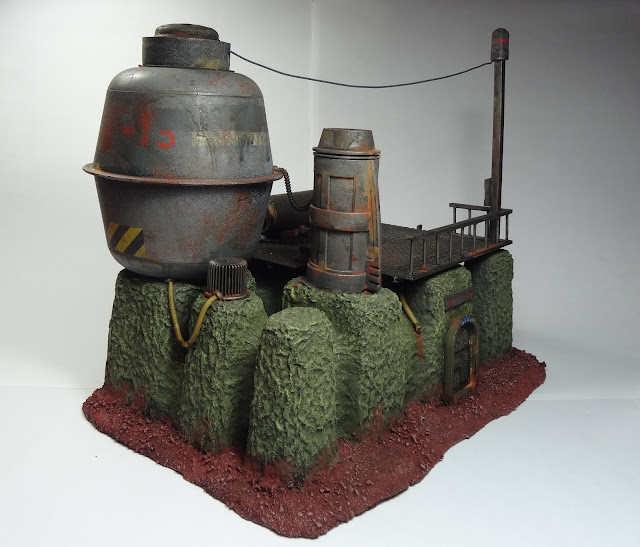 General Nelson had spent his whole career on the front, leading his men with a firm but just hand. His assignment in the remote Novaross system almost felt like an insult to him.


With time flying, the sting started to fade and he could almost lay the tips of his finger on a well earnt retirement.


Until that message arrived. If his last assignement was to keep the energy supplies secured in this outpost, then he would not be found at fault. 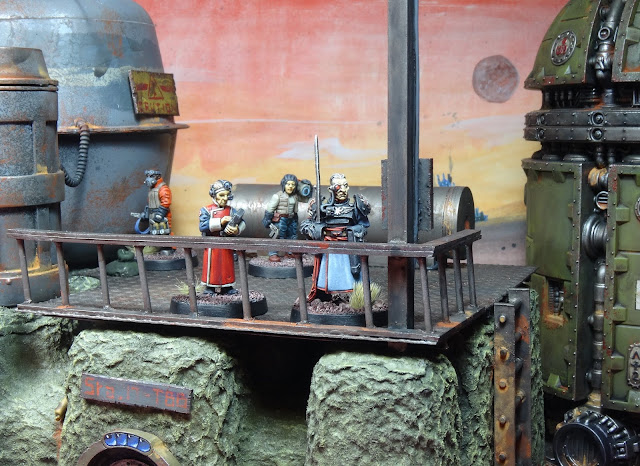 So this is it ! We've just find out the results today and guess what ! I won ! Yoohoo, first place for me ! I'm really surprised because I find the other contestants have gone far beyond what I did with their use of bits (looks like bribery does pay after all...).
I really loved taking part in this one and hope to take part in more in the future as it was the proper kick in the rear to get something done on the terrain front !
Many thanks to Brian for organising everything like a pro and kudos to the other contestants (whose trash bashing skills far exceed mine in my view).
Publié par Asslessman