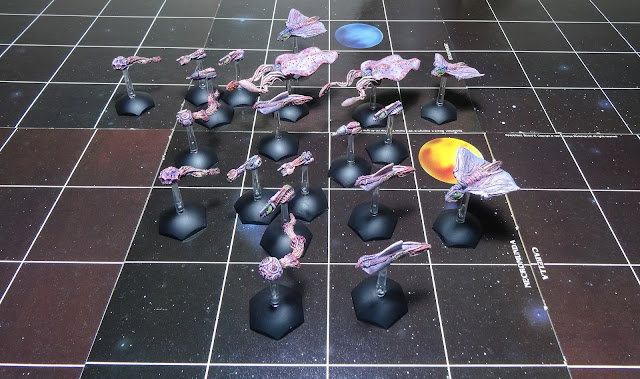 AAAhhhh, the sense of achievement when you finally finish an army ! It's been a very long time since I last tasted that sweet taste. And It's probably the first time in my life I've managed to make it happen in a day !

You might recognise those from an earlier post where I was shamelessly showing off bare lead and exposing plans for the future... Well Thantsants' report about his Space Fleet games at BOYL were enough to ignite a fire in my heart.

Space fleet is a very dear subject to me as I've already said HERE and HERE and for some reason I've decided to start with my Tyrannid fleet.


This was the occasion for me to test new techniques and ways to paint I rarely use.
I started everything with a basecoat of blueish grey witch I zenithal sprayed over with white (nothing new so far).
You can note how I carefully glued the mounts in place and masked them with tape to avoid the frost of the glue and paint (I wanted to keep them clear if possible). 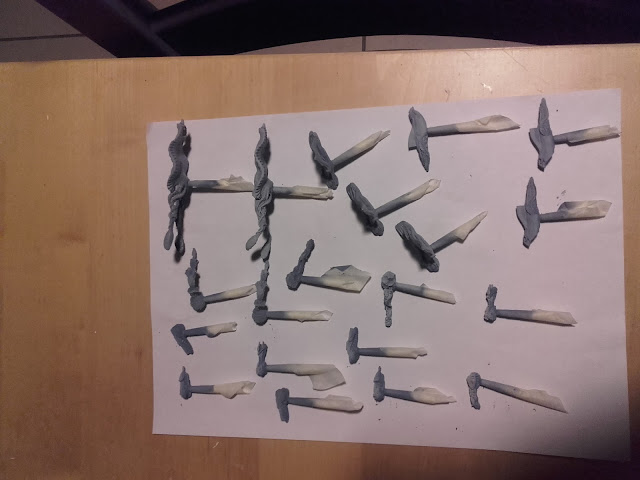 I then started to work with all the washes I had, combined with lahmian medium (one at a time though) and glazes where I thought I could use some. Colours I used were : Crimson Carrobourgh, Baal red, orange, blue and purple washes, Nuln oil and red and green glazes.
I just finished by picking a few details like eyes and... things that look like eyes in green and that was all really. Easy job. All models had been primed before but the actual painting only took me half an afternoon and a size 2 brush. 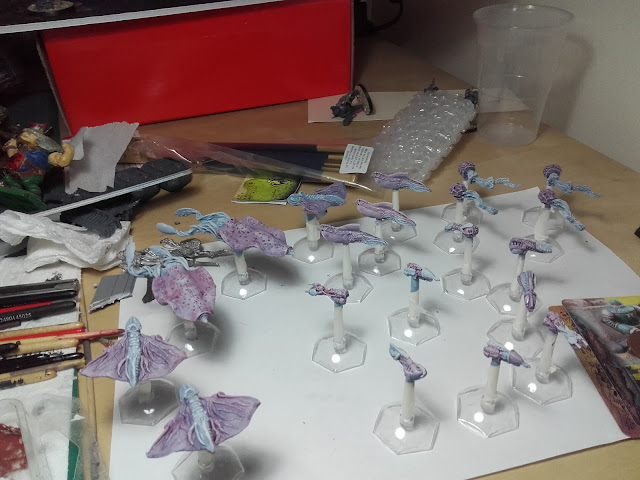 You can see the result above after the first washof 50/50 lahmian medium and crimson carrobourgh, the very organic look I wanted to achieve was already shaping up.

Now let's take a look at the different ships one after the other.

Those weird squids looking like alcoholic livers with tentacles are very flat and hence quite tricky to photograph. I tried to use the textures as much as I could and gve as much variations as I dared to avoid making it too boring. Fun sculpt even though a bit week with traces of tools in the putty and many finger prints. 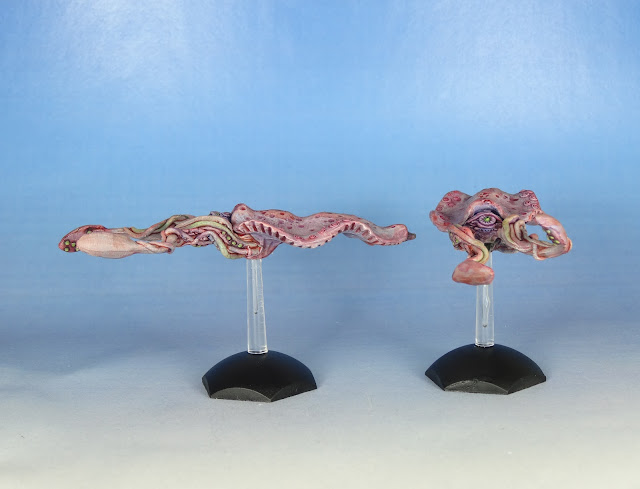 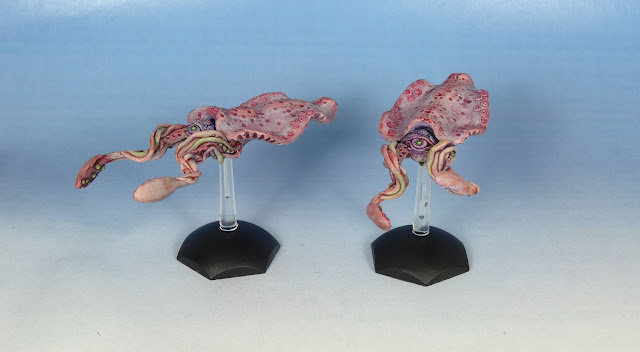 These giant void moths are pretty fun too (and desperately flat too). For some reason, they have gigantic eyes (probably they're huge translucid bays tyrannids can loo through when they feel like it to enjoy the beauty of the stars...) 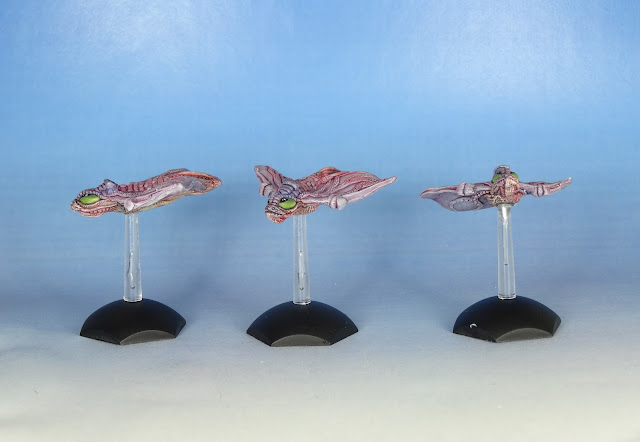 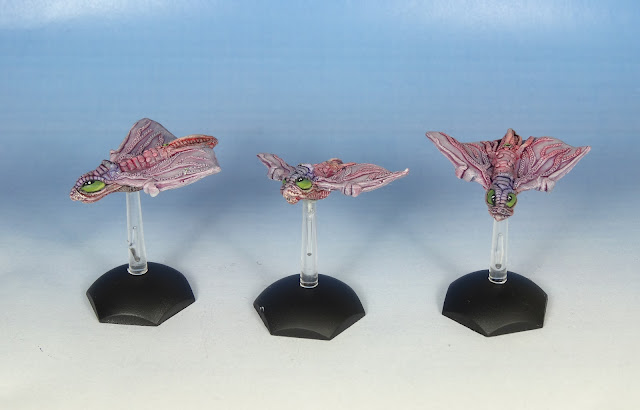 The Space Vacuum cleaning leeches of the fleet. very nice sculpts, simple but elegant, given the flat surfaces on the sides, these might be the ones for which the technique worked the least but they're still OK in my book though. 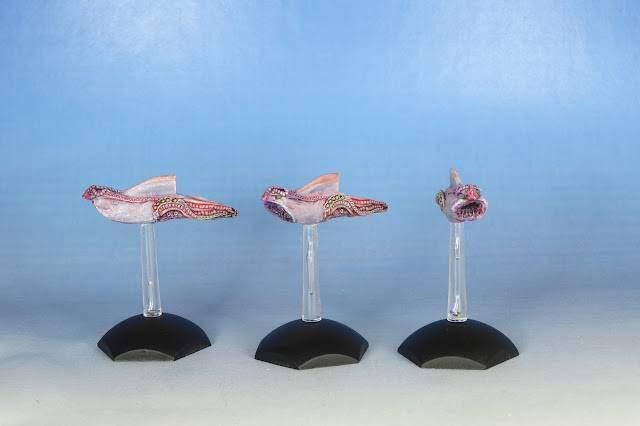 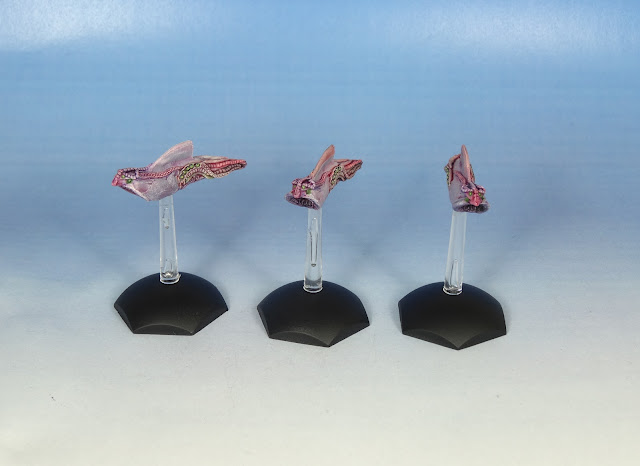 Giant phallic interceptors. Every single one of them is shaped like a giant phallus with a pair of testicles (except the monoball sculpt). I have to say they're the ones I had the most pleasure to paint. Throwing washes at them just made them look even better and a few glazes here and there really made some pop. I'm eager to replicate what I learnt on these guys elsewhere. 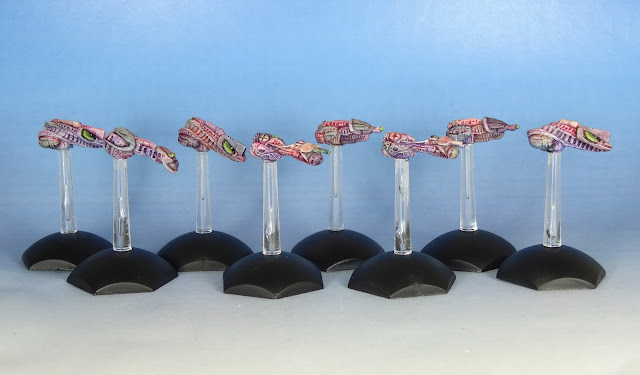 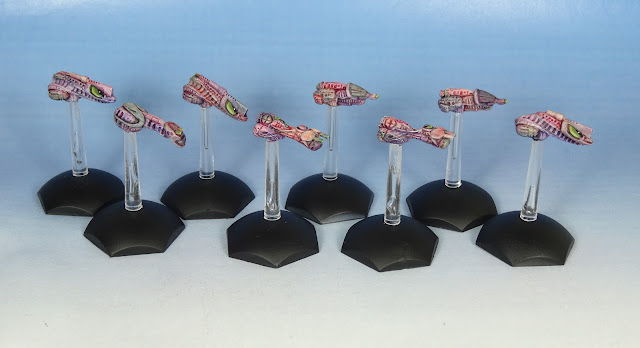 Same thing here, those spores were like a solid promise of total boredom but they finally came out as fun little things to colour, especially the ones on the right. 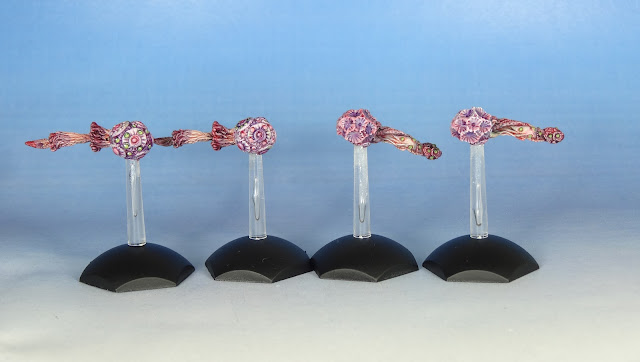 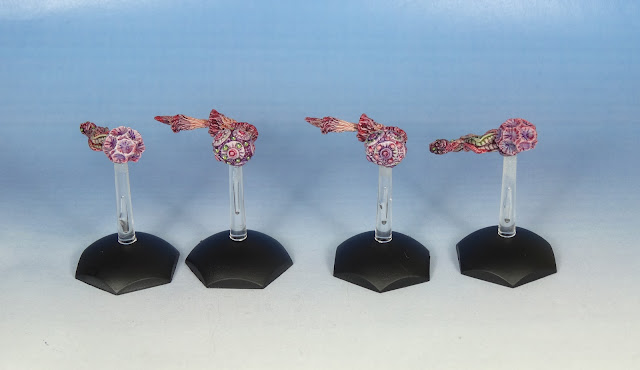 Will I play them in a near future ? Most probably no. Will I play them one day ? Well, if I manage to make BOYL 2017 a reality, this could very well happen yes ! Or I could also paint my imperial force and invite a friend over...

Anyway, there are plenty of opportunities and they clearly haven't been painted in vain !
Publié par Asslessman