Behind the wall of sleep : part 2

Since I'm on vacation again, I won't have the opportunity to take pics of recent painted stuff, yet I have a few older things I believe to be of little interest to some :

In 2004, I bought myself some ogre from the the comic "chroniques de la lune noire" This minis was painted to a relatively good standard considering my skills at the time. The real subject here is what happens when you put resin models in foam trays? : 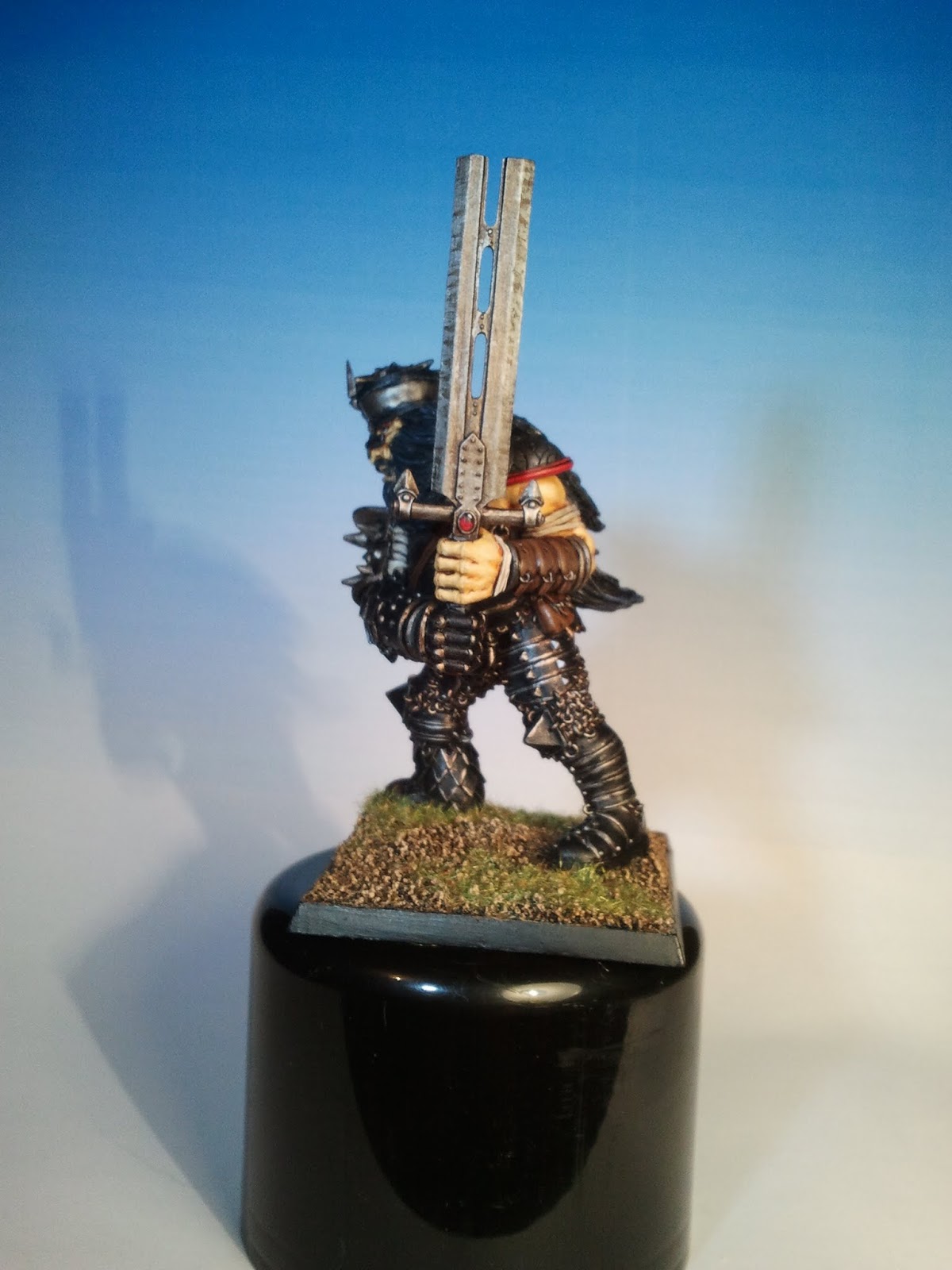 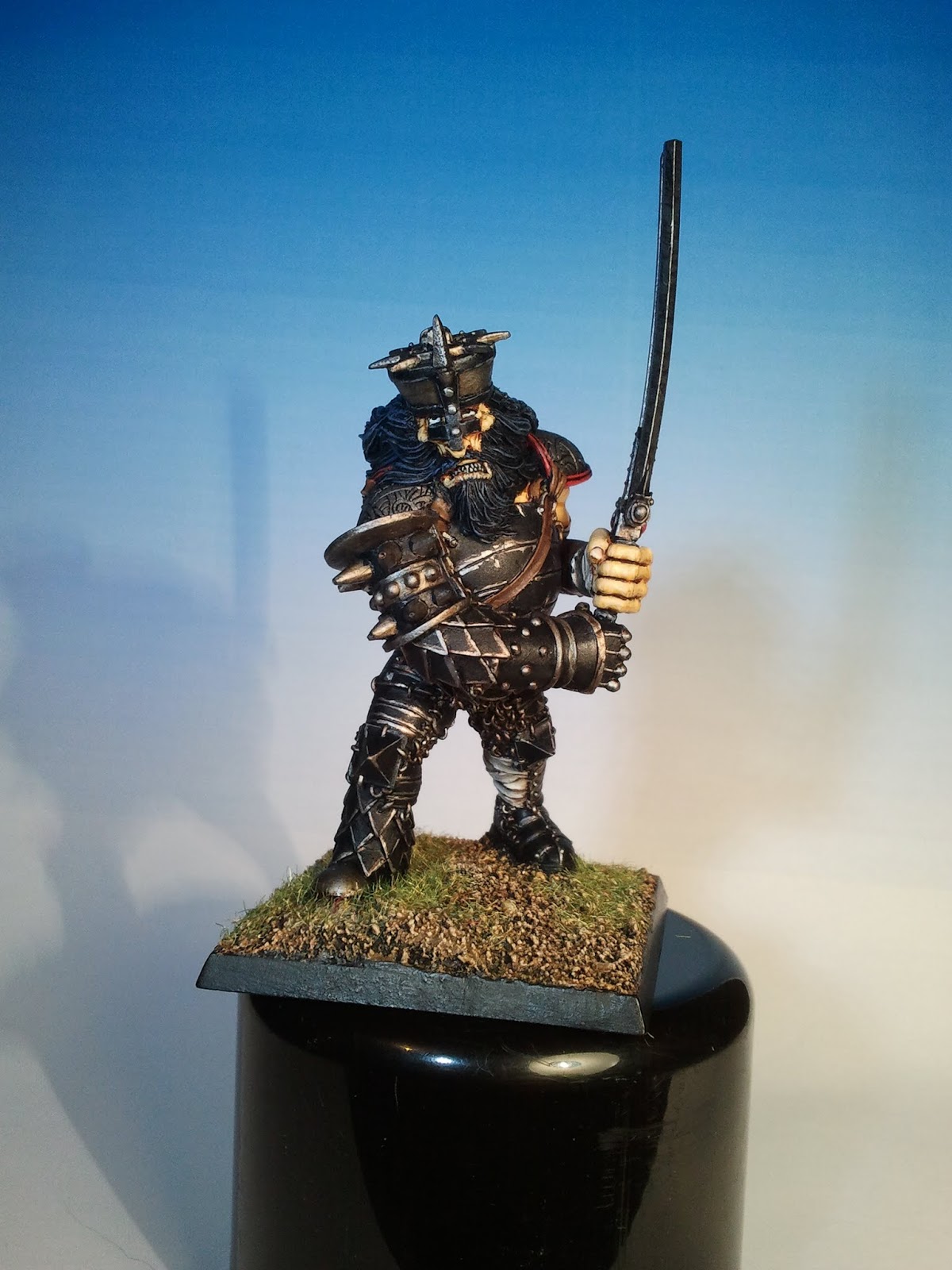 Yeah, I know, it sucks BIG TIME. No matter how hard I tried to get that one straight, it always got back this silly way. The upper part of the face and the helmet are of my composition though and remain quite to my taste apart from the fact I realised too late it made him look like a big-hat (giant) chaos dwarf...
If you wonder about his weird face expression, it's actually what I wanted to achieve since I was highly inspired by Death metal for this army and wanted him to look like Glen Benton from Deicide : 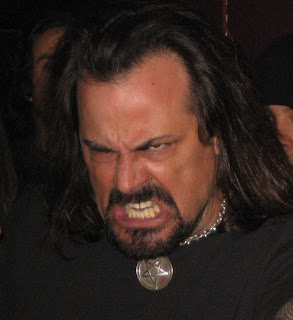 Next thing uncovered from the mists of time is my "Harry the Hammer" version. I got it the day of the release. The base is being used as filler for my undead units but has to be painted. I tried to be as subtle and realistic as I could on this one which proves to be hard to read (especially when poorly photographed). It was nonetheless a great joy to paint it and now, I wish I had bought 2 of them to try a more funky paintjob on it. 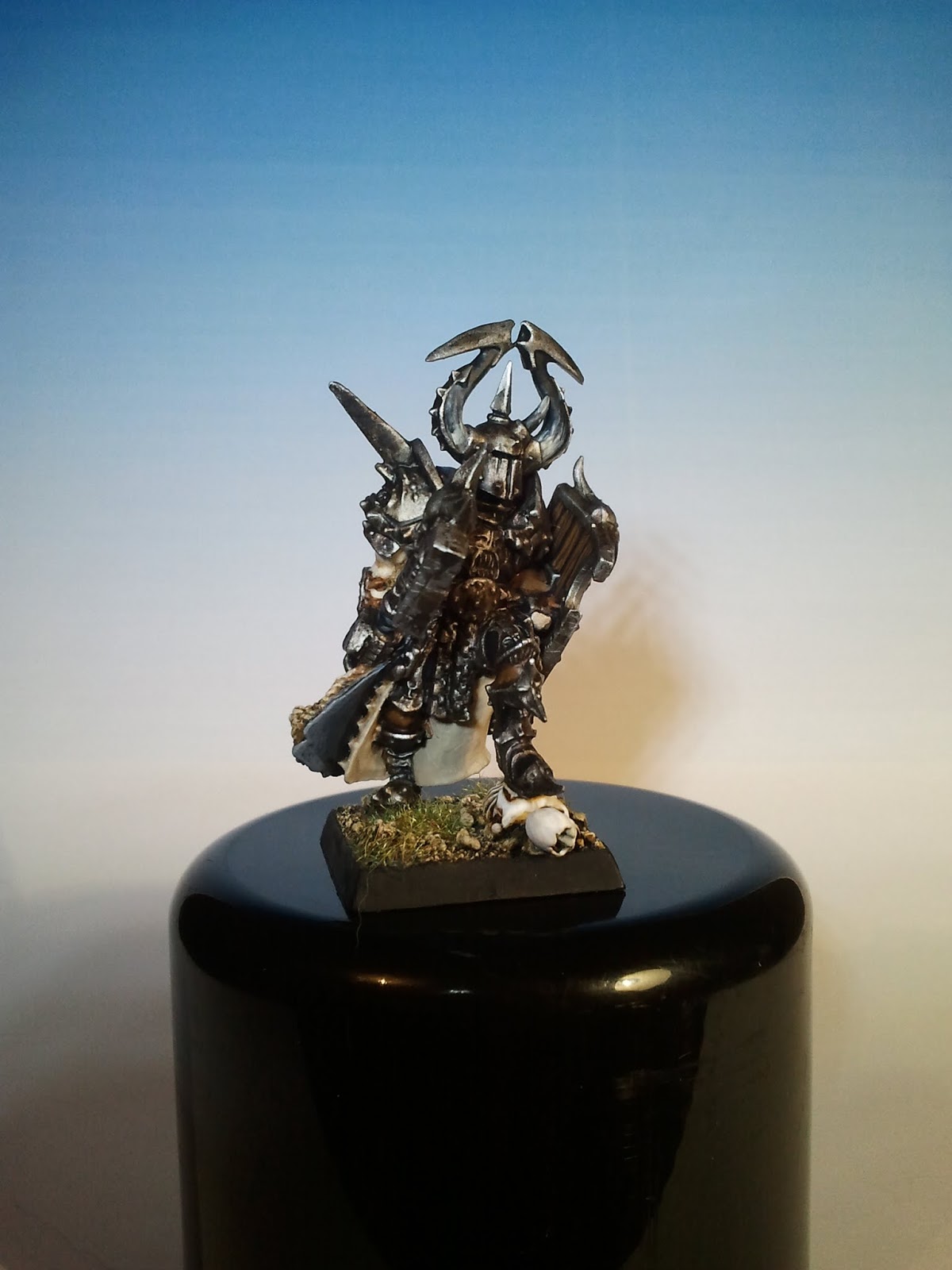 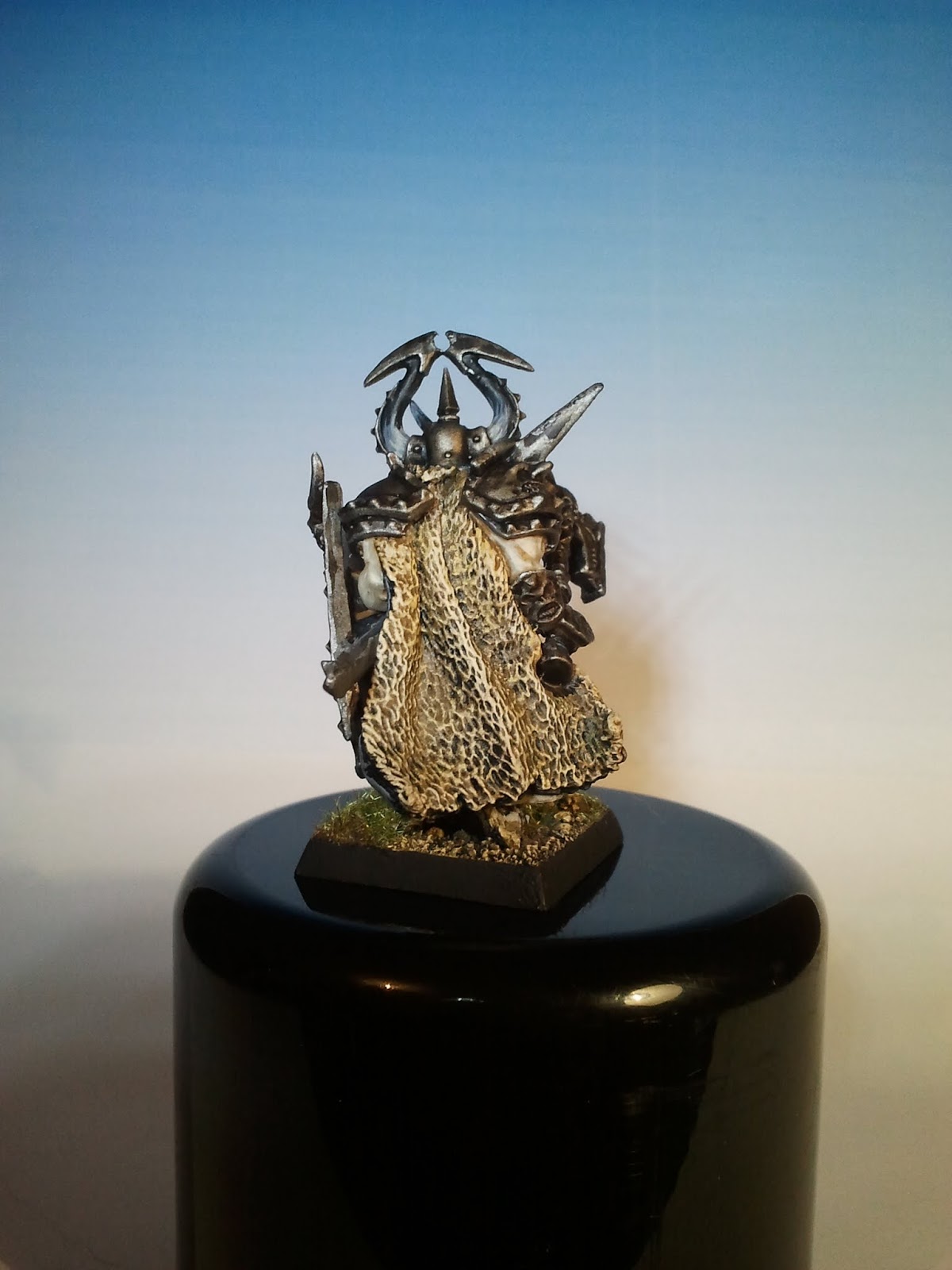 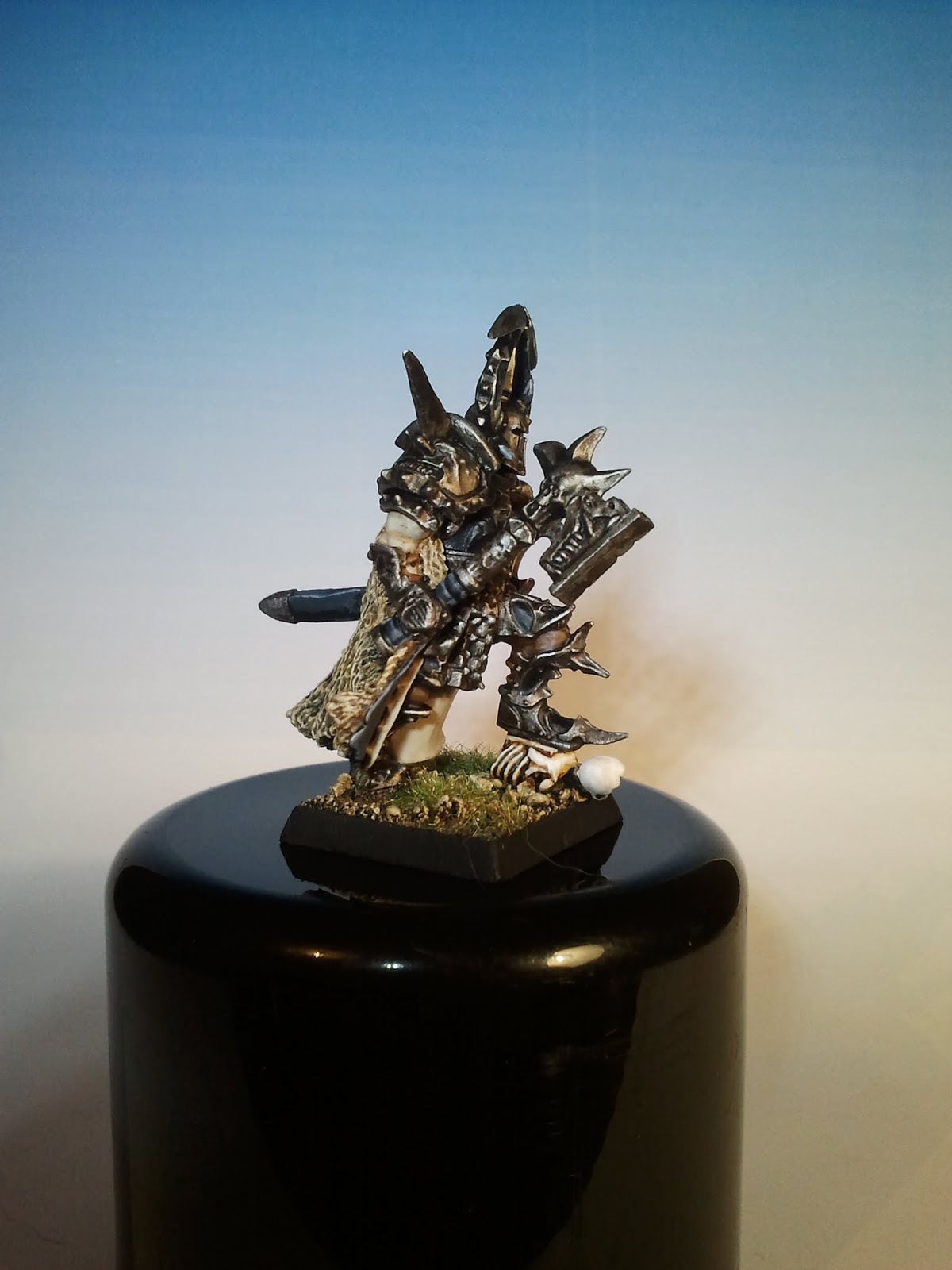 The avatars of war chaos champion is a model for which I have mixed feelings. I own the necromancer who was unfortunately rather badly cast and on the other hand the female vampire which is an absolute HIT for me. The chaos champion certainly has charisma but his ridiculously small feet and somewhat awkward pose made me paint him without really knowing what to do. I just painted him very simply like the rest of the army but it's unlikely I shall make hime the general of my army (maybe for some roleplay or some other project). 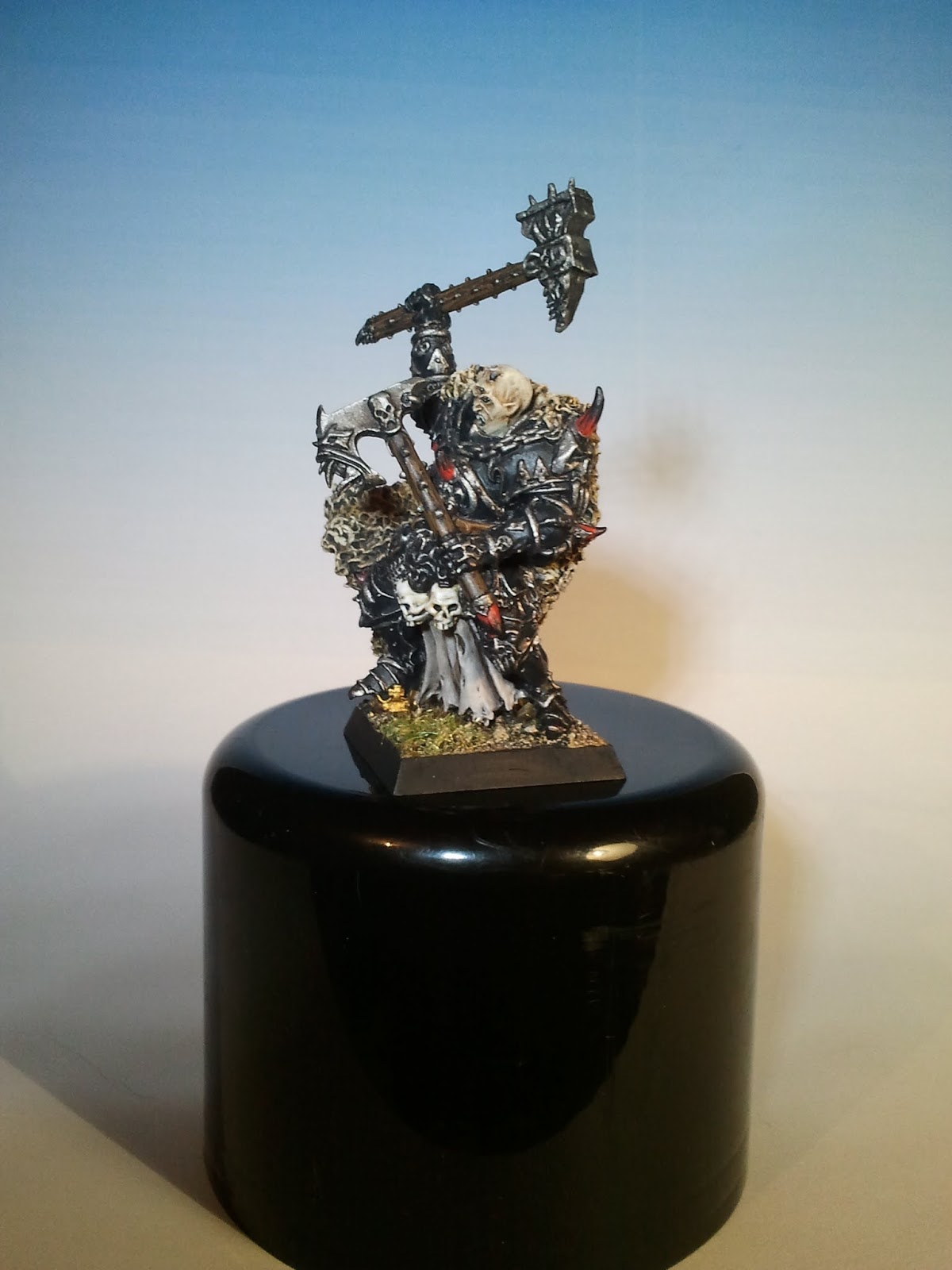 This one has been waiting for too long now. When I converted my 3 dragon ogres, I found myself with arms and heads on the hands. I decided to build myslef a shallot. Though I love Alex Hedstrom's models, his shallot doesn't do the trick for me. I wanted one like the one in the realm of chaos. i decided to get my hands on some carnosaur and some pieces do build a really bulky shallot. The pieces you can see are just assembled with blu-tac to try poses and I have to find good chain and a suitable eagle to try to copy the best I can the excellent one I saw when I was a kid. The blade is made from plastcard and is a bit oversized but I guess such a lad can hold somthing this big without complaining too much... 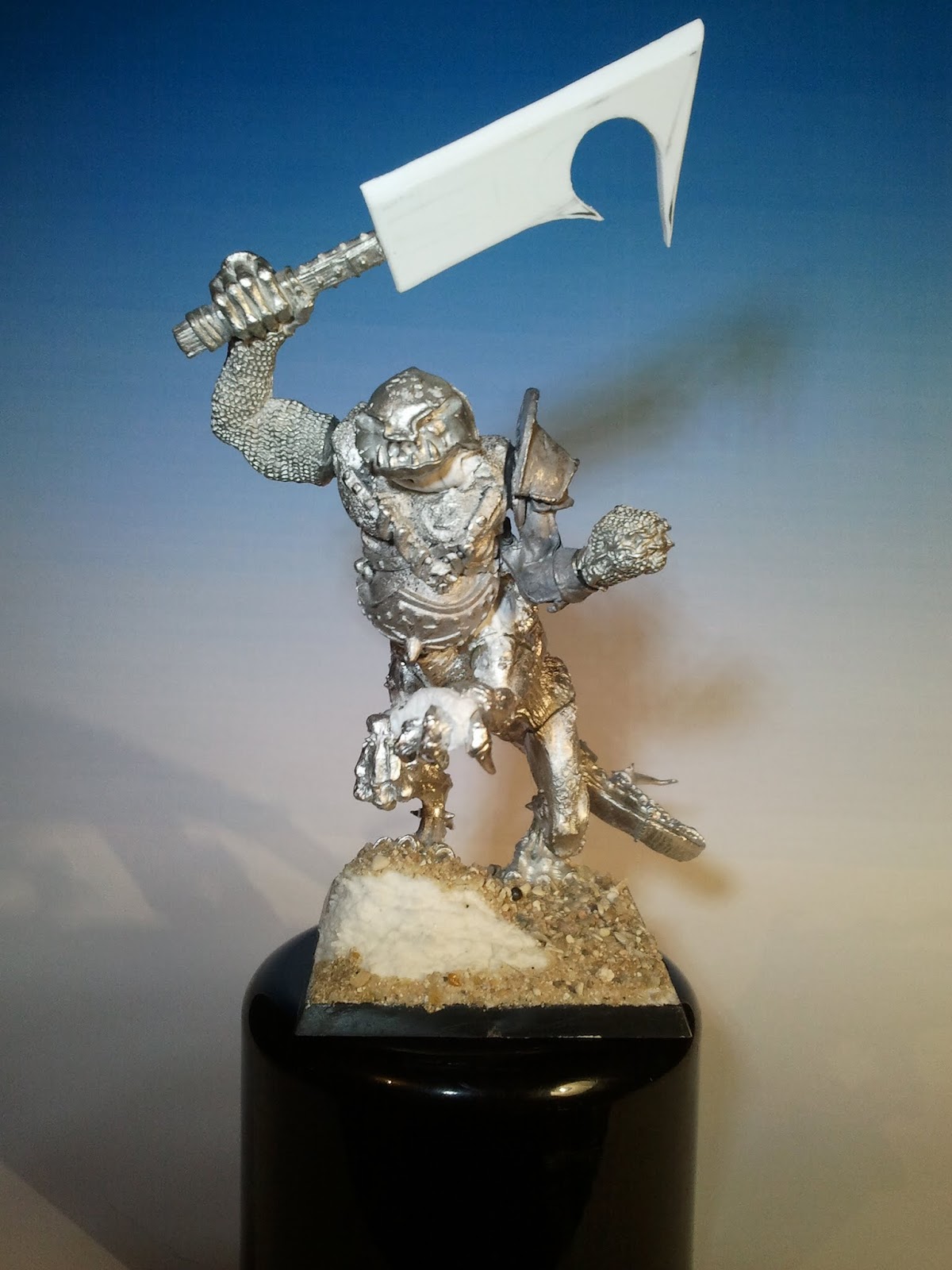 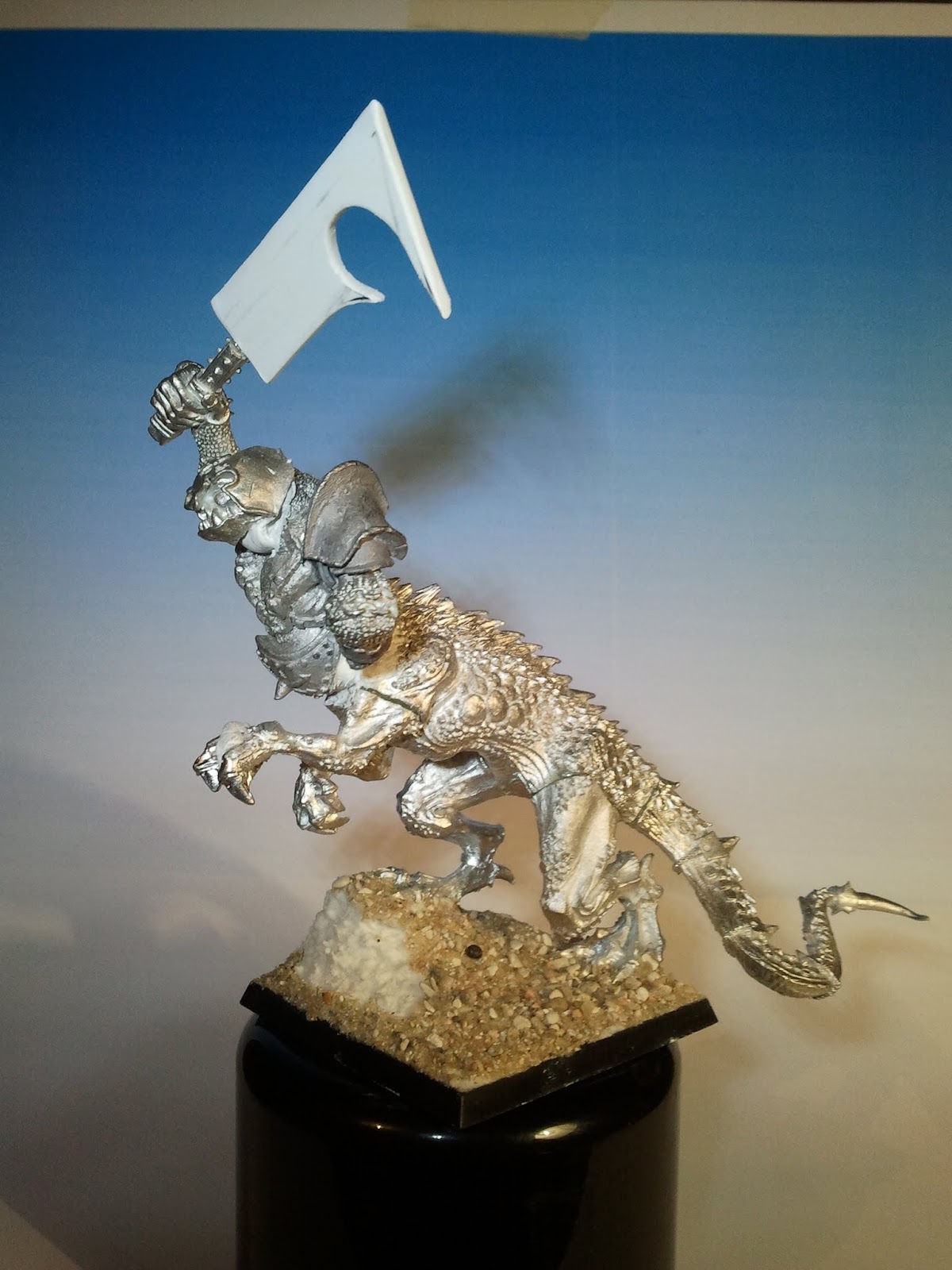 This last one, I believe a lot of you remember it if you bought the WD issue in which it was offered (or any other imperial wizard). It has the distinctive blood on th esward all my minis had at the time but as a richer background than others. Look at the red on it. This is hardcore gloss enamel (varnished satin later on) and the day I painted this one I shook the pot of red like a maniac without holding the top with my thumbs as I usually did.
The cap and all the paint of the pot jumped into my right eye.
I screamed.
I ran screaming to my parents with bright red pouring from my eye.
My mother nearly fainted.
My dad facepalmed and took me to the hospital.
A lot of people at the hospital fainted and I was admitted in top priority...

When the doctor discovered what had happened, he just laughed his ass of and got some product I don't really remember. He laughed because he was a hobbyist too and had experienced such a problem but in his hair. He washed my eyes (which looked for 2 weeks like if I had picked a fight with an ogre ).

Yep, my clumsiness and that little chap did just that...
For the record, I got to painting with acrylics the day after that, maybe without this incident I would have become the next Fraser Gray? Nahhh, I would have sucked anyway, but who knows?