Fresh blood and a tutorial for the champions of Law ! 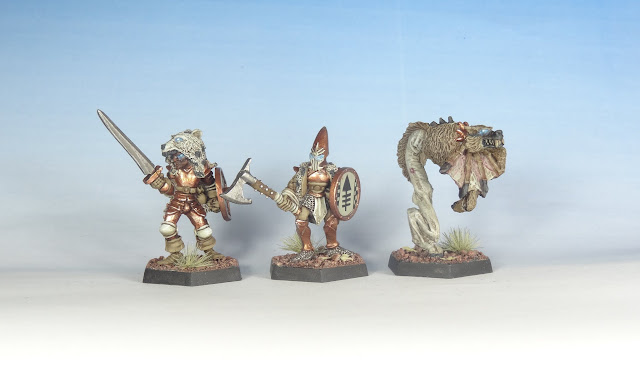 So here we have 3 more members for my warband of champions of Law ! Since I've been painting those for some time now, I'm thinking about making a break to avoid making this a habit or something tiring and since I'm making a pause I thought I'd do a little tutorial on how I paint them. Make no mistake, they're not up to high standards or anything and I intended them to be speed paints from the start but I find the recipes I used served the purpose of having a nice warband rapidly so why not share ?


As a little reminder here are the other posts including champions of Law :

Post one : The Test model
Post two : A new warrior
Post three : another warrior and a dwarf berserker
Post four : Heroic fighter from the old world and an elf archer
Post five : The limited edition warlock and Gladius from the heroic fighters

Just to be sure I'd stay in the theme, I selected models that were either chaotic or sculpted by Jes Goodwin. First on the left is Erekose from the Eternal champions range. I chose to give him a dark skin because I thought it suited the face and it gave some variety to the group with a slightly more tribal element (huge pelt over the head rather than one thrown over the shoulders).
The second one is a Menilbonean, still from Jes Goodwin and still from the eternal champions range as the archer before him.
The third is rather peculiar, it's actually a Khorne fleshound body and forequarters and head on top of a Bloodletter body ! The parts fitted so well together I couldn't help but glue them together. I really like the strange look it gives to the model and it enables me to have a sort of demonic creature in the group. I like to think that the patron god for this warband has somehow elevated a normal hound for the good services and that the creature is now a half humanoid and therefore fully grotesque. I owe the parts to the excellent Steve Casey who gave me a good load when I was looking at broken pieces for chaos conversions 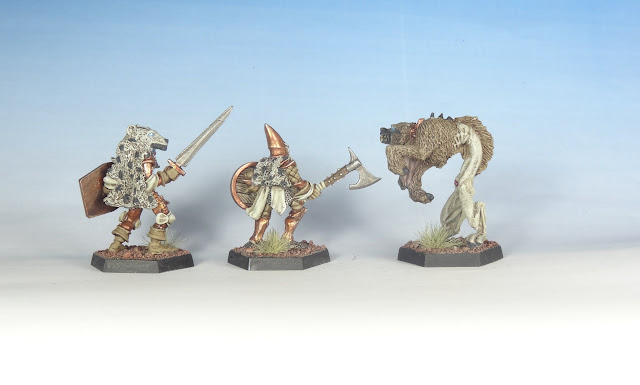 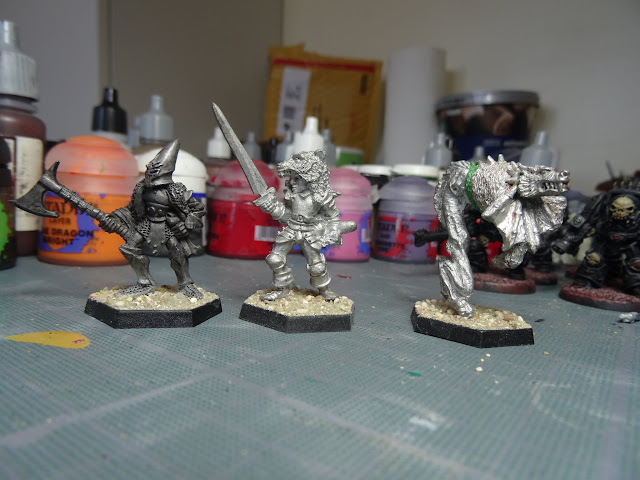 Then a sunny (and windless) day and a spray can of AP grey and you can reach the next step ! 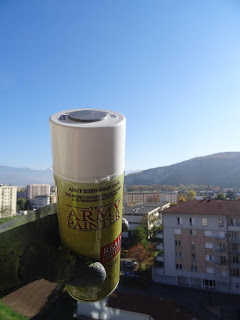 Models are primed in grey as most of my colour swill be earthy. I've come to prime most my models in grey now as I find it offers a good base for both bright and dark colours alike and it's often finer than black paint, leaving details in a better state than with other colours. The adherence is not as good though so you'll want to be careful with how you handle your models. 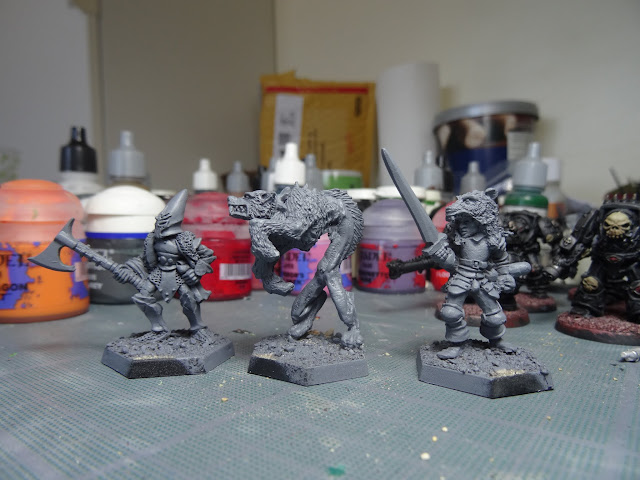 First step once the priming layer is fully dry is to give a generous wash of black thinned with water on the bases. This has 2 purposes : first one it to give good shadows when we'll drybrush the sand, avoiding to have sandy colours in the recesses. The second reason is that it seals the sand properly. The mix will melt the PVA that holds the sand and will let it dry in a stronger way. The base will be very fragile after this step though so you'll want to wait for a good while before drybrushing the sand. 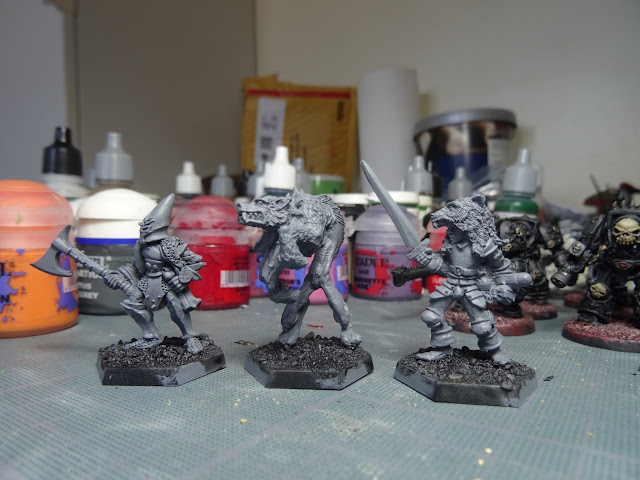 Once everything is fully dry, you can start with the drybrush, first one being a very coarse one with skragg brown (or similar) : 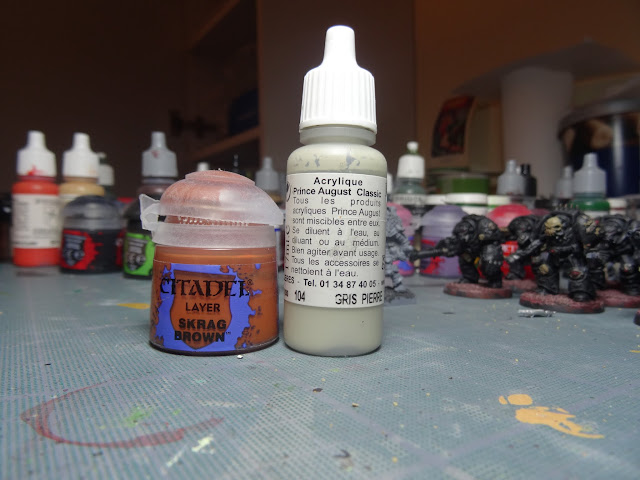 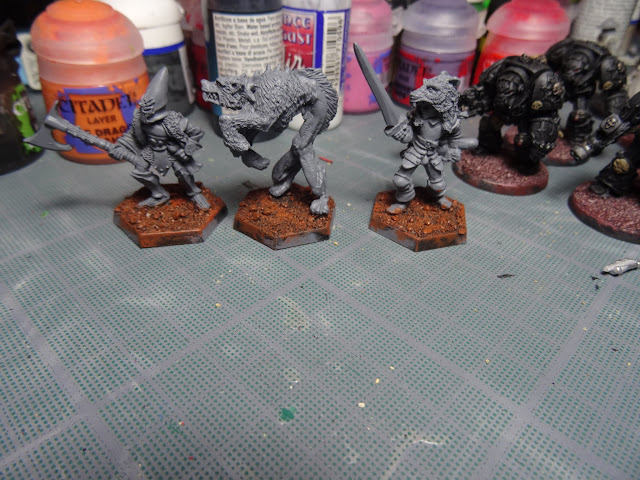 Second drybrush will be lighter with a 50/50 mix of Skragg brown and PA Stone grey : 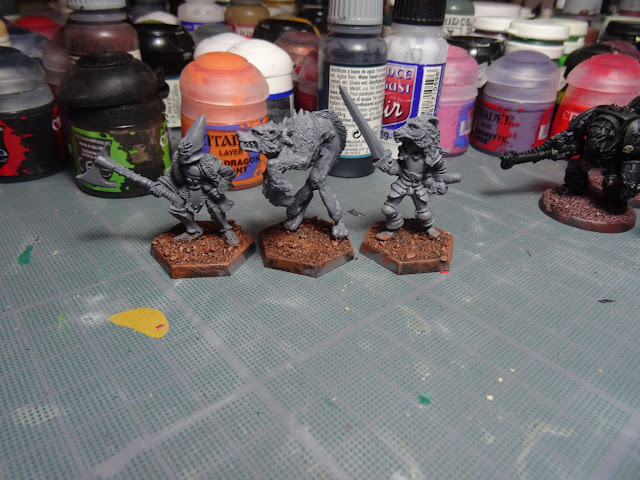 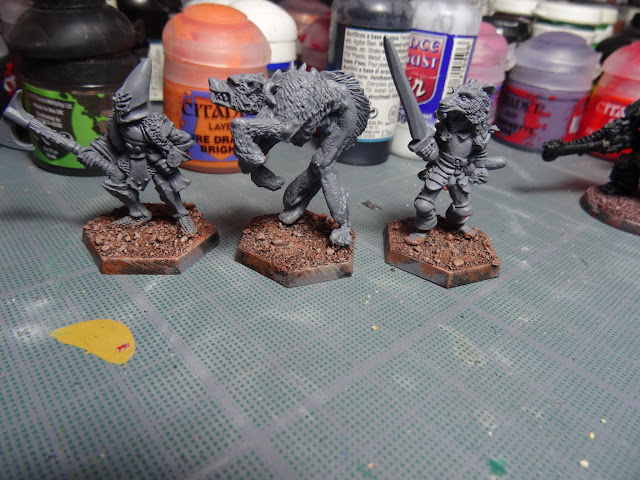 Then we can move onto the next step which is blocking in all base colours. This is not a process I use when I paint models in general but when I have a colour scheme that allows me to do it I sometimes do. As you can see below the base colours are somehow all related and earthly. This will allow me to save time so here we go, let's just paint everything flat !
(last pot has lost its tag but it's brass scorpion something from GW) 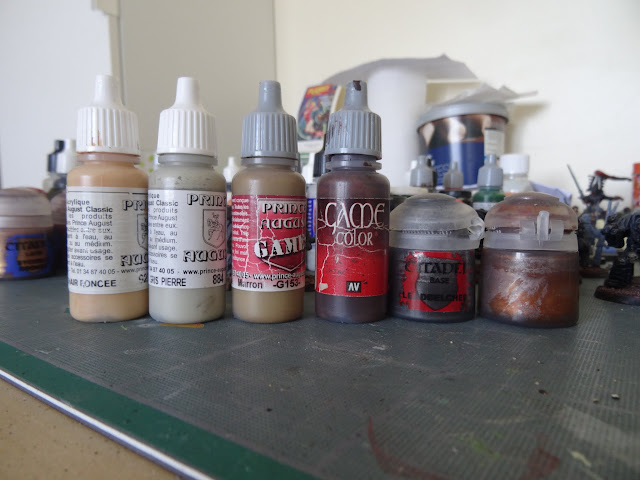 For this step I just ensure to keep things as I did on the others models so armour is in brass, leathers in brown and fabric in either white or brown depending on what I need to avoid conflicts with the other parts (hence why some models have brown hoods and other white). 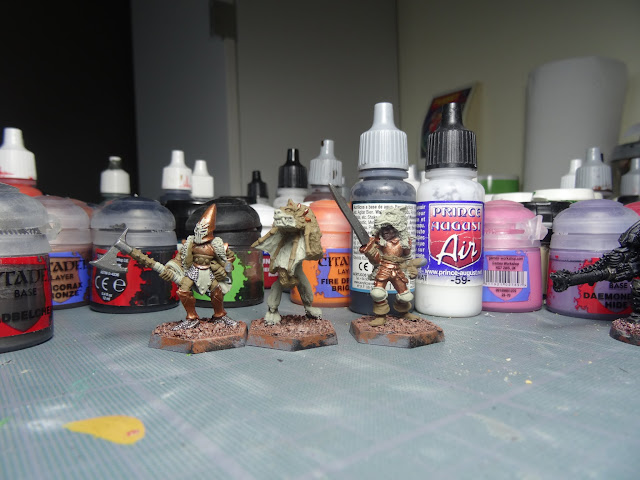 As you'll agree, models already look spectacular at this stage and could easily be varnished and played as is but let's ad a couple more steps to give a little 'je ne sais quoi'.
First help will come from a good wash with agrax earhshade from GW. Just dilute it with water (50/50) and wash the whole model (not the base though) with it. Make sure to leave no part unwashed but avoid at all costs any puddle. Take a fresh brush to avoid having any area drowned or you'll regret it and will have to deal with white areas where the medium has separated from the pigment. You can't use this shade too often but you can definitely use too much of it. 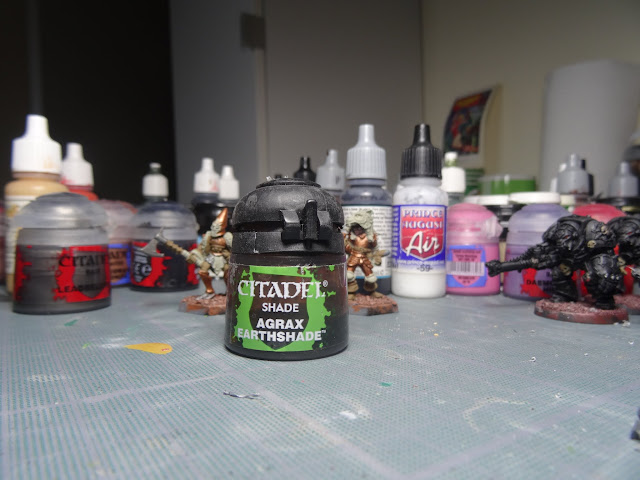 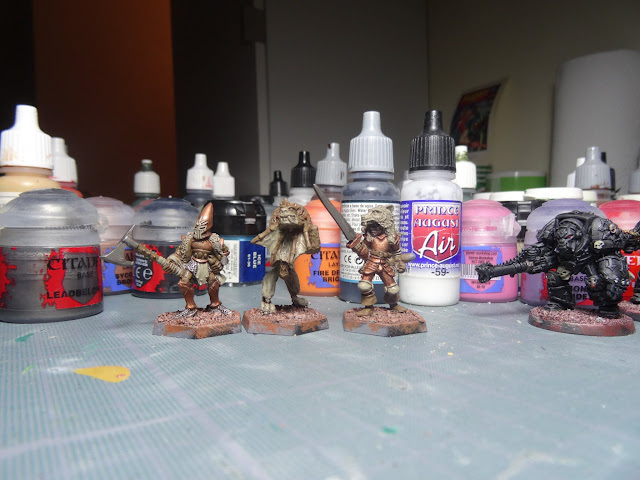 The wash being dry, it will leave the model dull but with the colours somehow blended. We're good to start highlighting the first colour. I opted for the off white parts as they include the furry parts that can be messy (drybrushes). I use 3 highlights with the base colour (stone grey) one with a 50/50 mix with white (PA air white here, favourite white so far even with a brush) and a light highlight with pure white to finish. 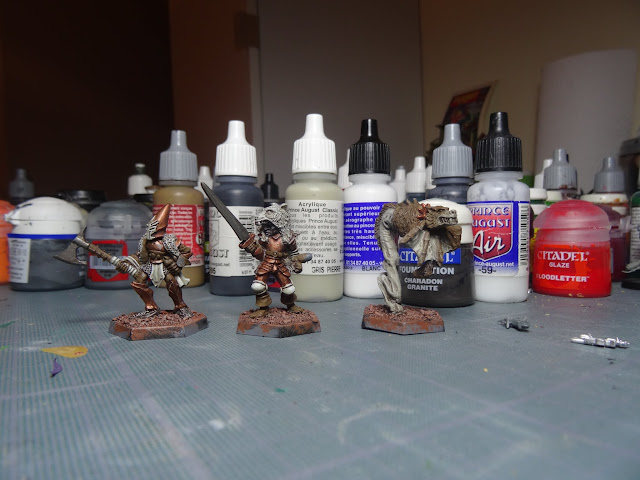 Nest step is the brown parts that are highlighted from my light brown  to a 50/50 mix with stone grey and a final highlight with a 33/66 mix of brown/grey. 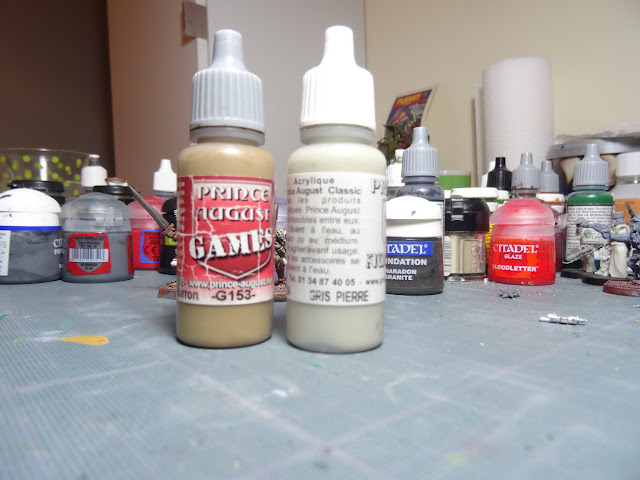 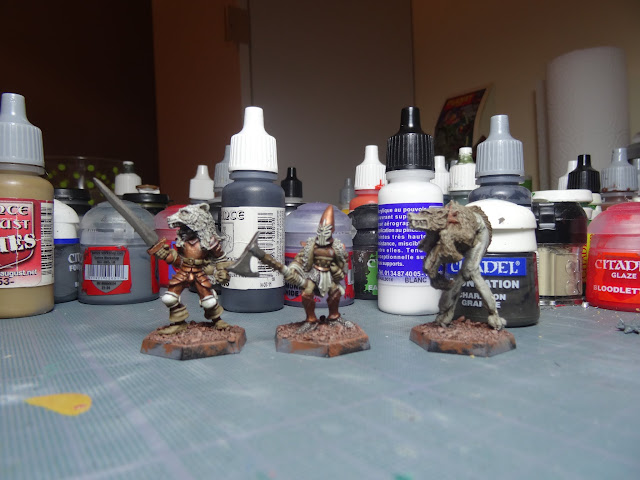 For the metallics, I wanted a very rich gold so I decided to cheat and start from a brass base up to silver with rich colours in between. For this, I use no mixes, just diluted versions of each paint to blend them by transparence. (first one on the left is still scorpion brass) 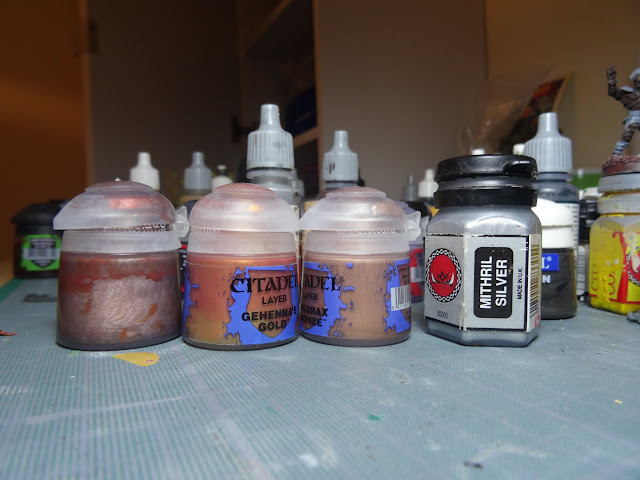 With the main colours blocked I can move on to the funnier parts and with one of the elements that have become a signature for this warband : the eyes. The technique here is based on oriented source lighting but with a cool and easy approach. Here are the colours I use for an electric blue effect : 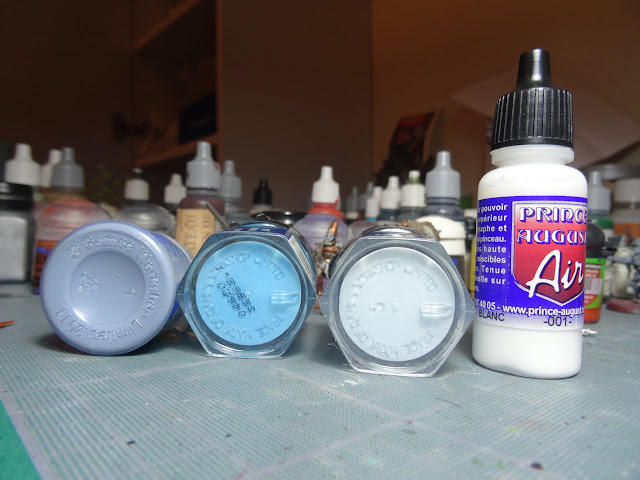 First step requires to thin the russ grey until it feels like milk and glaze all the parts around the eyes that should be hit by light if it was coming from the eyes, getting a little further won't hurt much so don't be too nervous at that point. 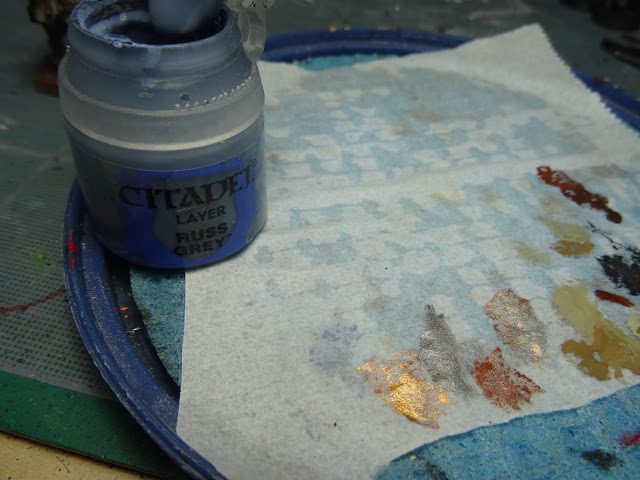 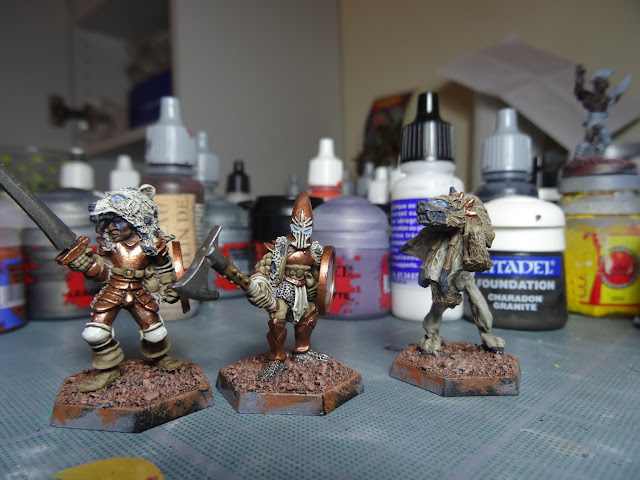 The second step will use the ice blue which will also be thinned a lot and be added in the recesses around the eyes (and all glowing parts). Do not go as far as you did previously with the light grey, halfway will be good. 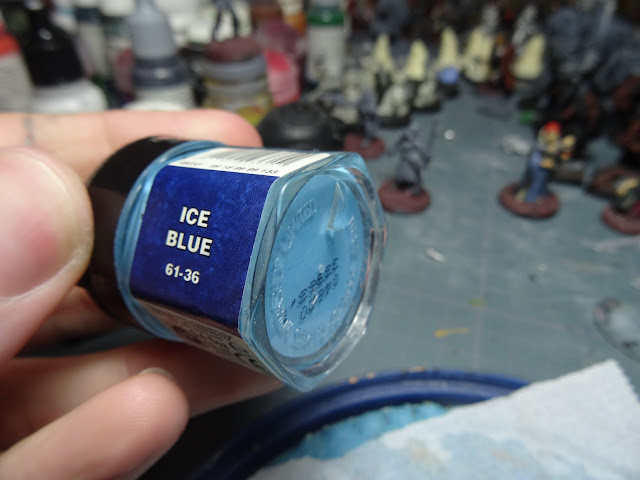 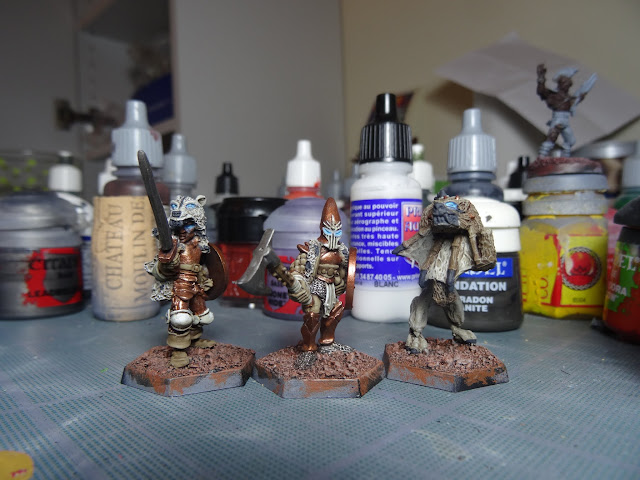 Next step, I'll use my electric grey which will go on the glowing part (the eye itself) and the very centre of the recesses (do not make it go any further). A touch of pure white in the middle of the glowing part will help give that contrast and feel I'm looking for. 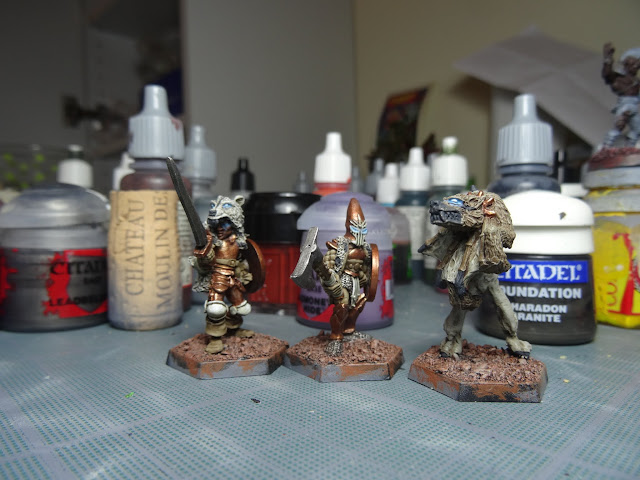 Once you have all that done you basically just have a couple of details like teeth, arrows or a couple of simple things to do. Shields are painted the same way as the rest but seperately and then freehands are added.
I'll also blackline between areas at that point to help define the models a little better and to clean a couple of transitions.
The final touch is to paint the base rims in black and add little tufts of grass and birch seeds (you can find those everywhere) to decorate the base. 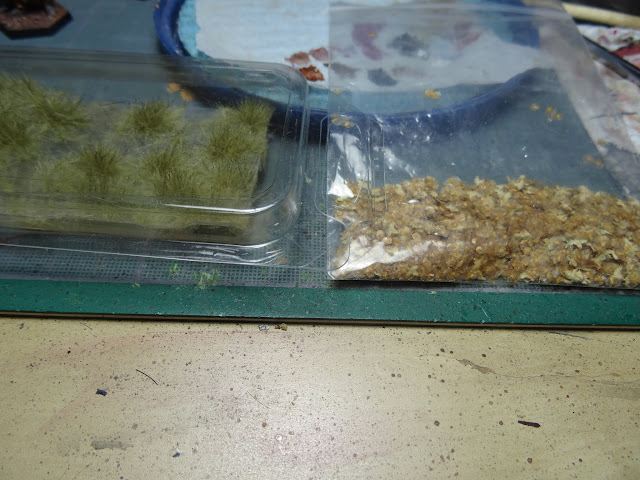 And here you go, a full warband for the champions of Law ! I somehow feel 11 is a good number for a warband of Law, it's a whole number and symetrical when written (even parrallel). Graphically and symbolically satisfying for now.

I hope you guys loved following this warband as much as I loved doing it ! It's not over as I want to add a beastman or 2 and some mounted character as well but for now I'll finish a couple of things that require my attention.

I cannot resist showing what I received the other day though : 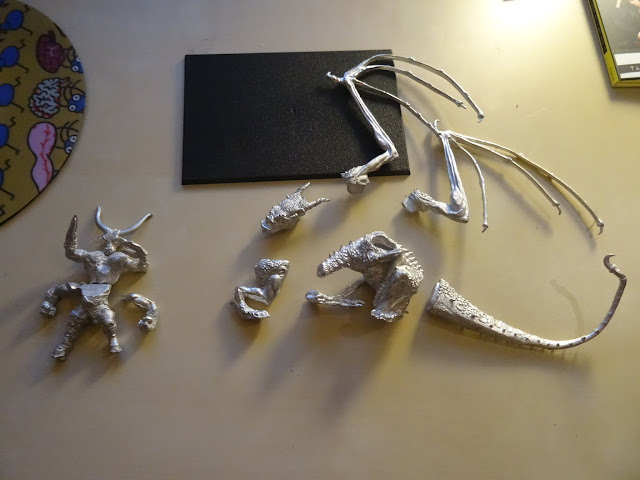 This baby will ot receive my attention right away, I want to carefully plan how I'm going to procede with it. It's in pristine condition and in all honesty it's quite a breathtaking model to have in hands so I want to things right with it.
Publié par Asslessman