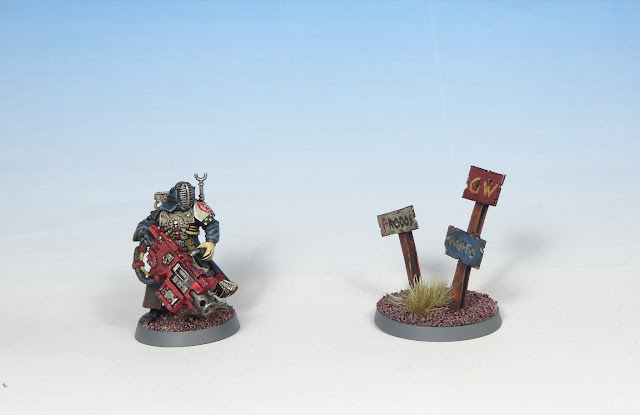 Alright folks, let's get something painted at last !

The model today is a little special as it is an entry for a painting challenge run by Morikun over his temple. Not only is Morikun a very fine fellow (for me at least but we'll talk about that later) but he's also organising this very impressive competition with prizes that left me speechless. Check out HERE to see what I'm talking about (the first 3 lots are especially grabbing my attention ^^)

So let me first borrow some suiting music to get along (watch and listen, this is fascinating)

The only rule for this competition (apart from it ending at the end of August) is that the model has to 'somehow' portray the blogger himself... "how arrogant" I hear you say ? Well it could be but there are actually no other rules and Morikun insisted on us using all our freedom of thought to try and depict him in the most original ways... that's a deal for me ! On top of that I think the prizes really show that he is generous before anything.

If you've clicked on the link to his blog, you will have noticed (unless you're really trying not to) that Morikun is even more obsessed with Japanese culture than I am. That's a start. French hobbyists will probably also know that though he generally is a very polite and courteous fellow, he can also be quite hot blooded and prone to rage (though most of the time the object of his wrath will be totally understable). A bunch of his posts are open letters to some famous names of the hobby so I thought I might use that for my ideas...

Let's sum up the basic ideas :

- Morikun loves Japan => Least of things is to base my model on some japanese concept and try to place his Mon (symbol that represents your family) somewhere on the model
- He hates many companies amongst which Games Workshop. While I don't bear the same hatred (or any at all for that matter) towards the company I thought it was mandatory to have it somewhere.
- Morikun likes to "shoot" down what he doesn't like with his "Napalm heavy Bolter" (he just likes to call it that way) just as he supports what he does like (reason why I wouldn't put him in the rage guys basket). So the model obviously has to carry a Heavy Bolter.

So here's my concept :

An ashigaru (light feet in Japanese) made from 100% of GW bits (how ironic I know) because Ashigaru who were first using lances and halberds came to use Muskets to shoot ennemies down. As Ashigaru were peasants I gave my model a nobler look to make him look like a samourai wearing Ashigaru equipment.

How did I give it a Samourai look ? Easy, I chose the head of Hoshi Komi (famous Blood Bowl Starplayer) who just happens to wear a Kendo mask (remember I like Kendo right ?) 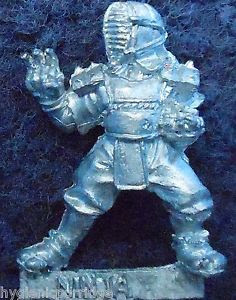 And how did I use that head ? Even easier ! PRESSMOULDING ! I'm glad I used this technique because it's one technique Morikun used quite a lot this year for his basing projects so it just adds a little link on top of the rest (every detail counts).

For the body I used one of the most recent kits : a Skitari kit from the adeptus mechanicus range of Games Workshop (which I primarily bought for the arms and fancy bits) and a heavy Bolter taken from the latest devastator kit (kindly offered by a generous member of the belgian community). I first tried to keep the backpack with the bullet chain but it looked ridiculous on the model and got rid of it. 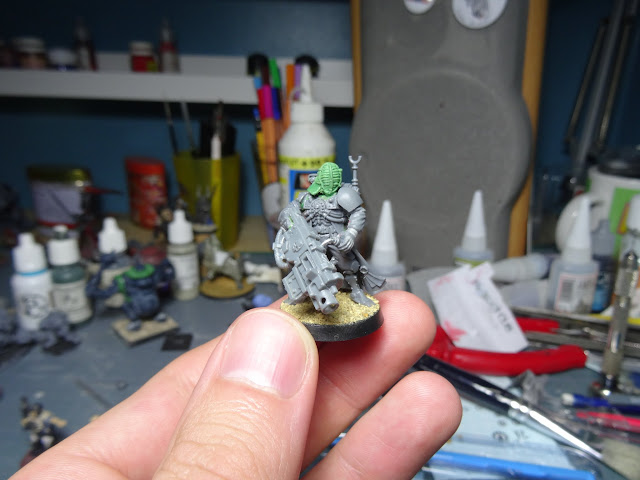 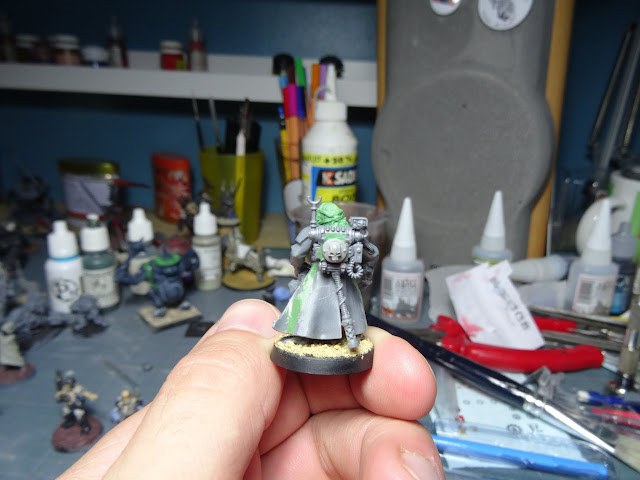 Painting wise, I had to say my hands were tied because I just happen to be the kind of guy that can't paint Kendo Bogu (meaning armour) any other colour than Indigo or white at best.

Morikun seems quiet but he's got his napalm rounds ready in the chamber of his heavy bolter to shoot anytime... ANYTIME.

As you can see I kept the indigo for the Men (helmet) and the coat, keeping an off white for the armour parts and trousers. I gave the feet a black colour to suggest carbon (it would have been either silly or ironic to have those in steel since Ashigaru means "light feet") and gave the bolter a good red for teh sake of contrast, to tie the model with some other I have and because it seems a natural colour to pait a heavy bolter with.
So here we are, just to sum up all the elements :

- the model is a space samourai armed like an ashigaru (here's for the Japanese theme)
- I used Morikun's Mon (on the shoulder plate)
- I used Games Workshop bits only just for irony's sake and used some of the most recent kits too for a double irony towards him and myself (since I'm usually more prone to painting old lead)
- I managed to place the names of his most frequent victims (being Games Workshop, Prodos Games and the french Warhammer Forum)
- the model is actually linked to 2 other models of my collection
- I used some pressmoudling which is a technique he used a lot this year.

Now for this challenge to be complete, we had a choice to write a little Haiku (in case of a tie), so I tried to have a go by getting my 5 - 7 - 5 syllabs verses with a slight autumnal touch :

Let me try an version in english if you will :

So what now ? Well I have another Samourai from space don't I ? After my Sensei and my cyber samourai here's a third member fro what could very well become a full team... (but you already know my plan if you're reading carefully).

It's actually quite funny for me to be breaking my painting hiatus with such a model but why not after all ! Next one will also be meant for a painting challenge (and I'll also have another one to do for yet another challenge) but soon the normal course of this blog will come back and I can tell you I have some pretty nice stuff coming ! (In my mind it is anyway).