Kaleb Daark the doomed one, he is back. ! 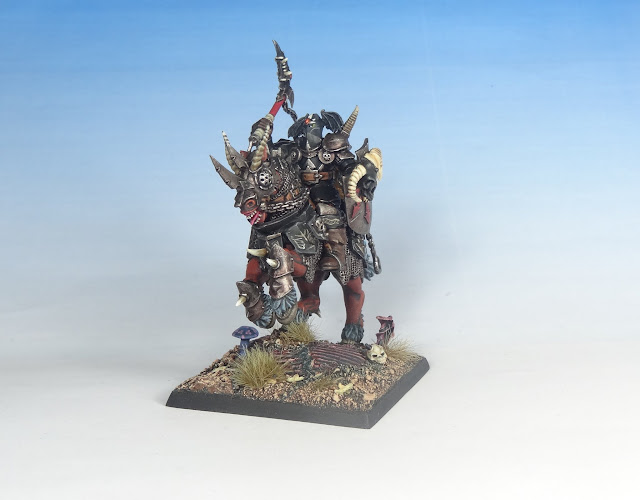 Kaleb Daark has always been a fascinating character for me (and for many people I guess), I won't go and tell his tale again as some have done it far better than I could do but I did paint his model a while back. Malal has alway been a fascinating God too since he was mentionned in warhammer RPG and a few publications but got erased for some sordid IP reasons.
The appeal of both is still very strong and from time to time, small details can ignite a barrel of renegade god fuel. For me, it started all long ago with this tiny bit : 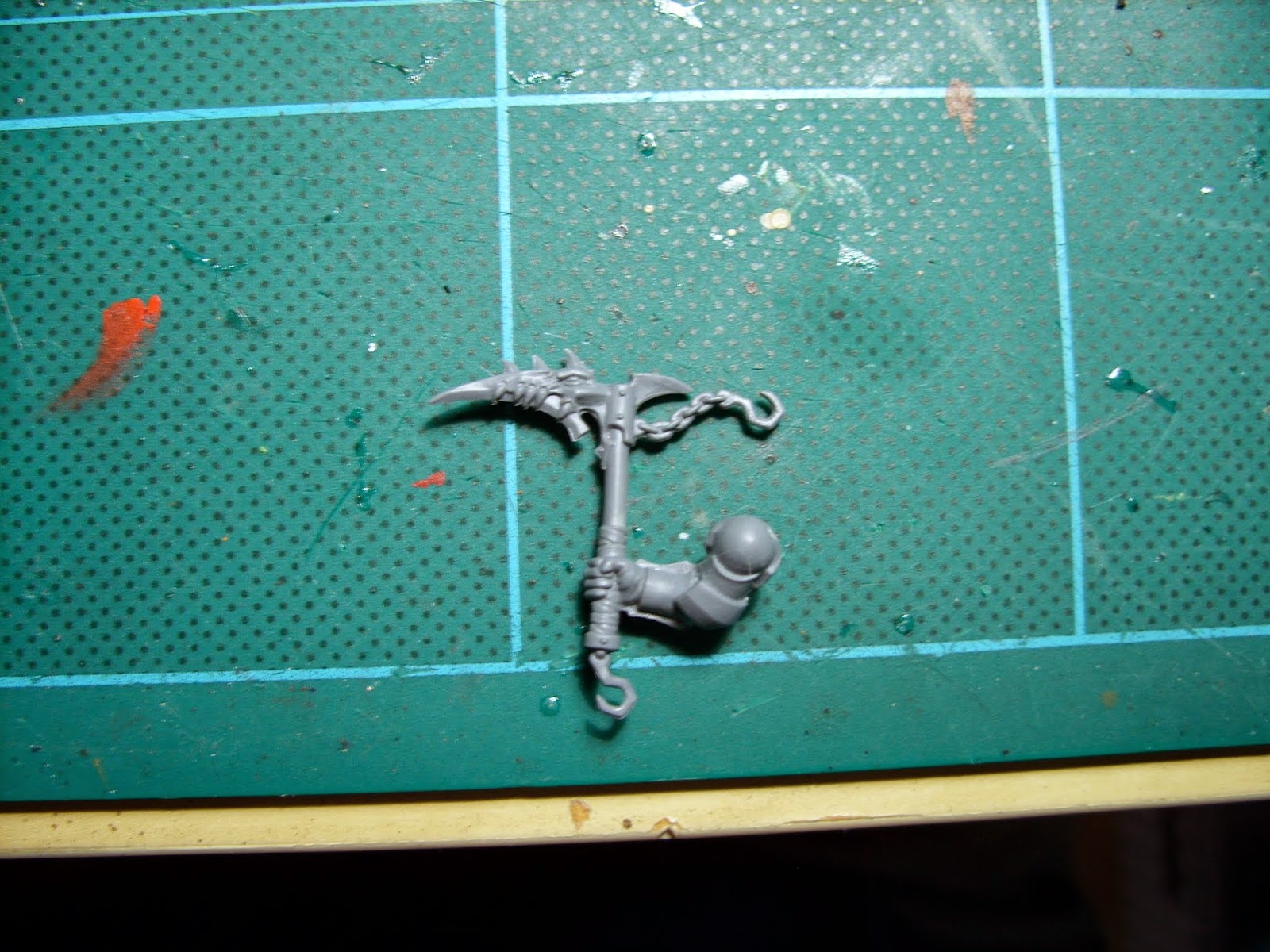 
As explained here I felt compelled to recreate a full Kaleb from this tiny little plastic bit (that's usually a bad start for a project). You can see WIP shots of the construction in this post. The construction was quite a fun process and when came the painting part, that's when things started to hurt... 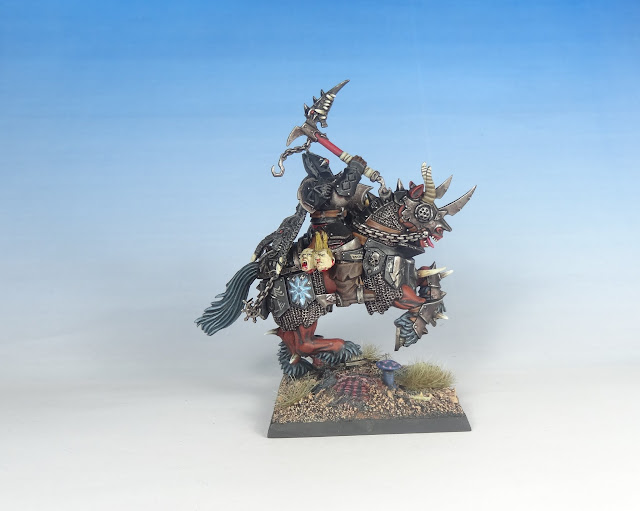 It took me 6 months to get to the basecoat stage and a year and a half to get it to something finished. Thanks to some kind folks who helped me focus a bit, I finally decided to pull my fingers out and finish him for good.
The real problem is that as it had been started quite a while ago the painting strategy (or lack thereof) mad eme reluctant to get back on it. I would not have done things now the way I did them back then and that proved quite irritating... But since only finished projects count... 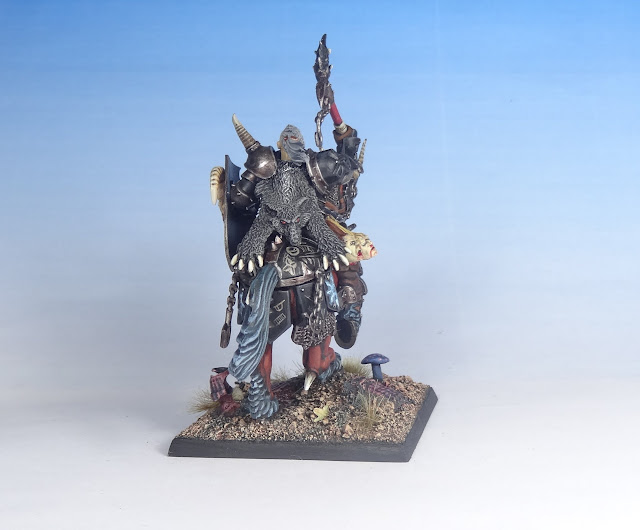 As you can see, the model I built is a loose interpretation of the original as it never was my intention (or in my ability) to recreate a scaled up version. I really just wanted to know how an updated version would look.
Below you can see how old Kaleb fares next to his younger version : 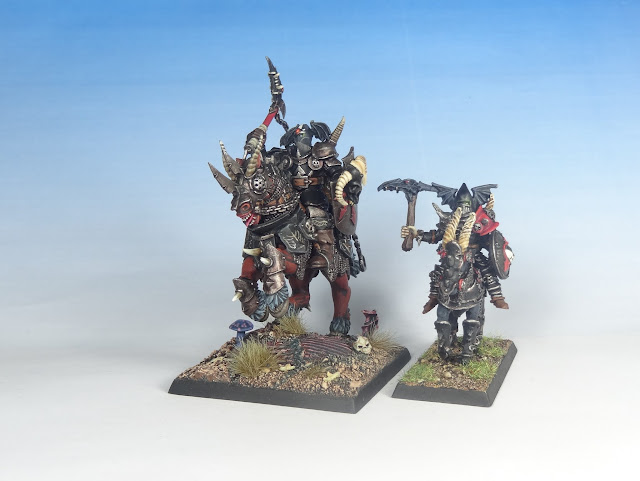 It's interesting to see that the original suffers from the 2D syndrome but the plastic version suffers from an other equally unpleasant syndrome : it's rigidity. No movement really thoughI did try and pose the model as best as I could, getting the most suitable horse and all but there's a limit to what you can achieve just by placing ready made bits without altering them..


Painting wise; the colours chosen have been the source of a lot of thoughts as explained in this post. I basically ended up using the marine blue on almost all parts from skin to armour, hair and even the ground mutations. I realise I could have gone further by adding some into the metallics but the contrast with the warm skin and leathers is looking good I find.
Using 2 opposite colours like that in the skin is not something I'm used to do but I'll certainly repeat the experience : 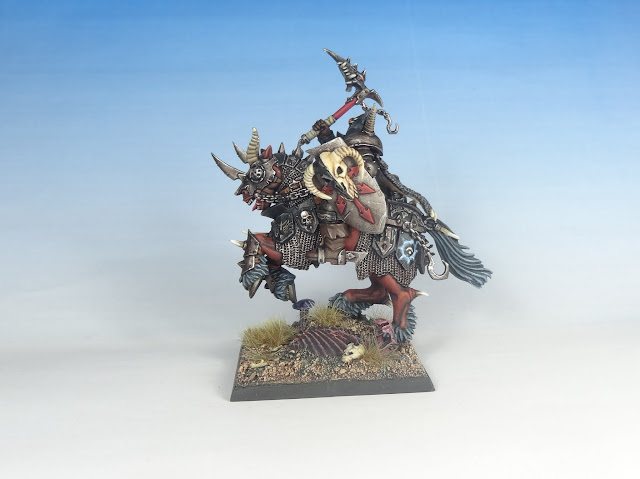 But let's get to the whole point of this all : Magnets

This was not the first time I was playing with the magnetic magic so I thought this would be the perfect occasion to save some time and have something cool at the same time.


Magnets not only allow to share the same body with both on foot and mounted versions but they also let you slightly change the pose : 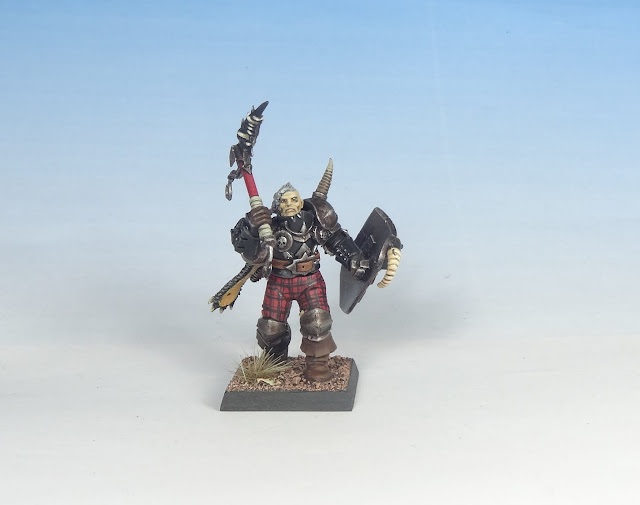 The foot version is probably the one that differs the most from its original I suppose but still I quite like it, the head looks nice and keeps the asymetrical haircut favoured in dark times. 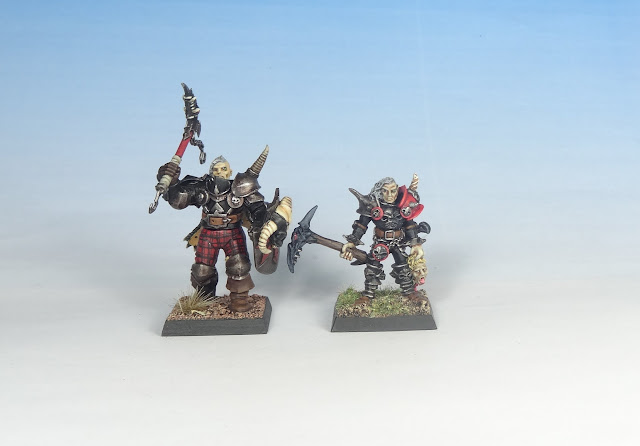 And here's a pic of all bits I made, you can note that on the far right lies an undead version but it's been quite a chore to work on that one and I have partially abandonned the idea of using it. The mood might come when I'll want to finish it but not for now... 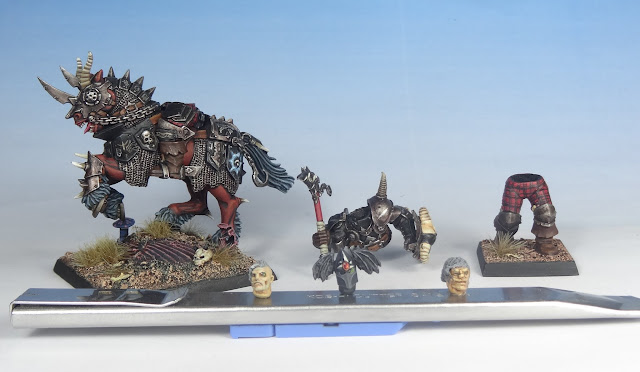 In the ned I'm far more pleased with it than I thought I'd be considering it's a project that lasted over 2 years with all the frustration it can lead to. Many things could have been made better but things could have gone worse too so I'll stay with the idea a model done is a good one.
That's all for now friends. What will the future hold ? No idea I'm sorry but painting wise I will try to clear that mountain of partially finished projects to start afresh (and for sanity's sake).
Publié par Asslessman