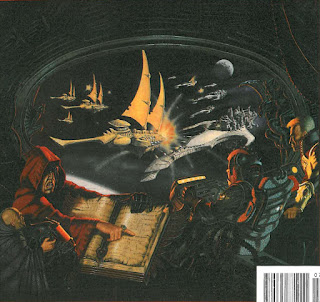 OK, after talking about the previews of "Battle fleet Gothic" in WD119 (1989) in the previous post,  I'd like to develop a bit further on the game itself and how it evolved. The previous post and discussions around it (either on this blog or on the GW specialist Facebook group) have enabled to gather a bit more information on the whole story thanks to  Evo Von Himmel who playtested it at the studio back then and Andy Chambers who supervised the release of battlefleet gothic in its later incarnation. 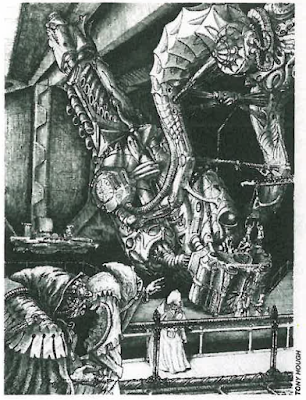 Evo Von Himmel :
"There's actually a further layer to the game's history. I playtested the 'original' BFG in about 1990, prior to SpaceFleet being released, when I was working at GW.

The rules were incredibly complex, and involved lateral thrust, and protractors(!), from memory. I helped run a demo game of it at the Nottingham store. The version released in 1999 bore little to no relation to the original.
(...)
From what I remember, the released version of BFG was a total rules re-write. I playtested both it and Confrontation at about the same time. Strange that it took nearly ten years for the new version and Necromunda to be released, and both were changed utterly from what I tested!"

Andy Chambers : "Just to round out the tale a little: When I started at the GW studio in 1990, Richard Halliwell was working on a spaceship game entitled battlefleet gothic. There was all the concept material you've seen, a plastic Imperial ship and a plastic Eldar ship already made for it, I loved the concepts from first sight, but the game was honestly not great and it never got anywhere. Andy Jones and Jervis did spacefleet a few years later to get some use out of the unreleased plastics. I tinkered around with doing a tabletop battle game for spaceships in 40K for a number of years (it started out being card driven), developed it in my own time and eventually managed to persuade studio manager Robin Dews to put it on the schedule. Because I'd always liked the name and I wanted to honour all the preceding work for it I asked that it be called Battlefleet Gothic - an easy sell since there had already been vague disappointment around the studio that the original never happened. I believe the tri-tail Eldar ship was a conversion, I might even still have it somewhere."

We now have a clear view of where the game was heading then and the similarities with confrontation and its rather complex ruleset (released at the same period) is even more surprising.

So how did the game evolve then ? The gamebox contained all gaming material for a quick and easy games playable by a younger audience as a sort of introductory game :


That meant the rules must have been pretty considerably changed... Well the rulebook takes a whole A4 sheet (with cover), you basically can't get simpler than that : 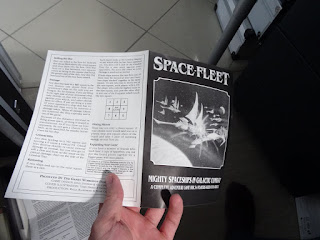 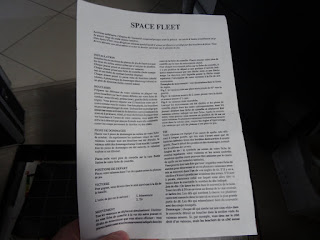 BUT, it also came up with a 24 pages A4 booklet with most of the advanced rules from WD 139 to WD141, a chance UK gamers didn't have as their only choice was to take the pages from their White dwarf magazines. French got a very well translated set of rules (rare enough to be mentionned) ordered and published in a convenient and pleasant small booklet, great job really. 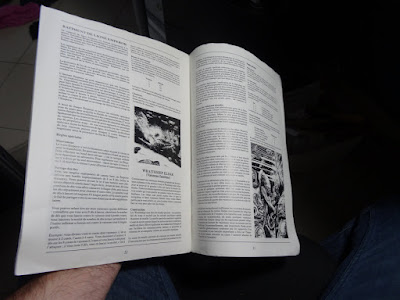 But what was in the advanced rules ? Well first of all the complete rules for loads of new starships but also  loads of background material. The real thing is it didn't change the gaming mechanics but just made them a little more refined and allowed you to add depth with unusual ships and a form a progression for campaigns but always in a very straightforward way. A notable feature is that unlike many other games, Space fleet is based on simultaneous turns instead of alternate ones, with the help of "computer helms" on which you assigned orders to your ships/squadrons.

One of the things that didn't change is that the "hits" still had to be determined by throwing some D6 into the box cover... I have yet to find a single person who liked that part...

Now though this had always kind of annoyed me at the time I could have let that go for nostalgia's sake and for proper oldschool credibility. The only tiny issue with it being that my box has "aged" a little... 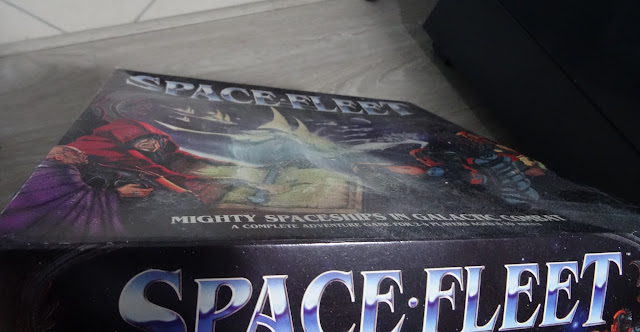 Well "aged" might not be the proper term here... DESECRATED would seem far more adapted to the situation... See that stain right in the middle ? Yeah that big yellow stain with the nauseating ammoniac stench and the wrinkled cardboard... 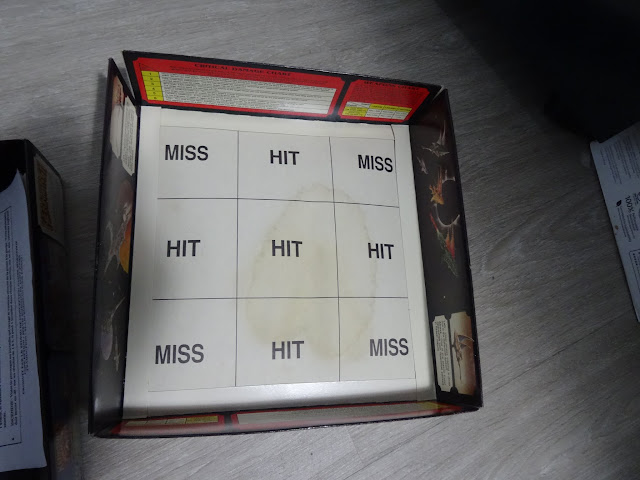 DAMN YOU, YOU STUPID CAT !
But to make things right I just found another way which would hopefully please everyone. I simply placed an order at Impact ! who quickly delivered me the solution I had wanted for so long... As the grid has 9 parts and that there are no cheap D9s to be had anywahere, I opted for D18 which will serve the exact same purpose.


Just throw a 8+ on these babies and you get the same result (and I do NOT want to hear about math freaks telling me about the bias of bouncing on the sides...)

But back on track, what did the advanced rules bring ? They were published in WD139 from the initial release of the game (July 1991) until WD147.

Contents were the following (info stolen from some forum I can't trace back) :

The handy thing was every ship had a simple data card with all special rules and characteristics :

And also gave you bits of essential knowledge about the 40k world as this chart explaining you the minimum and maximum "warp" times for a given "real world" distance...

Model wise, the 3 different factions were not really balanced in terms of variety and style...

The Imperial fleet got the lion's share of course with a big dozen of different ships from huge Emperor Capitol ships to small cobra destroyers. You can see the full collection on Solegend (from which I took all the pictures below).

In terms of style, the ships pretty much all fit with Jes Goodwin's sketches and rulewise some are really interesting with some having powerful weapons but no shields, some other the opposite and so on..
EDIT : Thanks to Ian Wood for pointing that a bucnh of teh ships were actulaly repurposed from older ranges, these are mostly the ones with no "Goodwin gothic touch" in the picture below.


Funnily enough, the eldars only got 2 ships in the whole process... a very strange thing considering how gracious and evocative these are... Considering there were no previous range to repurpose for the occasion this probably lead the studio to keep with a small amount of new ships for them.


And then the Tyrannid fleet. Now this may come as a surprise to see the tyrannids getting so much attention in this game when they were not really as well suited in Rogue trader with only few references (compared to the eldar at least).
Well the main reason is that a good amount of models were directly taken and repurposed from the Star Cruisers range.

But what now ? Should I go into details on how the game evolve to become Battlefleet gothic again ? Well to be fully honest, I did try Battlefleet gothic a couple of times but it needed some commitment for me (mostly in terms of models and time) and I never got round that part so I have to say it sort of passed me by...

Now I still feel strongly about Space fleet and its simplicity and it also visually refers more to the Rogue Trader aesthetic I favour... So all in all I managed to get my hands on a fistful of ships from which I'd like to make 2 roughly equal lists to have some fun. Being a game you can play with younger ones, I'll hope I'll have the models ready (and the kids too) in short a notice enough to live this bit of gaming nostalgia again... 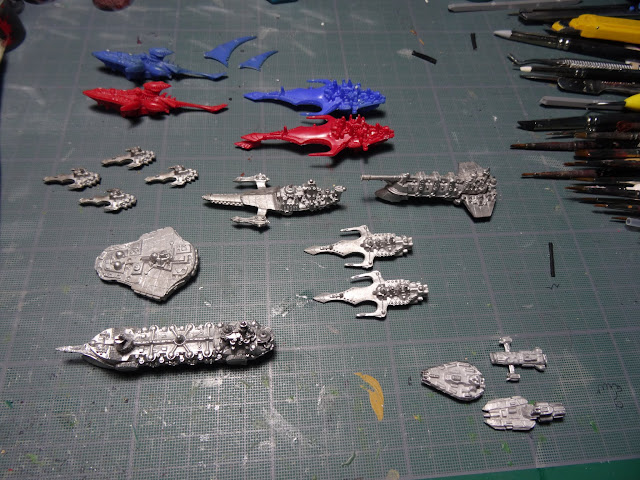