Fight for the sarcophagus : Realm of Chaos Battle report

Holidays are not necessarily full of good hobby opportunities since they basically imply being far from models, paint and other tools. On a other hand they can mean getting closer to other people you'd love to meet. That's what just happened to me the other WE when I arrived in Montréal Canada where I got to meet Iannick Martin from the "Of Marauders and citadel" blog.

My last game of the 3rd edition of Warhammer Battle was 23 years old and getting back on track with  Realm of Chaos games felt like the best plan available.

The icing on the cake was I could finally get to game with the warband I designed for the Realm of Chaos warband challenge on the Oldhammer forum. I would be facing his Nurgle warband... 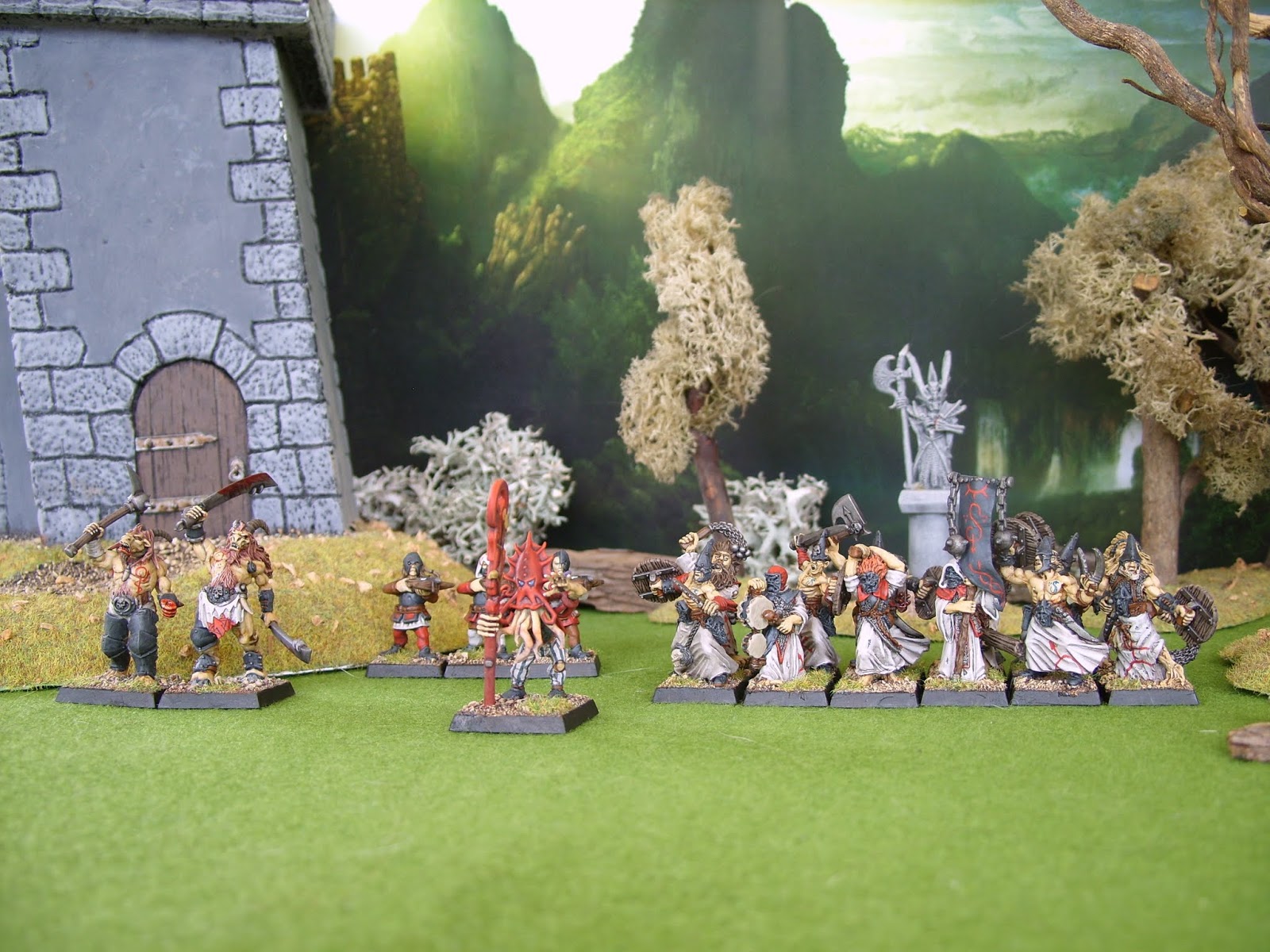 We used the scenario generator from the Lost and the Damned book and Iannick came up with his :

A treasure hunt would be a perfect start ! The Duke de Blangis (my Slaanesh champion) and his crew would need to prove their worth to get their hands on some sacred relics (or possibly fall into some leathal trap). 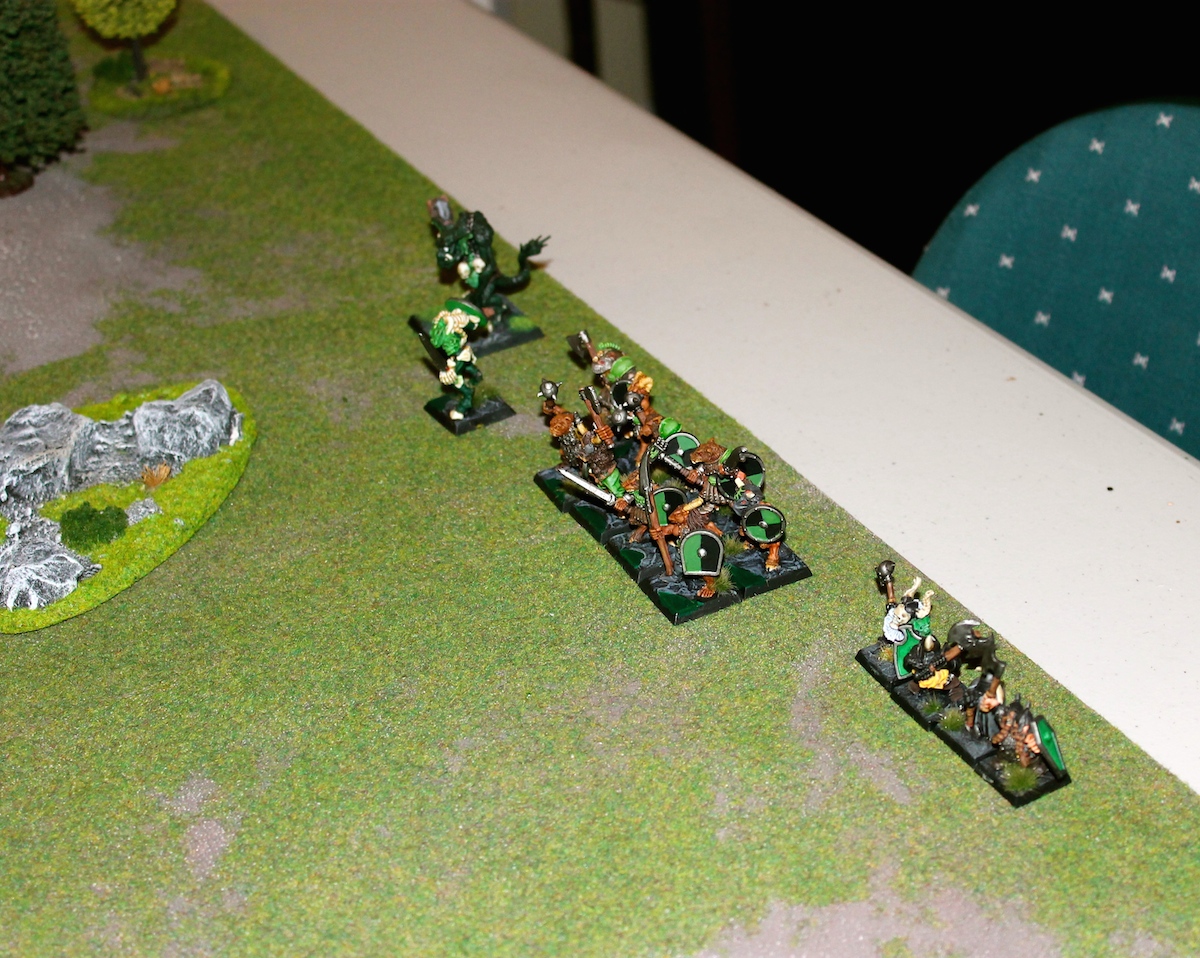 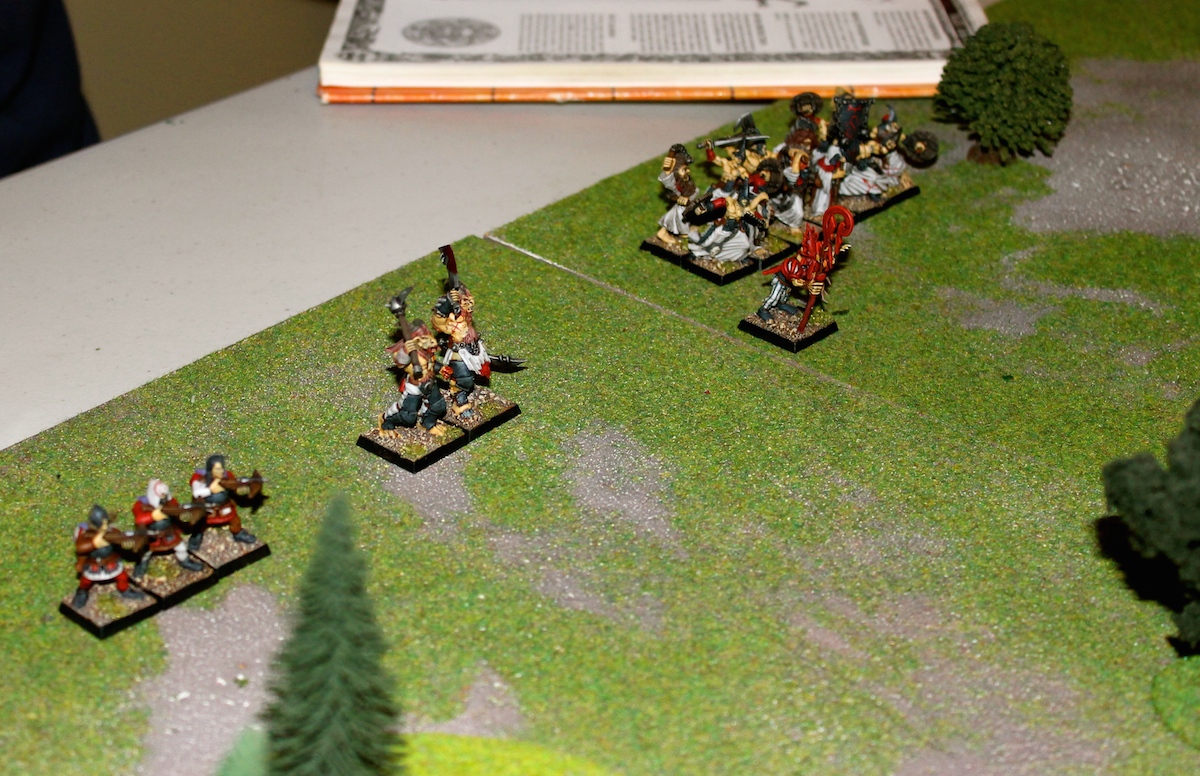 But prior to the battle, a few things had to be determined. For the most knowledgeable of you this will come as a given but for those a little less used to it, I think it's worthy to explain things a little. First were the chaos weapons our characters hold :

I rolled a random weapon (how more Chaotic than that can it get ?) with the following powers (determined randomly every tun) ;
1) Mighty strike, the perfect power to get for a wizard with a movement of 3...
2) Protection, why not...
3) Mighty Strike see above
4) Might Oh cool, that's even better
5) Shrieking, pretty cool actualy
6) Spell (Mental Duel) could have been cool if the other player had a wizard...

Last thing to determine was my spells... as a Slaanesh level 15 sorceror, I could get 1 spell of level 1 and one of level 2. I took the 2 Slaanesh spells for simplicity's sake.

Check this out, even if you aren't a Warhamer Battle player you can see what it's all about : 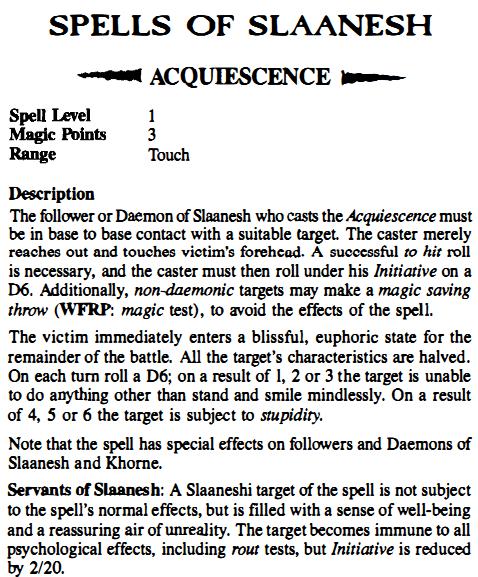 Pretty nasty but I would need to get into contact with a wizard afflicted with a movement of 3... 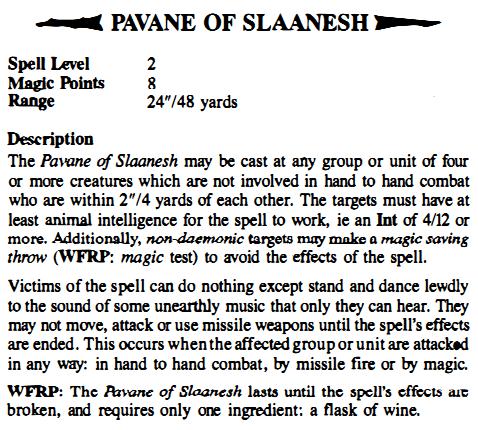 Oh now we're getting serious, a spell that takes more than half of my wizard's magic points in one go but some serious potential... People in need of fairness and equality, you can move to some other place...


Time to get into the real part of the stuff now ... I tried to take an imposing pose just to make sure my opponent would know who I am... 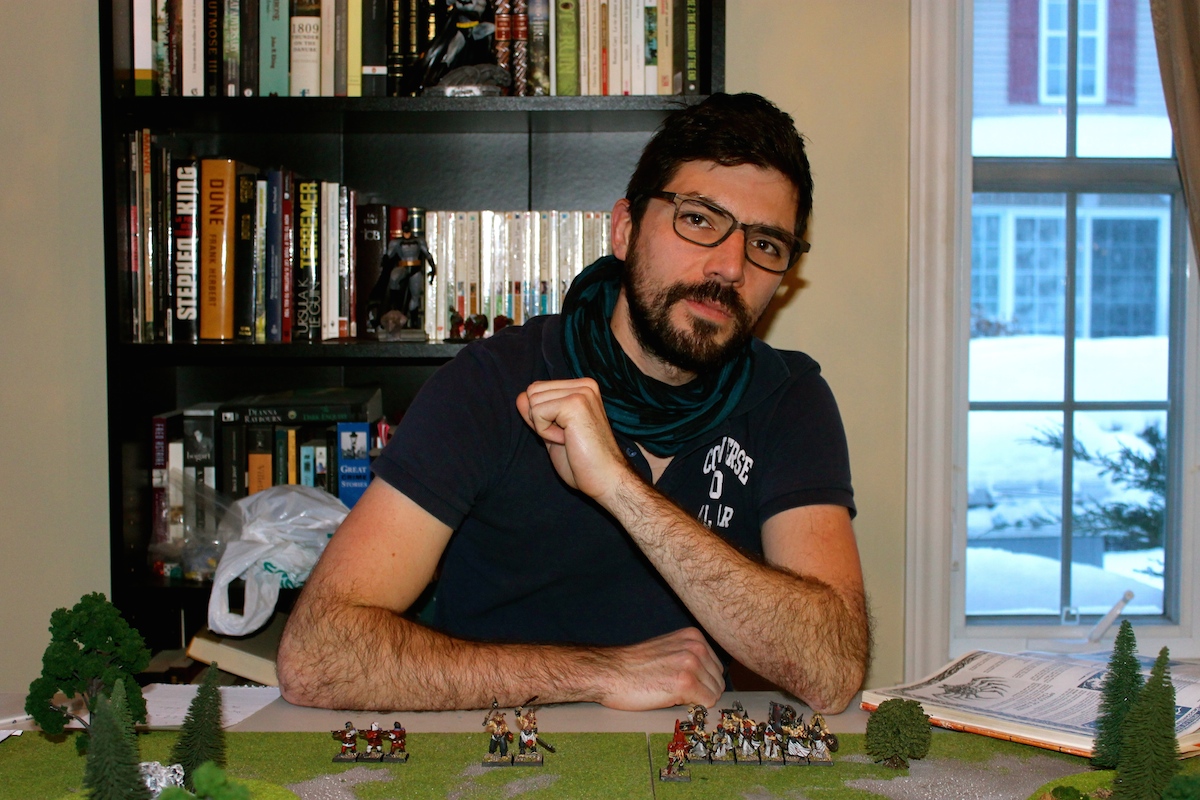 But it seemed he had the very same idea, this one would be a tough one... 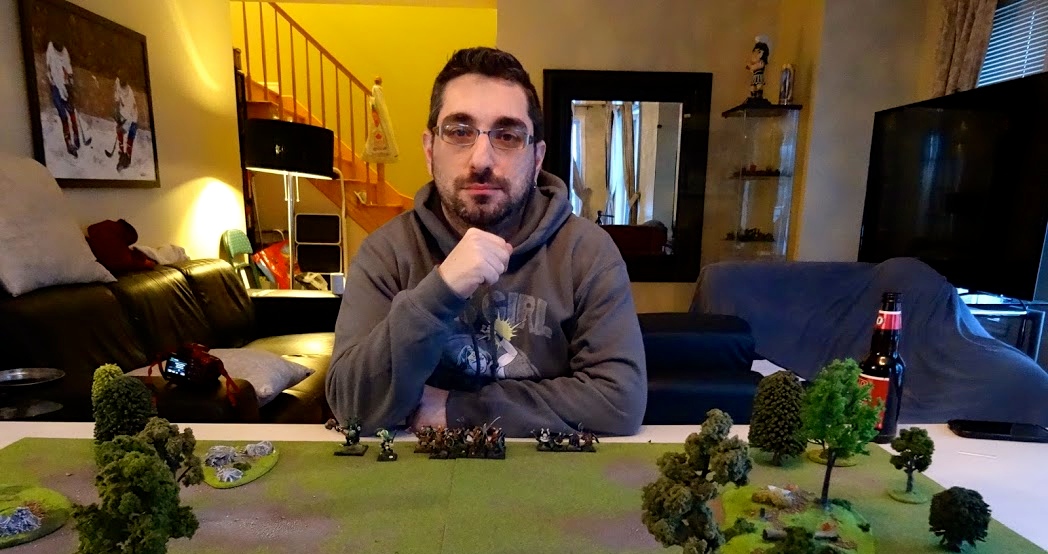 After a quick prayer to Saint Bryan and Saint Donald, the battle was set, the gods were just waiting to throw some dice...


Who woud get the favour of the god ? 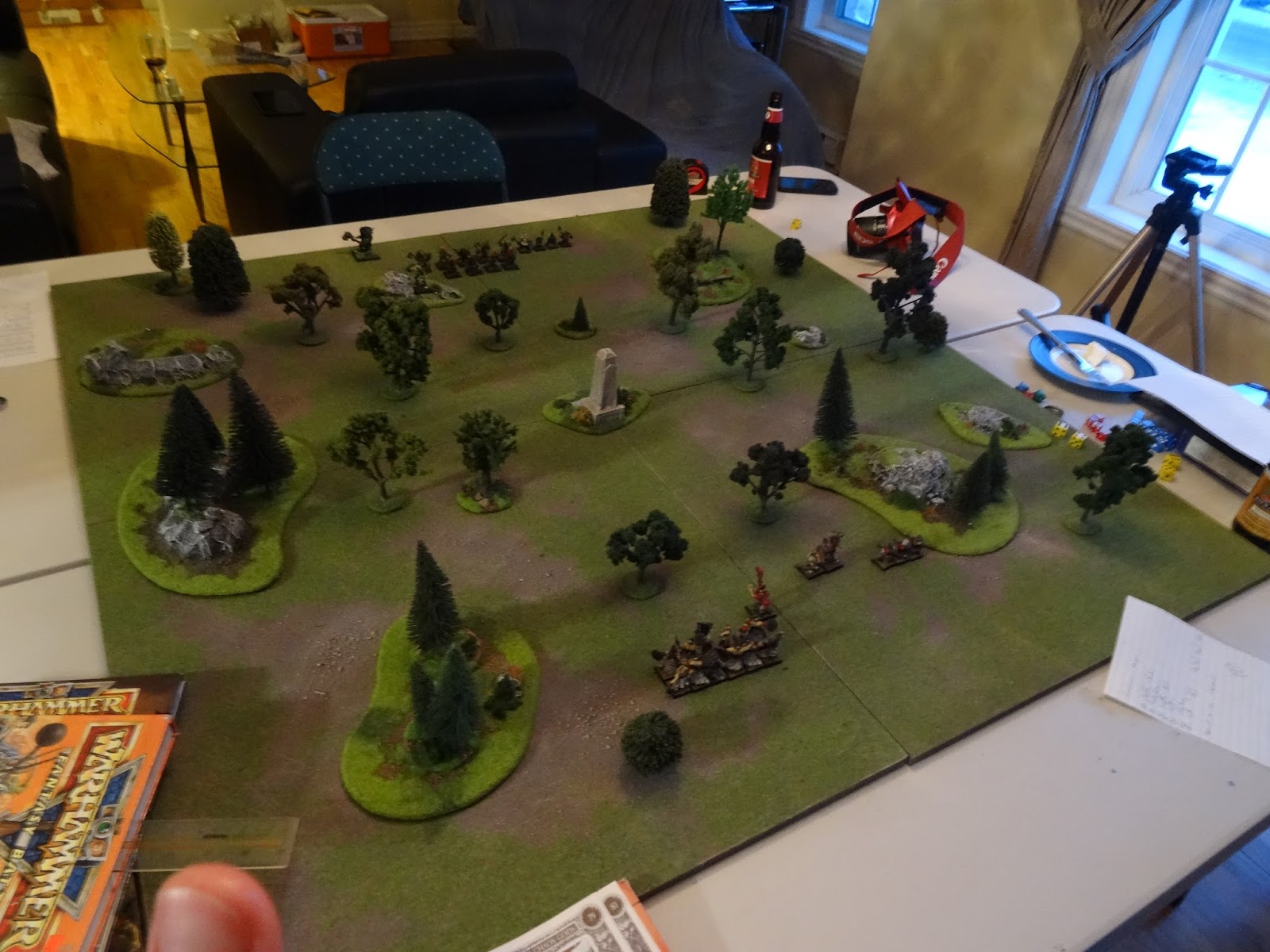 By the end of the 2nd turn, G'borth and C'borth the 2 minotaurs were almost at the targeted monolith. Their master had invested them with the most crucial of missions and he had lured them into a slavish obedience with promises of lustful fantasies decency wont let me describe here... (it involves a gross use of tentacles) 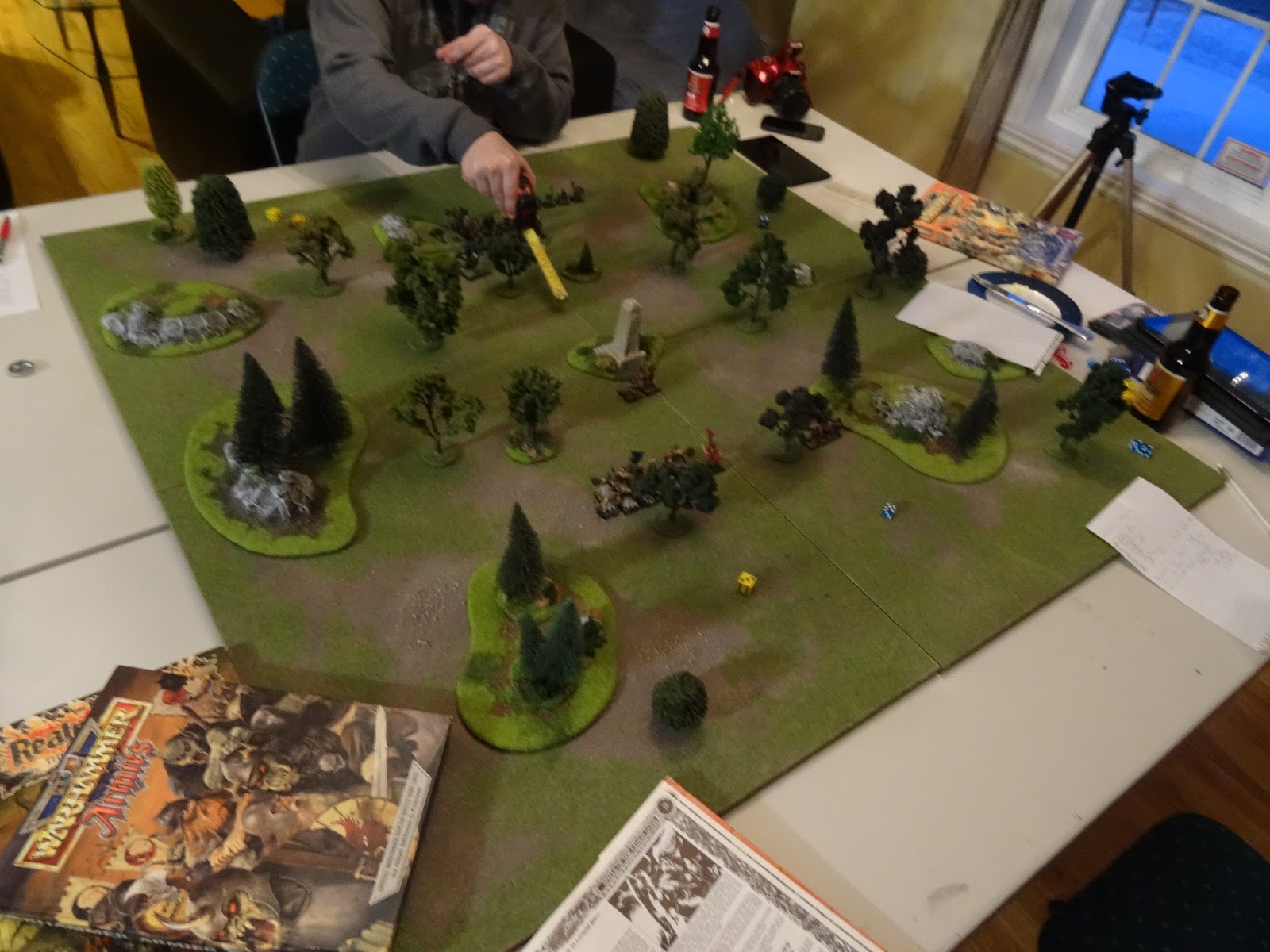 Surprinsingly enough the Nurgle troll behaved as intended by its master, or at least it's safe to assume the plan built buy the Nurgle champion coincided with the troll's plan at that very moment... 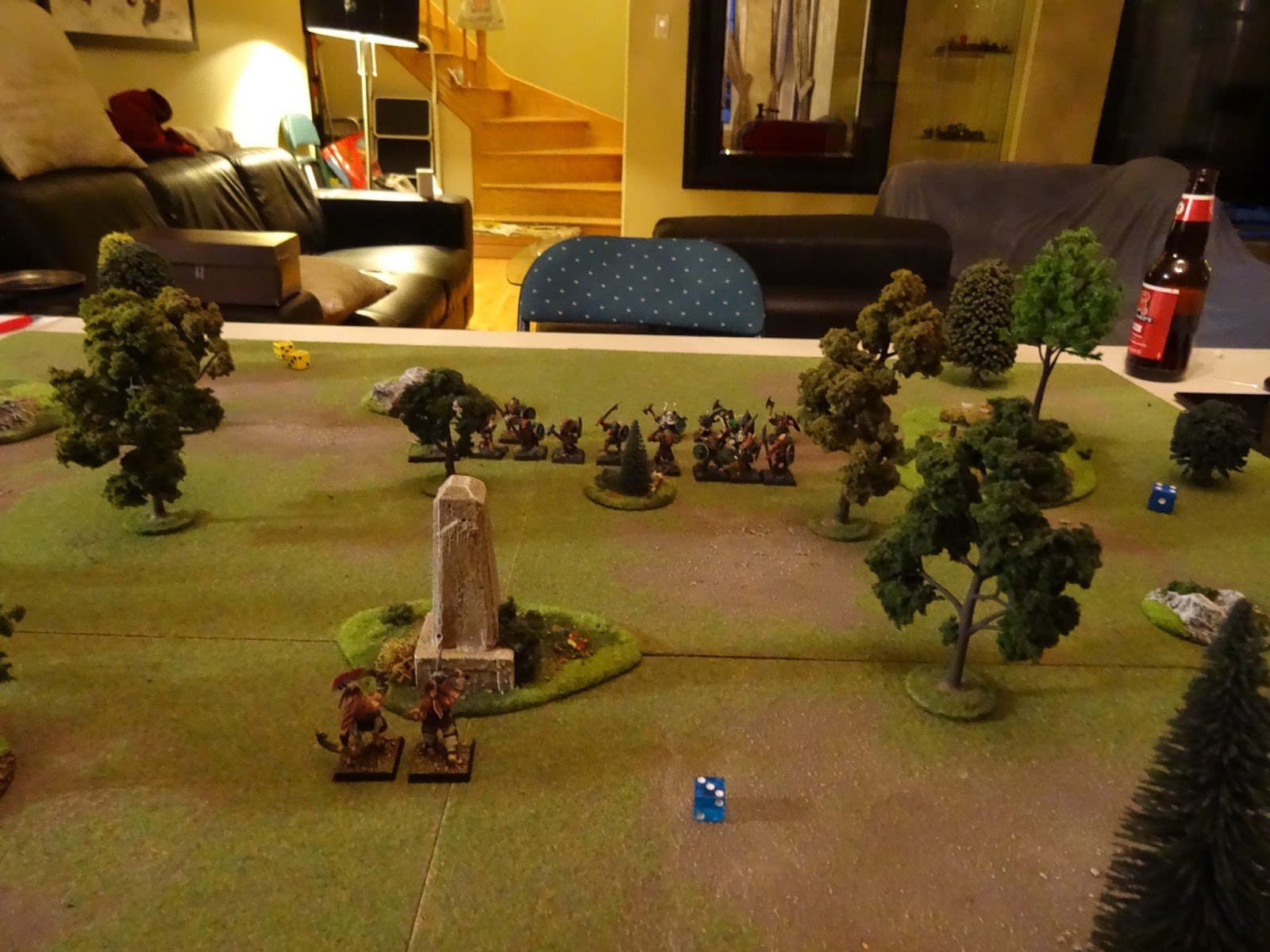 The black hand of Blangis (his personal dark elf sex slaves equipped with crossbows) reached a good spot and started taking their toll in the Nurglish ranks. The Nurgle Champion was the first to suffer from the deadly precision of their shots and he got away with a good wound leaving a broken ego and a nice scar...
The 2 minotaurs didn't manage to come up with a satisfying plan to open the monolith to retrieve the artifact. (C'borth wanted to lift the stone to throw it on one side and G'borth came up with this totally different plan to lift the stone to toss on the other side).

The nurgle champion decided to hide amongst his flock to check if they were OK (totally not o hide from any other shot). The troll though was deeply harmed by the situation and it took him a good while (that's a turn in gaming terms) to decide what would be the most appropriate of reactions until he forgot all about it. 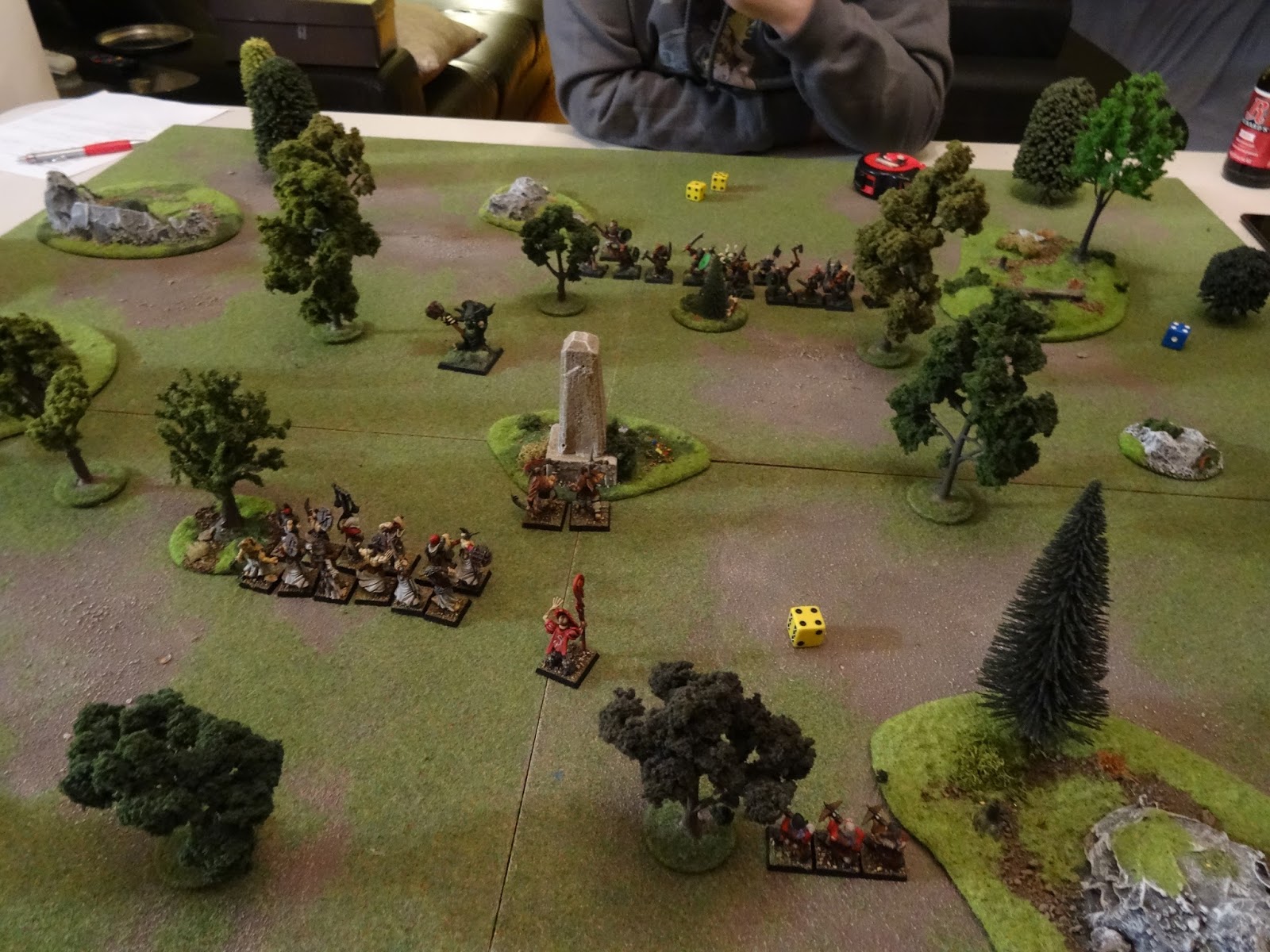 At that point the Duke did a little thinking because, see, having short legs leaves you plenty of time to think of a battle plan  before engaging anyone. With the troll approaching and this formidable unit of beastmen in the distance, things didn't look nice from his angle with only lazy cultists and a 3 dark elves to oppose. Spending more than half of his magic might, the duke invoked the power of the Slaanesh danse...
The Pavane of Slaanesh left the 9 poor beastmen in a dancing transe with some doing robot dances, some moonwalking and some voguing in a very fashionable manner. The joy and pleasure of the dance was such they forgot all about their task and goals and decided o give their all in the battle of rythm and cool steps.
After a facepalming that even made the Duke a little ashamed of what he had done, the Nurgle champion got out of his men to do the job. 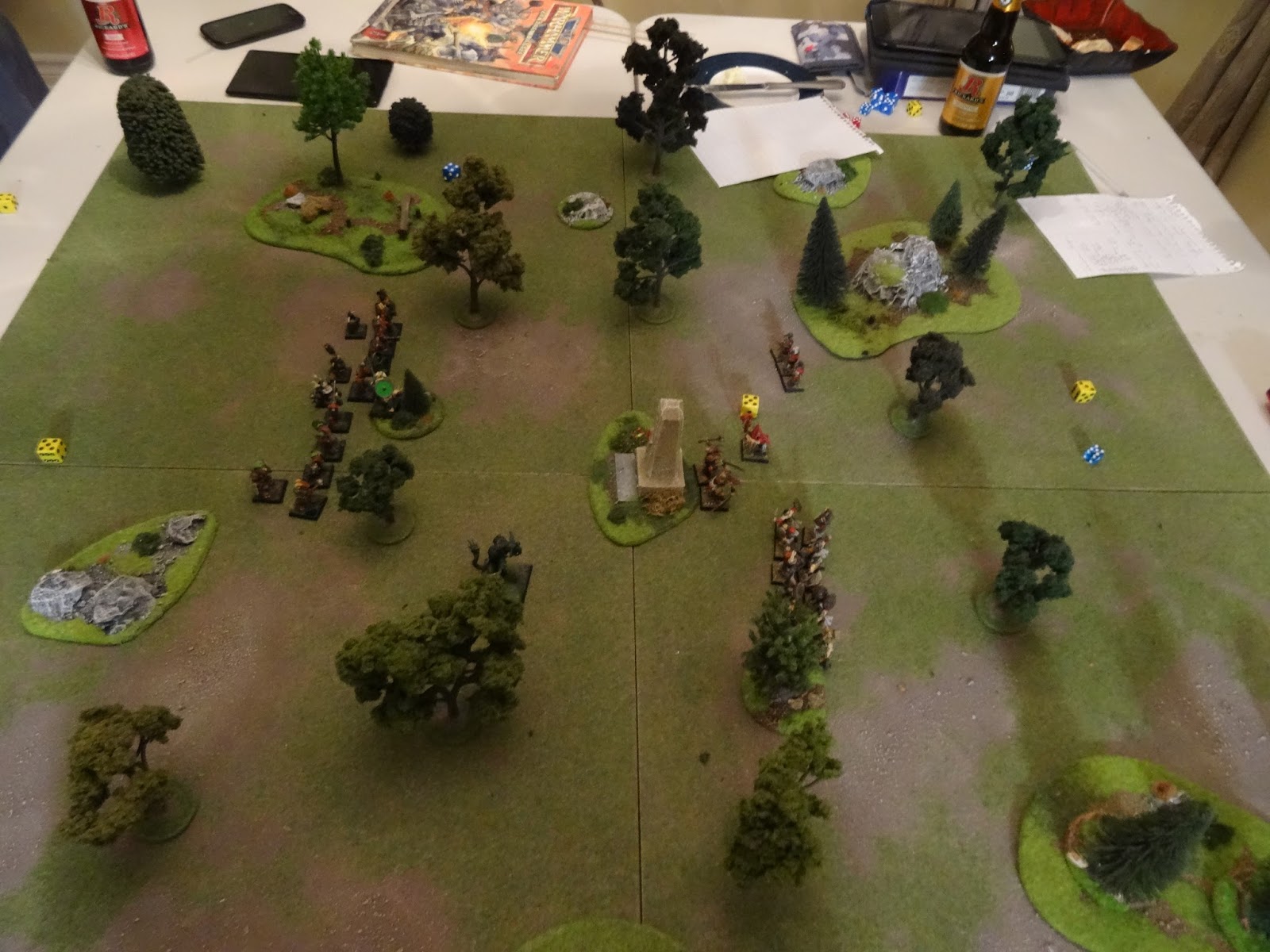 With the beastmen engaging K-Pop choregraphies, the dark elves had little option left but to move forward to get more targets (those chaos dwarves had ridiculously hidden themselves in the nearby woods and were nowhere to be seen .
That's when the troll saw a buttefly and lost his focus...
The Duke stayed behind his men to exhort them to hurry up, the 2 minotaurs still failed to remove the stone (for the 3rd time now) and started arguing...


The cultists finally got to their position to defend the monolith just as the troll was arriving... Some whispers could be heard in the group, some people worrying a bit, some other trying to comfort themselves by saying the master had "a plan" some others waiting for the pleasure to get bruises and physical punishment... 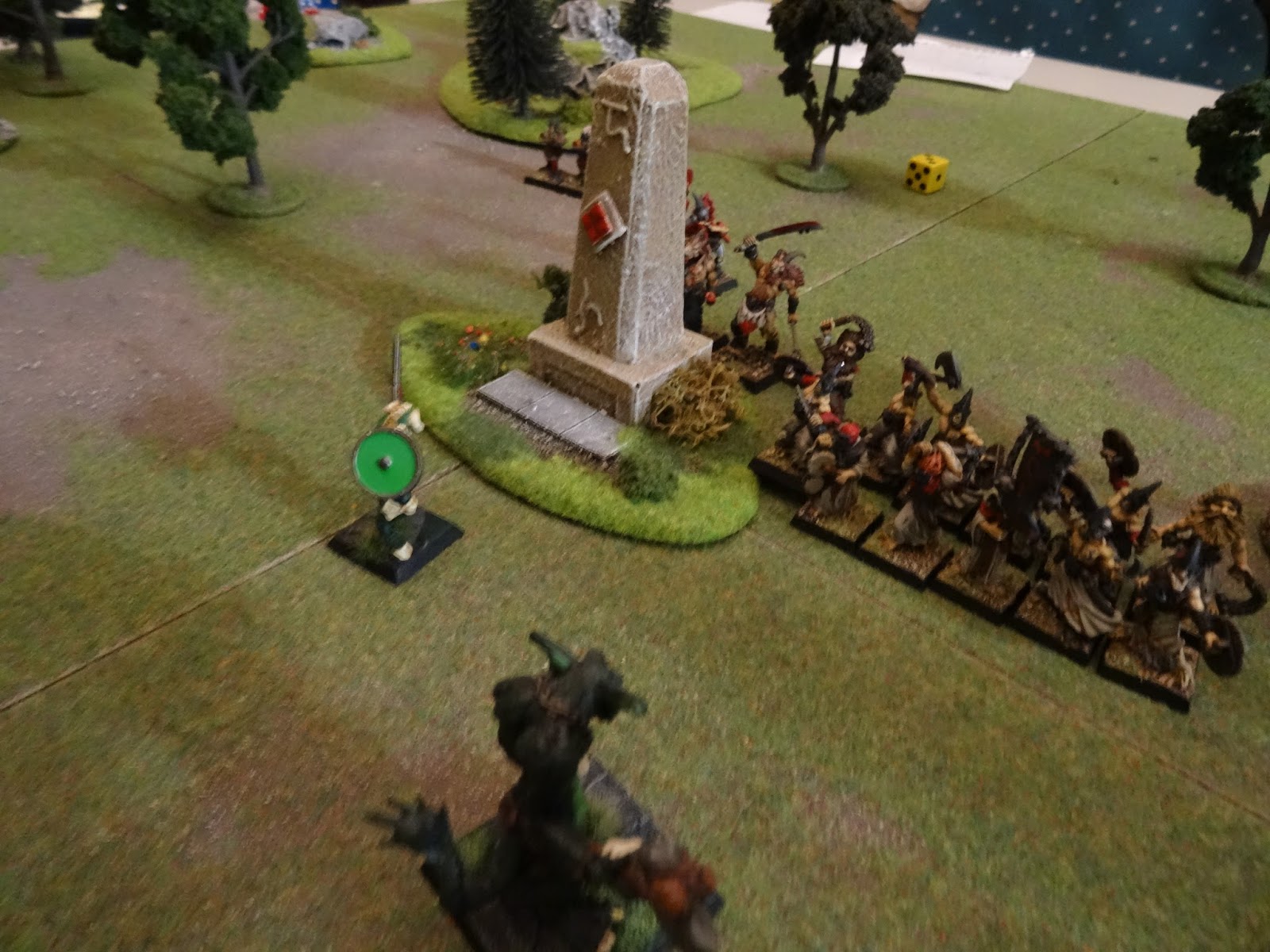 The monolith was the center of all attentions now... 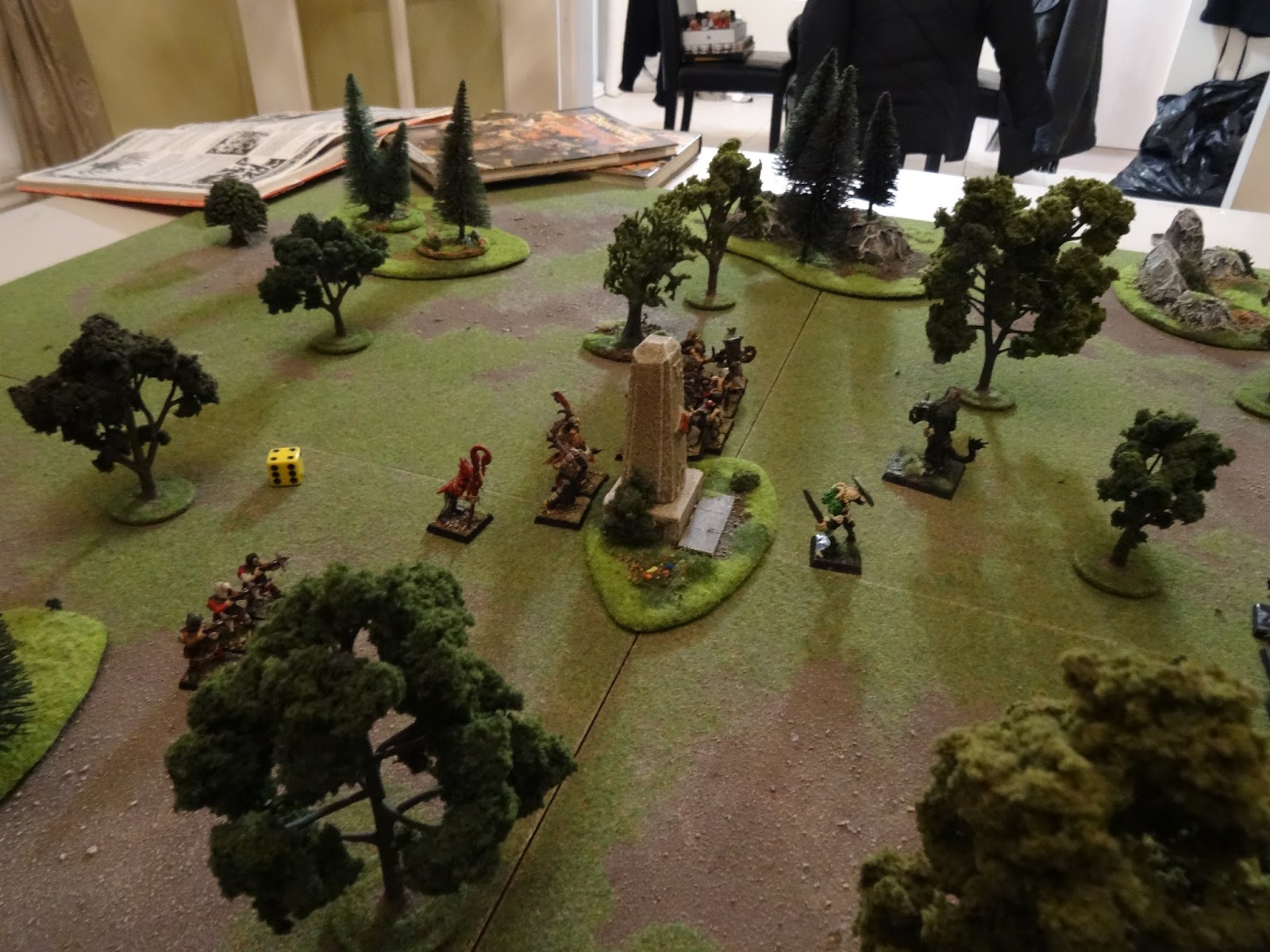 This lead the cultists and the troll into some kind of weird balet of pushing back each other back and forth for some time, echoing somehow the tragic dancing spree of the beastmen in the distance. 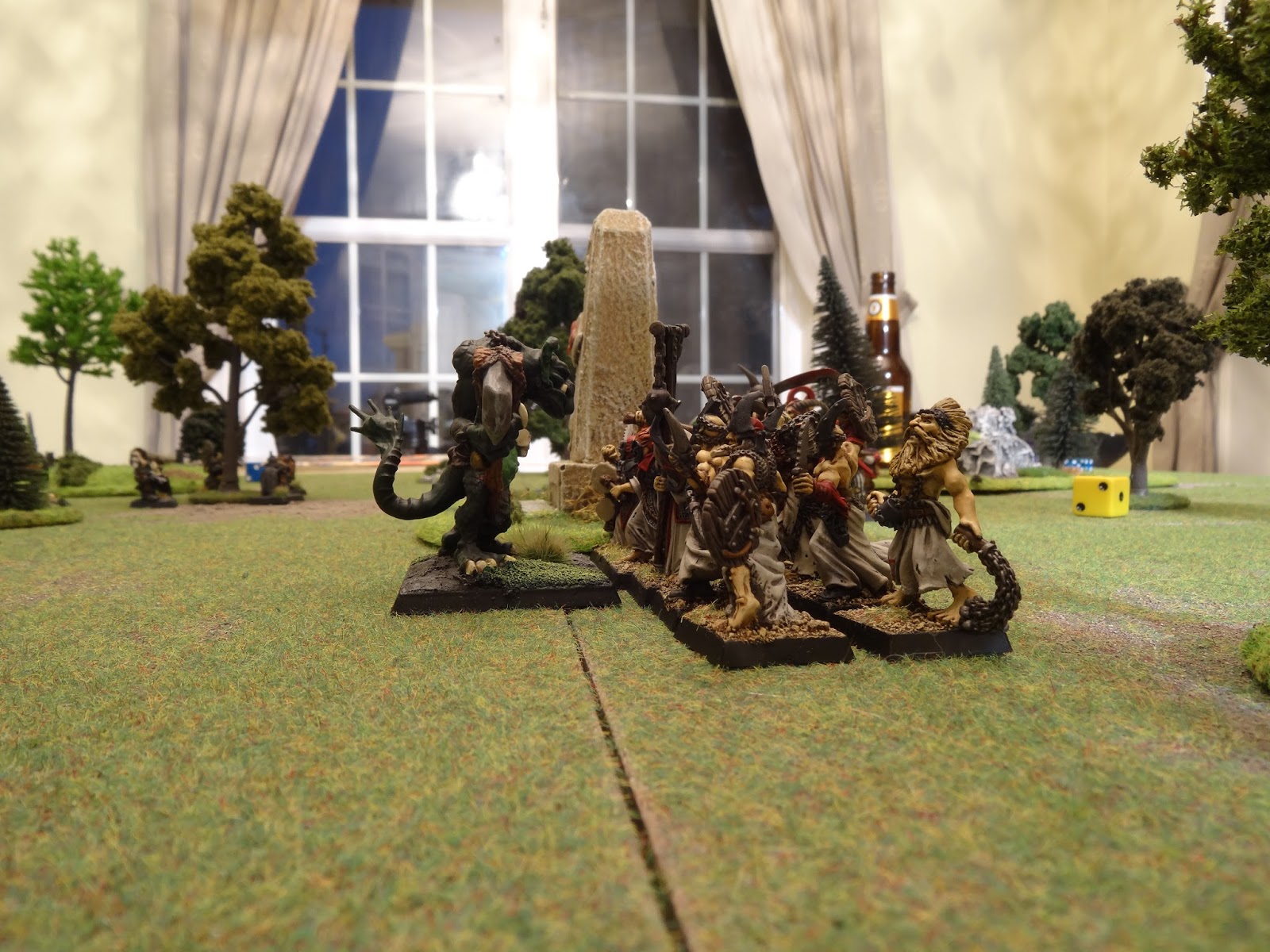 Which got the chaos dwarves to get out of the woods (in the litteral sense though the exquisite scent and good looks of the Slaaneshi migt have somethig to do with it)... just to get shot by the dark elves and their crossbows... 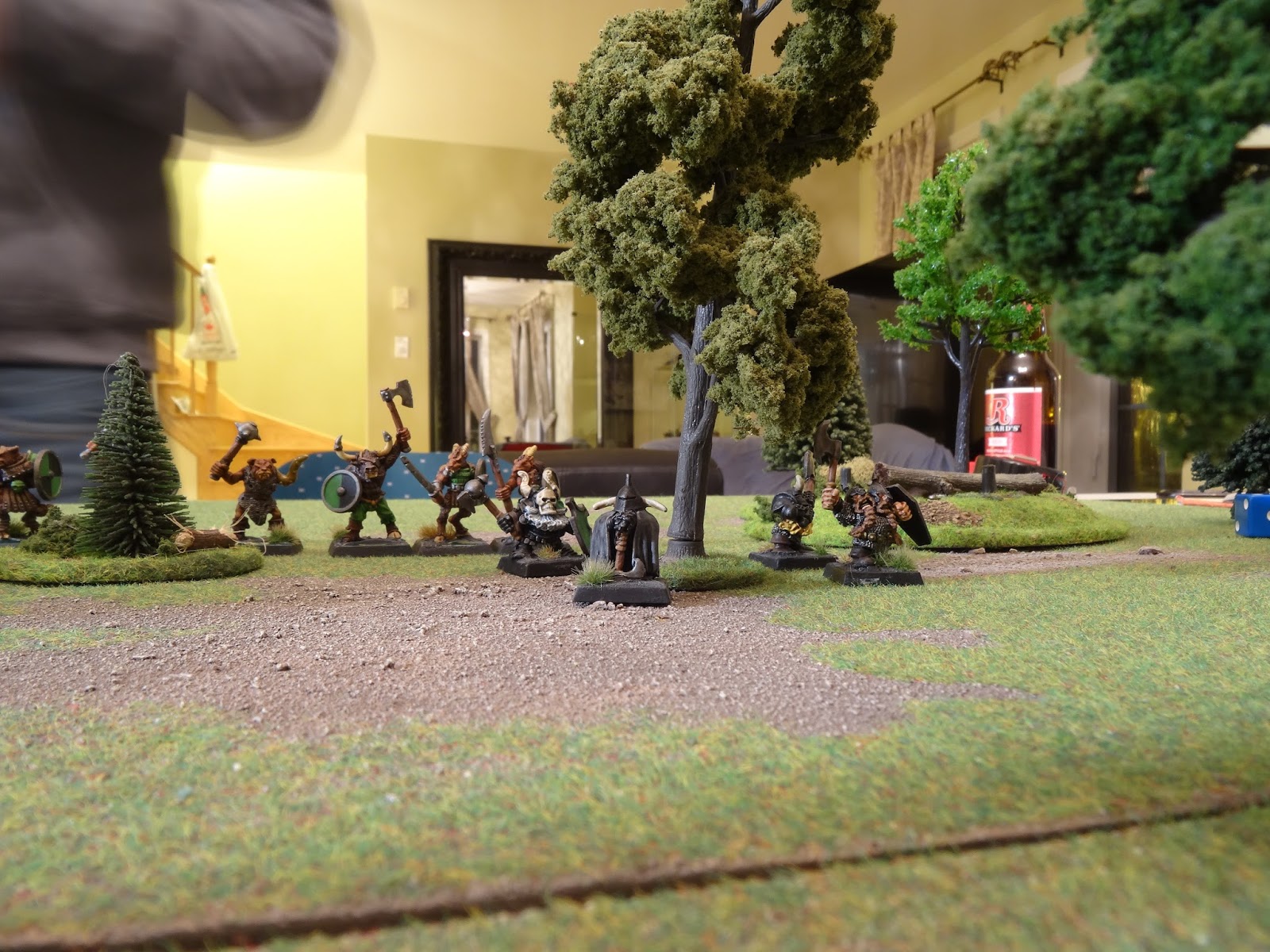 The Nurgle champion decided to get to his opponent for that Battle, the Duke was the head behind all that and he had to kill him himself. After running and jumping to his enemy he finished just a few steps away from his nemesis (that's an inch in gaming terms).The duke blessed Slaanesh for granting his chaos weapon the power of the "mighty strike" for that turn... 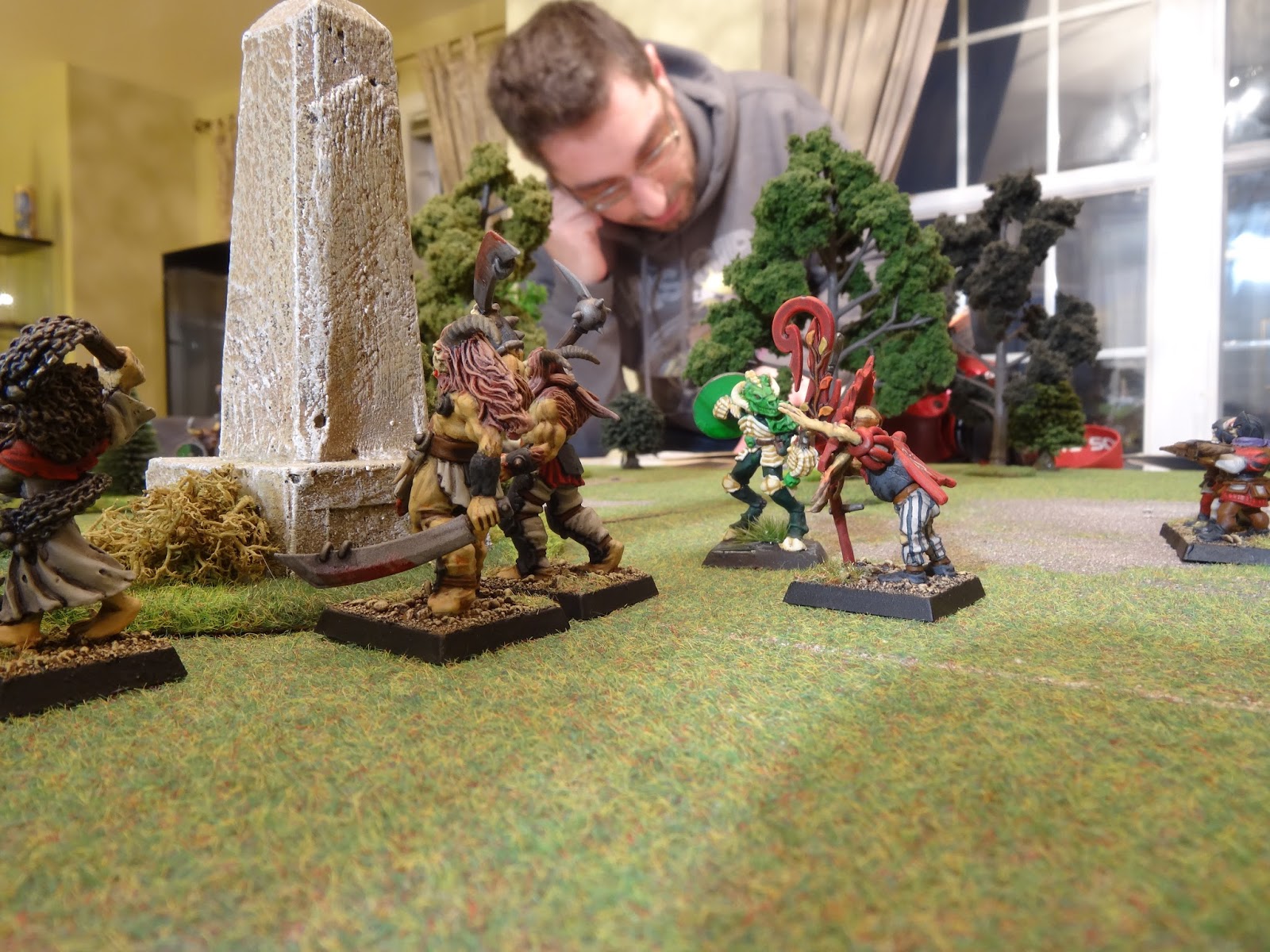 But the black hand didn't let any of the 2 settle this in an honorific way and they shot down the Nurgle champion down as if it was some rabid dog... Proving once again how valuable they were for the Duke.


The cultists were still struggling to take the troll down and it seems he was starting to enjoy that game of pushing them back and letting them push him back in return... until in the distance, the minotaurs finally roared (well G'both kind of mewed) with pleasure, the tomb had been opened at last  ! 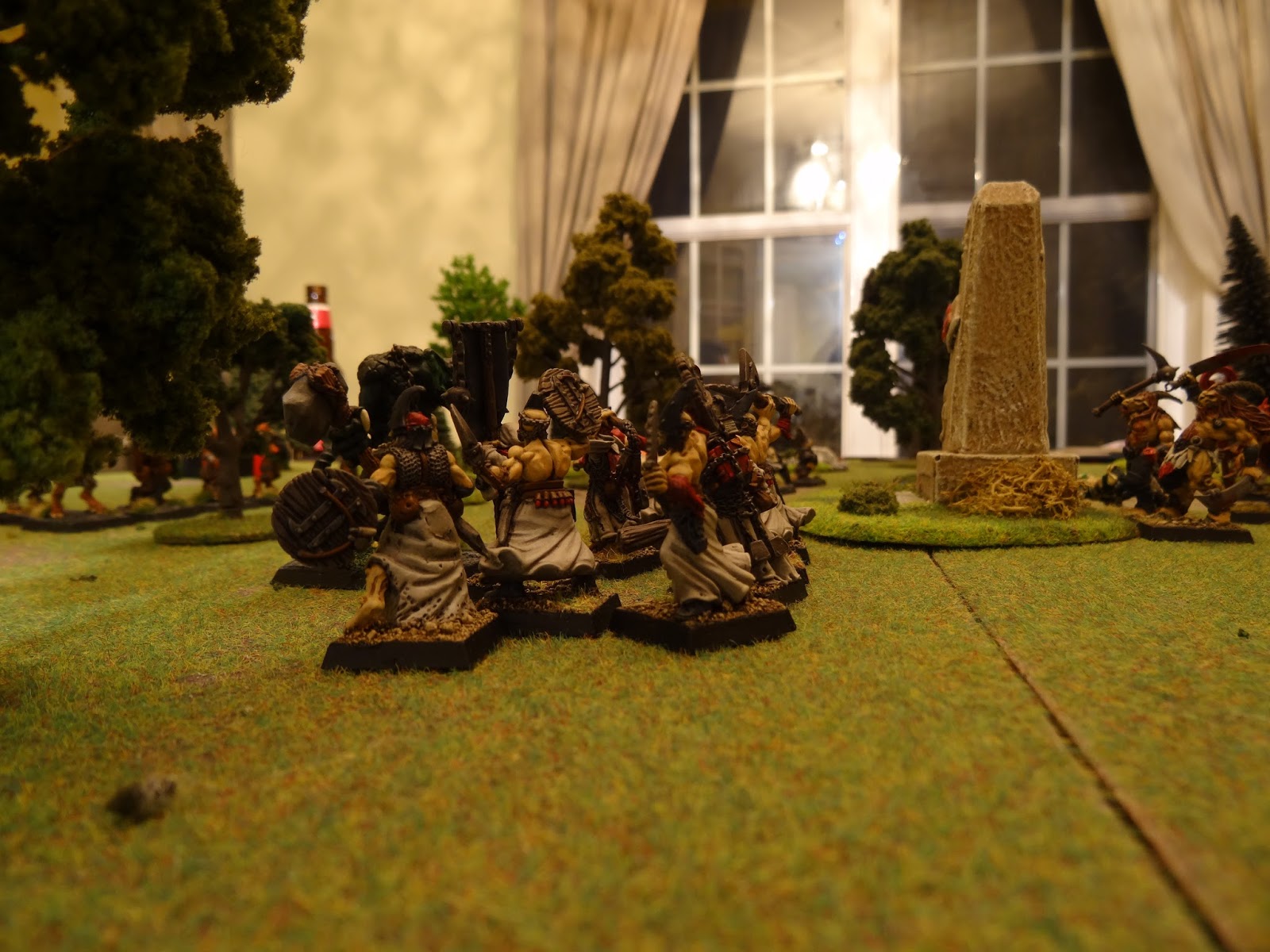 But the dwarves still holded a grudge towards the Slaanesh champion... from a distance. 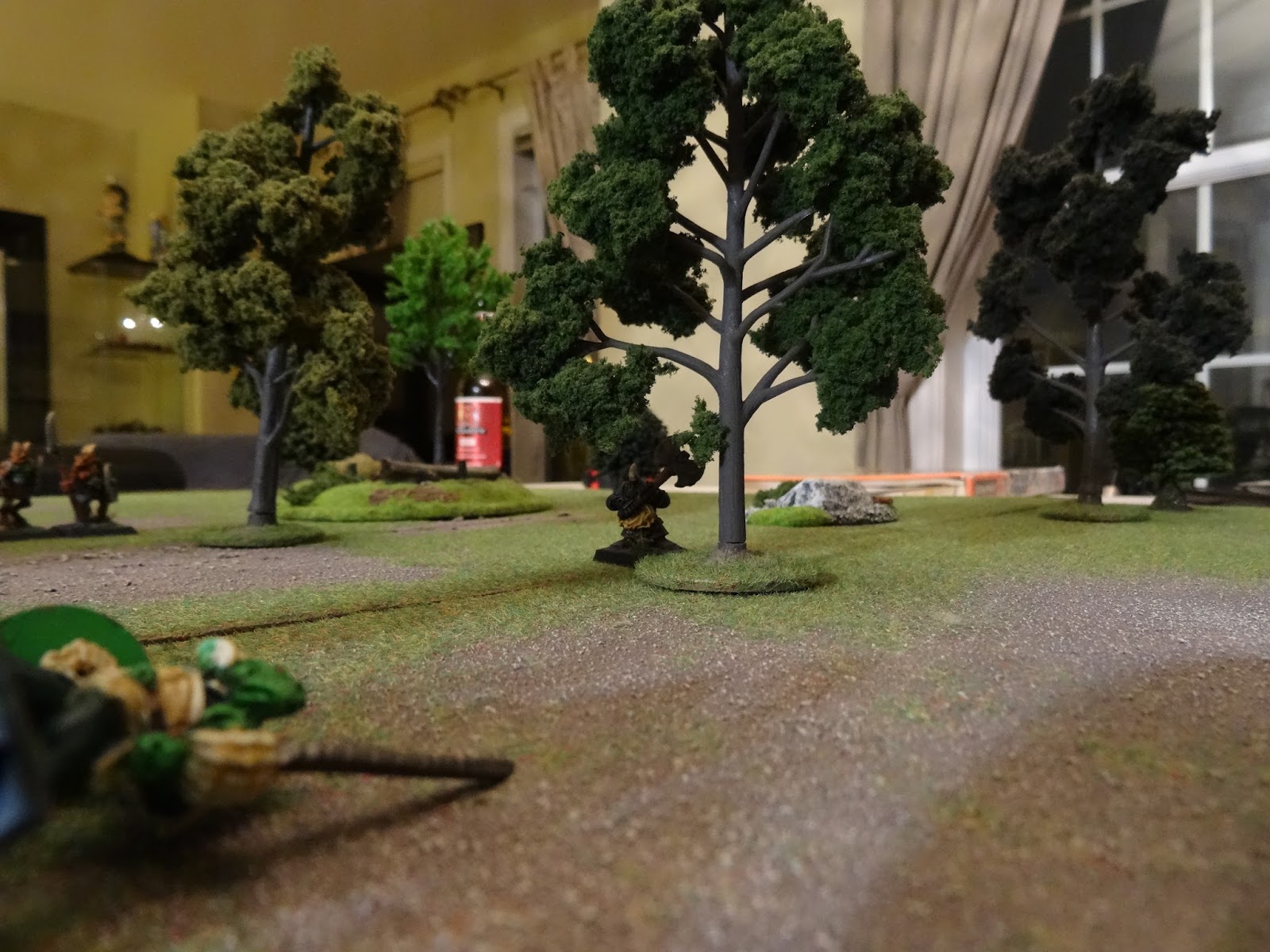 One of them though managed to engage the Duke of Blangis in close combat, escaping the arrows of the dark elves thanks to one of his companions sacrificing himself.
C'borth and G'borth tried to inspect the content of the tomb and it seemed like a daemonic blade was trapped inside it, they got it out without even trying to consider if there could be any trap but they failed to identfy it. The Duke would know, he always did... 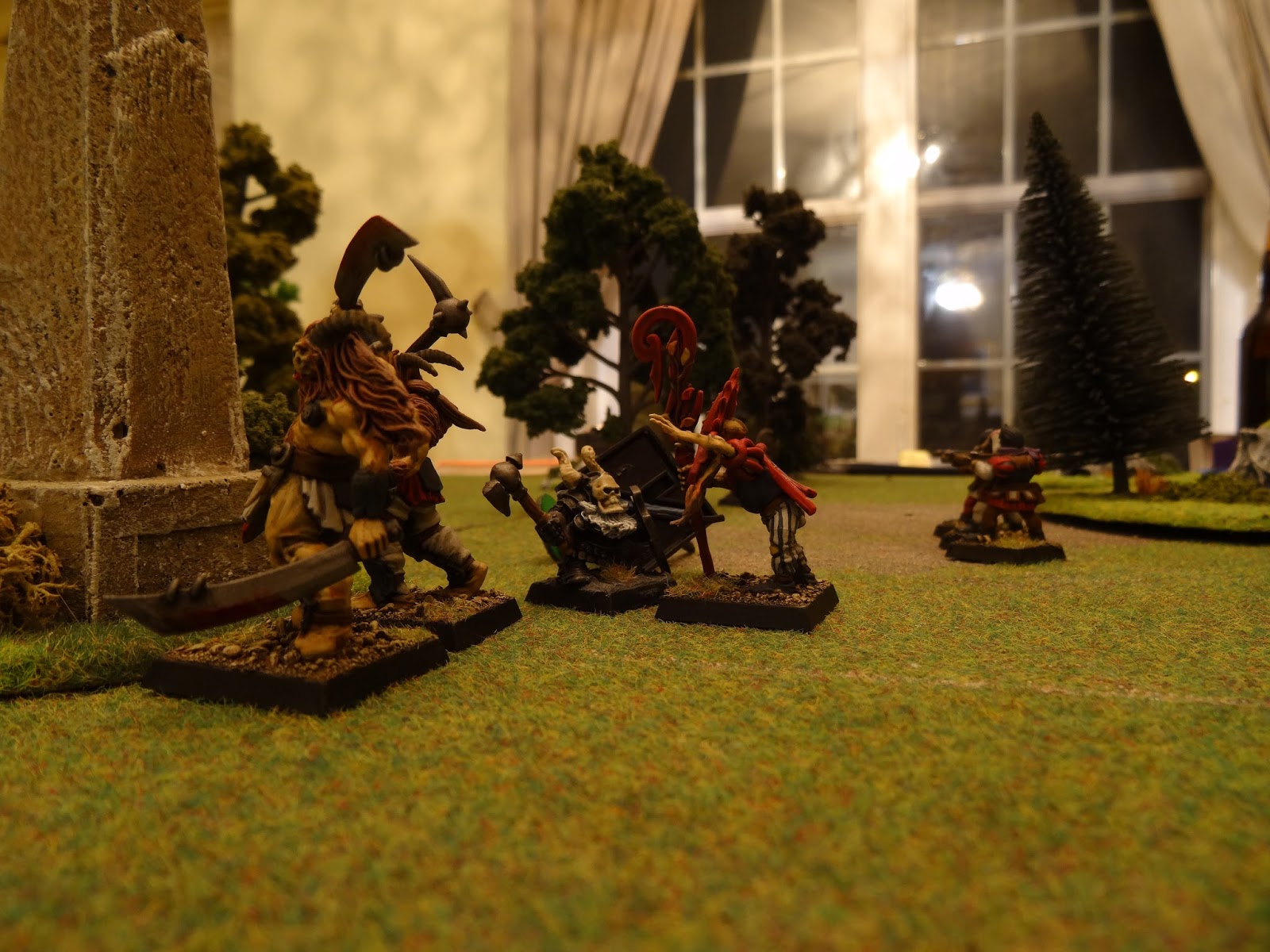 The cultists and the trolls were still exhausting themselves in their endless game with the beastmen cheerleading them with some exotic dances... 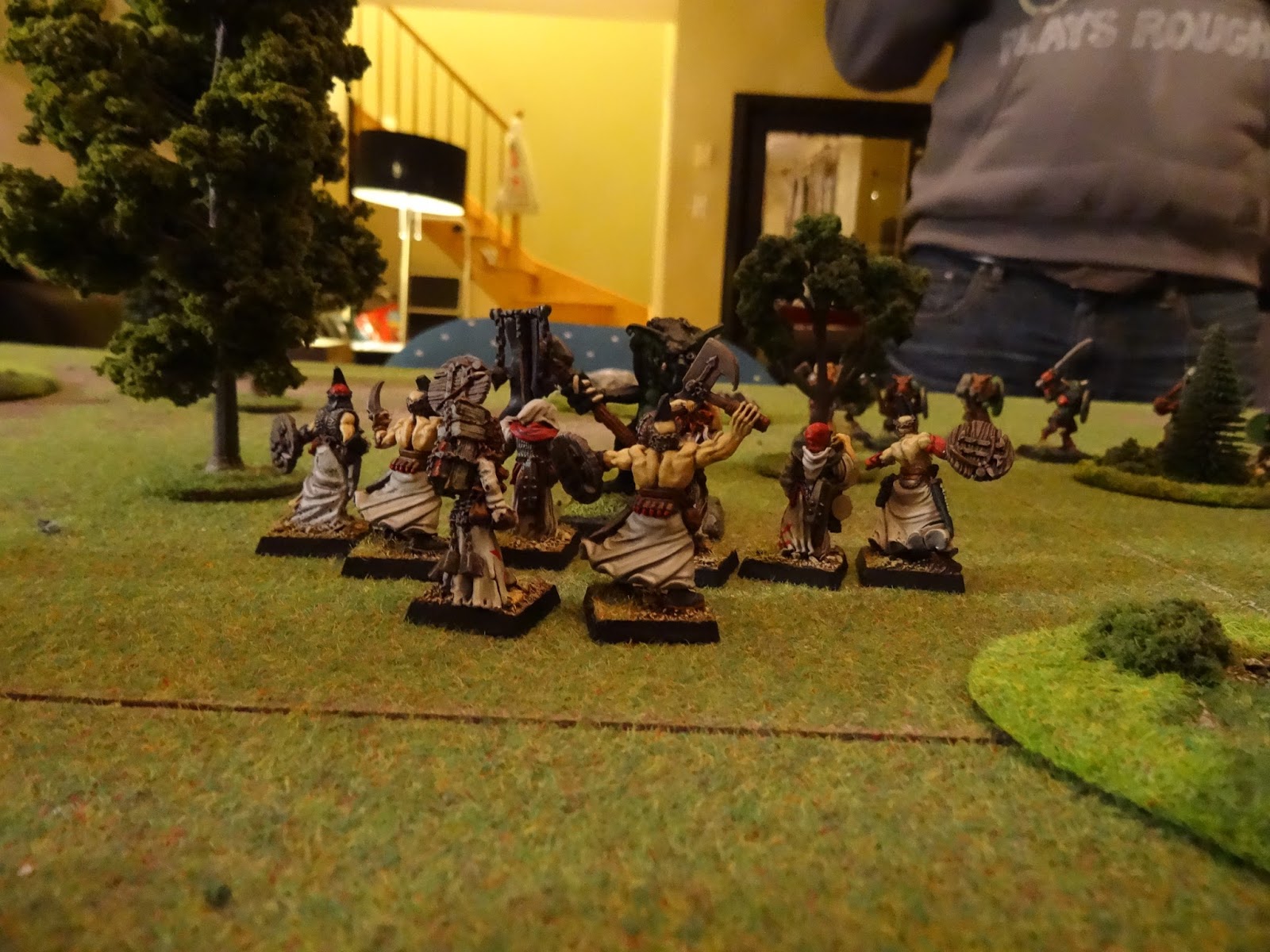 C'borth and G'borth got back to the master just to find him engaged with a ridiculous smelly creature. They never got to exchange blows with him for their master inflicted him a MIGHTY STRIKE that proved fatal...
After a good round of applauses from his crew, the Duke it was time for them to get back home and see what treaures they had earned with blood and sweat (tears would be the reward). 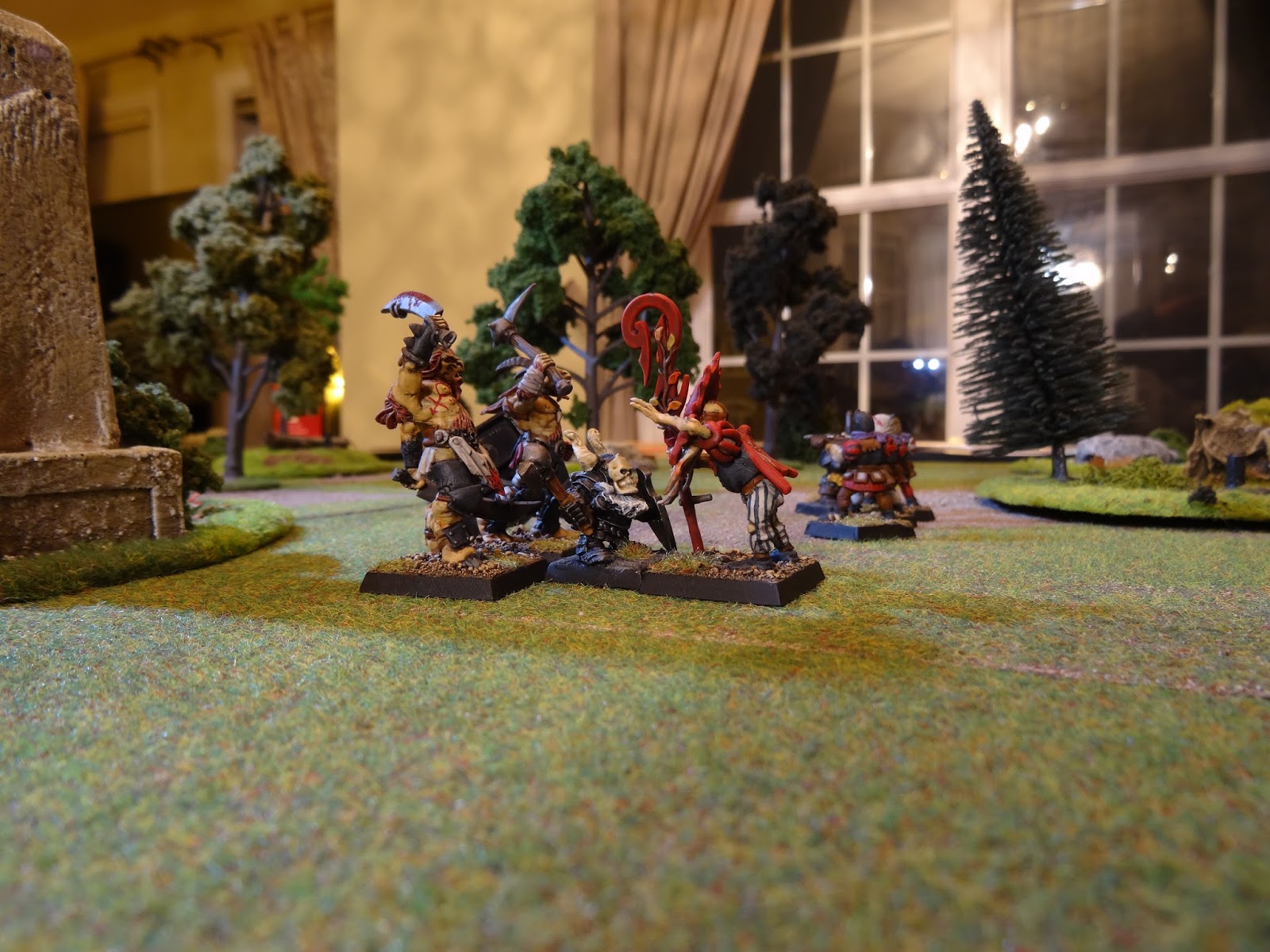 Rest of the band : YEAAAAAHHHH

Duke : Today, we have fought ! Today we have won ! Today Slaanesh the great lord of pleasure has granted us some power as a reward. This sword holds the power of an ancient Daemon prince of renown !

Rest of the band : YEAAAAAHHHH 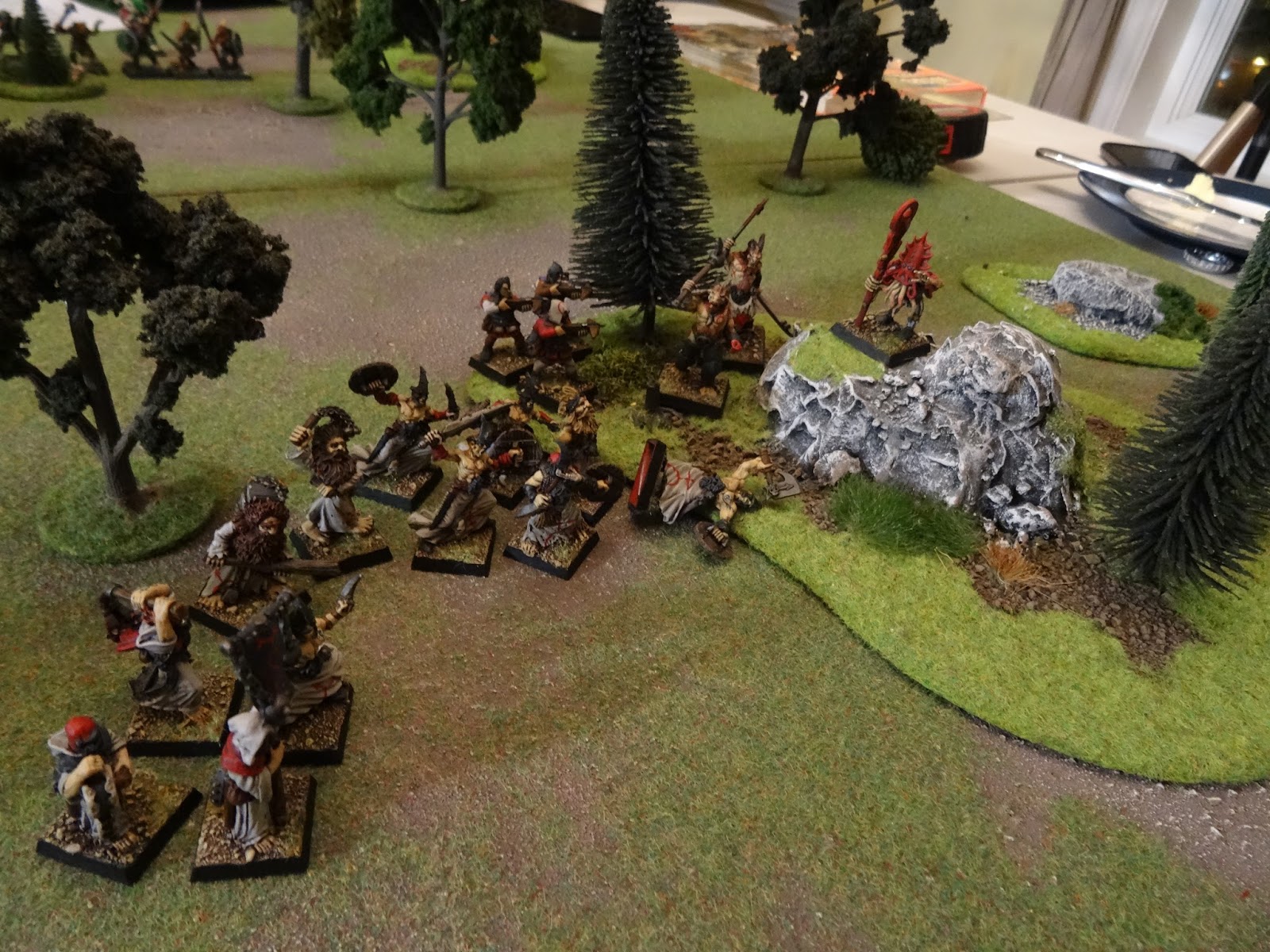 After some rolls, it appeared the daemon prince in the sword is an ancient half-ogre who has received  :


I'm really pleased with him and I seriously consider converting him up at some point...

After the gathering all the casualties it seemed like Slaanesh had been good t is followers with only 2 minor wounds and one dead : Igor
One of the Dark elves gained a furry mutation while the duke himself saw his face transform into that of a squid (gaining one extra fear point in the process).
The Duke :  Igor was brave and he fought well, trying to get behind that troll may not have been his wisest move but we'll always remember him as a brave... 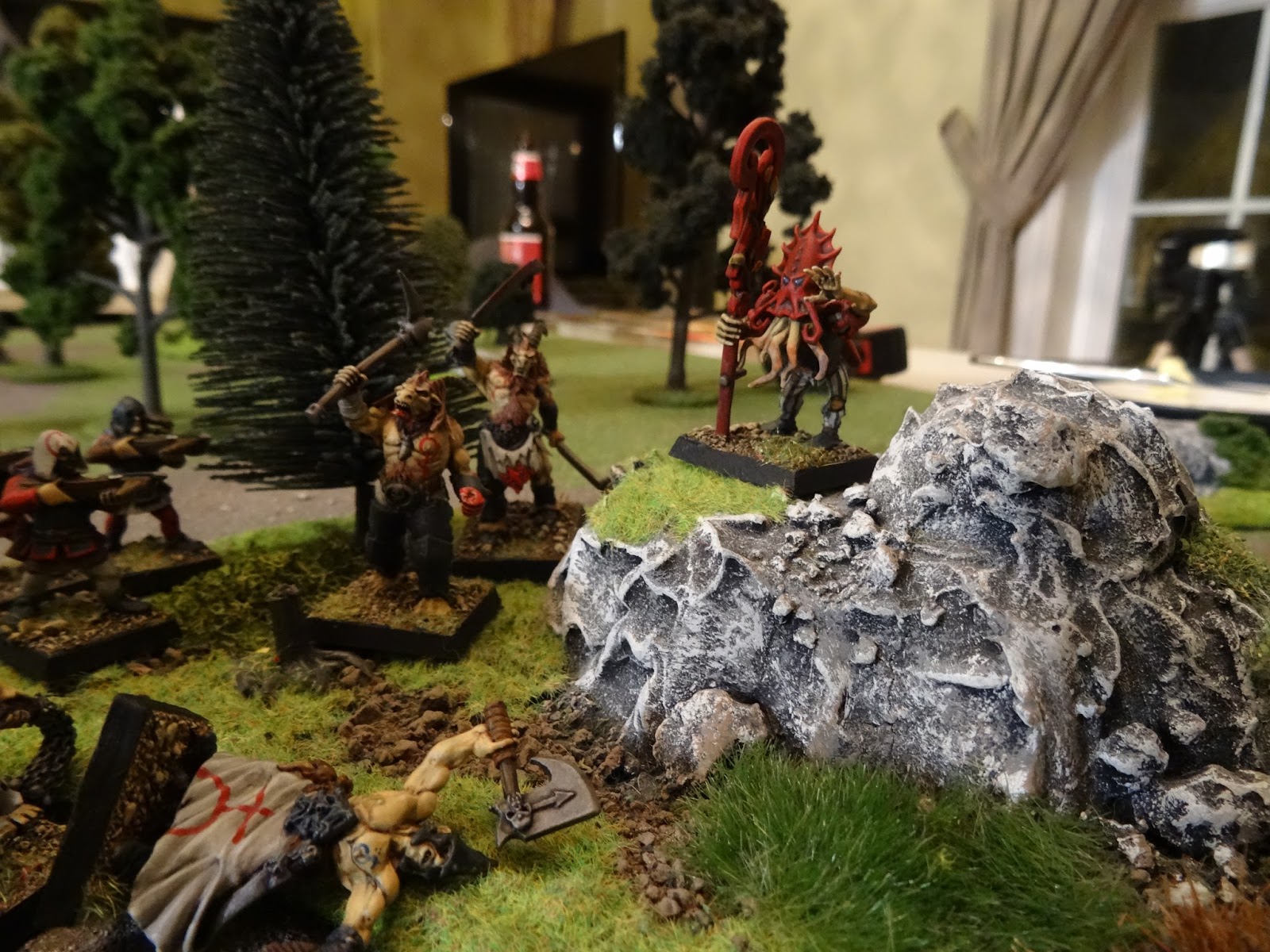 Rest in peace Igor, may you find eternal pleasures in the other world... 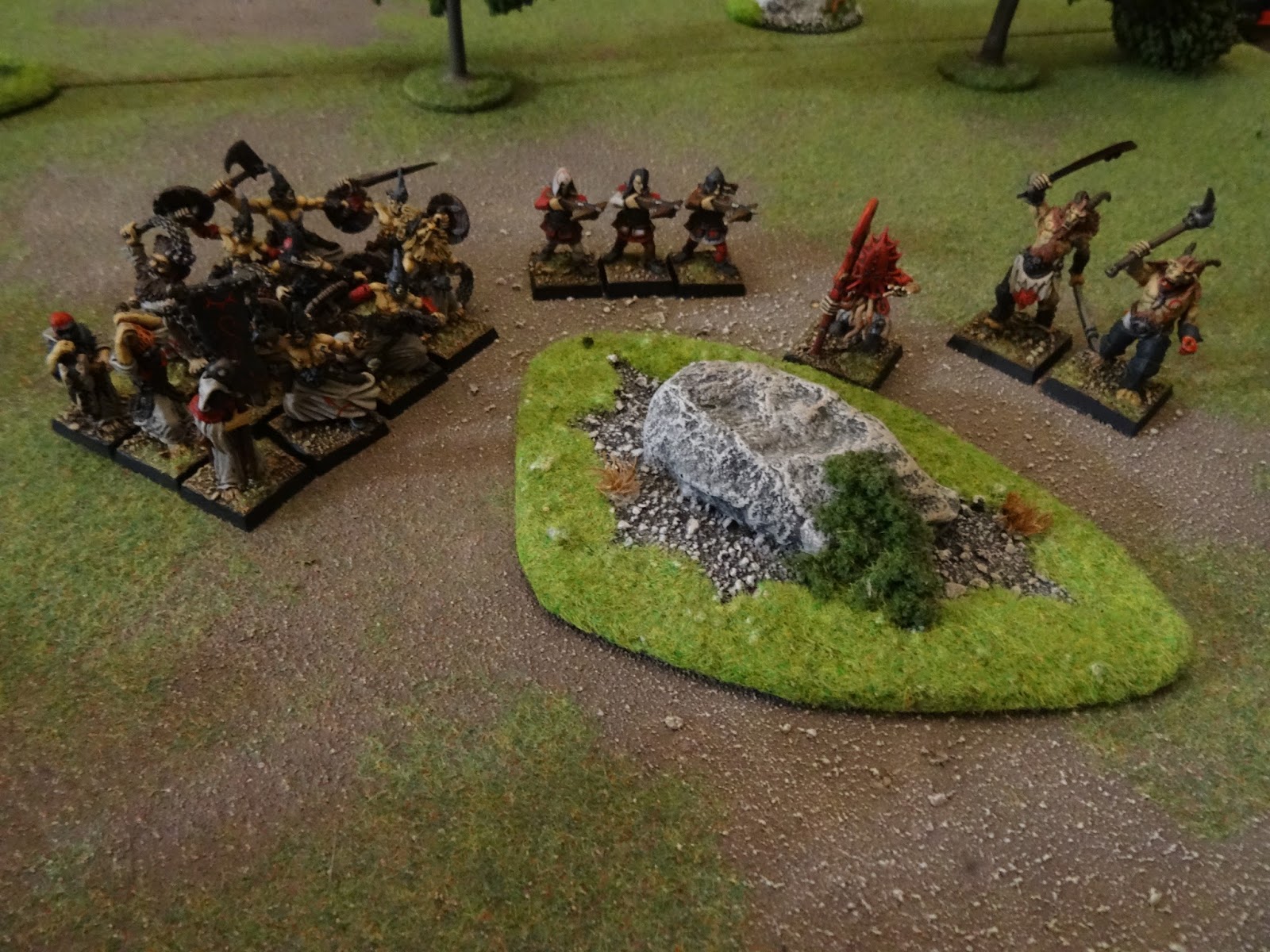 Duke : Wait Mike come back, there will be new friends...maybe, look ! Elrath (on of the Dak elves) even got gained a furry loo ! I even gained a bestial face ! that's more fun for everyone !

Mike : Yeah know but it'won't ever be the same you know that... 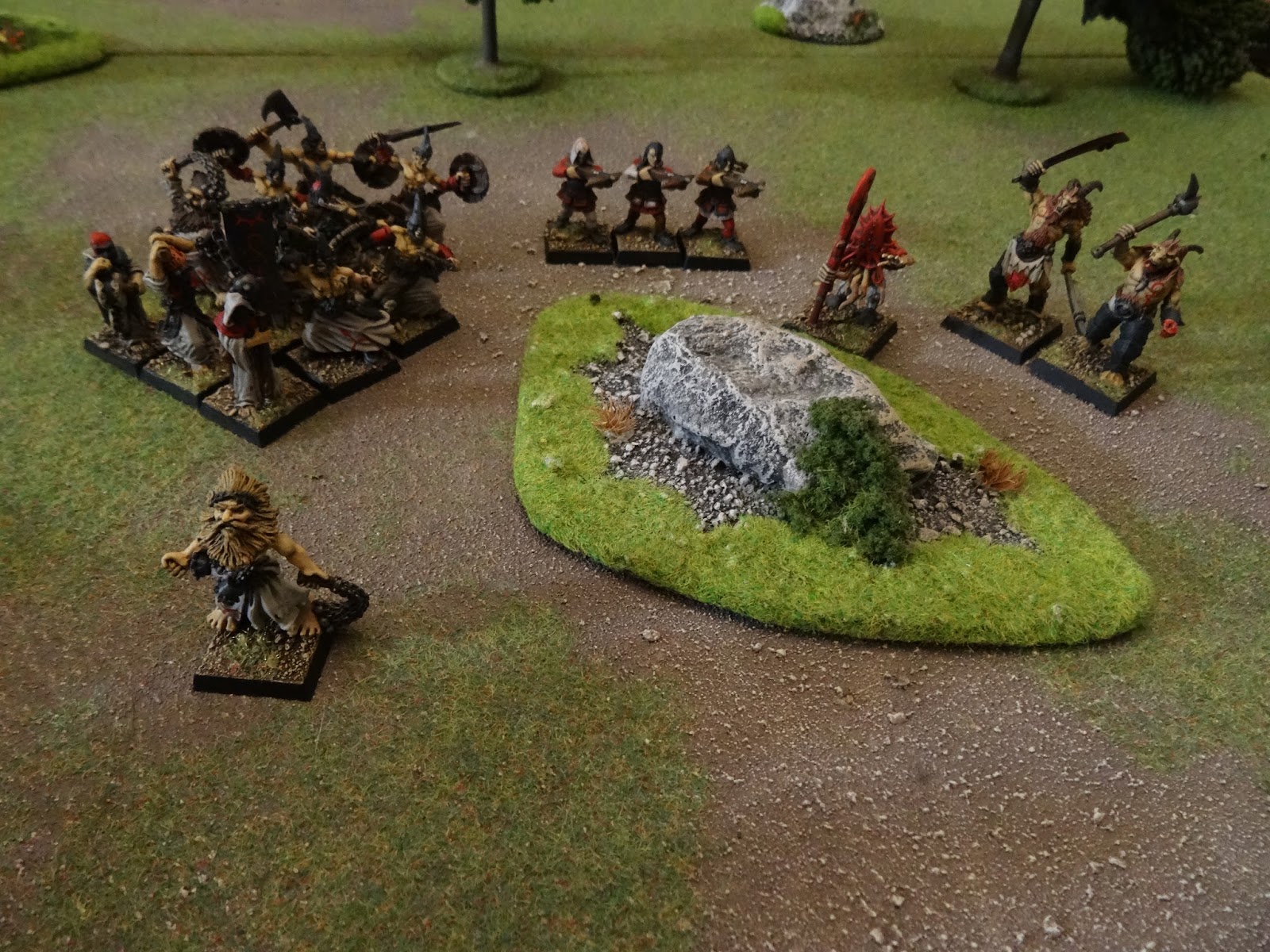 - Well first of all, I had tremendous fun with Iannick who was a perfect host and a really great guy to play with.

- I forgot plenty of things (my +1 to WP and the fact my champion could spit acid).

- The games was really settled when I used the Pavan of Slaanesh which is one extremely silly spell (unless we understood it wrong).

- Getting a game of 3rd after all those years was really nice.

- Getting to roll all the silly extra stuff was good fun (chaos weapons, spells, daemon prince, names and casualties, etc...)

- I really want to play a 2nd round since both champions are sworn enemies now.

- It takes forever to write a battle report...

No big updates from me until some time since I'm going to go a little further in the depths of Québec for some time so see you in a couple of weeks, I hope ths battle report proved a little fun for you !
Publié par Asslessman