Alright, back to some actual painted model with the Rad chimera. What is a rad chimera I hear you say? well it's this : 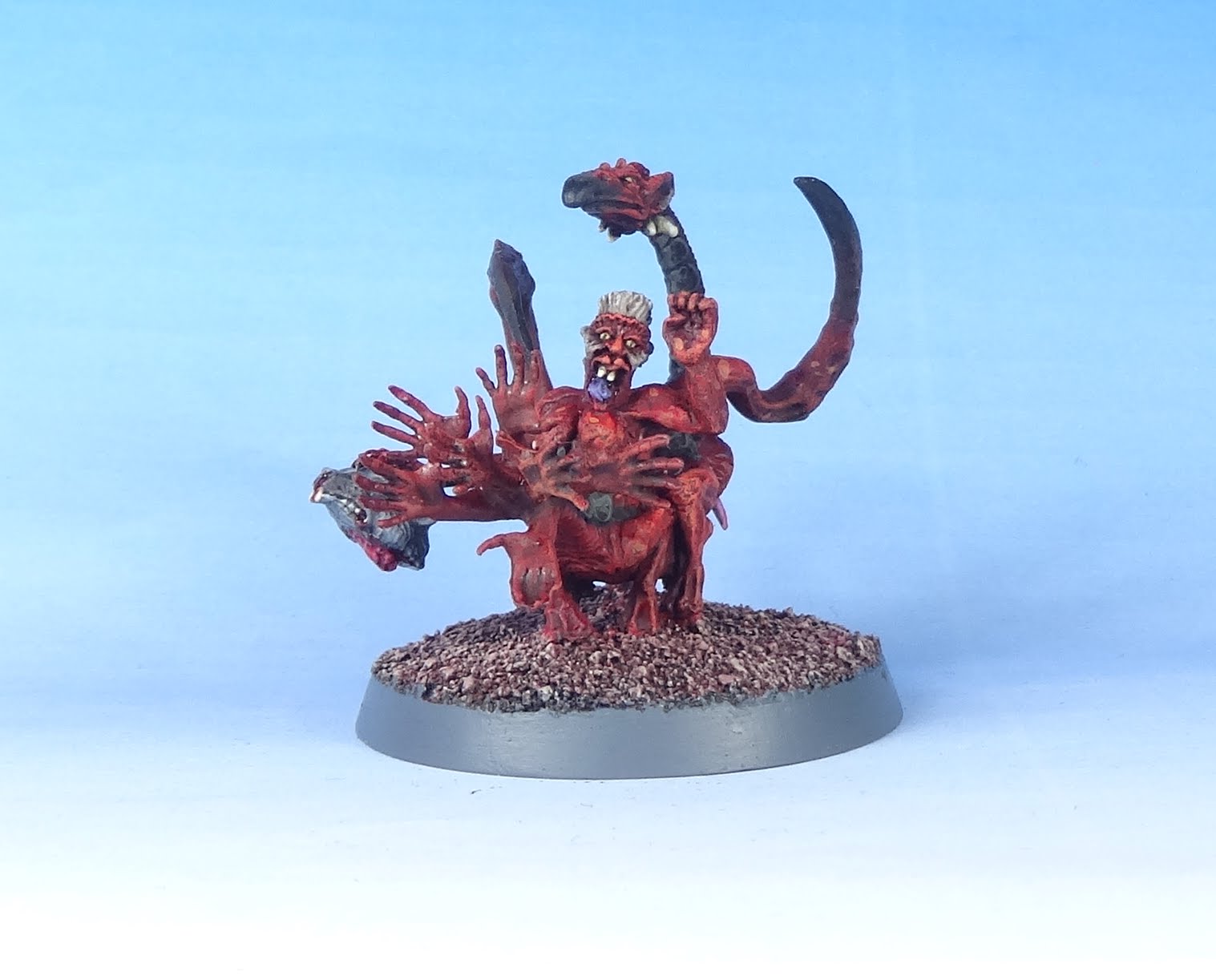 
You may actually remember this one comes from a challenge on the Oldhammer forum called the oldhammer salvation army. The aim of it is simple as it is basically a place where you can dump models you've never taken the time to finish and that will unlikely see a brush unless someone comes to make it in your place.
That was the case for this little mutant and that commissar.

Now this time the deal was a bit different as the model to save could be considered finished but perfectible. The model was proposed once again by the excellent Responsibleone along some even crazier models (that's possible).
In all honesty I really hesitated touching it as it was so full of that retro charm that got me to take it in the first place : 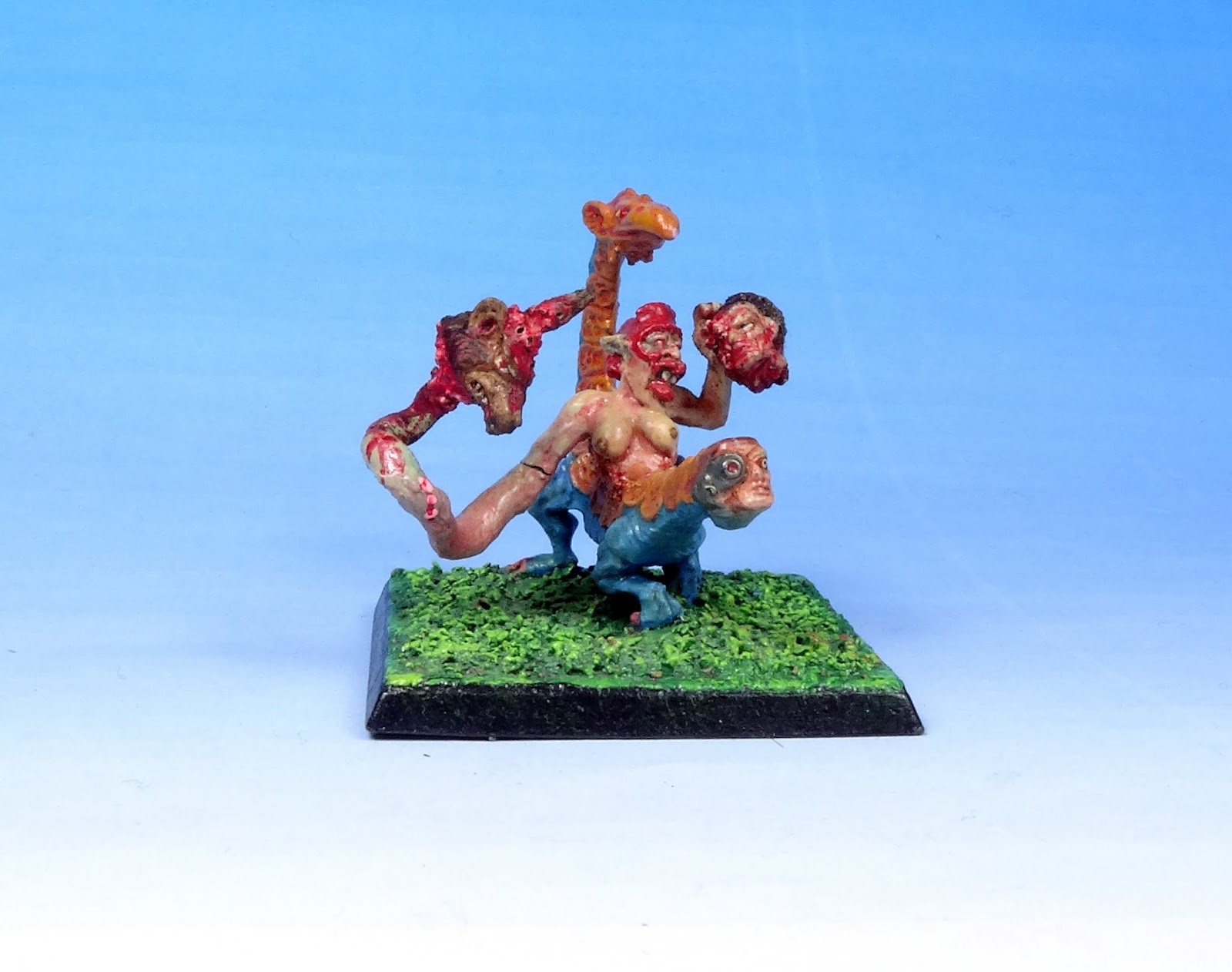 The deal implied for me to make it new though so I broke it into pieces and threw the metal parts in the acetone and the plastic ones in Dettol.

That done, the plastic RTB01 marine head was beyond my ability to restore so I decided to give the model my own touch with another "face" : 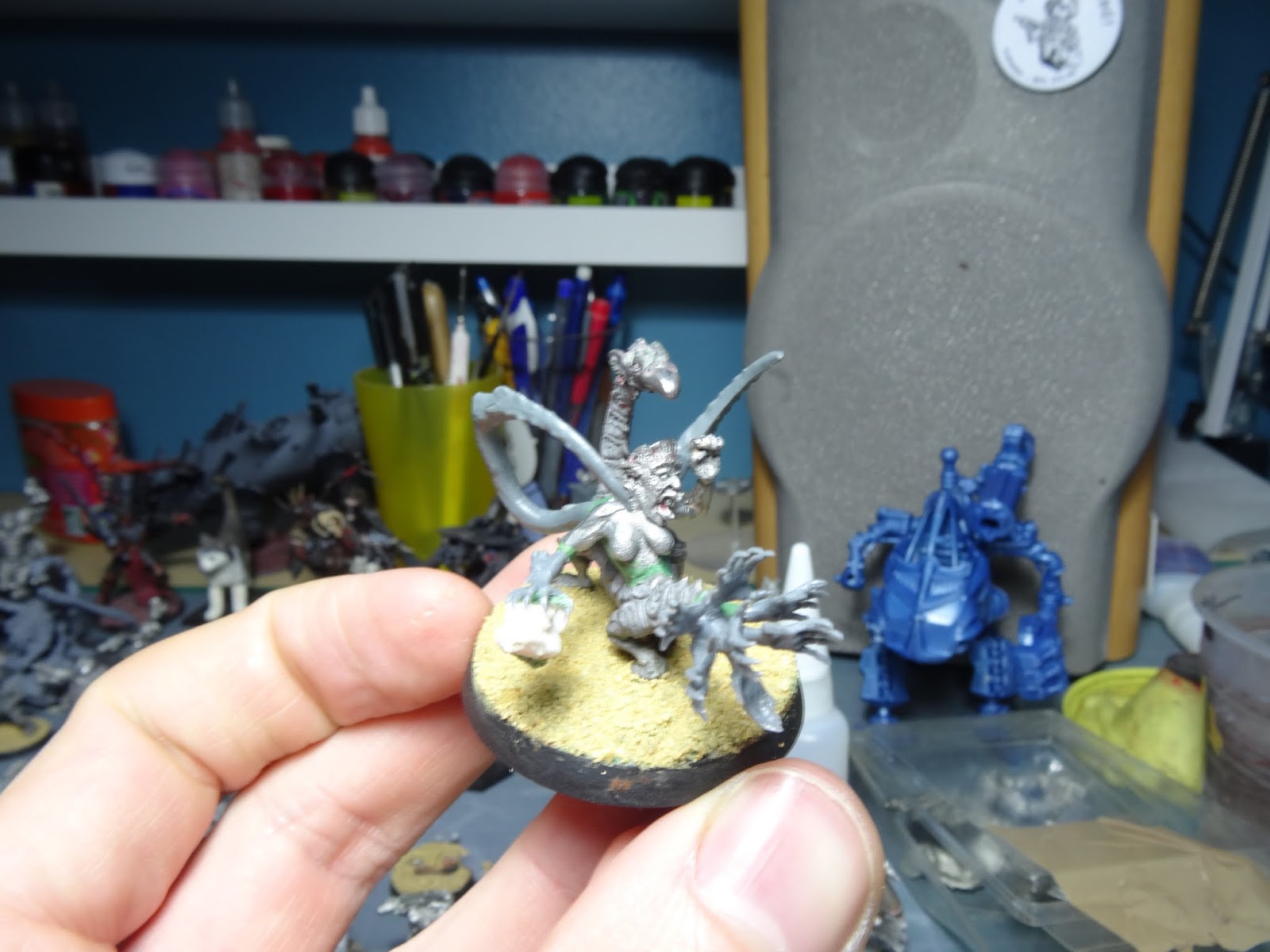 And a proper rectum (seemed more right somehow, even with a tongue sticking out of it) 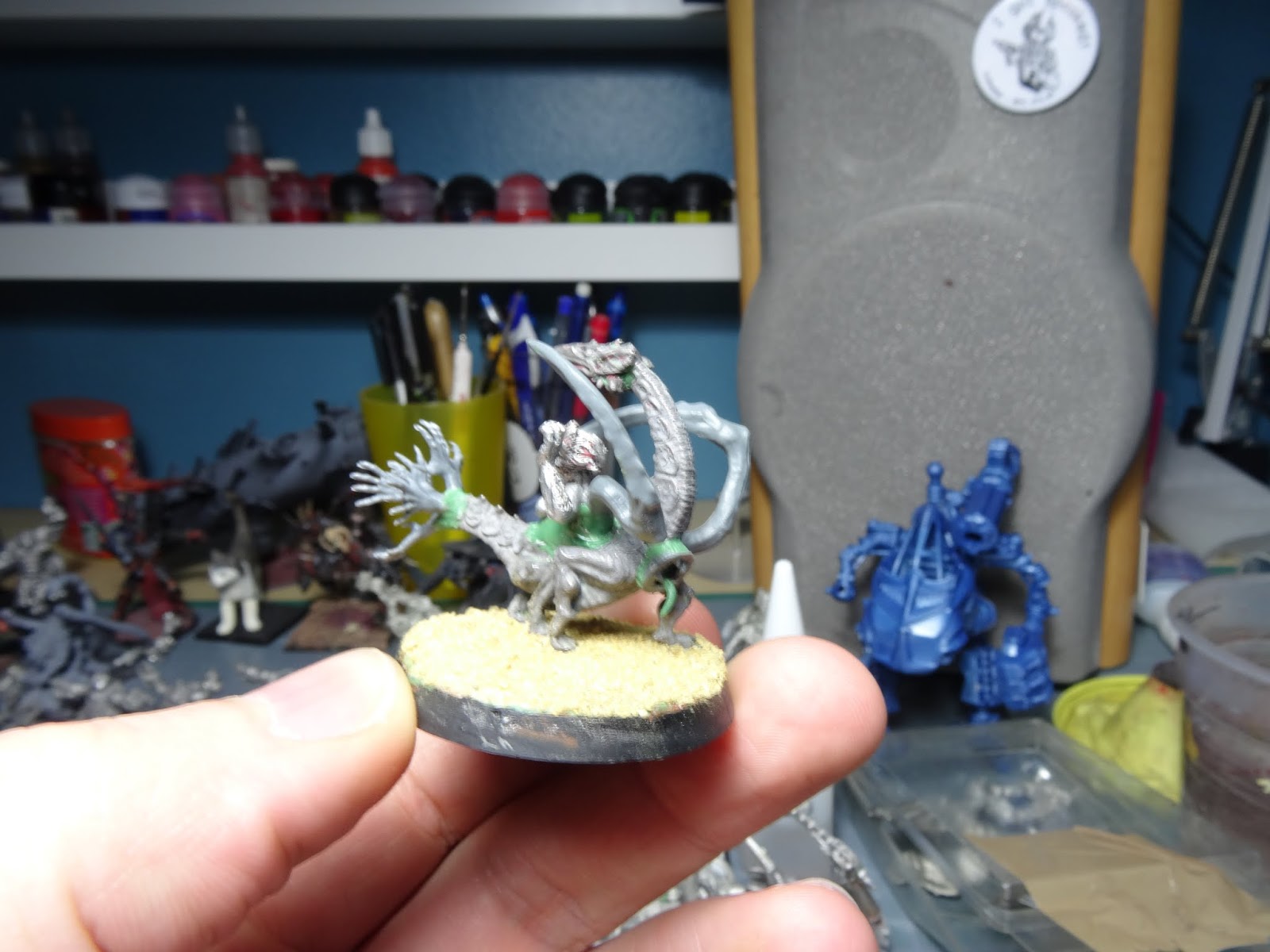 As often I didn't go very far to get my inspiration... First major influence was Fallout's centaurs, weird mutated chimeras coming from throwing humans and different sorts of animals in a huge tank full of toxic mutating liquid... The result always weird and repulsive : 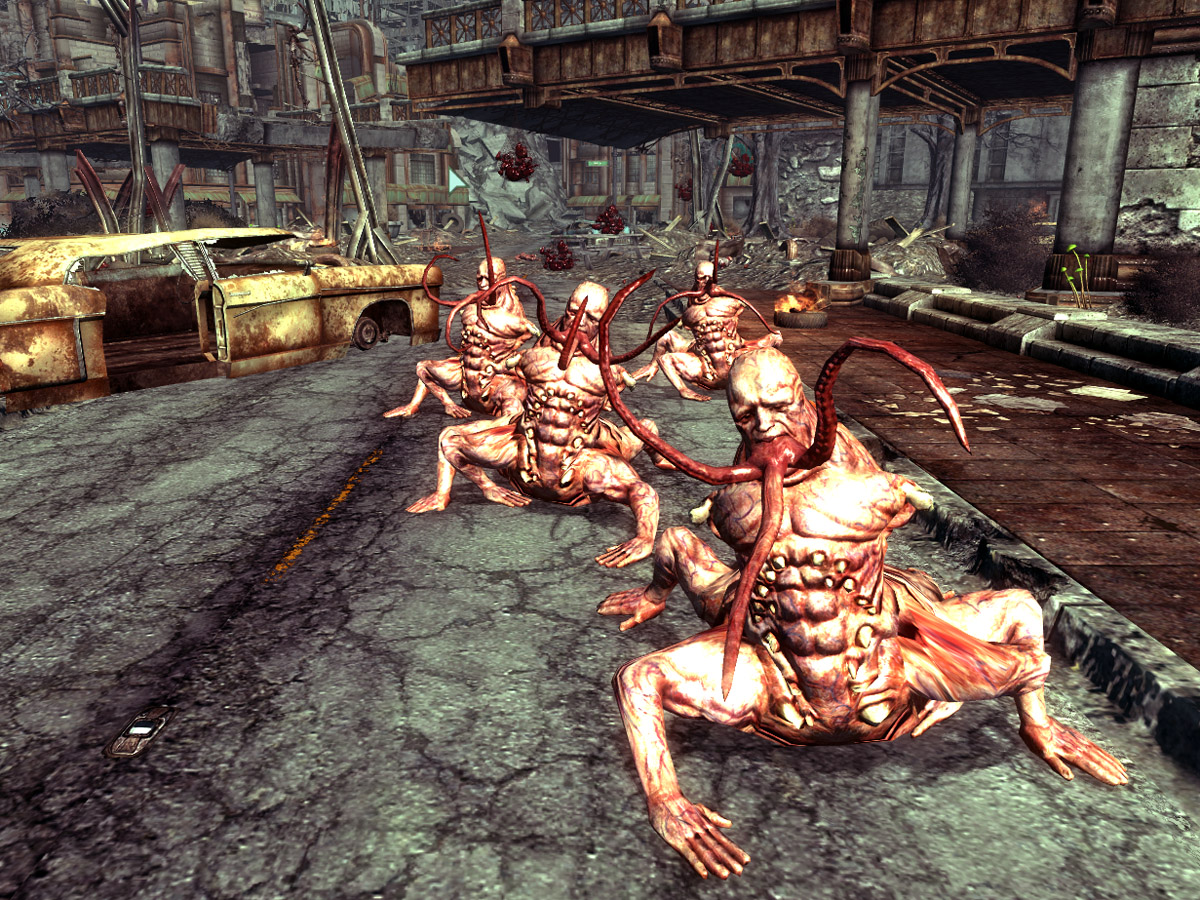 Especially in the older editions of the game :

I thought the Rad chimera is a good concept for Rogue trader but I also wanted to tie it to the older concept of the chimera : For it looks even stranger than the fantasy version of it as portrayed by Tony Ackland for example :


See below, you have the harpy torso replacing the goat, the ophidian tail and a mane of hair instead of the lion mane on the front. This part was were I changed from the original to make something a little more personnal, a little more futuristic and a lot more creepy. 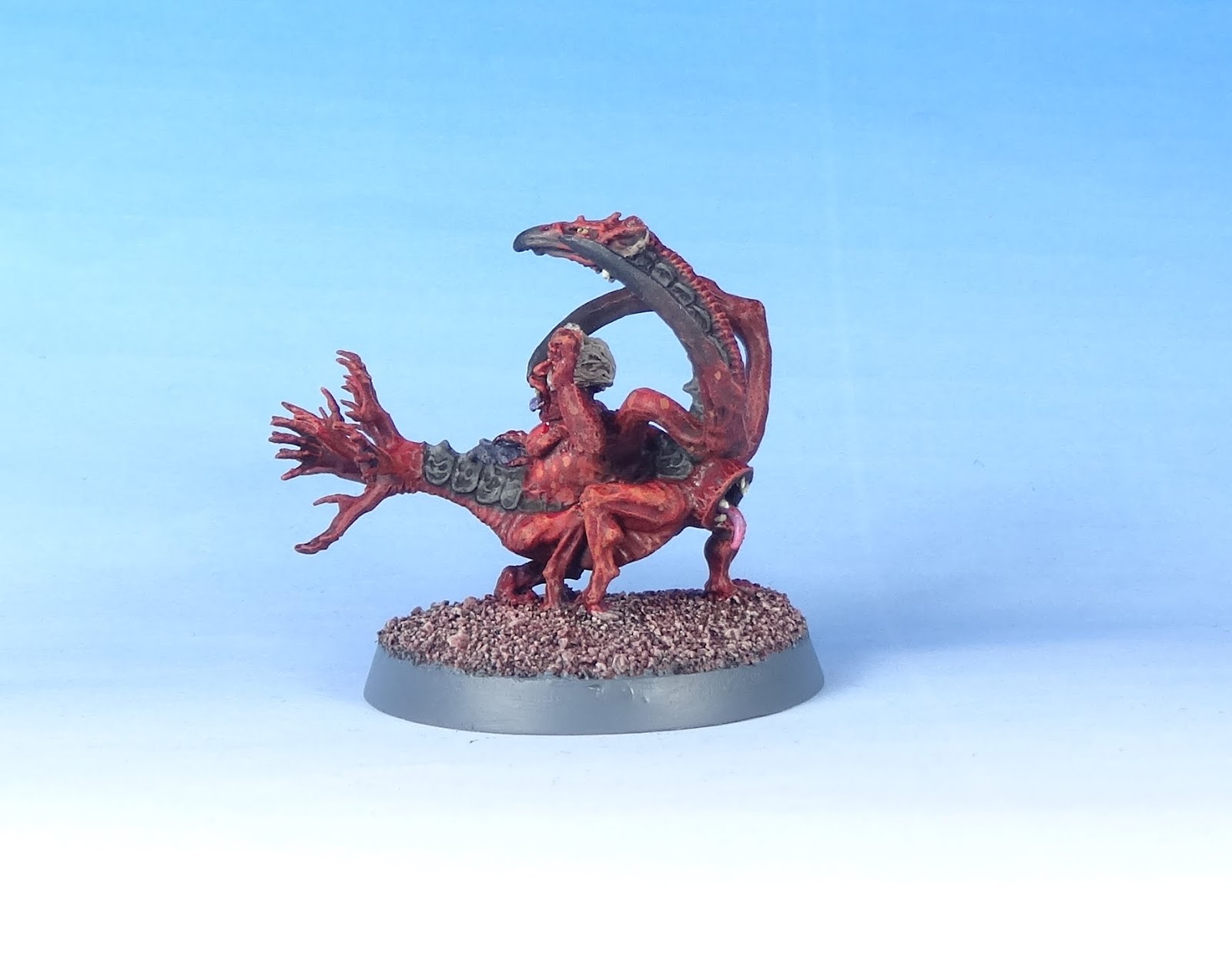 Even if not consciously, I suppose I might have been influenced by Kingdom Death's many incredible models as these : You will also notice I added 2 tentacles, well these were my way to stick to the old concept with the skaven head impaled but to give it a more symetric to show the mutation here is more due to some weird genetic mutation than to chaotic forces...

Painting wise, well... I opted for speedpainting. These last 2 weeks I was away in Canada and I managed to find some time on the plane or during evenings to read a lot of old White Dwarves between 50 and 150. I mean A LOT. And amongst those I read a lot of John Blanche's Blanchitsu, all of which chanting the merits of drybrushing and quick and effective painting tricks.

Since I had already prepared my model with a black prime and a zenithal grey spray, I threw a red glaze over the whole model and built all my highlights with drybrushes... 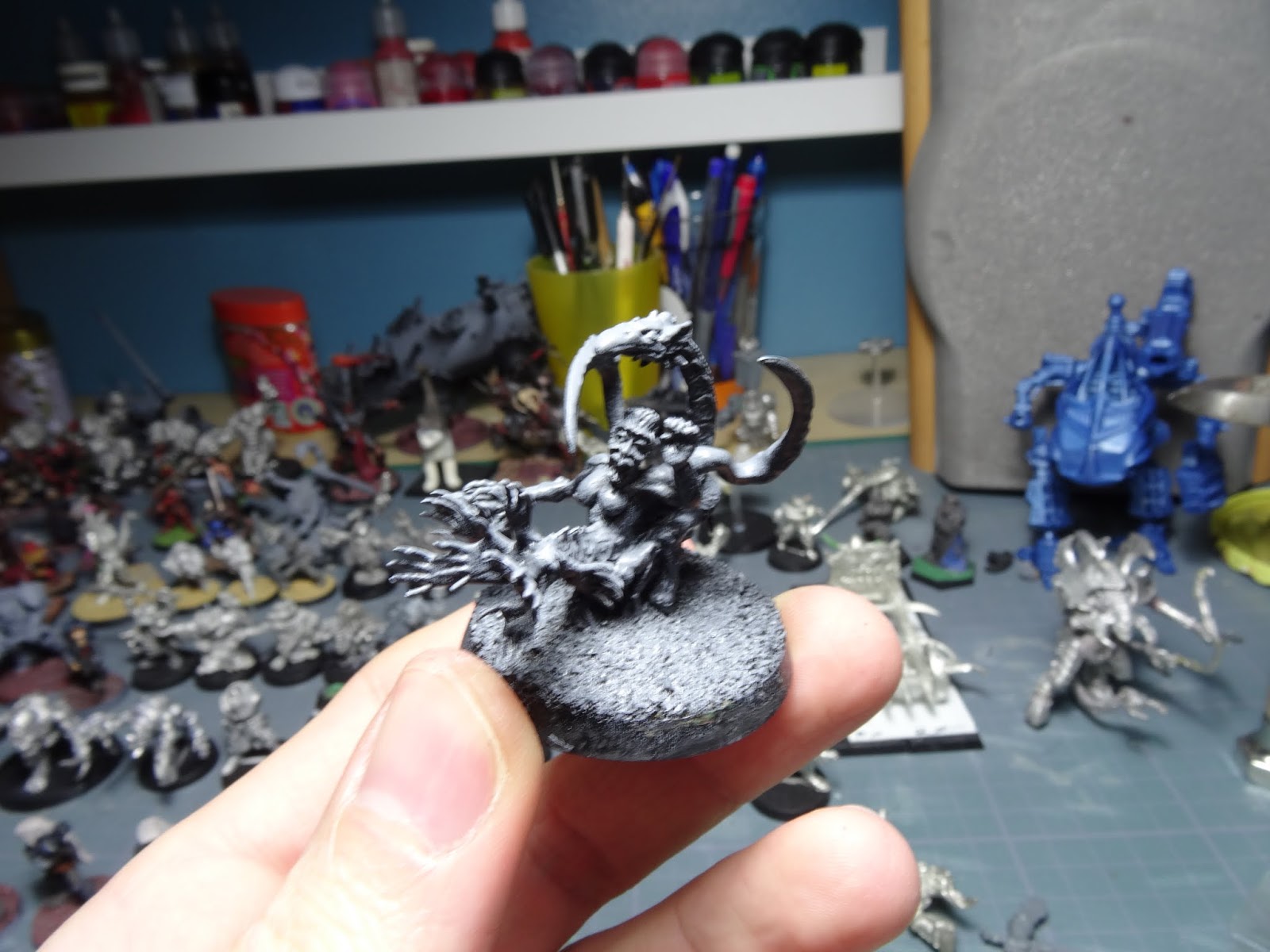 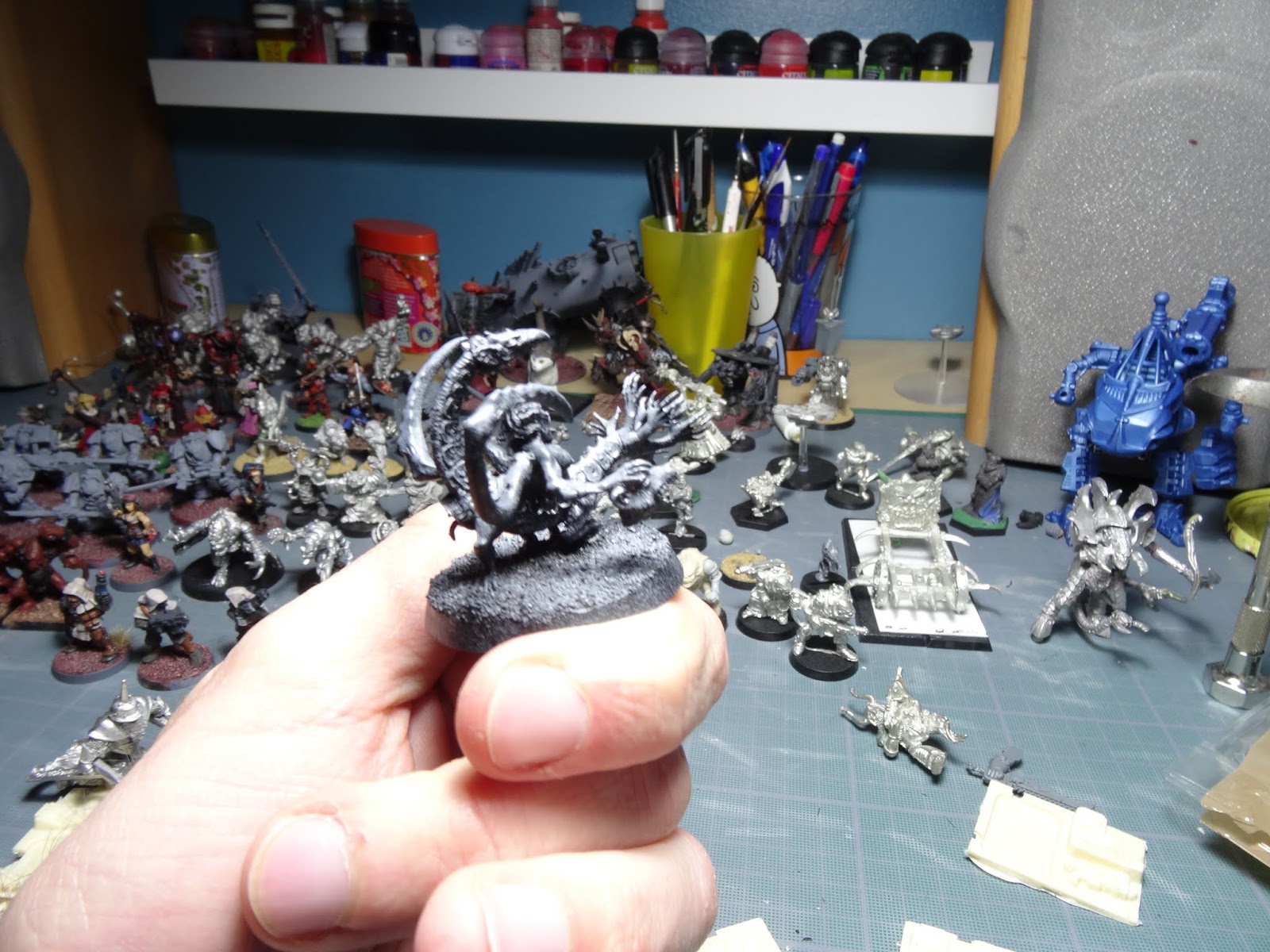 I have to say I hadn't drybrushed anything (apart from bases) in years... I suppose like me drybrushing must have been your first "technique" and you may have overused it as I have. But I can't tell why, there was a sort of regressive pleasure of using it againfor the whole model, I mean the only non-drybrushed parts are the bone/teeth parts and the eyes, all over parts have been drybrushed though he effect has been altered by glazes and other fancy tricks...
And since I mentionned Blanchitsu, the colour pattern came naturally with a red skin and black and white as spot colours... 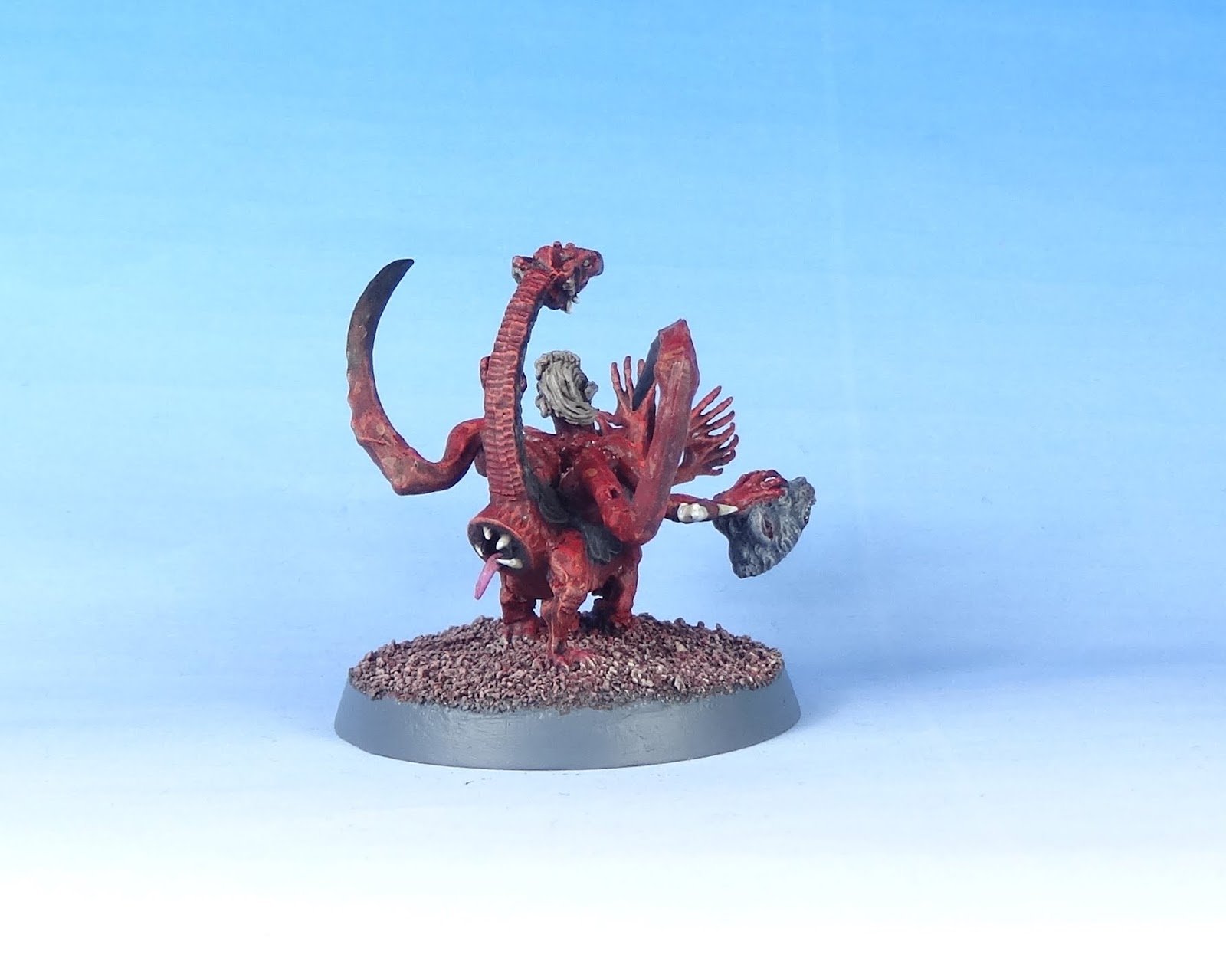 So there you have it, my Rad chimera, I hope you like it, it was a way for me to get back to the brushes after a 3 weeks hyatus. Now I've finished this one, I feel fueled up to finish some that have been waiting for way too long... 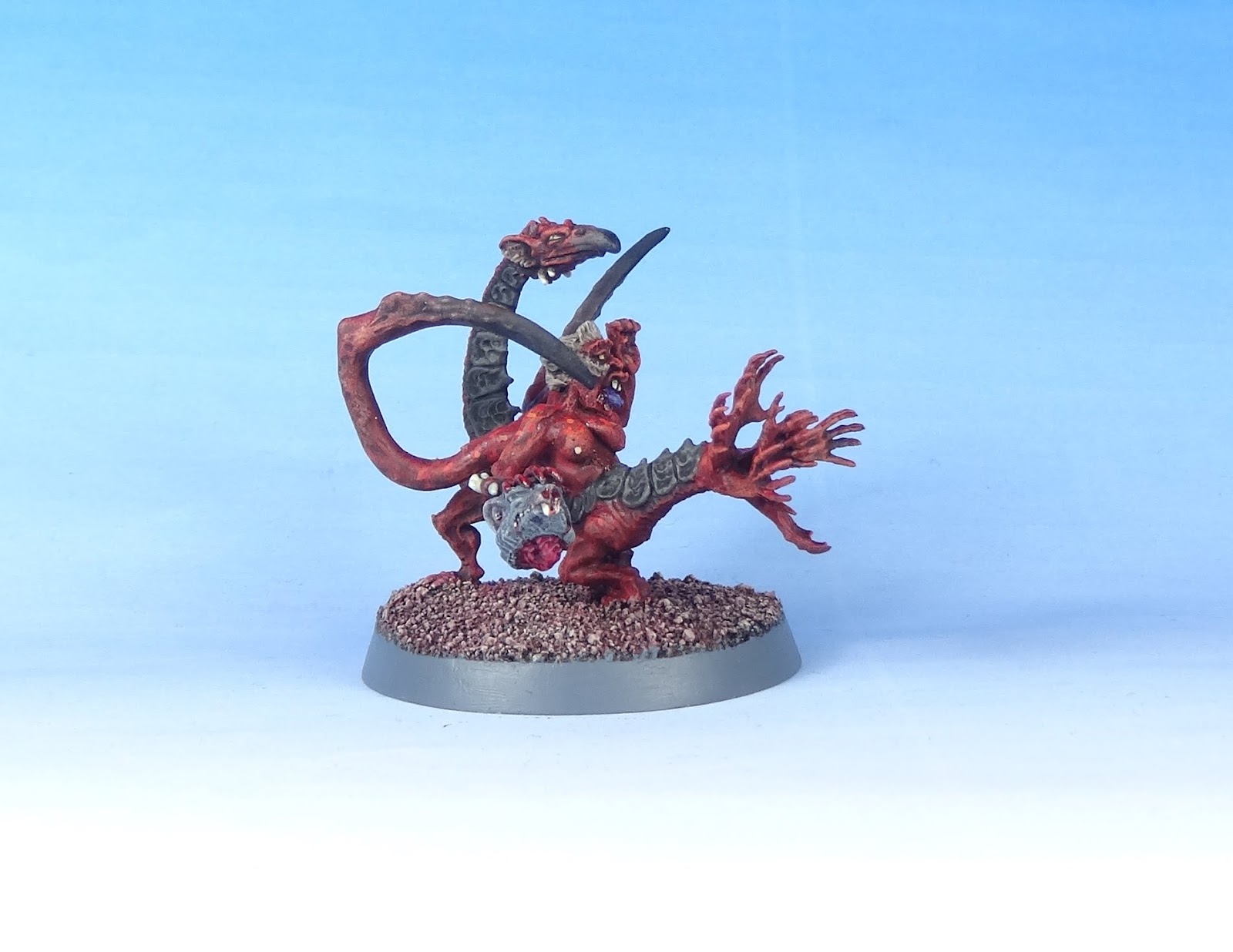 That's a weird one done, next time...well, I don't know what next time will be about but it should either imply space dwarves or underhive hunters...
Publié par Asslessman