Today we have 2 new members for Space Roger crew and they're no average guys.

First one is a favourite of mine, the space skeleton. 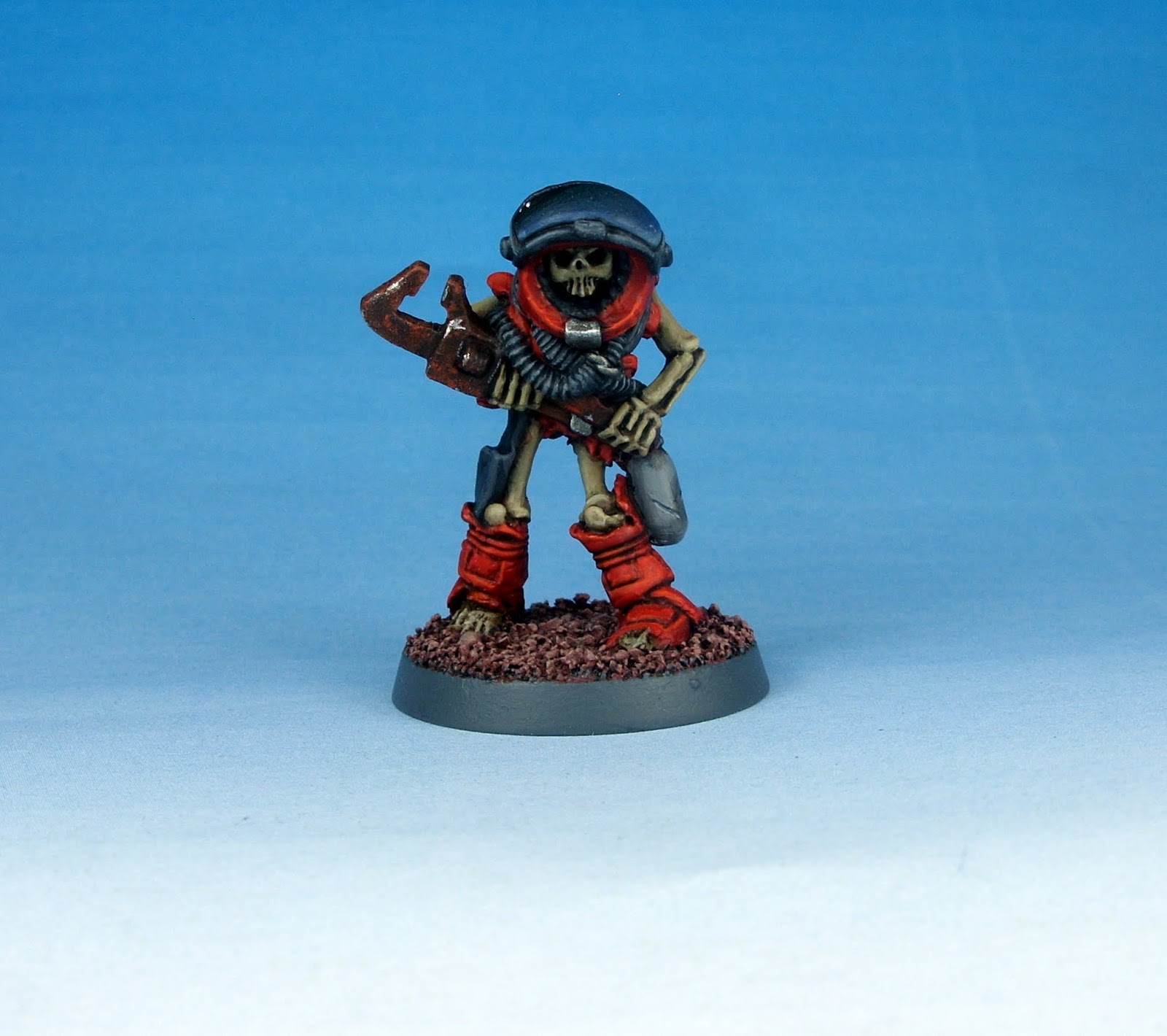 As you can see I painted this one with bright red colours to fit with the rest of the gang and because  traditionnal white space suit would have looked funny with the bones, offering too little contrast. You can also note I opted for a rather dark bone tone because I wanted our little friend here to look quite old, hence the brownish bones and the very corroded wrench.

This skeleton is one of the oldest members of Roger crew. His name is Brook and he has been the lead mechanic on board since he first met Roger.
One trait summarizes Brook : he is stubborn (and ill-tempered, a dreadful combination). He just won't admit anything, he will never come back on his word, he will never flee or turn back. He is desperately stubborn. Though this particular trait proves very tiring for the whole crew, Roger does appreciate his mechanic and copes with his atrocious mood like it is nothing.
It is to be noted that Brook Stubbornness is in part the reason why he is a living skeleton.

Years back, Roger and the then young and muscled Brook landed on a feral world where a huge part of the crew was abducted by an evil sorcerer. This sorcerer killed a good part of the crew to reanimate them with unholy spells. When Brook woke up, he started to complain like he always did (and does) and the sorcerer realized that this particular being was so stubborn he wouldn't even admit he had been killed and resurrected. An epic argument rose between the necromancer and Brook which resulted in Brook smashing the evil man' skull with his gigantic wrench.
Since then Brook has never admitted once that he no longer was the muscled youth he was then and that he is now only a pile of bones. This tremendous willpower of his maybe the source of his salvation.
It is not rare to see Brook lifting weights and exercising just to "stay in shape" and while all the other crewmembers but Roger laugh at him, Brook doesn't intend to change one thing in his habits. 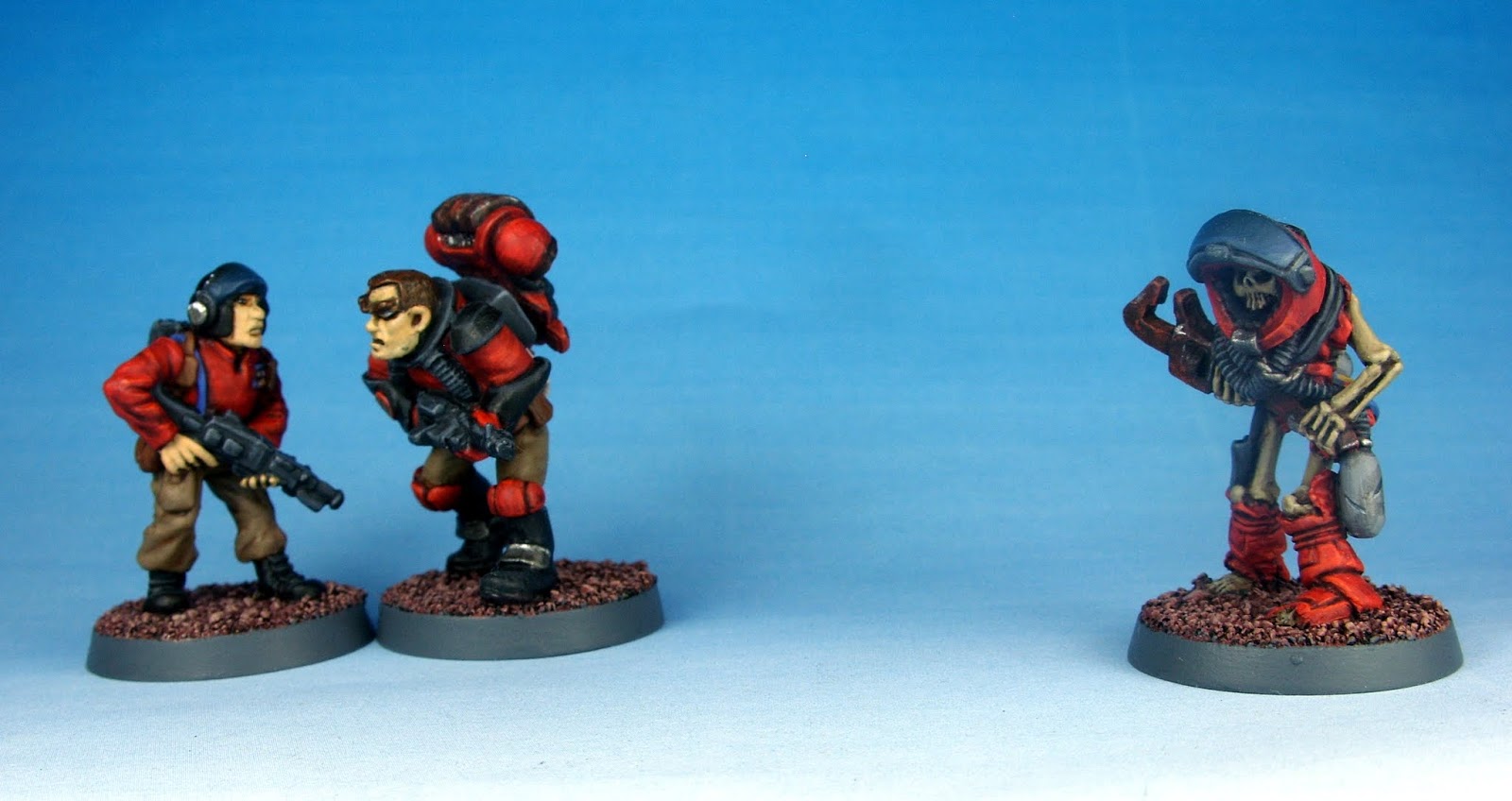 "- I tell you, he is still lifting weights as if he was going to grow muscles, that's insane !

-HEY ! I HEARD THAT ! IF YOU TWATS WANT TO STAY FIT LIKE PILES OF BONES THAT'S YOUR PROBLEM ! I LIKE MY MUSCLES AND LADIES DO TOO ! 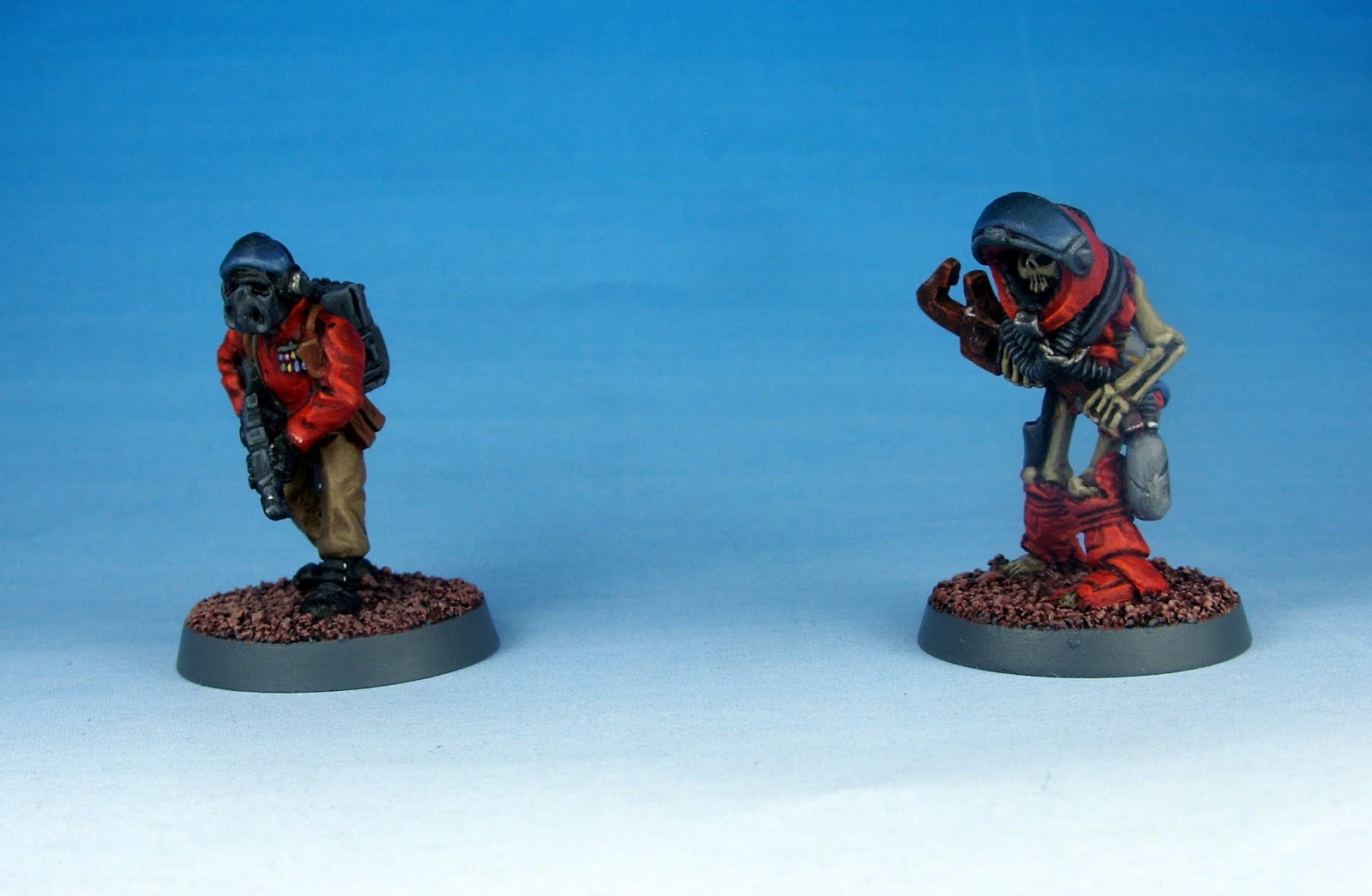 "- SOD IT ALLAEL ! Just how many times will I have to tell you to fill my oxygen tanks with the rest ! You think I can breathe in Space? Or maybe you think I don't have to breathe ? For the emperor' sake !

I have to say that once more, this character is inspired by One piece's Brooks (that's th e4th time I'm quoting this manga as a source of inspiration here) which happens the undead musician of the hero's crew. I thought an undead mechanic was cooler though :

The miniature is one of the limited releases and it dates back from before Rogue trader if I'm correct. I got it in a poor shape for 99p in a mislabeled sale on Ebay and I'm very happy to have been able to remove the horrible base the previous owner had built with tons of Milliput (the model's feet were litteraly drowned in it) : 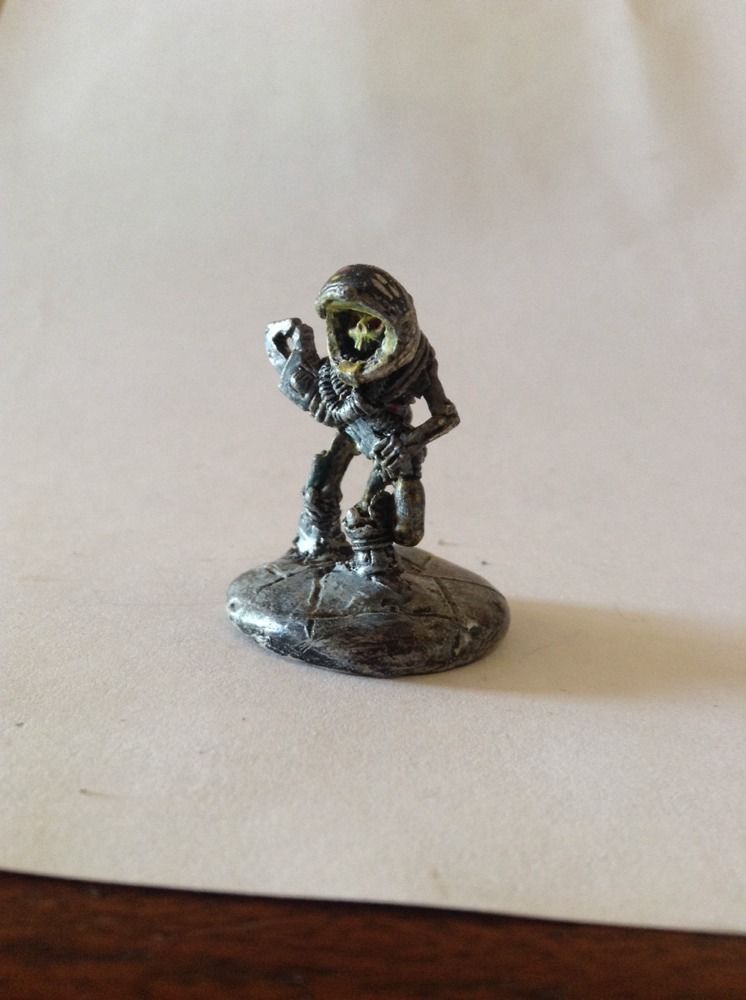 Our other new member is Zan Kieff, he is based on the famous Oldworld Jack model and I love him a lot. I unfortunately had no spare rogue trader backpack to give him so I gave him a space crusade one which works just as fine.

Since I wanted to show Roger's crew have been roaming space for ages, I gave him rusted and corroded equipment, to show though the gear seems worn-out, the wrew members are still engaged in their mission. 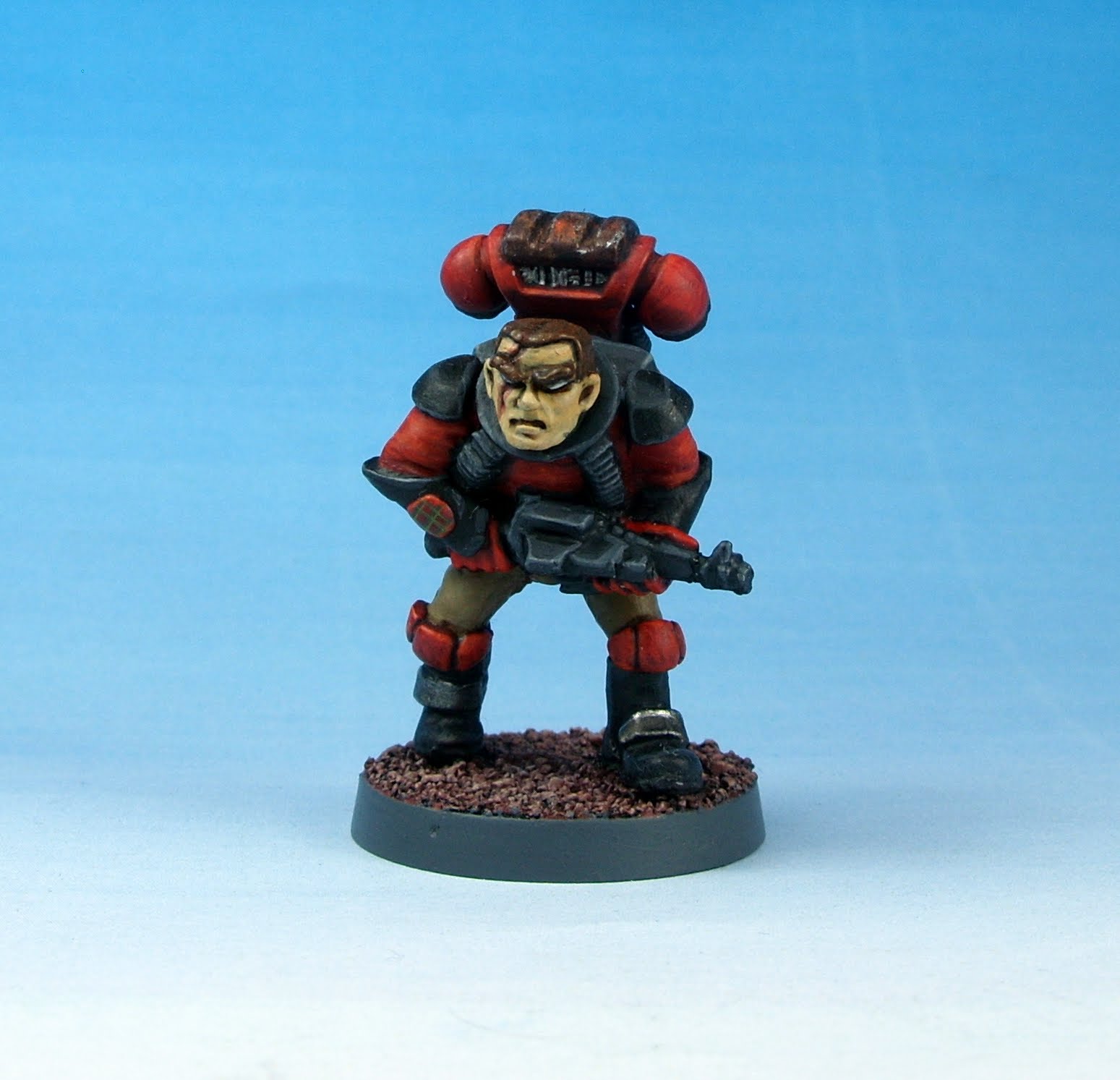 You might be asking yourself why the eyes are painted white ... well they're not, theyv'e been painted silver to represent contact lenses. the eyes on the model are waaaaaay to big and I couldn't find a way to paint them a satisfying way. I then remembered contact lenses are a common equipment in Rogue trader so I gave him a pair and it makes him look better (oh and it does give him a osrt of Morpheus look à la Matrix...).

The model is way bigger than the rest of the crew but I think it's just because Zan was born on a factory planet where people are way bulkier than average humans... 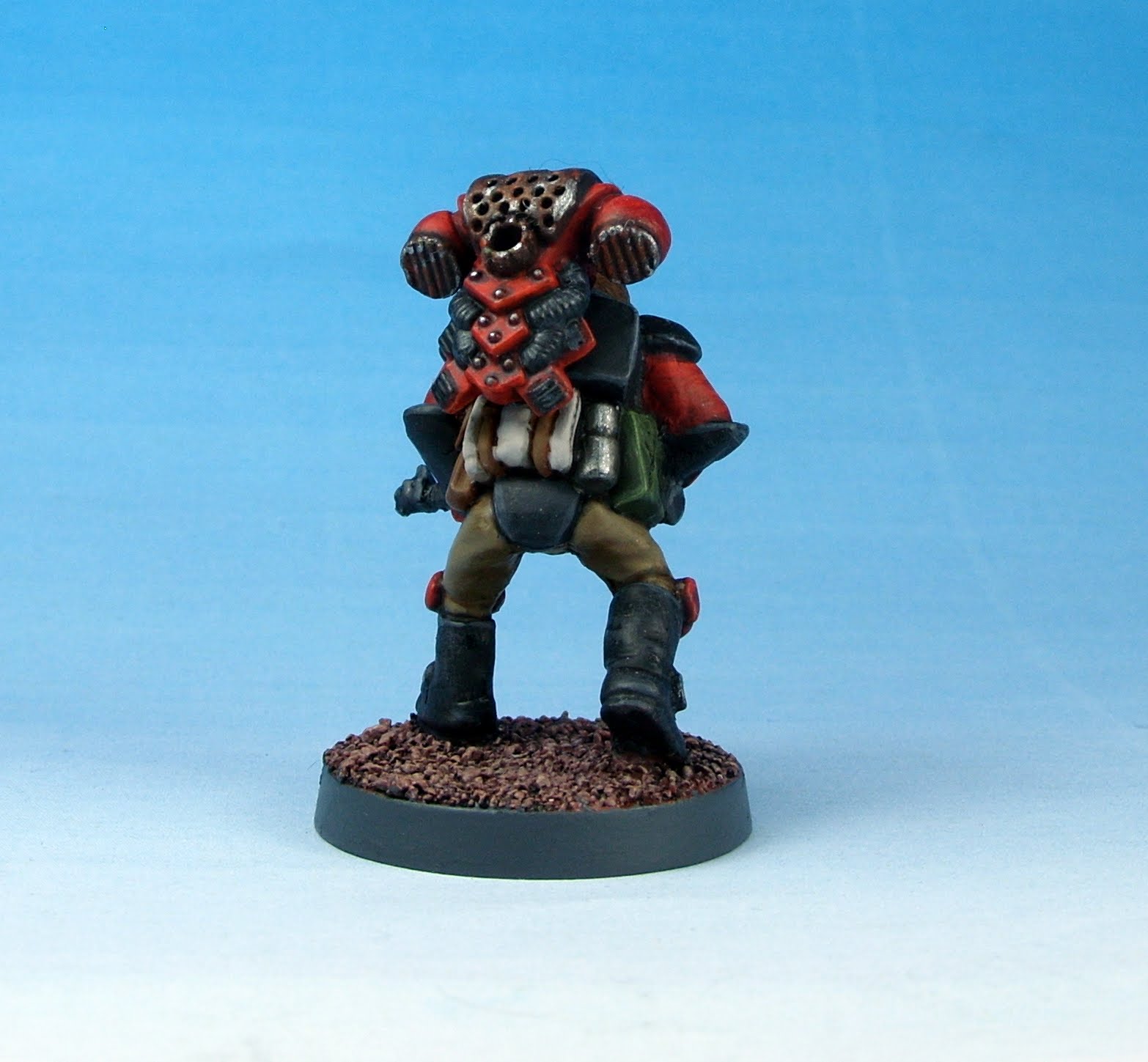 And here is the traditional group shot with only 2 members missing... 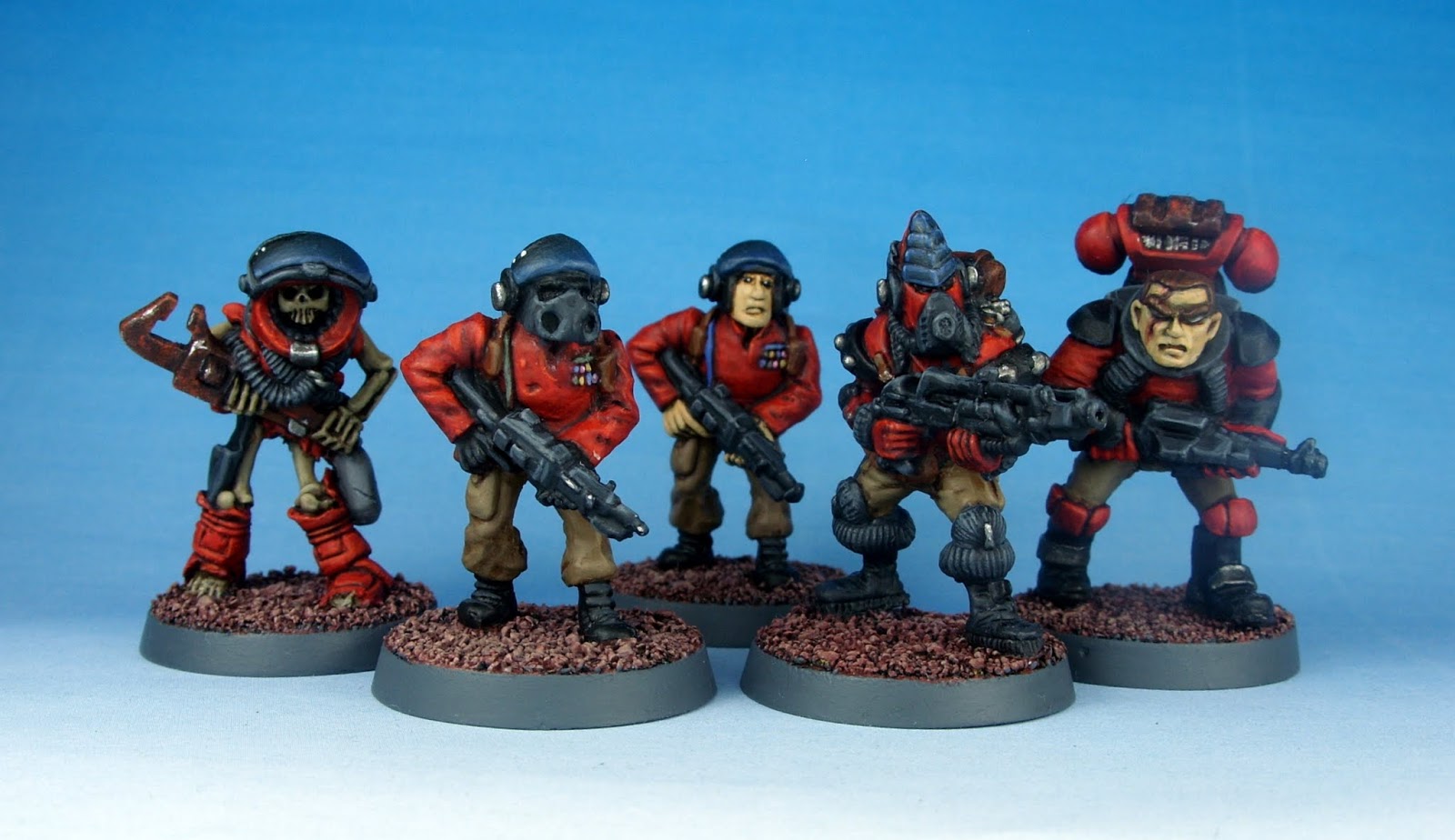