A rebel's tale in the Rogue trader universe

Hi people, today let me present you Poakey, a rebel underhive dweller who has seen the light of the Starchild and joined the band of Lucas Stern, Sensei extraordianaire.

Poakey is a youth whose athletic skills have always been reliable and which earned him a good place in the local Deathball league. Poakey was playing in the Human League until he won his admission in the trans-species league but severe repression by the Hive authorities made him chose a life of rebelion instead of a sport career. It was on this occasion he met Lucas Stern, a Sensei, hero of the Starchild and defender of the oppressed. he has then been following him across the universe to help for the good cause. 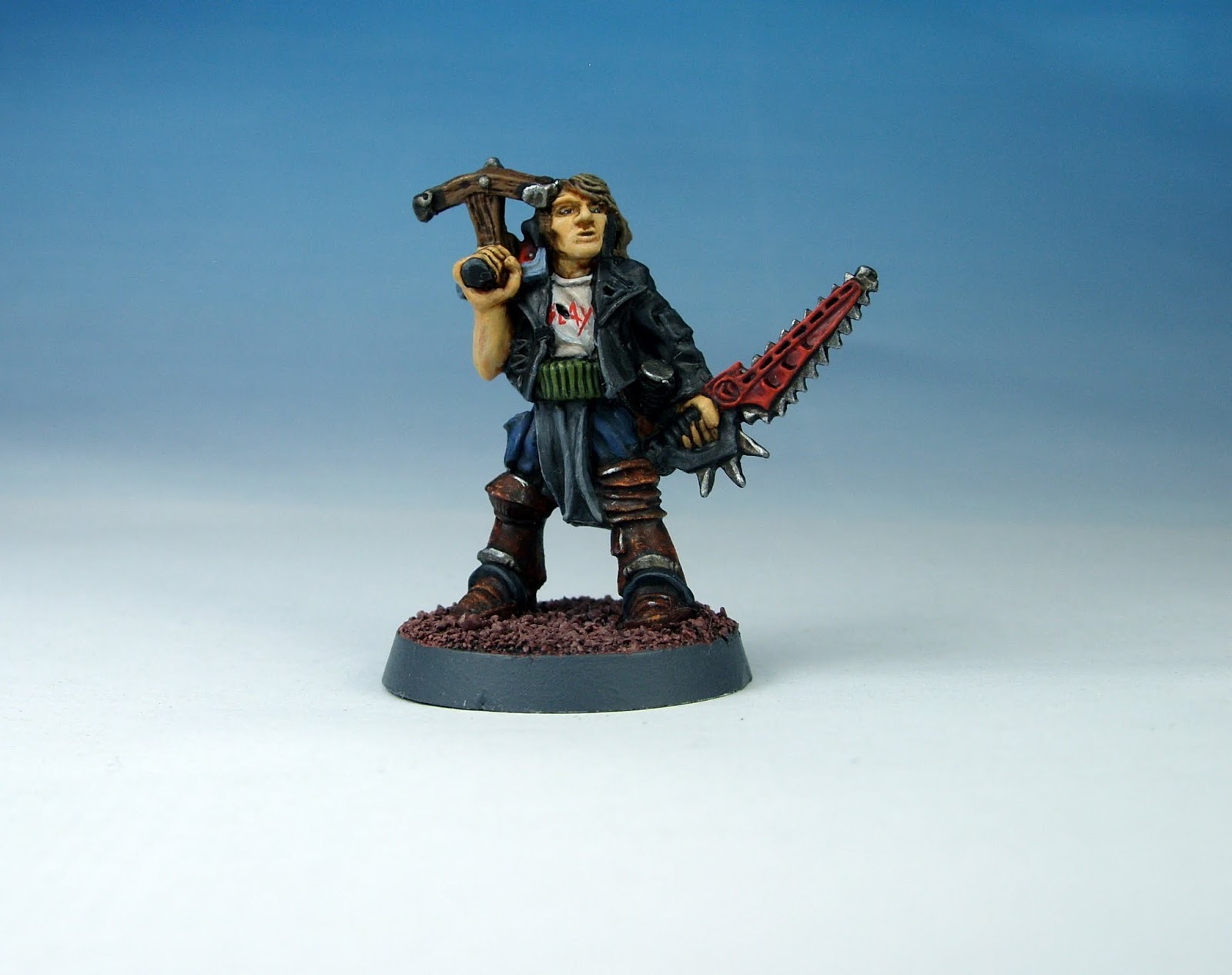 This model is a Hive worlder and like quite a lot of thsoe you'll see here, it comes form the excellent Rogue trader adventurers range which integrated a lot of older references and some very good additions.


But what were the inspirations for that miniature and the way I painted it? Hum well, I can't hide that the quite peculiar haircut with short hair on one side and long hair on the other immediately make me feel about someone most 80's fans know :

I strongly advise you to read Zhu's excellent article about his particular haircut and how you can see it on other references like Kaleb Daark.

We can note that the model is wearing a pair of power armour legs on top of his regular outfit. I really like this detail because it reminds that in conforntation (Laserburn's heir and Necromunda's predecessor) it was possible to get power armour parts and to wear them even though the real benefit of a power armour only came when the power pack was worn with the rest. 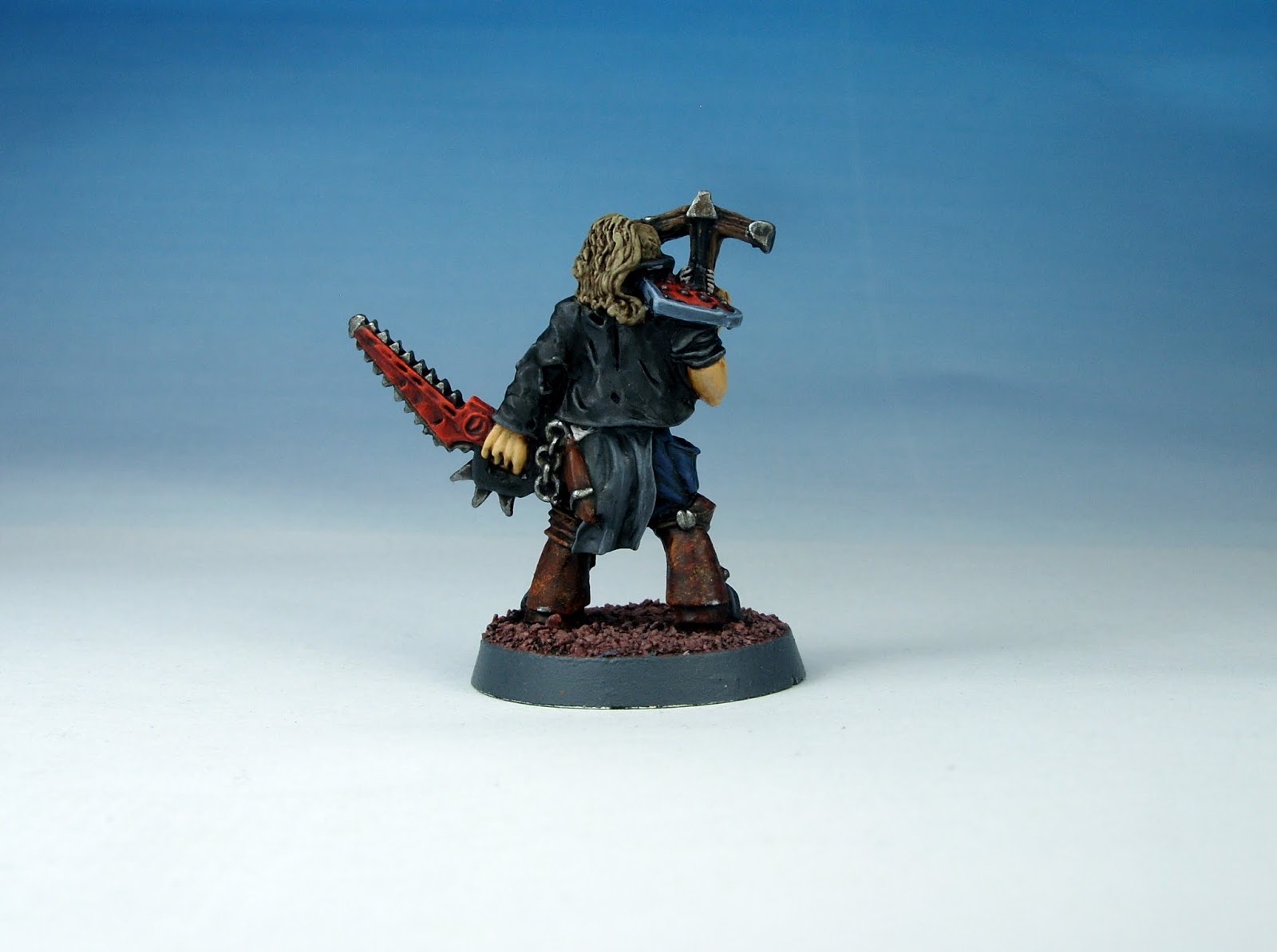 As it is now, those pieces are probably more of a burden than anything else but I like to think Poakey is expecting to find a complete set over time ! I painted the parts in rusted steel to represent the fact he probably scavenged them from some sort of sordid place.

Another thing I like about this model is the strange set of weapons he holds. A wooden crossbow is quite unexpected in a cyberpunkish setting and the chainsword is looking more like a sort of tuned butchering tool than a real weapon. It enhances the fact this fellow armed himslef with what he had under hand.  I also painted the shoulder pad as if it could have been a sort of sport protection to remind his past.

The belt's been painted green against all colour theory logic for the sole reason it reminded me of the belt on this guy (yeah I know, pathetic fanfoyism form a pathetic maniac) :


Now here is the traditional group pose with the 3 members so far, the 4th being nearly done and the 3 on their way. 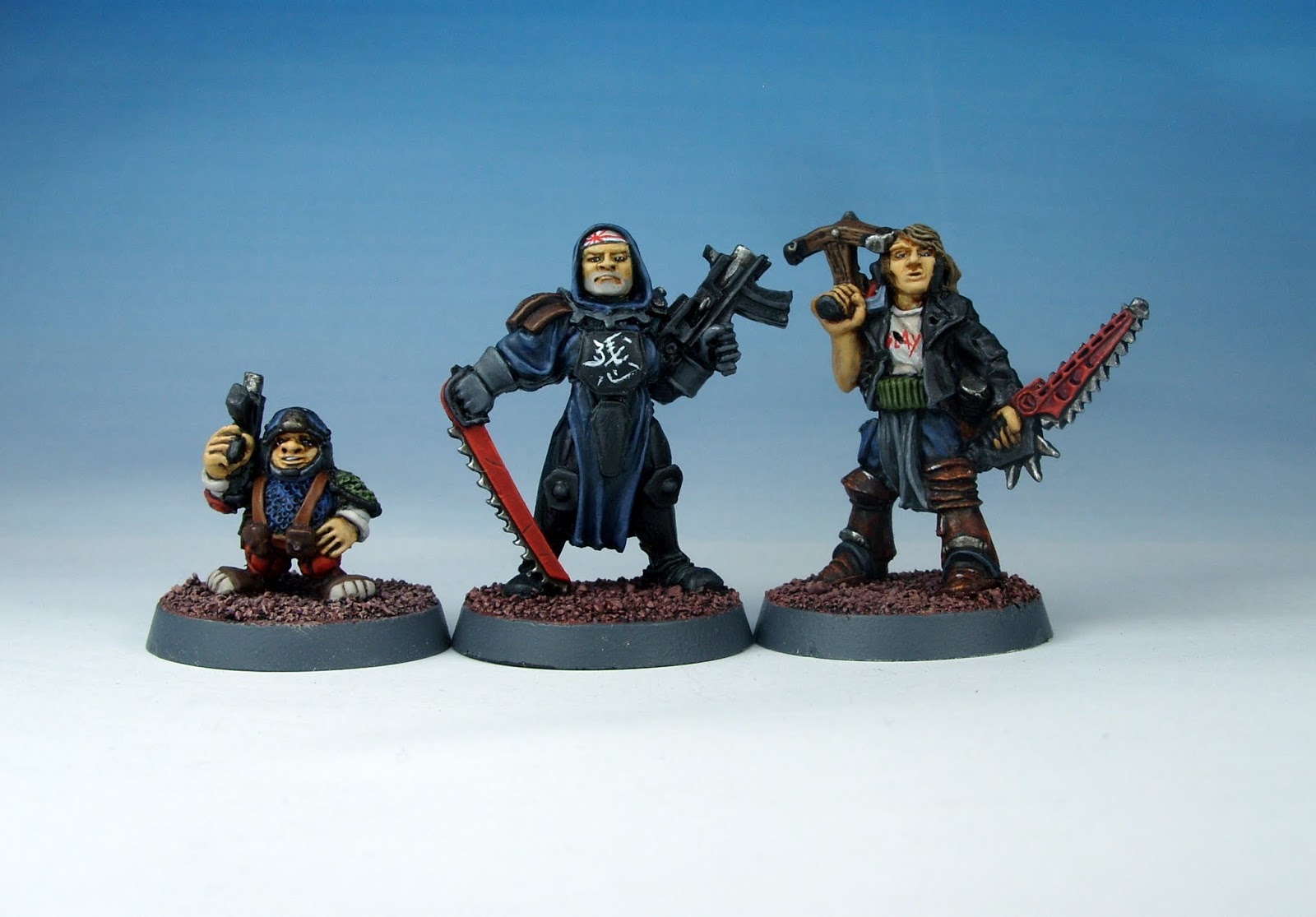 While we're at it, I thought I could show you the next Rogue trader band I'm working on. It's the band of Roger Ferrero, rogue trader and space adventurer. You can see that his band has changed a little from last time but the background is still the same (yeah, the space skelleton is going to be a playable member of the crew).


Another thing which has had my interest lately is the preparations for BOYL 2014, the Oldhammer event in Newmark this summer. Since I 've decided to join a little game implying several sensei, I thought it was the good occasion to make myself a grey sensei (aka BAD sensei). I decided to base my model on Christophe Lambert in the Highlander series and here is Connor Mc Lambert, grey sensei and ennemy of all good things.
I had particular fun making him a perveted katana from different sources and I'm quite pleased of the result. The kendoka in me is particularly pleased that his right hand is holding the saber the right way but that's the part most of you won't care about... 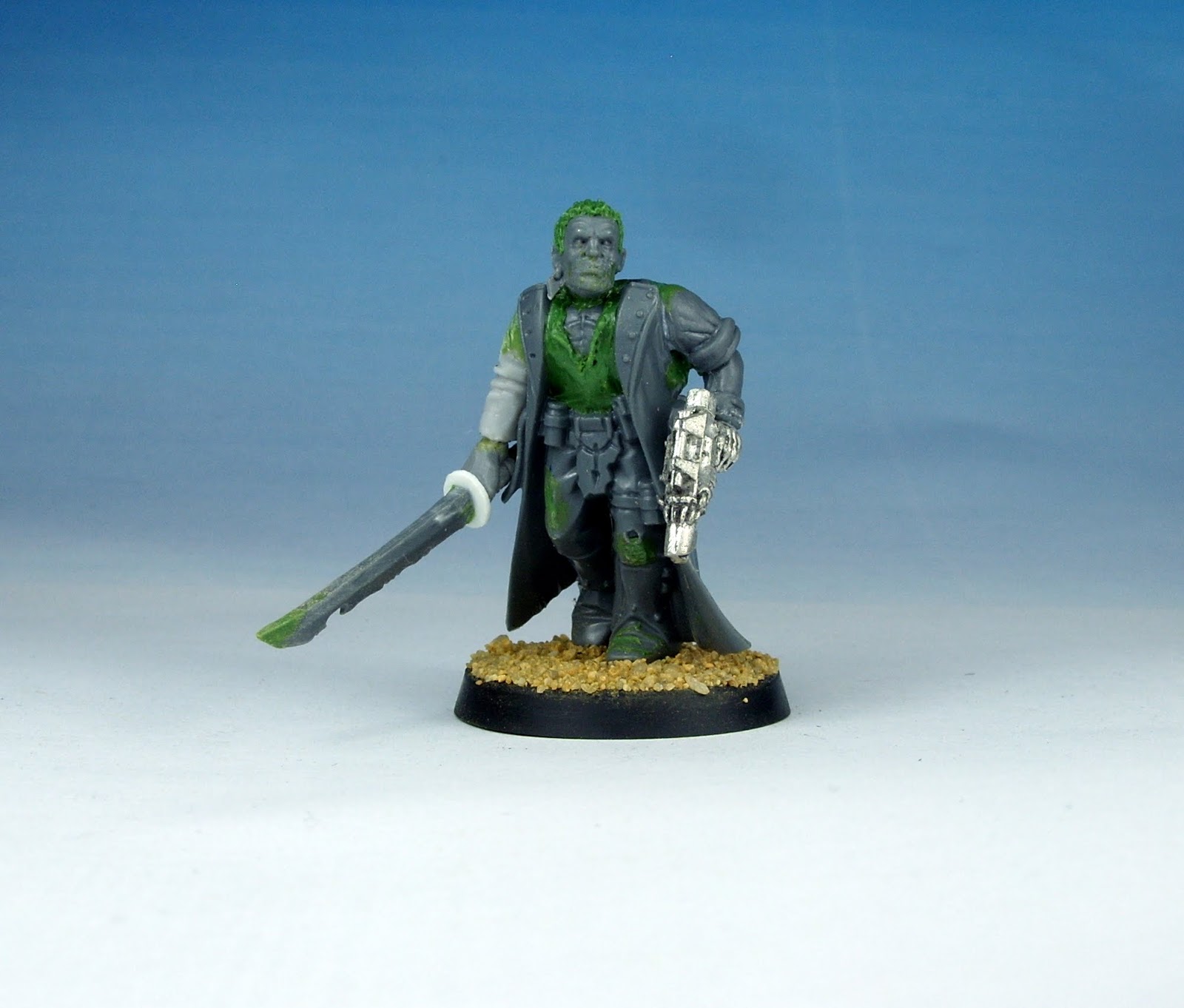 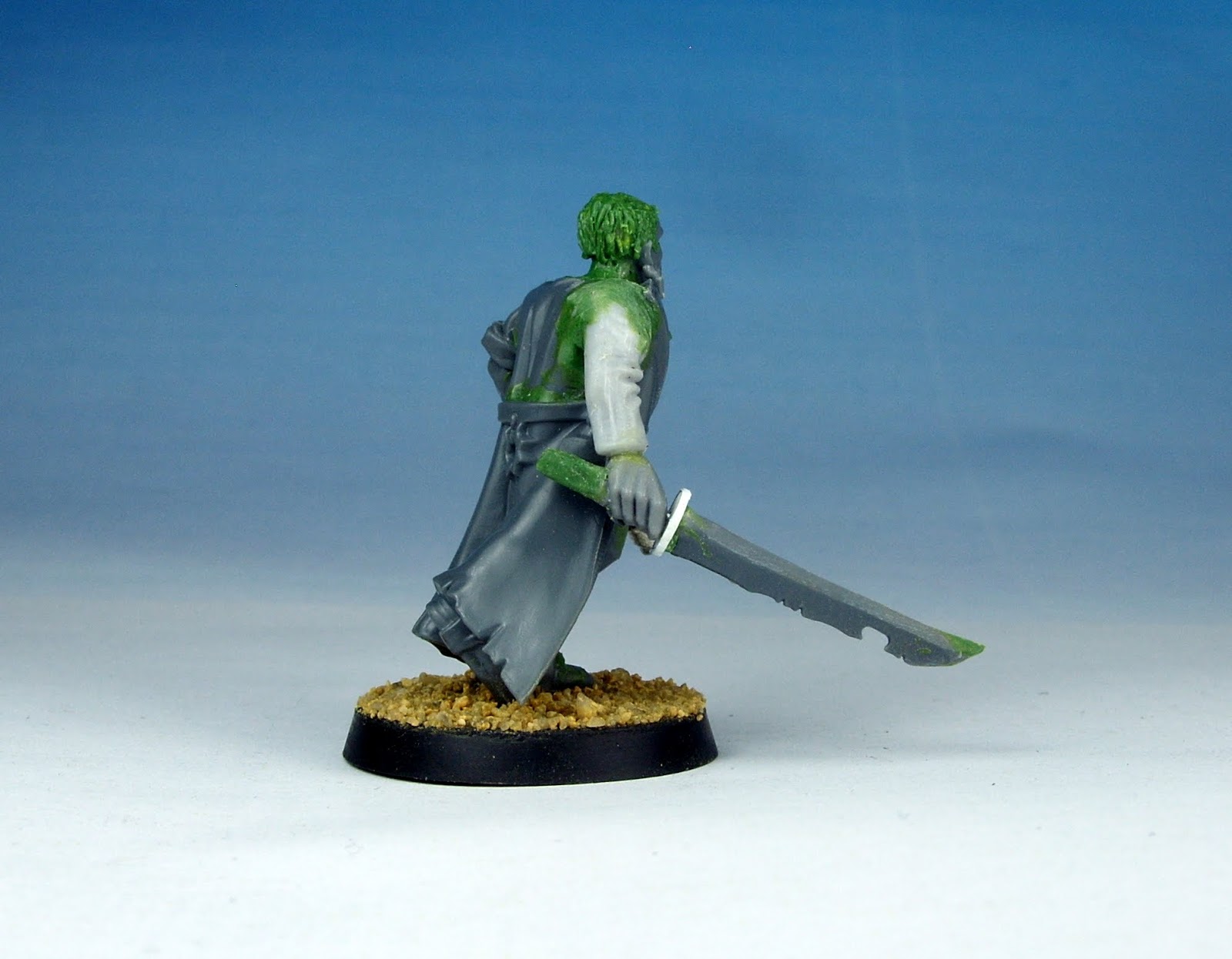 What you can see here has been done in 2 nights and I only need to add some green stuff to make a new collar and to refine the sword and he's good. I used the dark vengeance cultist as a base and it's a really good model to work with. I love how a simple modification can make him look completely different (I have even as we speak some other plans for the very same model) : 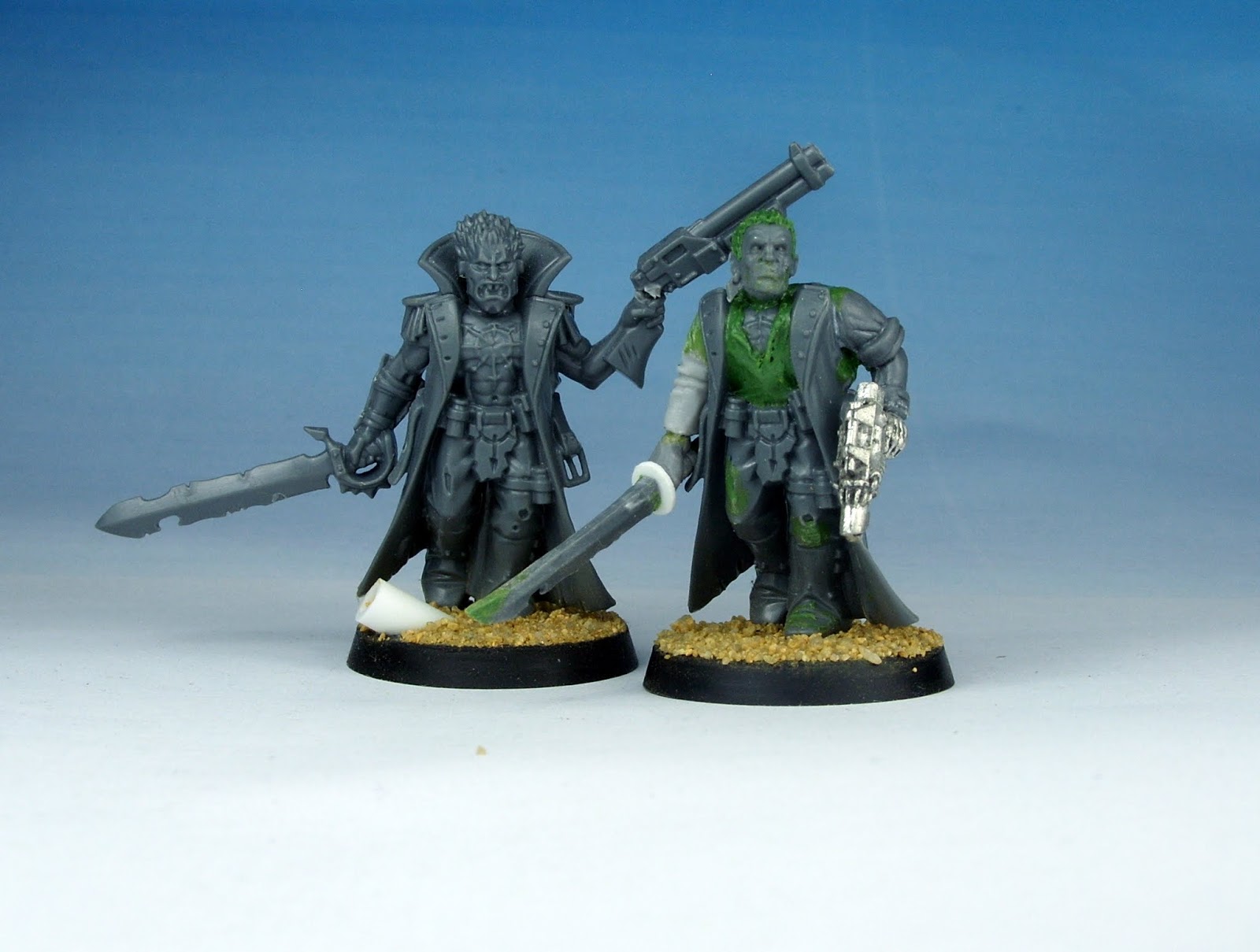 Oh and while we're stillat it, let's have a look at some henchmen I kitbashed for my imperial nobles with fantasy imperial trooper, scion tempestus and regular IGs

In the next episode, I'll declare the winner of my little give-away so stay tuned !
Publié par Asslessman