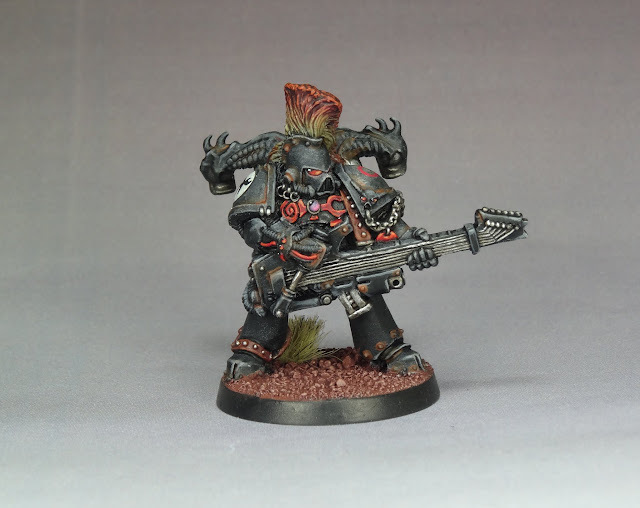 After quite and exhausting but pleasant week end hitting people with a stick and screaming at them wearing a blue skirt and an armour, I finally took the 10 minutes required to finish what had remained a WIP for too long...
I've had this model for about 22 or 23 years now and although it's been painted twice in the outrageous colours you'd expect, I still wasn't satisfied with it.

Now I'm not going to do a History class here but Citadel have long been associated with the Heavy metal culture in many ways : the name of the painting studio, the musical tastes of some people in the studio, the studio actually producing a couple of groups amongst which the most excellent Bolt Thrower, some studio members being actual metal musicians (Mark Gibbons) and so on.
The noise marines are the outcome of all that and specifically of one of D-Rock's songs :

Now Bolt Thrower and D-Rock don't have much in common apart from the long hair their members sport really. The noise marine figure designed by Jes Goodwin clearly draws its inspiration from the heavy/glam/dragon/hair metal side of the metal genre.

That's all nice and fine but I'm not satisfied with that.

When I hear NOISE marine, I'm not hearing BAD TASTE marines if you see what I mean. That means I wanted to bring back the NOISE in Noise marine. I do fancy most sides of the Metal genre but a few but I really wanted to make this marine a true metal head in power armour.
That meant having most of him black, just because it all gets down to how much black you can get. I was that close to giving him a black mane as well but thought a fiery red would be better visually while not breaking the visual code too much. 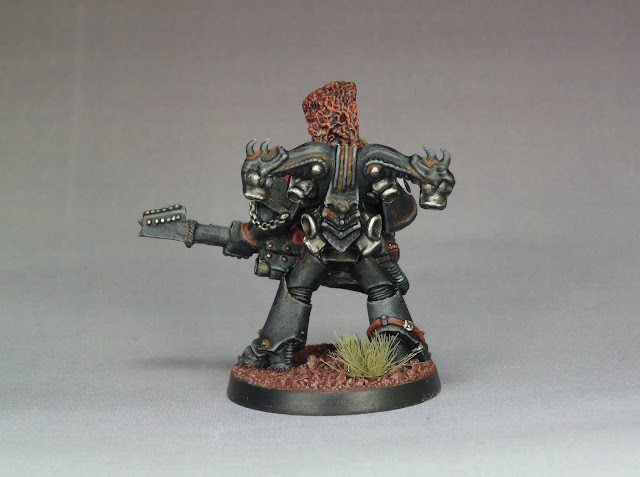 Porting musical influences into my painting is always fun and this will most likely lead to a very cool group project with the WIPsters.
I'll be painting a new Noise marine for the occasion (yes another one) and we will have some classy head banging fun ! 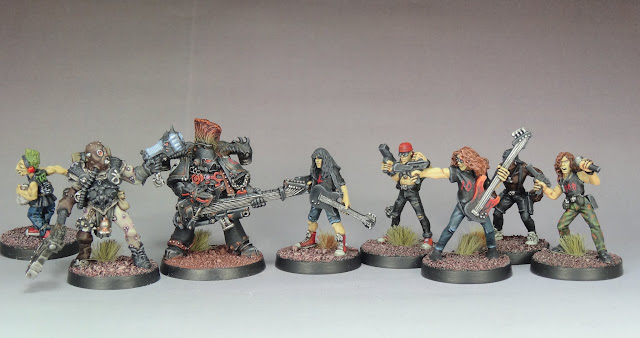 Meanwhile, plenty on the desk and a few things coming out, some long projects progressing...
Publié par Asslessman