Wow, that's quite an achievement here. A relief actually. Space skaven are long term residents at the top of my "to do " list but for some reason I've never quite managed to take the time to fully go into it. The main reason might be I wanted to paint them all at once so that sort of process tends to make things a bit more impressive to get on with.
Anyway I'm glad I've managed to pull some fingers out of some orifices and finish no less than 12 models at once (2 of the little rats above come from my rogue quest project.
But why space skaven ?
The answer lies in one name : Jes Goodwin.


The original skaven (as well as the more recent ones) all already have elements to make porting to 40k possible. Technology, a strong visual identity and they're mutants basically.


Just take a look at some of the sketches in "the Gothic and the Eldritch and you can see it doesn't take much to push Fantasy skaven into the grim darkness of the far future as Jes imagines it.

With that in mind I've worked on many models at once, they are not presented in the order I worked on but more by affinity and rank.
So here are the captain and astropath (aka Astrorat) : 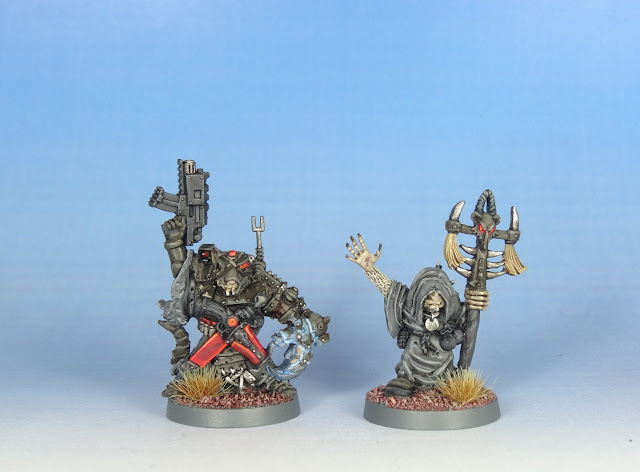 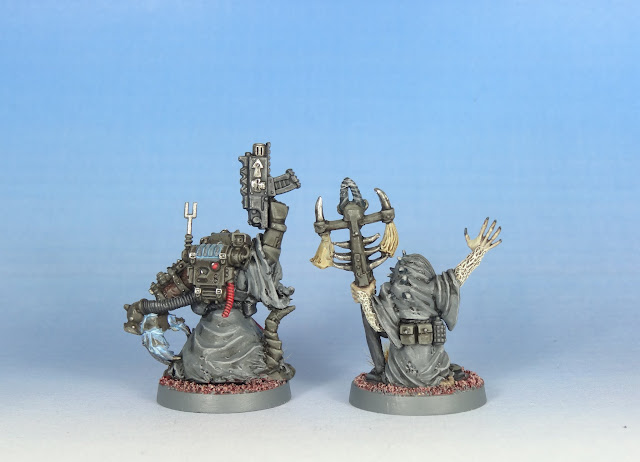 The captain is obviously based on one of the iconic characters of WHFB 4th ed : Ikit The claw. The flat YMCA pose is a good indicator of when he's from and removing his halberd was not a piece of cake I can swear : 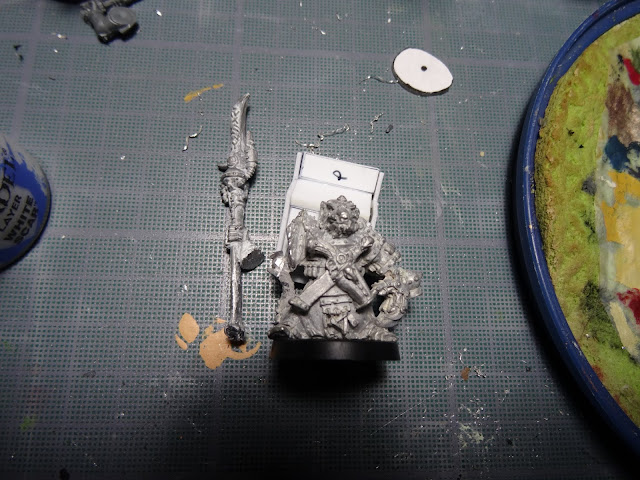 It was replaced with a modernish bolter and space marine arm to make his armour a powered one and I addd a Skitari backpack (what a wonderful kit really) to give him the power supply he requires. A little OSL to represent the lightning claw and flamer and the guy is good to go !

The astrorat is of course a wink to the Rogue Trader astropath concept which and the reference was an evidence as soon as I saw the plague monk figure (which was damaged and thus required conversion work anyway). I repurposed Ikit's back banner to make a staff for the astropath which made things complete.

Painting wise, I fist was tempted to go with a very strong vibrating colour scheme (orange and grey with dark blacks) but then I decided to dig the WW1 path a little deeper. That's how I ended up with that worn out kaki and greys. I think it does enhance the "scavenger" side of the models without making them too fantasy.

The next members were the ones that were using the most the WW1 vibe mixed with Steampunk as in the sketch below : 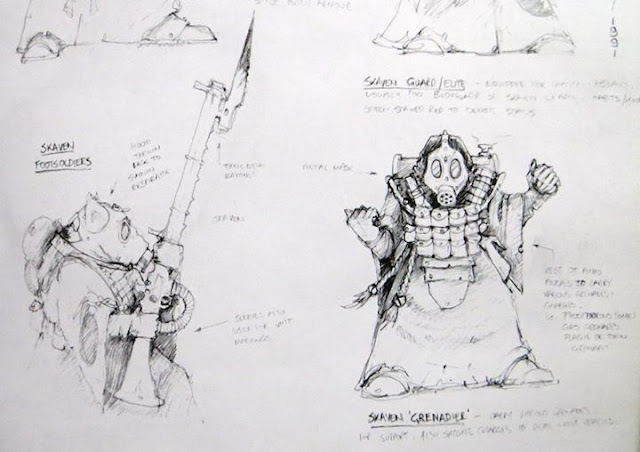 The greyseer with warplock pistol only got a pair of combat shoes (like most of the skaven of the band actually) and a bionic eye (because it's the easy/lazy way to make things sci-fi really).
I have to say the globadier next to him has got to be one of the most excellent models I've ever painted. It's an humble one for sure but it displays the genius of its creator really, everything in the pose and details, the way it works with the 2 piece mould constraints... I just love it. 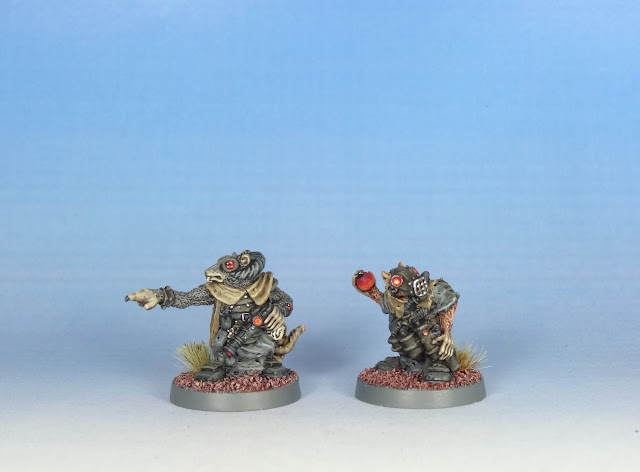 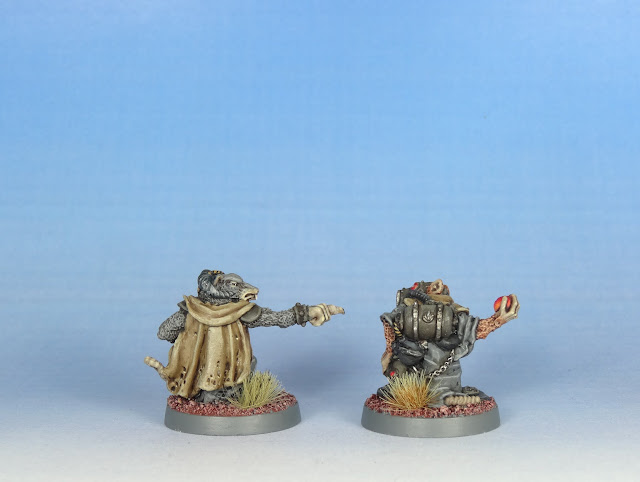 Next (those actually were the first 2 I converted) were the best equiped (after the captain) of the bunch : 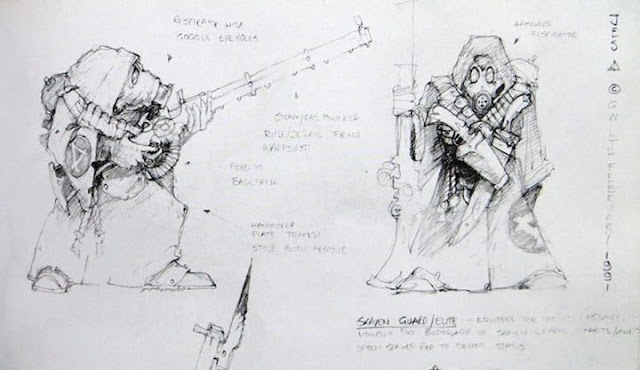 The guy on the left is based on one of the most famous leaders so I tried to stay faithful to the sculpt and only swapped the halberd for a power axe. Apart from new boots and a WW1 gas mask, there wasn't much more modifications on this one (he's got to be the most converted of the bunch).
The guy on the right only got shoes but the pose and equipment was already too good to be altered really. 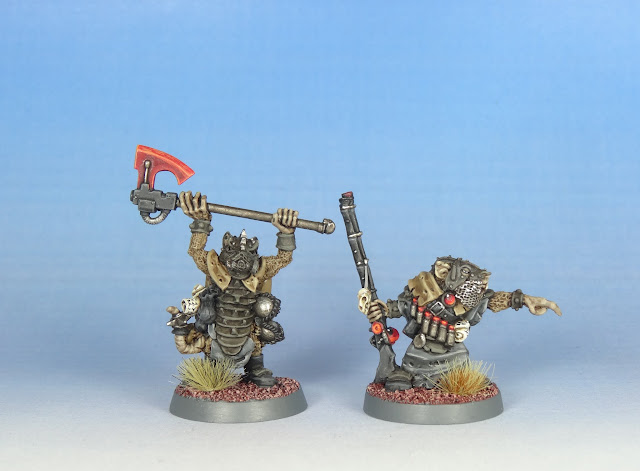 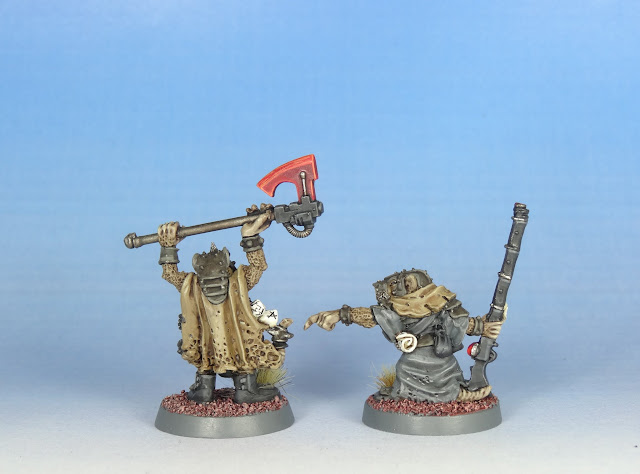 The warpfire thrower and his little companion are excellent models and there was no chance I would leave them aside really. The gun bearer is a variant of the greyseer actually and the slave is just another of those wonderful Goodwin models. Once again, it's playing with the 2 piece moulds constraints and offers a really cool pose. So nice to see even slaves got the best of Jes for this range.
I altered the mask to add a gas mask part I had from somewhere and I linked both models with some bass string (should have used green stuff rolls.
Oh and while I'm at it : DO NOT PAINT MODELS ATTACHED TO ONE BASE.

Do yourself a favour. 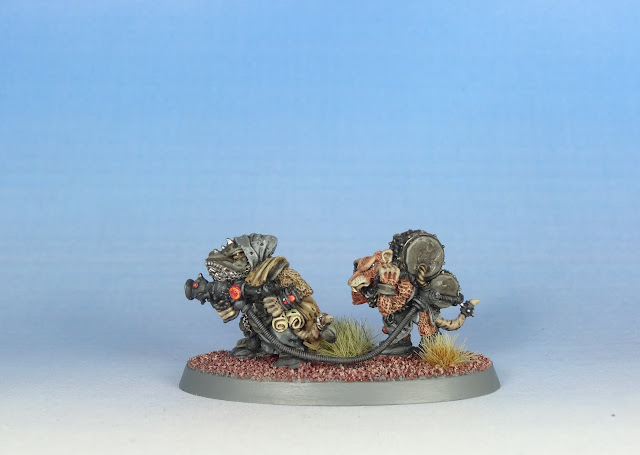 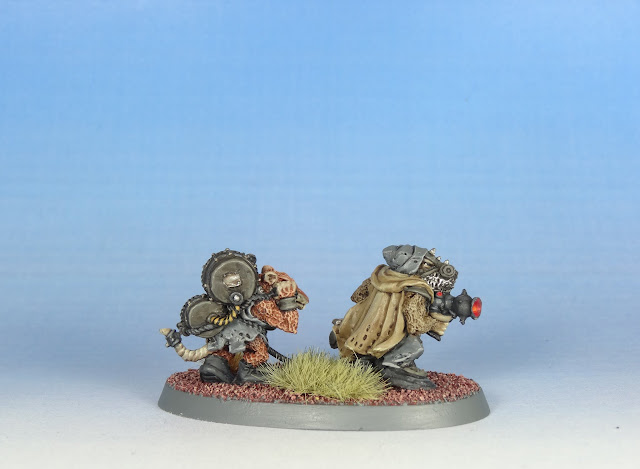 AAAAaahhh, my favourite ! The rat-ogre is just insanely great. I love that model. you can see it's lacking a tail (rat ogres got one after that in 4th ed while losing much of their body hair) and this particular conversion had been in the back of my mind for some time. Well I actually wanted to give him retro running shoes like Reeboks and maybe some bling but I followed advice from friends and didn't overdo it.
I finally just sculpted him a sleeveless shirt and a pair of shorts to replace his loinclothe. 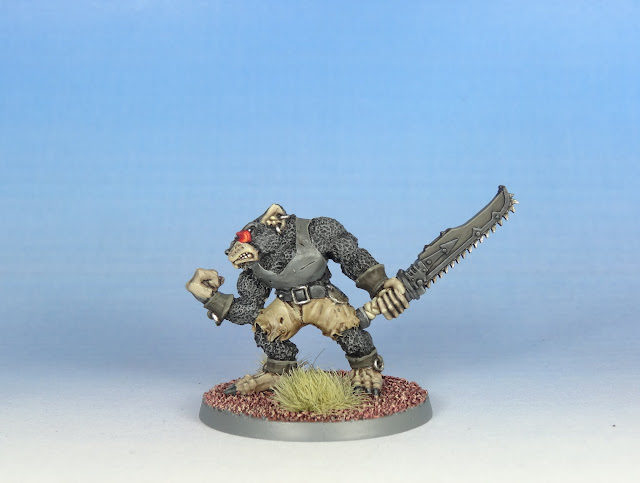 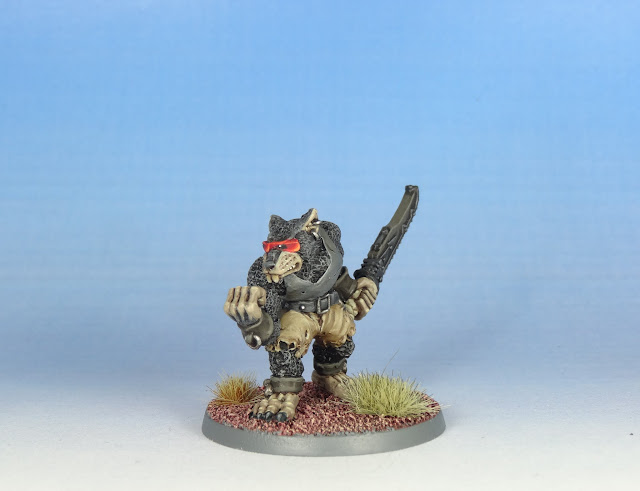 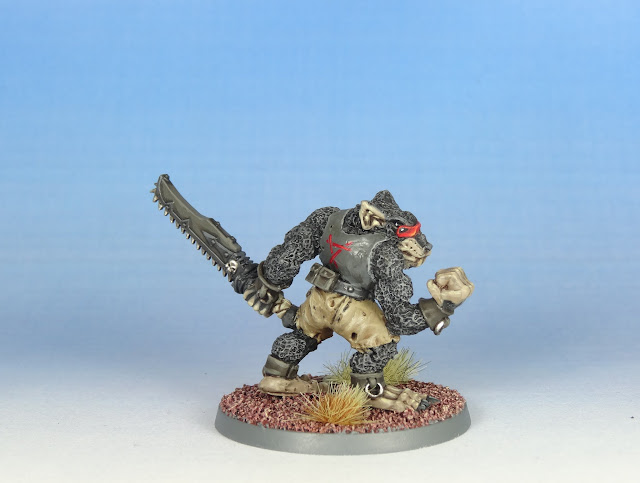 Lastly, here are some Necromunda rats I got a few days before finishing the band so I added them to the crew. I think they couldn't be better anywhere else really (despite the obvious style differences between Trish's and Jes' styles). 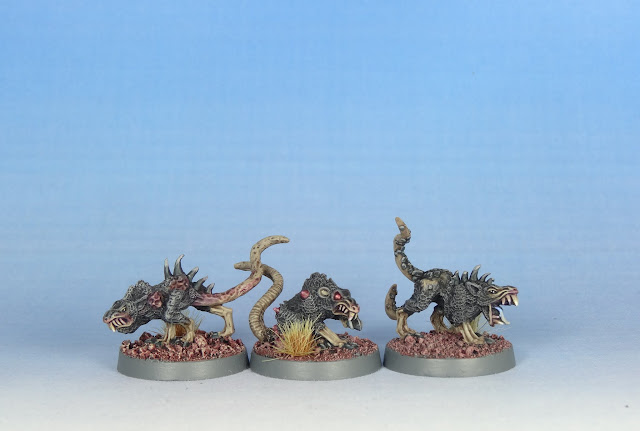 So this is it, 12 models at once and a full warband to play. It's a lot different from how I envisionned them at the start but I have to say I like them a lot. I hope you people will like them as well and will find them Sci-fi enough. I have to say I do like the "on the edge" look of them.

EDIT : I wanted to share that with you but had to be reminded, if you ever feel like knowing a bit more about space skaven, check this excellent post !

So what's coming next ? Well I got myself into serious trouble...
You'll see what I mean...
Publié par Asslessman