So with a little delay, here's how I finally got to play a bit of Frostgrave at Knavecon e few days ago !
I've already talked about my warband HERE so I won't get any further on the subject but since I've managed to play 3 games in a row I thought I'd share my impressions even though those impressions were obscured by the fact I maanged to catch flu on this very day... 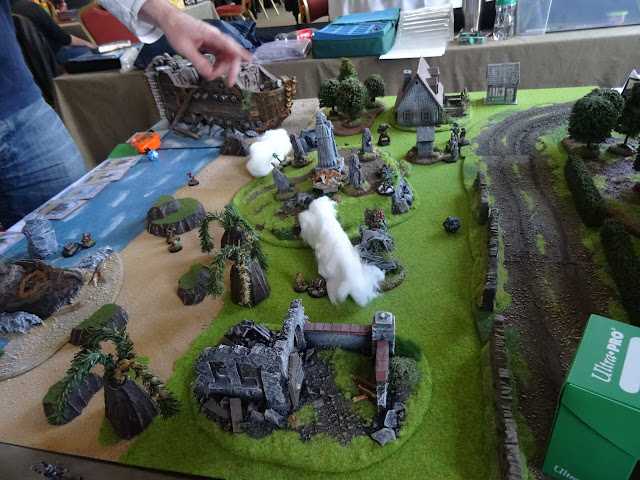 First game I had was against Chris from Antipixi's hobby blog. We know each other quite well know and getting my first game with him was a relief as he's not only a nic eplayer but one that learns and teaches rules rapidly.
That meant I had to face his warband of dwarves and gnomes as a starter !

The scenario we drew was "genie in the bottle" which meant that whoever took a treasure took the risk of awakening a strange creature (which would bring plenty of XP though). 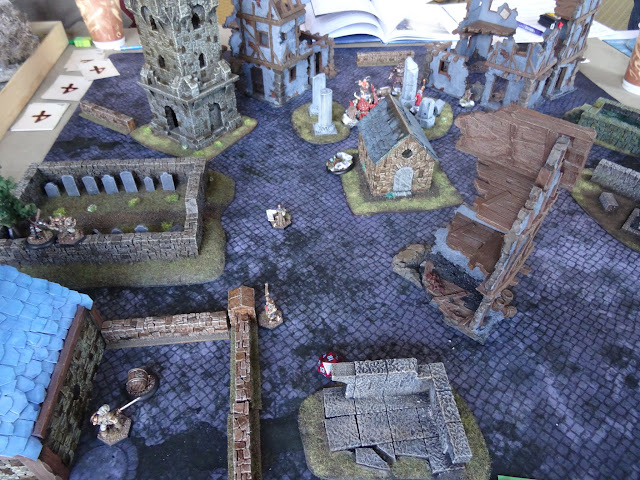 Funny thing is, I had no idea how to deply for my first game sinc eI didn't know how I'd want to use the group activations, so I roughly made 3 groups to keep some company for both my wizard and apprentice (both seperated).
I opted for that technique to secure as many tokens as I could right from the start which proved quite efficient.

Chris got to unleash the demon from on of his treasures though, meaning he could potentially score some nice XP if he managed to take the creature down ! 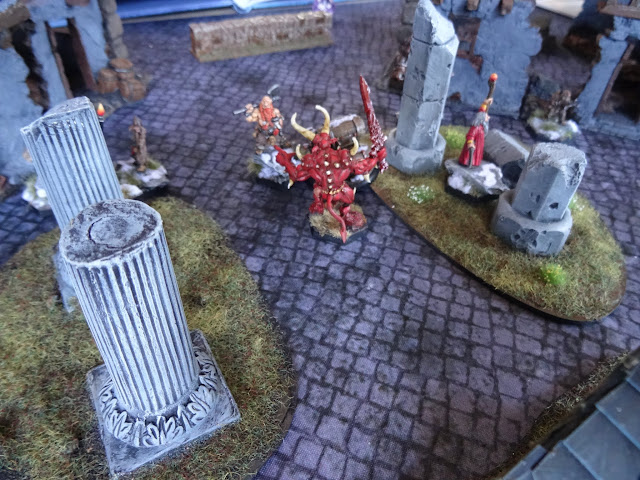 With the men at arms returning to the base with treasures, my apprentice felt a bit lonely and tried to play a game of "hide and snipe". He wasn't particularly efficient at it since most of the elementalist spells have high casting values hich often prove hard for his poor starting skills... 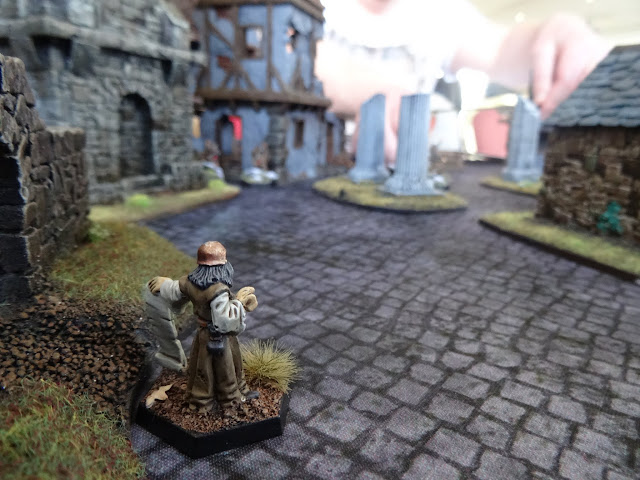 The wizard was far much better and "hide and snipe" and he must have sent a truck load of elemental balls and bolts ! 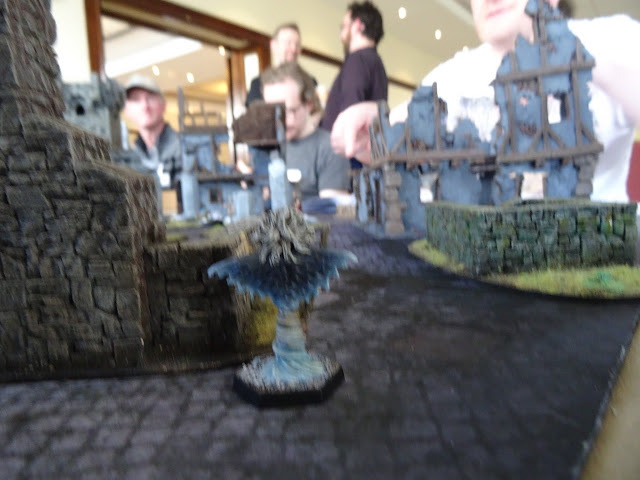 The game ended in a draw with 3 tokens each and roughly equal XP, though I did get to take more of his men down since he had to fight the demon for a good part of the game.

My 2nd game was against Jon/Axiom from Magpie and old lead at the head of his magnificent warband of Pan Tangians : 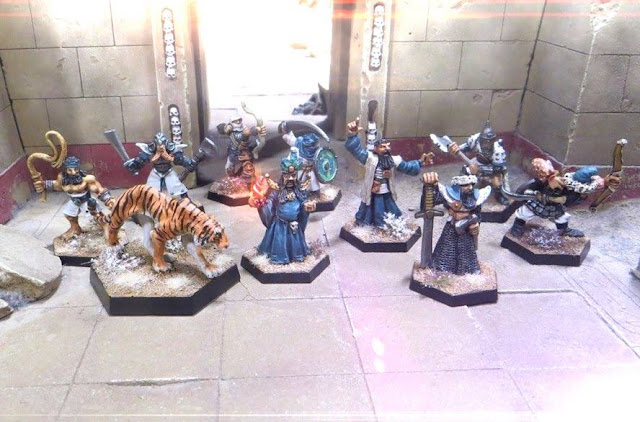 In this scenario, the tokens were replaced by statues we had to fight in order to get the treasure. The fever from the flu must have got to my head at this point as I was totally unfocused and kept doing stupid things.
I was eager to test my newly aquired templar and treasure hunter though since most of my force consisted in men at arms so far. 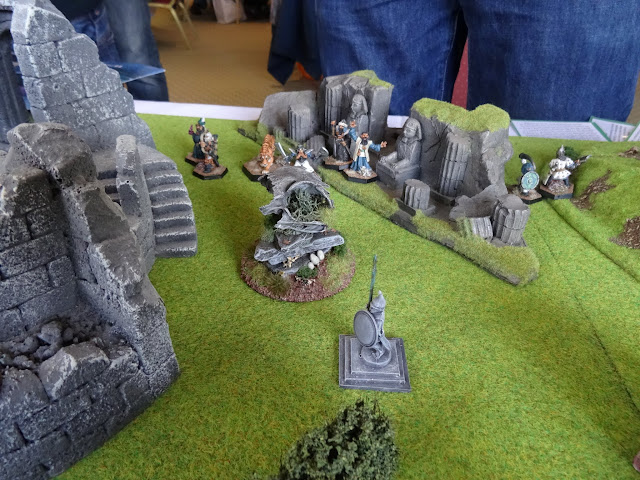 The wizard accompanied by some guards went in town to get the furthest treasures... 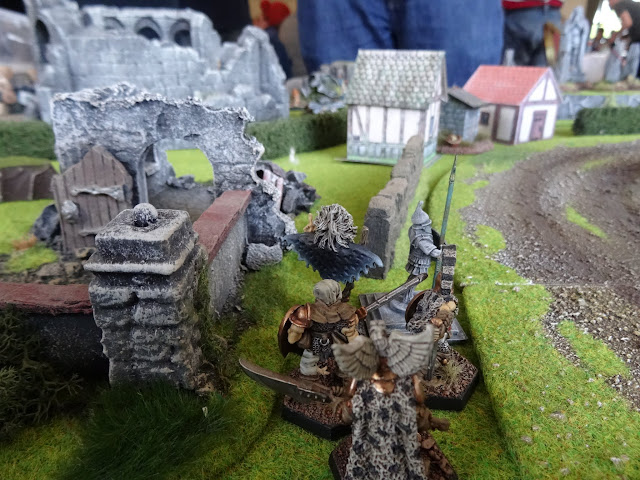 The wizard on the other side kept using a very annoying spell : "wall" which made me change plans. I very stupidly misevaluated the prowess of the templar though and the men started to fall on my side at an alarming rate... 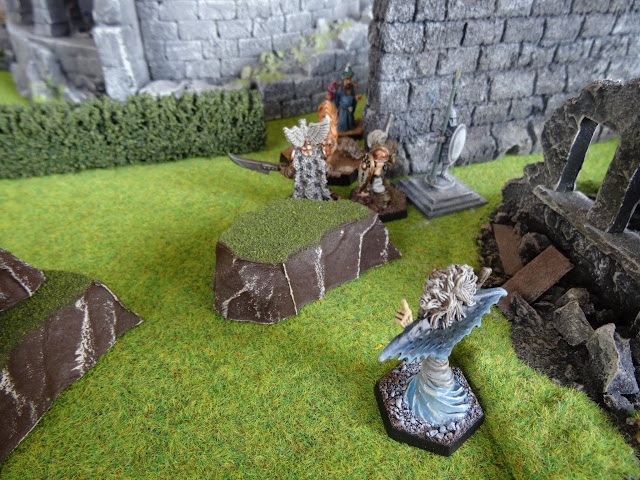 The game ended up with me scoring 2 treasures only and every member of the team falling.
The post game sequence revealed that Gladius didn't make it and his comrades made a quick but moving ceremony in his honour.
The day after that, they hired his twin brother who was conviniently called Gladius too. 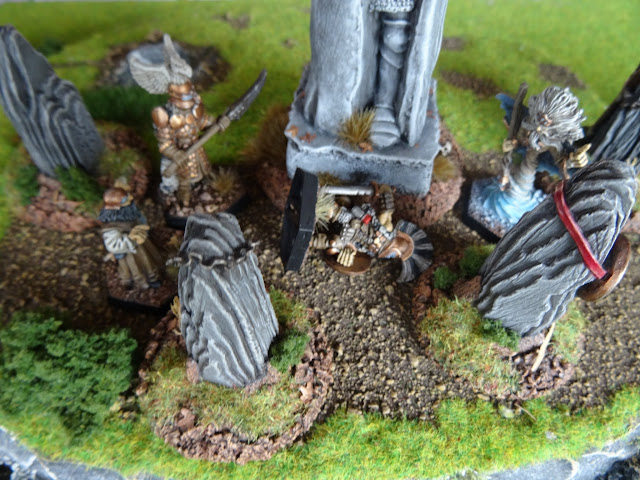 Last game of all a was a 4 players game with random orders each turn (drawn with cards). My opponents would be Skip (whose army I forgot to photograph, Sean aka theottovonbismark and his delicious frogs and Colin aka the Whiskey Priest with his old worders.

My deployment in one corner of the table made me want to focus on a single adversary. Unfortunately for Colin, he was the one with the most treasure I'd want to steal on his side... 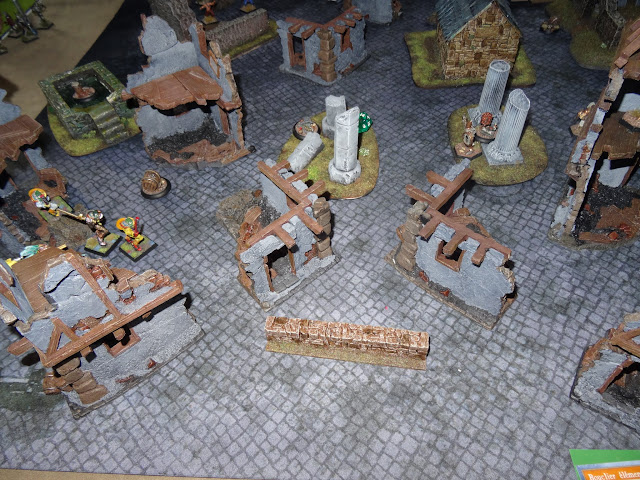 With a couple of games behind me, I had a better idea of how I liked to do things in this game. A mixture of opportunism helpd with spells like "jump" or fleet feet" was a good way to get treasures rapidly and a bit spoonfull of aggresion in the form of elemental balls and bolts to either take down masses or snipe the other spell casters...

Can't say I was over impressed by the prowess of my archer but he did have a psychological weight so I can't say he was useless, just look at him securing the way for his treasure hunter friend coming back with a treasure. 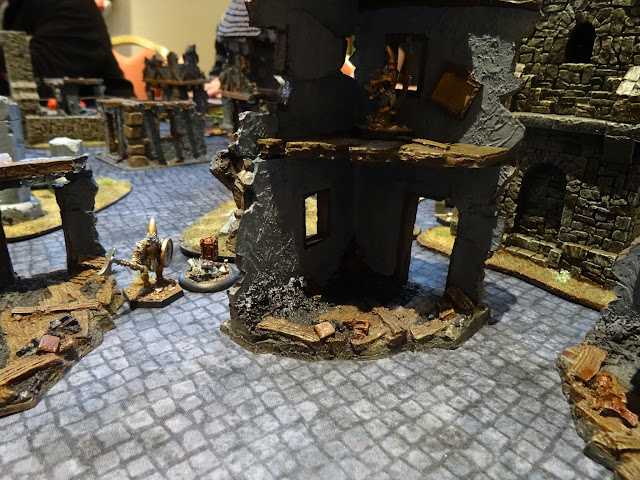 It was great fun seeing 2 players fight each other on the table, knowing I'd probably not encounter any during the whole game ! 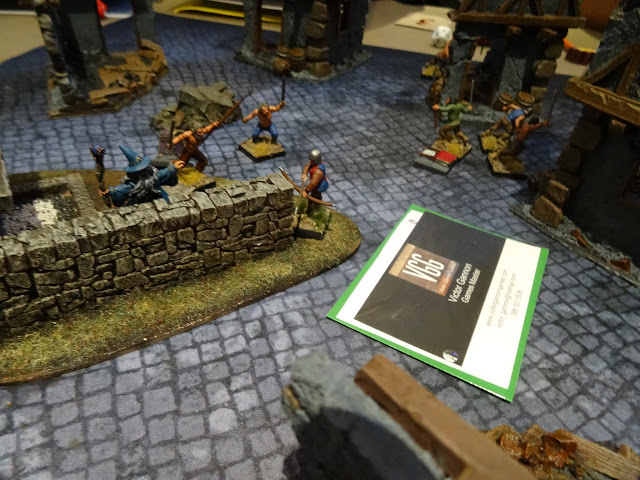 I just tried to use "jump" as much as I could to go send men at arms grab treasures in Colin's zone. The cemetary was a good place to hide and steal. 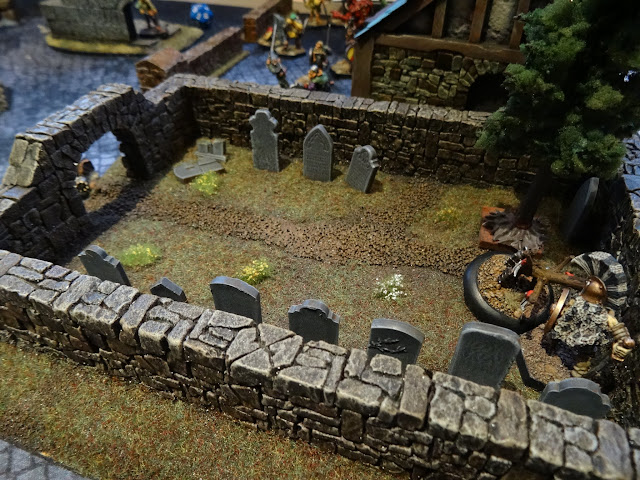 Meanwhile, the apprentice was trying to emulate his master's work by sending other members to grab treasures as well. Cast "Jump", cover with "elemental balls" then repeat... 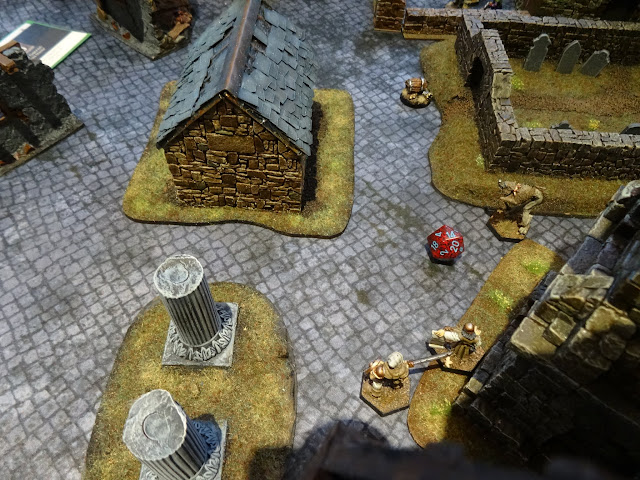 Knowing I had secured 4 treasures and I had managed to take the apprentice down, my wizard got cocky and climbed up the wall of the cemetary to snipe his opponent with an "elemental bolt". at that point, I had boosted my wizard and spells so this one worked just fine and the tear in Colin's eye almost broke my cold and sick heart. 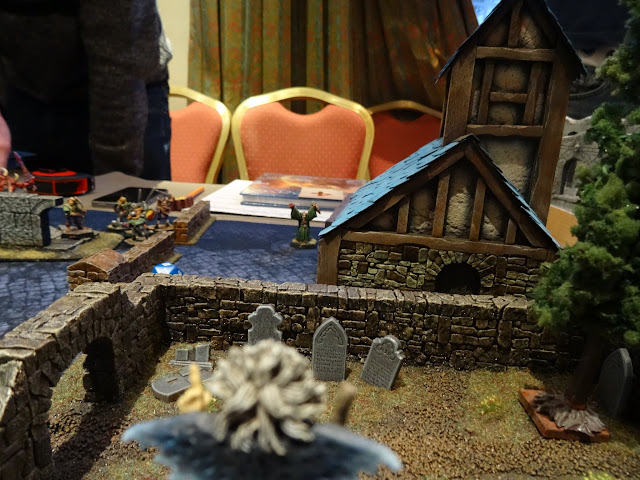 So what did I learn about Frostgrave in just 3 games :

- I want to play more of it and I'd like to play other schools of magic just fo rfun. I've chosen the elemetalist school for my wizard because let's face it it's the one that fits the looks of him the best but there might be  more to play with.


- I feel a bit frustrated by the fact everything revolves around the wizard so you don't get attached to other crew members as you can in Mordheim for example. That does mean the game is far quicker and simpler so you'll probably play 3 games of Frostgrave where you 'll get 2 of Mordheim. The objectives aren't as varied though.

- I've had the impression some spells were really popular and I know I've only played half of mine with a heavy focus on "jump" (I can definitely see why this ine has such limitations, it'd be a game breaker otherwise) and elemental balls and bolts. I've greatly appreciated telekynesis, so that's one I'd like one of my wizards to have for sure.

-I'm still unsure about wether keeping Jack of all trades like men at arms or going with a more specialised force. For some reason, FG is th ekind of game where I could see myslef trying to optimise my list (which really isn't in my habbits or usual interests really).

- Frostgrave is for now an very easily avialble game to find partners for and building a warband is not extremely difficult. With a few games of the basic rulebook behind me, I'm willing to have a try at the supplements now and I'll keep tha tin mind when building the next bands.

I'll have new bands to try in the near future so I'll try to keep all that in mind to find a new way to play compared to what I did with the champions of Law this time.
Publié par Asslessman