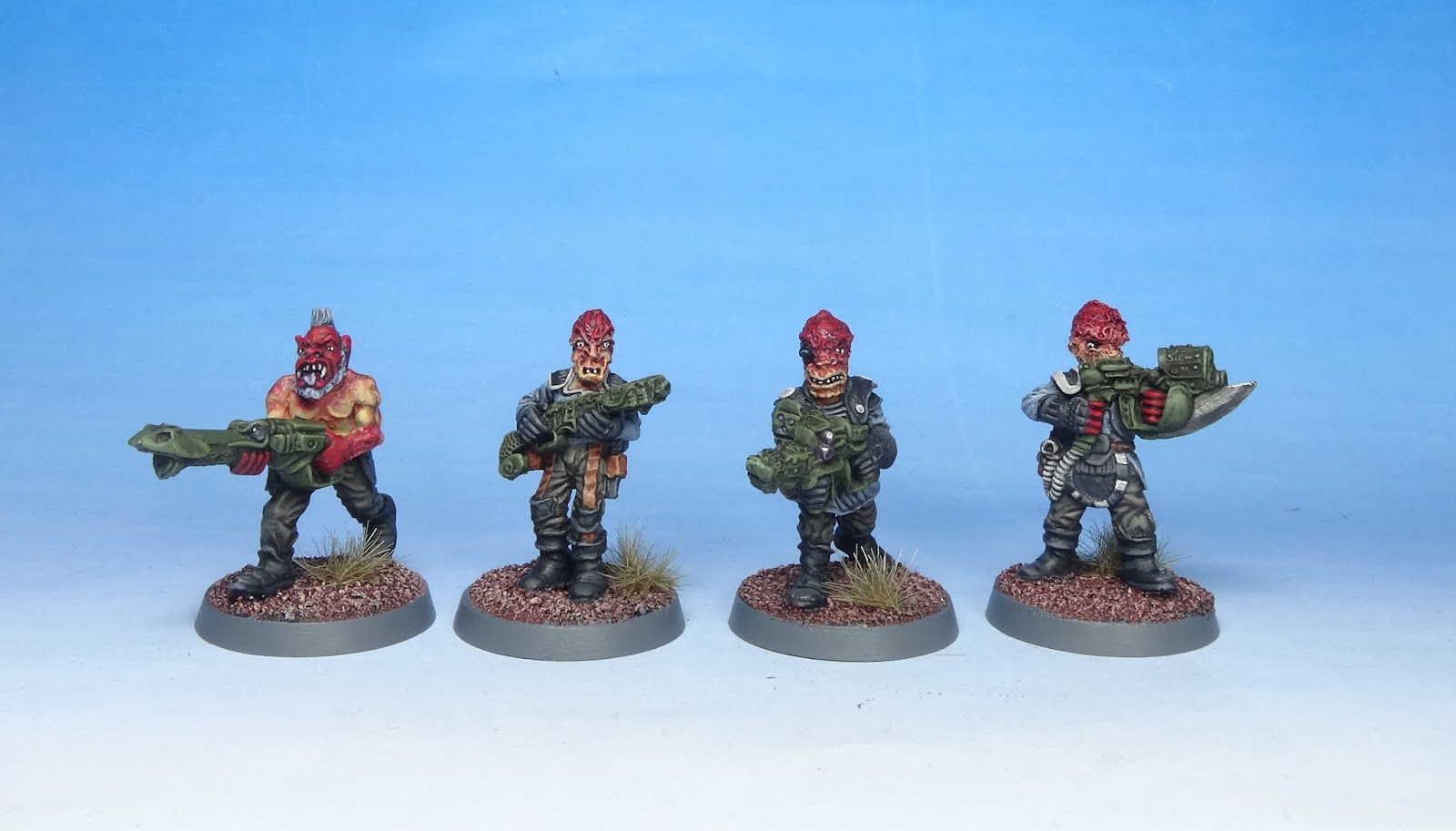 At last I finished some models !


These have somehow jumped to the top of the paintqueue (well, greatly thanks to The one for sending me Captain Dunbar as a gesture of kindness) and as always with Bob Olley's sculpts, I just let the models paint themself without worrying too much.
I've already told you how I strongly believe you only truly know a model once you've painted it, well that is even more true with Bob Olley's sculpt. I called it the "Bob Olley effect" earlier, you may not like what the sculpt look like (I've been like that a lot in my earlier days), but the minute I painted one (I was kinda forced), I realised it was a tremendous pleasure to work with his models and I have come to be a huge fan of his work. I just love sculptors who work for painters. Just like Jes Goodwin (my own personnal favourite), Bob is a very painter friendly kind of sculptor and that's what makes his work so great and favoured.

But let me tell you about those particular models. They are Iron claw pirates dating from the time when Bob had his own studio producing models for Games Workshop (just like the Morrissons had the Marauder studio).

There's a full range of pirates to pick from, all particularly characterful : 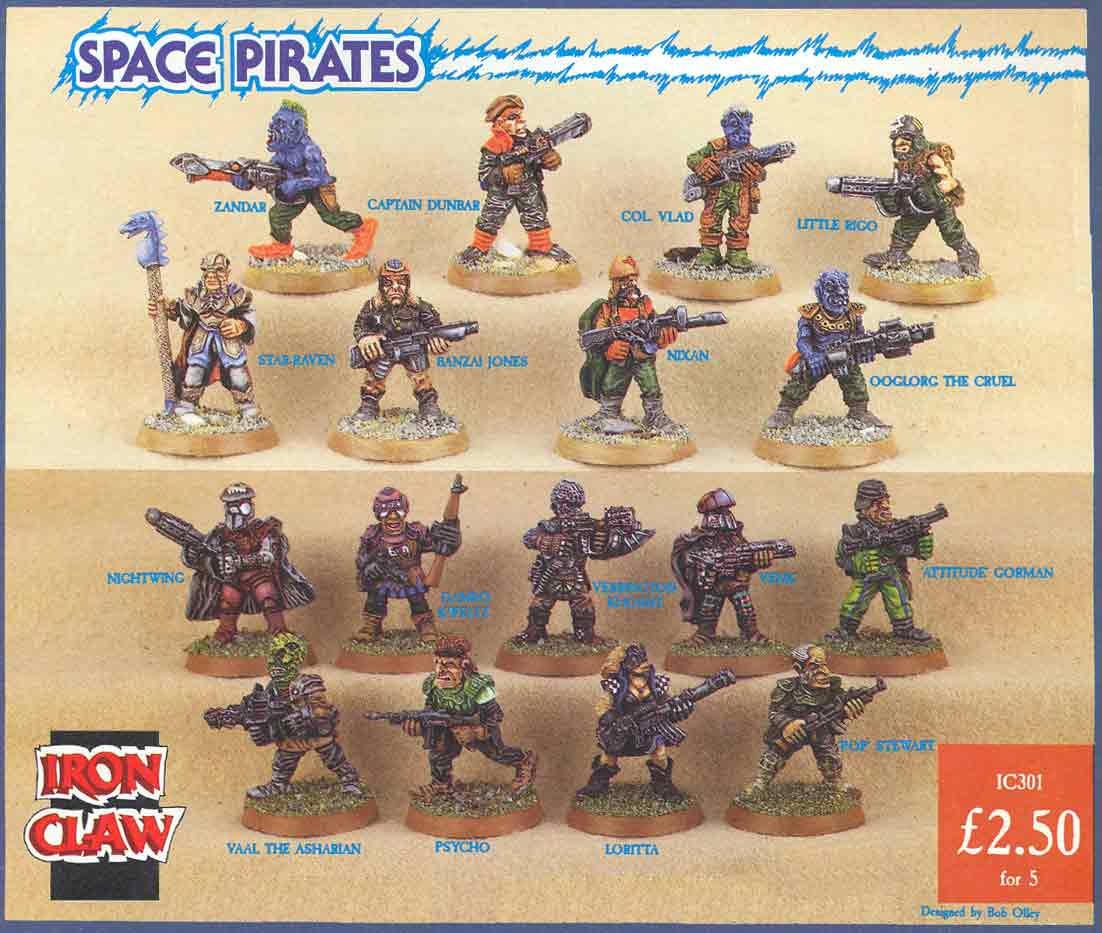 I have most of this range except maybe 3 of 4  and I expect to paint the full set in due time. Looking at the picture above, I just feel frustrated to not have collected Ooglorg the cruel yet as it would have made a set of 5 aliens which would have been pretty cool but anyway... (if any of you feels like trading him, I'm your man)

As you can see, those models all bear the distinctive style of Bob with organic shaped weapons, very detailed faces (you may not be able to spot them but if you've ever handled one of these you surely know every single detail like eye lids and nose hair are sculpted), wrinkles and wrinkles over wrinkles and guns you don't know what to count as.

You may have noticed I didn't place the models in a random way. you can clearly see the one on the left is far more humanoid than his colleague on the far right. This is because I've decided to treat them as mutants. But not the chaotic sort, no, just like my Rad chimera, I want these guys to be the offspring of radiations and fallout of some nuclear holocaust. The further you get to the right, the more the mutant and his ancestors have been exposed to radiations. 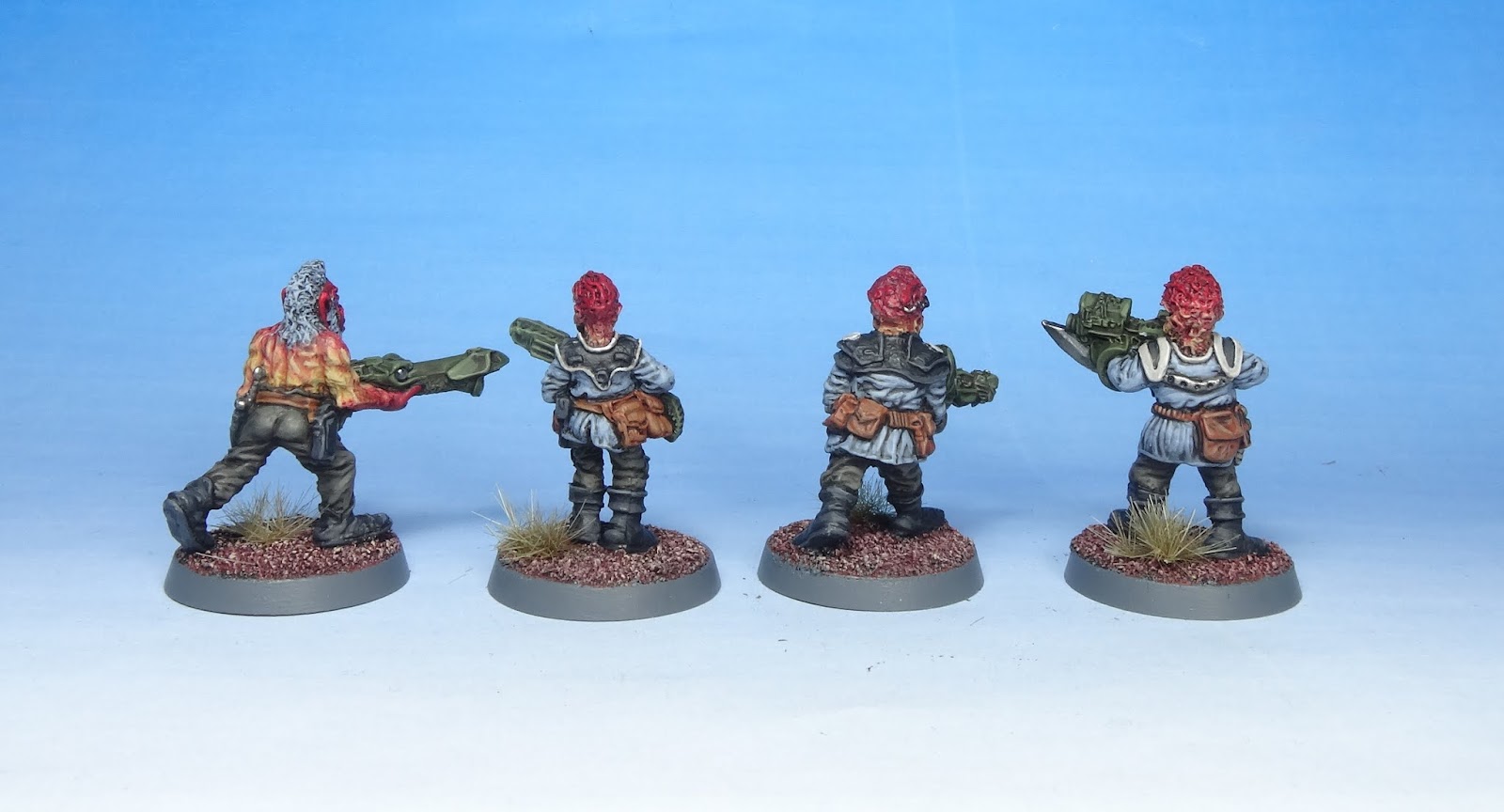 That was a way to unite all those models by giving them a similar paintjob to tie them a little. I voluntarily left some remnants of "human" pink skin and coloured red the overgrown or most mutated parts (the heads in most cases).

Once I had that idea, it was only natural to try and link those models to the Space minotaur I had painted earlier (sculpted by the most excellent Diego Serrate who is about to unleash a wave of new exquisite models...) and to my Rad chimera.

Being such the fallout fanboy that I am, I imagine that these mutants have found some sort of military complex where they could equip themselves :


Colour wise, that meant I kept the camo green weapons and black pieces of armour and that the mutated parts of the skin were going to be red. This was accomplished by painting the parts in a natural flesh tone and by blending the red parts with washes first and then glazes.

The one on which I could really play with blendings was Jhetfield below. The transition between the mutated parts and the semi-normal ones was achieved with very light red glazes over the natural fleshtone and that really tought me a lot. I will try to apply these kind of techniques a bit more in the future. Though a little time consuming, I had great pleasure doing it and I'm pretty sure I'll learn how to apply this faster in time.
Jhetfield is the merry guy of the group although his bad temper is as legendary as his poor jokes. he has this distinctive way to end each word with "-AH !" and by using "yeah" a lot... Apart form that he enjoys flaming everything with his flamer he has decorated into the shape of a dragon (although most his friends tend to laugh at it looking more like a horse).


The second one is Laural Baccen nicknamed "handsome" by his friends if the troop. Though he is the most level-headed guy of the troop, he is often mistook for the most violent one because of his weird teeth and his "look". Of all the mutants in the Mariposa facility, he is the one who has had the most success in using ancient technology and it appears the mutations have altered his brain capacities beyond those of a mere mortal. 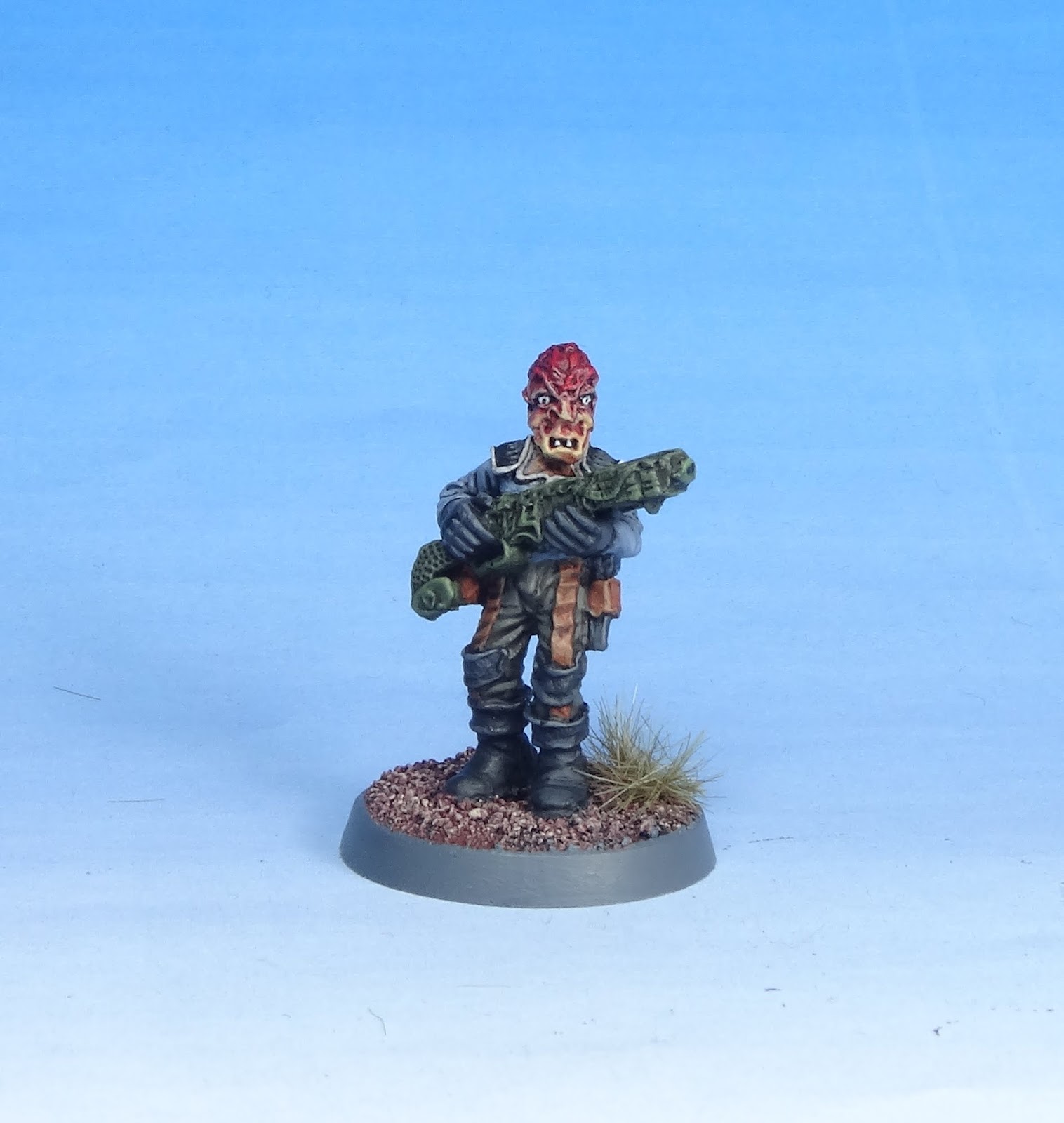 Joz "Papa" Wrink is perhaps the most sentimental of the group. you will always find him trying to shield his comrades in action times or trying to look after his companions in times of peace. He is testing a peculiar weapon he doesn't truly master and which gives him hard time whenever he uses it. Sometimes the weapon will act like a meltagun, but sometimes it will act like a stapler, a glue gun or a shuriken catapult. Joz, doesn't want to waste Laural's time though and he keeps trying to figure out how to handle that weapon, sometimes causing greater threats to his own side...

His comrades like to laugh at him for looking a bit too much like an old genestealer (it has toi be said that the group had had several encounters with Genestealer cults but with no threats on either parts. The genestealers seem to avoid creatures with such unstable genestock and the mutants tend to leave the cultits attract attention to save their own asses). 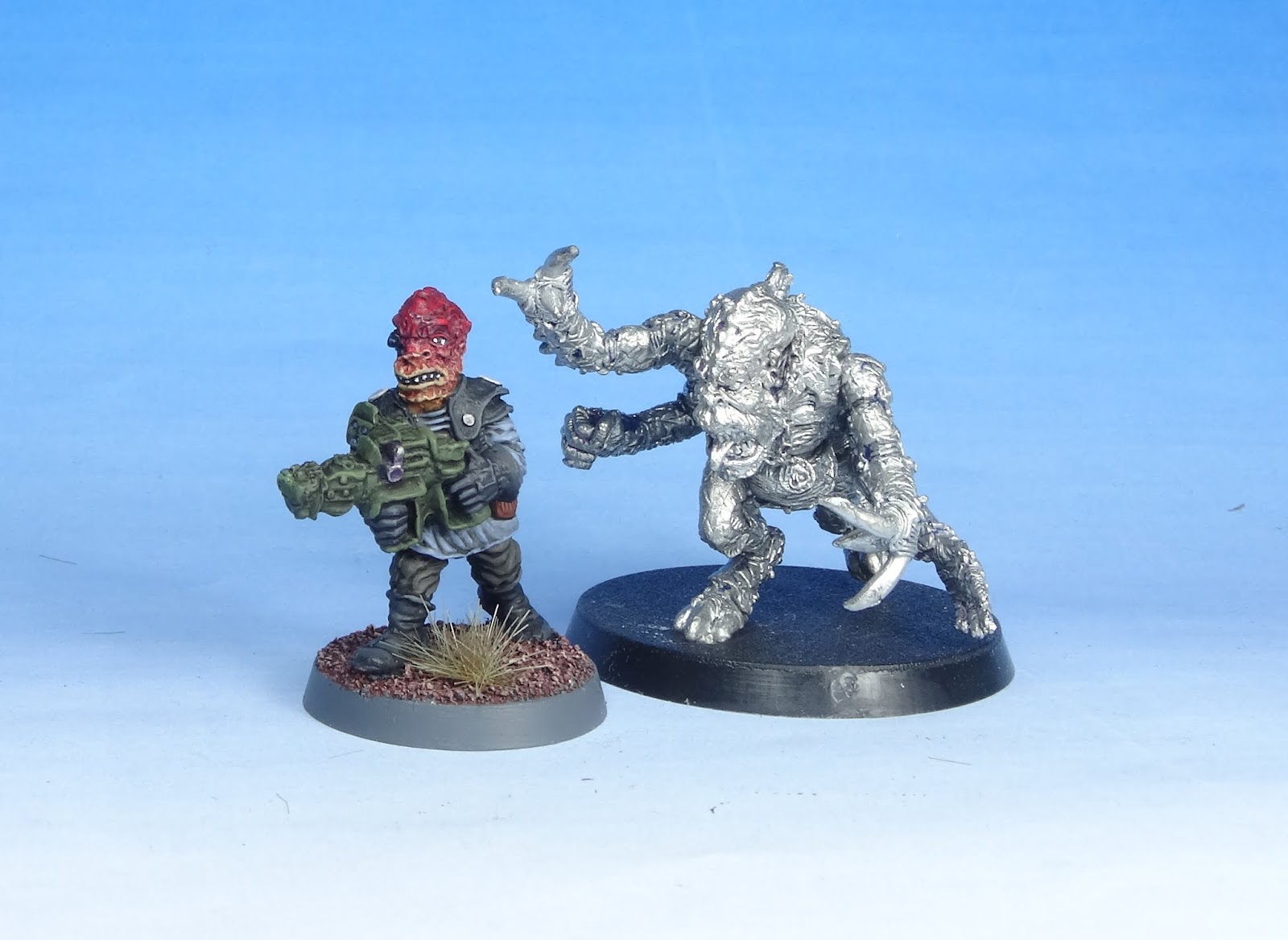 Dathang below is the most altered mutant form the group and his ancestors have been far from human standards for generations now. This leads him to thinking everything is perfectly normal and in fact, he just happens to find the less mutated ones of the group like Jhetfield or Laural to be the weird and ugly ones...
So what's it gonna be next time ? Very probably some updated Realm of Chaos Demons and other things of the sort but who knows what other silly things I might get to the top of the queue before that ? (I don't)