Warhammer 40k which was already strongly Roleplay oriented at the start was developped with Space Hulk, Confrontation, the Epic system, Necromunda, Inquisitor,...

One of the games I'd like to talk about today is Space Fleet : Space Fleet was published in July 1991 by Games Workshop and designed by Jervis Johnson and Andy Jones. It was released as a board game for about 2 to 4 young players. I insist on young players because the rulebook given with the game is actually printed on just 2 A4 sheets (we'll develop on that a bit later.)  Space fleet was not the first step into space ship combat for Citadel who had previously released models for Star Cruisers. 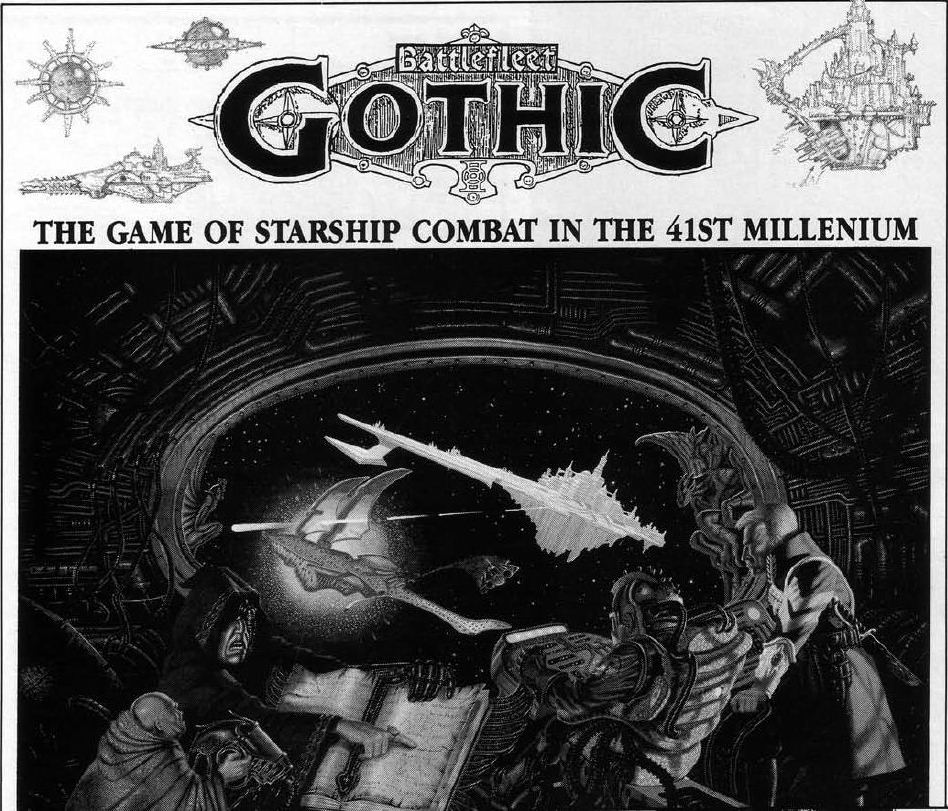 First thing you can notice is the name of the game was originally "Battlefleet gothic", that's intersting since in 1999, Games Workshop released a new version of the game called precisely "Battlefleet gothic".
Another intersting detail about the sketch presented is that while it obviously became the basis for the box cover, the background is actually different from the final version (you can see below). The revised version shows more ships tough those displayed are still the 2 types available in the box and one could also point that while on the first version, the number of ship is even with the eldar ship dodging an attack, the second version shows a clear superiority of the imperial fleet both in numbers and in the fact the eldar ships is getting a direct shot. 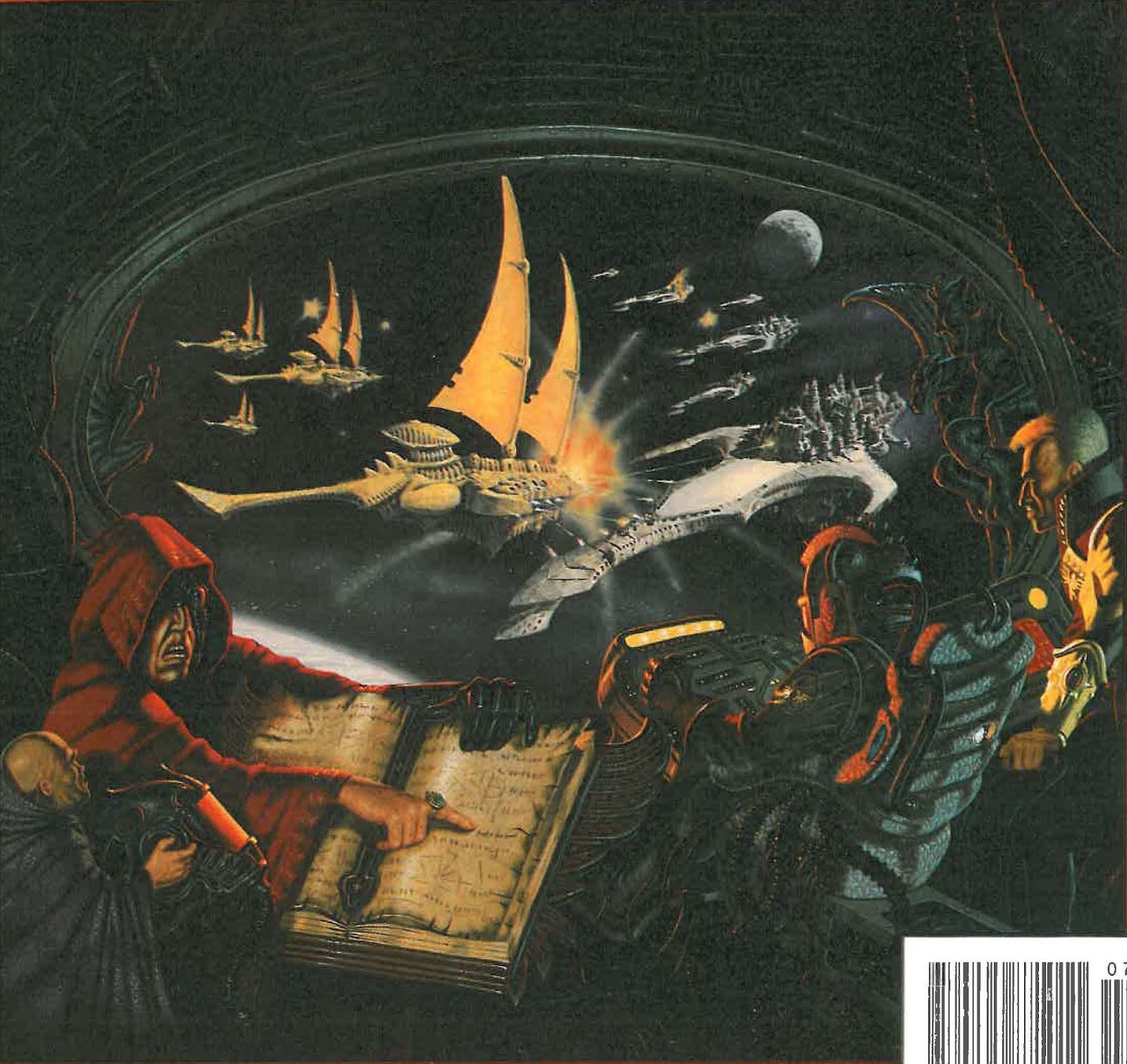 The previews show us illustrations by Tony Hough (if I'm correct) to give the ambiance. I particularly like the one below because you don't get to se that many children in 40k illustrations and you don't get to see smiling bionic dads that often either. (that just reminds us that in the grim darklness of the far future there has not always been only war...) 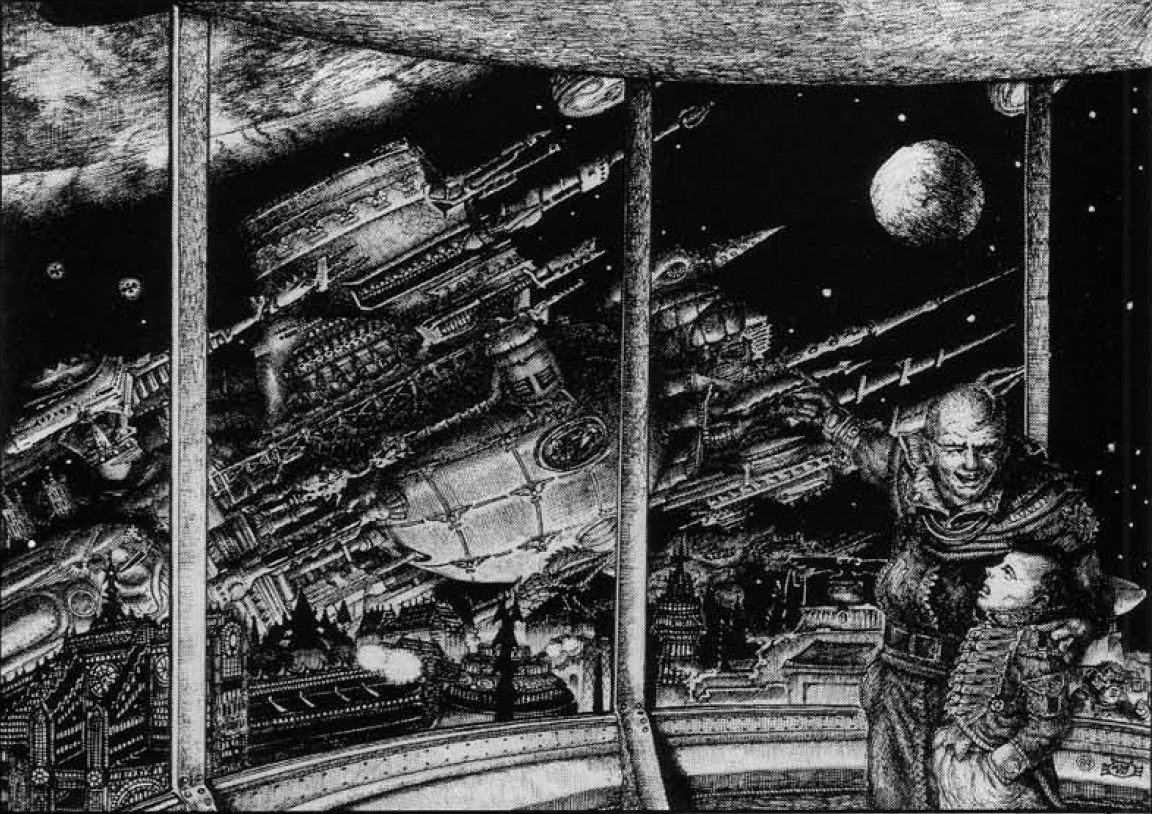 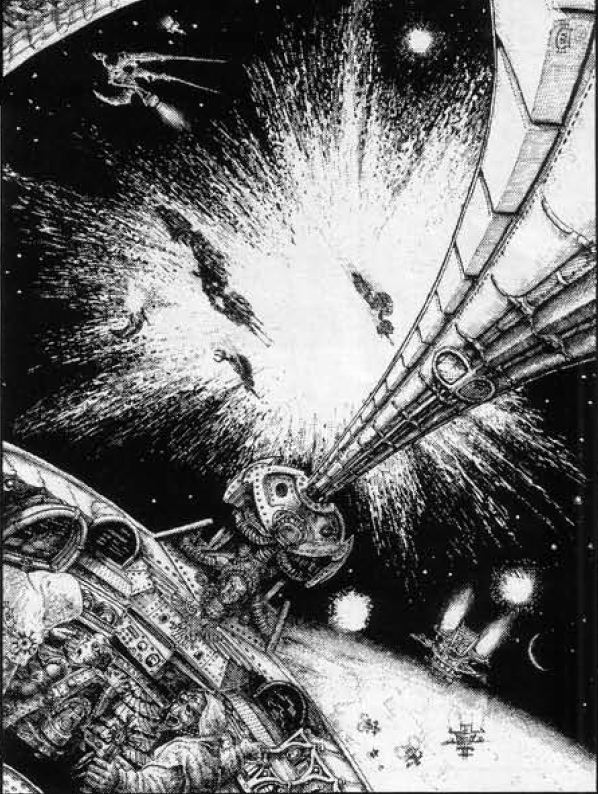 On top of that, you get to see many of Jes Goodwin's renowned sketches for ships and general designs : 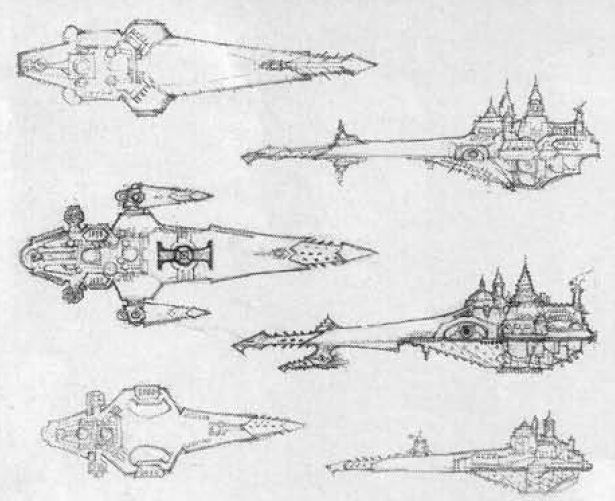 ... but also for characters associated to the game. Now this is great to see that the attention to detail was pushed as far as to imagine people in the ships for a space ship game (that part could have easily left aside for cost/convenience/timing issues). As usual, Jeremy's work is defining and nobody would object to pasting these concepts directly into modern 40k as they are now. 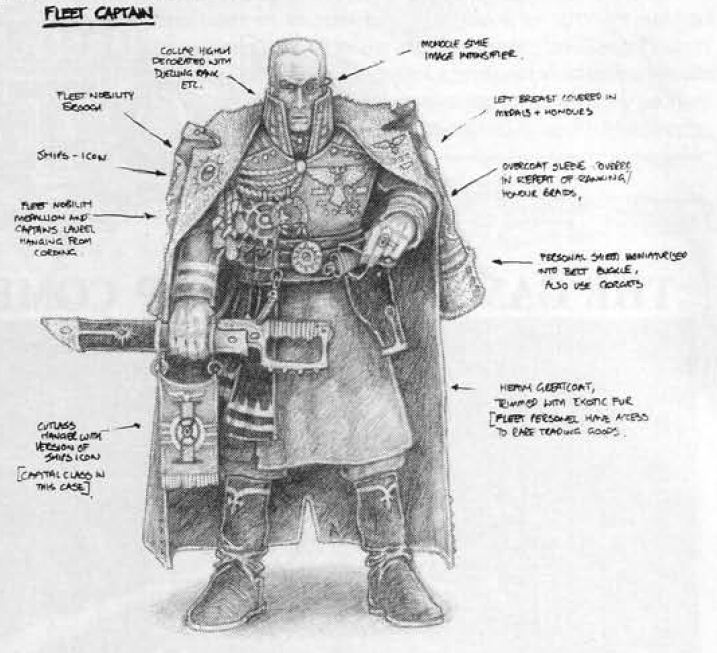 and it seems nobody ever did since you can actually see that the fleet officer sold todays for the Imperial guard AKA Astra militarum is not that far from the concept published in 1989 (only real difference is the absence of the great coat) : You also get to see sketches for Fleet officers but it seems that this concept never really made it into a sculpt. 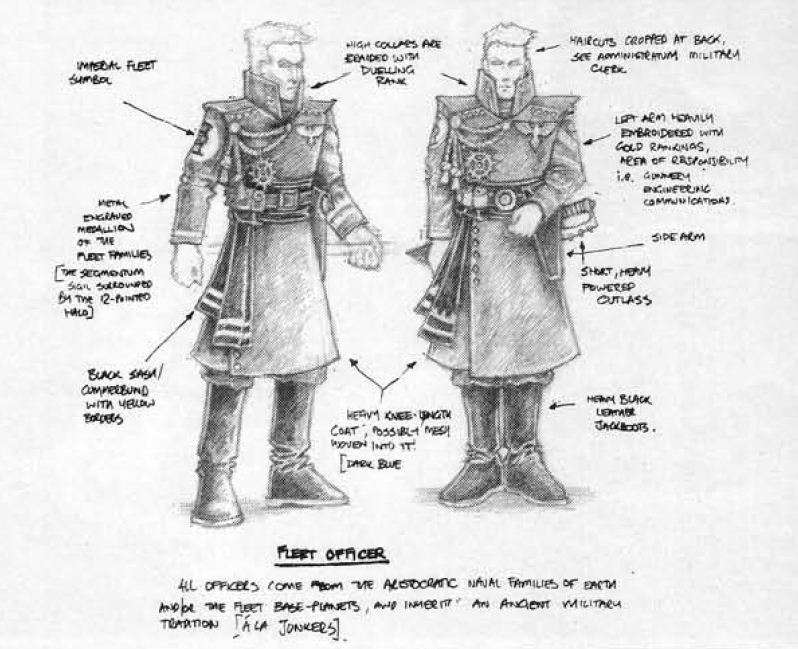 And then the fleet crewmen with slight variations depending on the roles they have (can't think of a more impractical working suit than the one on the right...) : 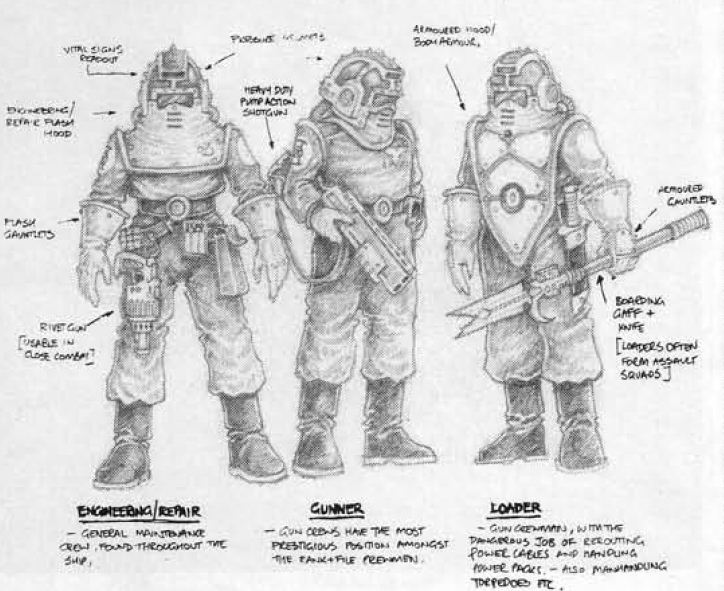 Though those didn't make it into putty (as far as I know), the models released for the Titan crew would have been just perfect to embody those characters :


Amongst the illustrations, you can also pick this charming discusison between 2 inquisitor/rogue trader types of characters, both wearing heavy power suits with a touch of space suit : 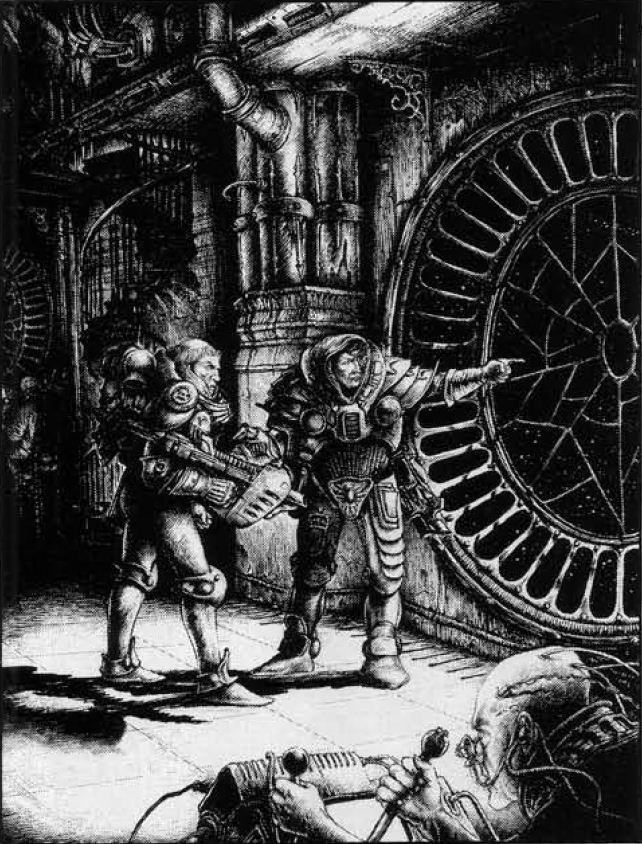 You can see the models it inspired (or was inspired by) below. Funny thing is that the one on the left even has some osrt of jet propellers attached to his legs which tends to say those imperial agents were meant for space.

I wonder if those models were imagined as part of a boarding game (like PSace hulk or SPace crusade) or for some ship based skirmish (thinking about confrontation which was released at about the same time)...

Anyway... since the game box contained two sides, namely imperium and eldars, Jes Goodwin had no choice but to add some eldar sketches as well (being the source of space eldar he is). It goes without saying those are a treat for the eyes of those who like me any many others love Goodwin's work. 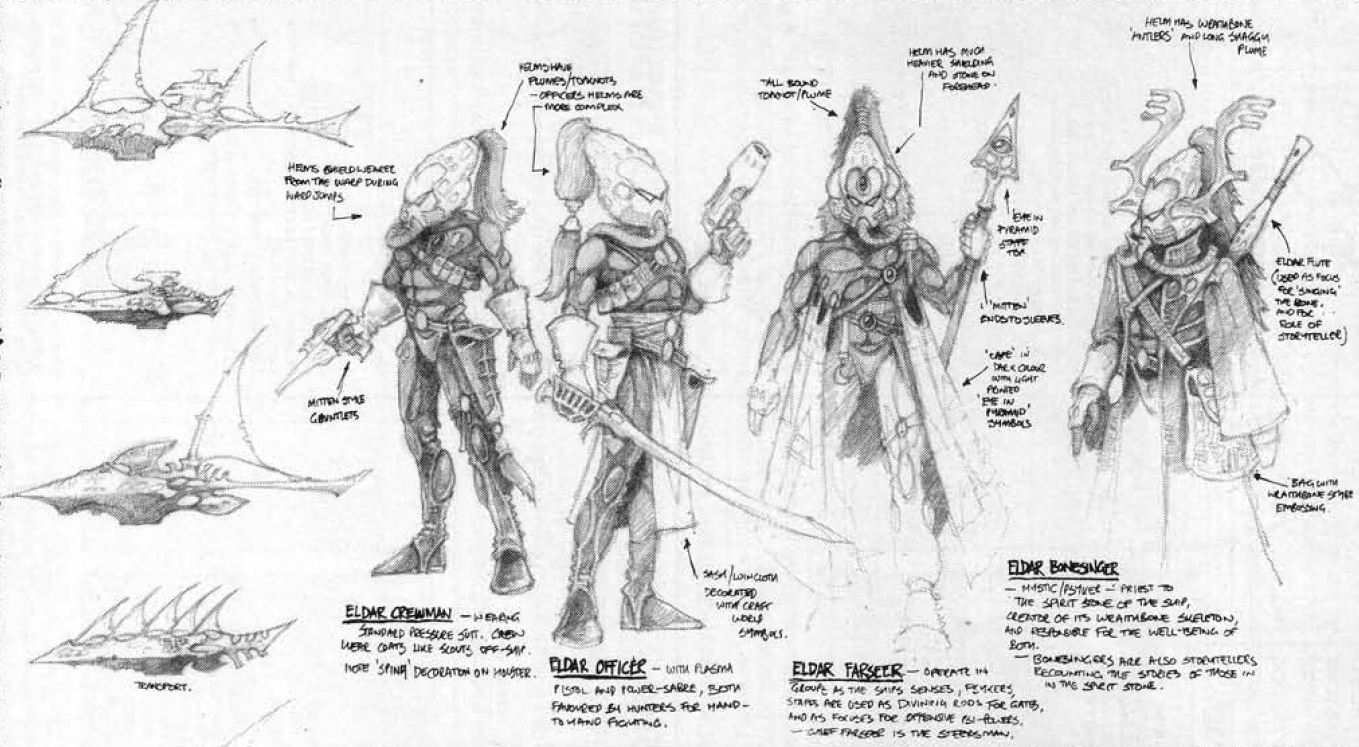 What really caught my eye though with my renewed interest for Space fleet was the last picture showing the model of an eldar ship (Just count the sails, 1, 2, 3...) :

And now try and find that same model amongst those released :

I'm missing my ship with 3 sails ! The body is not even the same as the wraithsip's !

I'm not done with Space fleet as I'd like to talk a bit about the models and rules too. This game was one of those I really enjoyed in my youth for its simplicity and finding my box of it in the garage a few months back really woke my interest for it.
I'l lleave you with the mistery of the missing ship and will try to comment about the rules ans models in a future post !