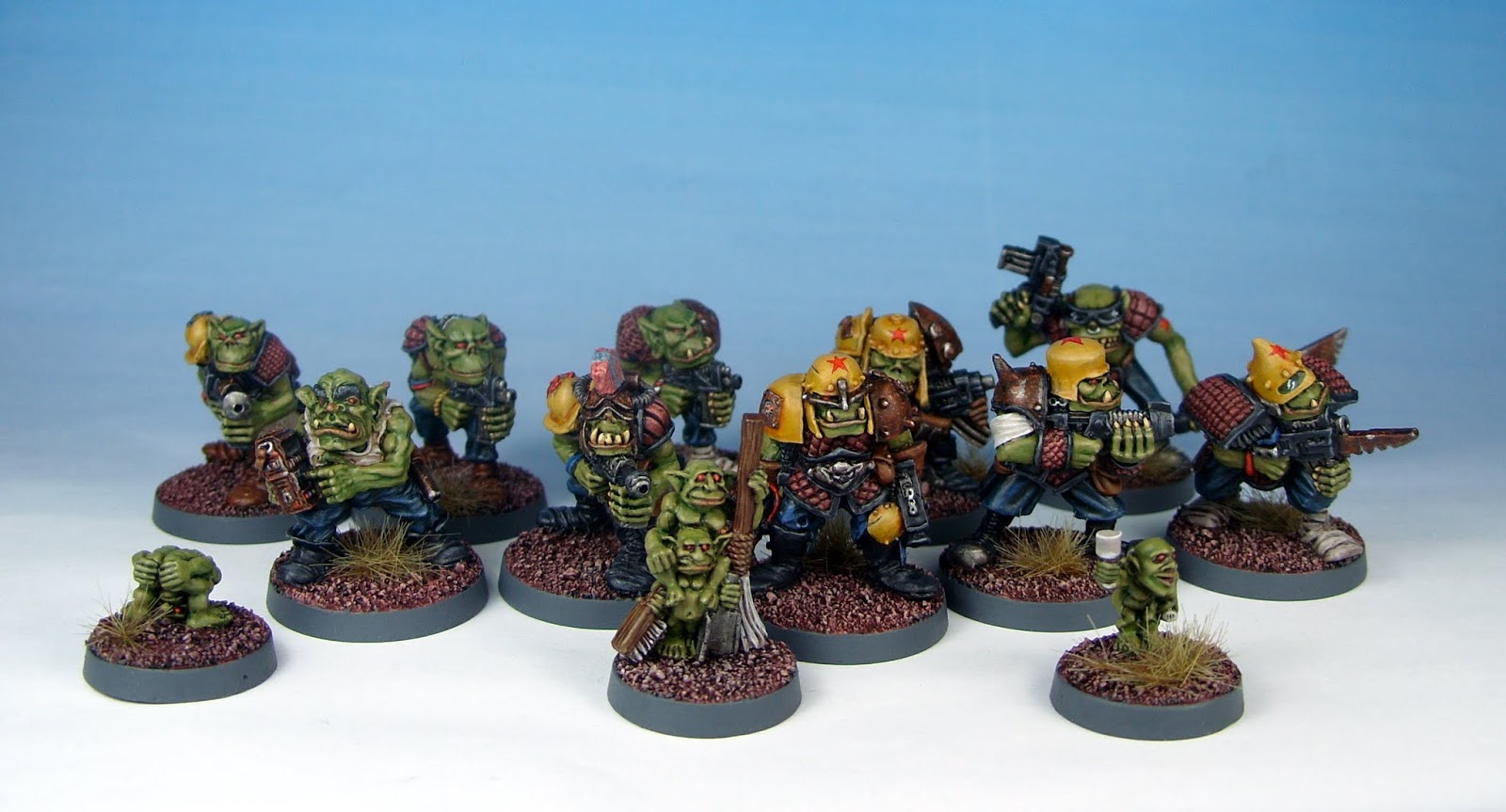 So here we are ! Less than a month after the launch of Orctober, my entry is ready for some action !

As you may have recognised them, I've settled for some Space ork raiders this year. Last year my entry consisted of some orks from the second release of Rogue trader that went along Waaaagh the orks. The reading of this classic piece of background for all self-respecting future greenskin had really inspired me and somehow made me far more interested in them than I ever had before. It somehow sealed a sort of tradition that though I'd never truly collect orcs or orks, I would take the opportunity to paint some once a year.

And that time of year had come again !


Last year's entry was heavily influenced by the look of Warhammer 40 2nd edition and its red predominance.

This year, I wanted to get back a little farther in time to the early days of Rogue trader. What better range of orks than the original Space ork raiders ! 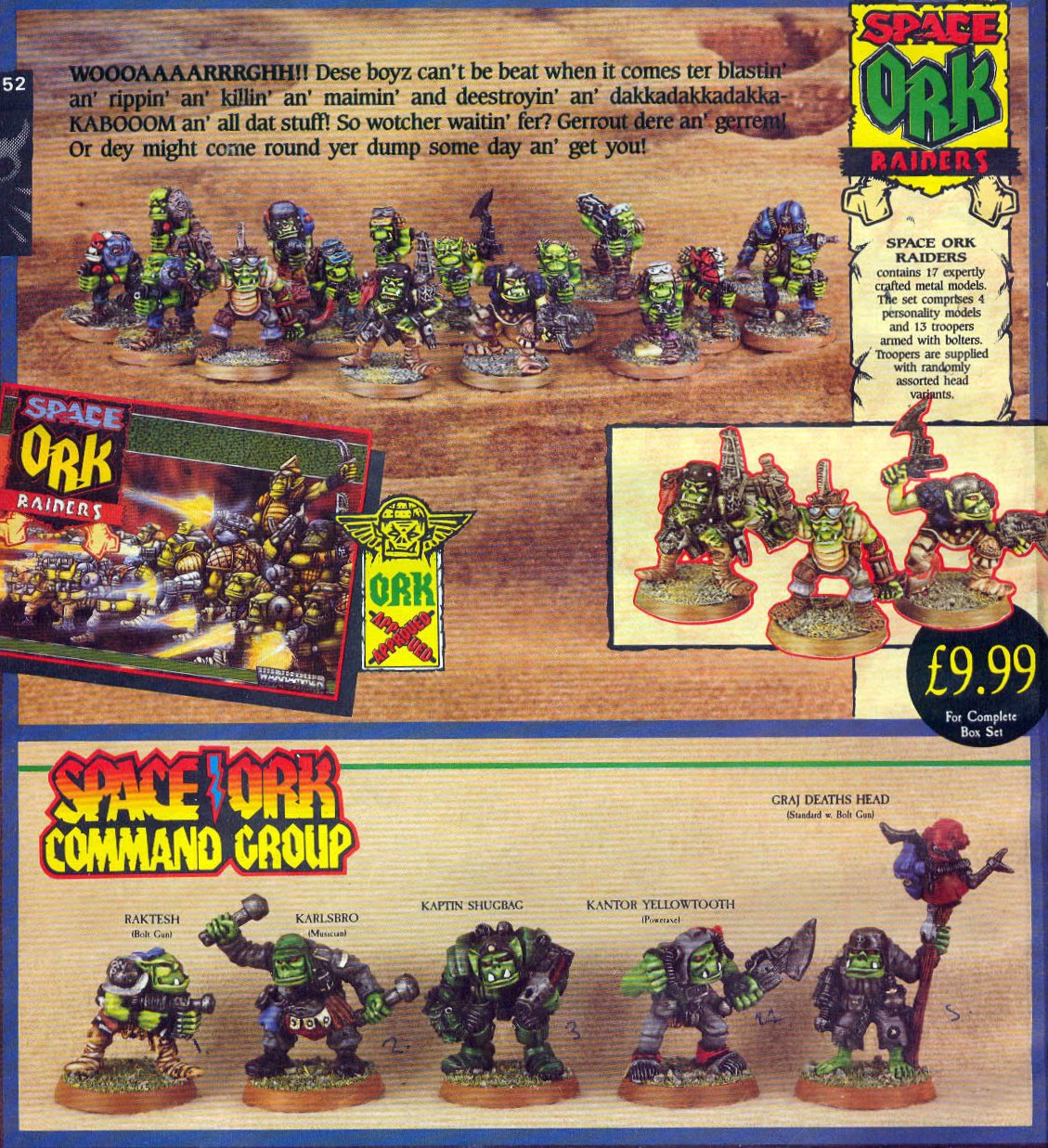 What screams "Rogue trader Orks" more than these guys honestly ! They have just the perfect combo of mischief, savgery and humour !


My selection of models has been done by chance. I just found a thread on the oldhammer forum where Phreedh was selling some of his lead and I just took what he had in hand. Not only was I suprised by the quality of those models but Phreedh even kindly added some more !

Let me present you "that Red Sturz" a group a (in)famous space ork raiders that have made an question of honour to wreck, pillage and cause trouble as much as they possibly can. They generally rent their service to earn the money needed to get to another sector of the galaxy xhere they can stat again their quest for maximum mayhem !

I've tried to associate the orks by pair, so you can compare the different variants when there are some.  The first couple is the most simple one, these are only a worn out jean and some bandgaes on the feet and some salvaged pieces of armour. This does not mean they don't take care of their look and you can note their fancy bracelets and watches ! 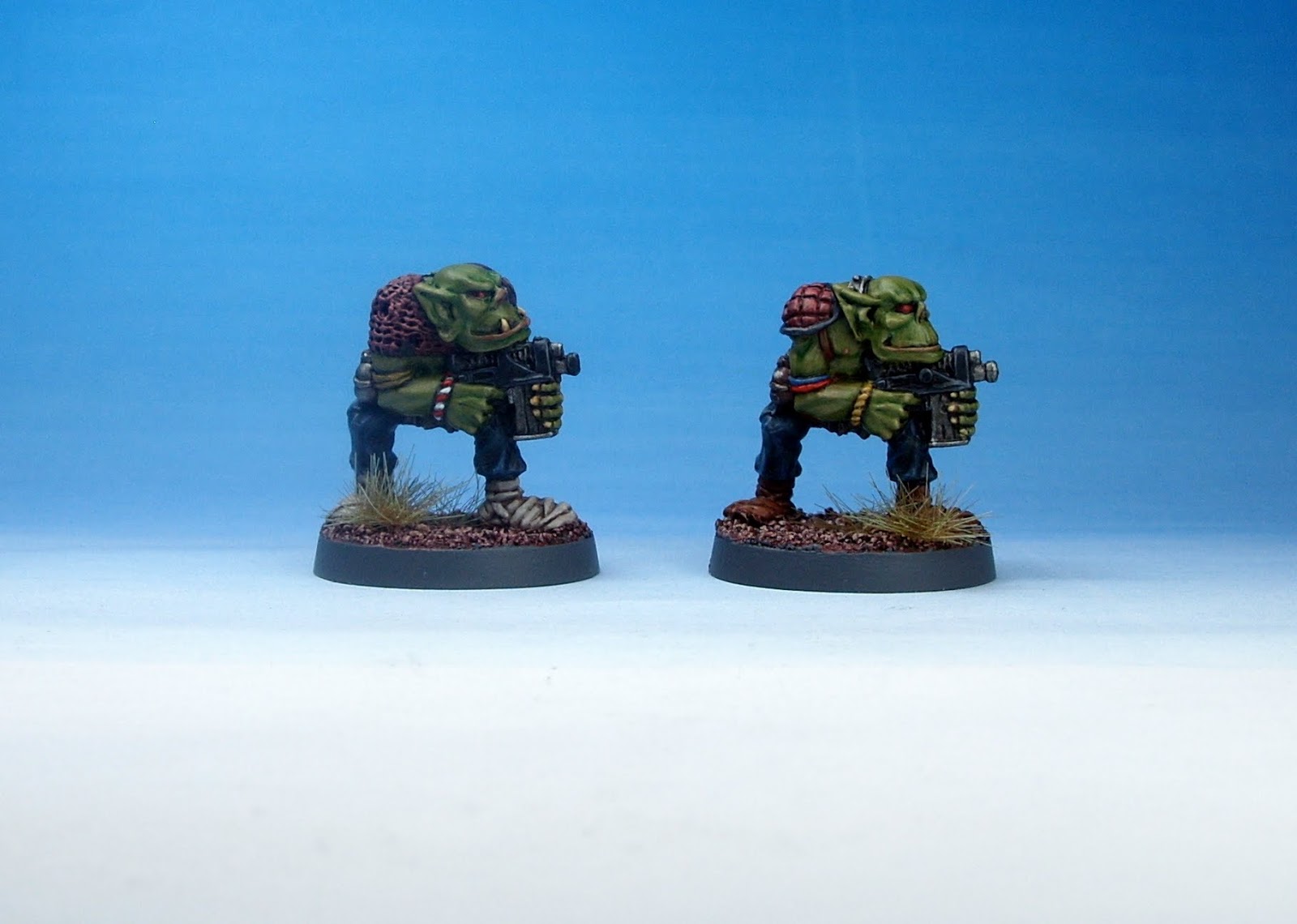 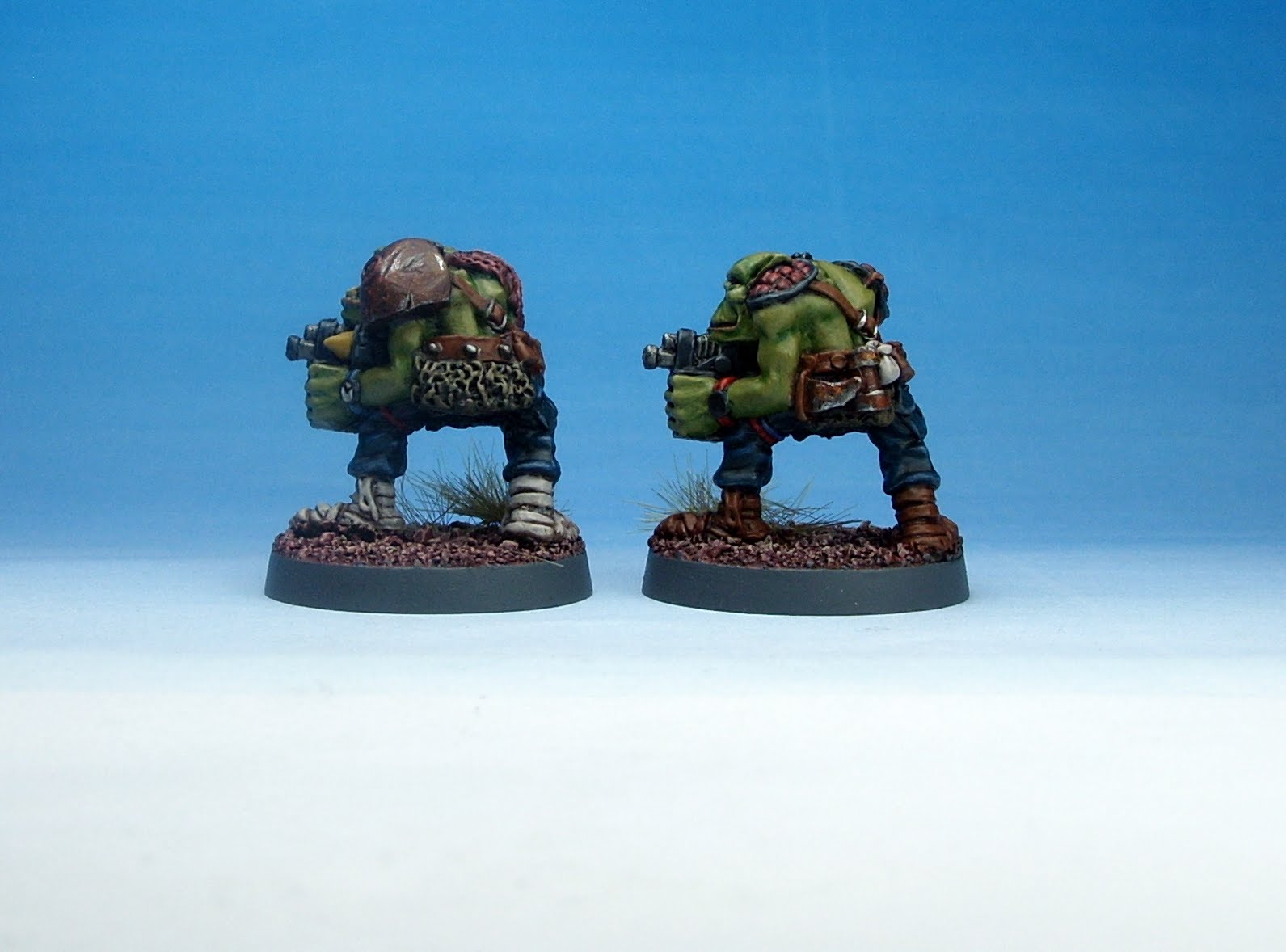 Just look at this classic bit of Rogue trader, That's what orks are all about ! 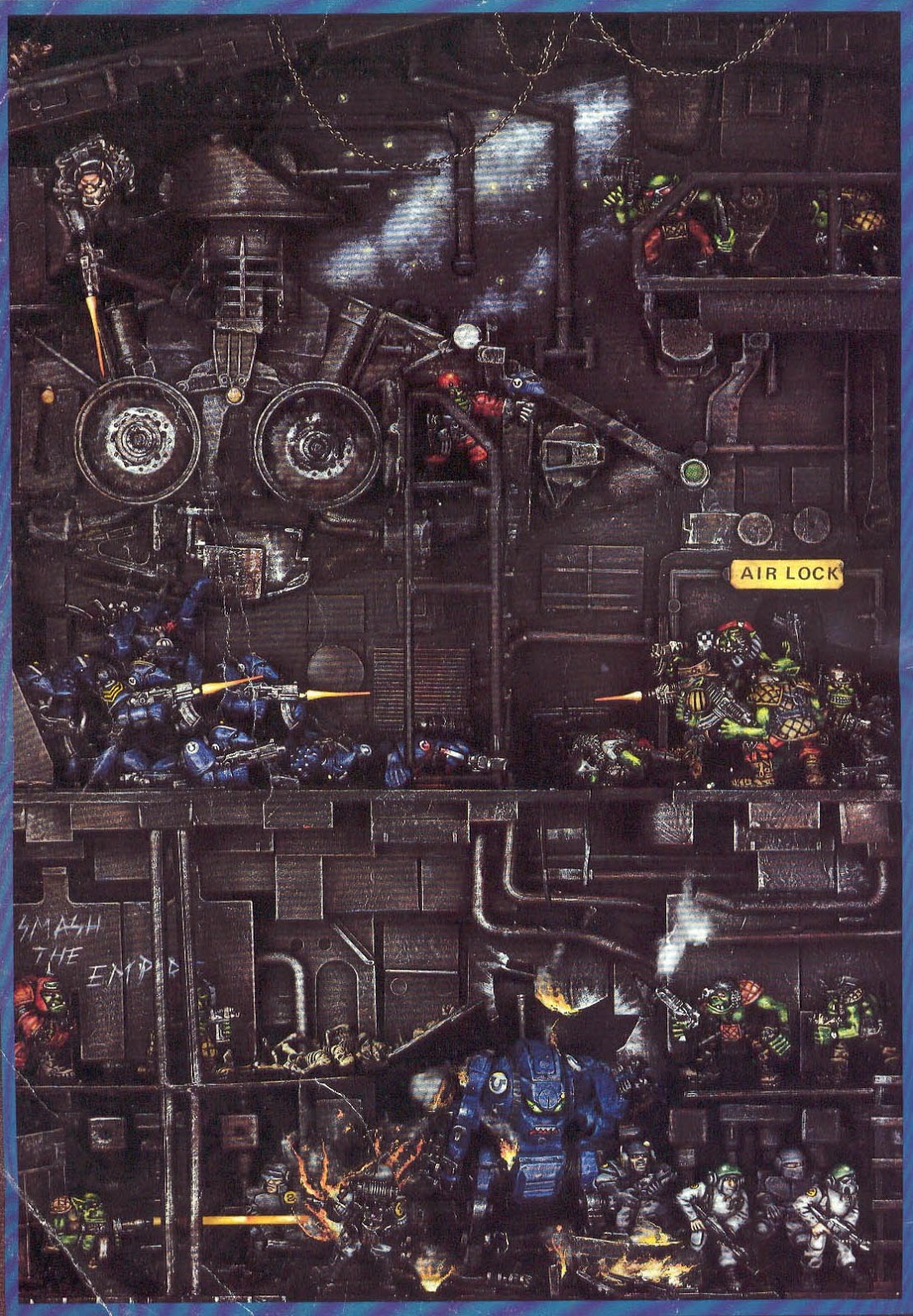 The second couple is by far the grimmest one of the band. The doom doom brothers are the 2 wackos of the group and they seem to be competeing with each other to come up with the most gruesome and stupid ideas. You can see how Tonny (on the left) has had "on top" written on his shoulderpad to prove how he is at the top of the ork hierarchy. Well Borry (on the right) has had "on Ton" written on his... their never ending fights still are a source of fun for the group... 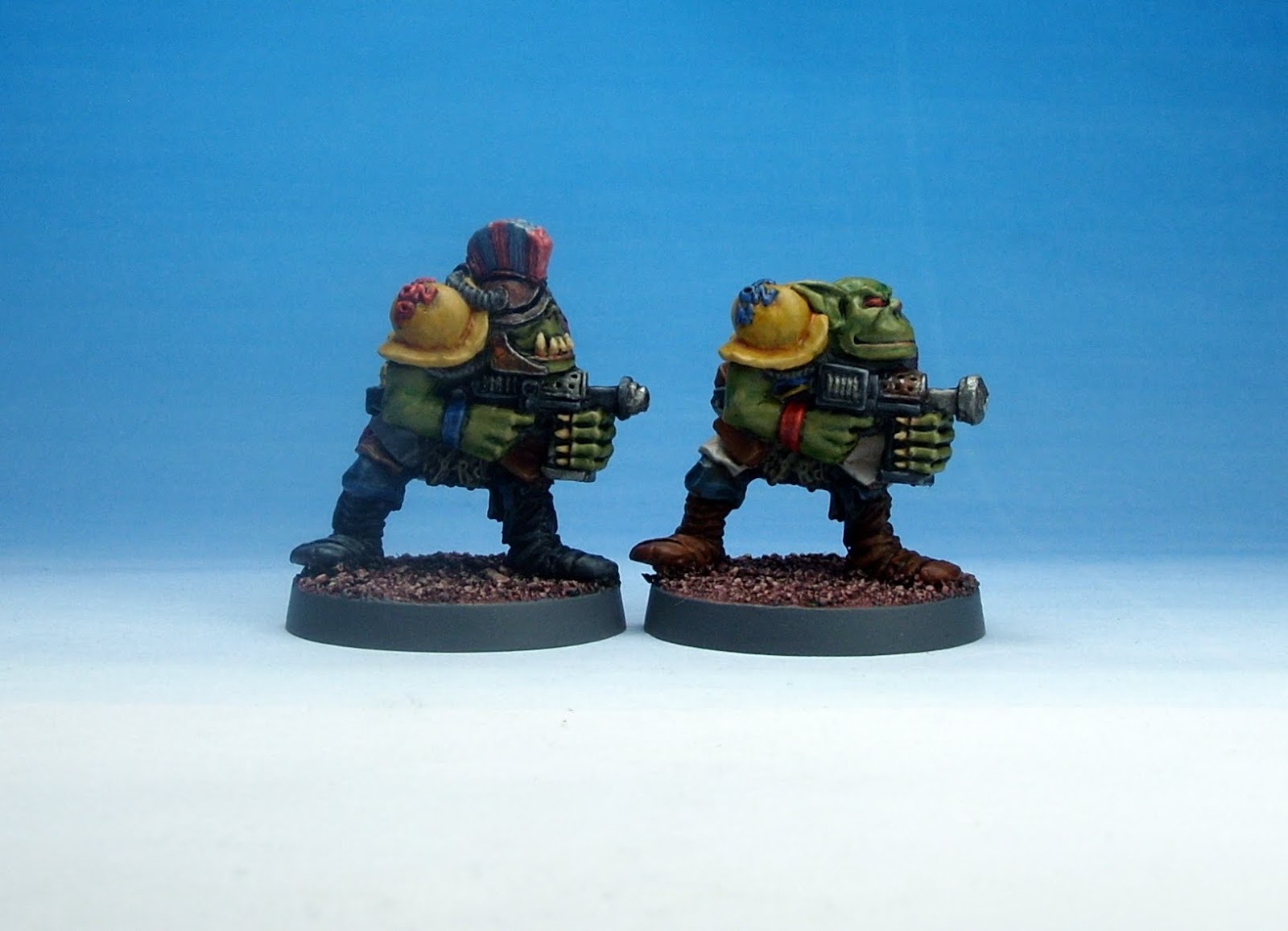 With the followoing 2 we're starting to get a little higher in the hierarchy of our little group. Well armed and equipped, skilled in combat and eager to kill, those 2 cold very well be th eworst threat to mankind ever if it were not for their VERY short attention span... Do not let yourself be fooled by their look of professional,  give them an order and you can be sure that 5 minutes later they'll be doing the exact opposite (though they will keep firing their bolters the whole time). 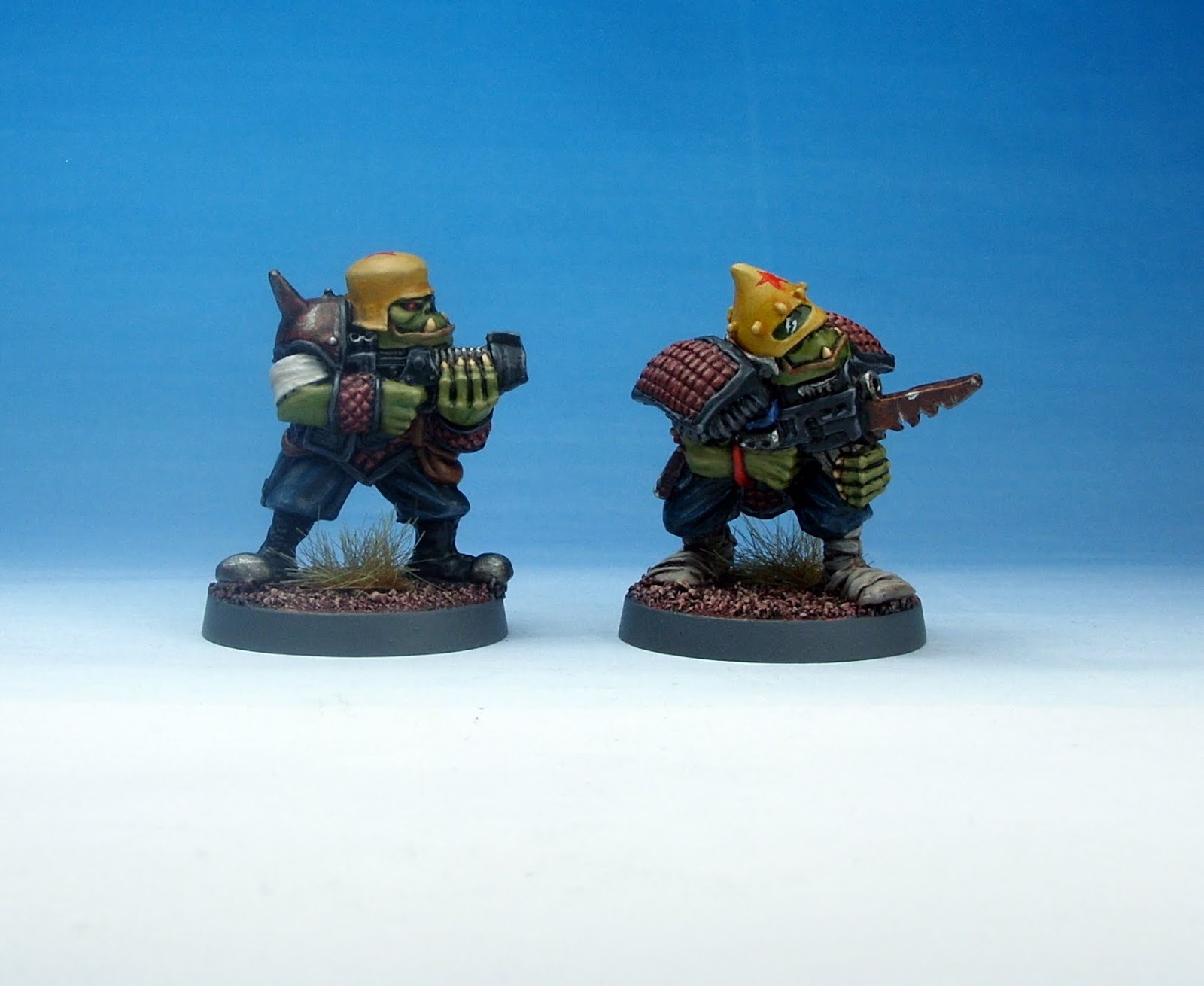 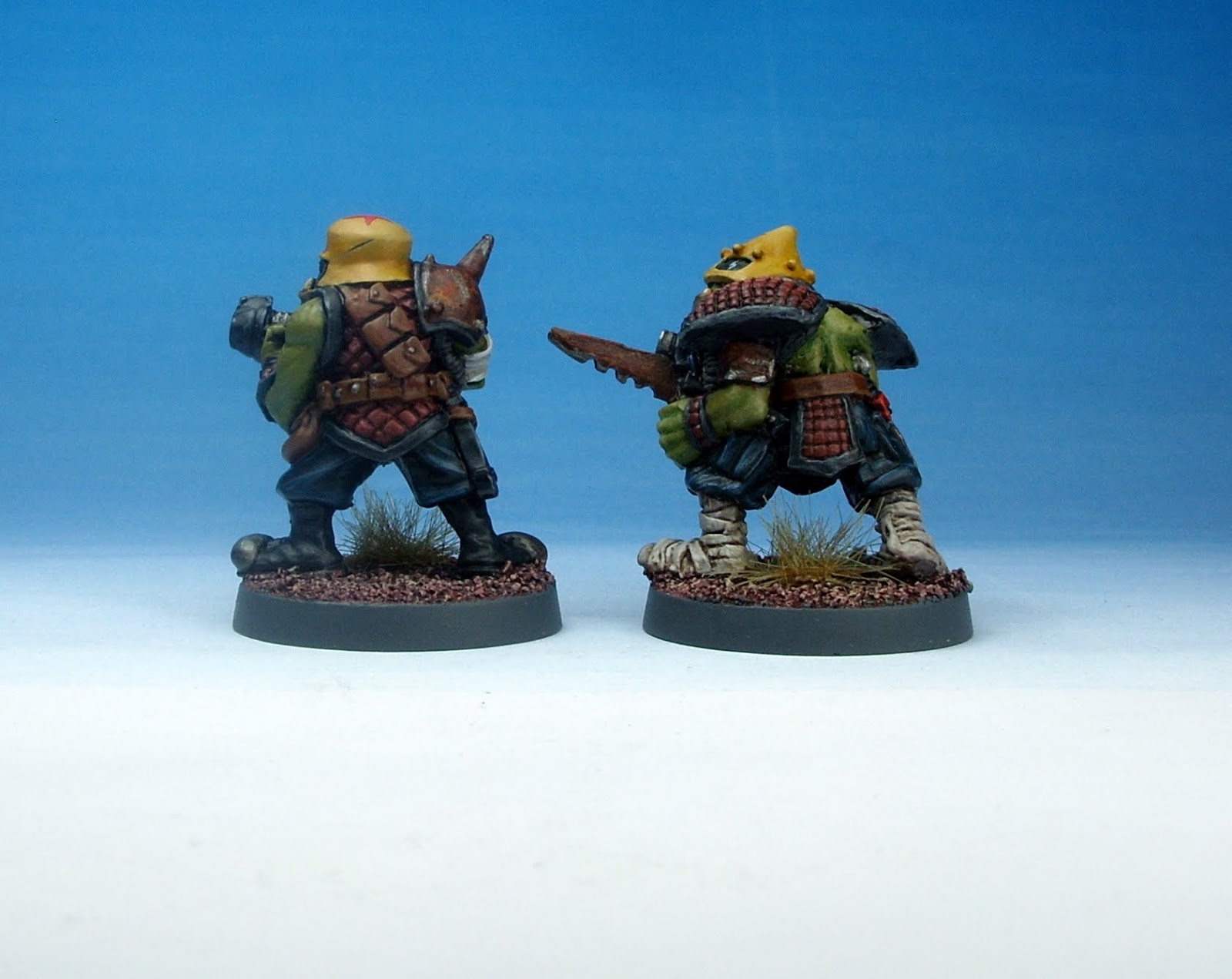 Now here we reach the top of the food chain, the cream of he crew if I may say... the Breaka Brothas.
They're mean and... mean, they're just mean. They may look focused and clever at first sight but it only takes seconds to realise that the only thing in those stupid minds of theirs is to cause trouble. Because they dedicate the full extent of their very limited intellectual ressources to be mean, they need armour, tough armour. It seems that this combination of resilience and dedication to their cause has somehow protected them from anihilation and you can be sure that would they be torn in parts, they would still be aiming at causing you trouble... 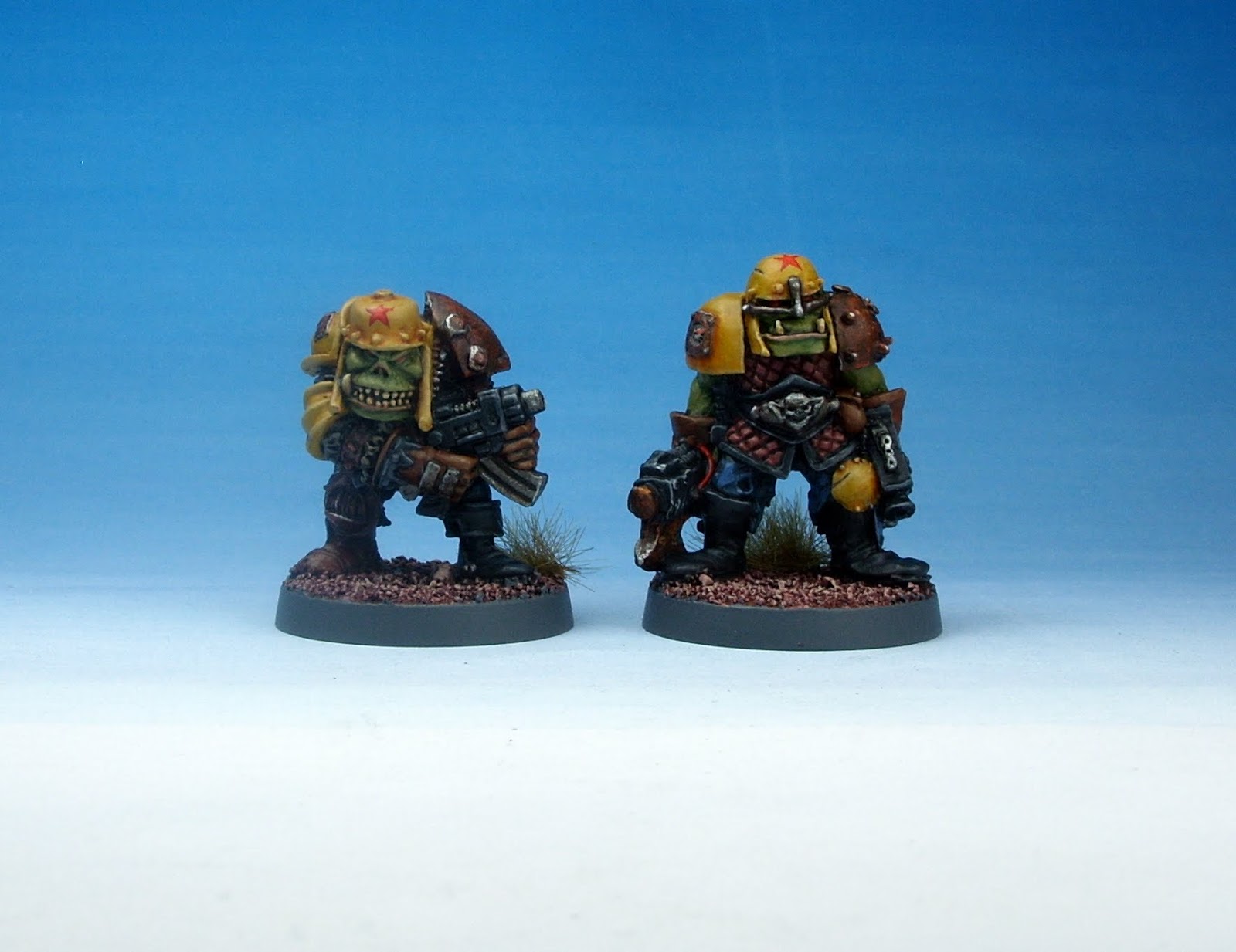 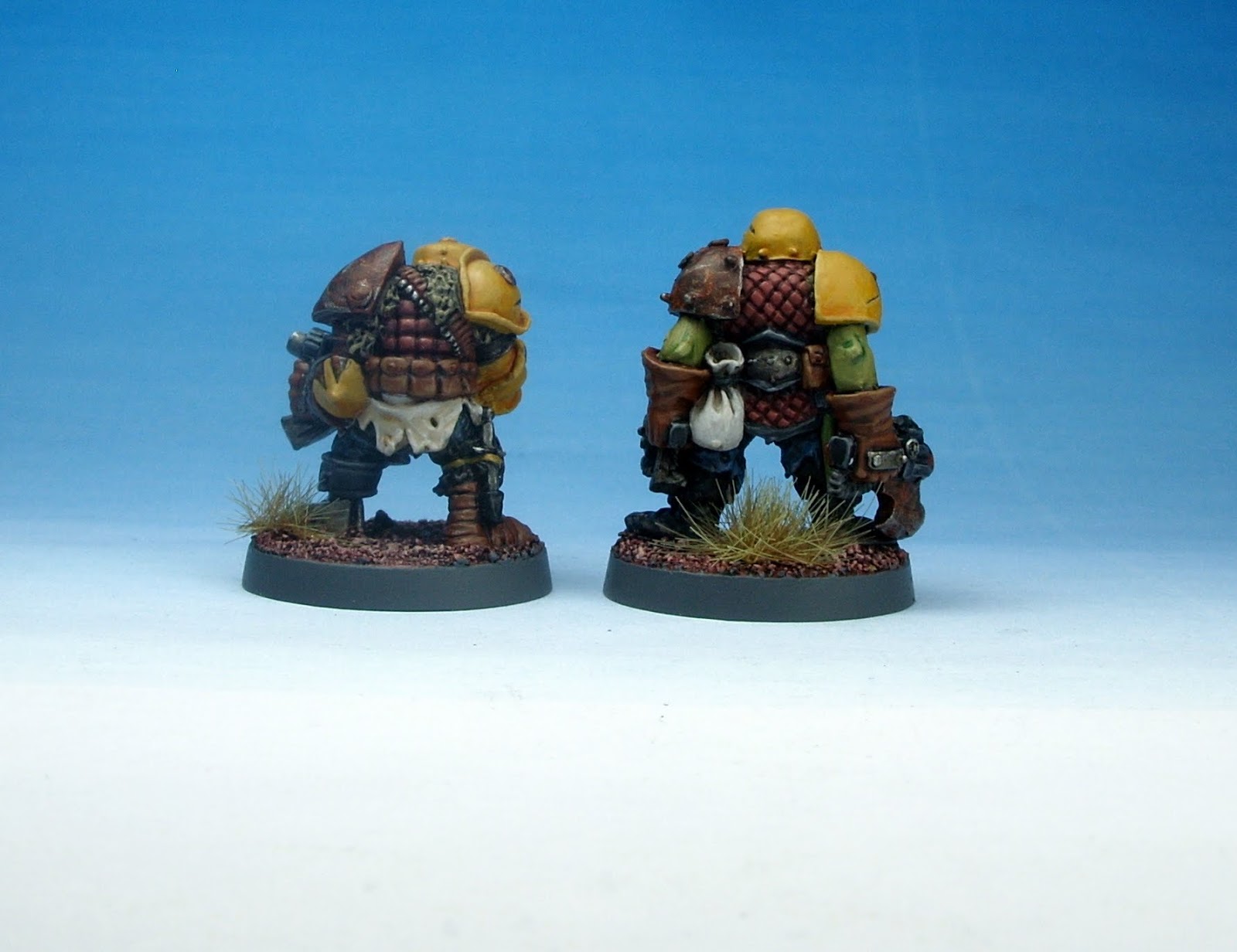 Last but not least, here are our specialists. On the left you can see Dork Dougy, also known as "Little Genius"by the rest of the crew. He is the one closest to having a form of intelligence in the group and he acts as mechanic, medik and all... he fixes things with skill from time to time, with headbutts far more often and with point blank shots with his automatic gun most of the time... This temper of his probably find its origin in his short and bulky build but most crewmemebers know better than to tease him with that, you don't want to mess with the Dork...

One little detail about him is that to gain some assurance and some credibility, he has somhow decided to sport a pair of fat squig eyebrows. His companions don't know why but he is certain tha tit gives him a more "scientific" look... once again, you don't wan to mess with the Doc (especially when he's holding a gun

On the right, you can see Rorky, the pilot of the group, he can pilot or drive anything and when he can't he will do it anyway... 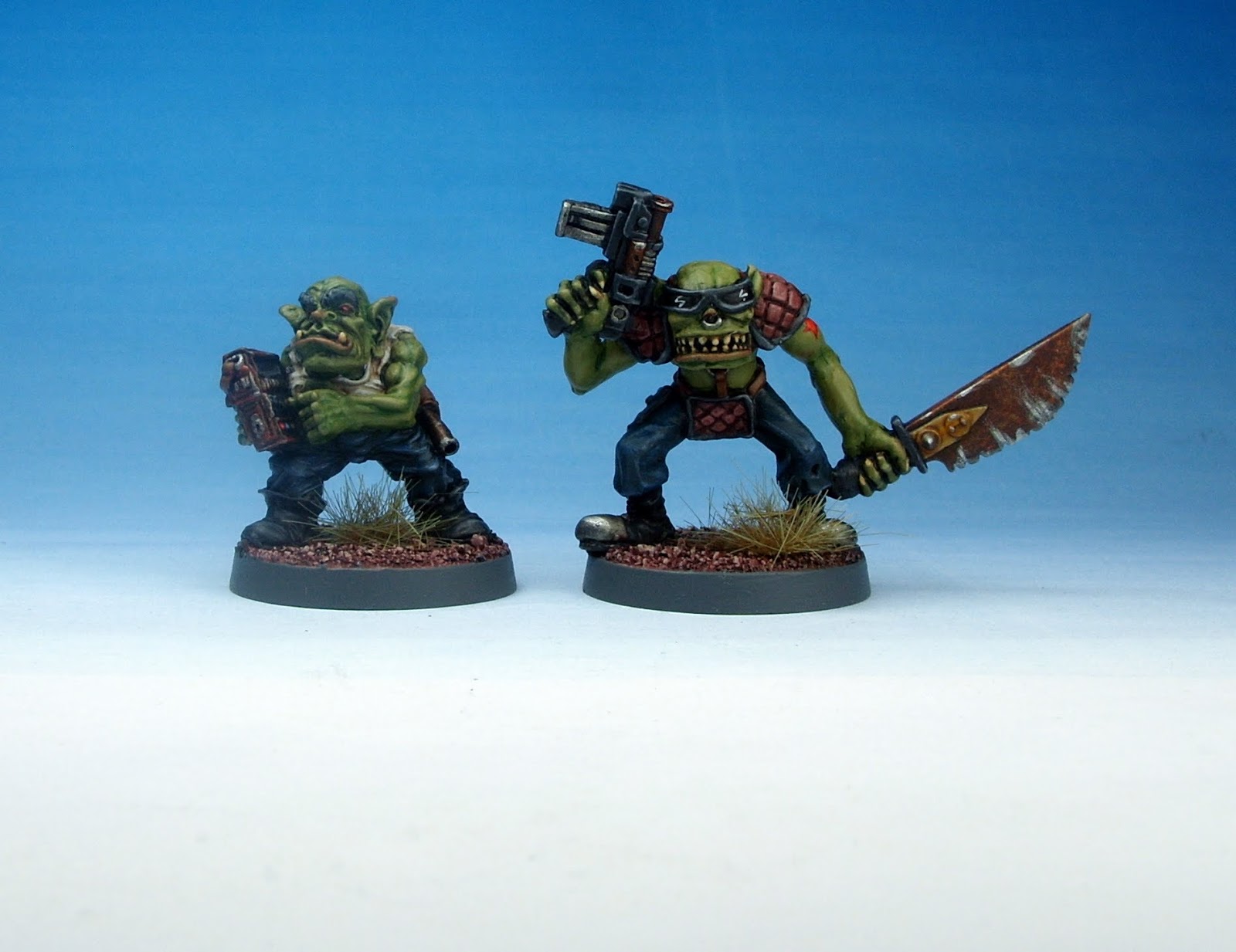 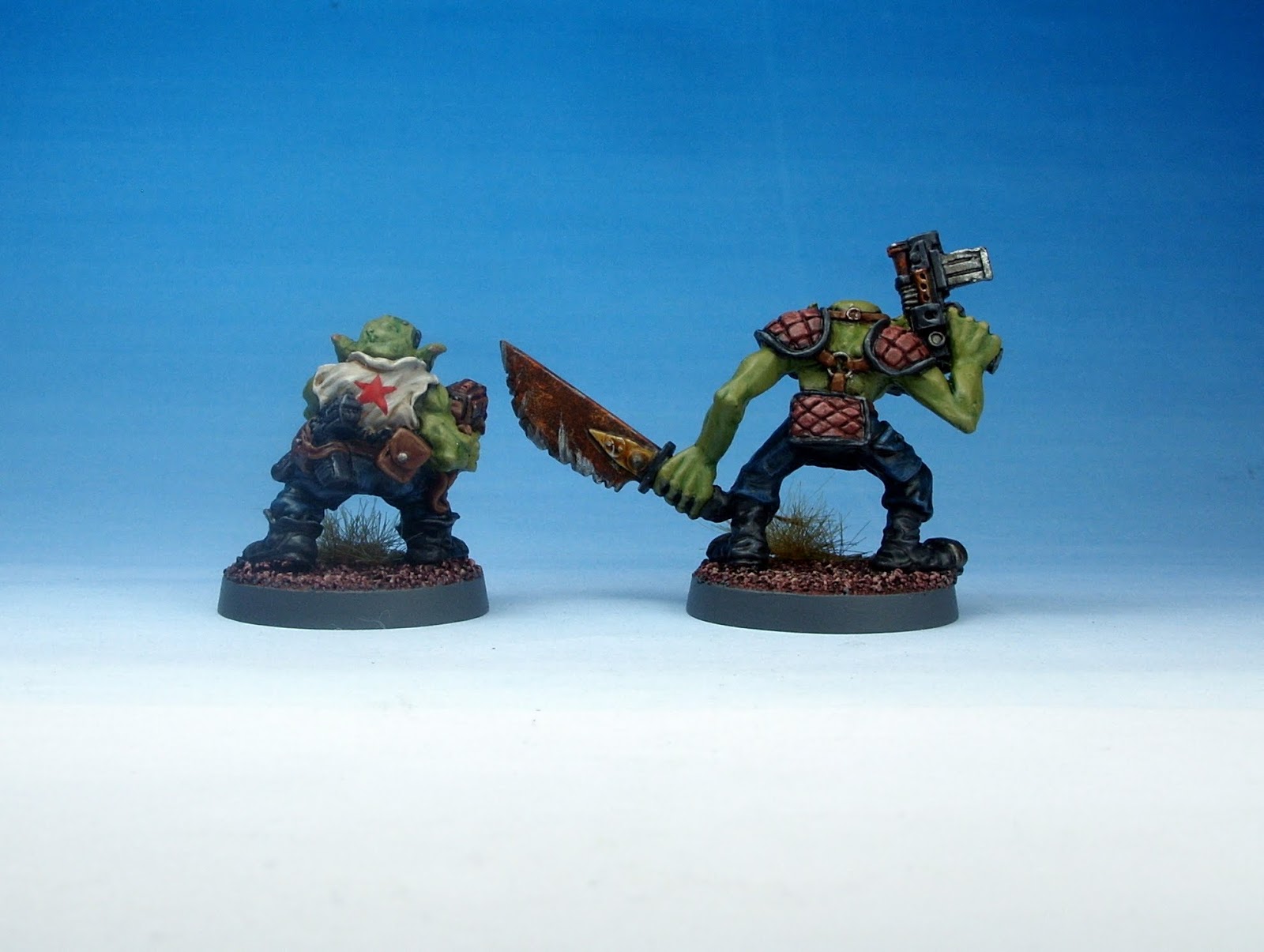 The group travels the galaxy with the company of snotling slaves which may very well be even more stupid than their masters. Most snotlings are said to be the clever lot of greenskins (by others than orks) but those are the worse you can find, maybe it's the way of piloting (and landing) of Rorky, maybe it's the way the Dork heals them with gunshots or maybe it's just living amongst of wackos that influences them but they're really really silly.
By the way, those below are all models kindly offered fuy the foundry when I purchased models during BOYL.

So here they are my first gang of orks ! I'm really looking forward to painting some more snotlings because I have a little scenario in head that could use soem and be really fun... 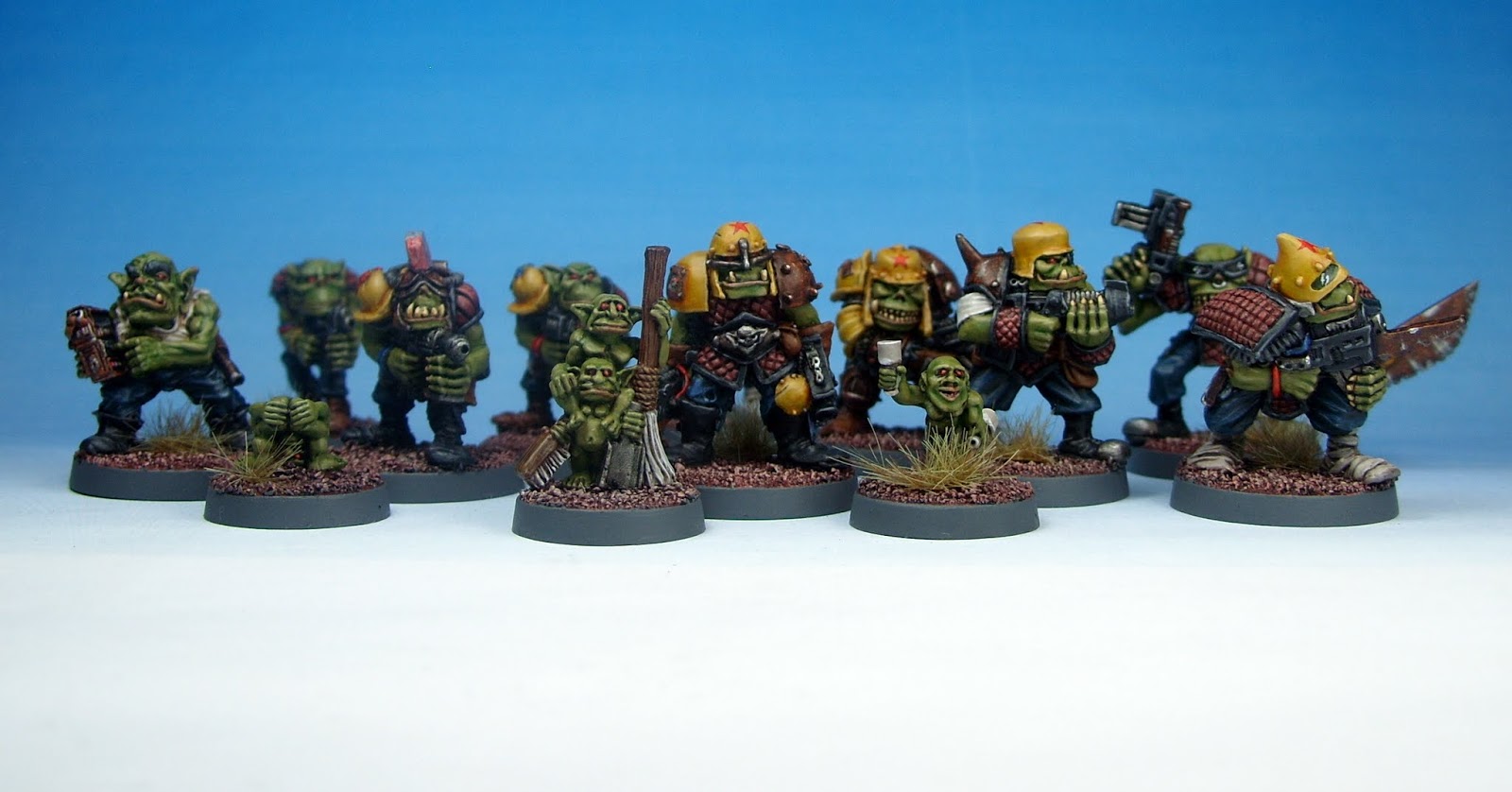 Hope you like them, I took a lot of pleasure painting them. Since the orks are sort of a unique thing every year, I wanted them to be special, I worked on an ork skintone and I think it looks cool. I also wanted to get out of the comfort zone so I opted for lots of yellow to worl that colour a bit.I can't say the result is where I wanted it but it's good enough for the purpose. (Anyway I'll get back to my usual palette very soon).

Tempted by orks? no? Come oooon, if you're not, just let yourself be tempted just once in a while ;)
Publié par Asslessman