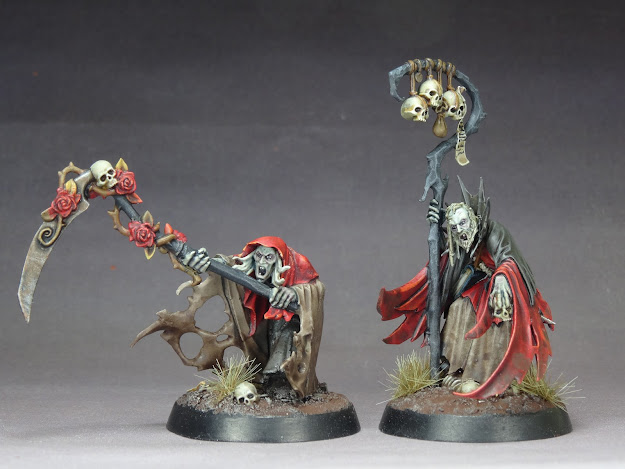 Hey everyone, so little side step here as I took the opportunity to join a group challenge and clear the desk a little !

When Warcry was released, I didn't feel like starting a fresh new band and the ones that I fancied weren't released yet so I thought the smart thing to do was to build on top of my sepulchral guard, I just needed a necromancer (quickly bought and built) and a few more skeletons (quickly built from kits I had around) and that was the promise of great things. Fast forward a few months, world pandemic and all the stuff you know and I hadn't touched any of my additions when Sho3box offered a joint challenge for us to each paint a couple of wizard/apprentice in anticipation of Frostgrave Season 2.

That's when I realised I could just paint necromancer and :

- Have an entry for the challenge

- Have a couple of wizards for the new Frostgrave

- Have actual necromancers for my undead

Well that felt like killing a flock with one stone so Off I went,

Of course I needed another necromancer but hey ! 10 years ago me had had the brilliant idea to convert one from the spare parts of a corpse cart.

The kit comes with 2 variant riders sharing the same back so I just copied the back part with instamold and resin and with a little weapon swap I had a cool new necromancer : 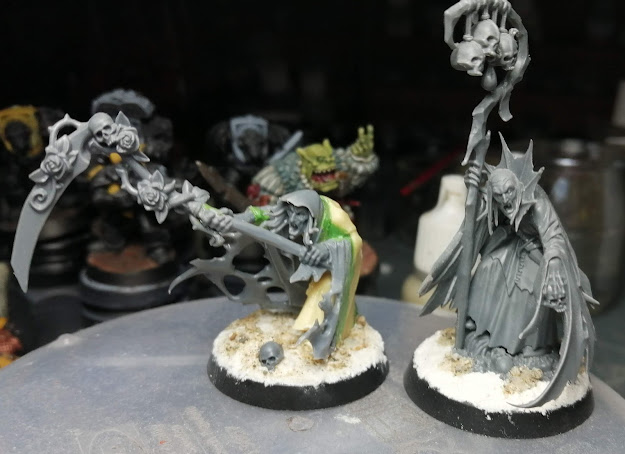 Painting wise there were 2 constraints, the first being to make them match all my iver undead, easy, the other being to take my fingers off and hurry up because I was very late to attend the challenge !
So I ended up rushing a bit, not adding as many nuances or details as planned but done is better than perfect and that has made the wheel roll again which is the main thing.

Now I'm super glad to have the core of a band ready and I just have a fist full of skeletons left top paint to have a proper Warcry band !

Now of course, this wasn't intentional (just my subconscious maybe) but I've actually made my undead band a couple thing with both vampires and Necromancers coming in couples ! (Not eager to see the kids though). I'll spare you the Zombie couples, definitely NSFW and just simply NS.