The scythes of the emperor - Space Hulk Terminator force 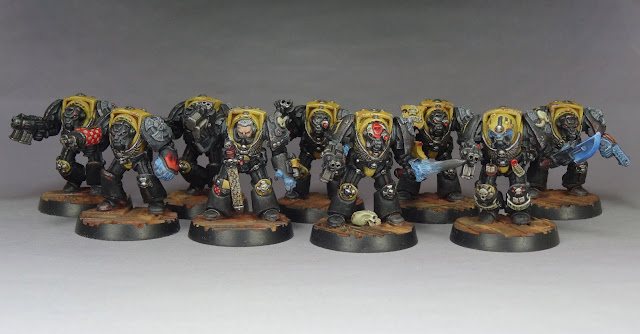 Just so that I'm honest with you, I've only come late to Space Hulk. My real first was actually when I played at my friend Sho3box's.
Now the game really pressed my buttons and I really liked the self contained nature of the project. Of course, like most sane people, I've wanted to have a 3D space hulk but I guess that could be arranged pretty easily with modern kits now. I've also realised many of my friends were into it so making my own force to have the opportunity to play it every now and then could be fun !
So just put this album, the intro is probably the most accurate rendition of how a Space Hulk sounds like and just dive with me !


Now of course, the first question that will arise to any person about to paint space marines is : "what chapter/colour scheme ?".
It's a valid question. Well for some reason the scythes of the emperor (and not the emperor's scythes) have always held a special place in my heart, perhaps not because of their colours but  more because of the doomed chapter thing and because like often, they were served by iconic artwork :


Just look at the pic above, and dare tell me it's not the best of both worlds between Alien and 40k, right ?
Also, Do you see terminators with baby feet standing on blue metallic garage doors or just regular blue laser placenta ?
Oh and by looking around for more knowledge of them, I came across a pretty cool explanation of the whole Scythe and horse thing about them on this excellent site. 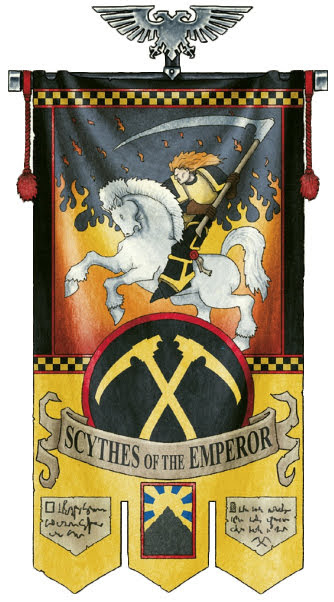 Now I'll be honest here, ANYTHING that puts this brilliant song into my head gets a massive approval from me :

So we were settled on the chapter, not that I like paiting yellow but sometimes you have to follow your heart and not your lazyness.
On the other hand, there was one thing I knew and I was pretty sure I didn't want to paint them in the old colour scheme which looked ... old.
I think the updated colour scheme is pretty excelennt and pleasing visually so this was perfect ! 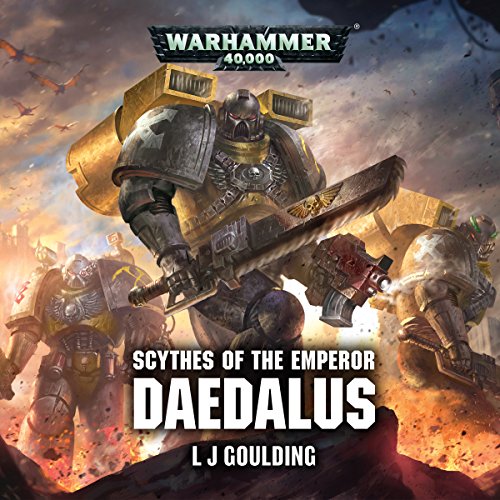 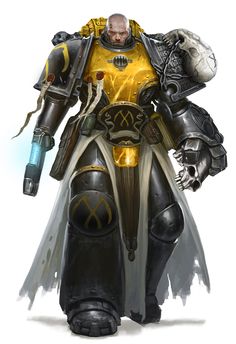 I also had to select the models, now this was much easier, I'm a Jes Goodwin fan so I could only paint his terminators and I had to paint his first and not the round shouldered ones obviously ! I quickly tried to determine what number of terminators I needed and which equipment to get and Oh surprise ! The answer was basically the content of the RTB09 ! 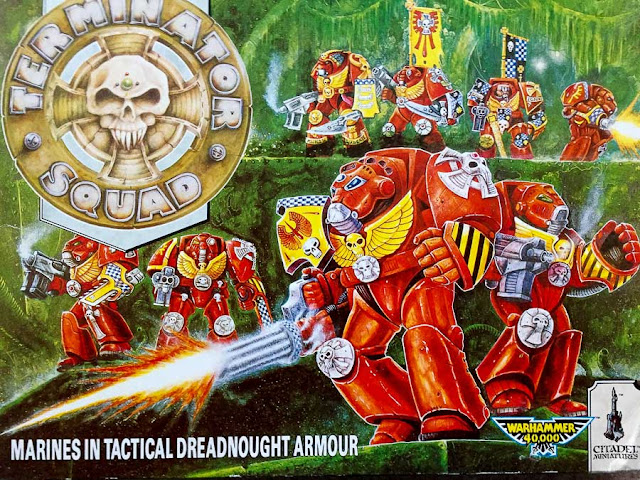 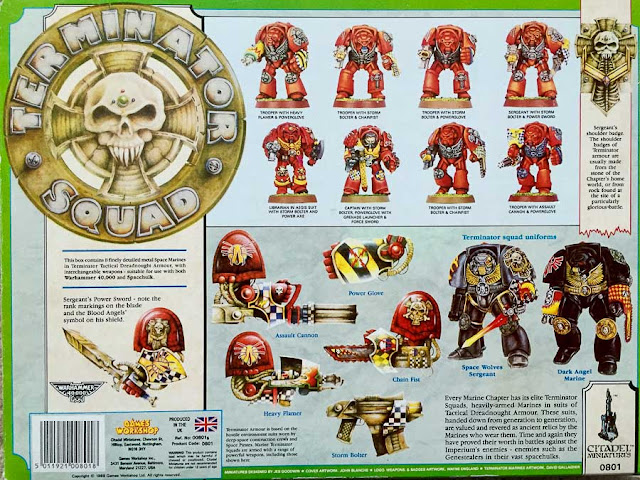 Now I knew from painting my chaos terminators that the poses could greatly be enhanced by pinning the arms and bending them here and there to emphasize the slight dynamism and realism. Of course, terminators should be running or doing backflips but a little posing goes a long way I reckon to make them even more pleasing while keeping that sense of humanoid tank.
I also knew 30/32mm bases are the best compromise for old terminators and I immediately knew my 32 Necromunda bases were just what I needed to fully set the scene. 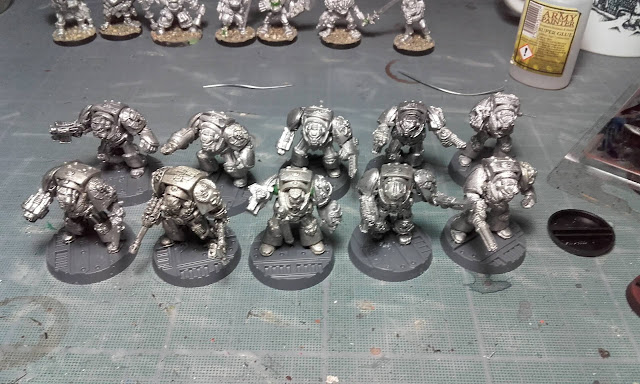 A bit of green stuff work and a zenithal undercoat later, I was ready to start the painful process of painting a two part scheme with black and yellow (making me seriously reconsider for Blood angels). 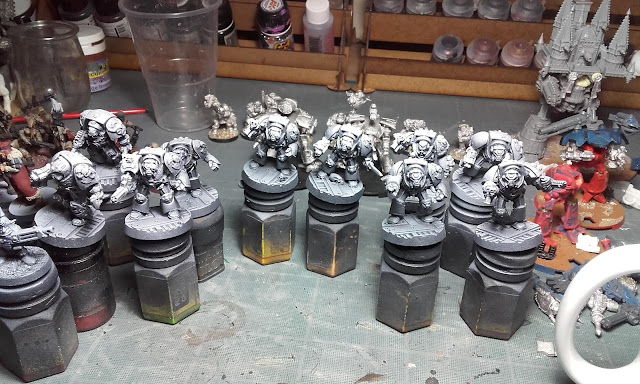 So the real painting could start ! Painting black and yellow aren't exactly the easiest colours around and I was really pleased until the weathering part. Now I couldn't bear the idea to have pristine looking terminators but I think they really lost a lot of contrast and readability in the process so I'm not entirely happy with the outcome if I'm being honest here...


The 3 characters are all great and a little twist in the arms to open their stance with the sword/halberd goes a long way like raising the bolter up to give them more realism. 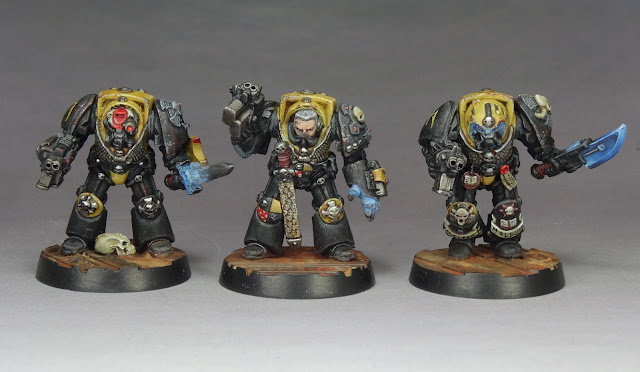 For some reason I'm an absolute fan of the minigun model, his pose and shield make him a proper bad ass but I know flamer boy will be a great asset in game (that damn first scenario) ! 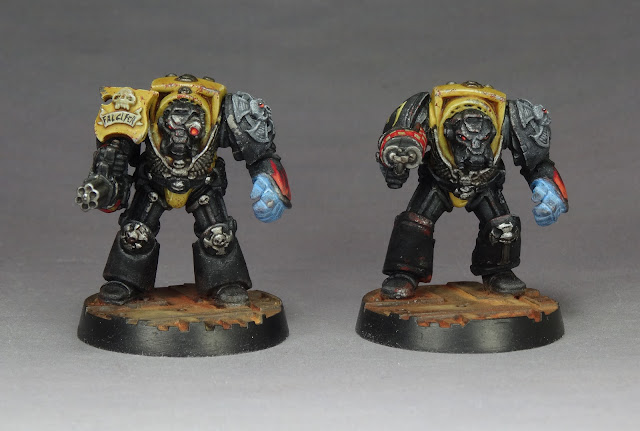 Then we have the Morituri's ^^ 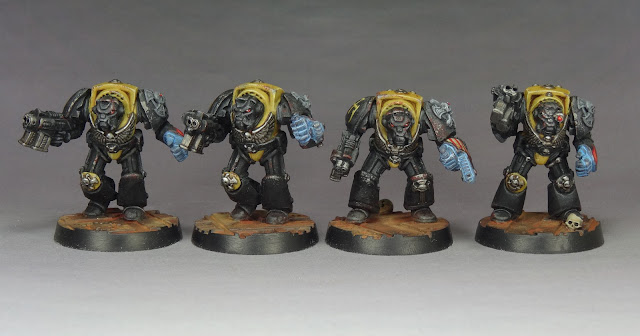 Since I picked the modern scheme to paint them, I thought adding freehands was necessary for some good oldschool vibe !

Of course this is what I'm realling looking forward to : 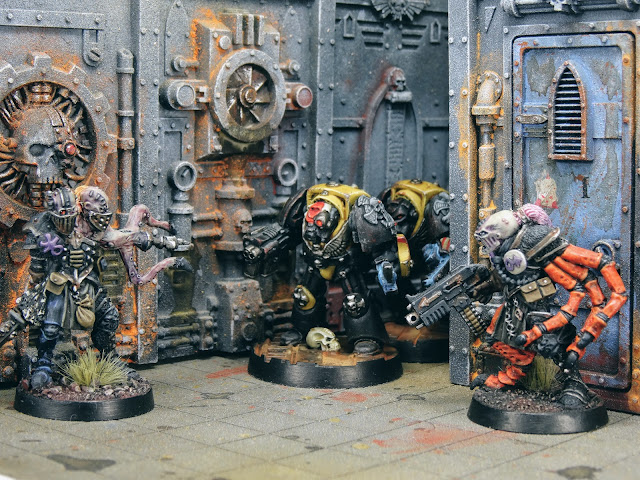 Now, what did I say again ? Oh right, I love self contained projects. Having no more than 10 of the 32mm Necromunda bases was just perfect to prevent the projects from going anywhere else... I only have 25's left and I'm not putting a terminator on them... 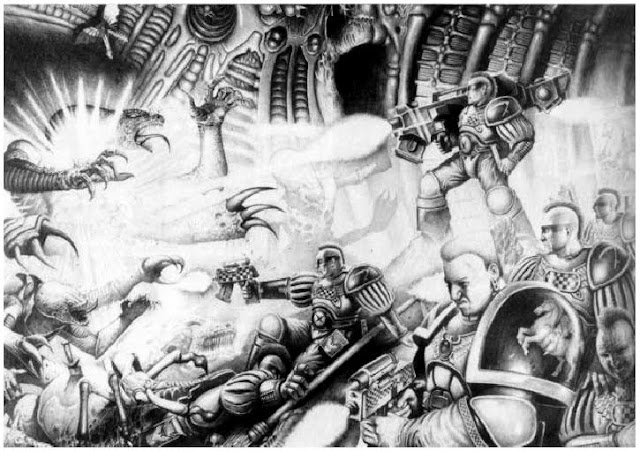 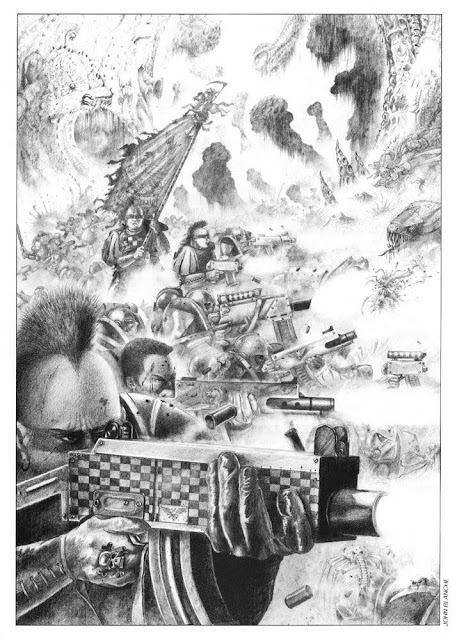 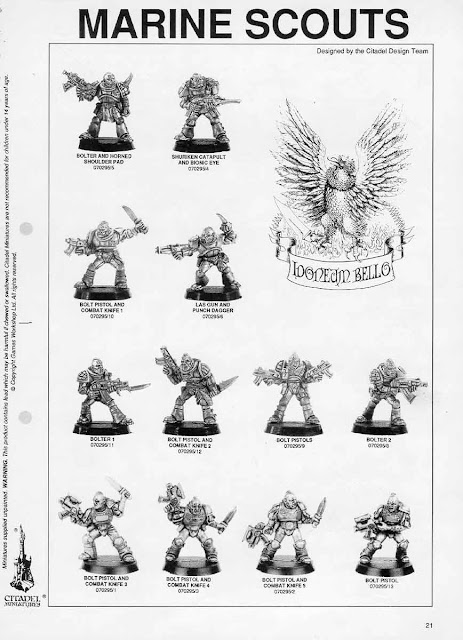 Only 10 of them (I would need a heavy bolter though...


Well we'll think about that later... I guess.
Good thing my buddy NIco is taking care of the terrain for our coming game but I'd be quite keen to play some hive infestation actually ^^