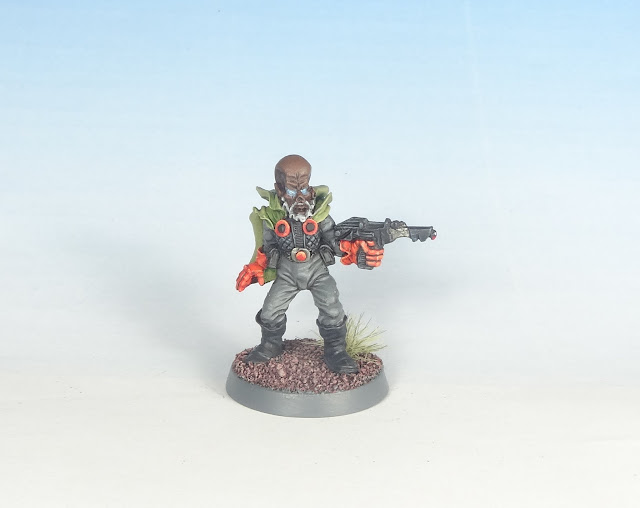 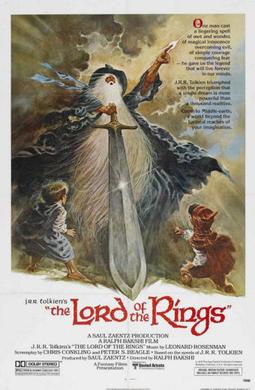 Mighty and wise as Gandalf (perhaps the most evocative wizard with Merlin), that was something I could use. The model comes with very peculiar facial traits :
- The nose is almost inexistent
- The ears are different from one another (one is pointy à la Spock and the other human like...)
- the chin and cheeks are surrounded by a crest that doesn't look like how Bob usually sculpts beards so I suppose it's meant to represent mutations...
- The head is obviously enormous but that's the distinctive sign of psykers once they've reached a certain level it seems (though you don't see this on Marine psykers...)

I decided to ignore the first point to focus on the others. I painted the strange crest as a beard to echo the traditional wizard's beard and I gave him blue glowing eyes to contrast with the dark skin tone.

The rest of the painting was also an attempt at using different colours from my usual palette of blues, whites and reds. I wasn't sure about the orange/green combo but I wanted to try it anyway. To avoid it to be too painful for the eyes, I desaturated the green and kept the orange on a few parts only, leaving most of the model in shades of grey. A slight glaze of blue was thrown on the darkest grey to give it a bit more vibrance and to contrast with the warm orange. I think it worked quite well and I'll probably taint my blacks and greys in the future to add a little something when I can.
The colours do give him a sort of superhero (or supervillain) look but I quite fancy it ! 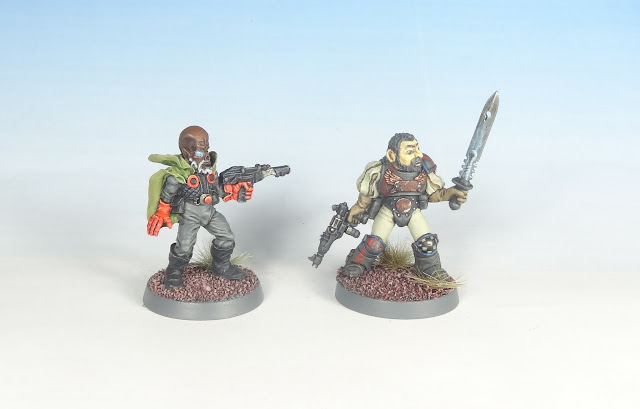 I'm happy to finally have a psyker to oppose to my favourite witch hunting bounty hunters ! Now I have one third of the complete group, I should probably be thinking about the rules and scenery a little more... 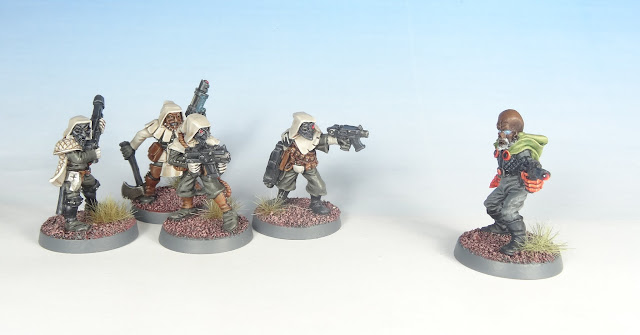 For the time being, I invite you to wait for the 4th level of this little journey at Magpie and Old lead !

And if you don't have enough of Rogue Quest, you can follow Alex's Excellent Lead Balloony. It seems he was enthusiastic enough about our project to have a go at it himself !

Go check his blog and get 50% more Rogue Quest !

Next post, I'll come back on some of the models I painted for last WE's rogue trader game. I finished them just before the game and couldn't blog so you'll get to see them after they've actuall y had some action for once ! ;)
Publié par Asslessman